When A Picture On Instagram Catches The Eye: The Orodeus Sea Odyssey

Scrolling quickly through my feed had me hitting the brakes on this unique watch
Michael Stockton
comments ...
Share

If you’ve read a significant number of my articles, you’ll know that microbrands aren’t my typical focus. I have nothing against them at all; they simply aren’t where I look first. However, every so often something comes along that piques my interest. A recent example of this is the Orodeus Sea Odyssey.

Several months ago, I was scrolling through my Instagram feed. The normal wrist shots came up as well as a bunch of stills. Then, I stumbled upon a post that showed a magazine article with a watch on one of the pages. It was from someone I follow, @analoglust. His feed was showing an excerpt from Esquire that discussed independent watchmakers and the small microbrand distributor he co-founded, Watch Wonderland. Minxiang Yang no longer works with Watch Wonderland as he’s now off designing his own watches. However, it was a watch that he used to help distribute that caught my eye. That watch was the Orodeus Sea Odyssey and after a bit of communication, one arrived at my doorstep for review in Germany. A big thanks to Minxiang for his help as he still has a great relationship with his former employer. 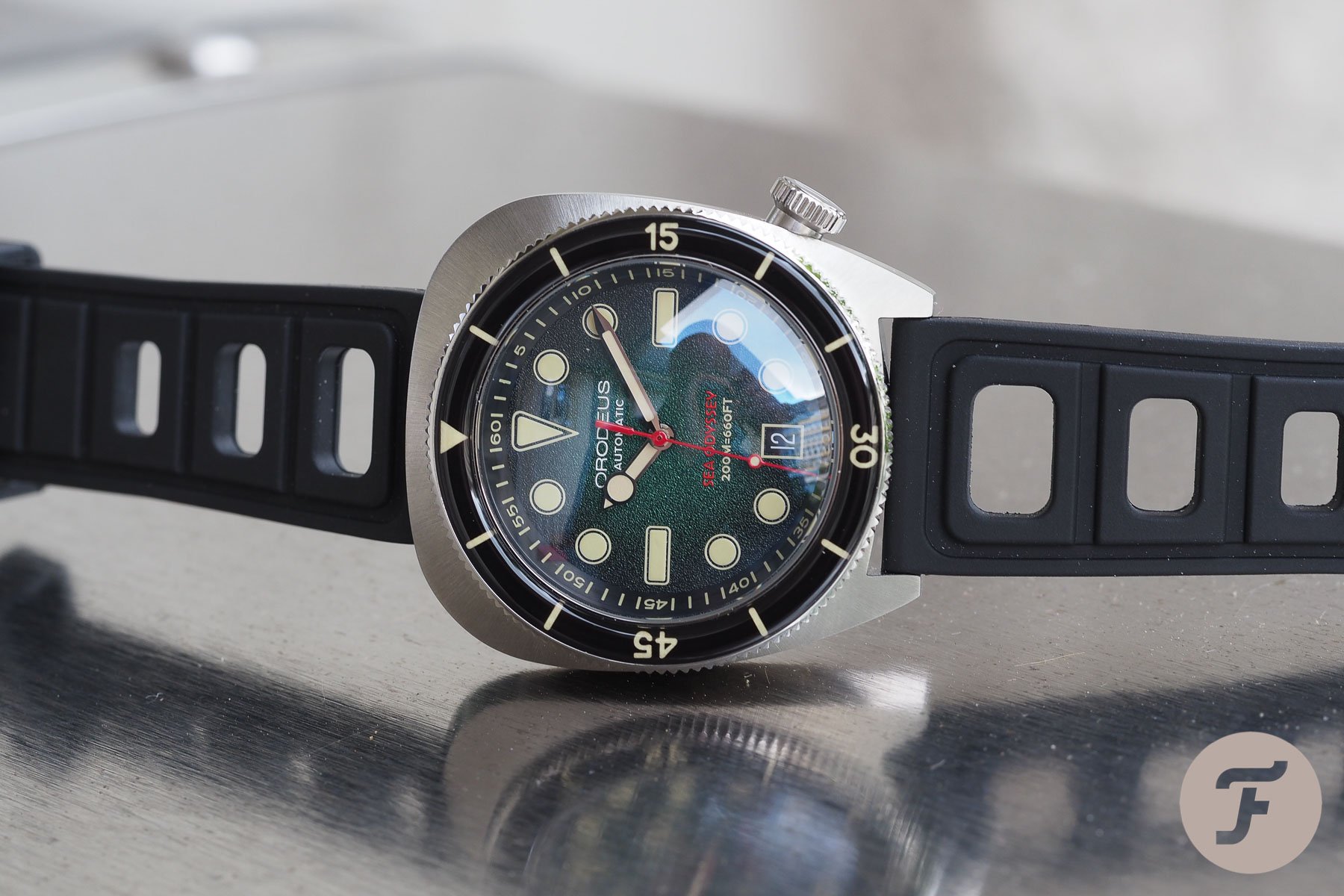 There’s no getting around the fact that the Orodeus Sea Odyssey is a wild-looking watch! Is it a bullhead, is it massive, and is it uncomfortable? Well, I’m here to tell you that it’s none of those things! In fact, it’s a pretty creative piece that you’ll likely never see on someone’s wrist, but perhaps you should. This watch from the small Singaporean brand is definitely a head-turner. 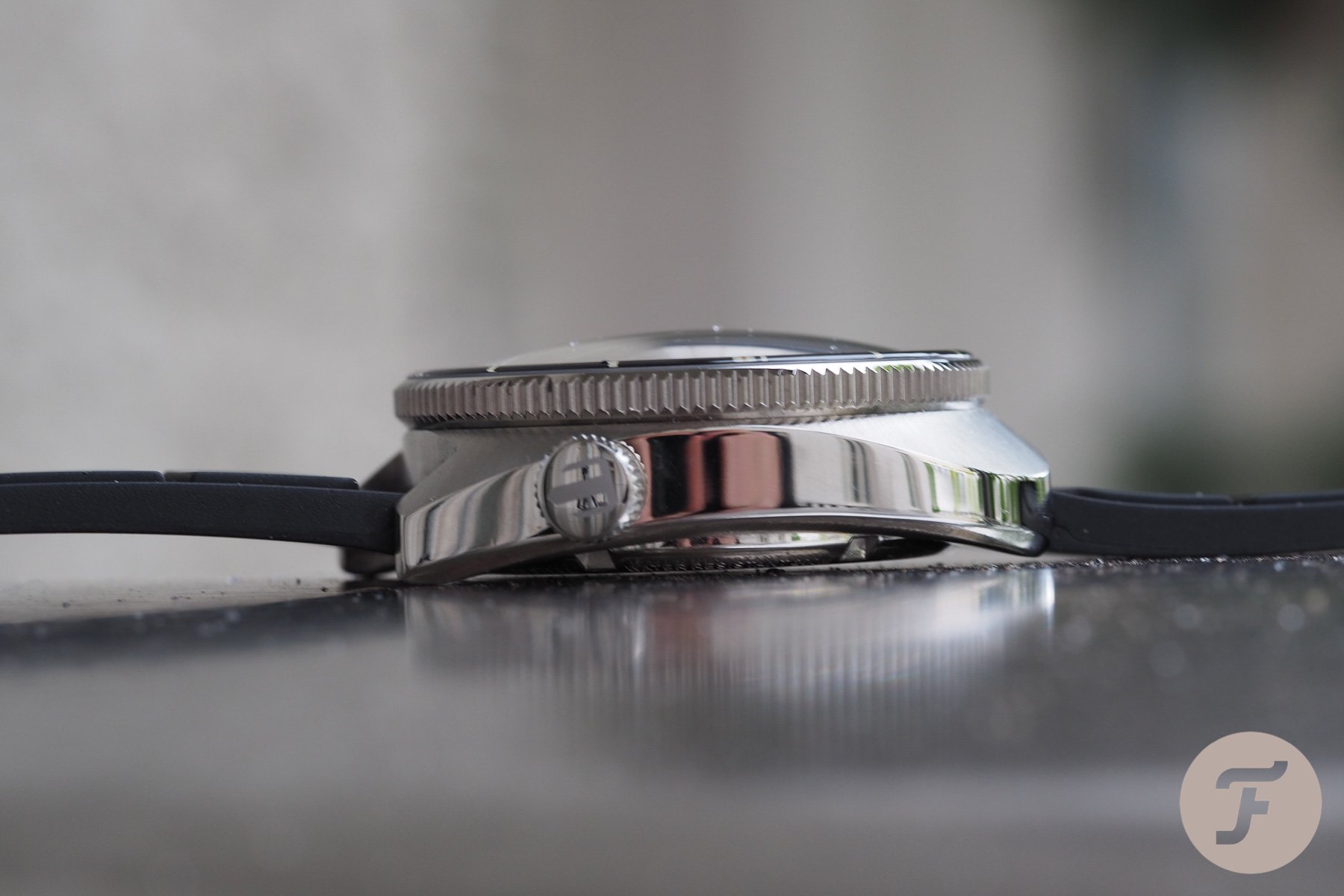 The Orodeus Sea Odyssey is billed as a “retro dive watch,” and that’s pretty believable. One can look at this piece and find lots of little snippets from watches we know from the past — some from long ago and some from the last couple of decades. Somehow, I think, it all comes together to form something unconventional but pleasing. I will say that if there’s one supreme demerit on this watch, it’s that it is seriously difficult to photograph without piling up reflections. I’ll get to why that is. 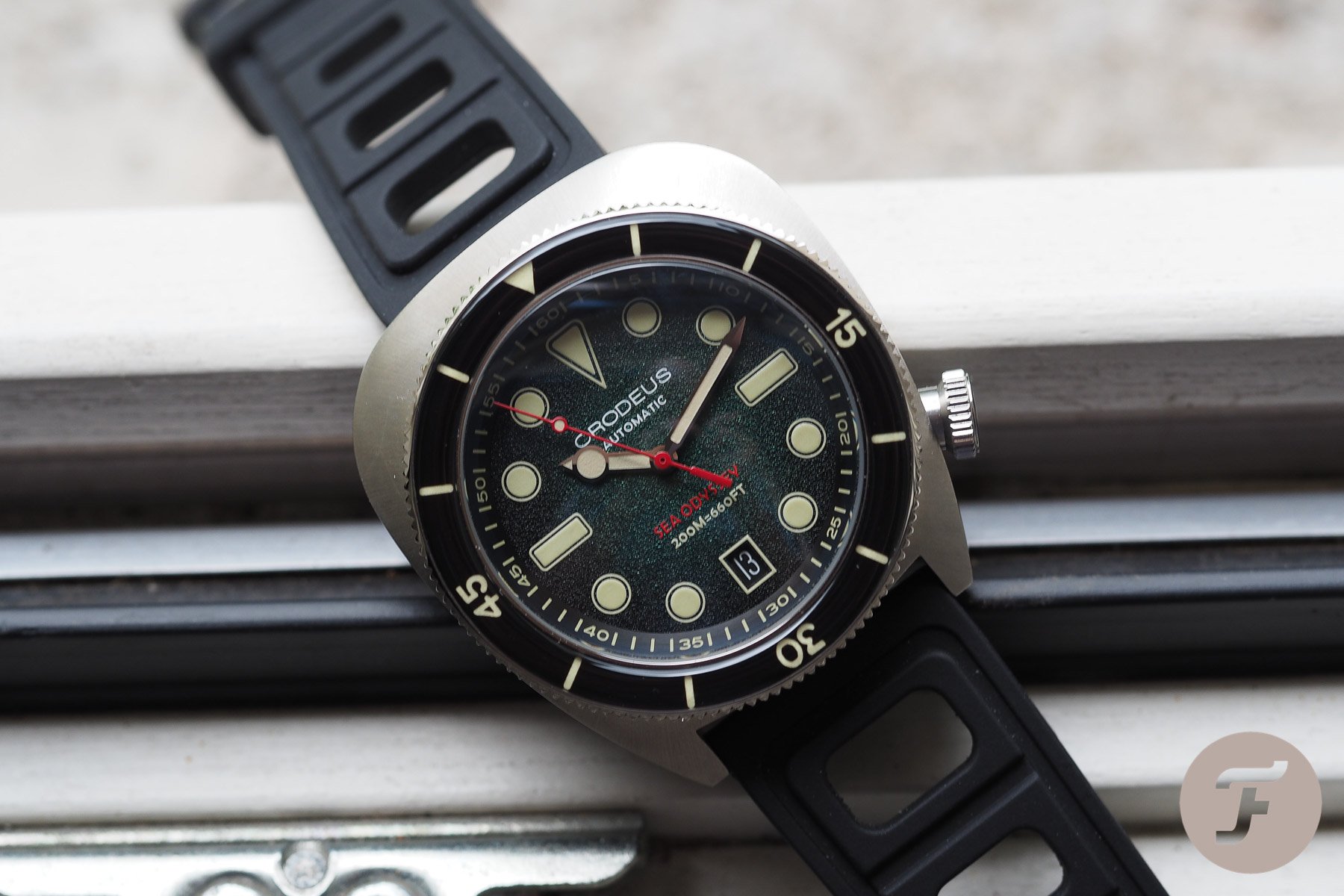 What is the Orodeus Sea Odyssey?

As said, the Orodeus Sea Odyssey is a retro diver in a really unique shape. Your eyes might not believe this, but unlike a Bullhead case, this watch has a 22mm lug width on both sides. The 6:00 side of the case simply tapers down to 41mm from the thicker half at 12:00, which comes in at 45mm. What initially drew my eye to this watch is the crown placement at 4:00. This naturally reminded me of Seiko and even the case shape, in some ways, felt a little like a reimagined 6309 Turtle. Maybe that’s stretching it a bit, but that’s what caused me to make contact in the first place. Orodeus actually mentions a rare ’70s jumping-hour watch as their original inspiration.

You’ll notice a yellowed vintage-style unidirectional bezel. It’s actually made of K1 glass and if you were to take a cross-section, it’s essentially a semicircle. The bezel has 120 clicks and is really nicely weighted. While we’re talking about “action,” the screw-down crown is really nice to use and exhibits none of the sloppiness, weak threading, or grit that can accompany a diver from a small company. 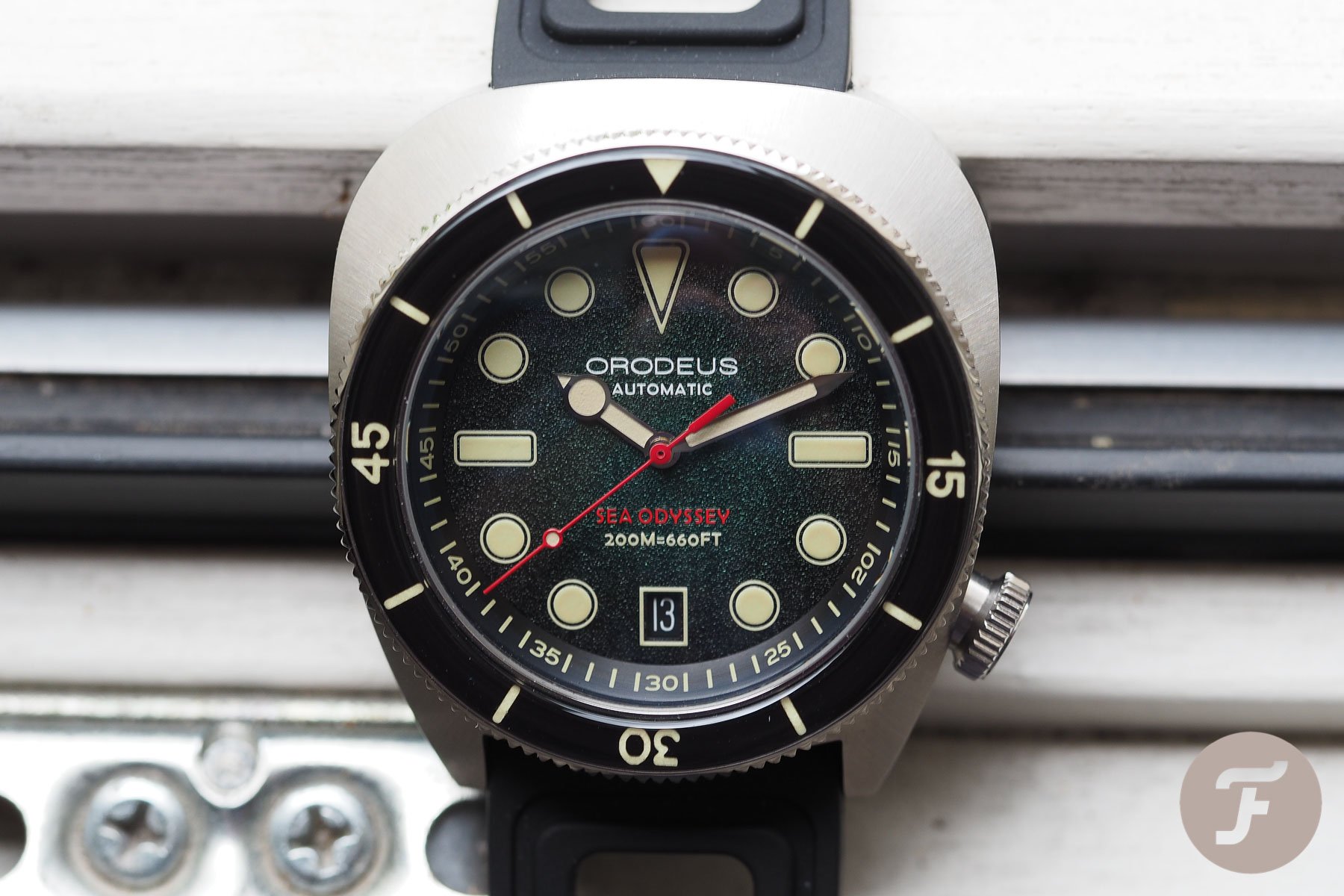 The culprit behind my mirror-like images is the 3mm thick domed sapphire crystal that supports the 200-meter rating. It’s not a bubble, but it is extremely domed almost to the point of a vintage Squale. It’s a cool touch and despite its height, the entire watch is only 13.5mm thick. The crystal covers an attractive dial with a crackly type finish. I opted for the green model, but gray, and even a yellow version exists. The dial has a bit of a fumé style to it, as it darkens towards the edges. The printed, aged Super-LumiNova indexes are traditional for a diver and even cause me to recall the recent Laventure watches that Rob loves to cover. The hands are lume-filled and aren’t a copy of anything that I know of, but there’s a bit of Rolex or Tudor in there somewhere. Finally, red touches help add some contrast. 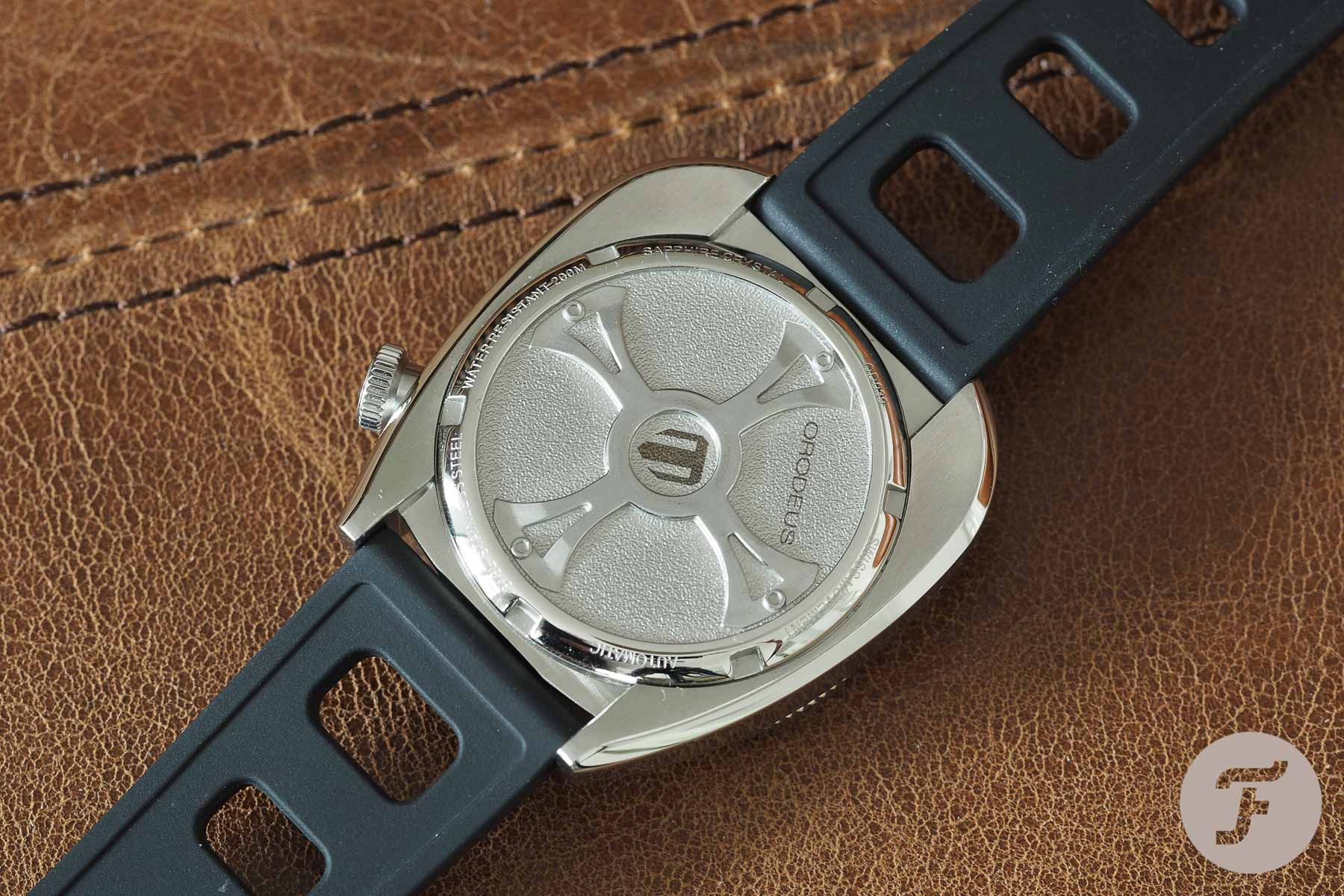 The Orodeus Sea Odyssey boasts a screw-in case back with a steampunk design. Fittingly, the brand states that the whole watch is supposed to remind us of sci-fi yarns and evoke images from stories such as 20,000 Leagues Under the Sea by Jules Verne. Inside, things are a bit more customary as the watch uses the Sellita SW200-1 automatic. 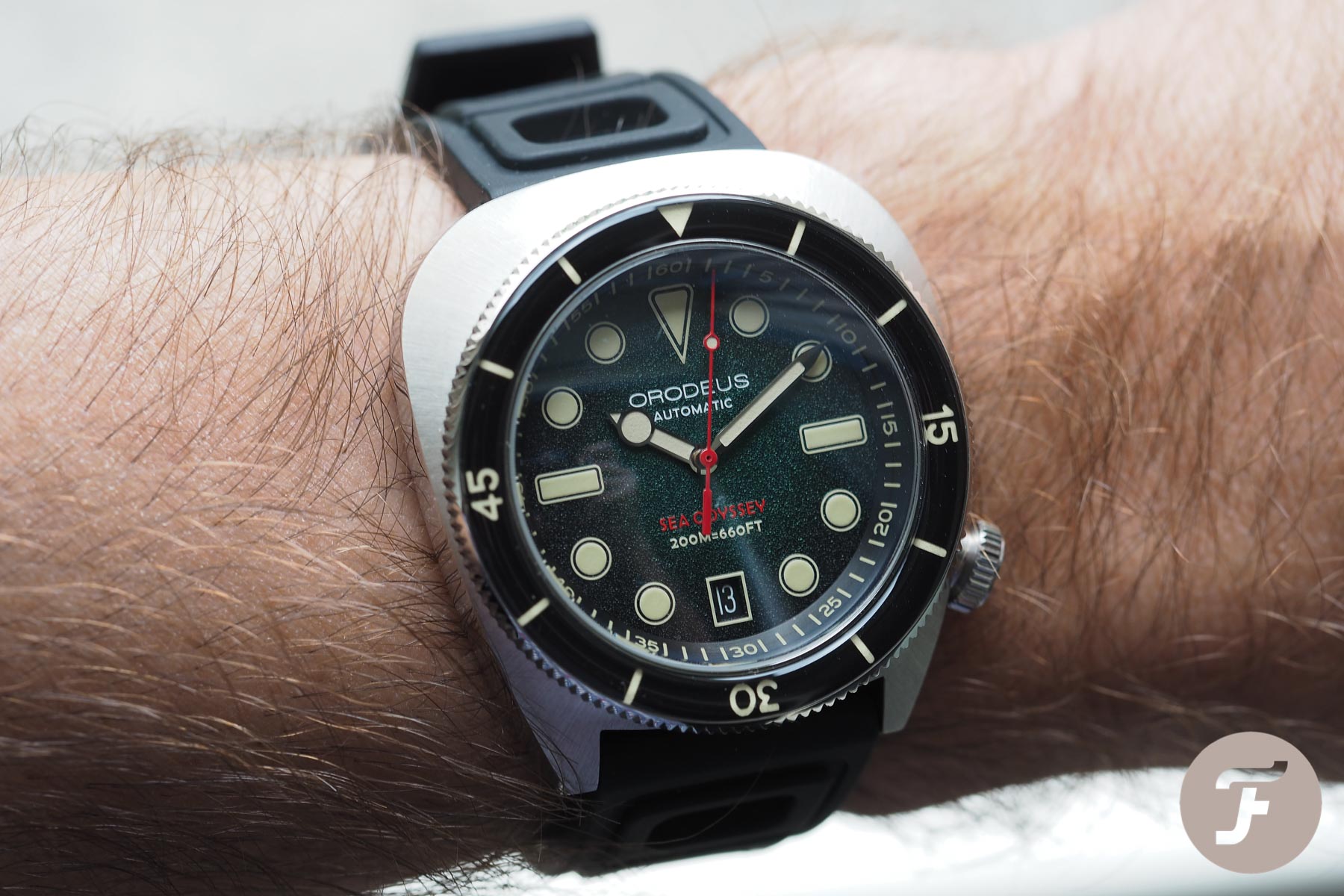 Strangely comfortable on the wrist

On the wrist, the Orodeus Sea Odyssey actually excels. It’s only 43mm from lug to lug and uses a highly pliable black rubber strap with a signed pin buckle. You’ll note that the lower half has lugs while the upper is lugless. I’ve never tried anything so incongruous, but it really works. Other touches like the polished flanks and sunburst polishing on the top surface help class up the watch and it avoids being a gimmicky thing.

I never spend any time discussing the packaging for a watch, but the Orodeus Sea Odyssey has a box worth mentioning. I don’t know who did the art for this box, but it looks like something from a ’50s sci-fi pulp magazine and I LOVE it! There’s a diver in a typical old-school wetsuit and a sea monster to boot. It’s fun and yet it’s not cheesy. 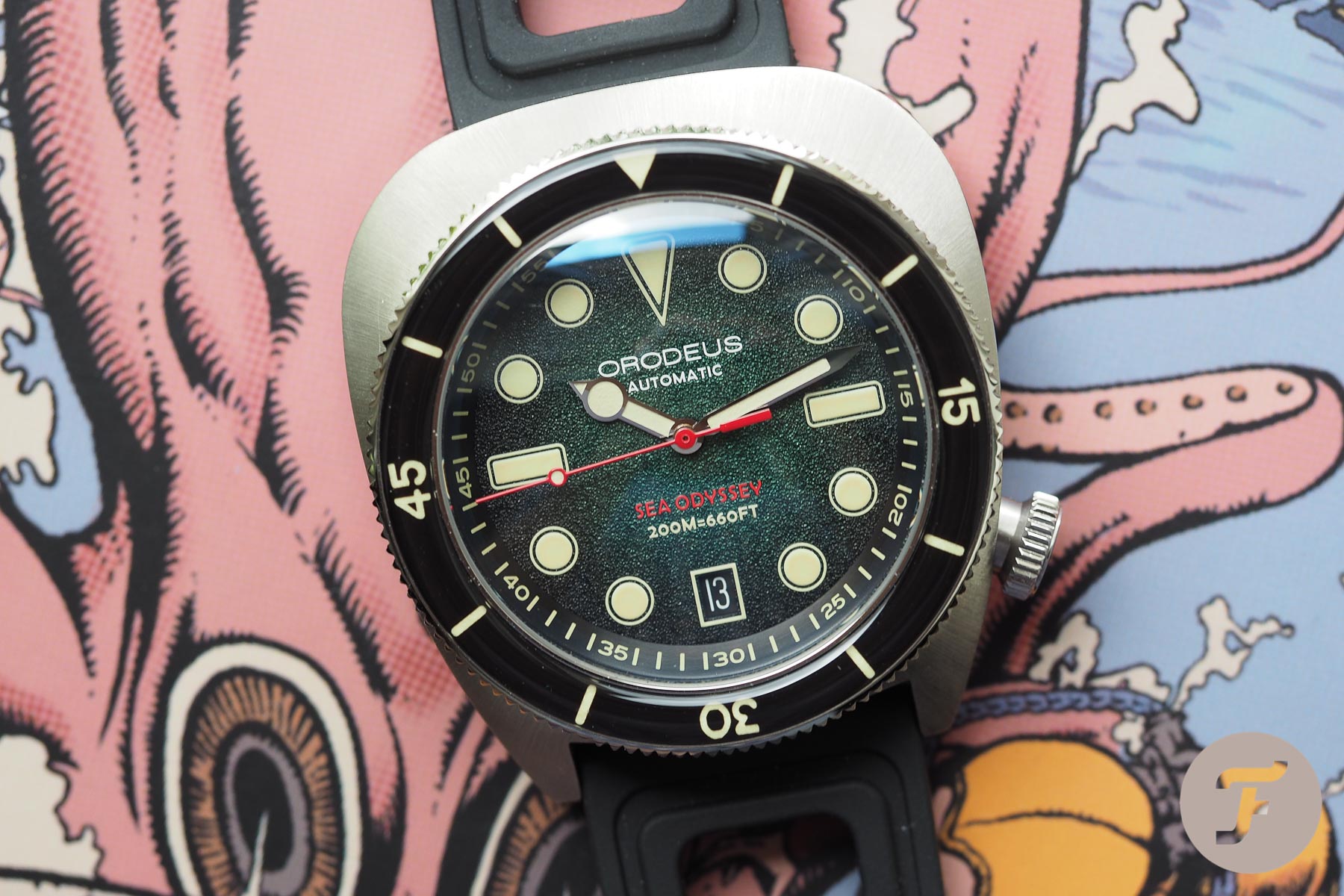 The Orodeus Sea Odyssey is available on the brand’s website for $980 (that’s USD). Depending on how you look at things, that’s either a lot or a little. I have no doubt that this watch could hold its own against whatever other 200-meter diver, but you definitely have to enjoy its uniquely unorthodox looks. This price bracket is definitely crowded with great pieces from the likes of Certina, Mido, Hamilton, and Seiko to name just a handful. Still, this is a seriously fun piece and perhaps something like the gray model wouldn’t stand out so much. Then again, why not have some fun and choose something different? I enjoyed this watch quite a bit and perhaps that will have me checking out microbrand releases a bit more intently.