Even when you’re not into watches, or into Speedmasters, it is nearly impossible that you have not been confronted with a gold coloured astronaut, a picture of the gold Speedmaster Apollo 11 50th anniversary or an advertisement of the Moonwatch.

What did you expect? Omega has been keen on their role as the official supplier of chronographs to the NASA astronauts since 1965. The 25th anniversary was already celebrated with a special engraved steel Moonwatch (2500  pieces), a white gold Speedmaster Professional (limited to 500 pieces), a very limited run of 50 pieces in platinum and a special run of the steel Speedmaster Professional watch with a display back for the Italian market (999 pieces). This year, Omega is celebrating the 50th anniversary of the Moon landing and Moonwatch. Not only with two amazingly well-designed watches, the Apollo XI in stainless steel (here) and the one in gold (here), but also with a series of events all over the world. This series started with a huge event in Cape Canaveral early May, but also the local markets have been hosting these 50th-anniversary events.

For our local market, that happens to be The Netherlands, Omega hosted an event last week (on a Tuesday of course) in Amsterdam. Press, retailers, certified service center staff and a handful of influencers were invited to join Omega to celebrate the 50th anniversary of the Moon landing and Moonwatch. The theme, “Golden Moments”, was well respected and the impressive venue had a large gold coloured box in the center of the main hall. Inside, the new Speedmaster Apollo XI (limited to 6969 pieces) in stainless steel and a touch of gold, as well as the Speedmaster Apollo XI in 18-carat Moonshine gold (1014 pieces), were displayed inside. On the outside of the box, other models from the [current] collection were displayed. 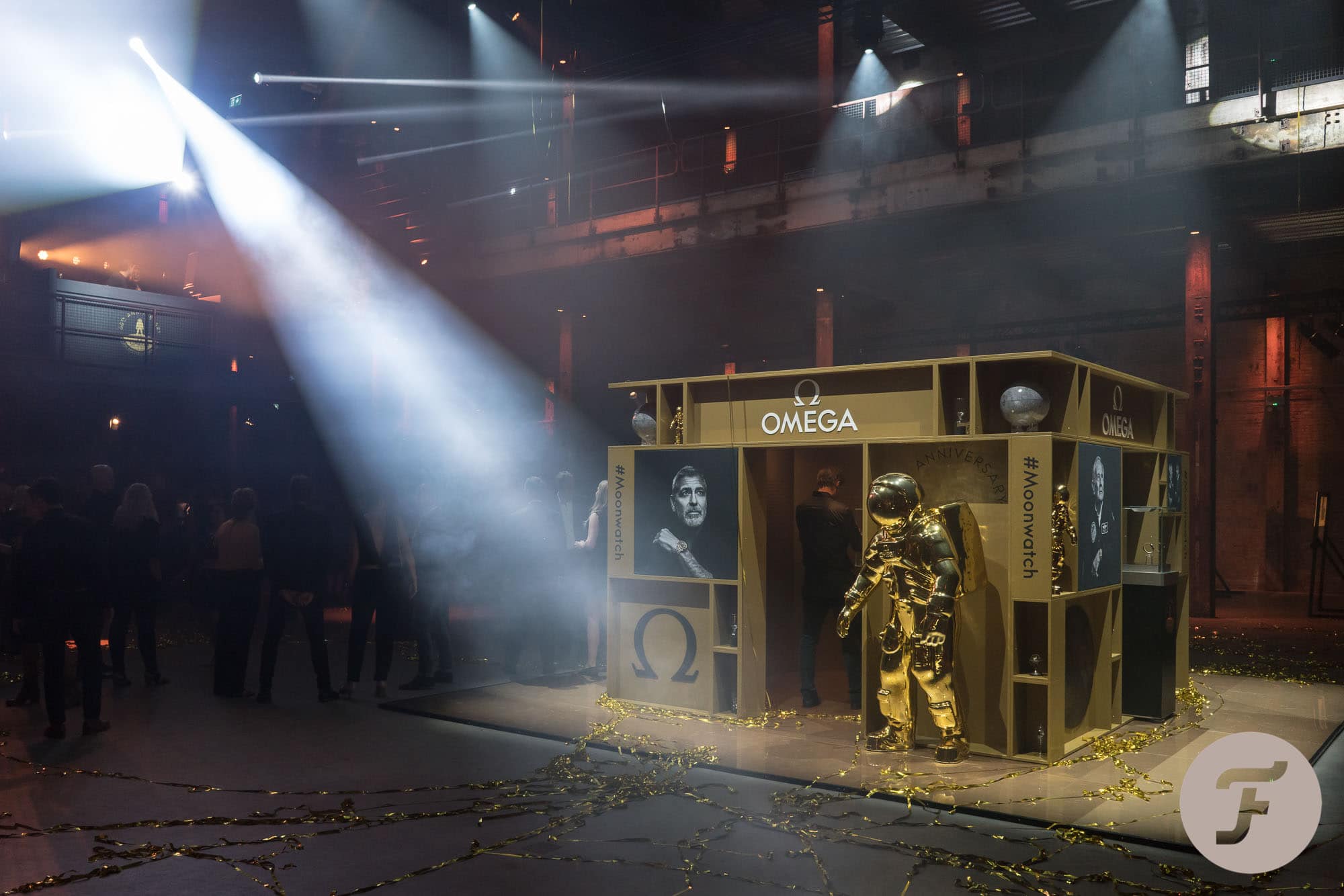 Omega’s brand manager for the Benelux (Belgium, The Netherlands and Luxembourg), Eric Vanderhoeven, gave a welcome speech, where he talked about the Moon landing, the Speedmaster watch and its relationship to the Moon program. 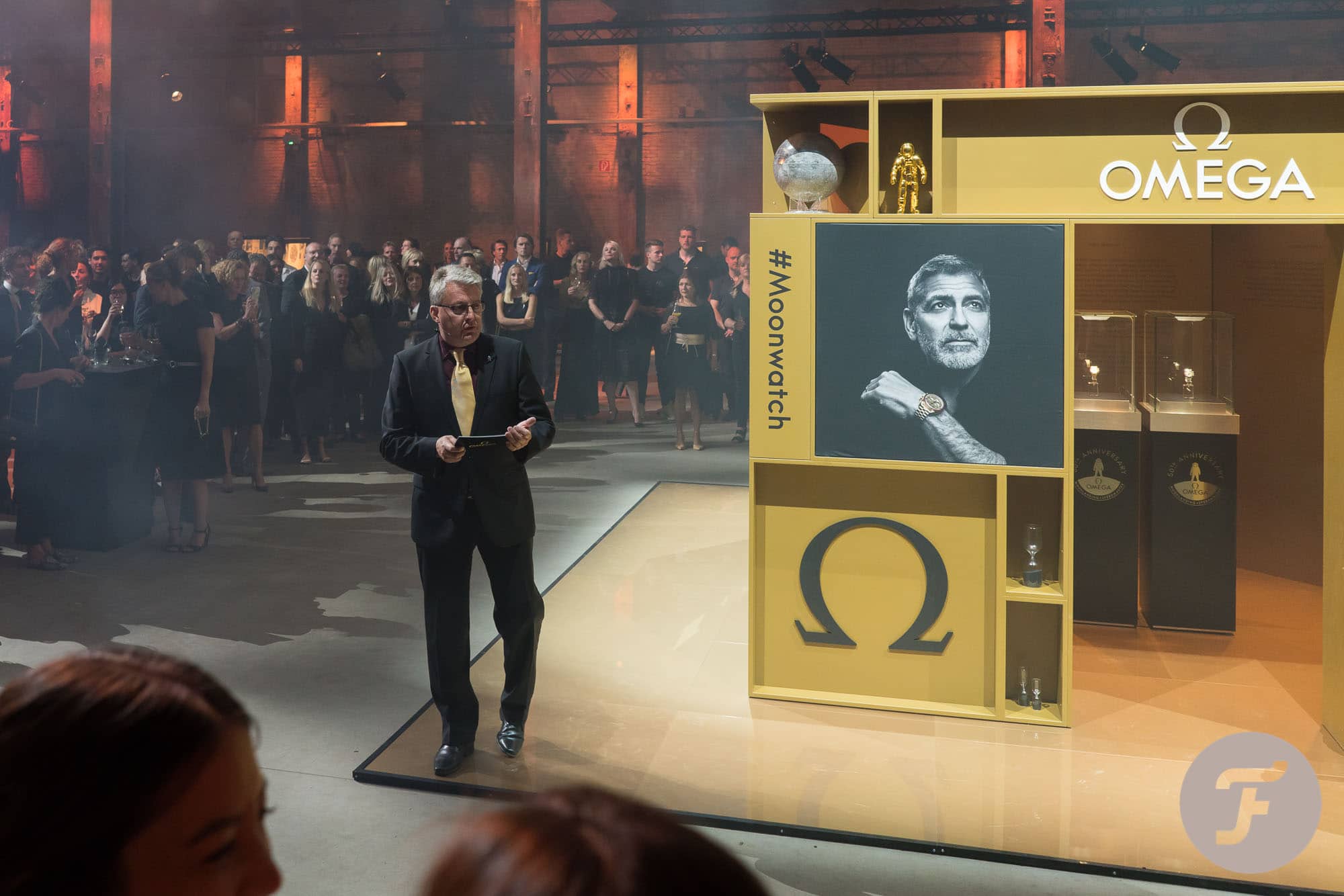 About 200 guests were attending the “Golden Moments” event in Amsterdam, or actually in a little suburb called Halfweg, in a former sugar factory. An incredibly nice venue, very industrial looking, making it perfect for an event with a lot of smoke machines and gold accents. Omega ensured there were a pretty good bar and a DJ (I admit I felt quite old when they turned up the volume).

What surprised me a bit is that it was for press, authorized dealers and influencers only. No collectors (other than ourselves and a few retail guys that we know collect themselves as well),  enthusiasts and so on. I believe that it wouldn’t hurt if there would be an extra 10 people, like the retailer’s best clients for example, that are really there to appreciate the watches. That said, Omega did their best to also have some vintage Speedmasters on the spot. 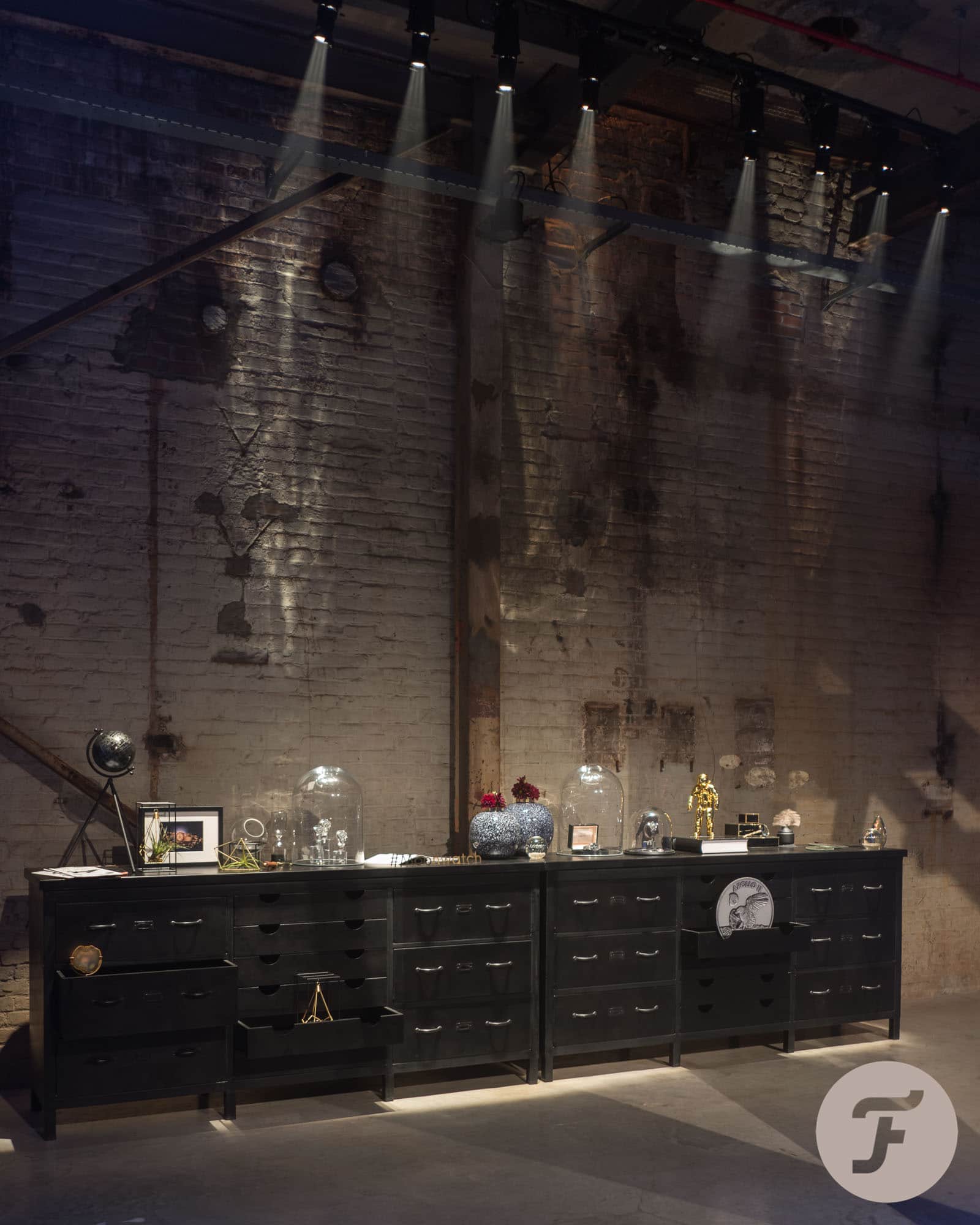 Meanwhile, the delivery of the Omega Speedmaster Professional Apollo XI in steel (and gold) have started. The first gold watches were delivered before July 1st already and the steel models are delivered started last week. It is good to see that Omega is capable of delivering these models so quickly, while they are equipped with new movements (caliber 3861 and 3861M) and cases (based on the 105.012).

There was quite some interest in these new Speedmaster models during the event. Someone from Omega’s product team from Switzerland was there to give a thorough explanation when necessary. Especially some of the retailers let us know that they’re looking forward to receiving the watches. The demand is incredibly high, and there’s no doubt the portion of the 6969 steel models for the Benelux market will be gone quick. The number of allocated gold pieces is probably not so high, which makes sense for this relatively small market. 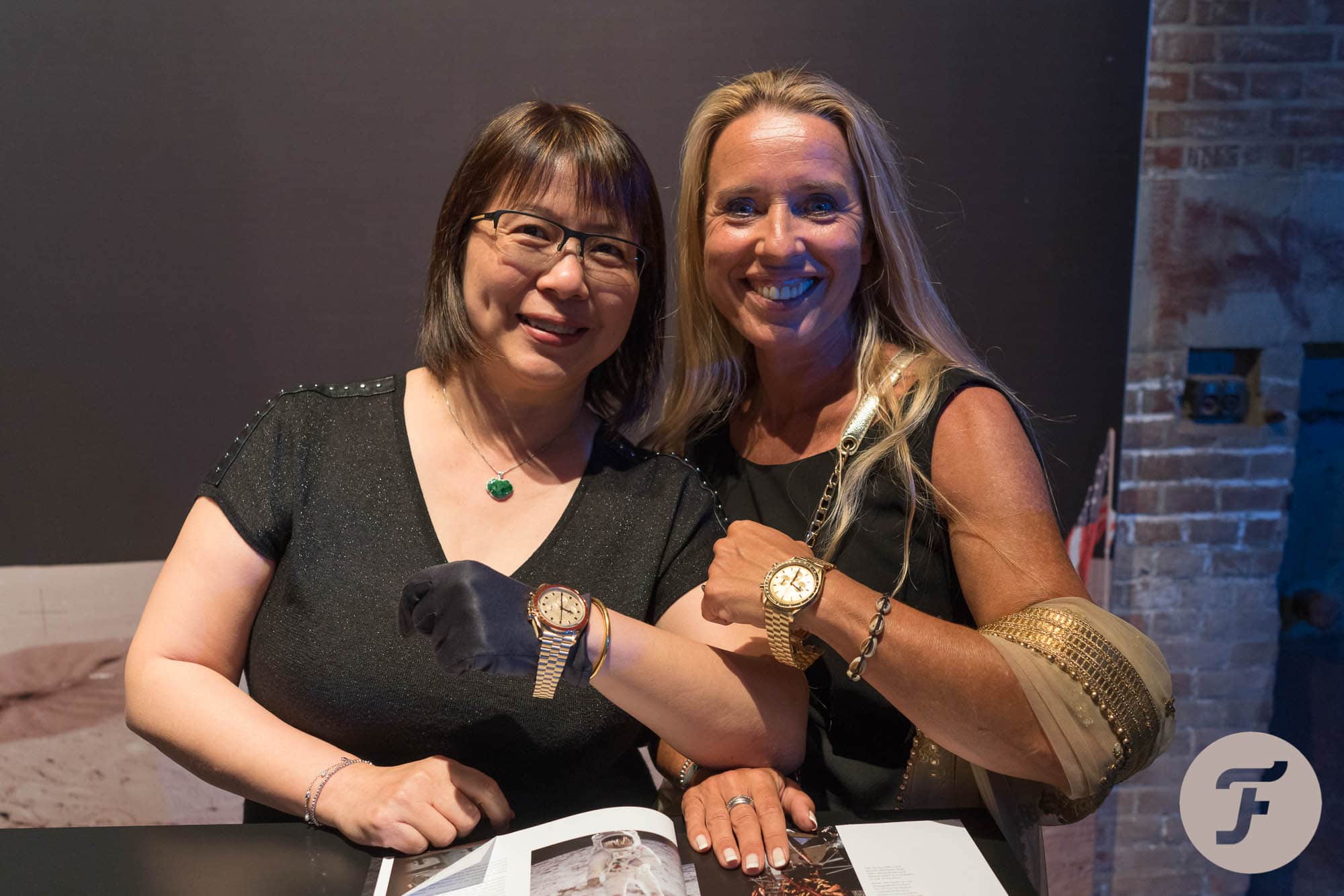 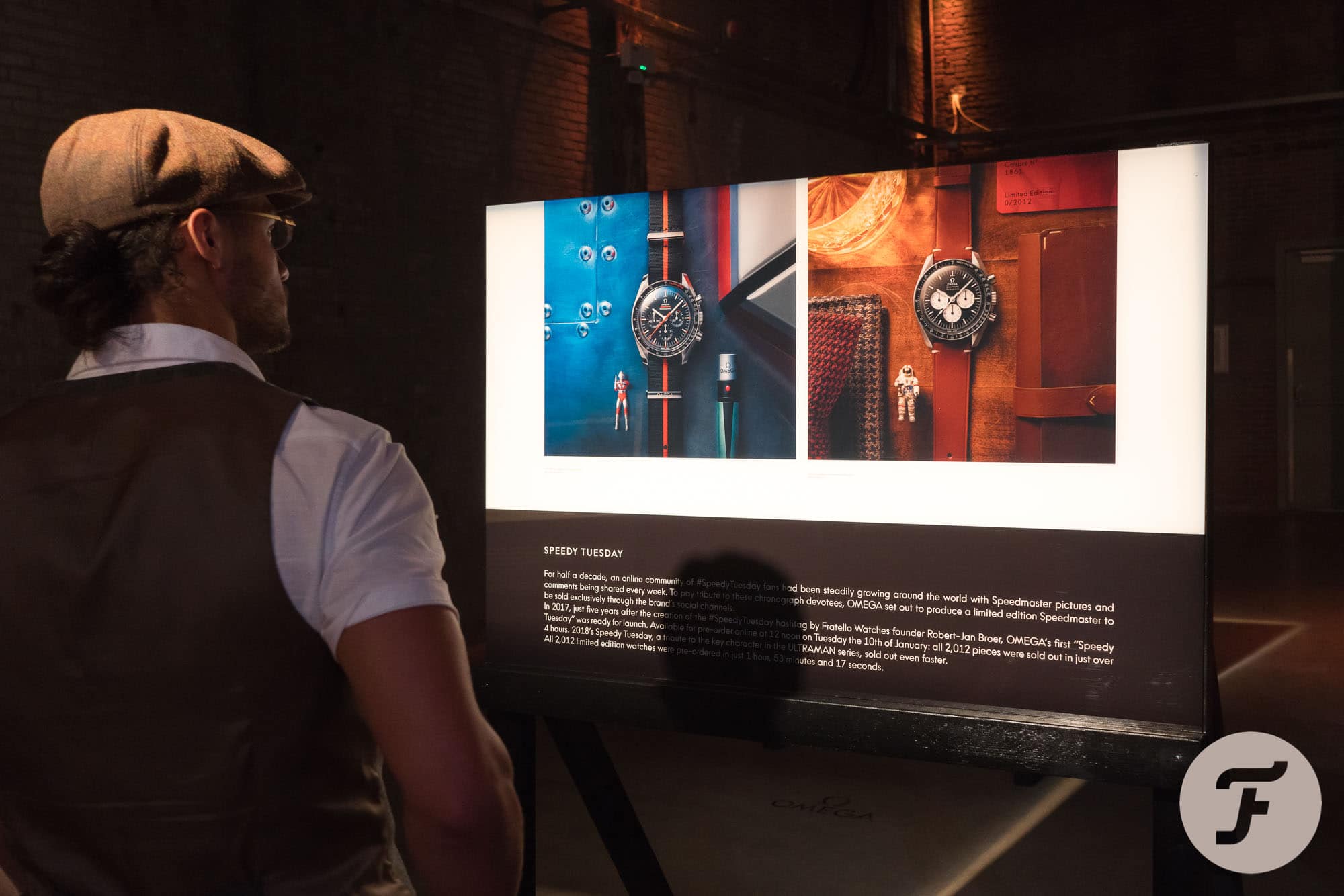 The decoration of the venue was superb. Posters and photos of Buzz Aldrin, Charlie Duke, and of course of George Clooney. Then, there was a huge screen that showed the short movie that was recorded earlier this year. With a dozen or so special theatre seats (put there for the occasion), you could watch the movie (using headphones). 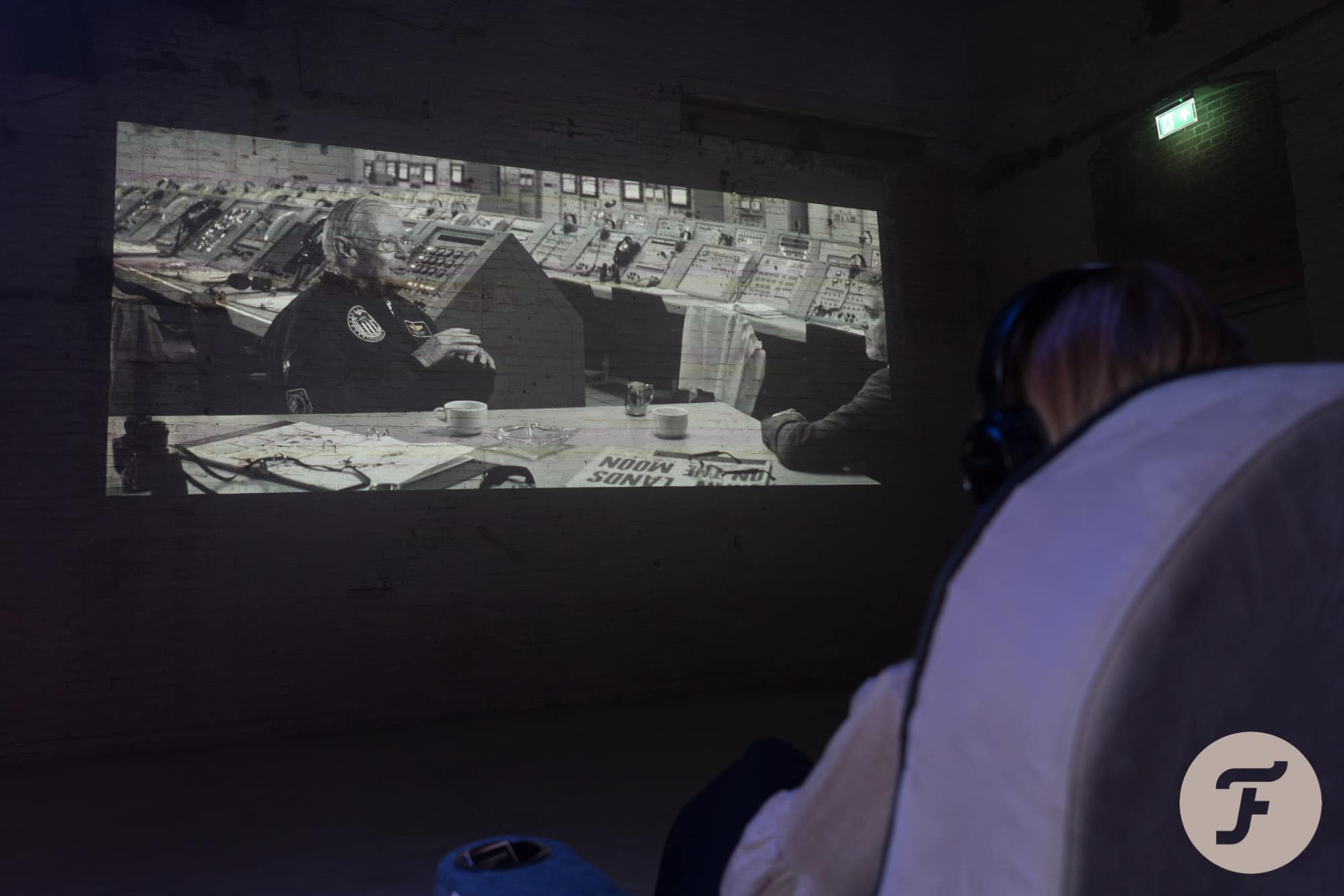 Enjoy the rest of the images of the “Golden Moments” party that was held on July 2nd in Amsterdam. 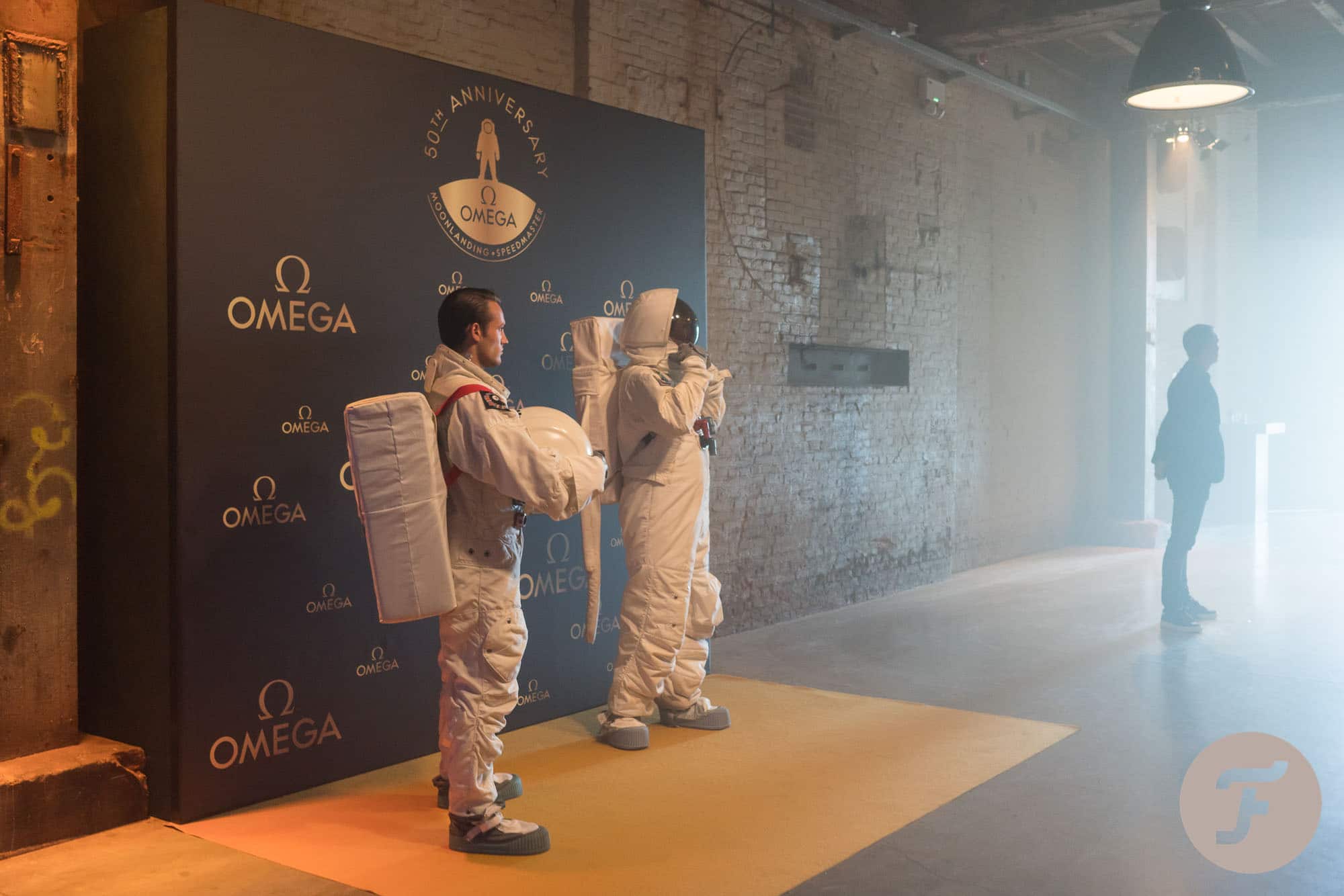 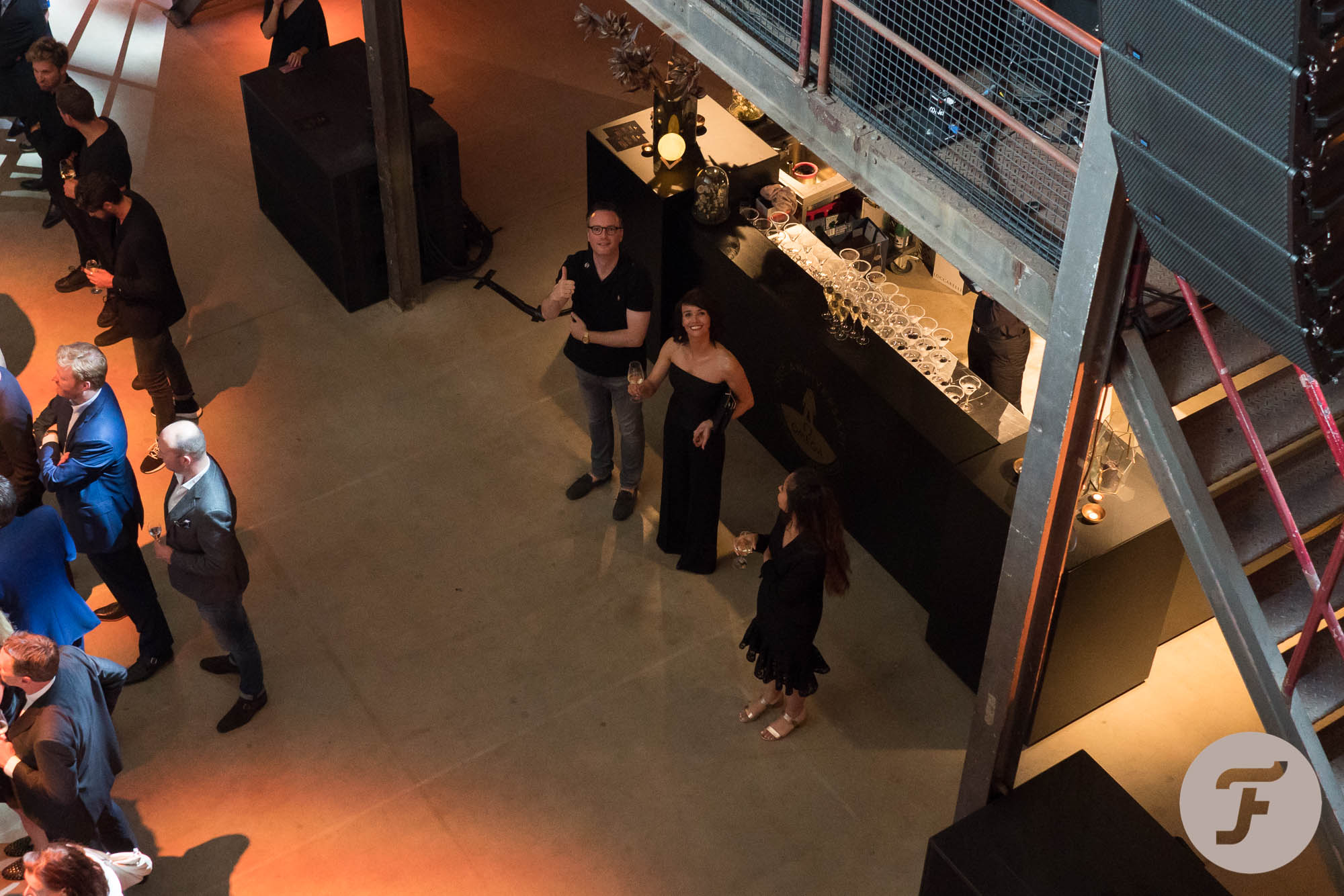 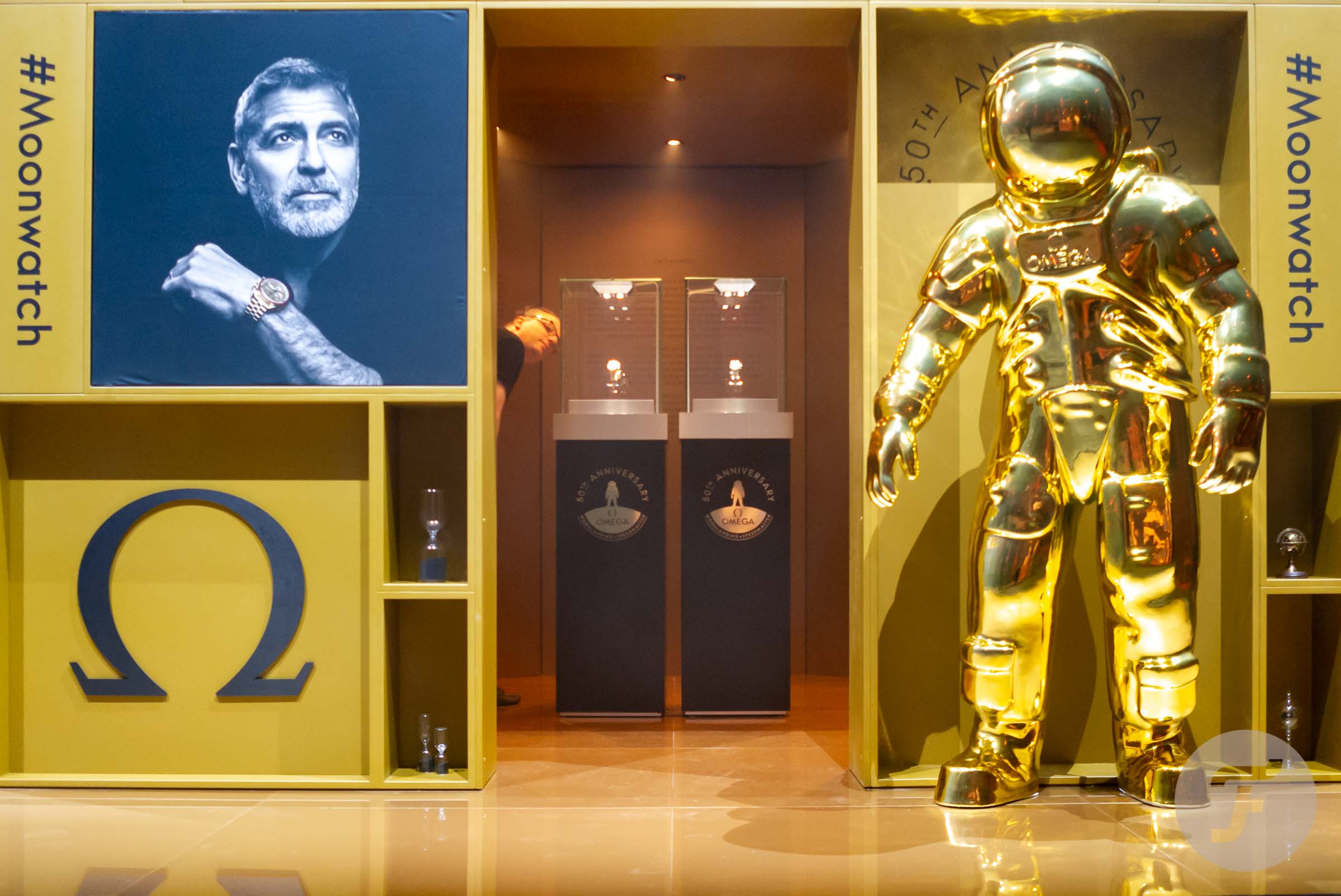 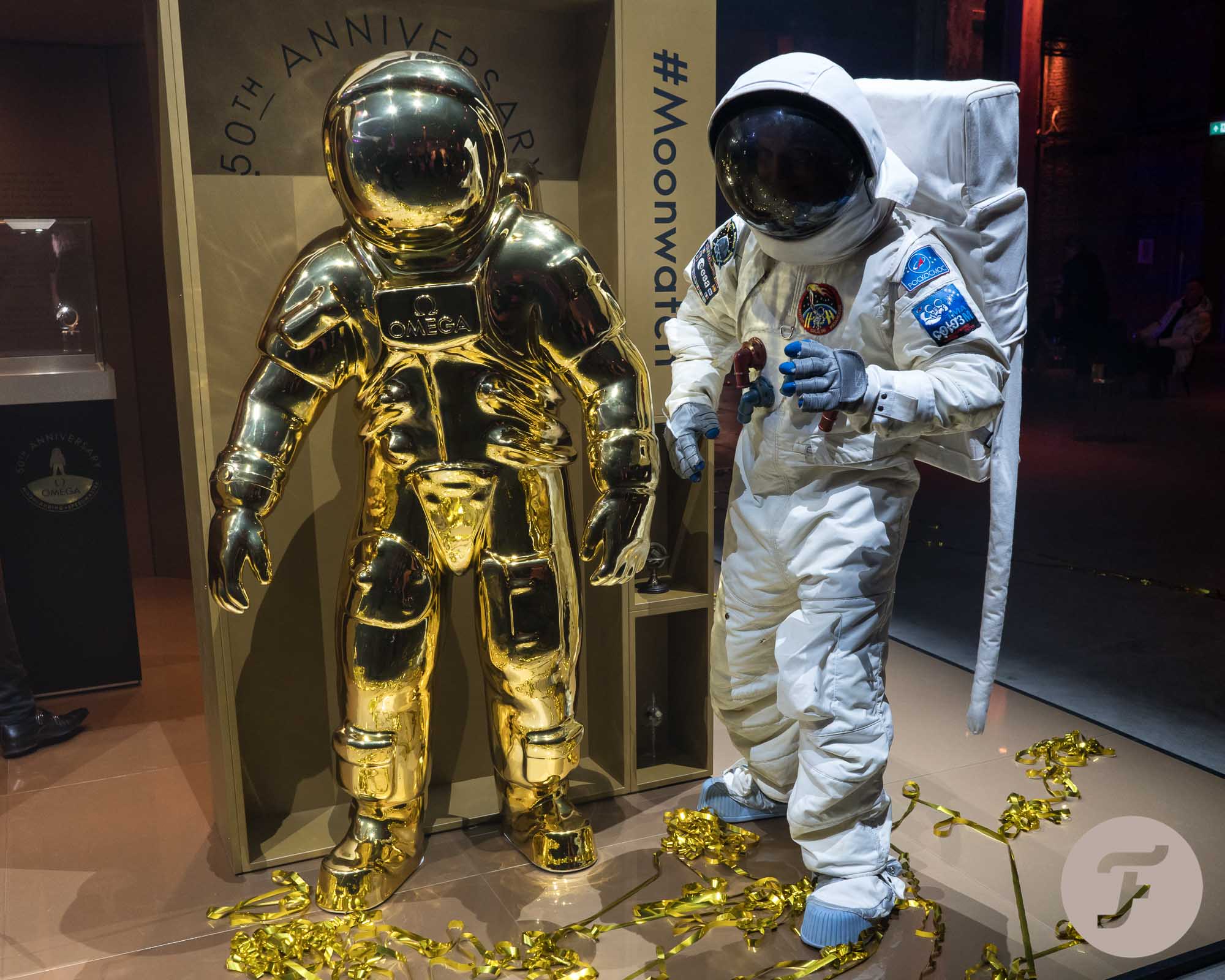 For now, enjoy this Speedy Tuesday and if you have a story to share with us, don’t hesitate to contact us.

Hot Topics
Introducing: The New Seamaster Professional 300M 60 Years Of Bond — With A Special Animated Case Back
102 comments
Are You Still After An Omega × Swatch MoonSwatch?
74 comments
It’s Time To Invest In A Dress Watch — Our Picks From Breguet, Omega, Grand Seiko, And More
70 comments
Sunday Morning Showdown: The Tudor Pelagos Provocation — Pelagos Vs. Pelagos 39
55 comments
The Rolex Waitlist Conundrum — How Much Will The Price Of Your Watch Increase While You Wait?
48 comments
Popular
An Overview Of All Omega Speedmaster Apollo XI Models
Robert-Jan Broer
17
Omega Speedmaster Hodinkee 10th Anniversary Limited Edition
Robert-Jan Broer
7
The Omega Seamaster Diver 300M Returns – On The Wrist Of Daniel Craig
Paul Dezentjé
17