It’s the 60th anniversary of the James Bond movies this year. Last September, the Omega Seamaster 300M No Time To Die that Daniel Craig wore in the movie fetched a whopping £226,800 at Christie’s.

Thankfully, though, you don’t need to bring £226,800 to call yourself the owner of a watch identical to the one worn in a Bond movie. For this special installment of Pre-Owned Spotlight, I selected several watches featured in James Bond films. In a previous Pre-Owned Spotlight article, Nacho already included a Seamaster 2531.80, so I will refrain from using that specific watch that Pierce Brosnan wore in some of the 1990s James Bond movies. 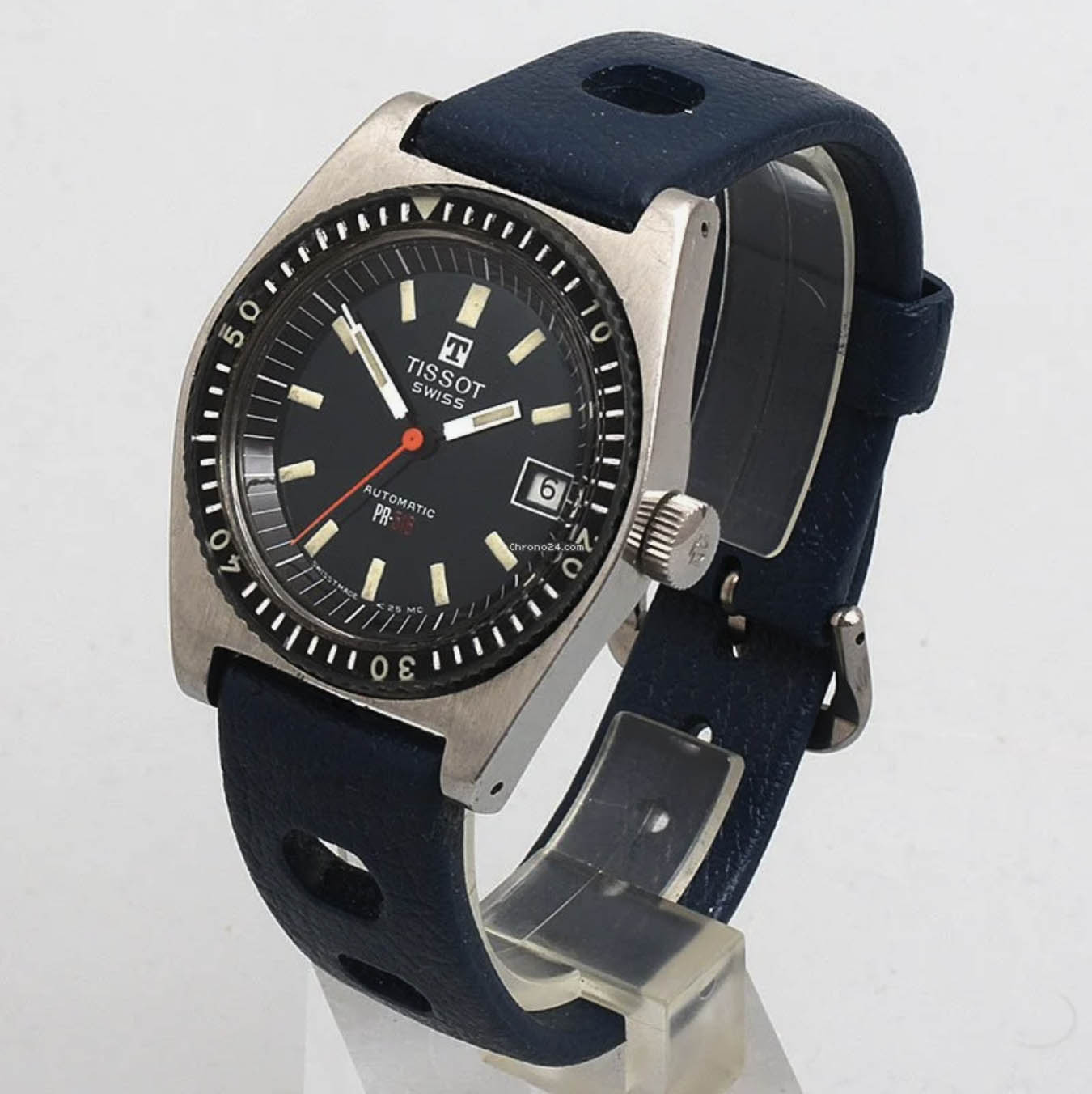 In the film Live and Let Die with Roger Moore in the role of 007, you will see Bond wearing a Tissot PR 516 watch on a steel bracelet. In earlier movies, Bond had worn Rolex watches (Submariner and a 6238 chronograph), but in this 1973 film, it’s a 36mm Tissot PR 516 with a date. I have found a similar one for sale on a rubber strap for €891 at a watch dealer in Germany. It’s a chunky-looking watch, despite its 36mm diameter, and has a 60-minute scale diving bezel. On the dial, you can clearly see the PR 516 logo, just like you can see on some stills from the Live and Let Die movie. There are more variations of the PR 516 out there, but the version here shows the same design elements as the one worn by Roger Moore. You can find it on offer here. 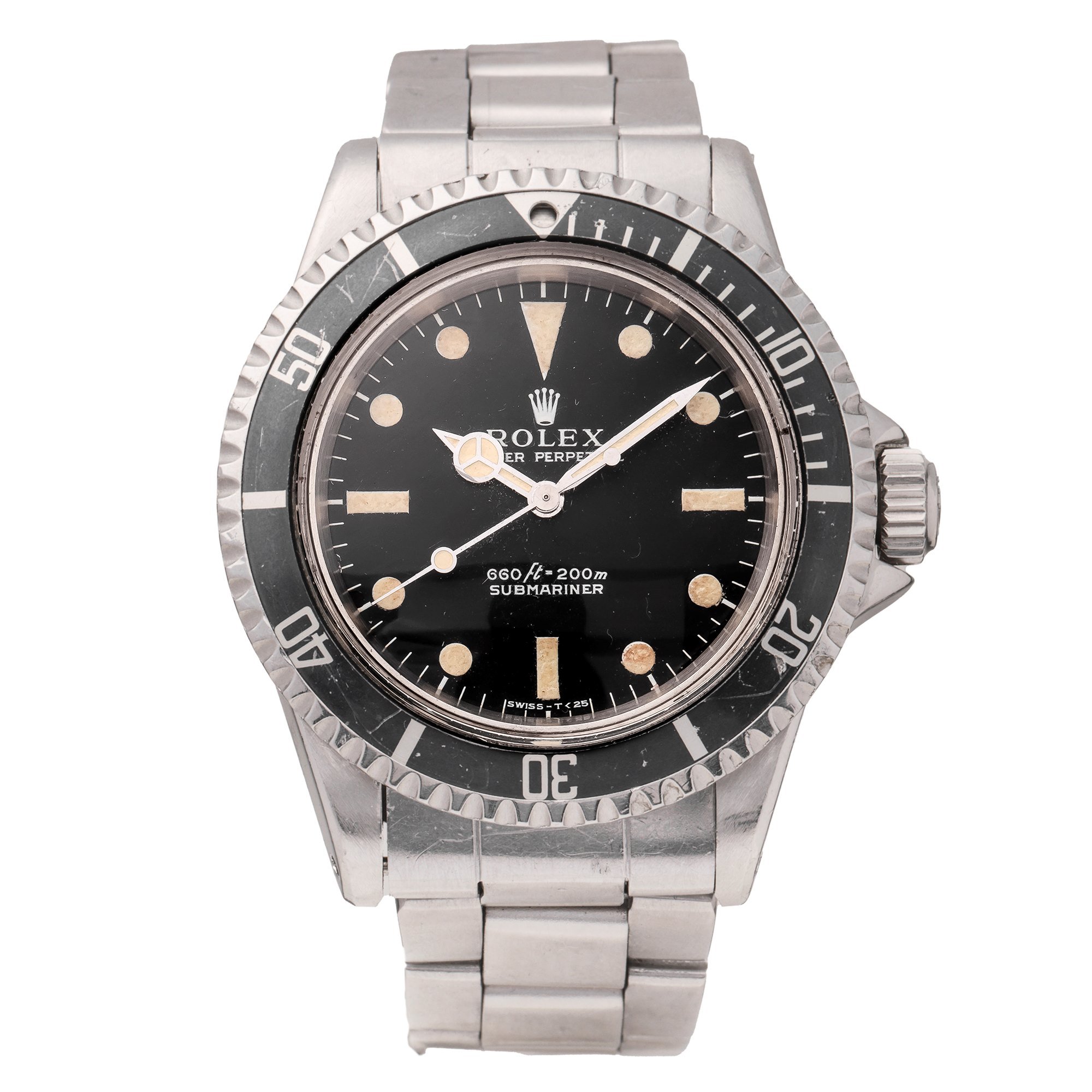 Let’s stay with James Bond’s Live and Let Die movie from 1973 for another moment. Besides the Tissot PSR 516 and Hamilton Pulsar LED watch featured in that movie, there’s also a Submariner 5513 on the wrist of Roger Moore. It’s a bit of a mystery why he’s wearing the Rolex and the Tissot in different scenes, but we expect that our friends from James Bond Lifestyle will find out at some point. The Rolex Submariner 5513 is one of the most classic dive watches around, and it’s a later generation than the Submariner worn in the first Bond movie 60 years ago. In 1962, Bond wore the Submariner 6538, and later on, he could be seen wearing the successors of that reference. The first time Bond strapped on a Submariner 5513 was in 1969 in the film On Her Majesty’s Secret Service. I’ve found a Submariner 5513 for sale for €15,299. James Bond wore the 5513 again in The Man with the Golden Gun in 1974. You can find the Rolex Submariner 5513 on offer here. 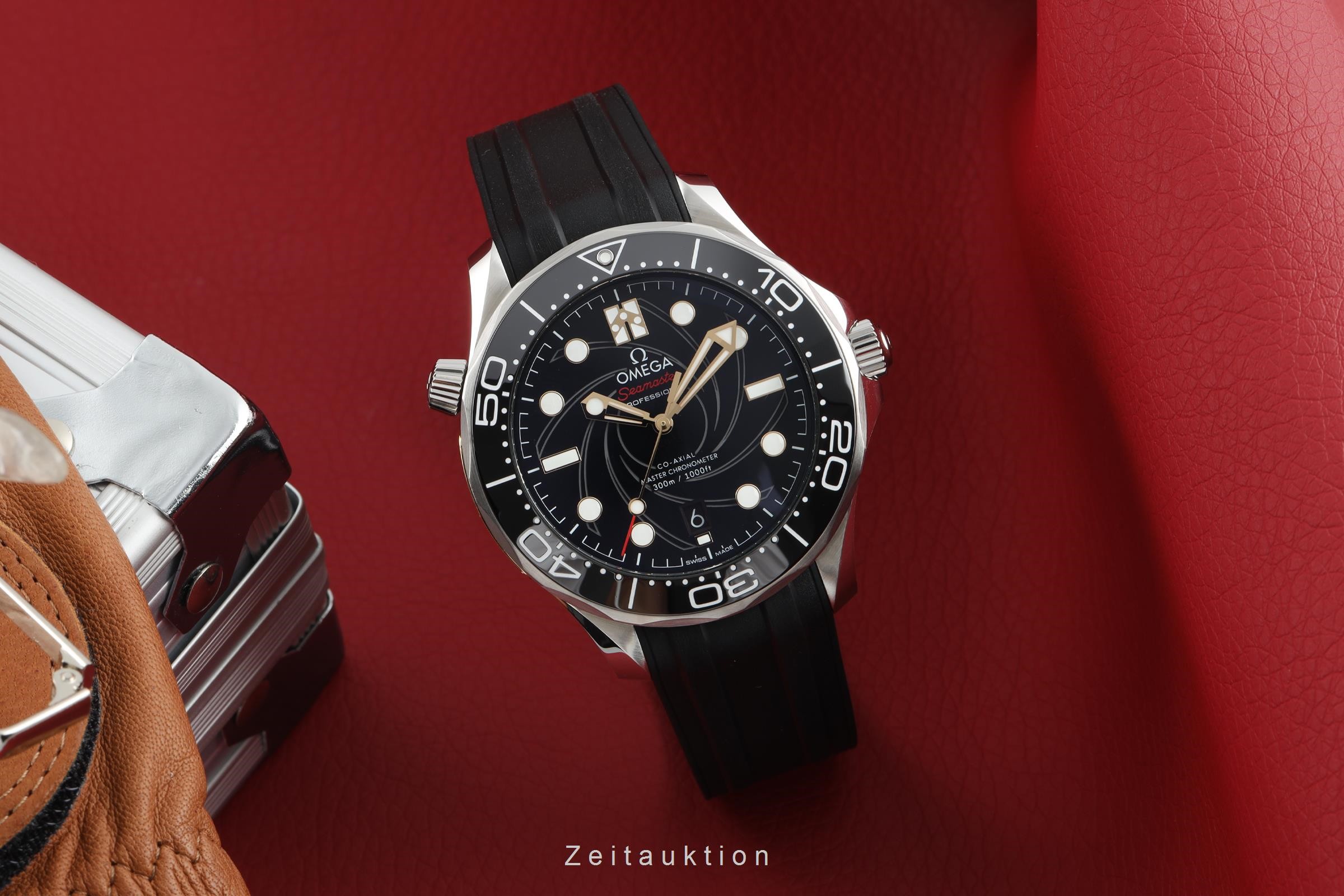 In 2019, Omega introduced a special series for the 50th anniversary of On Her Majesty’s Secret Service. We covered the stainless steel version in-depth here. Jorg wrote, “The most important [element] that catches the eye is the dial that refers to the opening credit sequence of all Bond films. The black ceramic dial is laser-engraved, depicts the view down the barrel of a gun, and the diameter of its center is exactly 9mm.” This watch was a limited edition of 7,007 pieces for obvious reasons. However, I don’t think that it means the market is flooded with them. There are more Bond fans than you might think. The last known retail price was €7,100, but this discontinued piece fetches higher prices today. I’ve found this Seamaster 300M “On Her Majesty’s Secret Service” 50th-anniversary watch offered for €11,650 here. 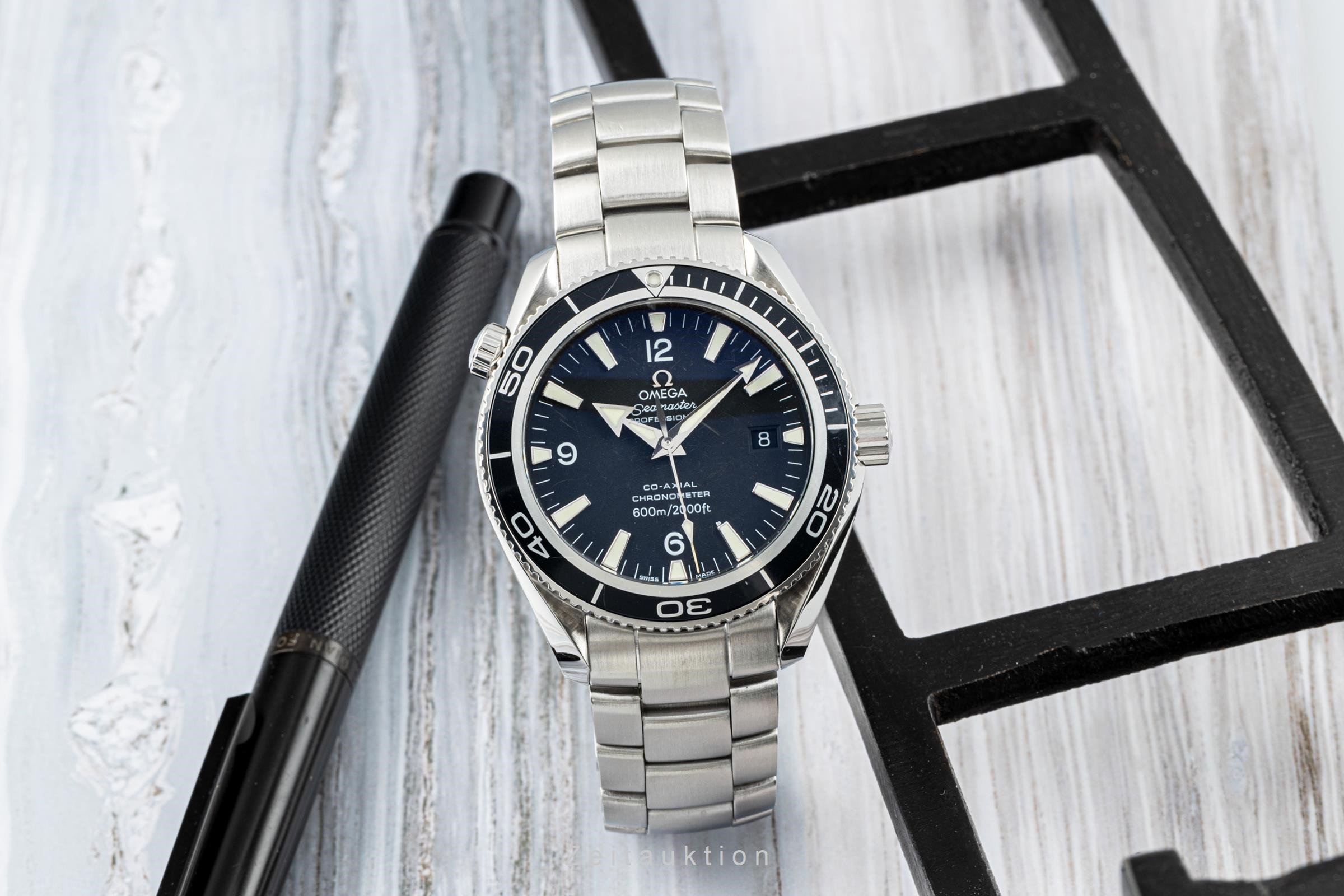 In 2008, Daniel Craig appeared in his second James Bond flick, Quantum of Solace. In Casino Royale (2006), the Planet Ocean appeared briefly. This 2201.50 is a 42mm diameter Seamaster Planet Ocean, dating back to 2006. Inside is Omega’s caliber 2500, an ETA-based movement but with a Co-Axial escapement. You can find these fairly easily on the pre-owned market, but this particular one, with clear signs of wear, is priced nicely at €3,550. You can find it here. 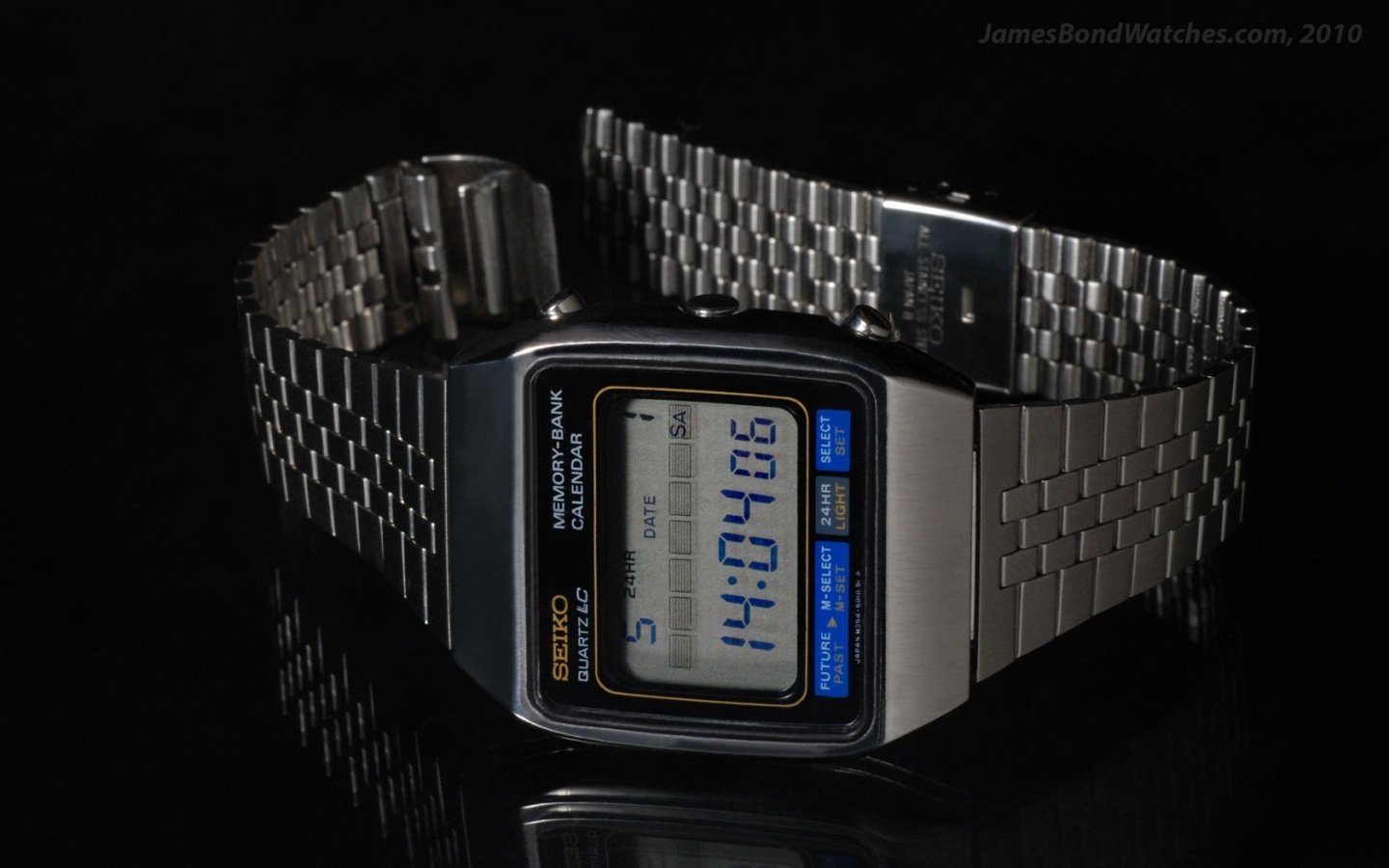 I didn’t show in this article the large number of vintage Seiko watches worn by Bond in various 007 movies. In The Spy Who Loved Me, there’s a beautiful Seiko 0674-5009, for example, but it’s not easy to find one in good condition. For a long time, people have been wearing the heck of out these relatively cheap digital watches. Often, parts are missing or replaced with non-original ones. Other good examples are the Seiko M354 (Moonraker), and Seiko G757 Sports 100 (Octopussy) watches. They’re tough to find in collectible condition, I would say, but they are still more affordable than most other watches listed in this article.

What’s your favorite James Bond watch? Is it the first Bond watch (Submariner 6538), the 1990s Seamaster 300M, or one of the digital Seikos? Or, perhaps, is it the modified Breitling Top Time worn in Thunderball? Please let us know in the comments below.