Just how super is Super Titanium, and what about wearability?
Lex Stolk
comments 11
Share

Size doesn’t matter. Really, it doesn’t. Not to me, anyway. I care more about proportions, shape, and weight. Oh, and please, take your mind out of the gutter, I’m talking about watches. Putting the 46mm the Citizen Promaster Mechanical Diver 200m on the wrist was not a challenge when it came to the sheer size of the watch. No, its bulky appearance didn’t scare me off at all. Mostly, I was curious how this XL creation would behave on a daily basis. And I found out.

I’m ready to put the Citizen Promaster Mechanical Diver 200m with the black strap made of urethane — a polymer elastomer — on my wrist. Furthermore, I’m looking at a typical accordion-style diver’s strap with some nice touches. For instance, the tail-end of the strap has a textured and slightly elevated tip that will stay secure in the keepers, and I like the large buckle with the brand name in luminous material – not only will this watch tell you the time in the dark, it also reminds you what brand you’re wearing.

The case measures 46mm×15.3mm, but as I said earlier, it’s not just the size that matters.

And then there’s the aesthetically pleasing way the strap seamlessly blends into the case; tight and sturdy. Since I used the word “sturdy”, I’ll stick with it: the overall look of the Promaster is just that. The case measures 46×15.3mm, but as I said earlier, it’s not just the size that matters. The angular shapes of the case, the profile and decorations on the bezel, and the low position of the dial also play a part in the sturdy look. 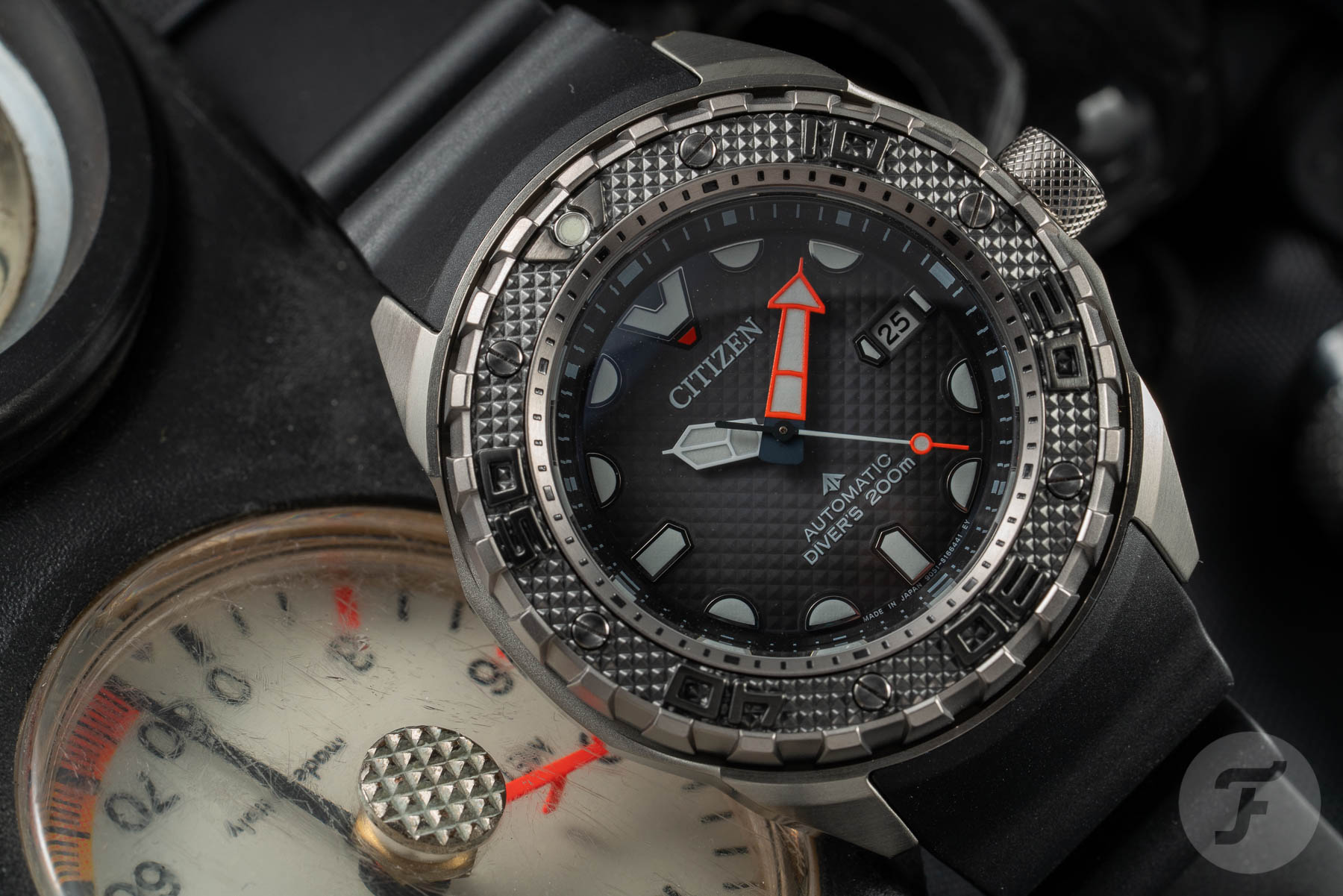 Once on the wrist, the profile of the Promaster is quite something. Citizen went a long way to design a surprising eye-catcher. The bezel turns inside the case and is more exposed on the left and right side. And the angular and robust shapes create a sculptural look you won’t get bored with easily, I think. The “wrist sculpture” is made of Citizen’s proprietary Super Titanium, a material five times harder and 40% lighter than steel as Rob pointed out in an earlier article about the Promaster diver’s watch. He dove into the science behind that alloy and its special Duratect coating. And he also talked about Super Titanium on the moon. Yes, the moon (not deep under the water’s surface). I will, however, stay closer to home and stick to writing about how the Super Titanium Promaster Mechanical Diver 200m wears and feels. 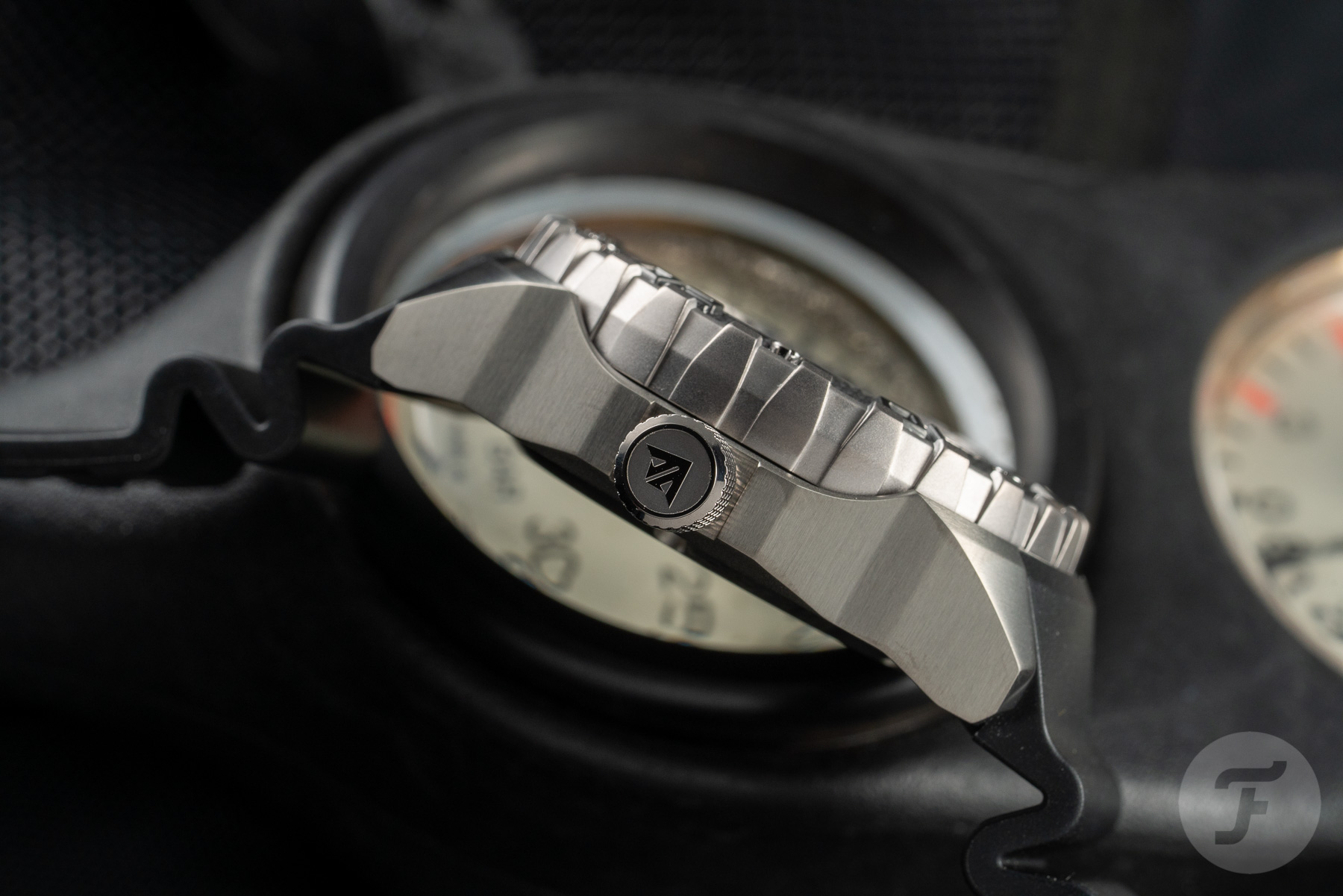 Inside, the seemingly indestructible yet lightweight and scratch-resistant case beats a new automatic 4Hz movement with approximately 42 hours of power reserve. This Cal.9051 uses anti-magnetic materials for the balance spring and surrounding components. According to Citizen, the Promaster Mechanical Diver 200m won’t suffer any performance loss even when placed one centimeter from a device emitting a magnetic field of 16,000 A/m, the equivalent of 200 Gauss. And since according to the ISO 764 standard any watch that is resistant to magnetic fields up to 4,800 A/m classifies as an anti-magnetic watch, the Citizen is, most certainly, an anti-magnetic watch.

… the watch’s accuracy didn’t suffer from Instagram, WhatsApp, or other smartphone activity.

We’re talking magnetic fields generated by everyday devices, including smartphones. But also magnetism aboard ships with magnetic compasses, for instance. I haven’t been near a magnetic compass, but my phone never leaves my side. I didn’t experience that the watch’s claimed -10 to +20 seconds accuracy suffered from posting on Instagram, checking WhatsApp, or other smartphone activities. And to put all things anti-magnetic in a movement perspective, your average mechanical caliber from ETA or Sellita can withstand magnetic fields up to about 4,800 A/m. 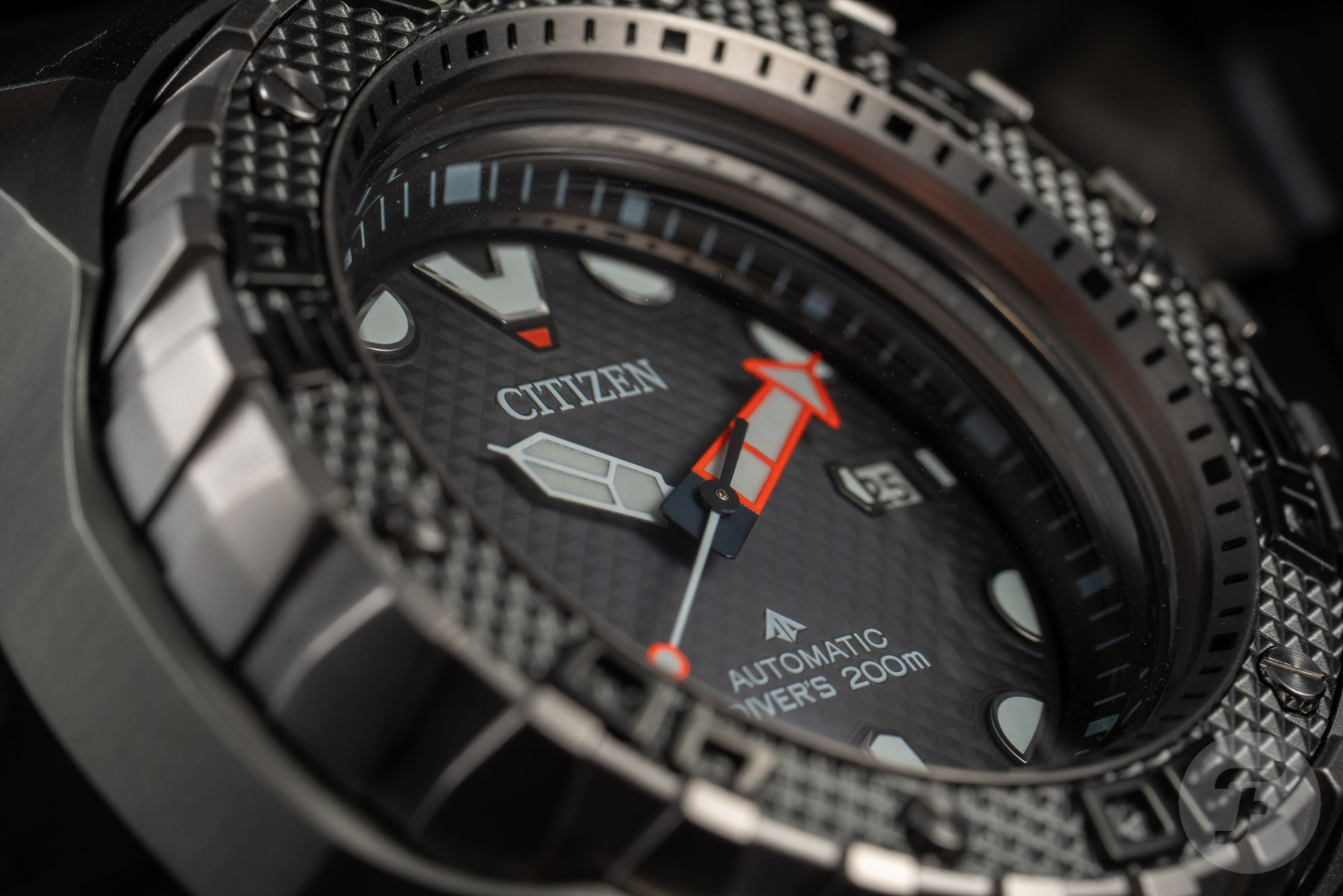 A grippy bezel and a strong green glow

Another aspect of the Promaster Mechanical Diver 200m the International Organization for Standardization is involved, is the water resistance up to 200 meters. The watch received the ISO 6425 certification for that capability, meaning it is good to go deep on a serious dive. The presence of a unidirectional diving bezel and a luminescent coating on the hour, minute, and seconds hand, the indexes, and there’s also one luminescent reference dot on the bezel. And let’s not forget the lume on the buckle I mentioned earlier because it looks so darn neat. 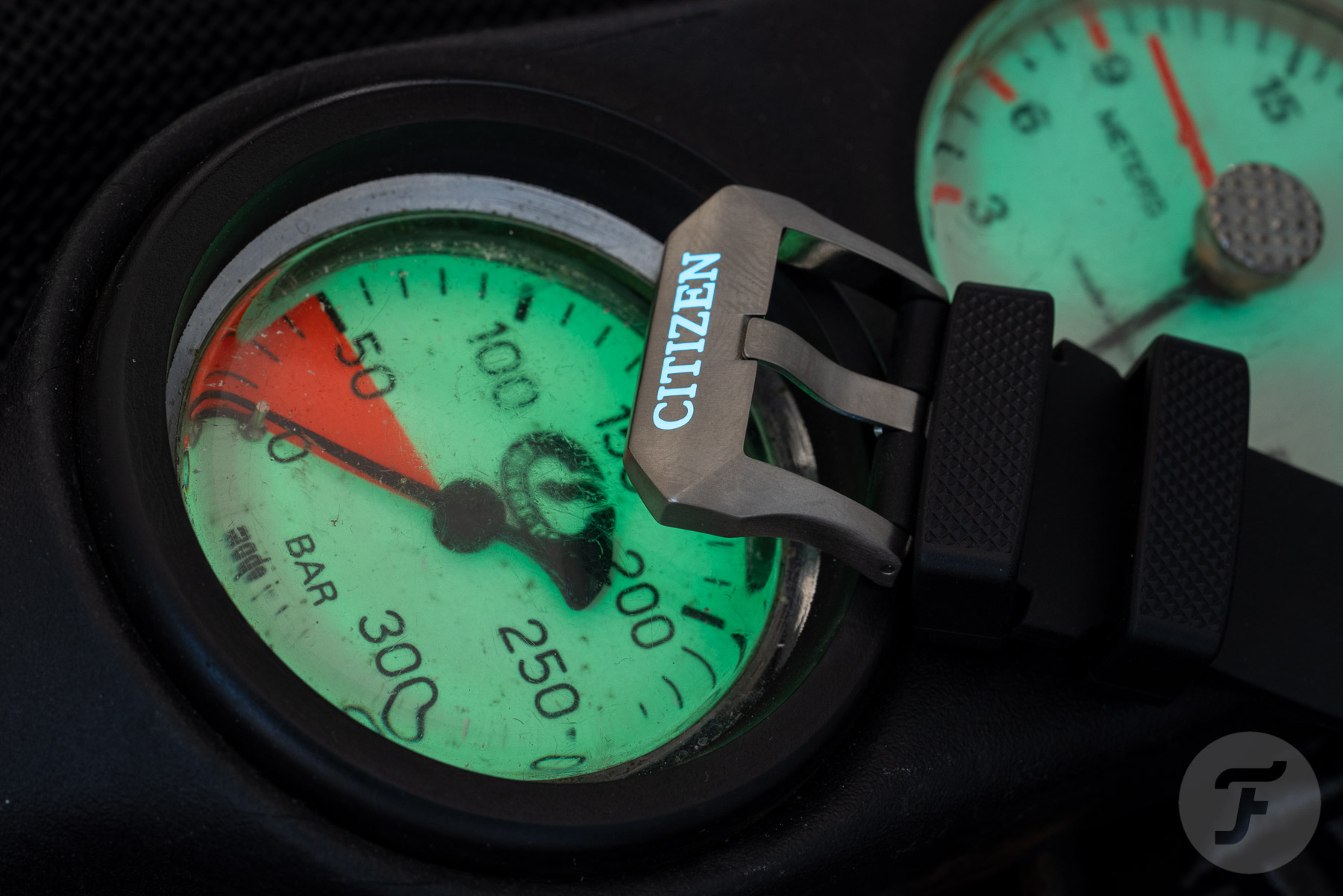 The green glow is strong in this watch and in daylight you also get a bit of orange, which helps keep perfect track of the seconds and minutes. Not everything is very clear, though. The numerals on the bezel — with its trapezoid indentations that make it very easy to grip — are in relief, but they blend in since everything is executed in titanium gray tones. It looks cool, highly detailed, and even industrial, but it is a bit difficult to read at a glance. 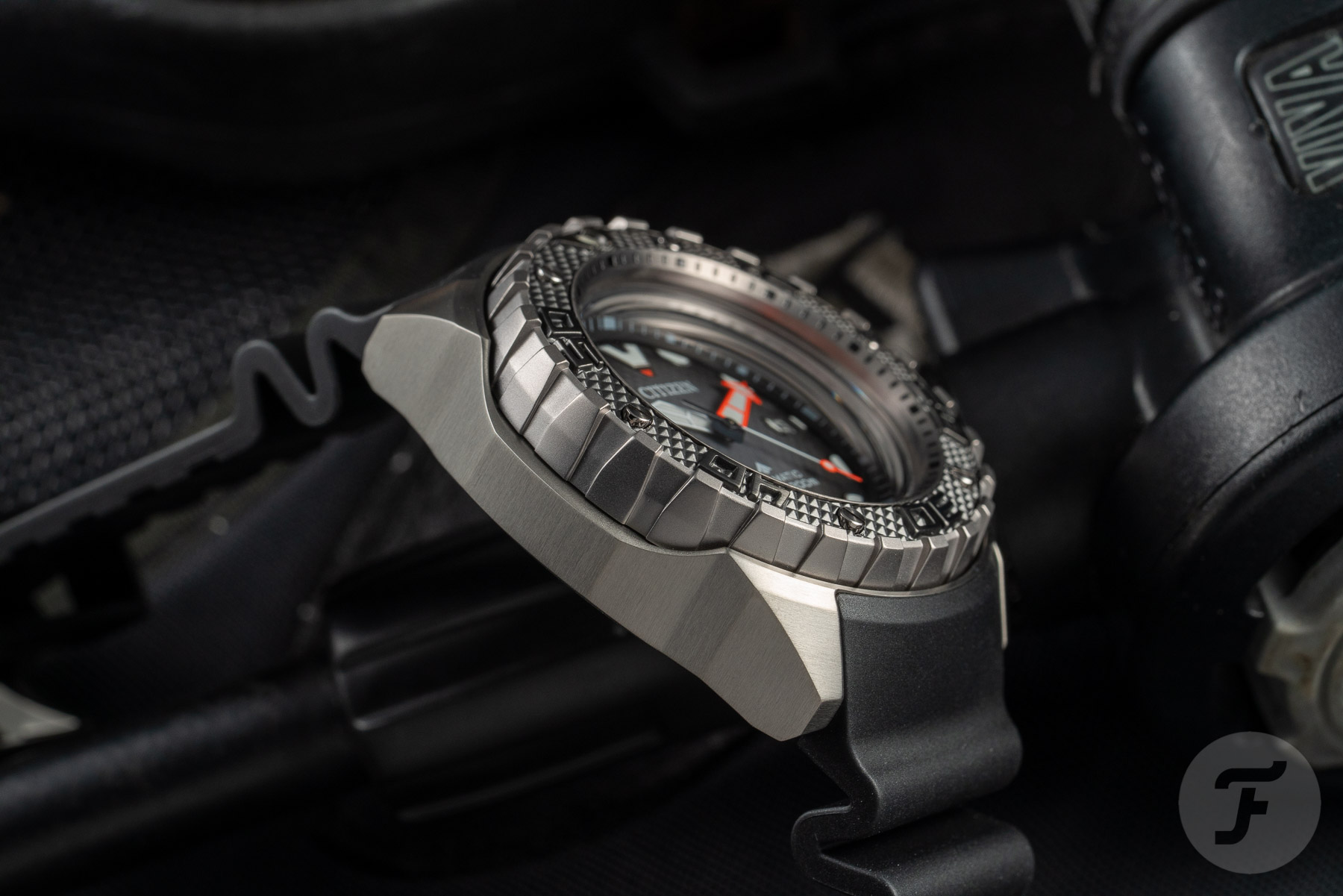 There’s another visual aspect of the watch I keep noticing, and that’s the depth of the dial. It sits very low under the domed sapphire glass with anti-reflective coating. It’s like looking into the abyss, or no, even better, one of those 300m deep water-filled sinkholes in northeast Mexico. Once your eyes reach the “bottom”, you will notice that the stud-like pyramid pattern on the bezel is also used on the dial. And that dial shifts from gray in the middle to black on the edge. A very subtle effect that plays well with the shades and patterns on the bezel. 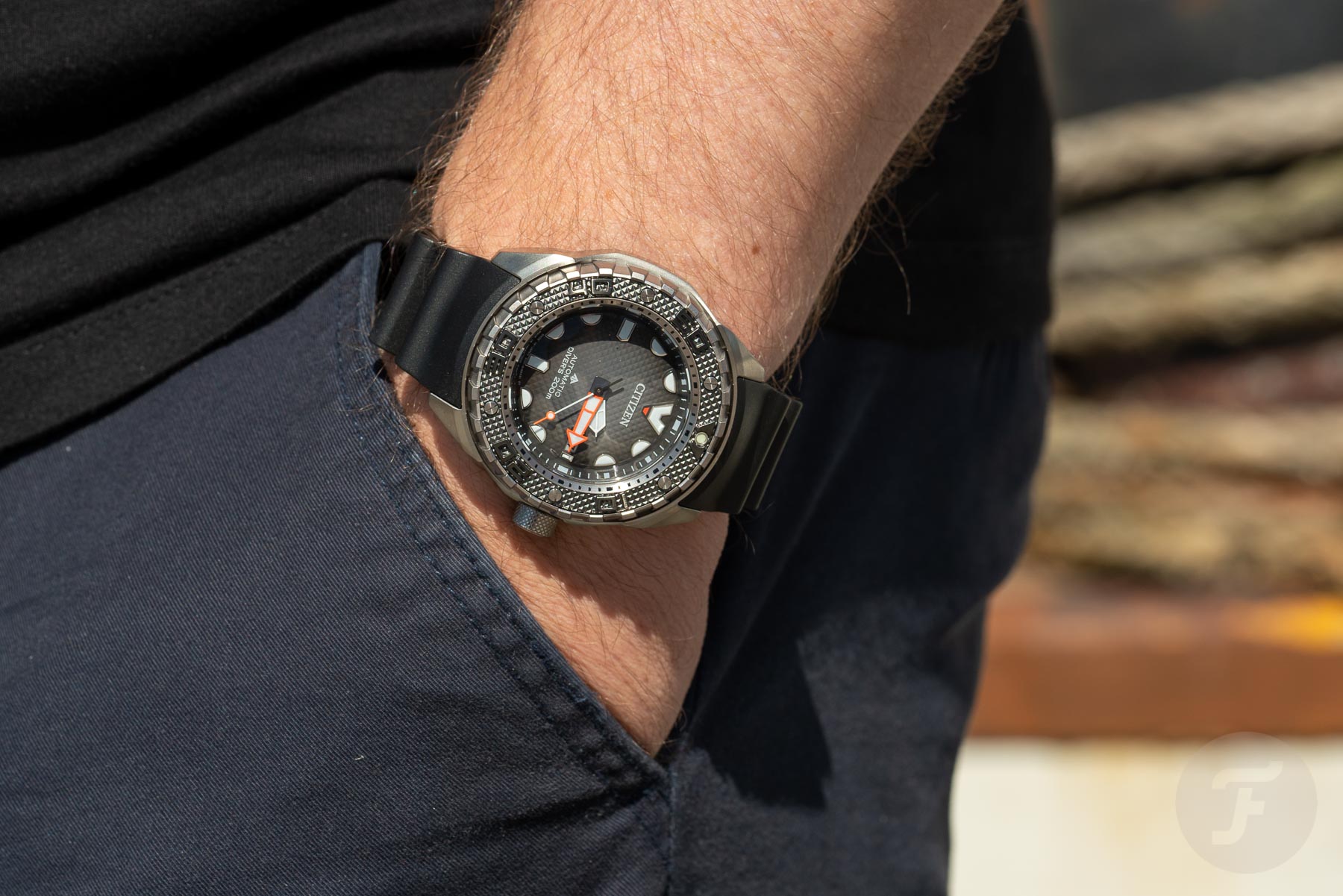 A 46mm case, a urethane strap, and hot weather

I didn’t do any deep-sea diving with the Promaster to test its functional capabilities, but I guess this watch will mostly be deployed during weekend trips, dips in the pool, lake, or sea, and maybe some sailing or hiking. So I took it on a sunny hike through the forest, the dunes, and eventually to the beach. Wearing a 46mm watch on a urethane strap in warm weather while exercising can be a sweaty experience. But because of the relatively low weight of 105g, the titanium case, and the way it sits on the wrist it’s a good experience.

Sure, if you take the watch off after a day on the wrist you will see some markings, but every watch leaves a “memory” on the skin in hot and humid conditions. A big advantage is that during hot days, cooling down can be done without taking off the watch. I guess you’ll be doing the Promaster Mechanical Diver 200m a favor when you take it to its natural habitat, or the remote outskirts in my case. 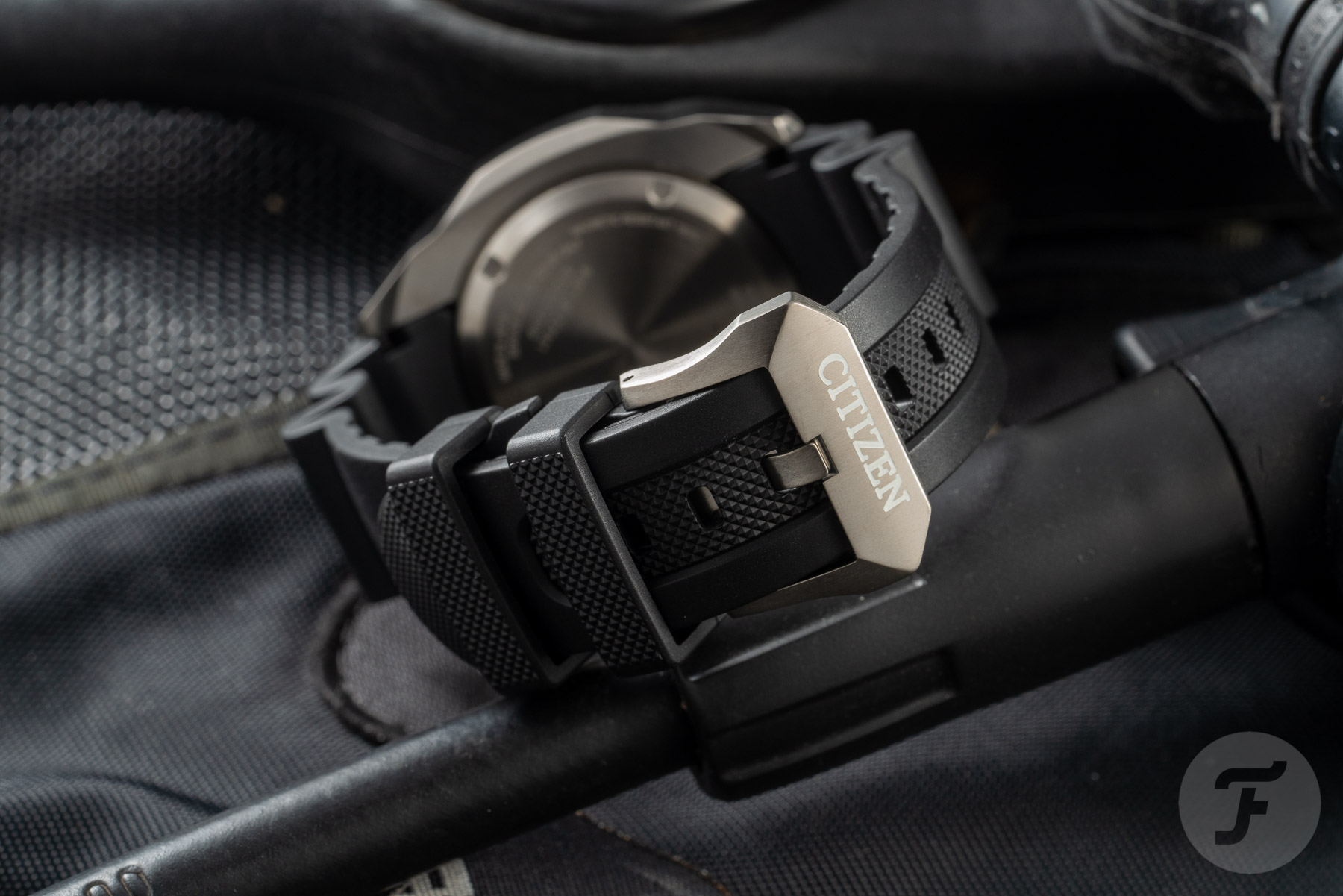 For its size, the Promaster Mechanical Diver 200m is a light watch with great wearability. It may not be a daily beater, however. Because of its 46×15.3mm size, you can’t fit under a shirt. It also has an undeniably utilitarian appearance. This watch is an instrument. It is a diving instrument AND a weekend warrior ready to take on any outdoor activity. The ref. NB6004-08E with urethane strap I wore has a price of €695. 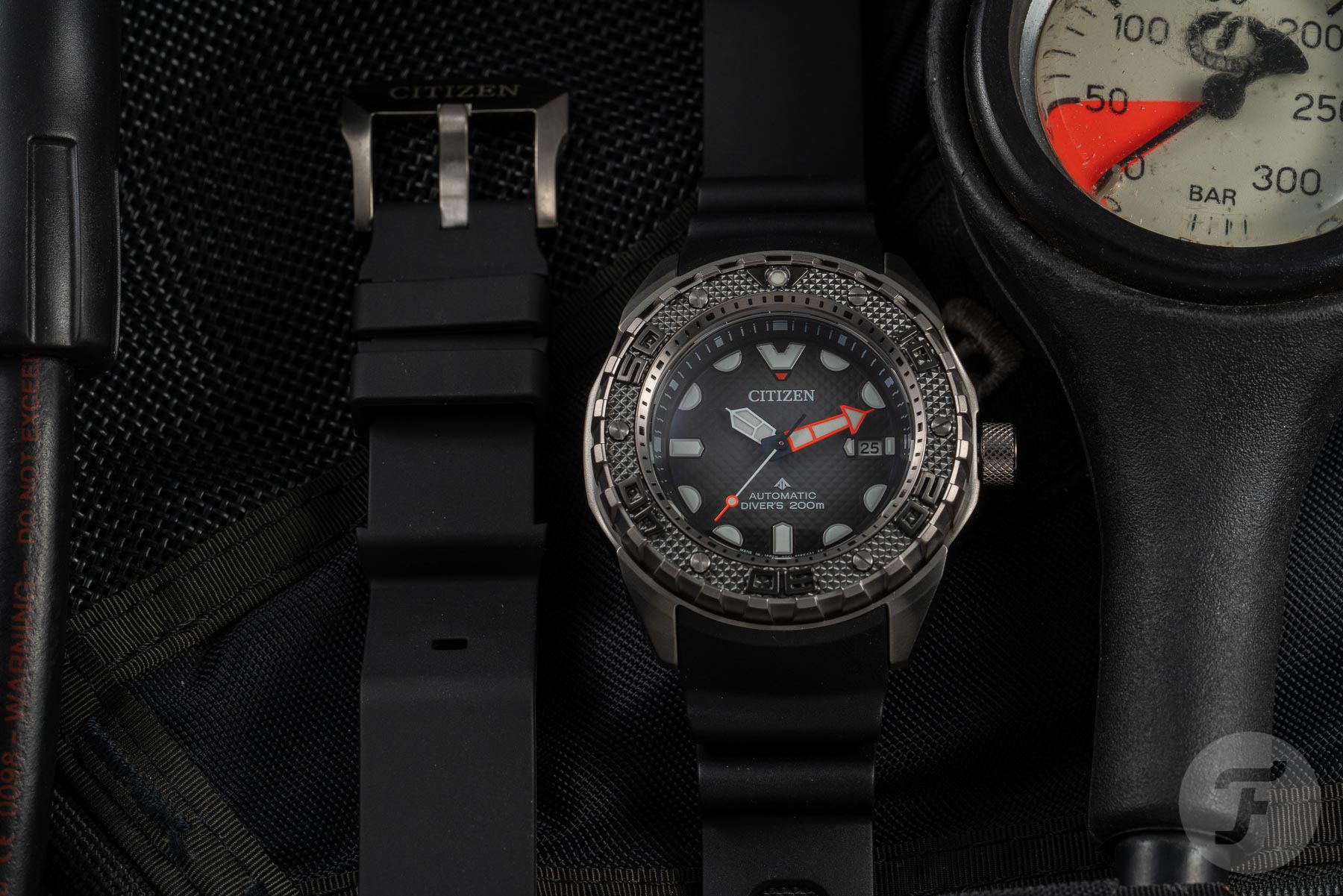 There’s also a version with a bracelet in Super Titanium, the 147g ref. NB6004-83E, which costs €100 more. “Bang for buck” is something that really applies to both XL Promaster Mechanical Diver 200m watches. The water resistance is something really practical, and so are the scratch resistance qualities. And although the anti-magnetic properties of the Promaster Mechanical Diver 200m may not be the watch’s strongest selling point, it won’t hurt either. Better safe than sorry, right?