Yo, Ho, Ho, And A Bottle Of Rum! Hands-On With The Rado Captain Cook Automatic Chronograph In Bronze

Let’s be honest, how many of you would choose to take the Rado Captain Cook Automatic Chronograph on a sailing trip around the world? The watch is named after Captain James Cook, the famous British 18th-century explorer and cartographer, but I doubt the watch’s buyers follow in the famous navigator’s footsteps. Twenty-first-century life for most doesn’t include navigating thousands of miles across largely uncharted areas of the globe. Instead, we explore metropolitan areas and the great outdoors that is, quite often, not so great any longer. Still, it’s nice to take a bit of adventurous nautical inspiration with you on the wrist. The Rado Captain Cook Automatic Chronograph in bronze is just that. So yo, ho, ho, and a bottle of rum, and away we go for a hands-on review!

You don’t have to set out to map lands from New Zealand to Hawaii in the Pacific Ocean in great detail anymore. Captain Cook already did that for you. What you could do instead is take a cruise in the Pacific Ocean and enjoy the bronze Rado Captain Cook Automatic Chronograph (€4,750) in its inspirational habitat. Or you could just wear it around the urban area you probably live in. The watch has a strong nautical influence, but in the end, this watch is more about looks than marine functionality. And there’s nothing wrong with that in my book.

… a most welcome aura of analog adventure in a digital and sometimes artificial world.

Modern-day tool watches are, in 99.9% of the cases, not worn to do the job that they’re intended for. Instead, the tool watch has become a storyteller. Some of its ruggedness might even wear off on the person wearing the watch. It will bestow its wearer with a most welcome aura of analog adventure in a digital and sometimes artificial world. 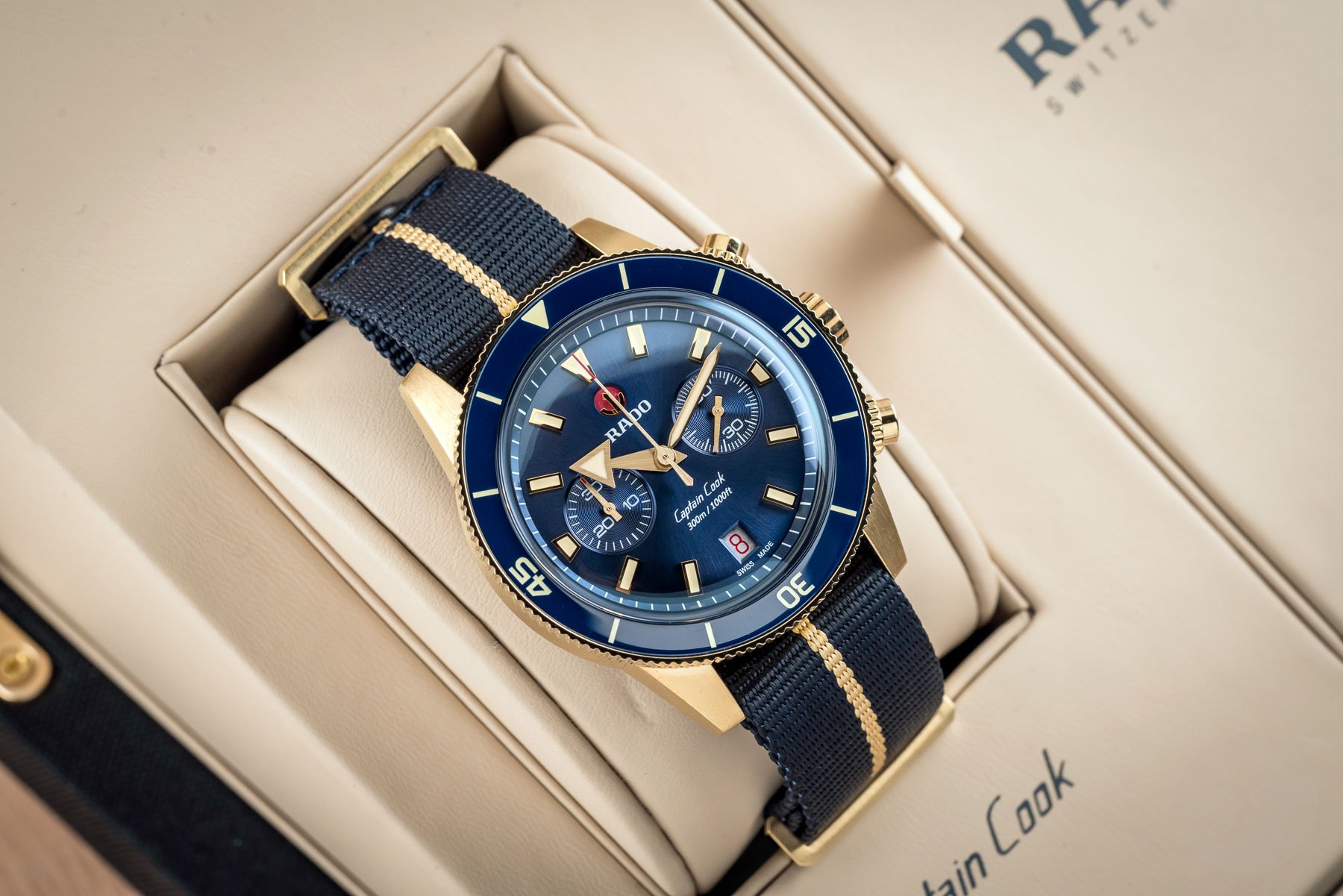 The origin story of the Rado Captain Cook Automatic Chronograph

The first Captain Cook was a 37mm dive watch that debuted in 1962. And one of the latest creations bearing that name was the surprising Over-Pole, a limited-edition watch inspired by a circa-1962 travel timepiece. When you wear a modern-day Captain Cook — the model came back in the Rado line-up in 2017 — you tell your friends these origin stories, both of the captain himself and the vintage nautical watches that were named after him. The Automatic Chronograph is the latest storyteller of the quite expansive Captain Cook collection. But what kind of story does this watch tell, exactly?

The most important story this chronograph tells you is that it doesn’t want to sail under the cover of night. This watch wants to present itself in broad daylight under a cloudless sky. First of all, the large case attracts sufficient attention — 43 × 49.5 × 14.8mm dimensions will do that. Then, the golden-bronze material, the blue sunray dial, and a matching polished ceramic insert give it flair. No doubt about it — this Captain Cook has an outgoing character. 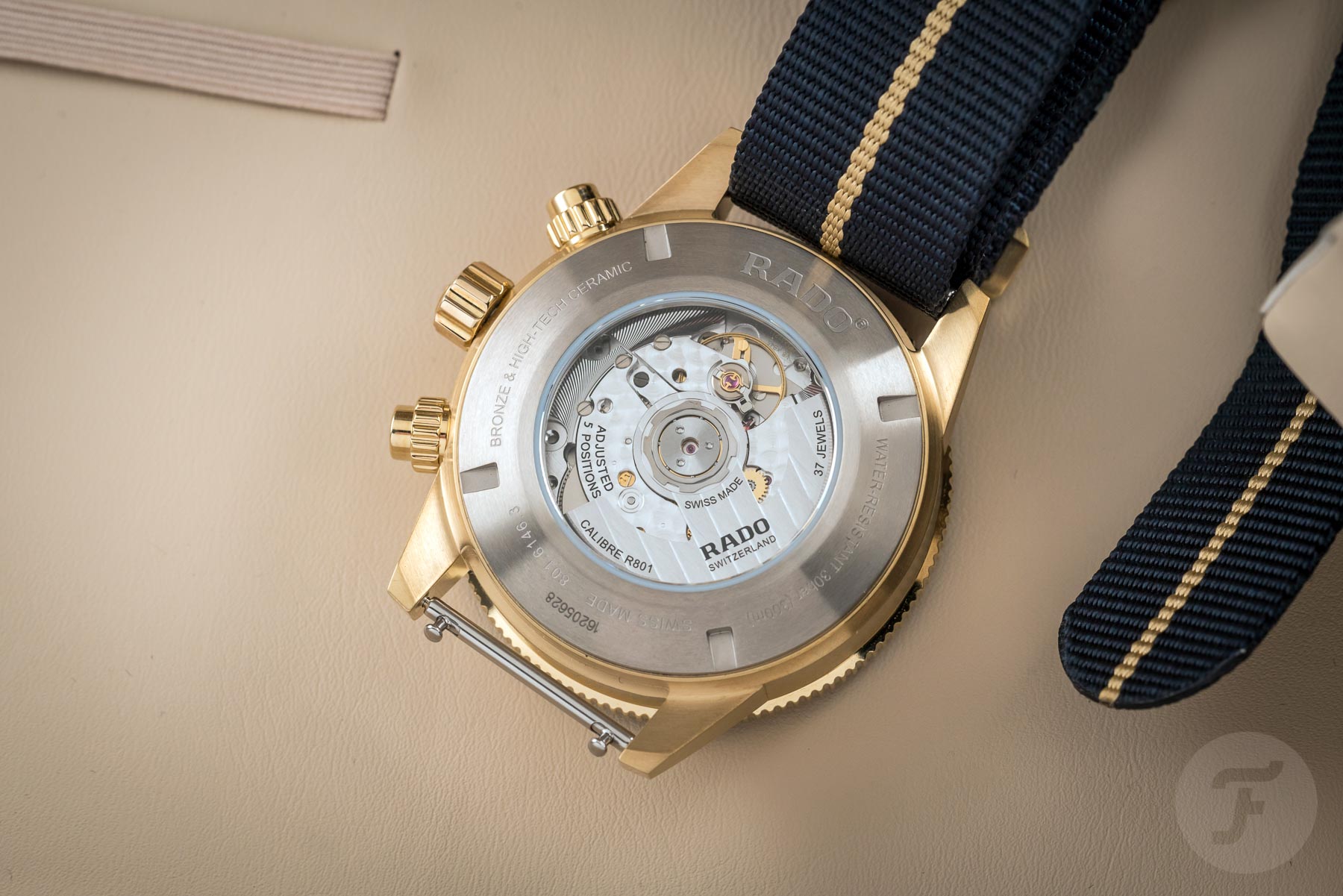 To the heart of Captain Cook

Through the exhibition case back, you can see the insides of the Captain Cook Automatic Chronograph. What you see is the new automatic R801 movement, a modular chronograph based on the ETA A31. This explains why this Captain Cook is quite a porky fellow. By the way, the base movement is an evolved version of the proven ETA 2894, so it’s both accurate and reliable. What you get is a 4Hz movement equipped with a Nivachron anti-magnetic hairspring and a power reserve of 59 hours. The caliber provides hours, minutes, small seconds, a date indication, and a chronograph with central seconds and a 30-minute counter. 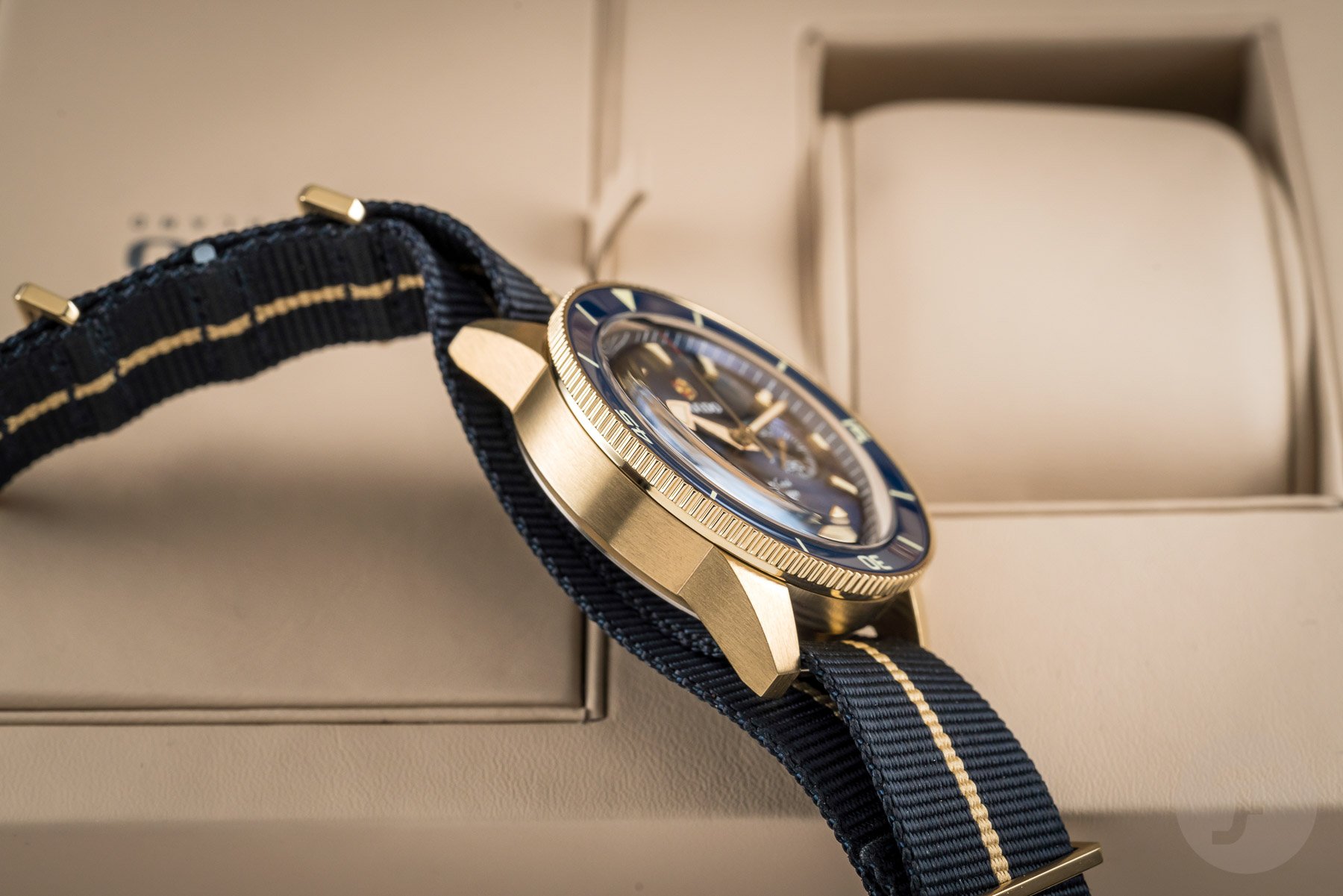 A watch of substance

The Rado Captain Cook Automatic Chronograph is a watch of substance in both the figurative and literal sense. I covered the storytelling angle, but it is also quite substantial in the metal. It weighs a solid 100 grams, for instance, and the watch comes with no less than three straps in its presentation box. I also need to mention some important details that help give this diver’s chronograph its substance. Those are the box-shaped sapphire crystal with anti-reflective coating on both sides, plus the screw-down crown, pushers, and case back that ensure water-resistance of 300 meters. Yes, the bronze Captain Cook Automatic Chronograph is a professional diver in casual-chic attire. It could do the job it was intended to do, but it would rather stay on shore to gallivant down the boulevard instead. 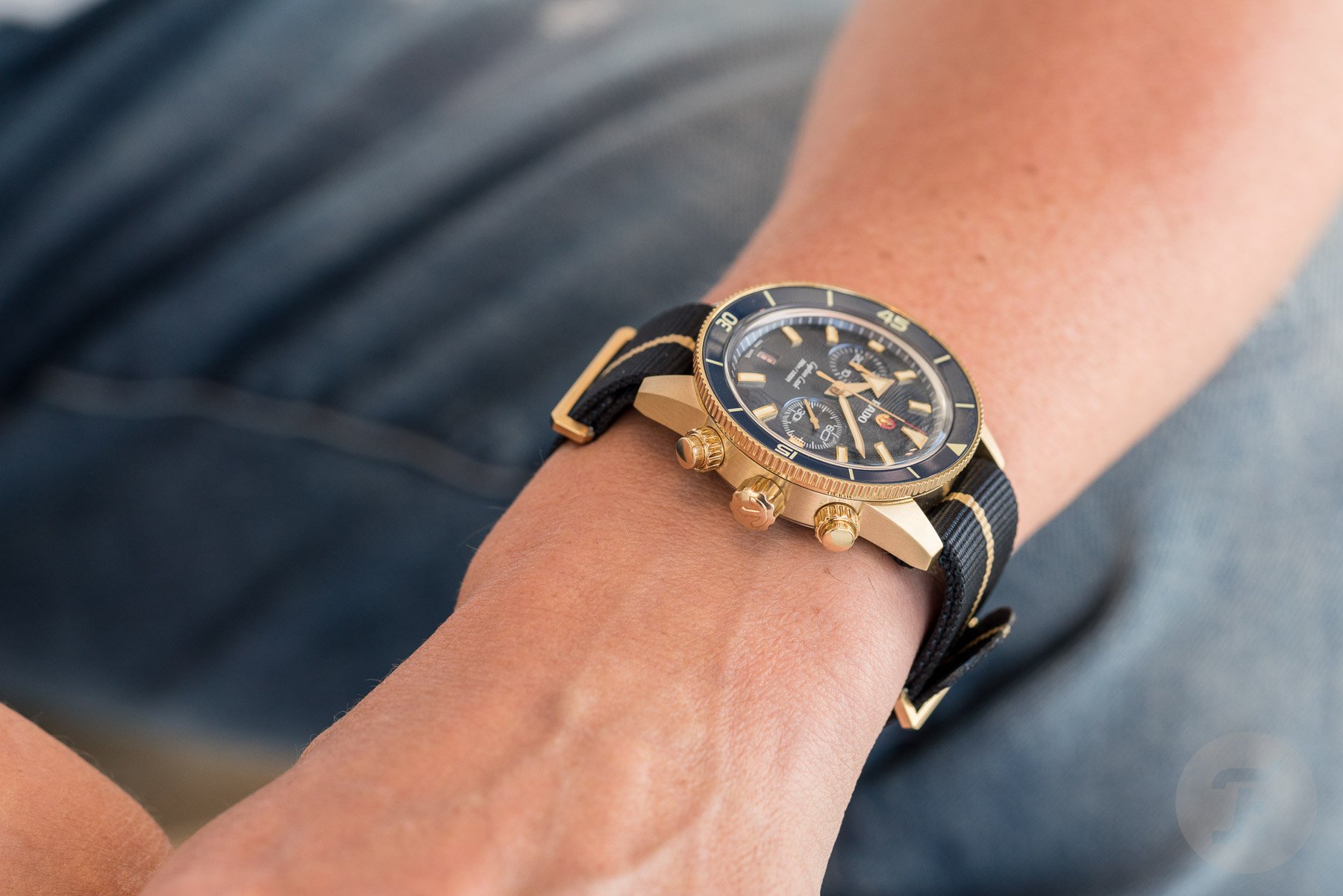 The Rado Captain Cook Automatic Chronograph in the metal

I didn’t try the gallivanting part with the Captain Cook Automatic Chronograph, but I did wear it for a while. It wears quite big, I have to say. That’s because of the size, yes, but also because of the colors and its shiny overall appearance when new. The colors on the bezel and the curved, gradient dial will stay very blue and very noticeable. Over time, though, the bronze will tone down in color and glow because of the oxidation of the metal. Regardless, the watch is clean and offers great legibility. It comes with two NATO-style textile straps that wear very comfortably, plus a leather strap with quick-change pins for easy swap-outs. 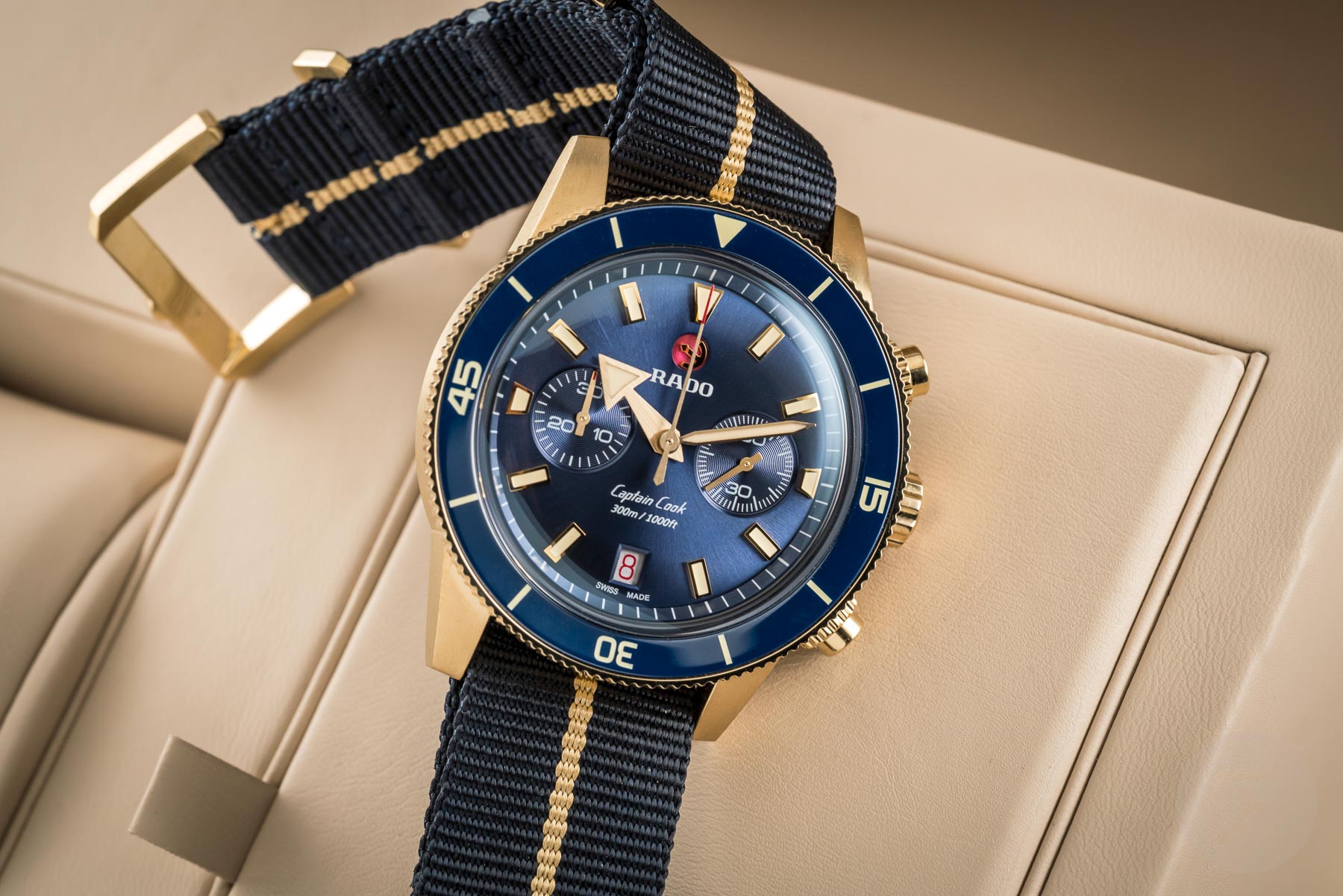 On the more practical side of things, the applied indices and the sword and arrow hands have all received Super-LumiNova. This ensures that reading the time is always a breeze. Do you need the signature rotating anchor at 12 o’clock? No, but it’s a nice little decorative talking point. The date at 6 o’clock, on the other hand, is a practical function for daily life. 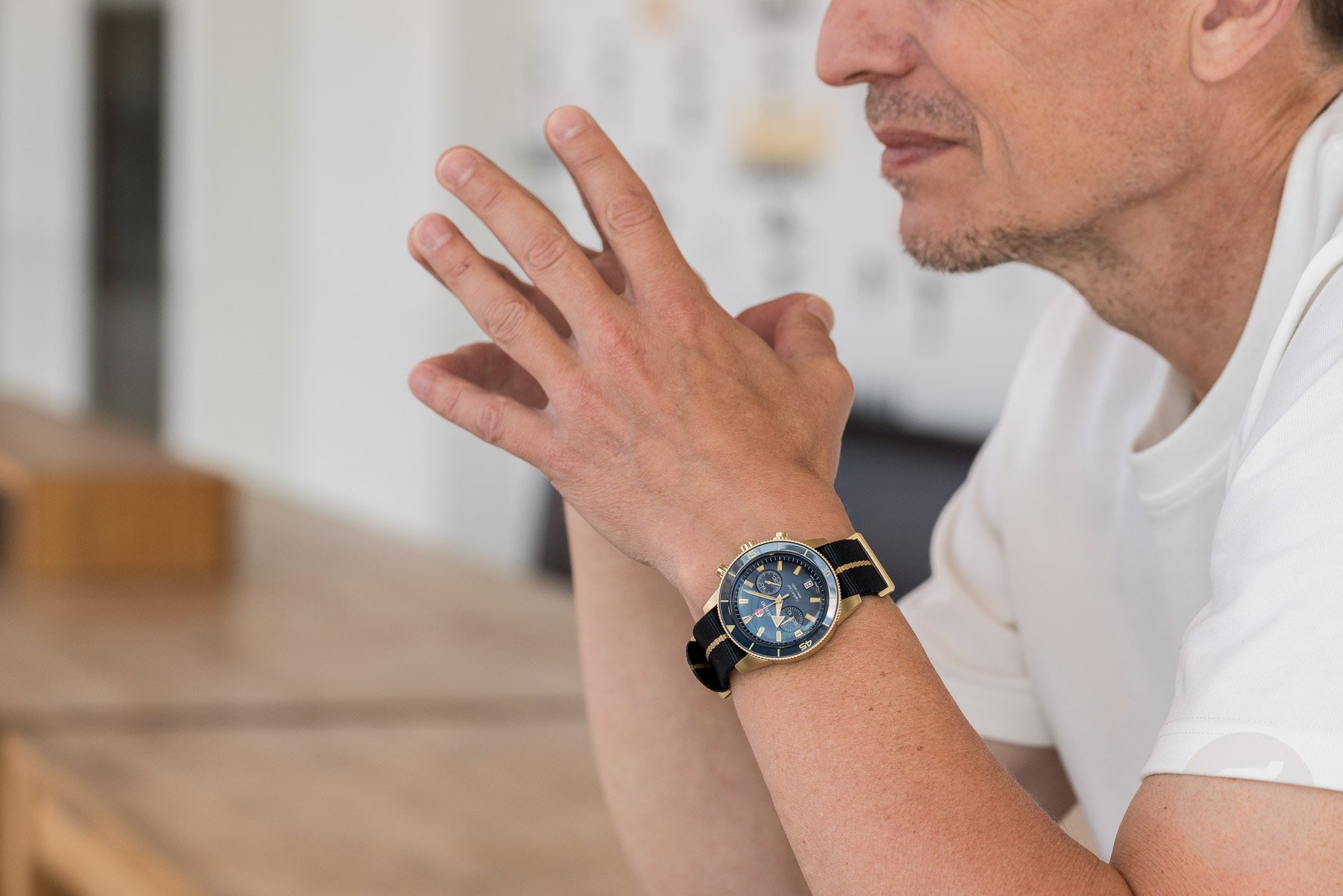 So maybe singing “yo, ho, ho, and a bottle of rum!” doesn’t fit the Rado Captain Cook Chrono Bronze quite as much as I thought at first. This is not a watch for aspiring sailors, wannabe swashbuckling pirates, or self-proclaimed fearless navigators of the high seas. Instead, this watch seems to be tailor-made for landlubbers. Urban navigators looking for the best cocktail bar in town where they will order a Dark and Stormy – a mix of ginger beer and dark rum, some ice to cool things down, and a slice of lime for extra zest and color that creates a rich, spicy drink. And while holding the cocktail in your left hand, the watch will get noticed because of its size and colorway. For €4,750, the bronze Captain Cook Automatic Chronograph does an excellent job of that. It’s a glowing watch that looks rich and lustrous but also sporty and fashionable.

Purist watch lovers with a purist take on things might not want to step on board with this Captain Cook. But for those who don’t mind a bit of mixing and matching of traditional inspiration with a flash of contemporary spice in the design, this quite exuberant bronze chronograph could be just right. It will get you noticed if that’s what you’re after.

For more info about the fleet of Captain Cook watches and this bronze Automatic Chronograph in particular, please navigate to Rado’s official website.