The Panerai Luminor PAM00116 was never an outrageously flirtatious watch. Made between 2002 and 2003 in a series of 300 pieces, this 44mm model was the titanium version of the steel Luminor Base PAM00118. The brown dial was the most exotic feature, if you don’t count the grayish titanium, that is. Still, that lightweight alloy is always more technical and functional than attention-seeking by nature. But a renewed meeting with the watch sparked something in me. Twenty years after first seeing it, this particular Luminor brought back some memories. I’m sure you’ve also had this same kind of experience with watches from your past. And if you can’t think of any to talk about in the coffee corner this Monday, maybe you can steer the conversation towards new diver watches like the skeletonized Captain Cook High-Tech Ceramic LE or the tropical Cuervo y Sobrinos Buceador Caribe “Pipin Ferreras” Edition.

The absence of a seconds hand can be refreshingly soothing. Take Gerard’s Panerai Luminor PAM00116 — a watch I’d never seen him wear before — as an example. In every way, this Luminor is all about the essence of a watch. And with its stripped-down look, the titanium PAM00116 from twenty years ago looks forever fresh and relevant. Because of the 44mm case, the watch is hard not to notice on someone’s wrist. But because of its deep brown dial and brushed titanium case, the 300-meter water-resistant dive watch shows some restraint. 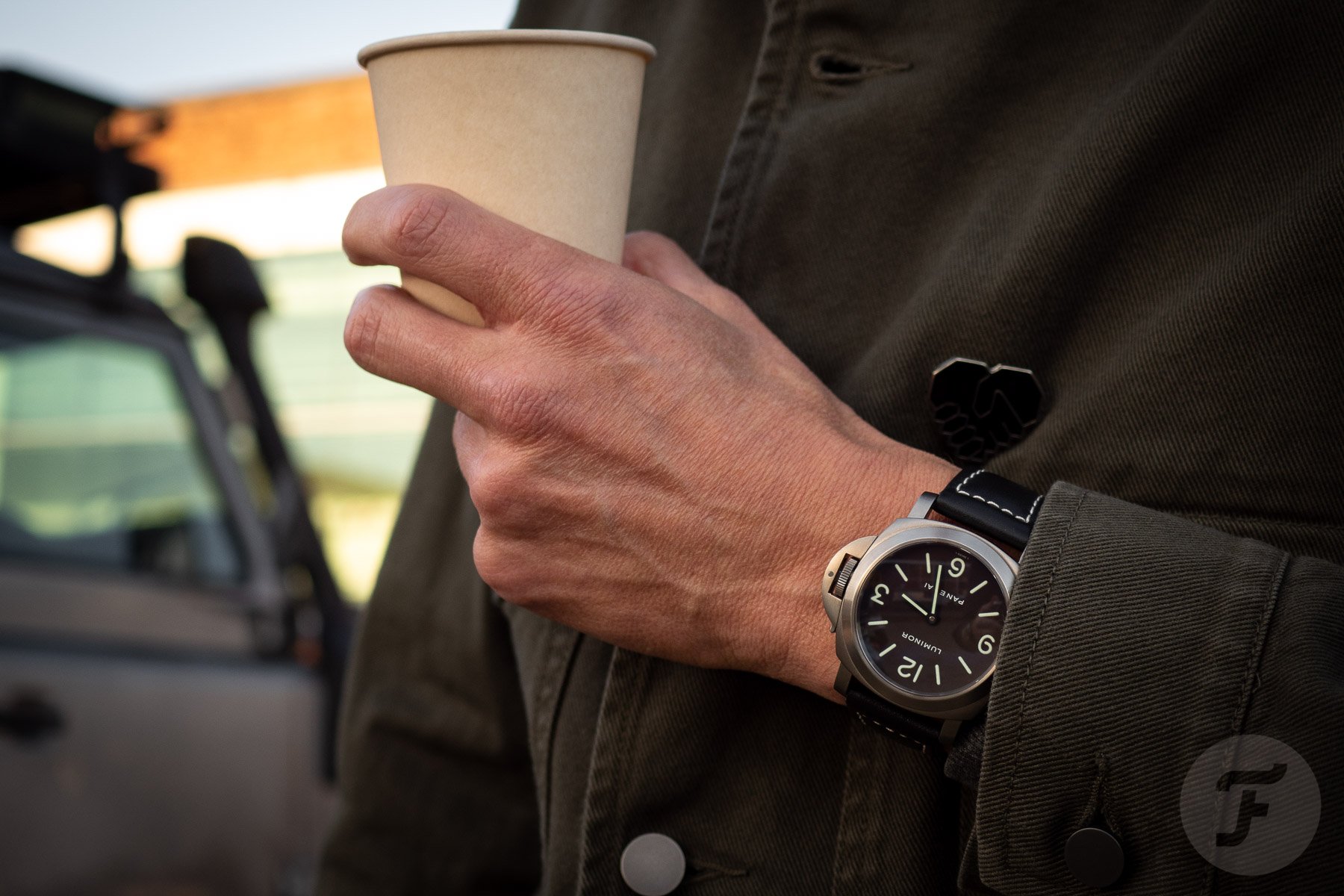 Once I managed to get this Panerai off of Gerard’s wrist, the watch came alive even more. Everything about this timepiece is large and straightforward. There’s the immense 24mm lug width, which equals a lot of leather hugging the wrist. But that also leads to a snug and comfy situation. My 18.5cm wrist has no problem accommodating the 44mm case, and with the strap neither too loose nor too tight, it creates a kind of wear-and-forget experience. The watch made me reminisce about the days when Panerai was the talk of the (watch) town. It was with watches like the Luminor PAM00116, a limited series of 300 pieces, that Panerai created a hardcore fan base. And while wearing this Luminor, I could easily feel why once again. On the wrist, the watch’s simplicity becomes its USP. 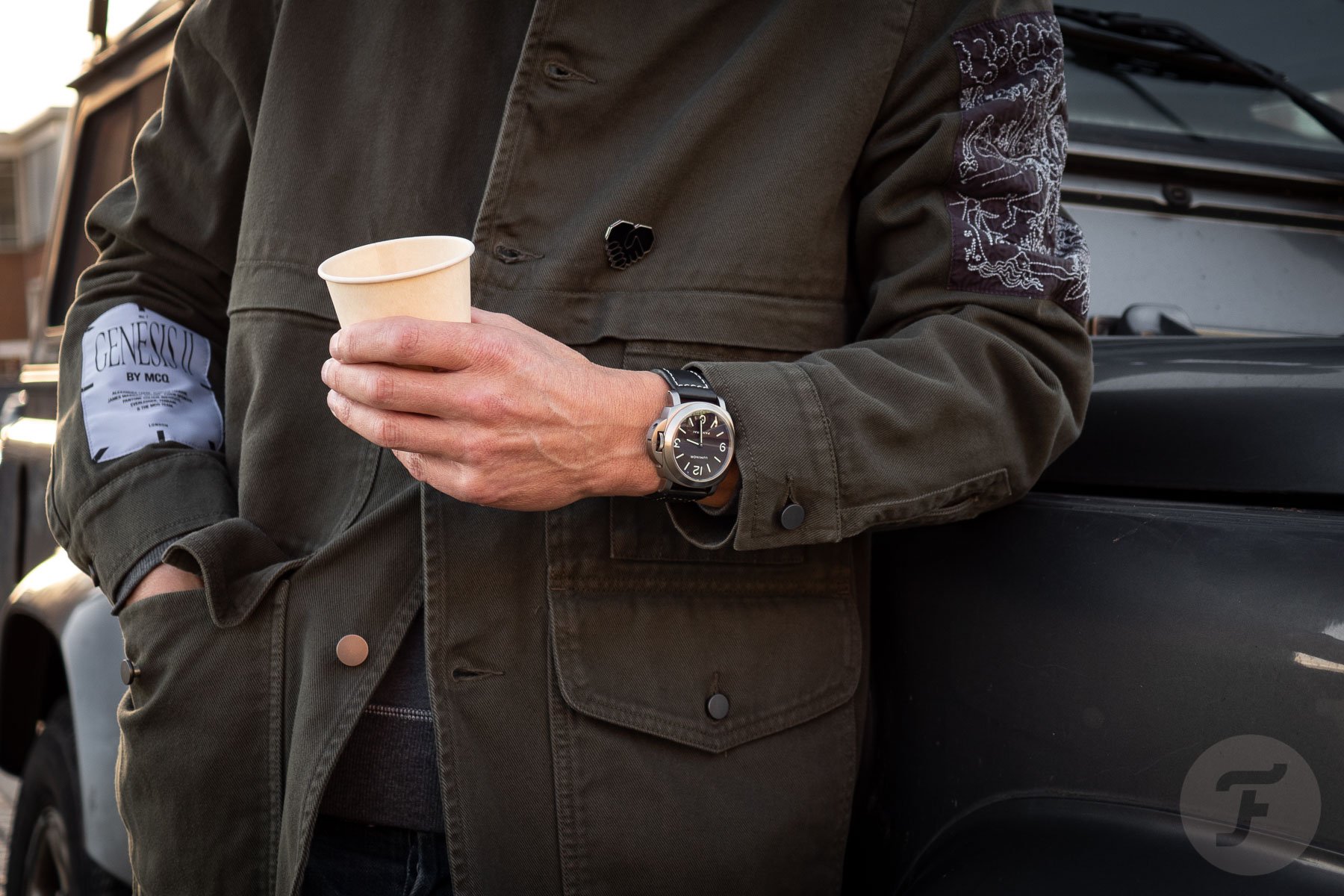 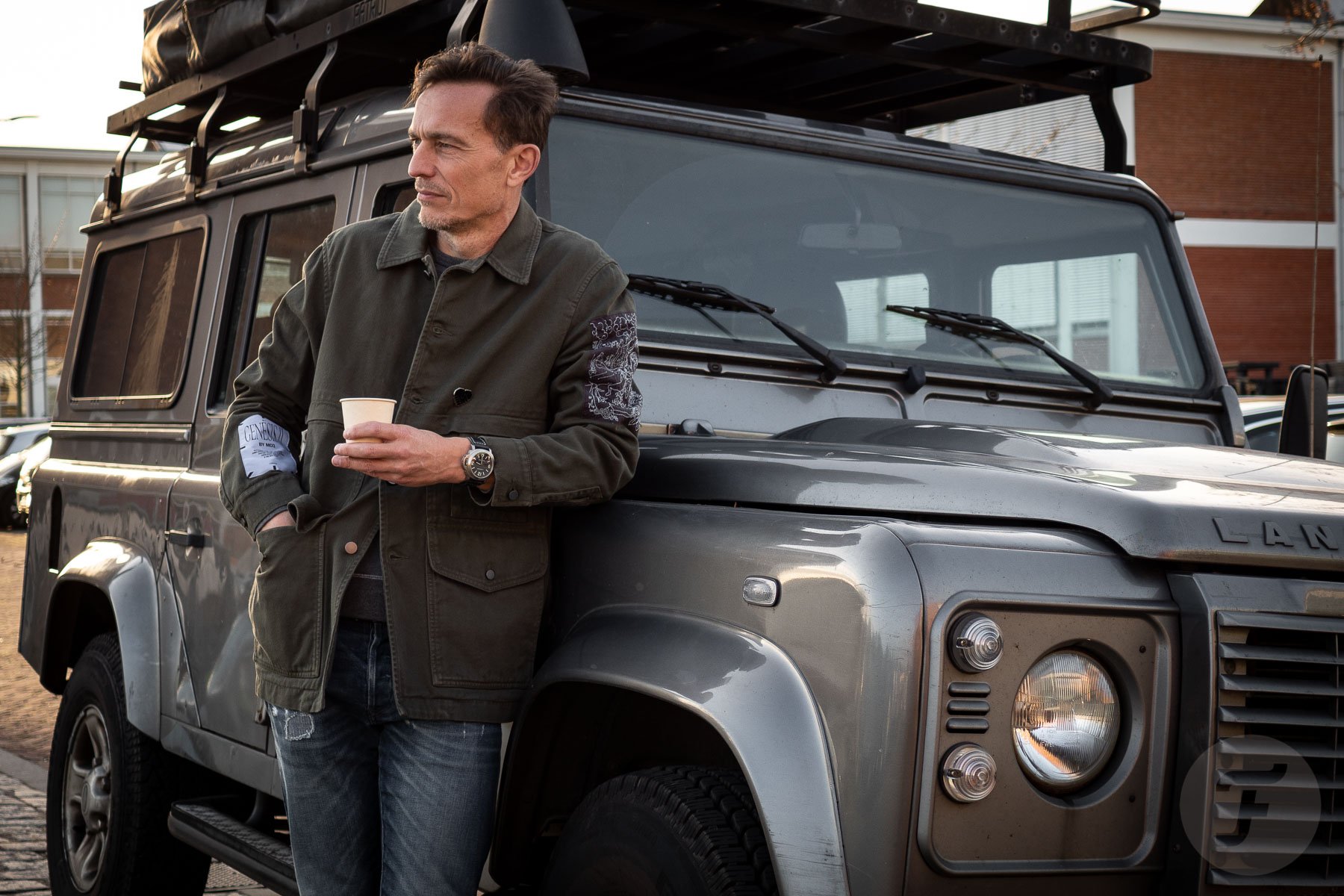 You could argue that the Panerai Luminor PAM00116 is not very special. The hand-wound 21,600vph caliber OP X with a power reserve of 56 hours is not exactly a sublime masterpiece of high horology. The caliber started its life as a 3Hz, 46-hour-power-reserve ETA 6497-1 — a movement that also functioned as a base for other Panerai calibers like the OP I, OP II, OP XI, and OP XXIX — and to spice things up a bit, there is some Panerai-specific decoration on it. It clearly shows that Panerai was still trying to figure out what it was as a brand, where it wanted to be, and where it wanted to go in the future. It looks endearing in a way. 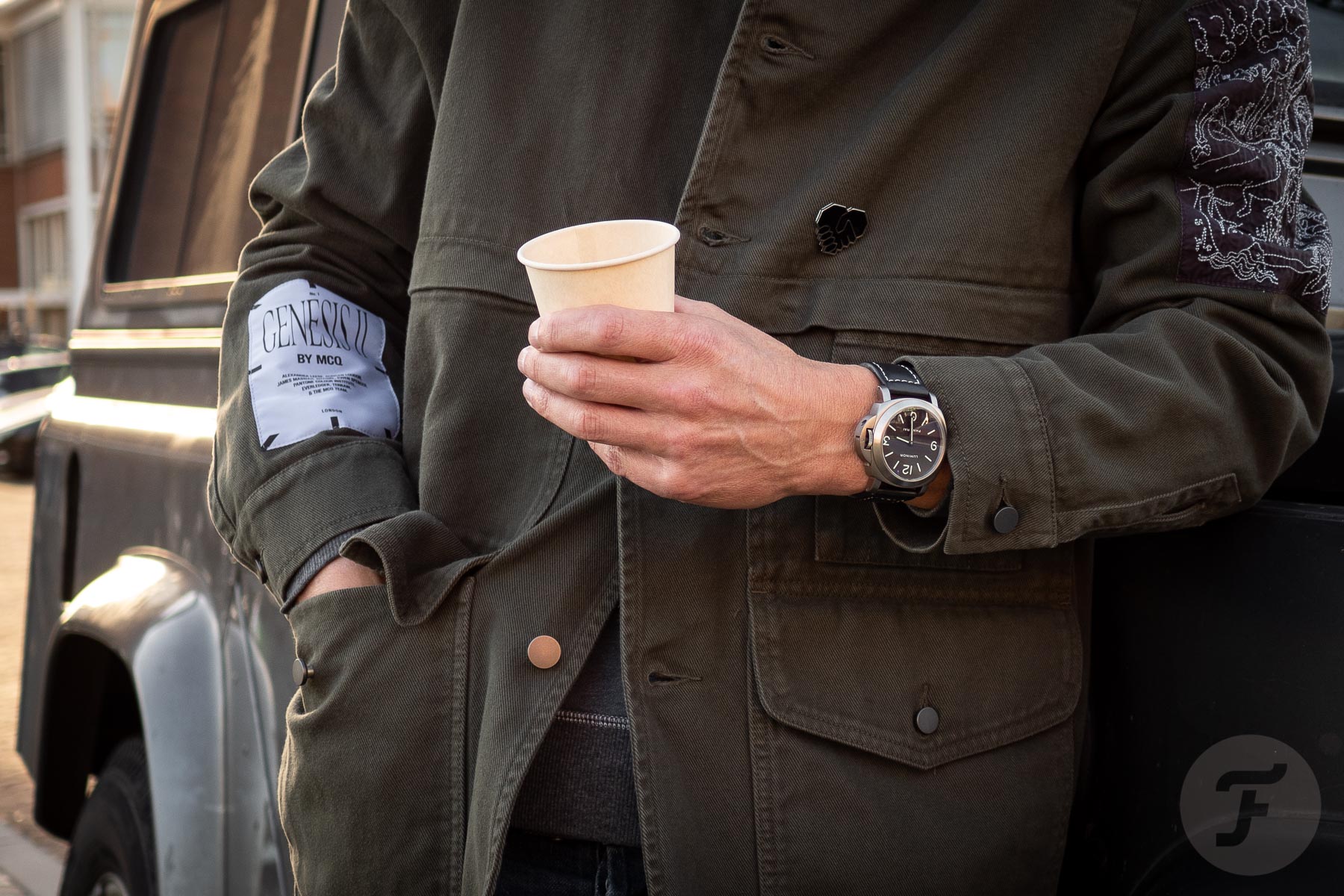 The dial is, like the movement, a clear-cut deal. Yes, I prefer a sandwich dial when it comes to Luminor models. Having said that, the specific font type and the way it shows on the deep, dark brown background is a very pleasant sight indeed. This Luminor PAM00116 is all about the essentials. It doesn’t need frills to make its point. The titanium makes sense because it lightens things up — the Luminor is massive in every aspect — and brings the benefit of a dark gray color that is subtly distinctive. This PAM00116 is not a pretentious watch, and partly because of that, I think it’s a classic. You might want to have a look at Chrono24 to see what prices are like for this classic Luminor with an understated twist. 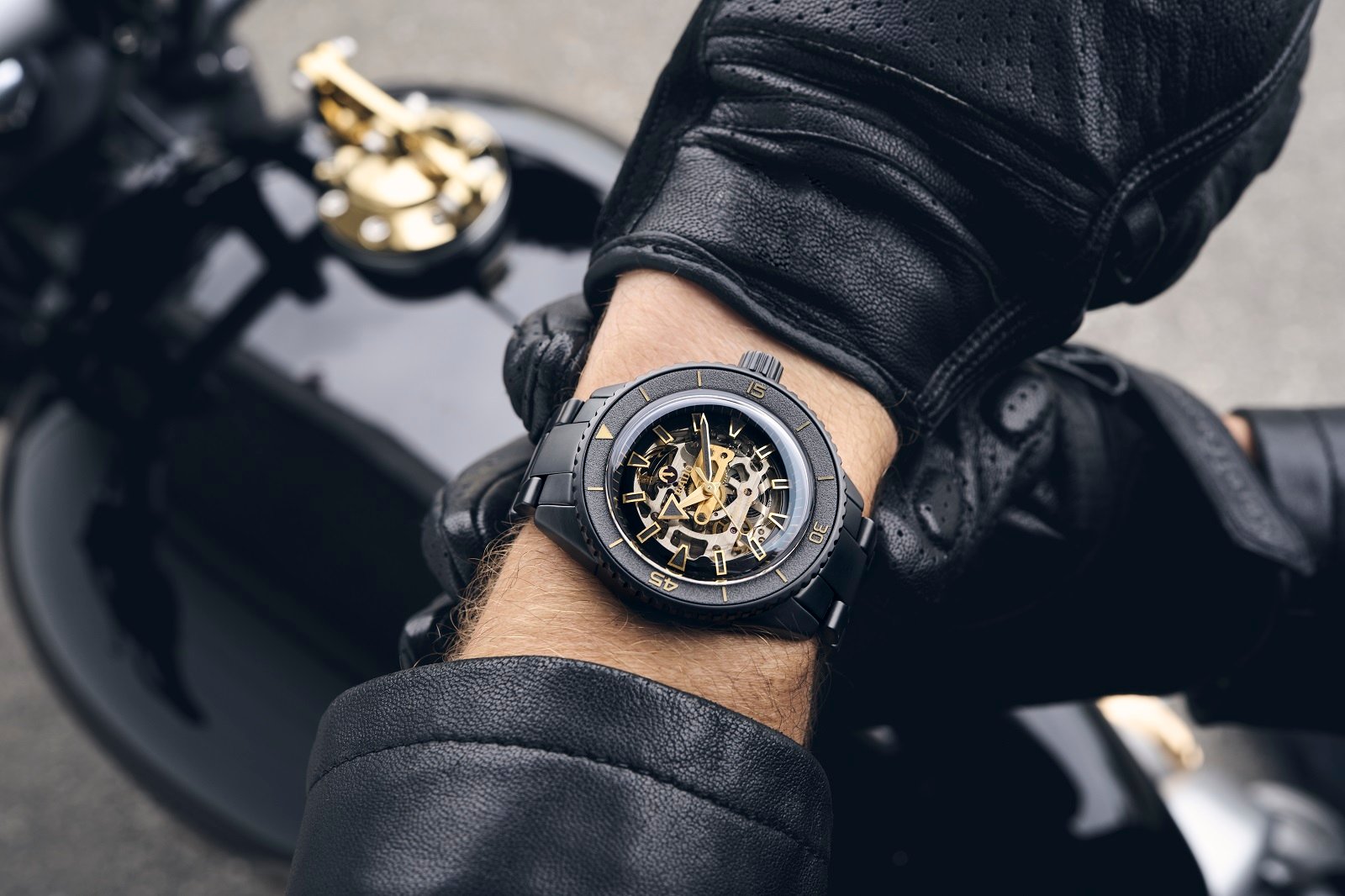 I’m not sure if the Rado Captain Cook High-Tech Ceramic LE (€5,000) is going to be a future classic. You might know that I’m not the biggest fan of skeletonized watches on the wrist. Off the wrist, an open-worked timepiece can indeed have a wow factor. I just feel that once on the wrist, which inhibits the view, the watch’s unique character is compromised. However, what you also might know is that I felt nothing but love for the olive-green version of the Captain Cook High-Tech Ceramic Diver. 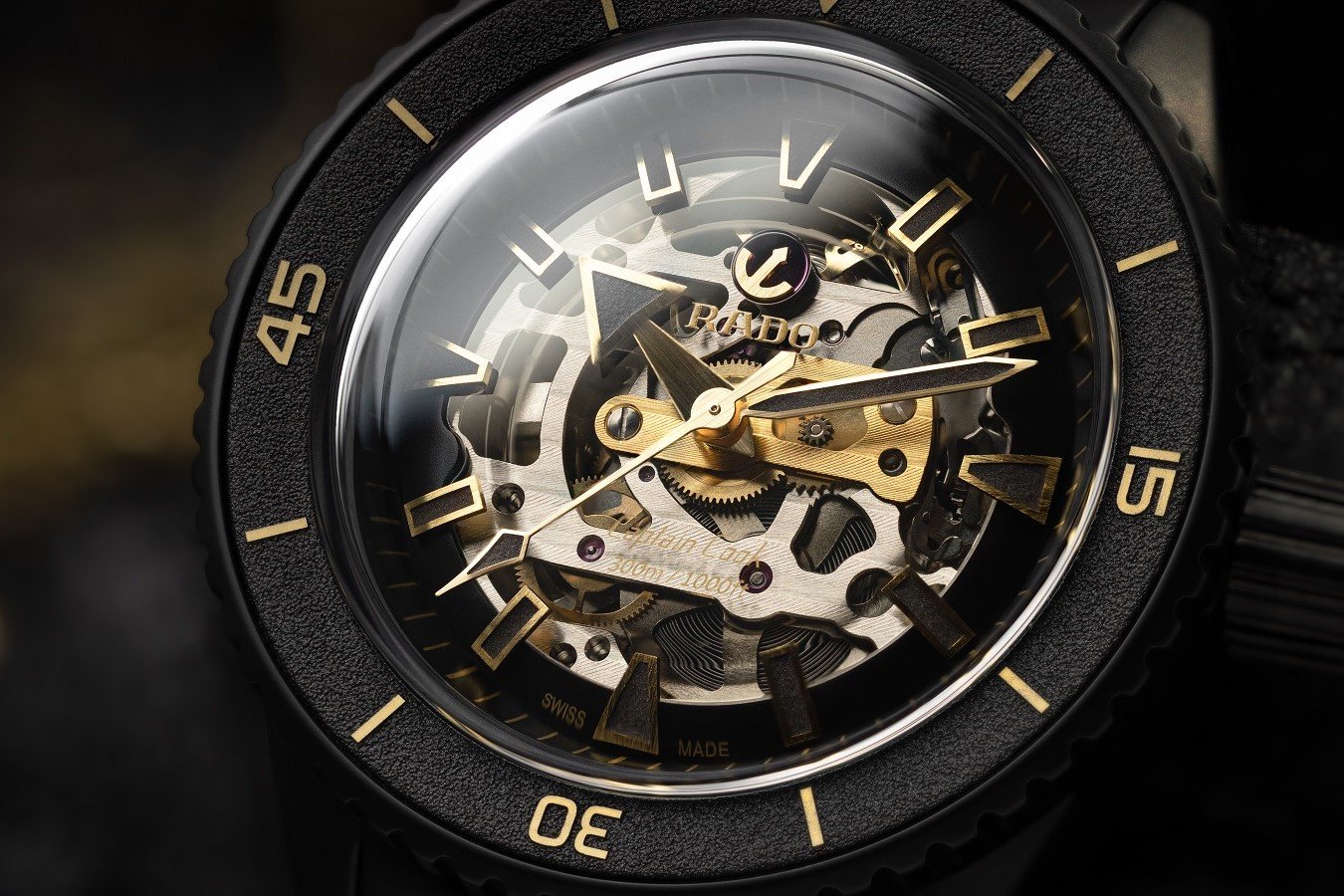 The first-ever open-worked Captain Cook comes in a limited edition of 1962 pieces (I’m sure you can figure out what that number represents; it’s not that hard). The watch combines a skeletonized movement — an artisanal technique invented by the French royal clockmaker André-Charles Caron in the mid-18th century — with a matte black, futuristic 43 × 49.8 × 14.6mm ceramic case. There’s also a luxurious touch in the ceramic bezel sporting a black laser-etched ceramic insert and yellow-gold-colored numbers and indexes. You can also see that same color through a slightly smoky sapphire dial. There, you’ll find yellow-gold-colored applied indexes with black Super-LumiNova plus hands and movement parts in that same golden hue. 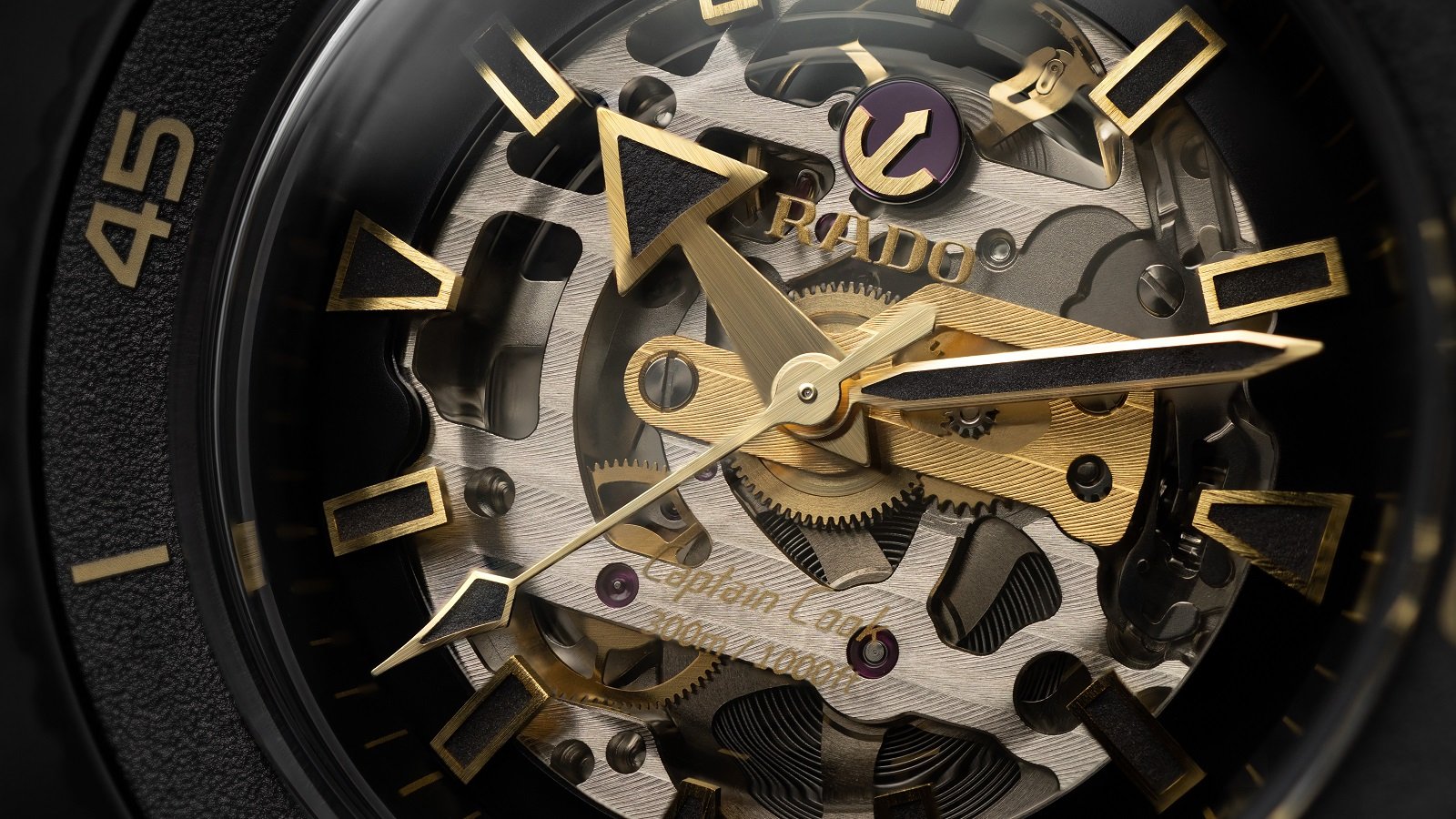 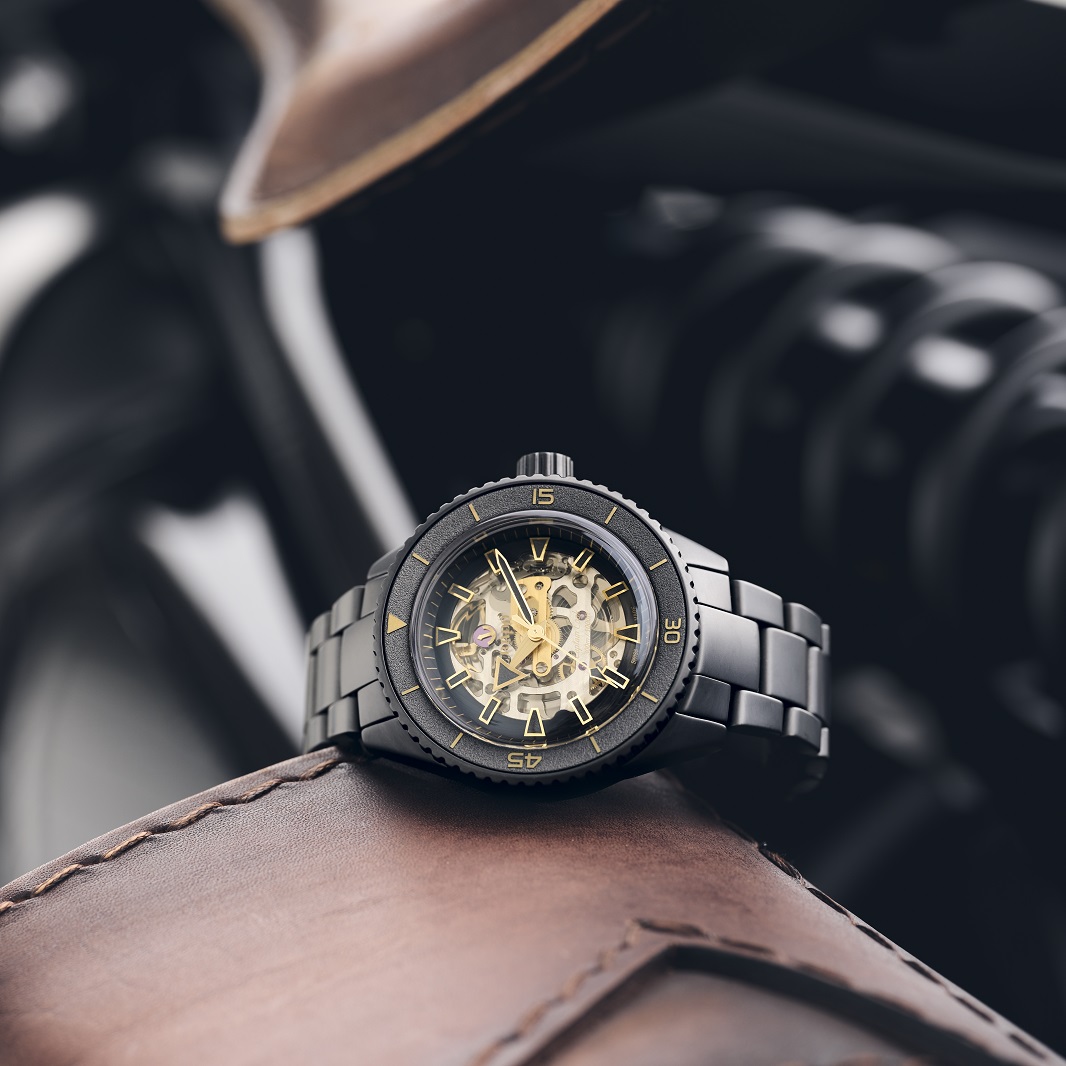 The movement inside this Captain Cook is the automatic caliber R808 with 80 hours of power reserve. There’s an anti-magnetic Nivachron hairspring inside, and you can see it at work through yet another smoky crystal in the PVD-treated titanium case back. What you will also see is an airy movement decorated with Côtes de Genève engraving, as well as a yellow-finished gear train bridge.

Have a look at Rado’s official website if you want to know more about the open-worked Captain Cook High-Tech Ceramic LE. 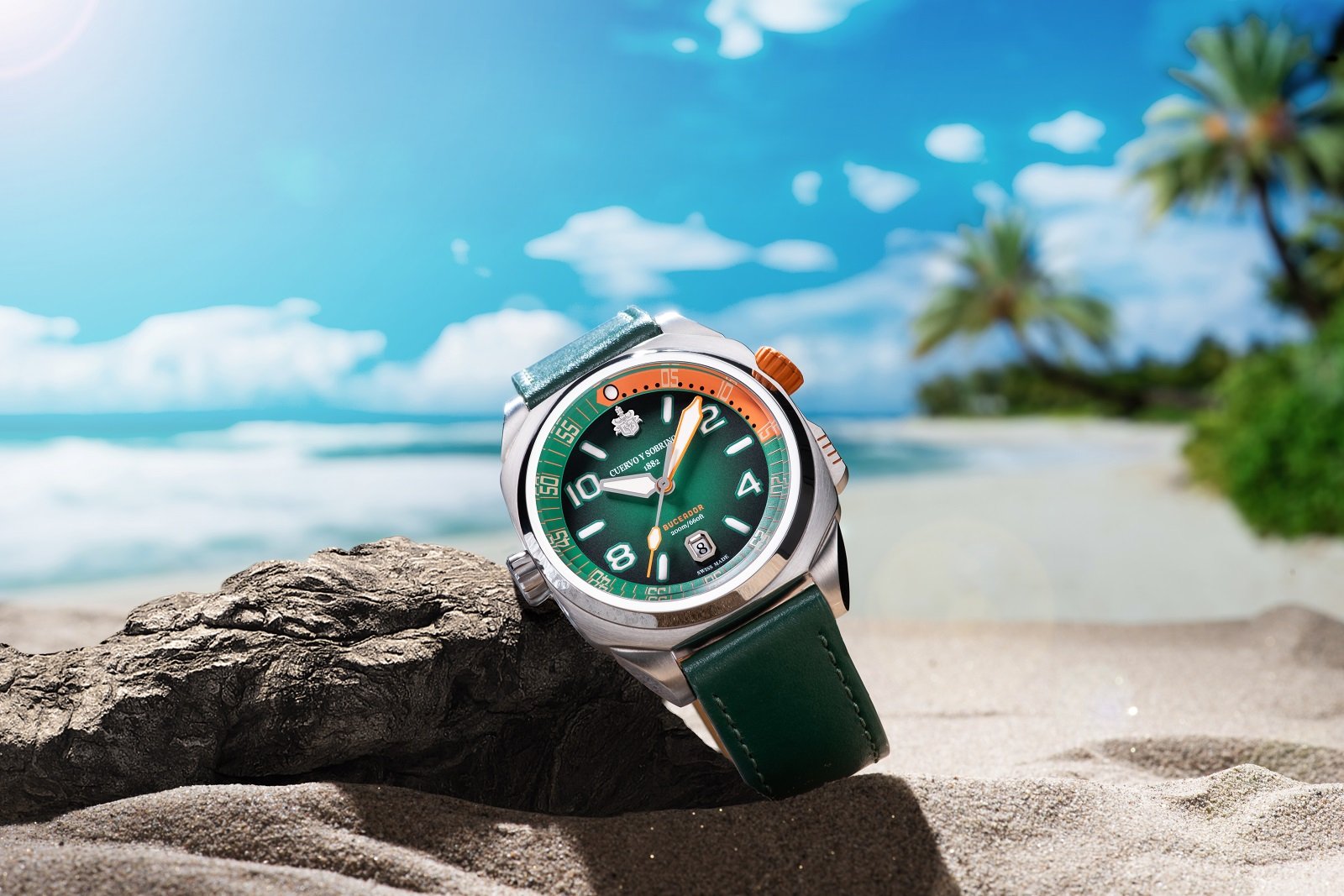 To be honest, I had no idea what/who “Pipin” was, but that’s maybe because freediving is, in my opinion, the scariest sport on this planet. Yes, we might come from the sea, but since we lost our gills eons ago, why go back there? Anyway, Pipin Ferreras is a Cuban freediver and amigo of the Cuervo y Sobrinos brand, which led to the Buceador Caribe “Pipin” Edition (CHF 3,200). Señor Ferreras helped design the dive watch, and the man must have good taste because the color combination is tropical and exotic but also resonates with (my) northern European tastes. The distinctive green dial, enlivened with black, cream, and orange accents, is inspired by the Caribbean waters encircling Cuba. 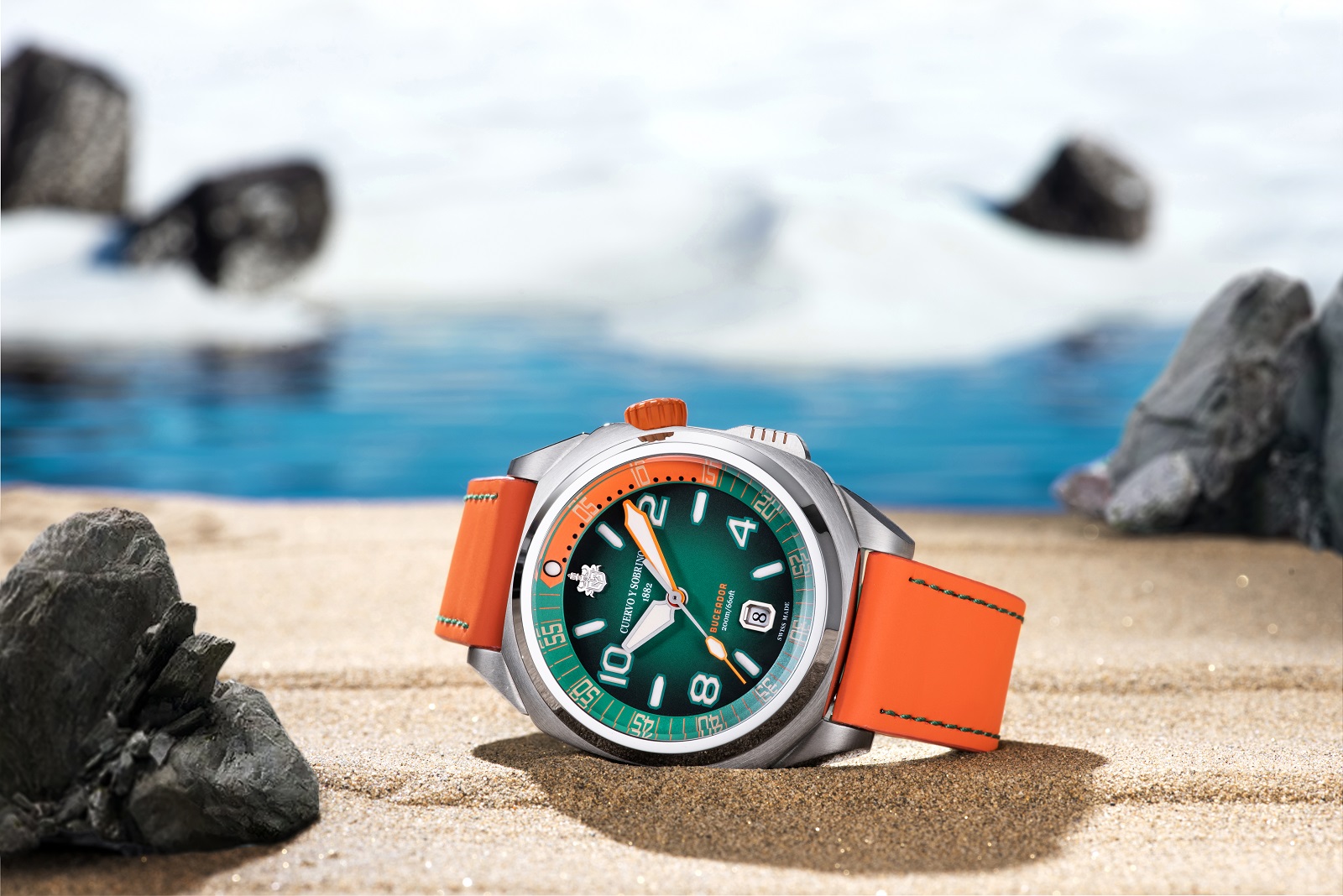 The steel 43mm Buceador — buceador is the Spanish word for “diver” —  is water-resistant to 200 meters. And underwater, not only Pipin but also everyone else who wears “his” watch will find out that the bold hour and minute hands and indices are highly legible. The same is true in the dark since both the hands and indices are treated with Super-LumiNova, enhancing low-light readability. A pusher, positioned at 4 o’clock, unlocks the bright orange crown at 2 o’clock. And with that crown, you can adjust the internal rotating bezel. Accordingly, the crown at 9 o’clock does all the regular stuff. The watch comes with two vibrant straps in orange rubber and green leather as well as a very good-looking box. 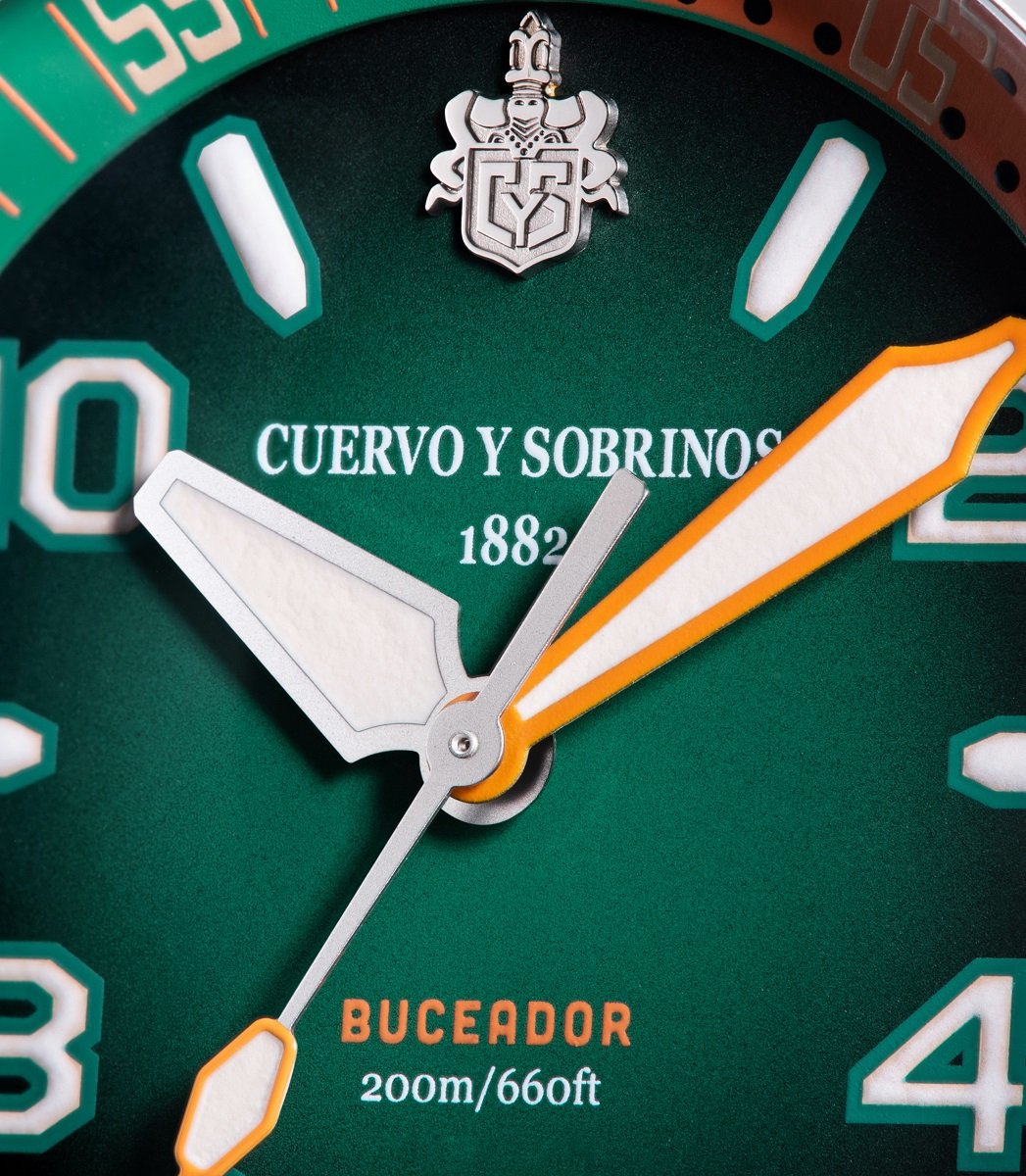 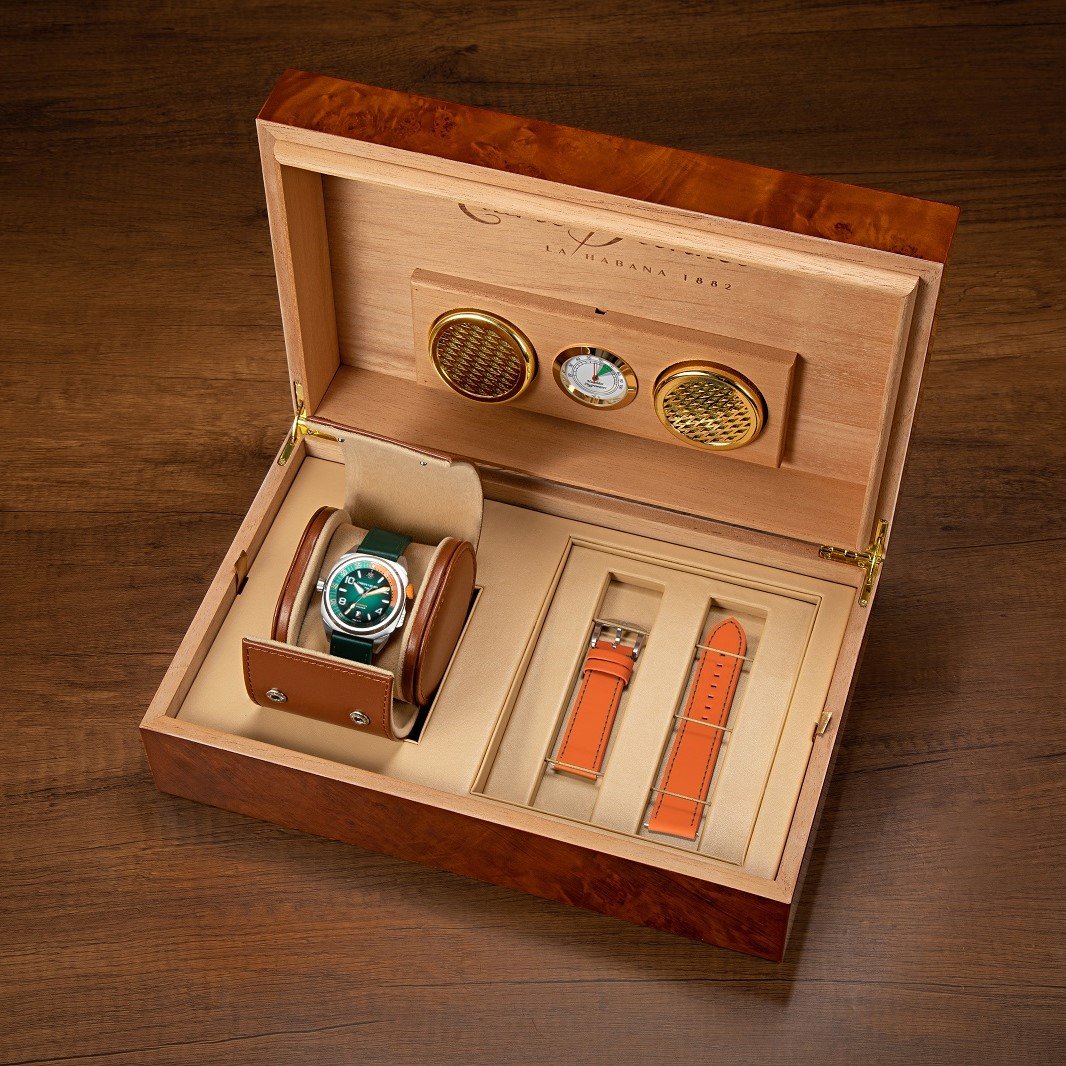 Take a look at the official Cuervo y Sobrinos website to find out if the Buceador Caribe “Pipin” Edition is your ticket to the tropics. Have a fantastic watch week, everyone!