Report: Sotheby’s Omega Speedmaster – To the Moon and Back Auction

Friend of the show Lawrence “Larry” McGlynn has a website called Space Artifacts, which is worth a visit if you’re into space-related topics.

Larry is also known for his role in the Space Dealers TV show (Discovery channel) where he hunts down valuable items that were used in space (and on the Moon). He also loves the Speedmaster, and he has helped us on a few occasions to sort out topics and enabled us to have a little interview with Apollo astronaut Dave Scott (click here). For this week’s instalment of Speedy Tuesday, he contributes a report on this visit to the Sotheby’s auction “Omega Speedmaster: To the Moon and Back | Celebrating 50 years since Apollo 11”. It was hosted on July 19 in New York, and the total result was 1.2 million USD.

To the Moon and Back Auction

The week of July 15th was Space week in New York City. As various events, auctions, and exhibitions designed to coincide with the 50th anniversary of the Apollo 11 Moon Landing were happening throughout the city. Omega’s history with human spaceflight was well represented both in museum exhibits and a watch auction at Sotheby’s.  Omega sponsored an excellent retrospective of lunar photography through the ages at the Metropolitan Museum of Art titled “Apollo’s Muse: The Moon in the Age of Photography.” You could not miss the large gold moonwalker located in the museum gift shop (I need to get one of those statues for my study). 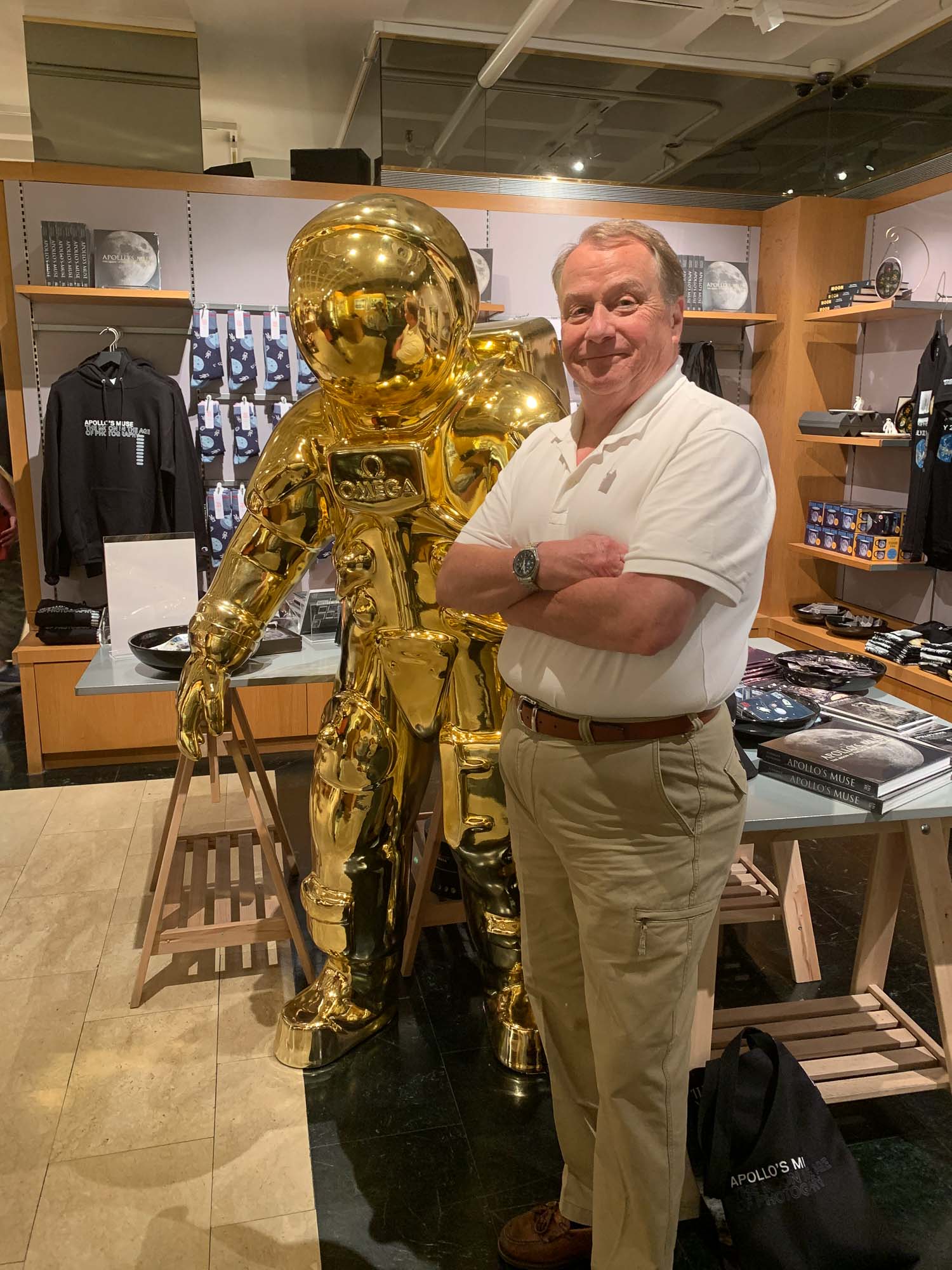 The Omega brand also was on display during the Wednesday evening receptions at Sotheby’s for both the annual Space auction and the Speedmaster auction. While Space and watch collectors attended both exhibitions, it was the watch enthusiasts that got a glimpse of the forty-nine Speedmaster watches and collectibles produced by Omega since 1957. From a watch enthusiast’s perspective, the evening’s event was well attended. The place was packed. The food and wine were flowing. With one thing in common, a diverse group of people from various corners of the world met and discussed, looked at the watches on display as well as show off their Speedmasters. 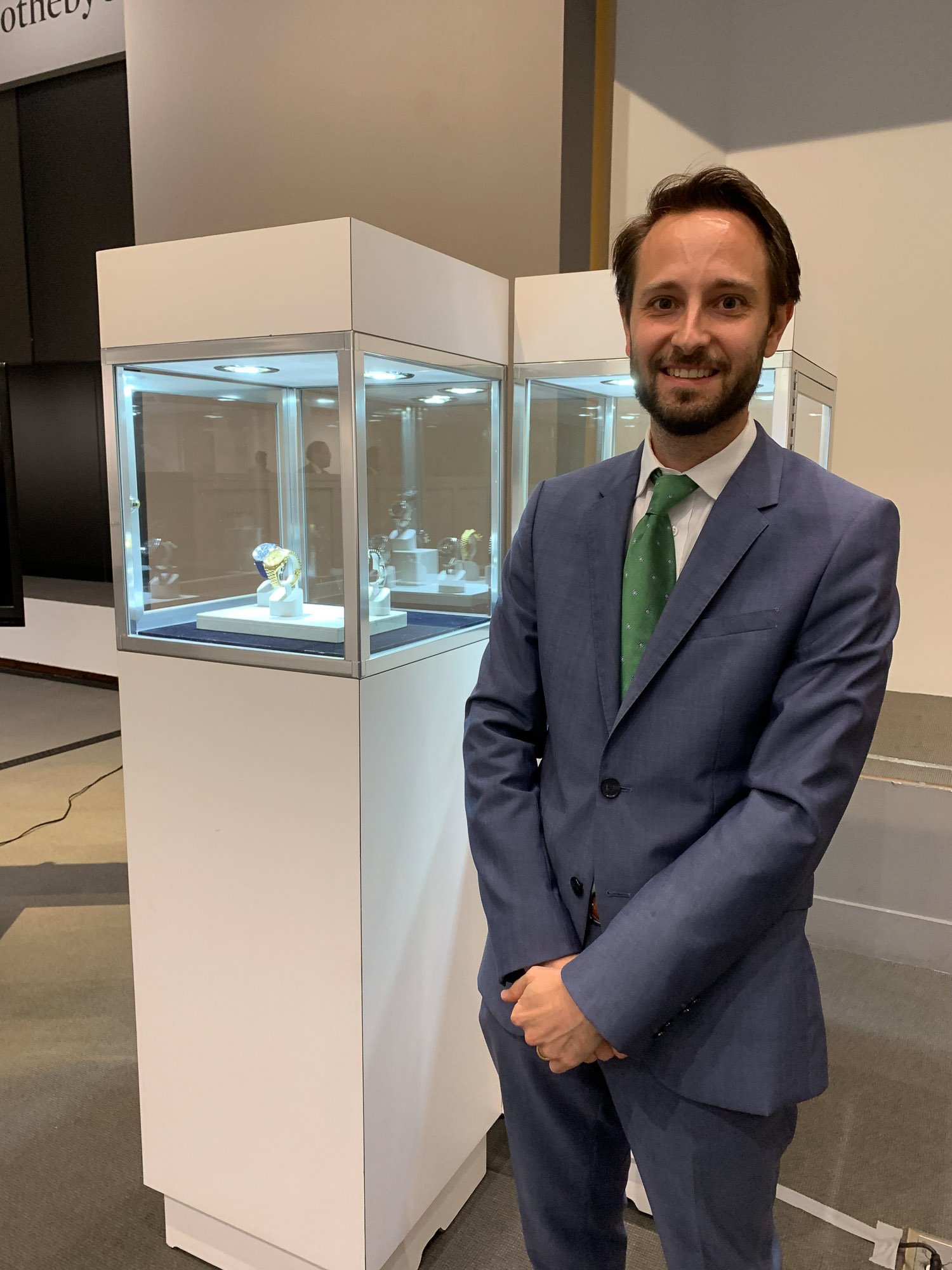 Nate Borgelt, Sotheby’s vice president and head of the auction, hosted the evening. I met Nate over one of the display counters while showing my gold 145.022.69 Speedmaster to another collector. Nate proved himself to a gracious host by leading me around the various displays including the Alaska III Speedmaster with the radial dial (one of my personal favorite watches). 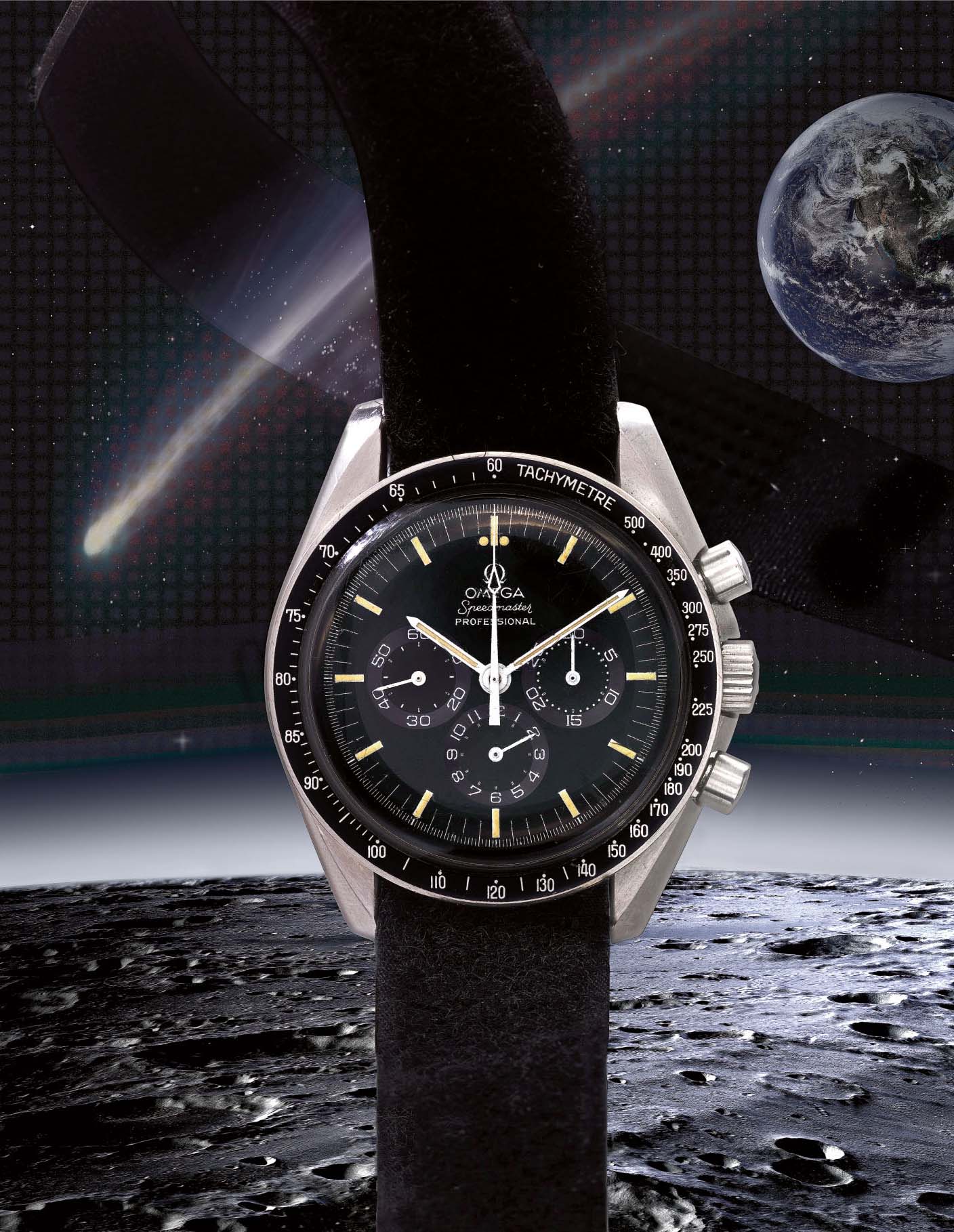 On Friday, the “Omega Speedmaster: To the Moon and Back” watch auction started at 2 PM (1400hrs) in the upper auction gallery. I attended for two reasons. One is that it was a watch auction at a prestigious auction house as well as Sotheby’s first major Speedmaster watch auction. The second reason being that New York City was baking under a heatwave with temperatures hitting 100 degrees Fahrenheit on the street. Luckily, Sotheby’s climate control gallery kept us all as cool as a cucumber. 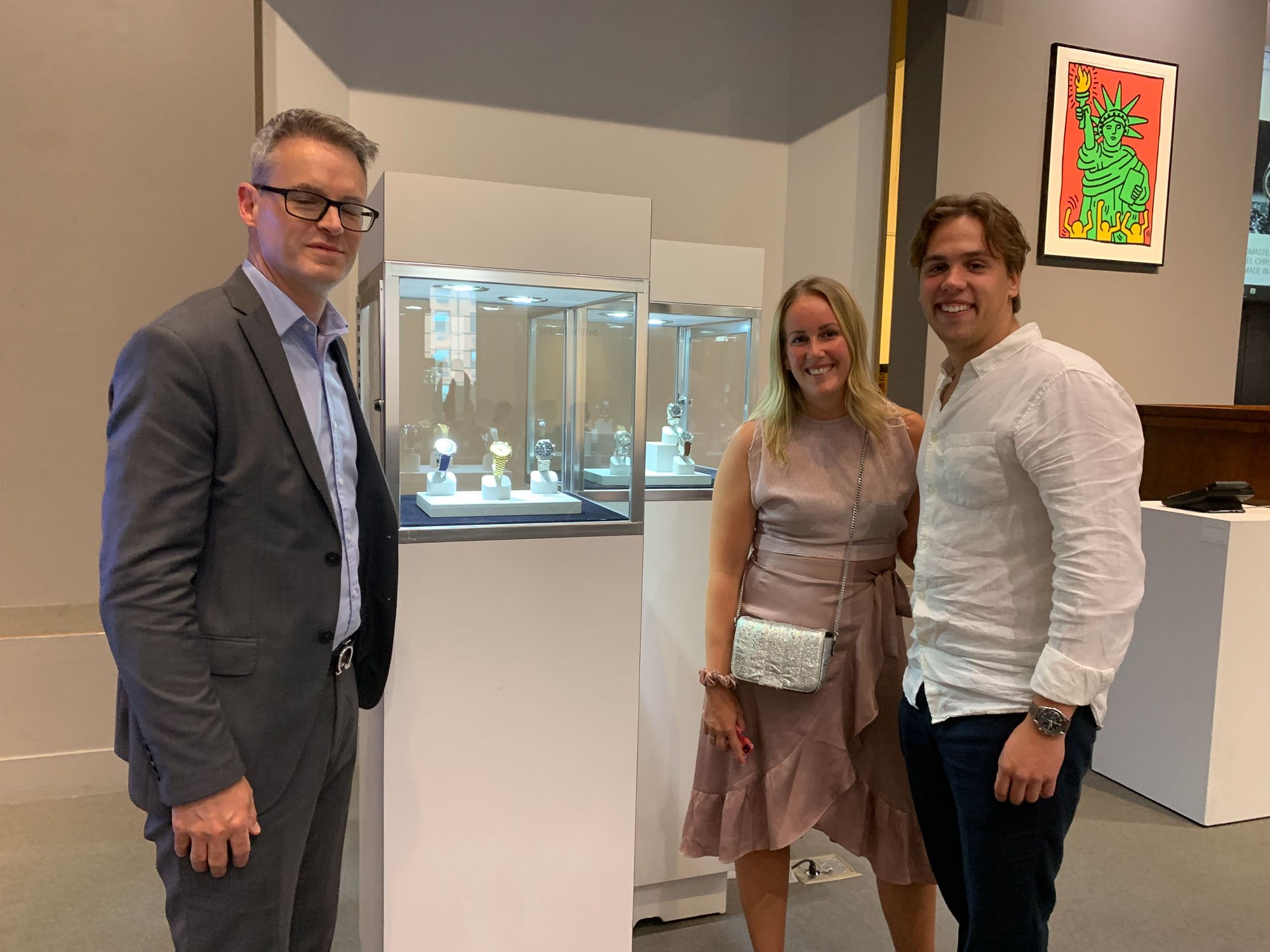 After a slight delay to fix the IT system, which seems to be the perfect reason to continue to produce and buy mechanical watches, the auction got underway. As a veteran auction attendee, I am used to it, but for most people, the expectation of a packed house of bidders is no longer the norm. While telephone bidding has been around for ages, the Internet has drained the gallery halls of in-person bidders. The status of this auction brought people to New York City from as far away as Sweden to as close as the state next door. In the end, nothing is better than being on the floor in an auction. You can sense the ebb and flow of the bidder energy as well as catch the nuance of the bidding process. 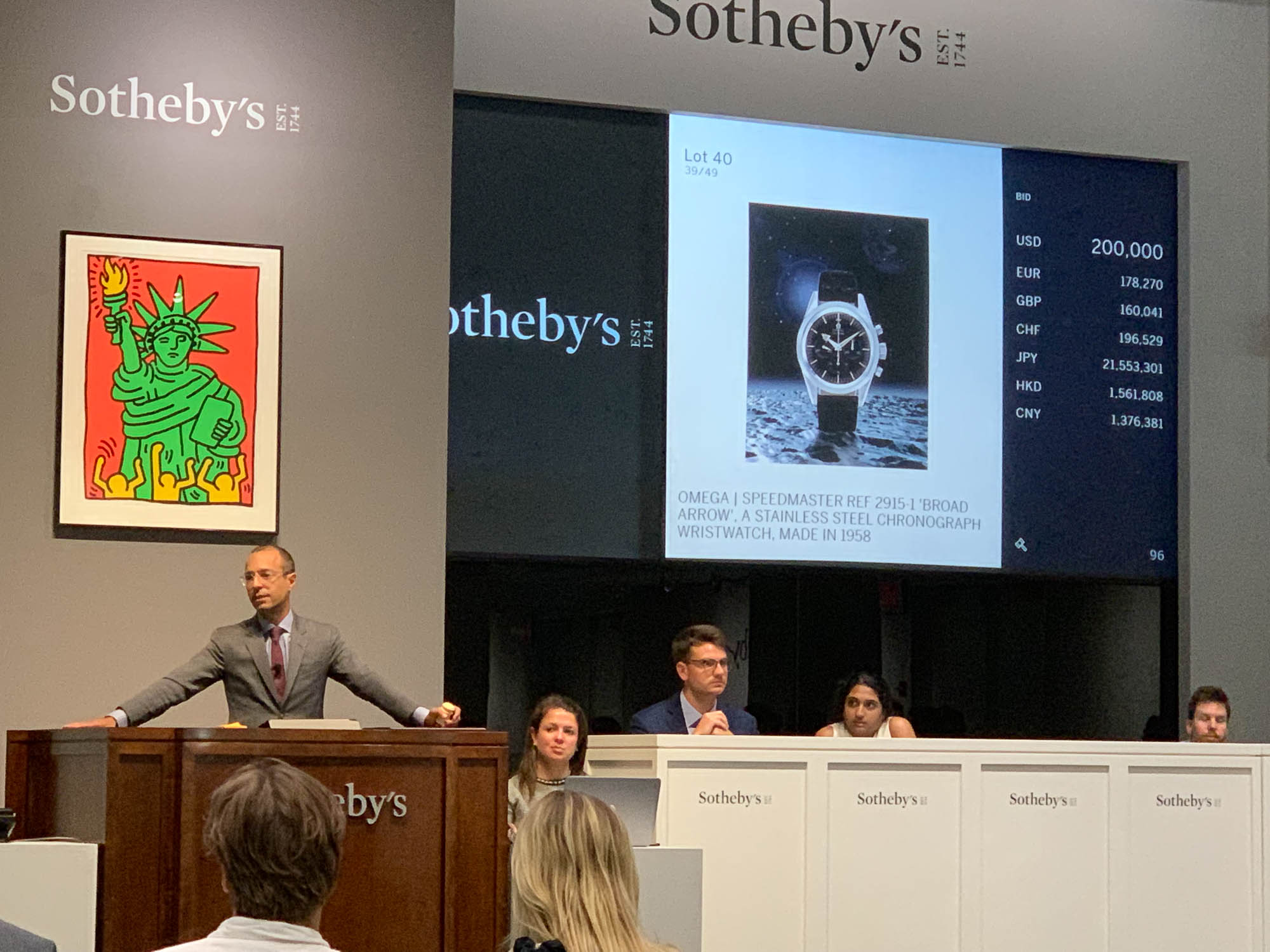 As I stated before, the auction captured a wide array of rare examples of Speedmasters. The lots included 2915-1, 2915-2 and 2915-3, 2998-1, Transitional, Pre-Moon, Alaska III and gold 1969 Omega Apollo XI Speedmaster as well as some promotional materials like displays and ashtrays. The Speedmaster was well represented at this auction. An explanation to explain the bidding process and pricing of each watch would require another ten pages. As such, I will provide a couple of interesting examples of the bidding on some lots and refer you to Sotheby’s website link at; Omega Speedmaster: To the Moon and Back for individual pieces and their prices. 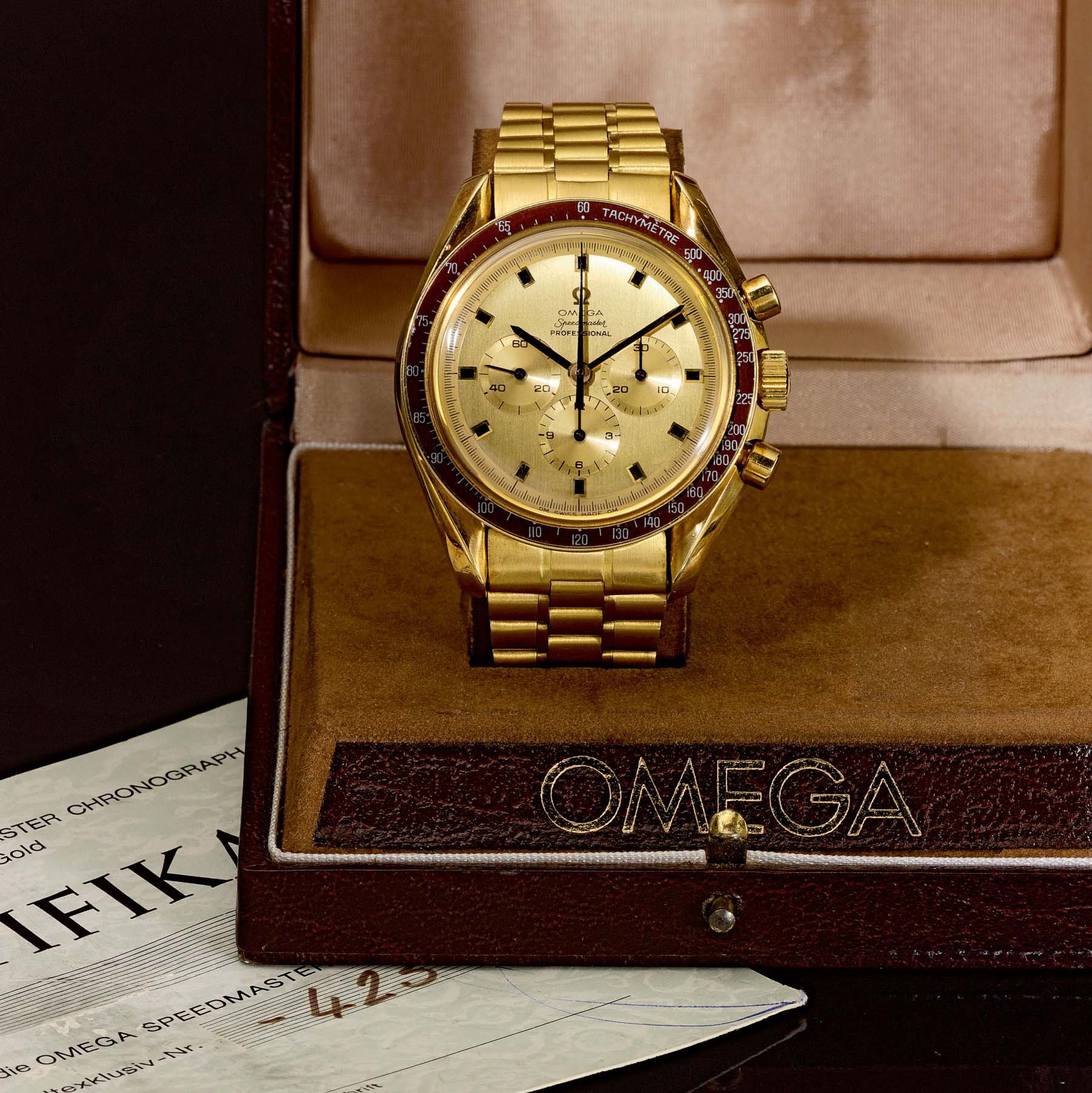 Being on the auction floor can also provide one with an intimate view of the bidding process and how some of the more experienced bidders operate. The bidding on the Alaska III Speedmaster was a great example on how to intimidate other bidders and bully one’s way to a winning bid. 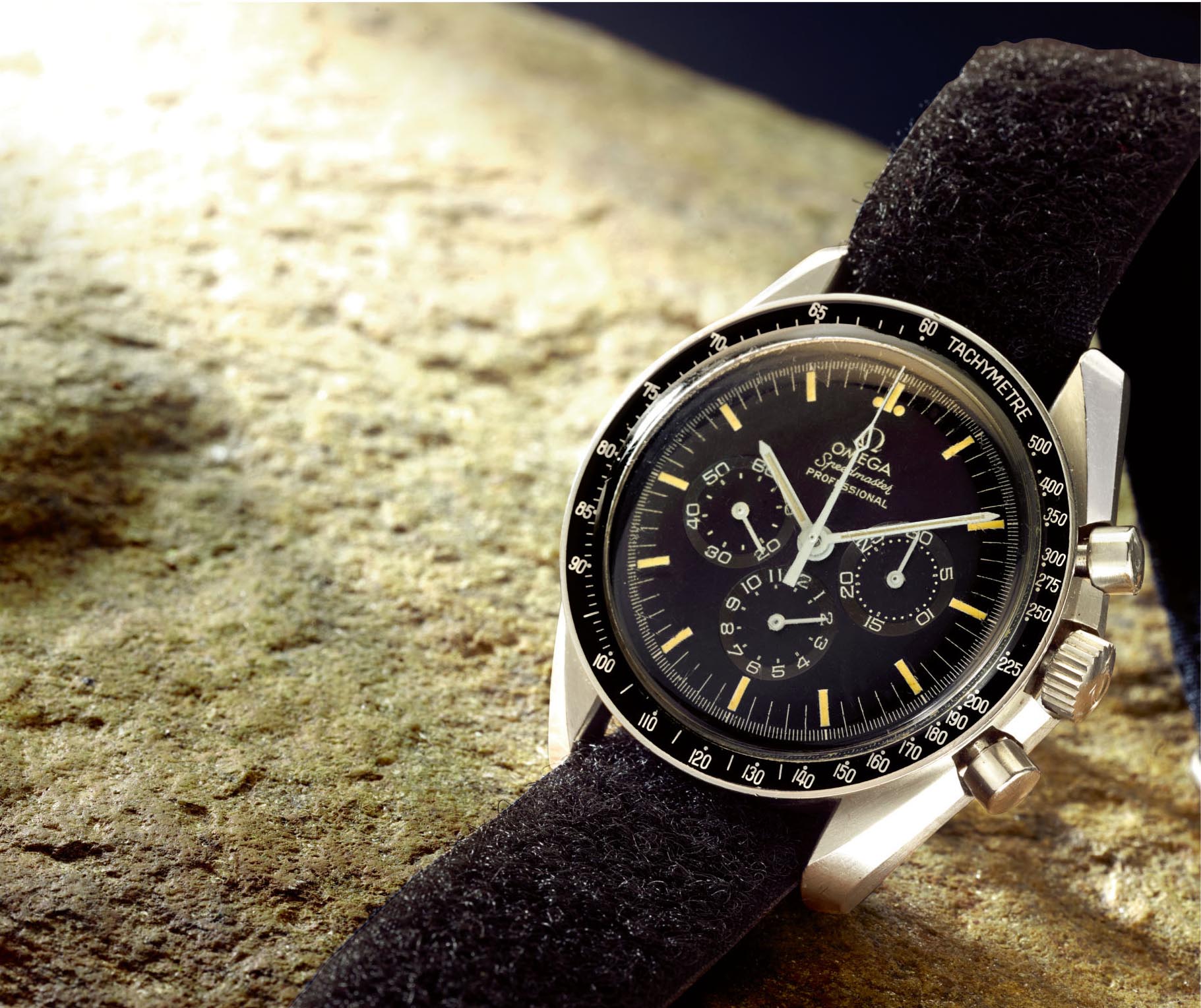 When the lot came up on the board, the starting bid from the house was $70,000. Then the proxies for two telephone bidders on either side of the room started bidding against each other. One would bid, then the other would slowly counter. The number rose in $10,000 increments to $80,000, then $90,000, to $100,000. It was like watching a tennis match as my head moved back and forth as the bidding progressed. The bidding hit $110,000. Then one of the proxies raised his hand to bid and told the auctioneer that his bidder requested to raise his next bid to $150,000 and jumped the next bid by $40,000! A very unsubtle way of saying, “you are not going to beat me for this watch.” Boom, Ace! The other bidder quietly conceded the contest. Game over. The expressions on the auctioneers’ and the opposing bidder’s proxy faces were priceless. It was one of those moments that makes sitting on the floor worthwhile. While the auction room may be close to empty now, the drama remains. You don’t get that sitting your bedroom watching the screen.

After the auction was over, I walked over and asked Nate Borgelt about his first impressions concerning the sale. His first comment was that the watch’s condition mattered. He was referring to the two 2915-1 Broad Arrows that were passed over by bidders at the auction. The second Broad Arrow’s bezel had worn entirely off, but the consignor placed such high reserve on the watch that the bidders were not willing to start the bidding. 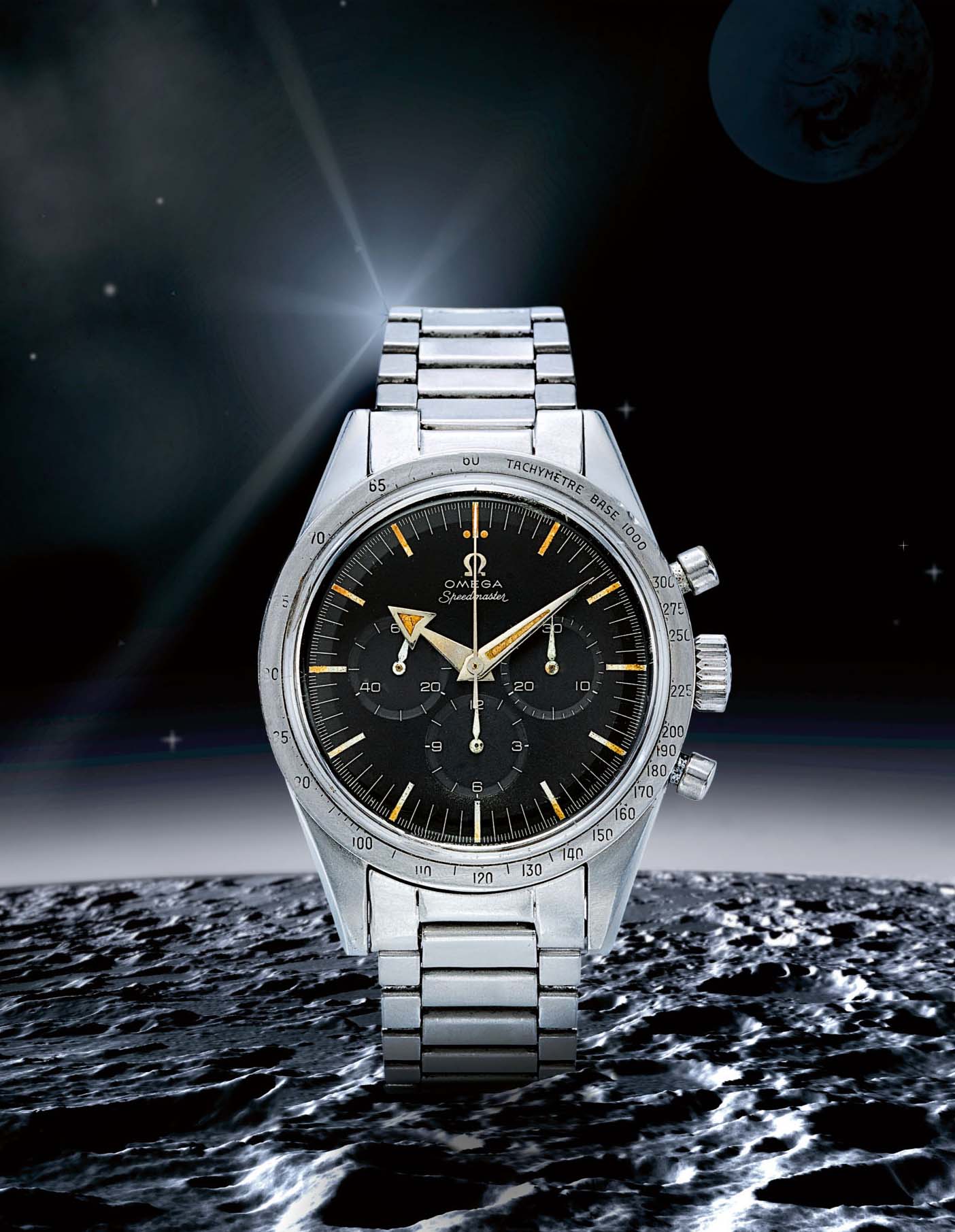 Nate also felt that they gauged the estimated prices ranges well since almost all of the watches sold within the expected ranges. He also thinks that there is room for more collectors to enter the Speedmaster market. He said that he feels the Speedmaster vintage watch market is untapped. Based on prices realized at this auction, I would have to agree with his comment.

Overall, there are a couple of observations that I can away with about this auction. The auction was successful in terms of the winning bids versus the auction’s estimated values. Also, based on the prices realized of $1,205,375 (an average of $27,000 per lot based on 44 watches that were sold) on a Speedmaster auction of 49 lots, the market is growing for vintage Speedmasters which translates to the days of picking up a nice Pre-Moon or Tropical for a reasonable price are coming to an end. 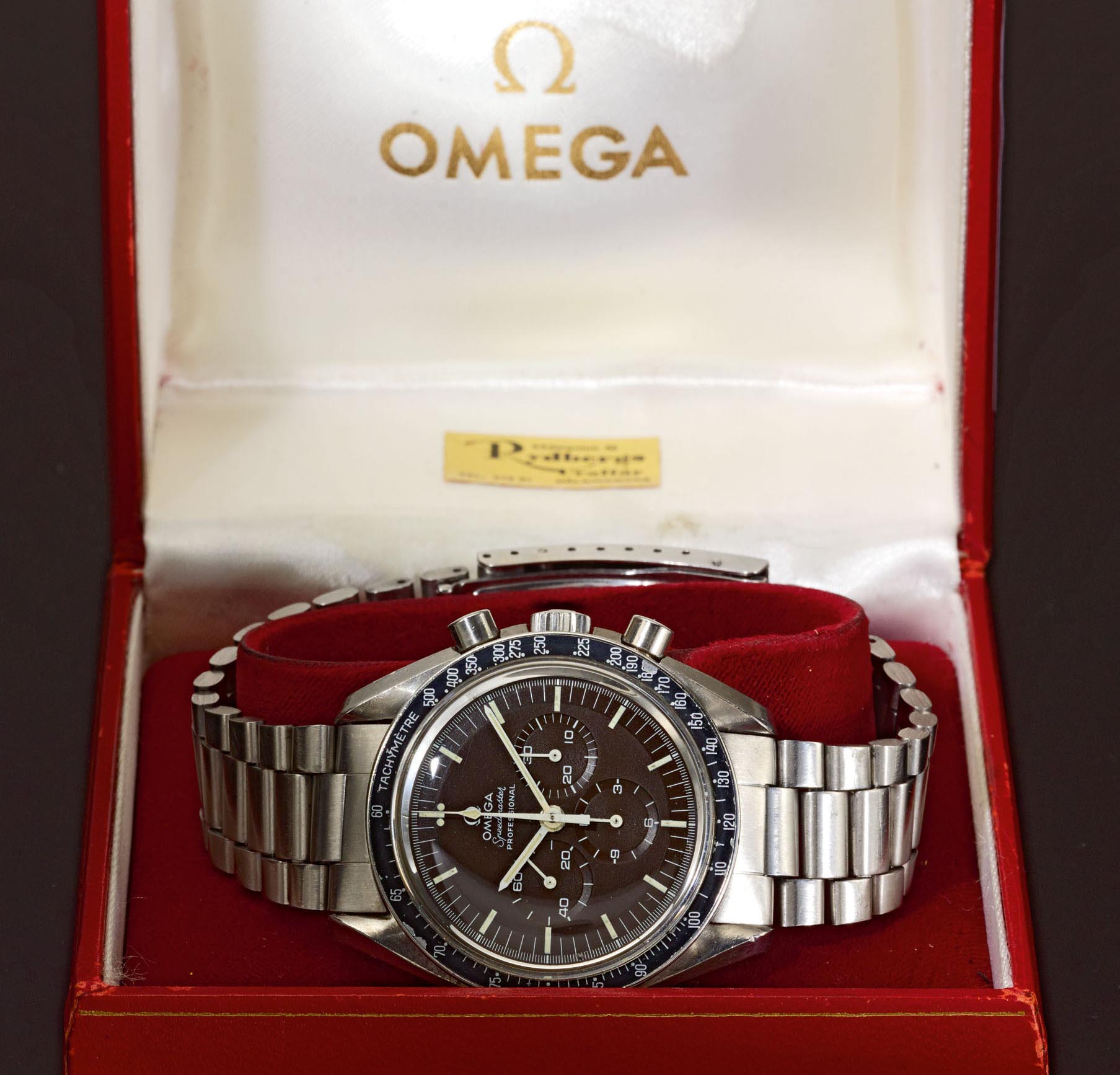 All auction results of Sotheby’s “Omega Speedmaster: To the Moon and Back | Celebrating 50 years since Apollo 11” can be found here. A big THANK YOU to Larry McGlynn for contributing his auction report for this week’s Speedy Tuesday. Make sure to visit his website Space Artifacts.