Another hit from Hölstein, this time in collaboration with one of Switzerland's major jewelers
Gerard Nijenbrinks
comments ...
Share

Oris, for me, is definitely on the right track. They were one of our Baselworld 2019 favorites, and we’ve seen many attractive products coming from Hölstein lately. The novelties we saw in most of their model lines, like the Aquis, Big Crown, and Sixty-Five were all spot-on.

Only last week, on May 6th, 2019, a very attractive two-tone Sixty-Five Divers Chronograph in steel and bronze was introduced. This was the follow up to the full-bronze Carl Brashear variation presented last year. We covered those in our articles Oris Divers Sixty-Five Chronograph and Brashear Chronograph Limited Edition. What we didn’t cover yet is a special Bucherer Blue Editions Chronograph which was introduced in between. We’ll make up for that now. 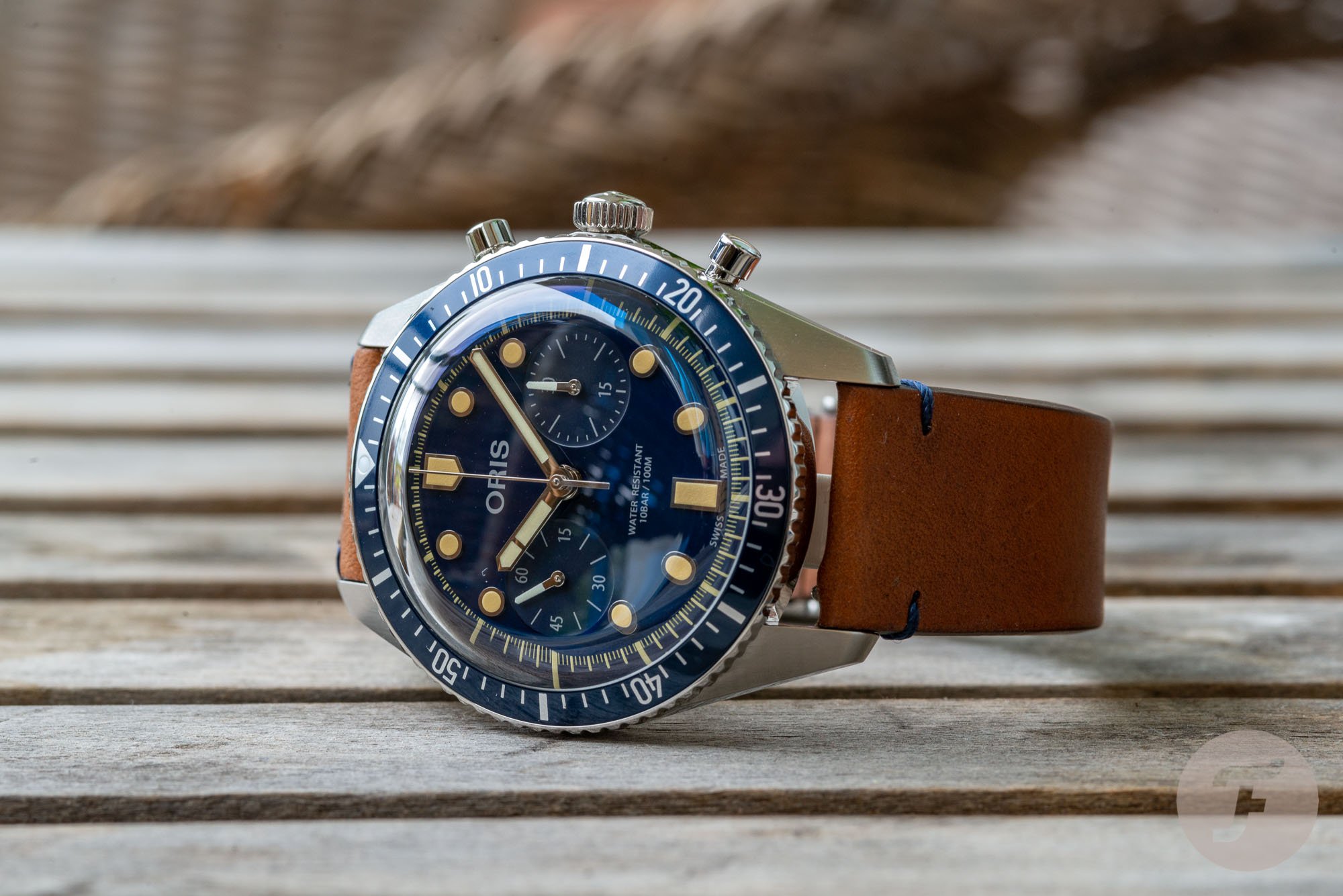 Obviously, the central theme of this collection is the color blue. For many, blue has been a source of inspiration, reminding of the sky and the sea. It had also been a symbol of Bucherer since their beginning in 1888, and hence Bucherer found it an identifying feature of their brand.

…available in Bucherer boutiques and online 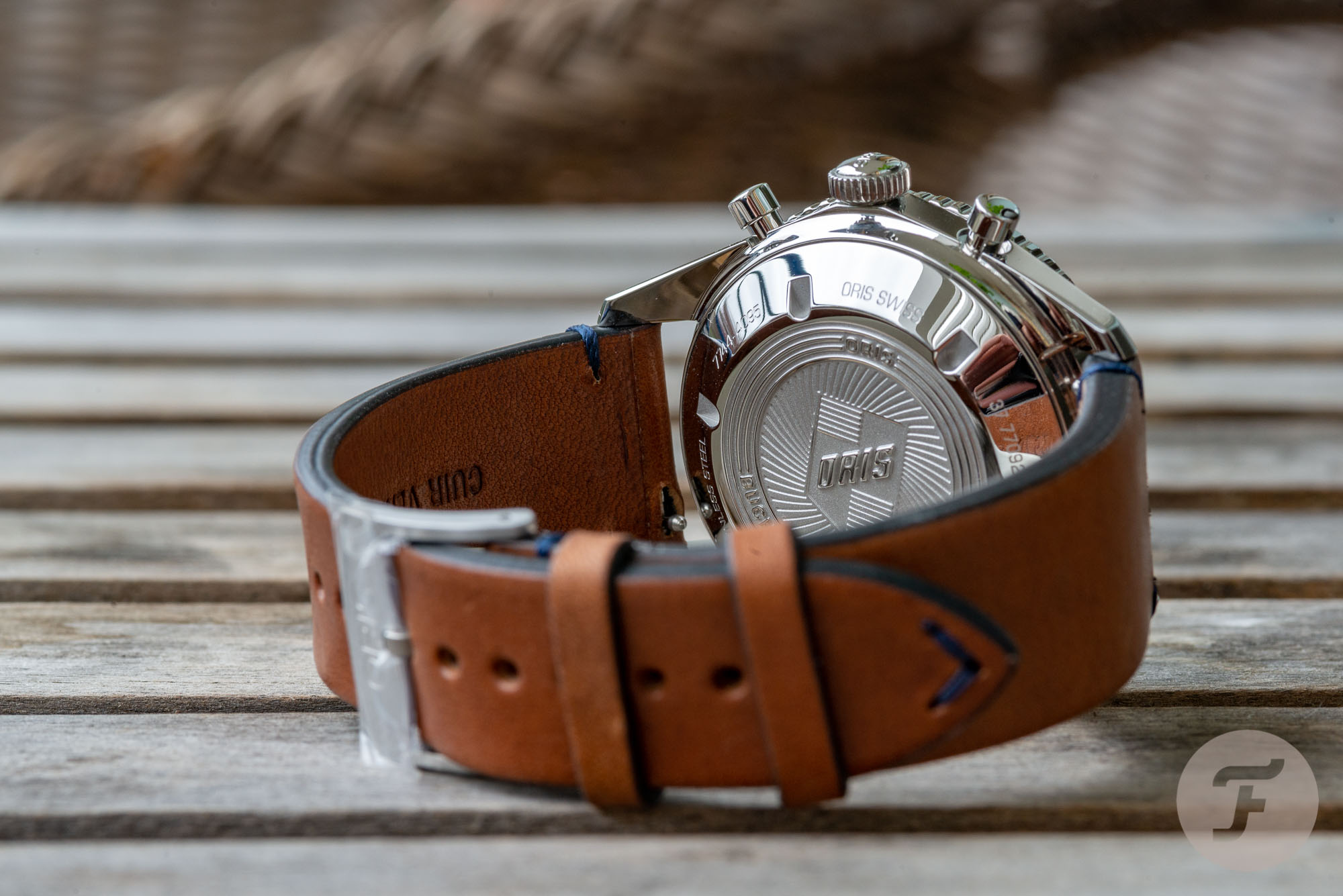 Although a fan of two-tone watches, I must admit that the complete stainless steel casing of the Bucherer edition suits the blue of the dial and bezel extremely well. I can imagine that for the same watch with a black dial and bezel – like introduced last week – I would have preferred the steel and bronze two-tone casing. For this Blue Editions version certainly not.

Oris uses Super-LumiNova in the Oris Divers Sixty-Five Bucherer Blue Editions Chronograph as light emitting material in the dial. As with the other two chronograph models, the Brashear and the steel/bronze, the color is slightly off-white, which perfectly suits the blue dial and the rest of the watch. The size of the index dots, as well as the adapted width of the hands, is more than large enough to make the watch easy readable. During the day and during night time. 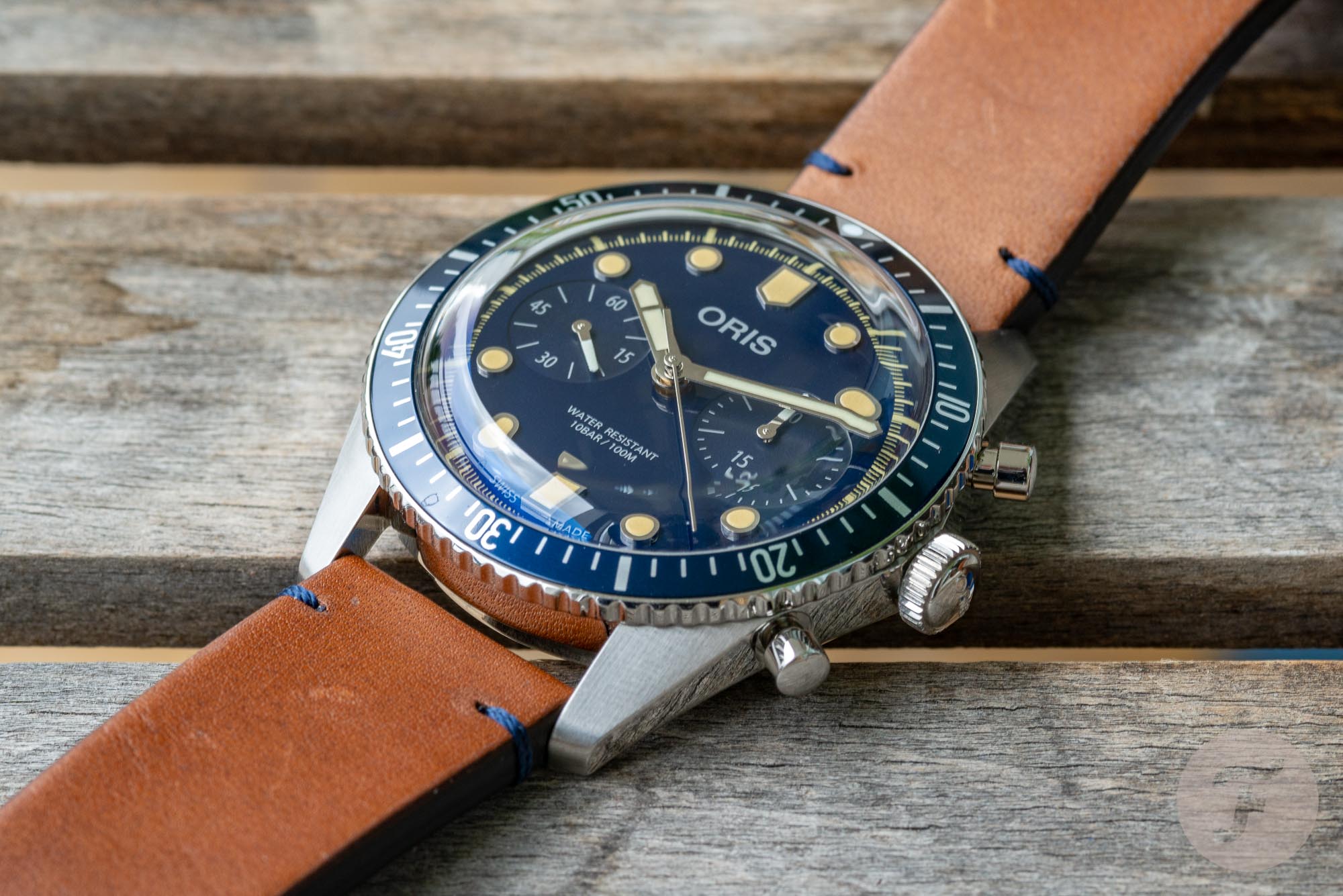 I love clean dials. And although a chronograph will always have more to show than a time-only watch, this Oris bi-compax chronograph is extremely clean. Except for the brand name above the dial center, and the water resistance indication below it, there’s nothing which ruins the cleanliness of the dial. And most remarkable, not even a date window. I absolutely love watches without a date window. I’m sure for a manufacturer it needs some guts to leave it out, but it’s very rewarding in my opinion.

The all stainless steel casing

…not subtle but still elegant 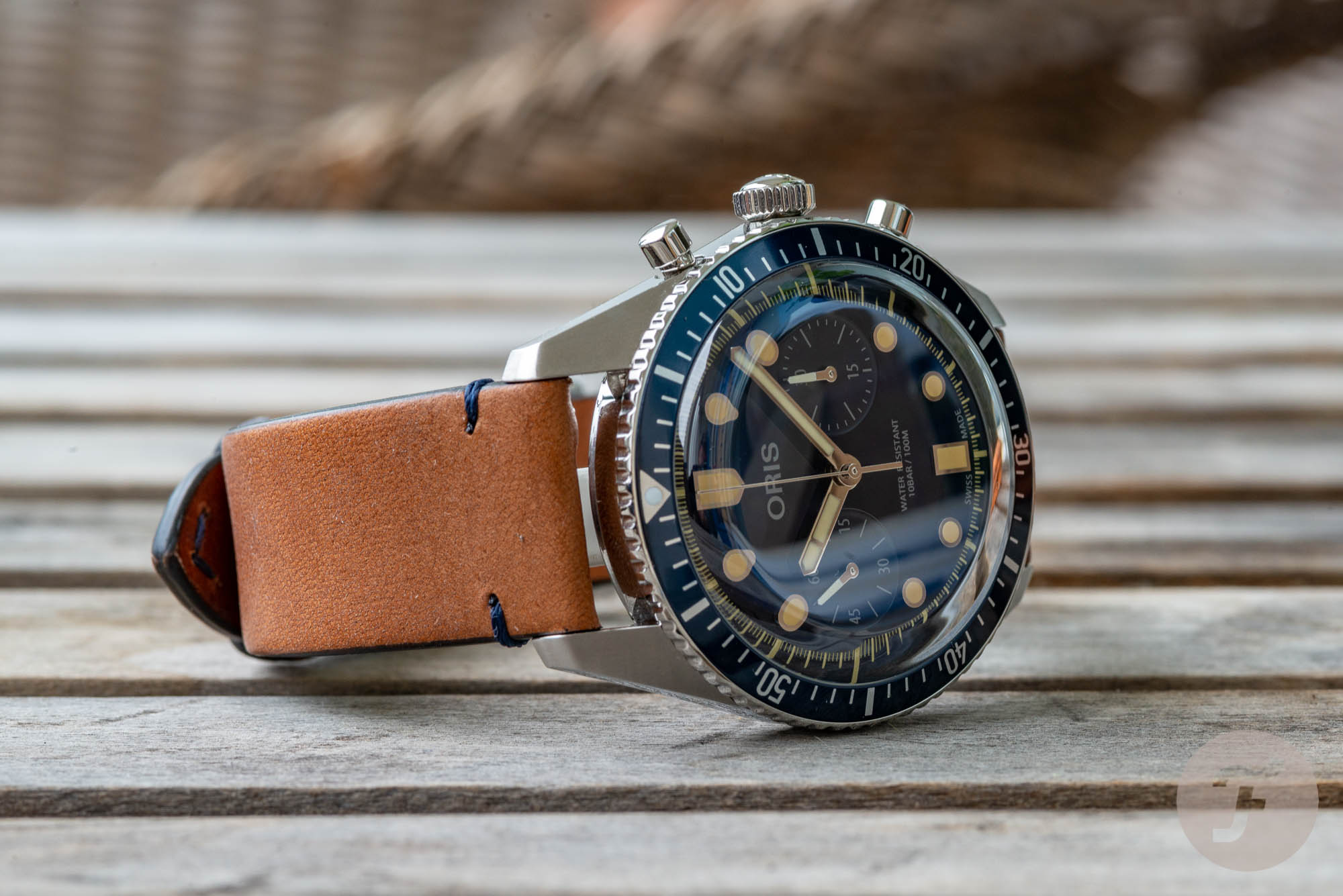 With its 43 mm stainless steel casing the Oris Divers Sixty-Five Chronograph Bucherer Blue Editions in no way is a subtle watch. However, despite its size, its shape, finish, and distinct blue color, in a way, makes it an elegant watch. For my taste, the pump pushers could have been slightly larger in diameter, a bit bolder. I think it would do the watch well, certainly compared to the 43 mm diameter of the casing. 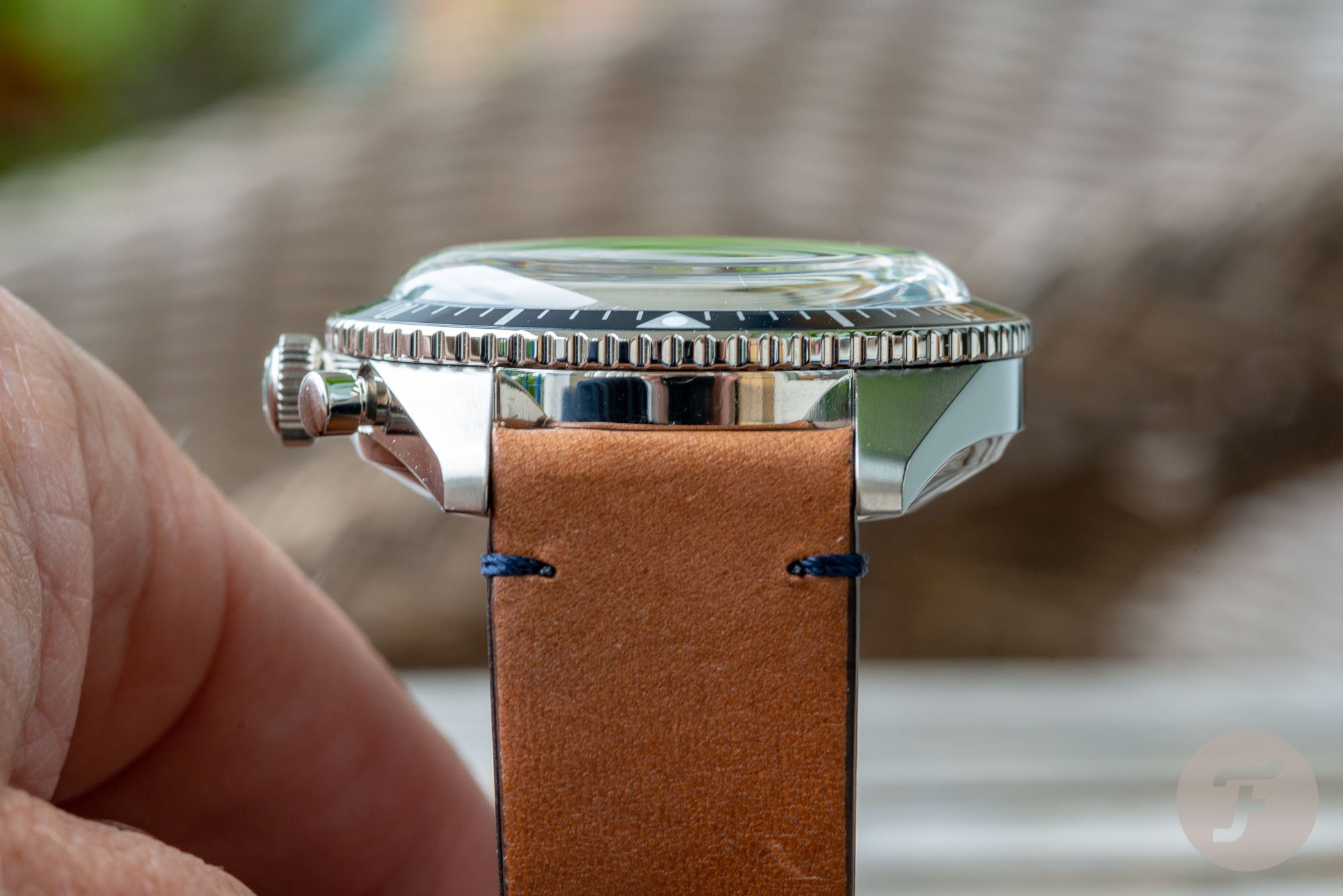 All Oris Sixty-Five Divers models, so the chronographs as well, have a depth rating of 100 meters or 10 bar. For a divers watch, this is adequate. Even according to the ISO 6425 for diver’s watches, it’s sufficient and in accordance with the standard. In general, however, a typical diver’s watch will have a rating of 200 meters, and from 300 meters onwards we’re talking professional business.

The highly domed sapphire crystal is very prominent and important to the shape and image of the watch. It’s a modern solution but adding to a vintage feeling. Of course, the brown leather strap with small blue details adds to that as well. The straps are of good (thick) quality and come with an Oris engraved buckle. The lug size is 21mm, which might make it slightly more difficult to change to a third part strap if you would prefer so. 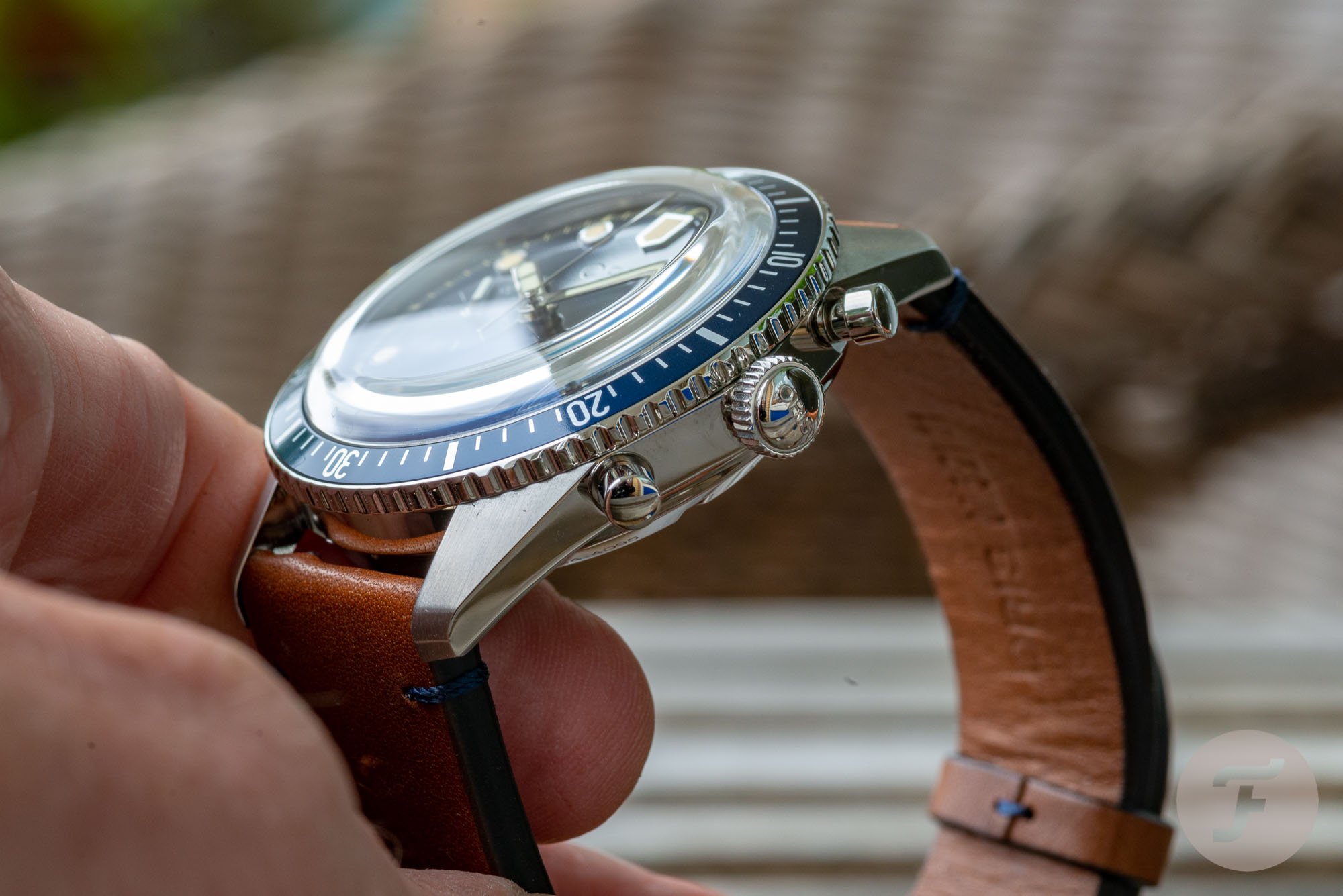 Like the other Sixty-Five Diver’s Chronographs, the Bucherer Blue Editions use the Oris caliber 771. This caliber is based on the Sellita SW510, which on its turn is derived from the SW500, an ETA/Valjoux 7750 clone. Probably not the most exclusive from the pack, but a highly trustworthy caliber, and perfectly able to make the Oris Sixty-Five Chronograph a very reliable watch. Kudo’s to Oris for not using a glass case back for this watch, the nicely embossed solid case back suits this watch way better than a view on the quite common SW510 movement. 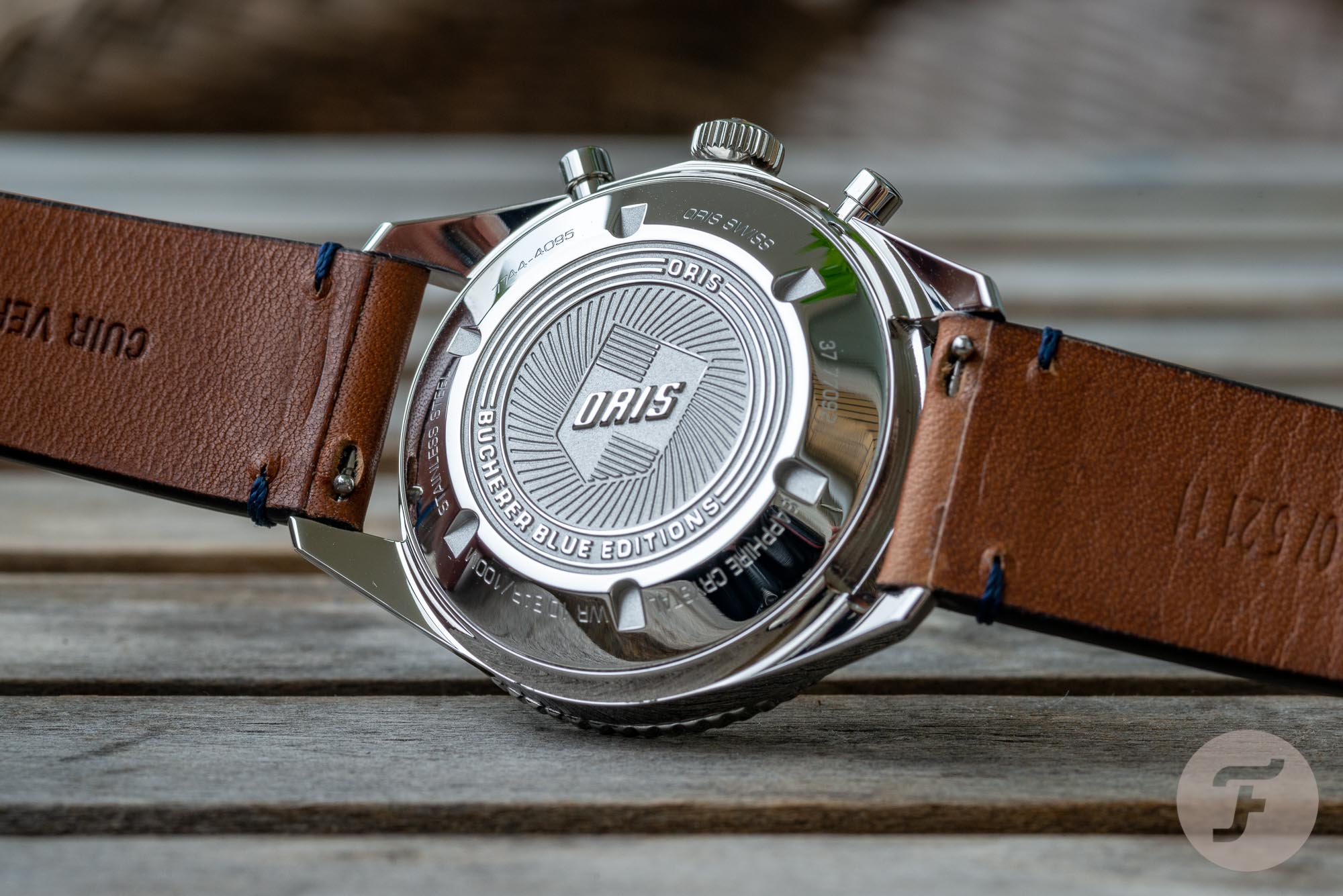 Many of the Bucherer Blue Editions, like the ones we covered before, are made in limited quantities. Only a certain number of these watches will be made, to enhance their exclusivity. Exclusivity beyond the fact that these watches are exclusively available in Bucherer own boutiques. We didn’t find any information that the Oris Divers Sixty-Five Bucherer Blue Editions Chronograph will be limited in production numbers though. If would be in the market for a sporty yet elegant chronograph at the below-€ 4k price level, I wouldn’t mind traveling to a Bucherer Boutique to acquire one. In fact, it would enhance the fun. 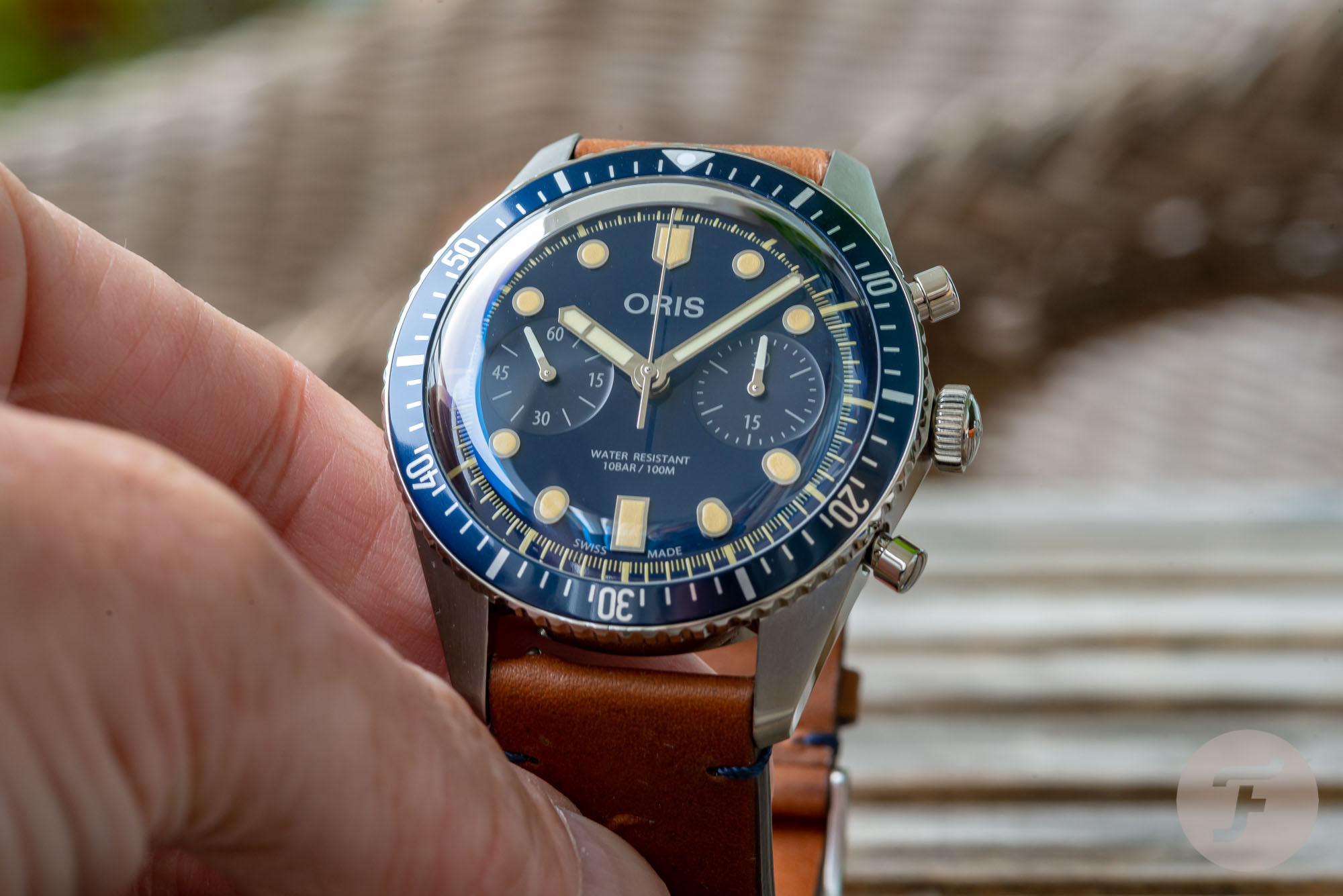 Oris did it again, with this watch they hit the right spot. And this time even in cooperation with one of Switzerland’s largest jewelers, Bucherer. For technical specifications and price information, please scroll down through the picture gallery to the specification sheet. More information on Bucherer and the Blue Editions project can be found at their website www.bucherer.com.