You know by now that Schofield founder Giles Ellis and I are friends. I’m a long-time follower of the brand and (quite recently) became a Schofield owner. But our relationship extends beyond that of consumer and vendor. That isn’t always the way that professional relationships evolve, but when you work in a small, passion-driven industry, it isn’t so hard to imagine why two guys who see value in the same things would get along. And so, it was in that capacity as his friend that I told him exactly what I thought of his latest creation, the SWC SWC, or, should I say, the Schofield Watch Company Small Wall Clock. I told him, in no uncertain terms, that he had finally lost the plot. Here’s why…

When it comes to design, there are very few people that rank as highly in my estimation as Giles Ellis. He’ll probably turn the same shade of blush pink as the carpet that lines the Upper Beeding-based Riverside Store where fans of well-made and well-considered items can inspect Schofield’s wares first hand. But he’s a bloomin’ genius when it comes to pulling something from his brain and bringing it to life in a visual way for the rest of us to enjoy. His case backs are probably the easiest, least academic way to appreciate this brilliance. If you want to get a real feel, for it though, I advise seeking out a Schofield watch in the metal before making any kind of judgment on them as items. 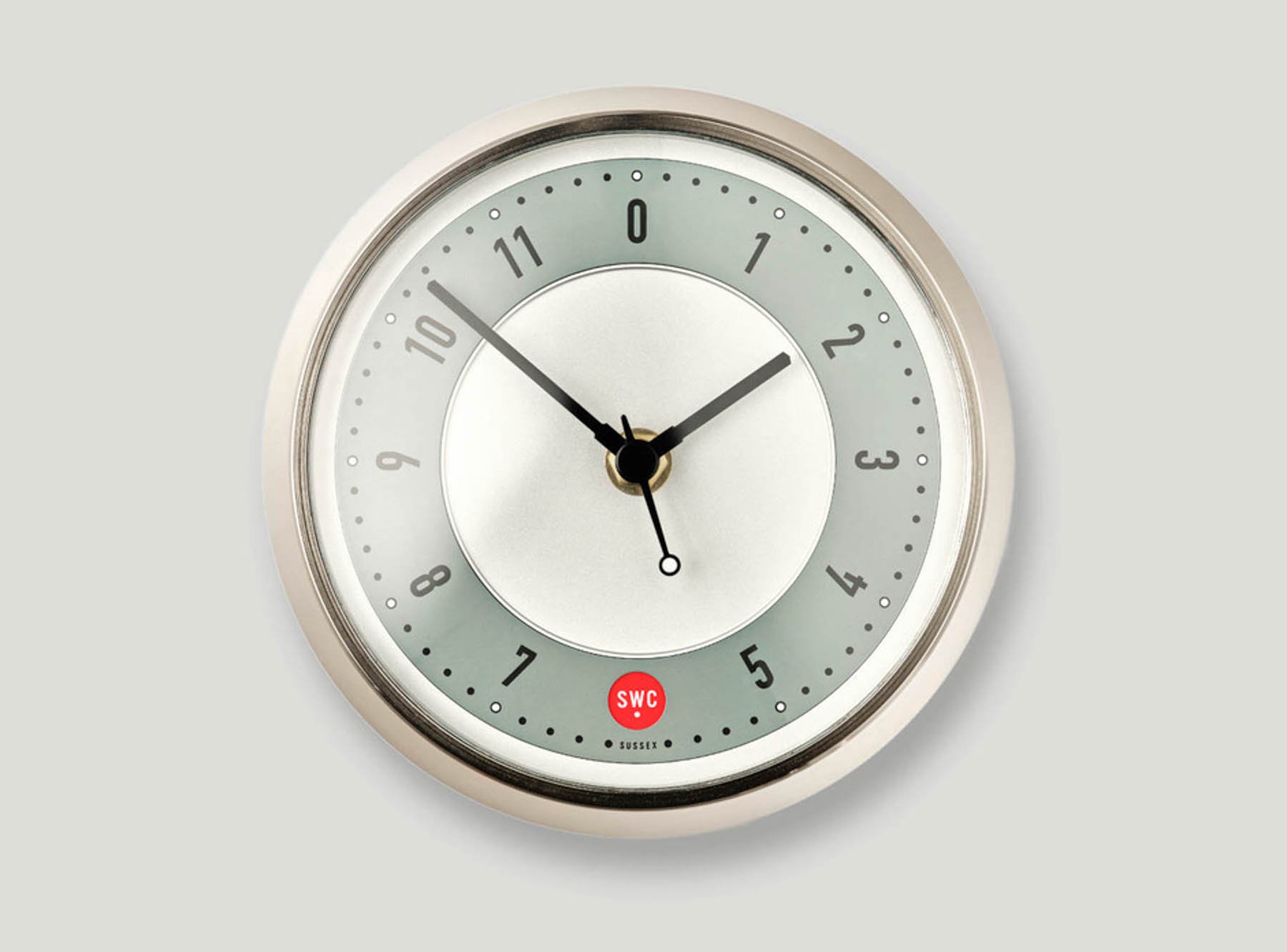 A wearable work of art

Yes, love. It is. It is a wearable work of art. To me, it is an object first and a watch second. That might make my analysis of Schofield and its output only tangentially relevant to the watch industry en masse. But as lovers of beautiful things with a purpose, I hope we can agree that this kind of relationship between a person and their watch is worth discussing and appreciating. 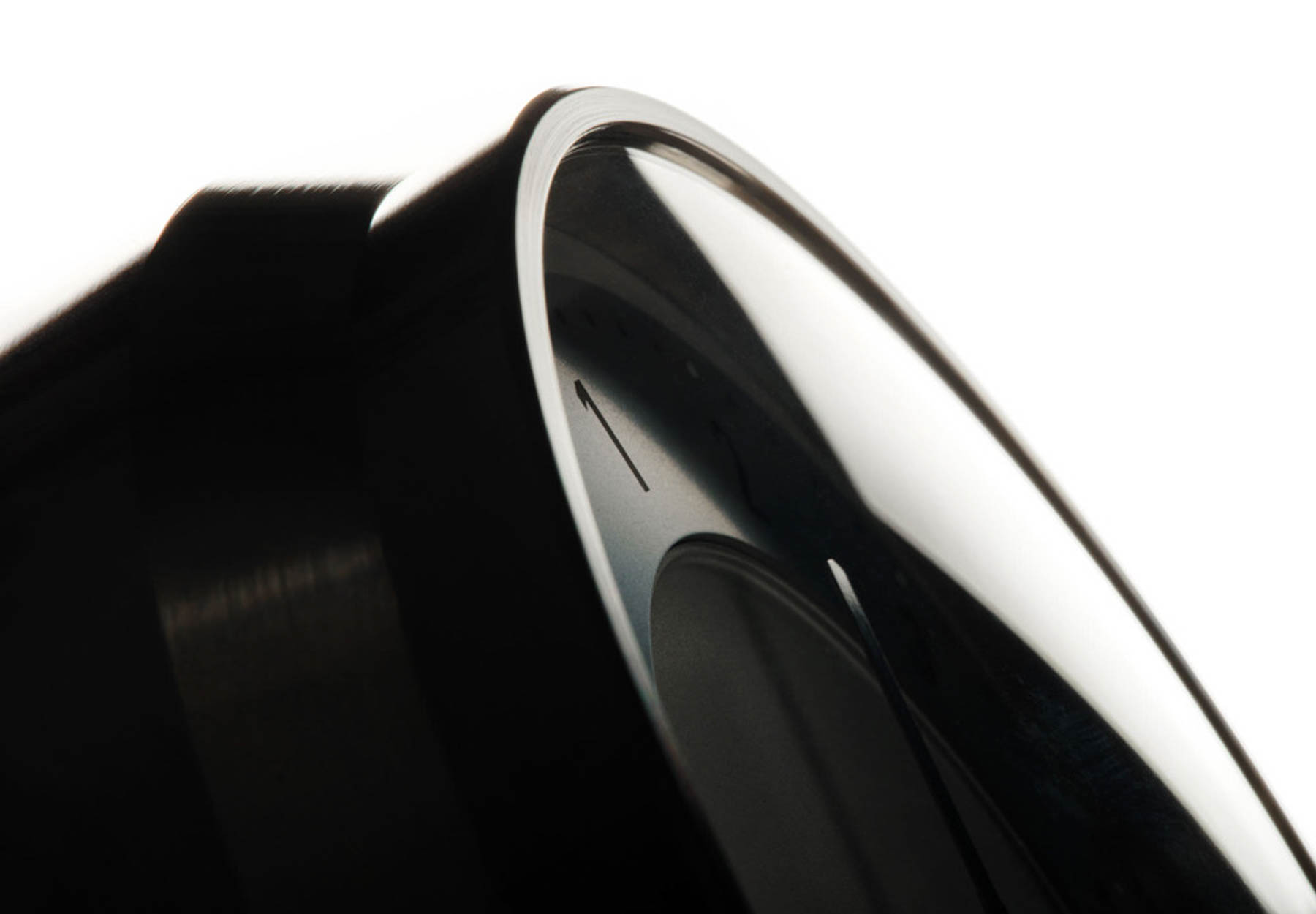 So, in my mind, it is clear: Giles makes great things. Most of his things are designed to be held or worn. Watches, pens, flashlights, fidget spinners, spinning tops, cigar tubes, strap kits, storage boxes, whistles (yep), and so on… As such, they have this wonderful tactile quality that is instilled in each and every item deliberately through the careful selection of materials and finishes. Funny, then, that his latest product, while in possession of the same kind of tactility, isn’t designed to be touched all that often at all.

The Schofield Watch Company Small Wall Clock stands alone in the Schofield lineup as a remote, static item of stoic character. It can be hung alone on the wall, stood on a desk or shelf (thanks to a handy stand), or mounted with a twin, back-to-back on a railway-style bracket if you’re feeling really fruity (which, I must admit, I am). 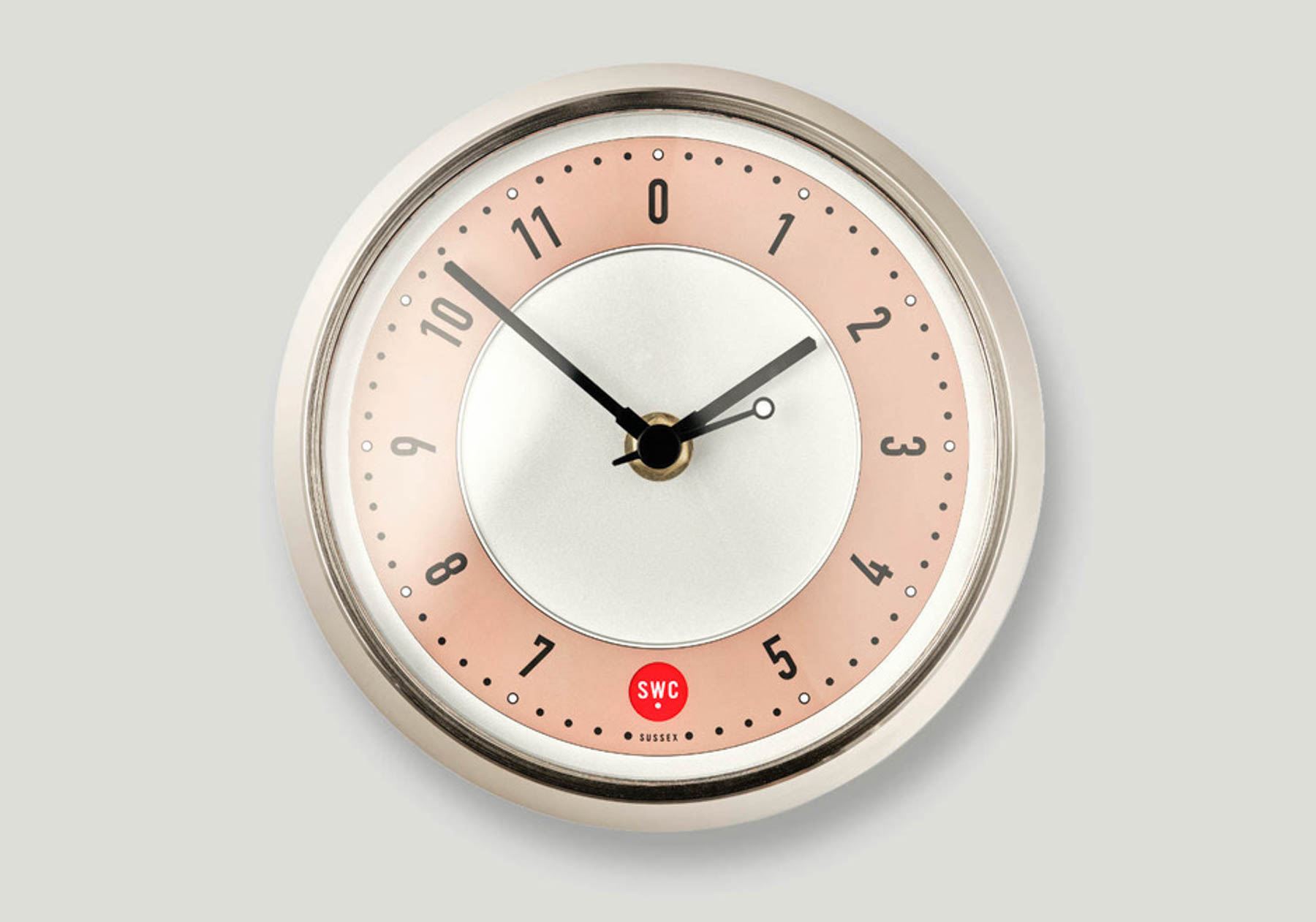 The retail of this stunning (and stunningly heavy) item will be a little under £1,000. And herein lies the “problem”. For once, however, it isn’t a consumer problem. The price is reasonable. In fact, it is more than reasonable. To be totally truthful, knowing what this thing costs to make, I’d say it is utterly bonkers. The projected retail price is one of the worst business decisions ever, and this is coming from Giles who has a track record of sympathetic pricing (even if those unable to appreciate his endeavors from afar whinge about the RRP of Schofield watches). 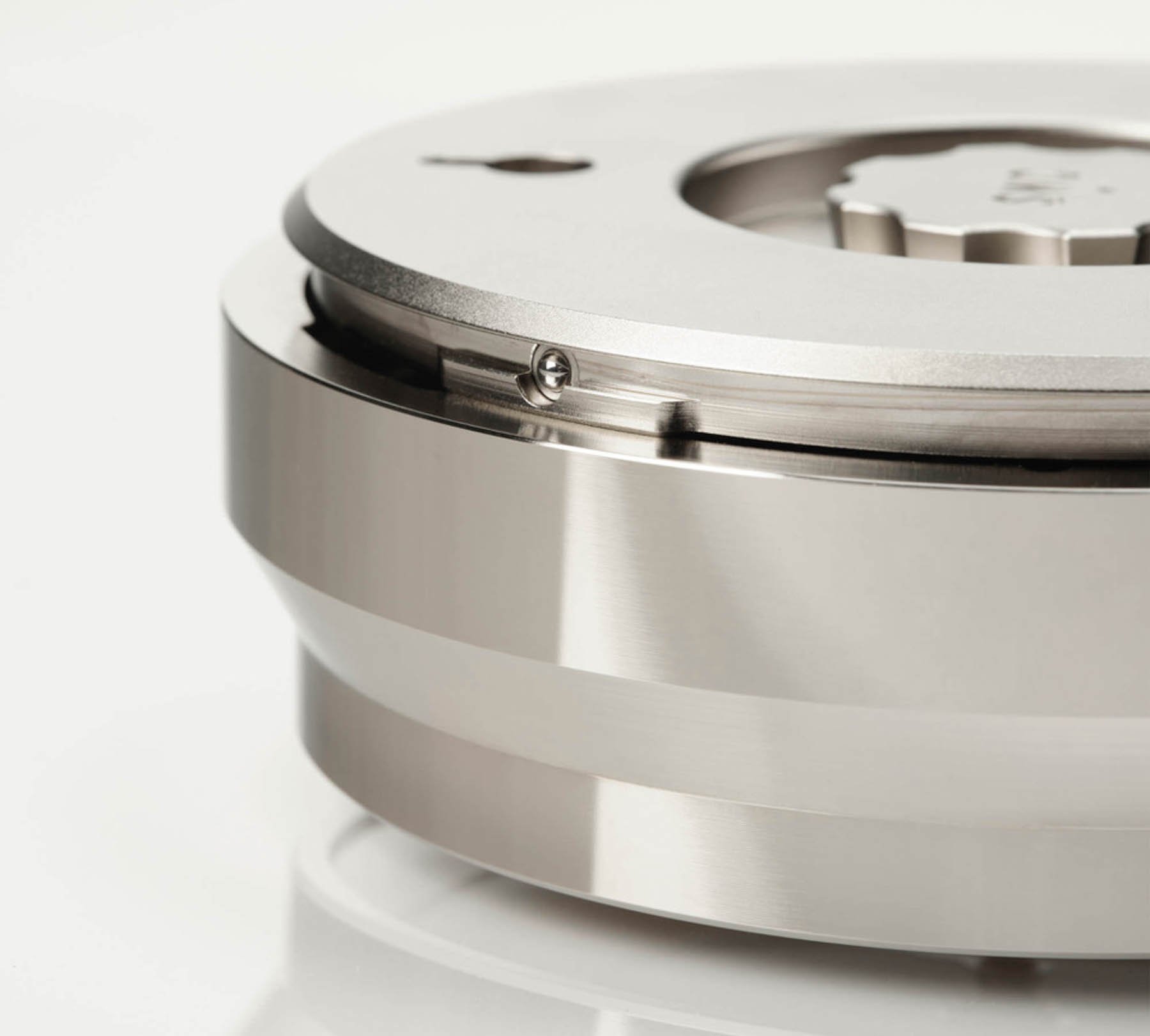 You cannot be serious?

When he told me the projected retail as we were standing on either side of his painstakingly hand-crafted shop counter, I didn’t know what to make of it.

“Wait… but you just told me that the body of the clock cost this and the dial (printed by a watchmaking company, not a clockmaking company to achieve the sharp precision Giles’s vision demanded) cost that, so how did you get to the final figure?”

“Well, I want people to enjoy it.”

“But this is crazy… You must be making barely anything on this project?”

“Honestly, each clock will net me less profit than a single strap.”

“And you think that’s a good idea?” 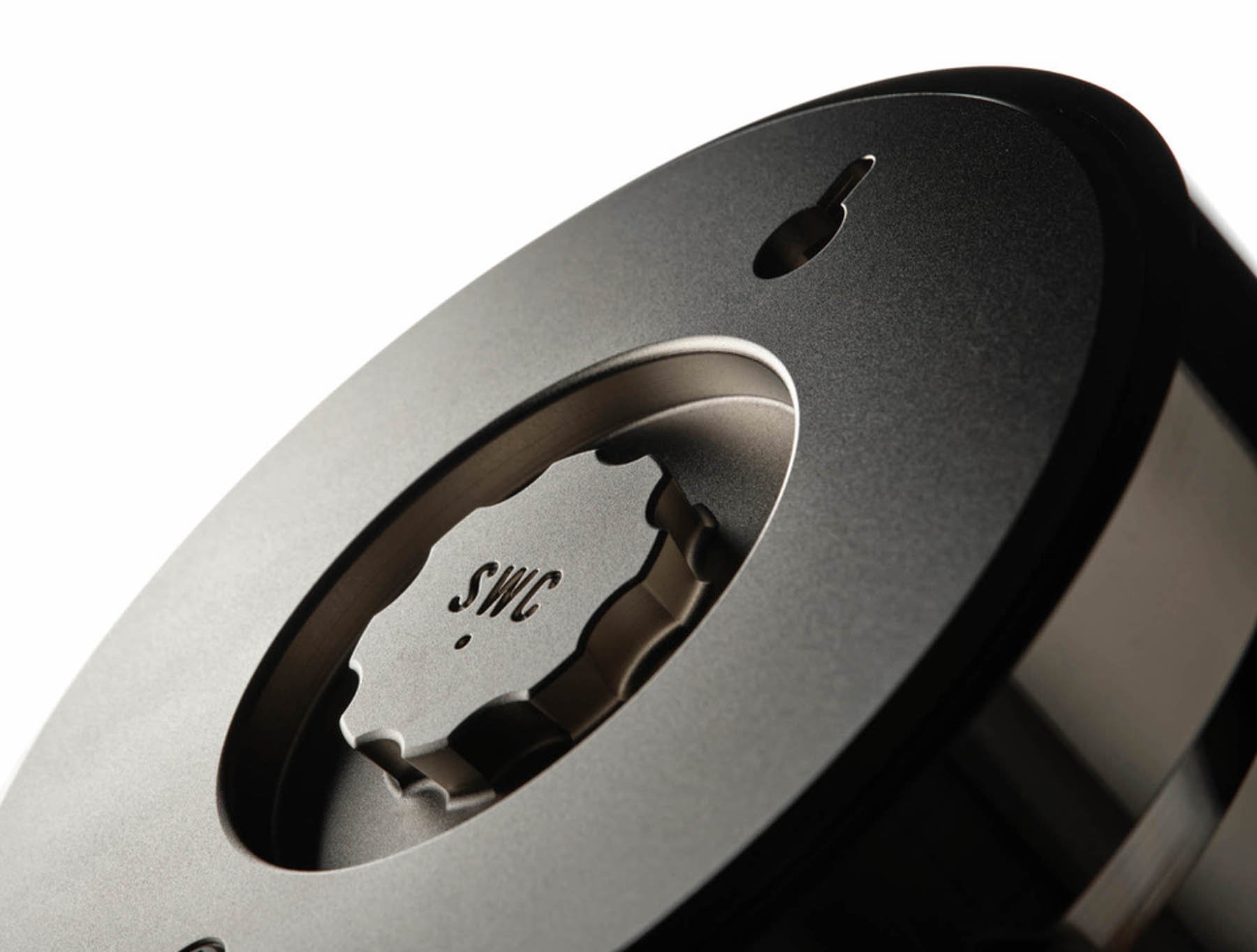 It is a good clock

Yeah. I do think it’s a good clock. For a timepiece powered by an AA-battery-driven high-frequency quartz movement, I think it’s just about the best I’ve seen. In fact, it is easily the best wall clock I have seen in this category. Forget the cheaply made, plastic-cased oversized Breitling, Rolex, or Longines watch heads you might see at sporting events or dotted around airports. Don’t come anywhere near me with a Swatch Maxi. Keep your Junghans kitchen clocks (even the delicious baby blue Max Bill model).

This is something else. It is passion brought to life in an object. It is a gift of time — its creator’s time — to those that appreciate the tracking thereof. And it is exactly the sort of thing we need more of in the world but exactly the kind of thing there is no mechanism to support. 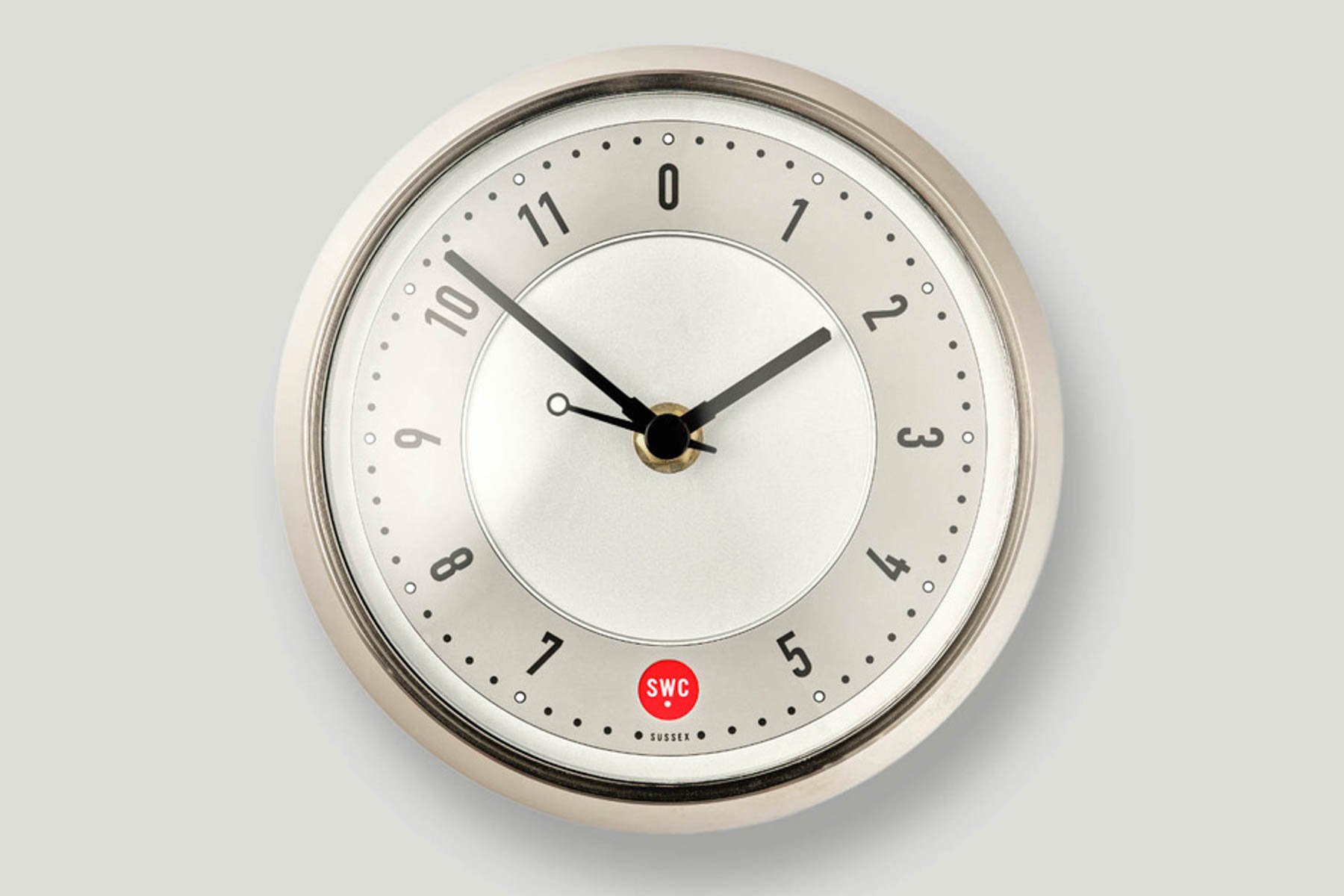 The bayonet back screws off using the oversized gripper below and does so with a satisfying “thunk”. The readily available AA battery that powers the display is commonly available from your local supermarket, hardware store, or street-corner battery salesperson. Schofield reckons you’ll get at least a year out of each battery, but in my experience of high-frequency wall clocks, they can run for longer. In fact, all of the examples I own have lasted between 2–4 years. Either way, a £1 battery every year beats paying for an expensive service every five or so. 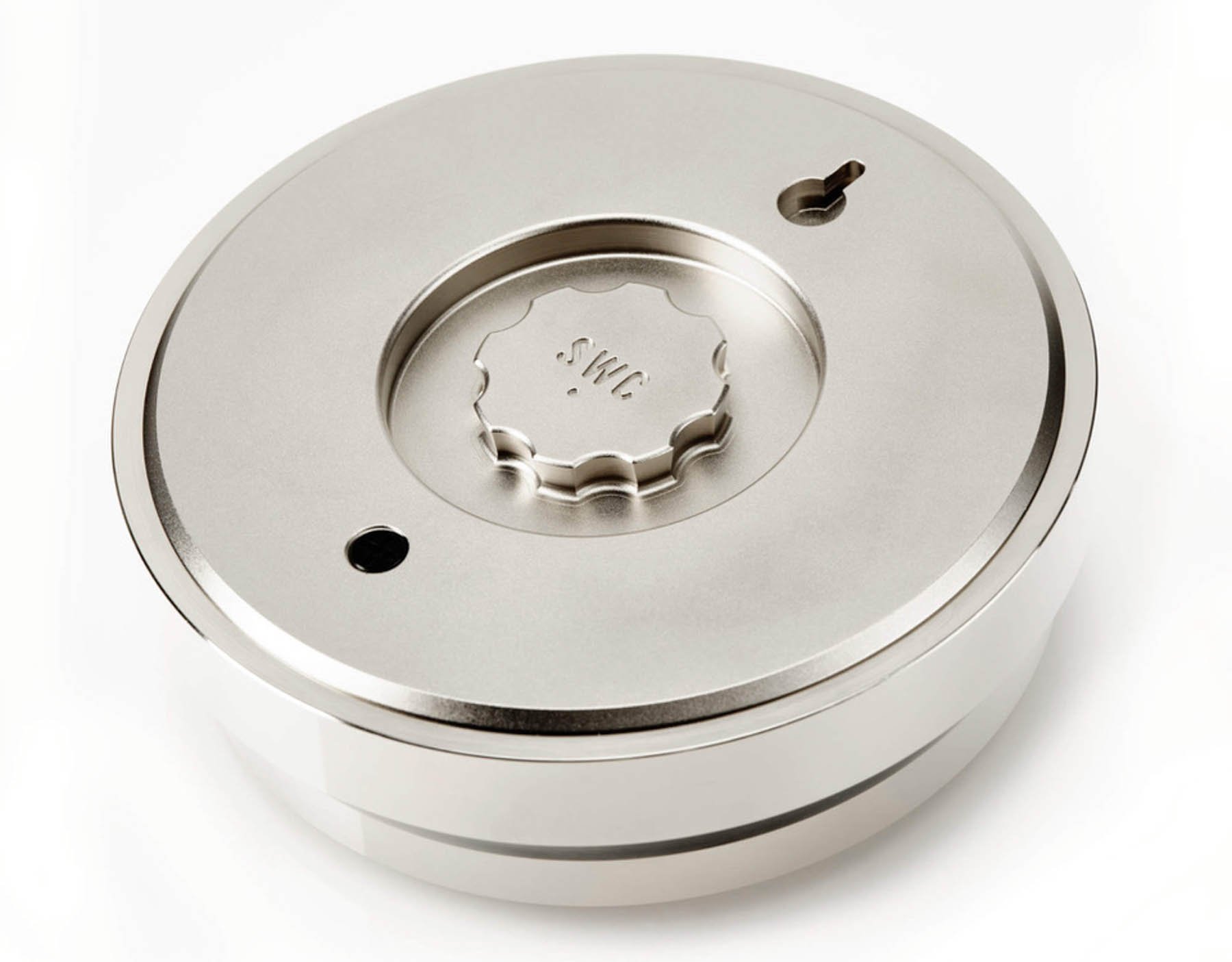 I’ve long extolled the importance of putting one’s money where one’s heart is. I don’t love spending money, but I spend a lot of my disposable income on expensive things like luxury watches, tweed suits, and handmade furniture. Why? Not because I want to show these things off to other people but because I believe in the crafts that go into their making. I want these things to exist forever. To me, these skills and endeavors are the most important aspects of a civilization’s character. It is important to me that they continue to exist. 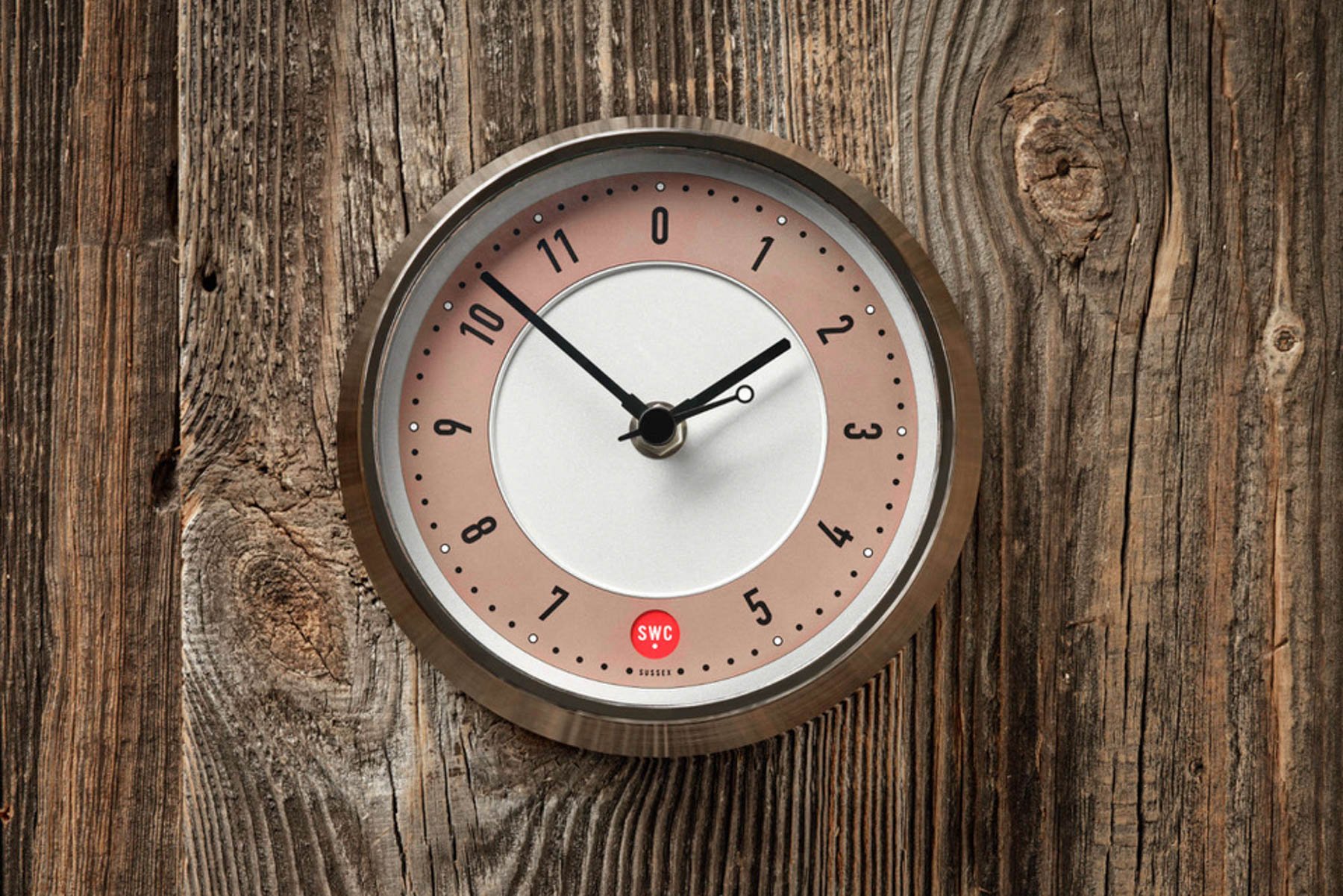 Why these things matter to me

Now, truthfully, I could be quite happy to see these things exist from afar without shelling out for their continued prosperity myself, but that isn’t how it works. Skilled makers, independent craftspeople, masters of dying trades need your patronage in the same way clocks like this absolutely rely on their target audience understanding them and, ultimately, buying them.

I guess the reality of this project is that it is not itself the lynchpin to Schofield’s continued existence. It is a manifestation of intent, yes, but it is not the brand’s bread and butter. It does not or will not pay the bills. However, it is a gift to those that have bought the products that exist in a (slightly) more commercial vein that have, thankfully, kept the lights on in the Riverside Store and the fire burning within its proprietor.

It’s a remarkable thing. I don’t doubt it for a swept second. The only question that remains for me is whether I buy one or two of them… and maybe a strap for good measure? Learn more about this mild insanity, available for £980, here.