Does the top condition rule apply to every watch? Today we will challenge the holy mantra that pristine condition is the ultimate key in determining how much we can enjoy a watch. For the purpose of this study, we will be looking at none other than the top collectible Seiko 62MAS diver.

That morning I woke up quite early. It was not even 7 am when I put my daughter in her bike carrier and headed to the bakery to grab some fresh croissants before my wife and son woke up. I didn’t want to make much noise before we left, so I grabbed the first watch I had on hand. Symbolically enough, it was last year’s prime acquisition, a small crown Seiko 62MAS that came fitted on the most badass bracelet ever. The Maruman “bike chain” bracelet has a story of its own. 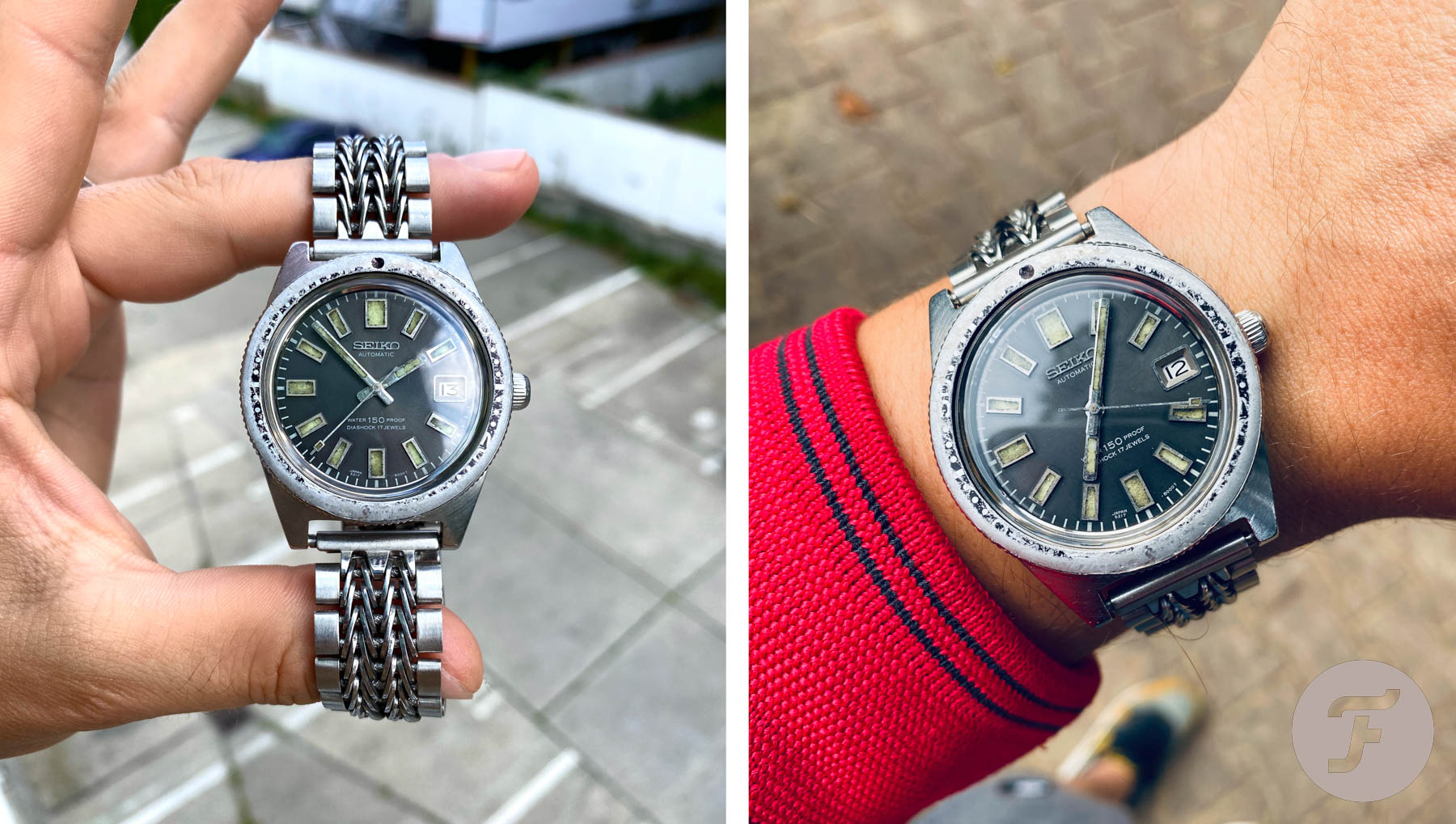 On our way back we had another mandatory stop, the playground. After checking and trying every single “vehicle” left behind by other kids, my daughter ended up on a seesaw. That’s the moment when I checked the time and realized how much I love this beaten old Seiko. It was during this particular Sunday morning, with nothing much going through my mind, that I asked myself this question. “Do I like this beaten fella more than the crispy big-crown?” Even the glimmer of this idea scared me a bit, as I thought nothing could beat the beautiful 62MAS that I picked up about two years ago. The idea that the top position might be stolen from the NOS piece on the OG strap with tags by some forgotten underdog was mildly disturbing. 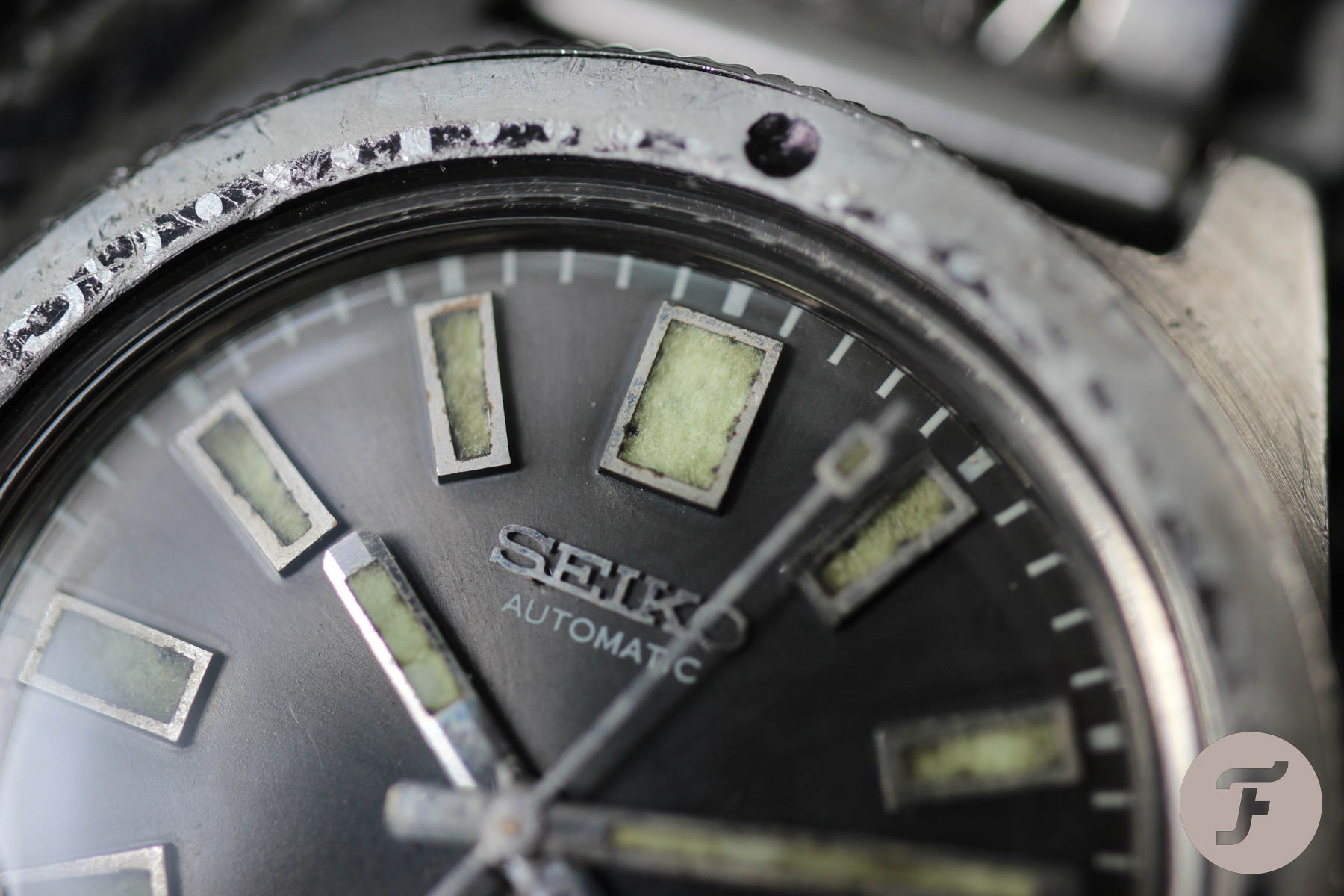 I thought about it a lot. How is it even remotely possible that such a chewed-up watch can instantly steal the prime spot in your heart? The other day, I chatted with Erik Strickland, one of the biggest Seiko enthusiasts on Instagram. We talked about my super-beaten small crown Seiko 62MAS that I recently acquired, and he nailed it quite precisely. He responded to my post in a private message with his own post. It featured a similarly worn — no, even more worn — 62MAS. He has about five 62MAS watches and this one literally doesn‘t even have a single spat of color left on the dial. Erik concluded very pointedly that “there’s a curve where watches go from awesome to ‚meh‘ and back to awesome with wear.”

I was not actively seeking another 62MAS. But when a friend shared a picture of a highly beaten small crown 62MAS with a cracked crystal, I thought it might be a nice project for the years to come. After a bit of thought, I decided to take a chance. Honestly, not even for a millisecond did I think I would keep it as is. The moment it arrived, I decided to source new parts, including a bezel insert and crown. Funnily enough, I started with the central seconds hand. I sent the picture of the watch in its original condition to watchmaker James Marien, who specializes in Seiko watches.

I asked James politely whether he doesn’t have a central seconds hand to part with. His response was quite unexpected. “What do you want the central second for? Did you not notice that you have the central second there? It just fell off the pinion,” James challenged my request. I looked at the listing again and he was right. I checked the images in a rush and what I thought was a huge crack in the crystal, in reality, it was the central second. Well, some welcome good news that saved me a few bucks already. 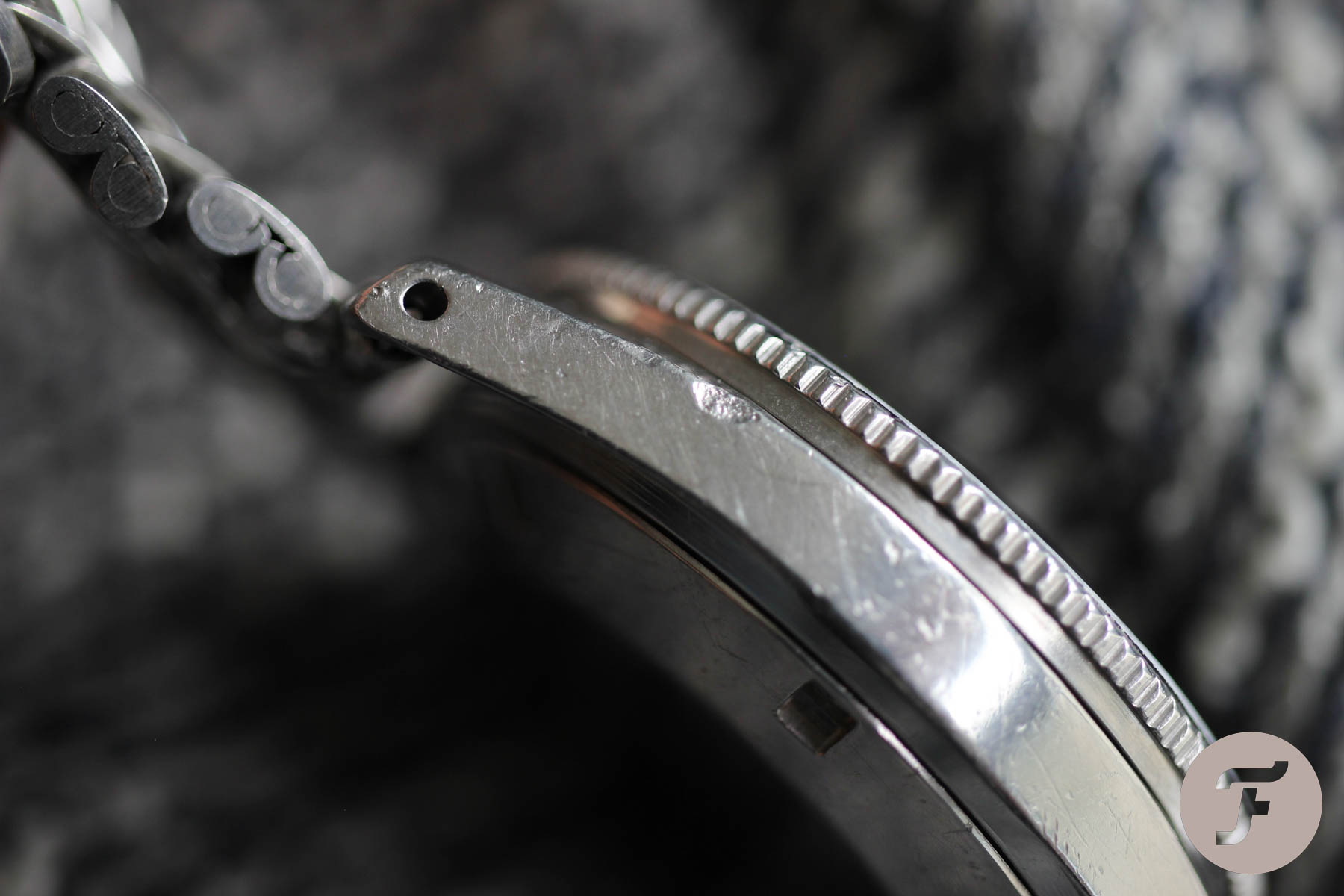 In the meantime, I was able to source a NOS crystal for my 62MAS. As it usually goes, it got to me before the watch did. Shortly after unboxing, I took the small-crown 62 MAS to my watchmaker as I wanted to see what lay behind the crystal. As it turns out it was a wonderfully preserved dial! At this point, I was still sure I would buy a new crown and bezel insert. I dropped the watch off at my watchmaker and continued on with life. A few weeks later, I got a call from him saying that the watch is ready. When I came to pick it up, I tried it on and began to realize that I was about to totally change my opinion on what to do next. 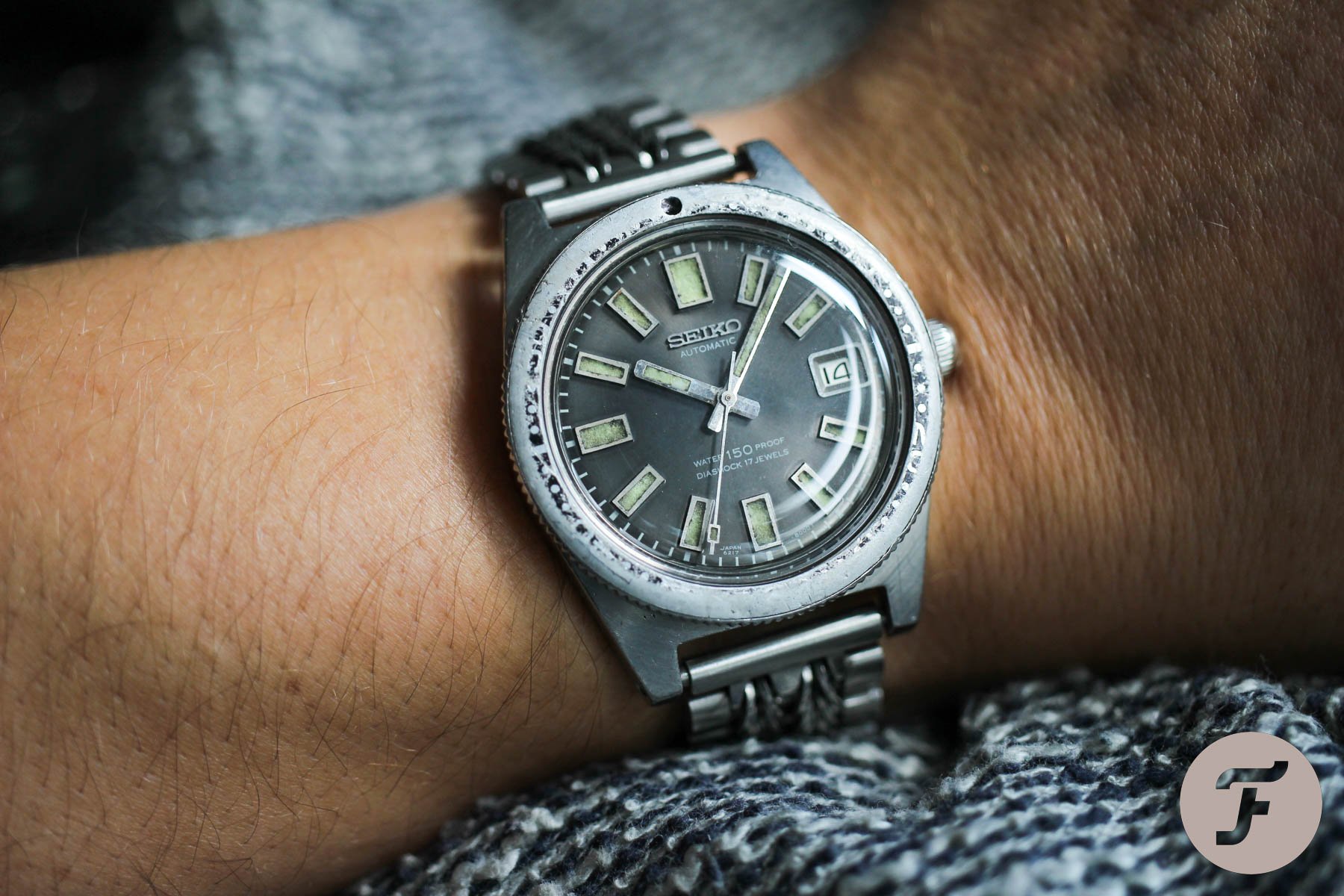 And the final plan on what to do next quickly turned into doing absolutely nothing. I realized this watch is worn to such an extent that it has earned my respect. It reminds me of a beautiful Alpina Sea-Strong 10 from its original owner and Swedish diving pioneer. This being the case, I even kept the original crystal on the watch. With every additional day with the small crown 62MAS on my wrist, I am more connected to it and my desire to learn more about the original owner and his life grows exponentially. Unfortunately, the story will be a mystery forever. But this watch is so worn it suggests the owner didn’t pamper it and handle it only with white gloves on. The watch served its purpose, whatever it might have been. It’s hard to imagine even a modern watch being exposed to such a level of daily beating.

Coming back to Erik’s point from above, if there were only some chips to the color of the bezel insert, it would look “meh”. I probably would have the urge to make it perfect. But this level of extreme beating makes your jaw drop, especially if you reveal it’s a slightly pale, but otherwise untouched shiny dial. The dirty lume indexes look like 12 guys in dirty overalls in an opera house full of people in black-tie on this pristine, grey, glass-like dial without a single scratch or stain. 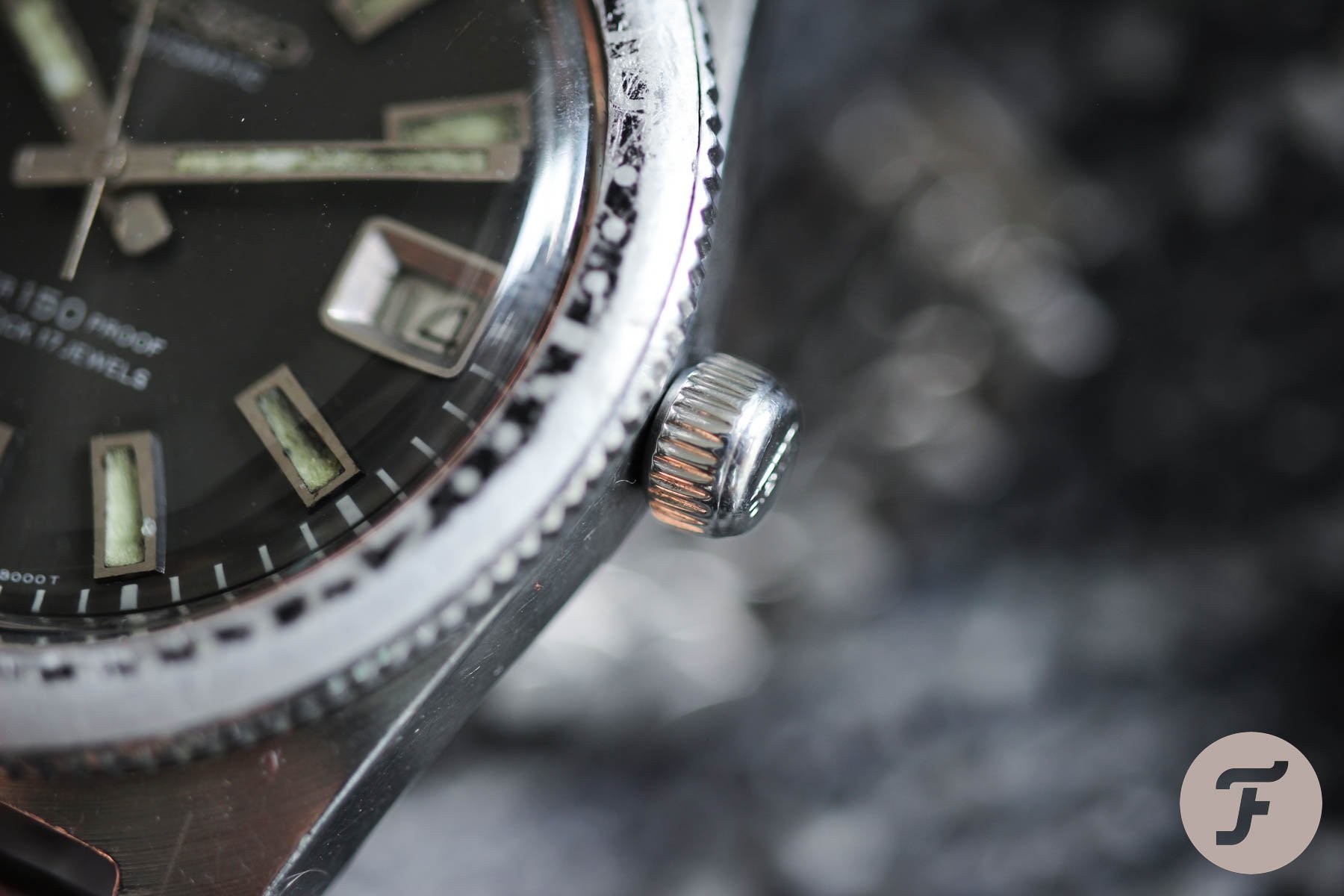 I just double-checked the condition on the big crown 62MAS. The perfectly visible dolphin on the case back has no scars from a poorly used opener tool. All edges are perfectly sharp, circular brushing on top and contrasting polished finish on the sides. Except for slight aging to the date disc, the watch has no other signs of damage or age. The lume is perfectly fresh and the bezel insert is almost untouched. In stark contrast, the small crown 62MAS’s bezel edge looks like it was eaten away by a grinder. The small crown does too, looking almost like the rounded hat-like crowns from the forties and fifties. The sunburst finish is still visible, but the edges have long lost their sharp edge. The case back is there, but besides the serial number, not much else can be identified. 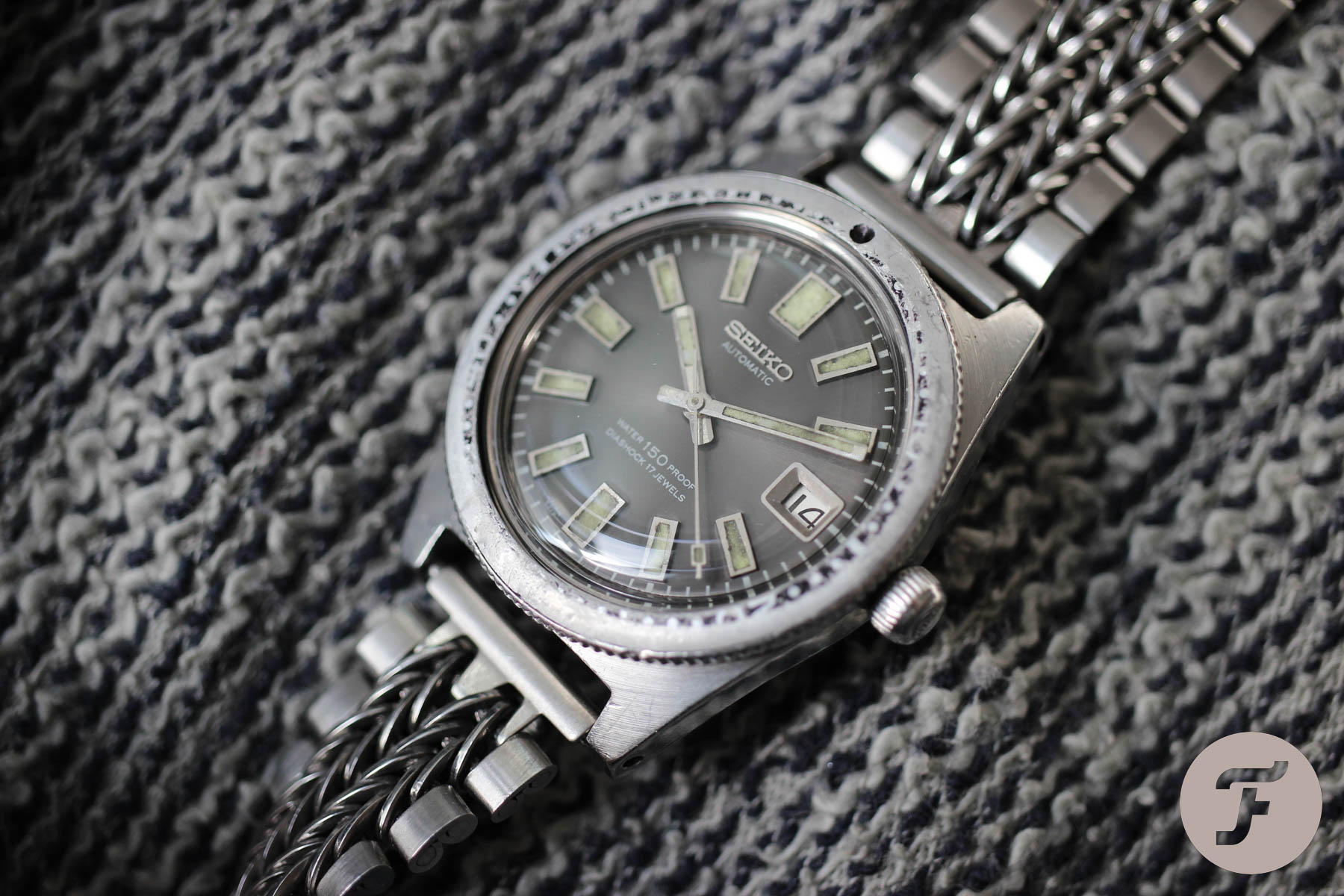 Not every watch would look awesome when beaten to the bone, I’ll be the first to admit that. A tool watch designed to endure extremes can look awesome if the highly beaten case protects what’s essential. And this is the important point. If the dial was scratched in any way or developed any sort of stain, the watch would fail. And with it, its charm and authority would wither away. The “value” of Wabi-Sabi can be a matter of long debates, but many see it as the natural “healthy” patina so special to Seiko. I believe it is worth finding the right balance in your collection between what is worn and aged and what has remained untouched and preserved as if it left the factory yesterday.

I am not trying to sell you junk as a treasure. That’s why I left out the market value aspect completely. Imagine you might even already have a watch like this. The question is: what would you do with it? would you restore or enjoy it as is? I will tell you what fascinates me the most. After a standard treatment at my watchmaker’s, the small crown 62MAS runs like new. “The movement was in surprisingly great condition,” my watchmaker said when he handed me the small crown 62MAS. And that’s pretty amusing and satisfying judging by its looks. Because at the end of the day, if every 62MAS in the world out there were in NOS condition, that would be, ladies and gentlemen, a real tragedy…