If you love Japanese culture, you will probably be familiar with the Japanese form of theatre known as “kabuki”. If you are unfamiliar with the name itself, you will probably recognize it when you see the image of a play below. Kabuki inspired Seiko to develop two new models for its Presage Sharp Edged Series. Both models feature dials that are inspired by the colors and patterns used in kabuki. The Seiko Presage SPB329 and SPB331 show that the mixture of traditional Japanese culture and modern design leads to surprising results.

When the aptly named Sharp Edged Series debuted in 2020, Seiko introduced a concept with sharp-edged case designs combined with dials inspired by Japanese culture. As Lex explained in his review of the Presage Sharp Edged GMT models, it does remind us of the Grand Seiko design philosophy. The watches we have seen in the series also have visual connections to the famous Grand Seiko models. With these newest models, traditional elements of kabuki take center stage. The result is a pair of beautiful dials that are true showstoppers. 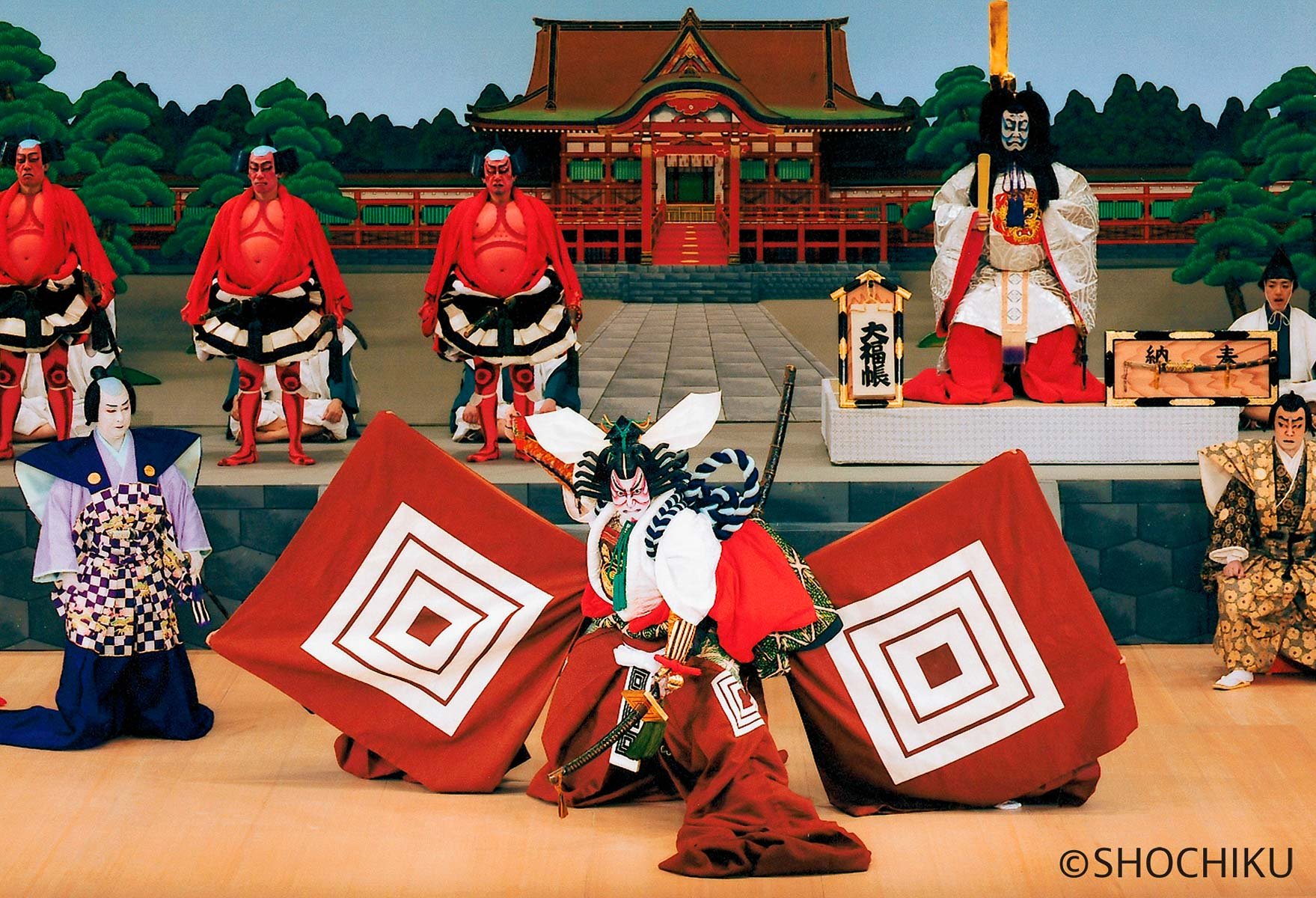 Seiko and the legacy of kabuki

The roots of kabuki date back to the 17th-century Edo period in Japan. The traditional art form is still very popular in its native land today. For the creation of the two new Presage Sharp Edged models, Seiko worked with Ebizo Ichikawa. He is one of Japan’s most prominent and influential kabuki actors. The 44-year-old actor belongs to Naritaya, one of the most famous lineages in kabuki, founded by Ichikawa Danjuro I in the 17th century. 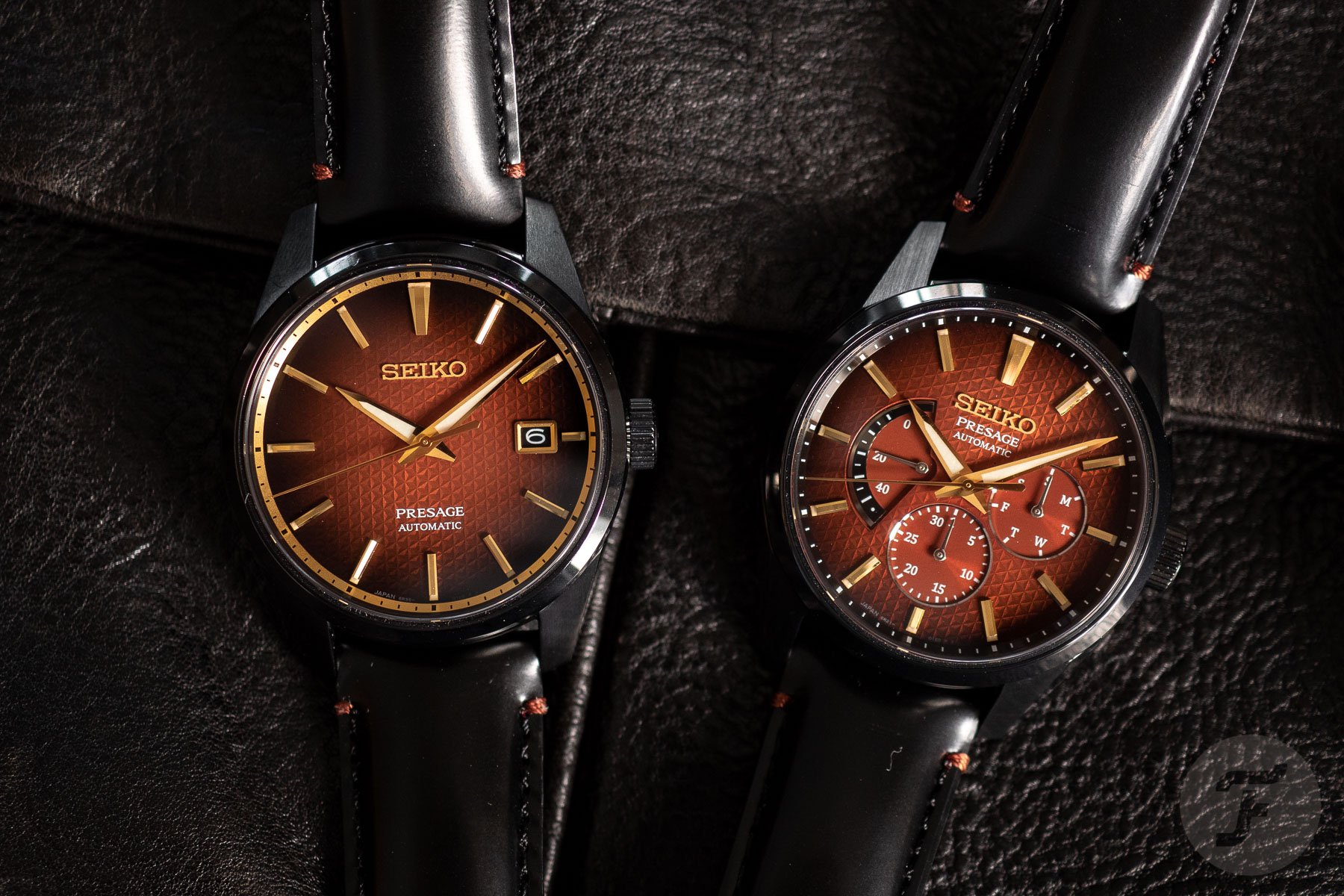 Ebizo has been a Seiko ambassador since 2020, and he helped with the development of both the pattern and the traditional kabuki color for the new watches. They both utilize a stainless steel case with a black hard coating. Combined with the black leather strap, it serves as a stealthy canvas for the rich dial. The kabuki models also both feature a gradient reddish-brown dial color also known as kakiiro — literally, “persimmon color”. It starts light in the middle and is darker on the edges to contrast the gold-colored hands and hour markers. 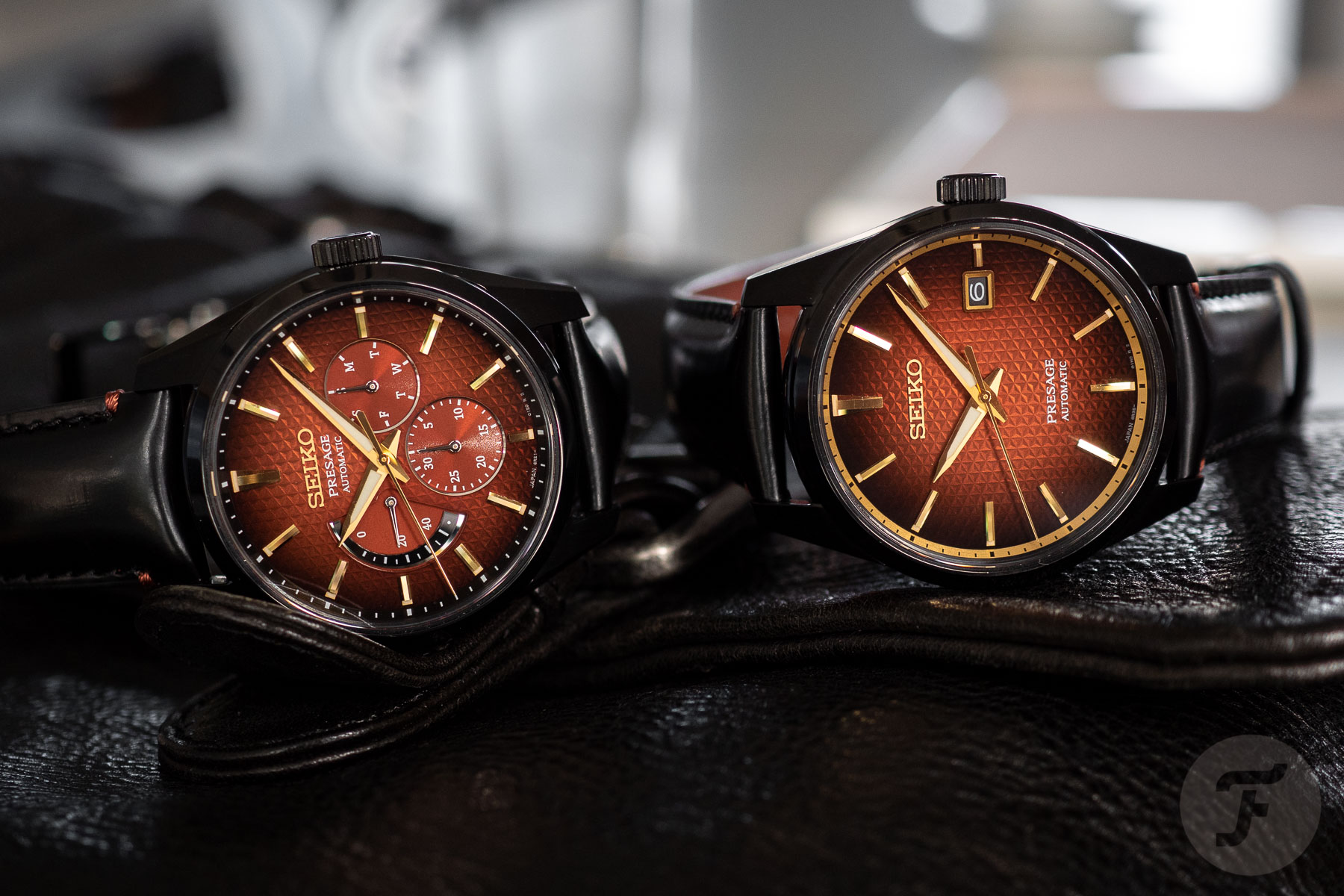 The color in the center of the dial is a link to the Ichikawa family, who first used it generations ago in their kabuki costumes. Besides the special color, the dials also feature a Japanese hemp-leaf pattern known as asanoha. The pattern has been used in the fabric of kabuki costumes for centuries, and it is still used today in Japanese fashion and design. One of the main reasons this pattern is still relevant is the influence of popular kabuki actors. As a result of the geometric pattern, the dial looks different depending on how the light hits it at different angles. Now, let’s focus a bit more on the specifics of the two models. 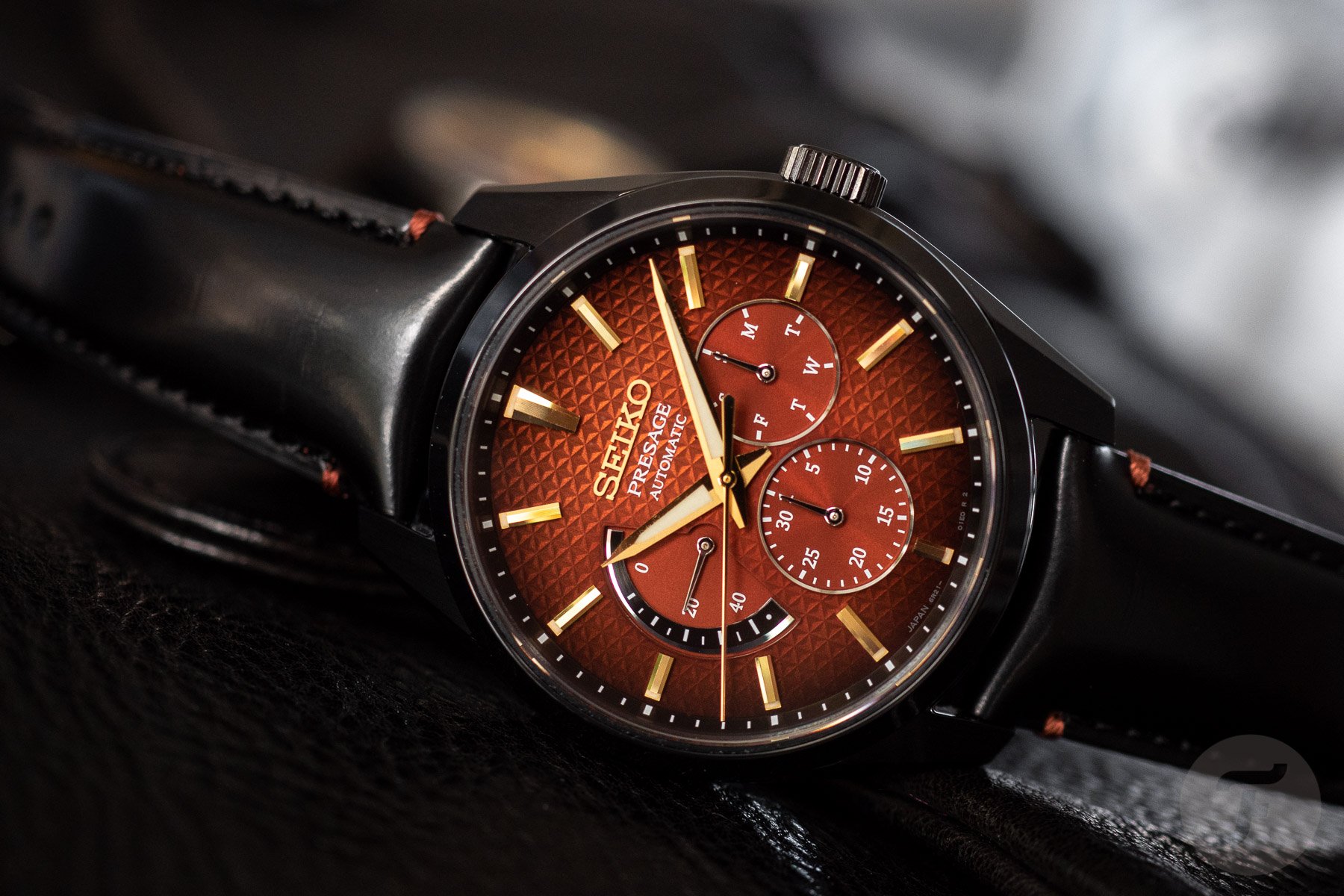 The first of the two is the Seiko Presage SPB329. The watch features a 40.2mm black case that is 12.2mm thick and water-resistant to 100 meters. The shape of the case is quite angular, giving it a distinctly modern feel. The watch is equipped with a sapphire crystal with an internal anti-reflective coating. Under it, you will find the brown dial with gold-colored hour makers and sharp-looking gold-colored hands. The hour markers are textured on the top and feature a polished finish on the bevels for an extra-dynamic feel. The hour and minute hands are coated with Seiko’s proprietary Lumibrite material for readability in darker lighting conditions. If you let your eyes travel over the dial, you will first find a day indicator at 3 o’clock, followed by a date indicator at 6 o’clock, and a power-reserve indicator at 9 o’clock. 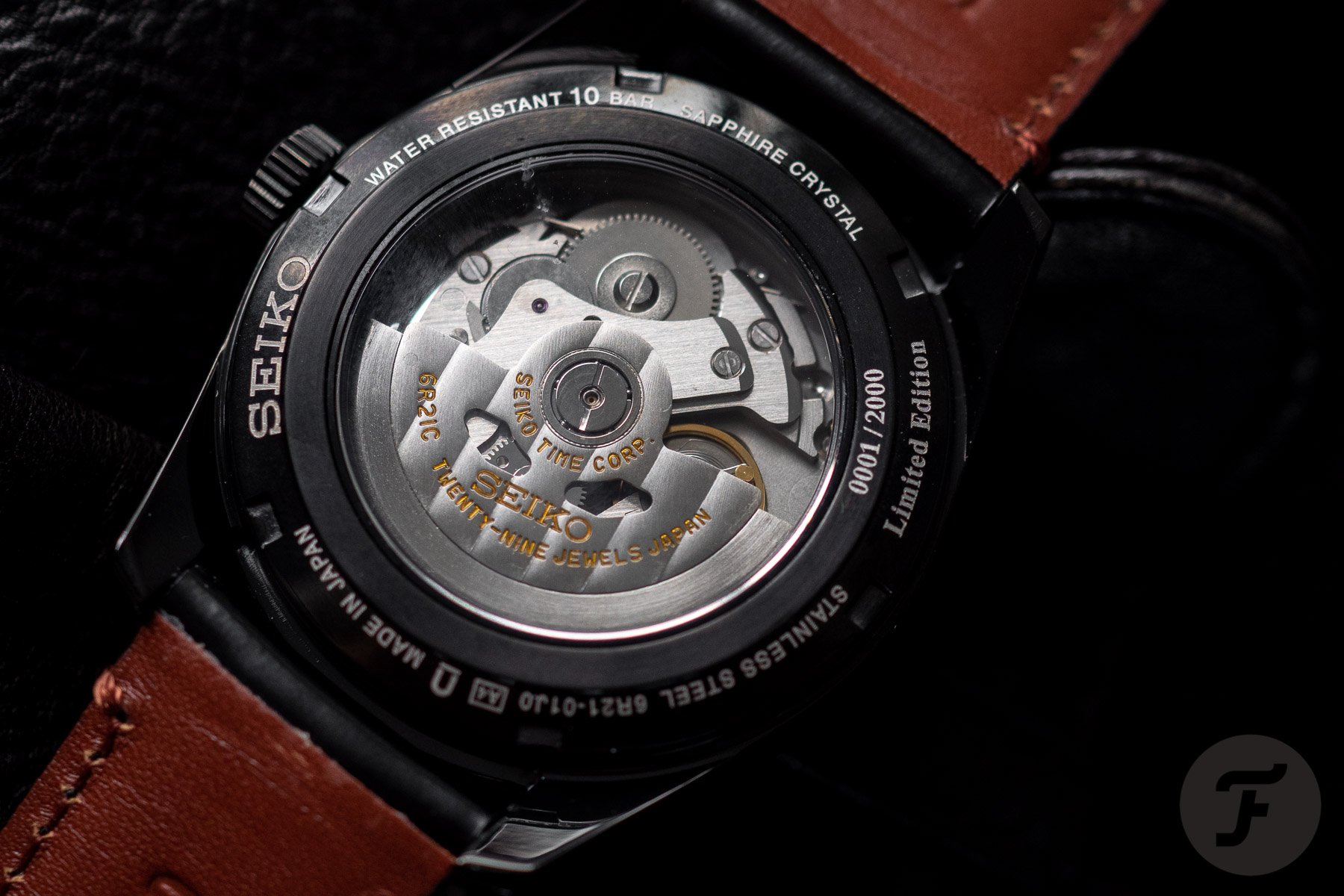 If you turn the watch around, you will see the Seiko caliber 6R21 that powers the watch. It operates at 28,800vph, has 29 jewels, and provides 45 hours of power reserve. The watch is delivered on a black leather strap with a three-fold clasp with a pushbutton release. Additionally, the back of the strap is the same kakiiro color as the dial. This is another nod to the Edo period when Japanese citizens were not allowed to wear bright colors in public. As a result, many people used vivid colors on the reverse side of their clothing. 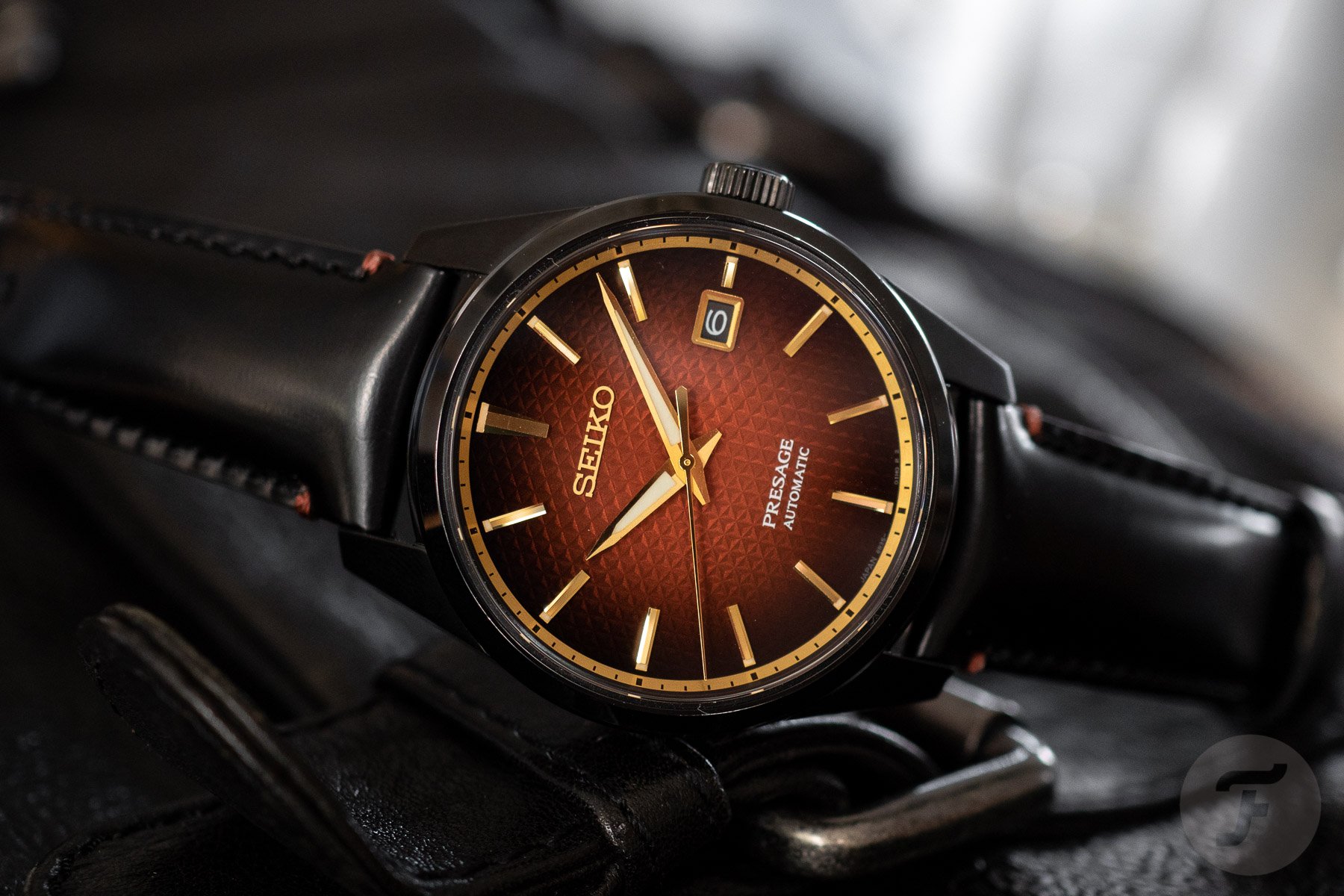 The second of the two models is the Seiko Presage SPB331. It features a slightly smaller 39.3mm black case that is 11.1mm thick and also water-resistant to 100 meters. Besides being slightly smaller and thinner, the watch is also easier on the eye. The dial features a date window at 3 o’clock, and Seiko added a gold minute track on the dial’s periphery. It gives the watch a slightly more dressy feel, although the stealthy black case with the lively color makes for a remarkable combination that is definitely not typical of a dress watch. 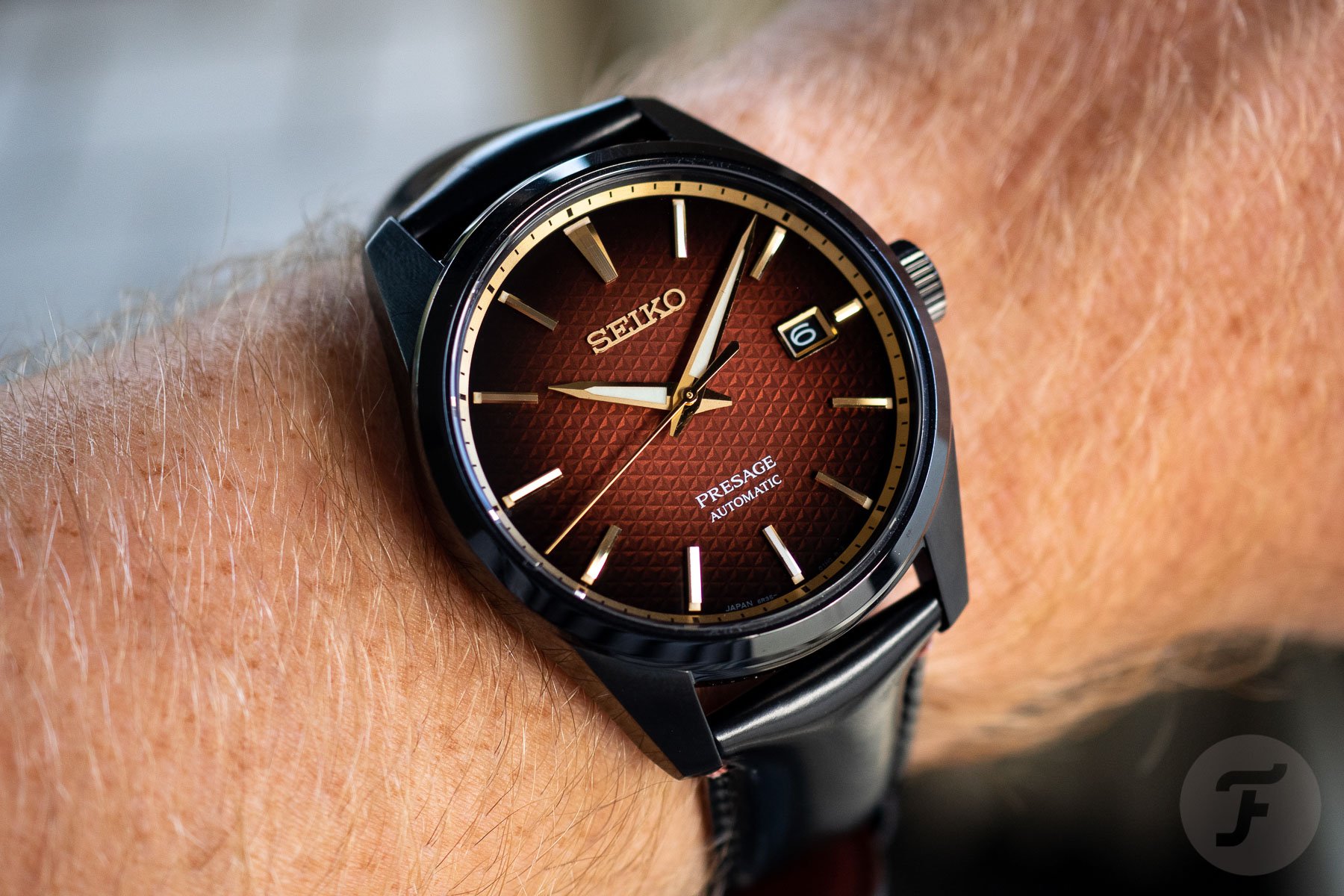 If you turn the watch around, you will see the Seiko Caliber 6R35 that we know from a string of other Seiko models. The movement operates at 21,600vph, has 24 jewels, and delivers 70 hours of power reserve. Both watches are magnetic-resistant up to 4,800 A/m or 60 gauss. That number is the ISO standard for antimagnetic watches. The SPB331 also comes with the same black leather strap with the kakiiro lining and the three-fold clasp with a pushbutton release.

My first reaction to these two new kabuki-inspired models was that I would have loved to see them with uncoated stainless steel cases. While I understand the stealthy appearance, a plain stainless steel case would have made the SPB331 a great-looking dress watch. By making the case black, the watch becomes more of an acquired taste. Both watches are very easy to wear with their respective case sizes. My favorite of the two is the cleaner SPB331. The lack of sub-dials allows the color and the pattern to shine, which is what the kabuki-inspired concept is all about. The addition of the gold minute track was not necessarily something the watch needed, but it stands out a lot less on the wrist than the pictures might have you think. 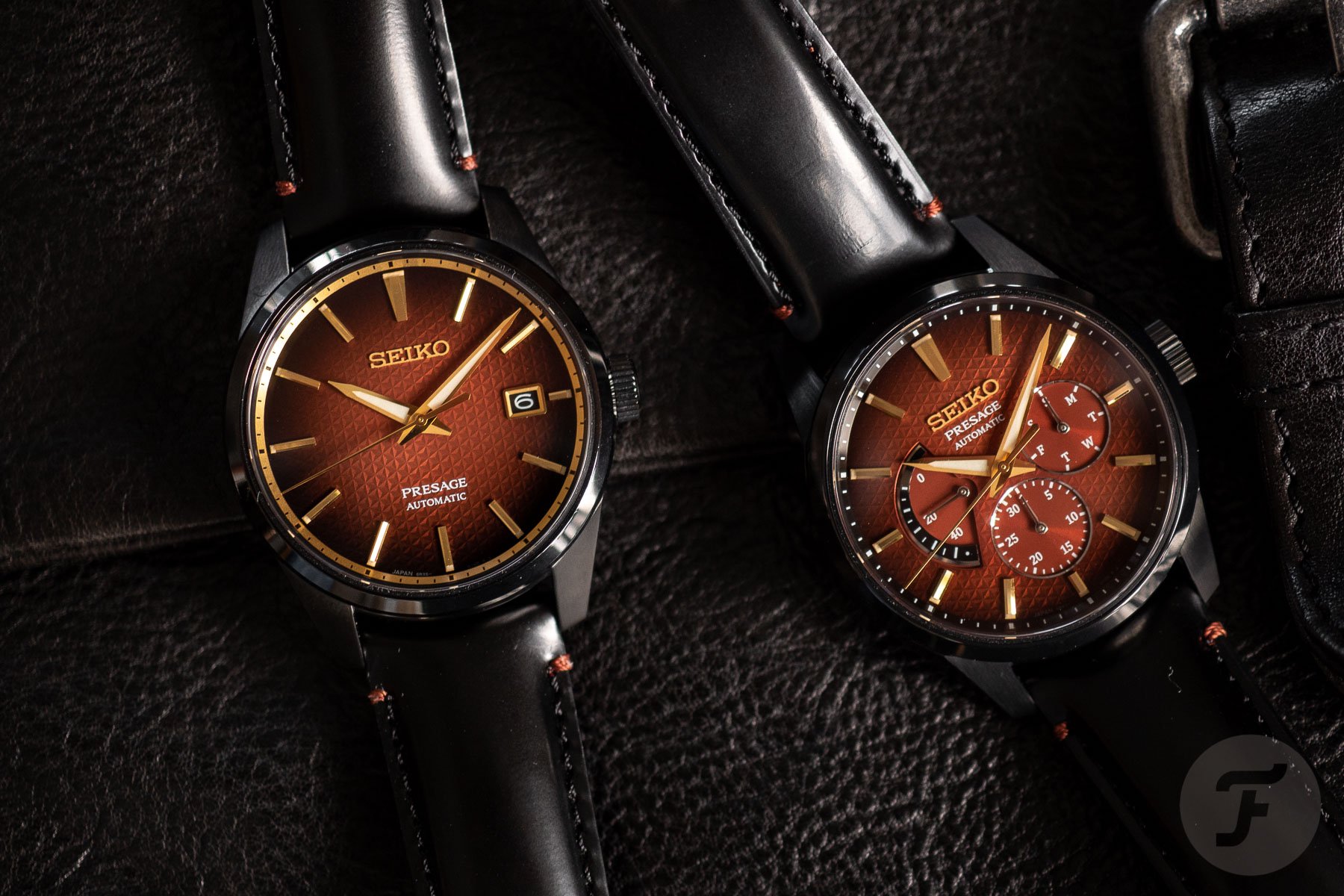 Both models will be produced in a limited run of 2,000 pieces each. They will be available starting October 2022 at Seiko boutiques and selected retail partners worldwide. The Seiko Presage Sharp Edged SPB329 comes in at €1,200. The Seiko Presage Sharp Edged SPB331 is slightly cheaper at €1,050. The prices are in line with comparable models in the same Presage Sharp Edged series. I personally like both of these watches because they bring something conceptual that is very interesting. Finish-wise, I prefer the more traditional Presage SPB167, for example, which is part of the same Sharp Edged series. It shows the angular case better than these two black models. Having said that, I have no doubts these two watches will find their way to happy customers quickly.

For more information, visit the official Seiko website, and let us know what you think of these releases in the comments.