Ah Seiko…a brand that almost all of us on the Fratello team follow avidly. We meet with them often, whether in the Netherlands, Frankfurt or Basel. We’ve traveled to Japan to see their works and a few of us avidly hunt down their vintage releases. So, yes, you could call us fond. We’ve also watched the highly conservative brand slowly transform by offering pieces globally that would have been relegated to the “JDM-only” classification as recently as 4 years ago. But let’s just say that some secretive, enigmatic measures remain and that’s exactly what led me to going hands-on with the newly released, Seiko Presage Blue Enamel Limited Edition. 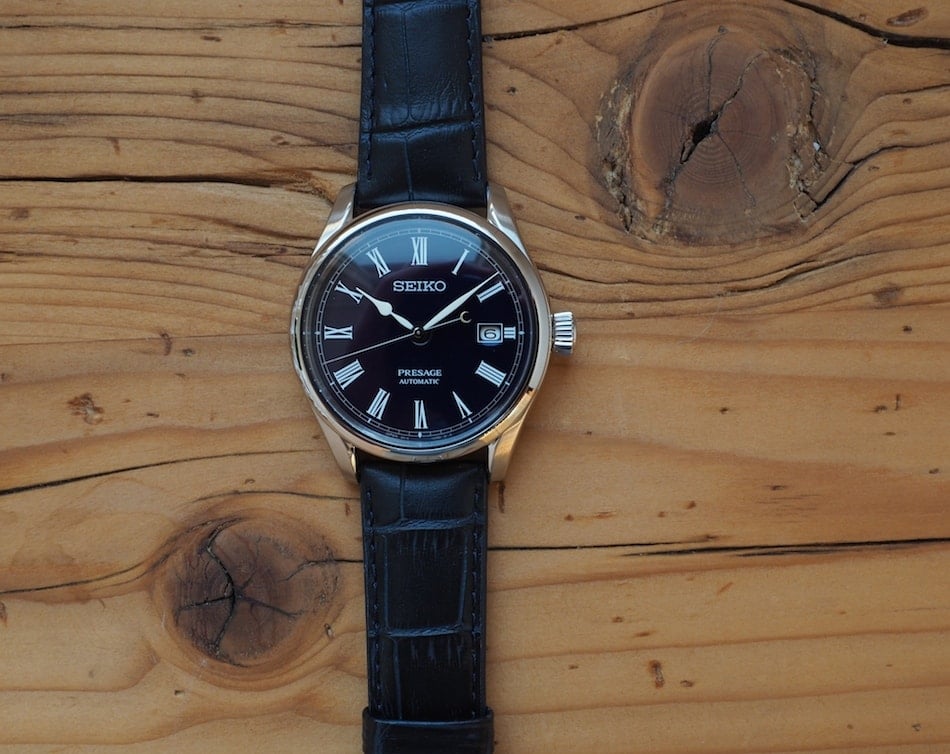 Officially released from embargo on December 7th, the Seiko Presage Blue Enamel Limited Edition was a watch I first came across in August. Yes, August. Seiko Germany shot me a note and stated that pre-production versions of the new release would be making the rounds at Seiko Boutiques in Europe during late September. So, on September 23rd, I had an appointment in Frankfurt to handle and photograph the watch. Was it unorthodox to see and shoot a watch roughly 2 ½ months before it was allowed to go public? That it was, but I suppose you’d expect such organization from a brand that leaves very little to chance. 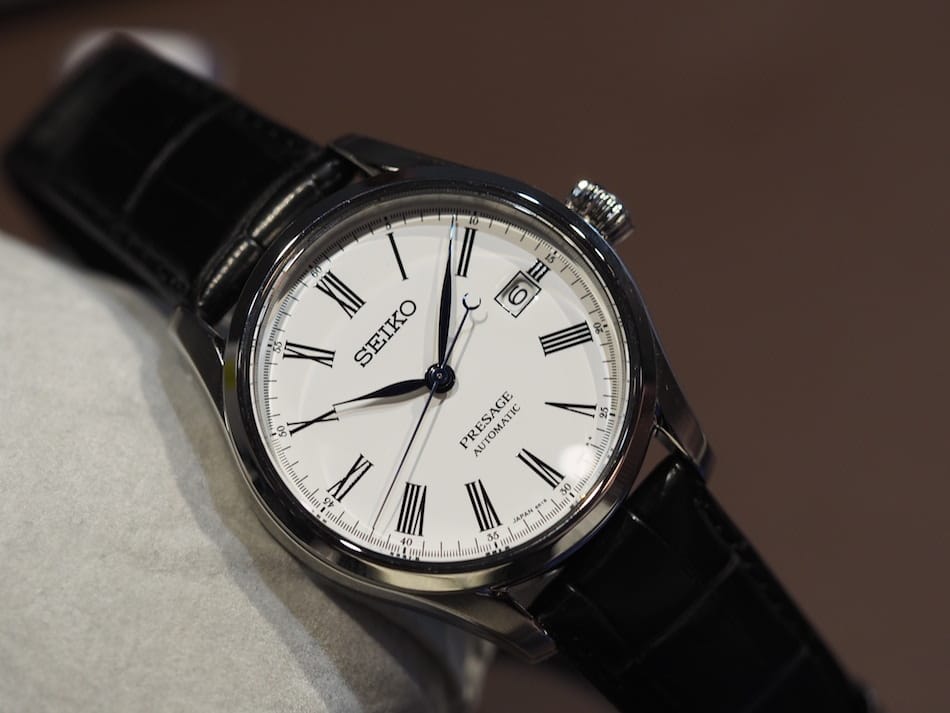 If you head back to Baselworld 2016, Seiko debuted two enamel-dialed 8R45-powered chronographs. Available in either black or white, Seiko made 1000 of each and they quickly became darlings of the show. With their vintage “Laurel” fonts and hands, the watches blended classic style in a modern, fairly durable case. In 2017 in Basel, Seiko followed this up with a 3-hand automatic Presage with white enamel dial. Now, the theme continues with the introduction of the Seiko Presage Blue Enamel Limited Edition. 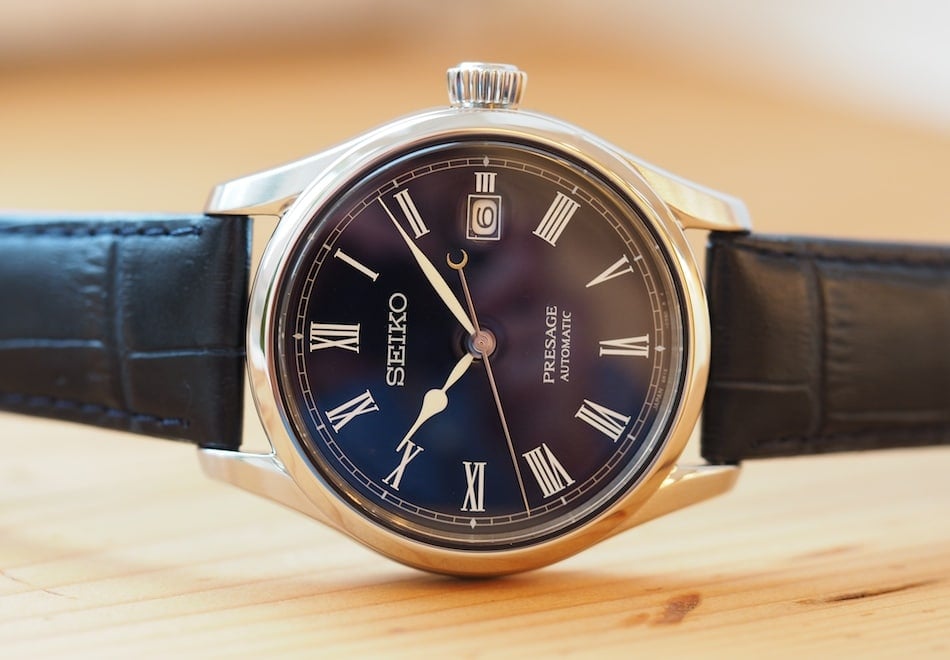 With a reference number of SPB069, the Seiko Presage Blue Enamel Limited Edition comes to us with a dark navy dial. Cased at 40.5mm in diameter, in stainless steel only, and with a thickness of 12.4mm including its sapphire crystal, the Presage is highly wearable. Adding to this, the watch comes on a blue crocodile strap with a stainless deployant buckle. 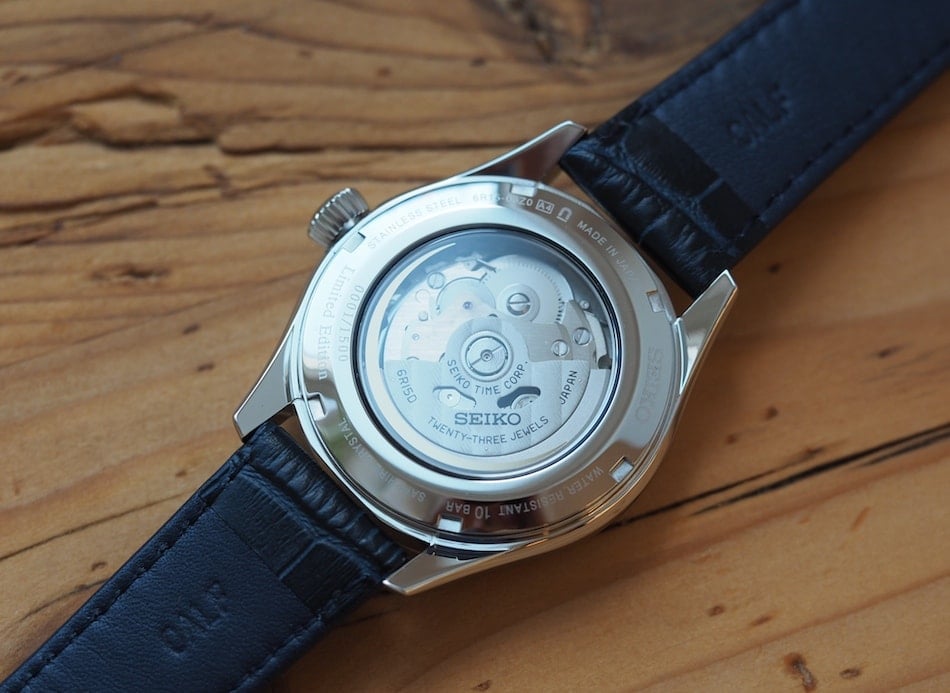 Inside, and viewed through the case back, the 23-jeweled 6R15 automatic with date function sees service. If the watch becomes a pure Monday-Friday watch, it will make it through the weekend on the end table with its 50-hour power reserve. Only 1,500 pieces of the new Presage will be made and the price is a highly competitive 1,100 Euros in Germany. 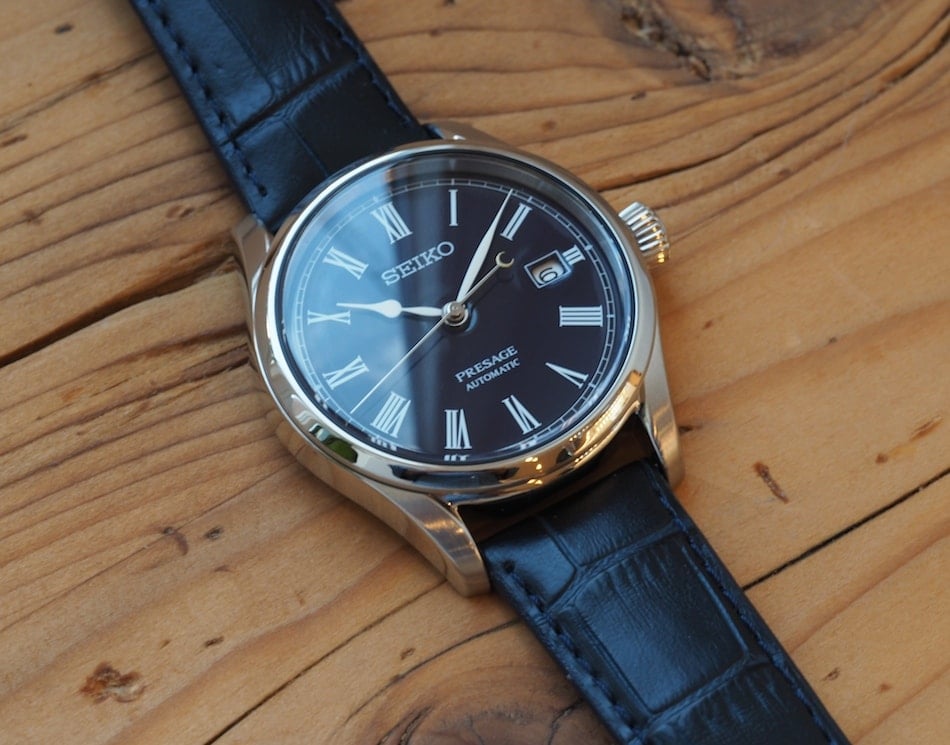 Personally speaking, I’m a fan of the enamel pieces that Seiko is now releasing. The Presage line, overall, is known for offering desirable features and high quality finishing in affordable and attractive packages. With models like the “Cocktail Time”, I think Seiko is doing well with these dressier watches indeed. Add in a detail like enamel and I think you also get something very unique and competitive. With the Seiko Presage Blue Enamel Limited Edition we also get a color that I wasn’t expecting. 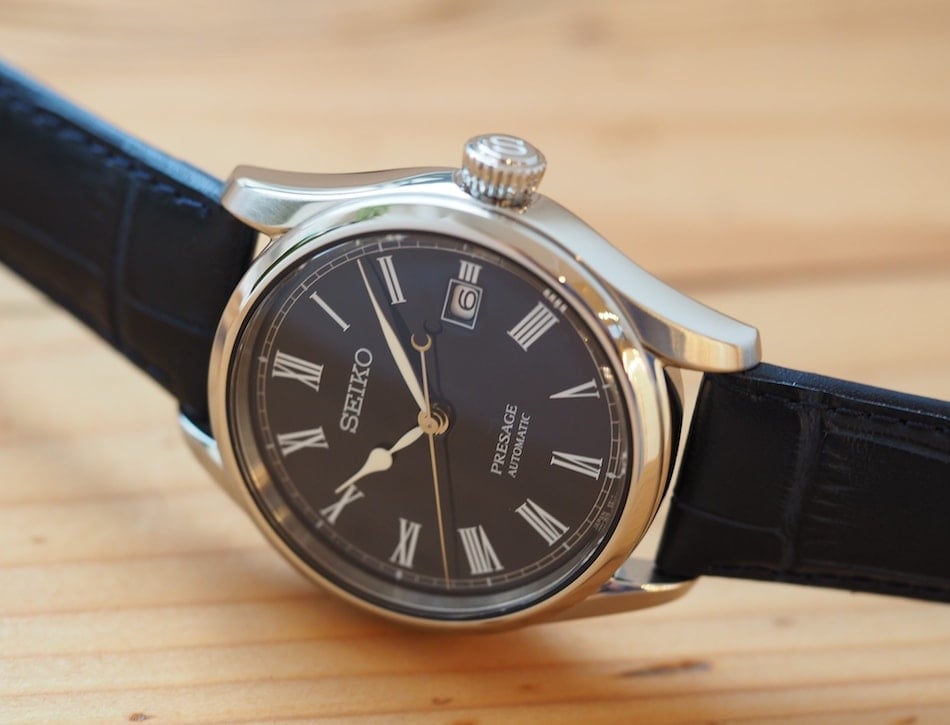 I suppose I was expecting a black enamel dial from the brand, but with the Seiko Presage Blue Enamel Limited Edition we get a watch that, frankly, capitalizes on the trend for this dial color. And…I like it. Seiko explains the inspiration for the color in the Autumn Moon, which was highly celebrated during the Heian Period of 794-1185. We get to see the crescent moon in gold at the end of the sweep seconds hand as well – the only nod to color.  Getting to spend some time with this watch in the more natural window lighting at the boutique was a nice way to really look at the surface of the dial. When viewed at just the right angle, the otherwise semi-shiny dial takes on a slightly matte finish. Plus, you can see how the dial surface forms around the date window. The window itself contains a printed white rectangle that lies on top of the softly downward curving aperture. It’s all wonderfully “imperfect” and suggests a real handmade finish – and it is handmade, by the way. While I do enjoy an Arabic numeral dial more than a Roman version, we get the latter. Printed in white and matched to the white Laurel hands, it’s a high contrast look that stands out simply and boldly. Again, I like it. 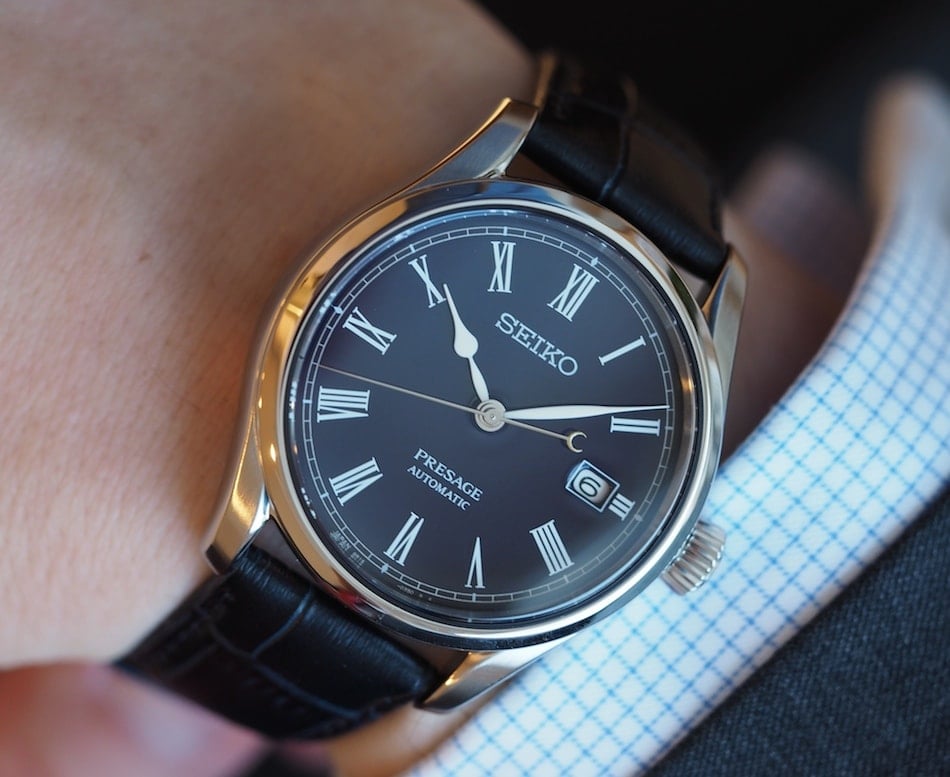 One concern I had with the aforementioned Presage enamel chronographs was their thickness. The 8R45 is not a svelte movement and, therefore, I had some concerns about the new Seiko Presage Blue Enamel Limited Edition. 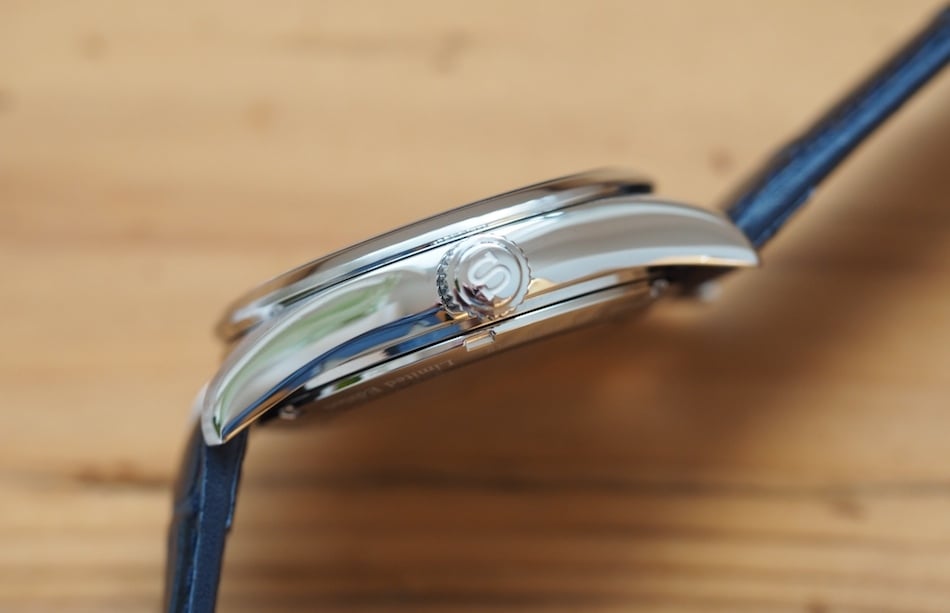 At 12.4mm thick, this isn’t a slim dressy watch, but it isn’t overly thick either. It probably meets the needs for most people who are looking for something that can be dressed up or down and act as an “only watch” if that’s such a thing. I can only imagine it on a brown strap of some sort and I think it would look fantastic. 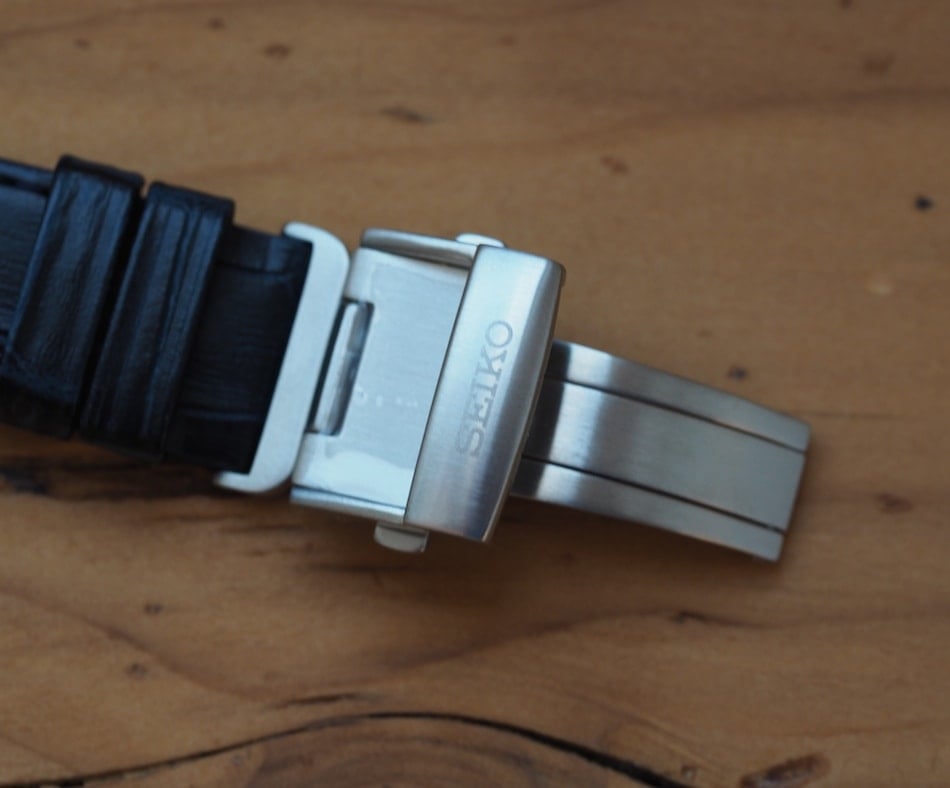 Regarding the deployant buckle, I’m a bit ambivalent. For someone who’s small wristed like myself, this closure represents a long and bulky chunk of metal that ends up running the length of my wrist. For certain, I’d be just as happy with nicely finished pin buckle, but I suppose the deployant is seen as value add for most. 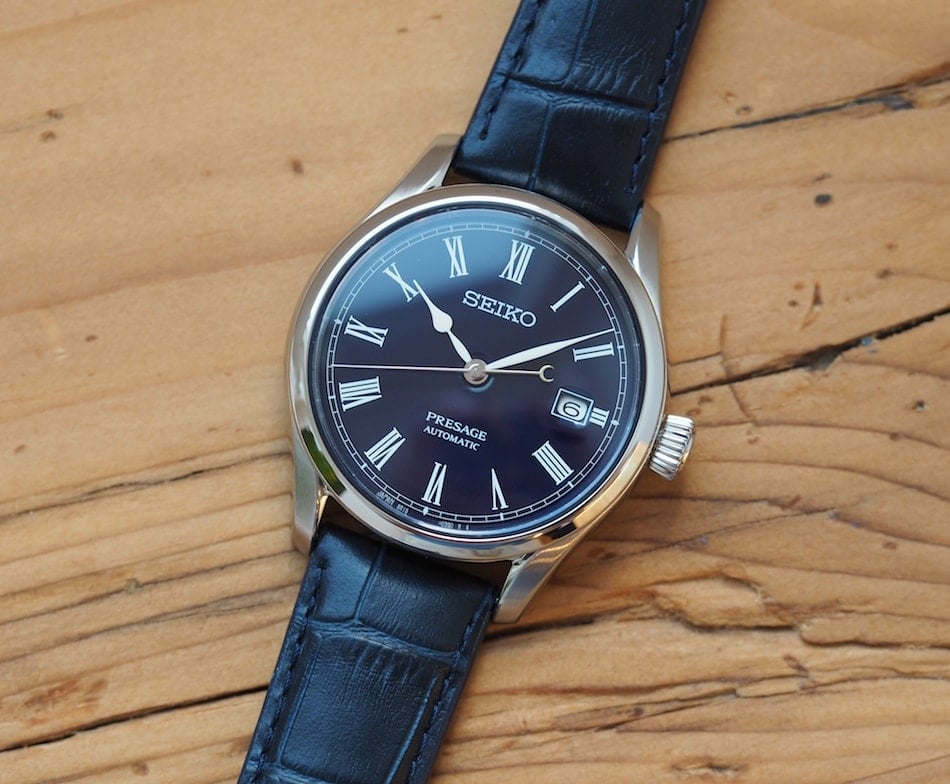 With only 1,500 pieces and a price of 1,100 Euros, something tells me that the release of the new Seiko Presage Blue Enamel Limited Edition was timed perfectly for the holidays. This price represents a real “sweet spot” for a gift from a loved one and probably answers the question for many who say they’re looking for a great every day watch that’s a bit different from the oft-seen Longines. Yes, there was a lot of time between my first viewing of this watch and the debut, but I’d say it was worth the wait.