Earlier this year, and we reported a few times about it, Seiko introduced the new SLA017 (SBDX019 for some markets). When I was in Japan about a month ago, doing a week long Grand Seiko manufactory tour with some of our readers, I had the chance to handle both the new Seiko SLA017 and the vintage Seiko 62MAS reference 6217-8001. Both watches belong to the same person, who is an avid reader of Fratello and a fan of (Grand) Seiko watches. 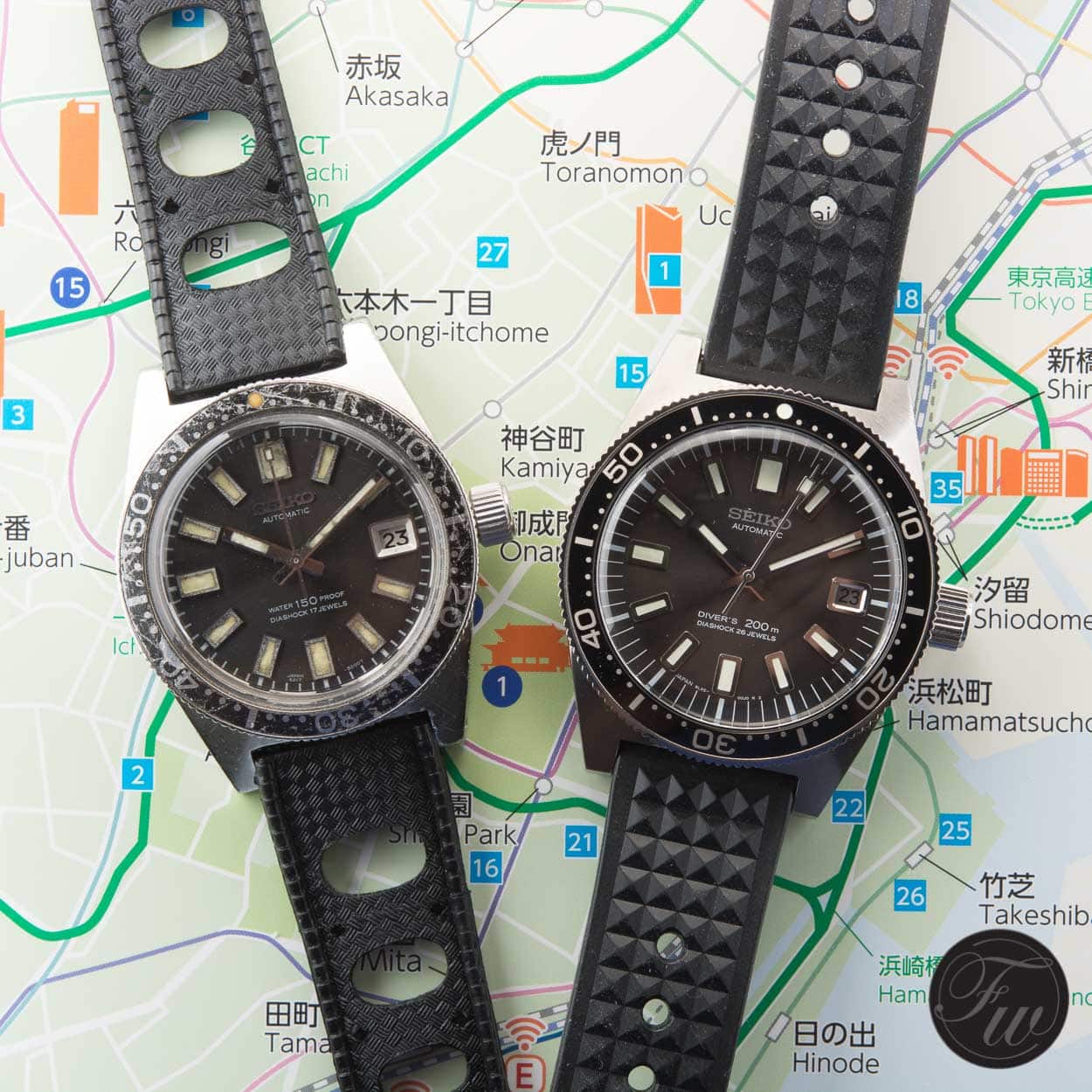 We did an in-depth coverage on the Seiko 62MAS in 2015 already (go here), so I won’t repeat much of what has been written there. In short, the 62MAS was introduced in 1965 by Seiko and MAS stands for ‘autoMAtic Selfdater’. This watch has a water resistance of 150 meters, the first Seiko that could handle over 50 meters / 5ATM of pressure (by specifications). This 37mm stainless steel was had the Seiko caliber 6217 movement (the first digits in the Seiko reference also indicate the movement caliber), one that did not have a hack-feature but did come with the date function. A pretty neat watch, up to the task (diving bezel) and until recently, you could find and pick one up rather easily. Prices are all over the place though, ranging from a good 2000 Euro till almost 4000 Euro for one in very good condition. The problem is finding one, no matter which of the two versions. 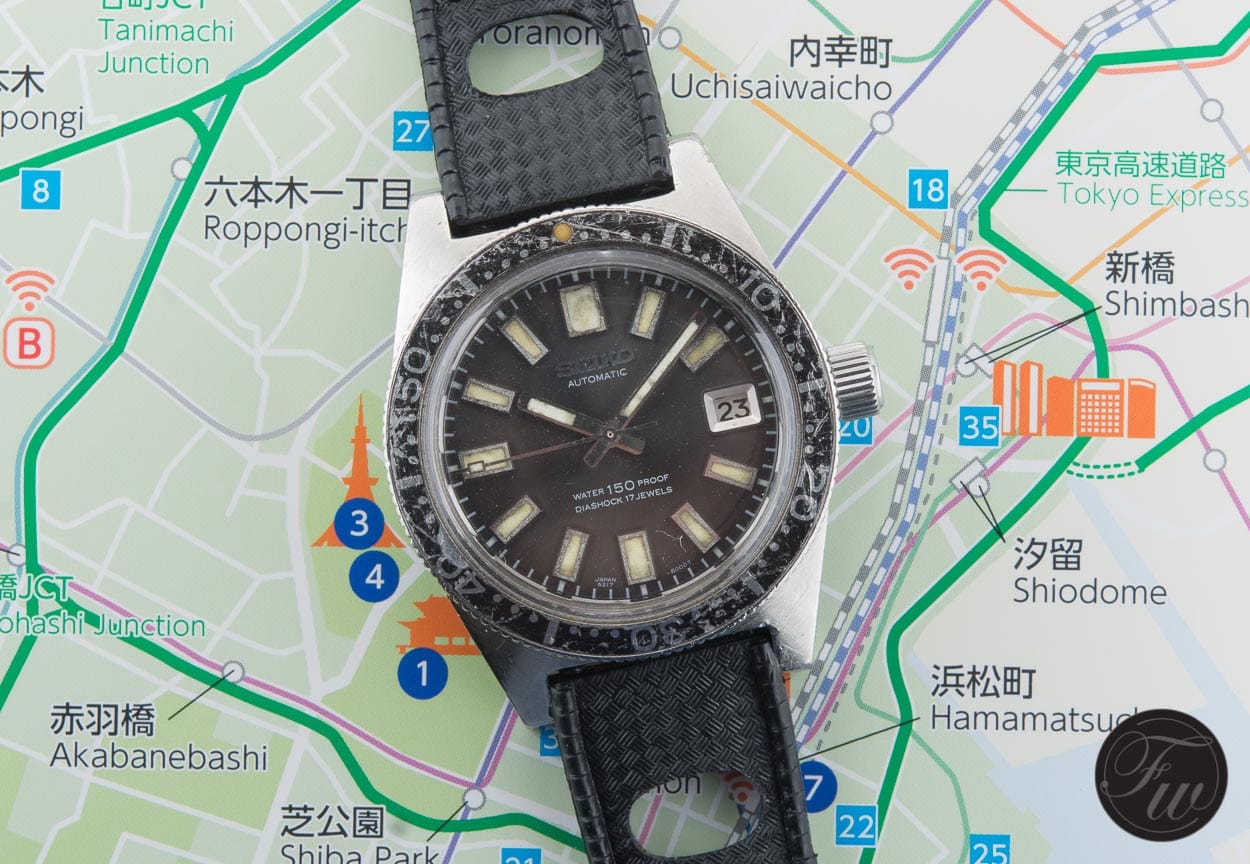 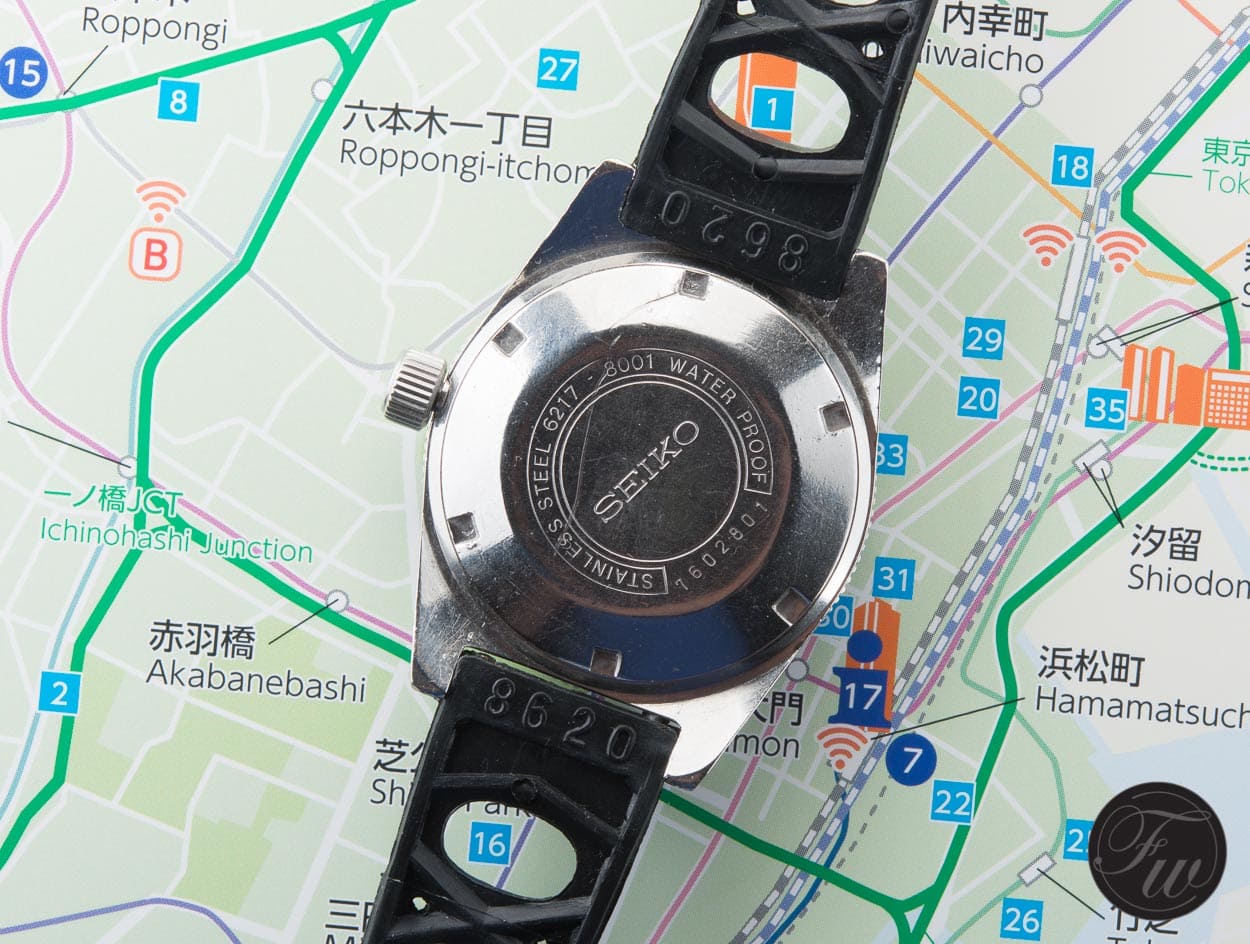 Then, earlier in 2017, the news ‘leaked’ some months before BaselWorld started that there would be a re-edition of the Seiko 62MAS. We called it the SBDX019 only for our local Seiko distributor to let us know that this wasn’t the correct reference number. Later, it seemed that SBDX019 was correct, but is only used for the Japan Domestic Model (JDM). In other countries, the re-edition of the Seiko 62MAS is known as the reference SLA017. 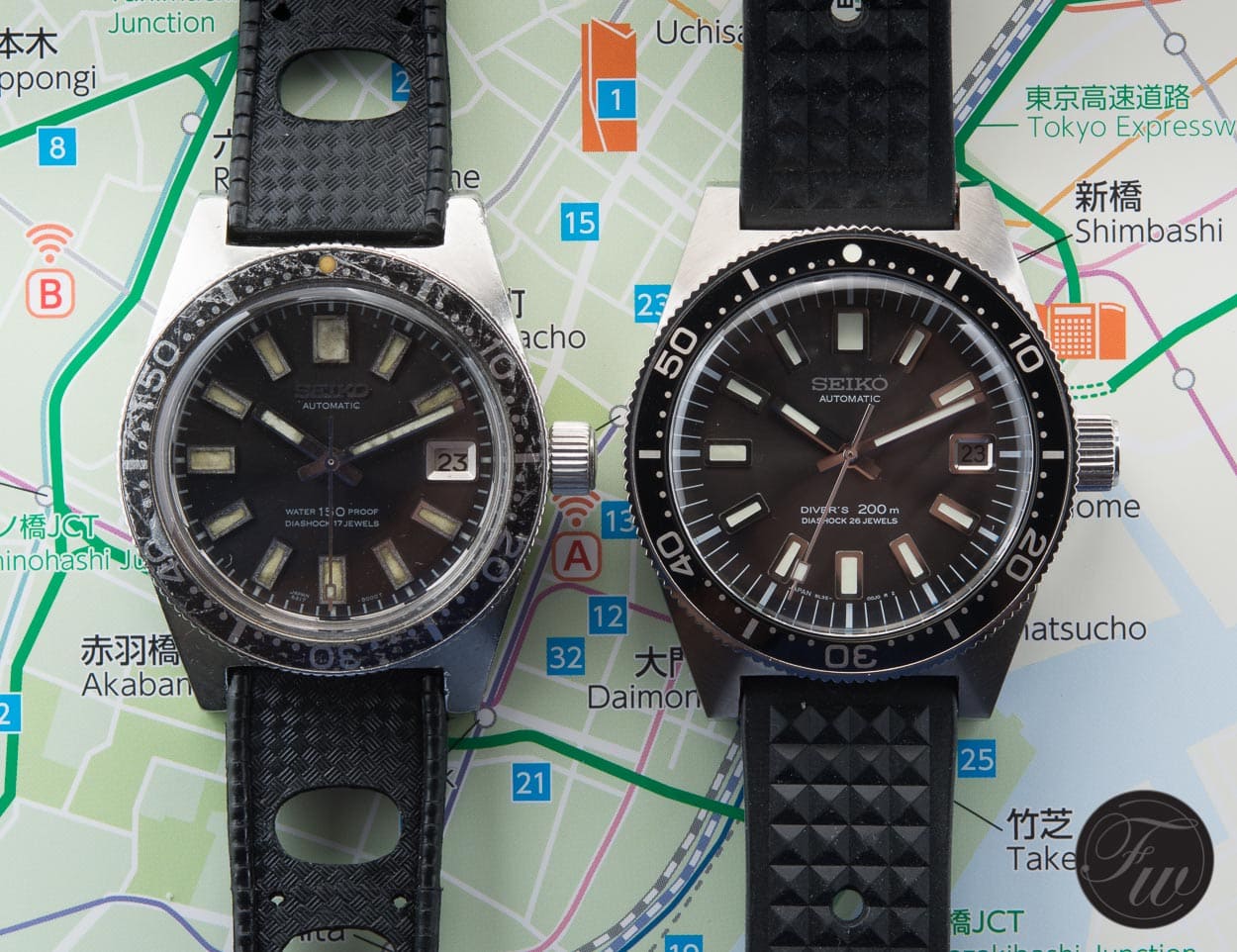 When I first saw it in Basel, I was quite smitten by it. The looks were very similar to the original Seiko 62MAS, and it used up-to-date technology (Seiko Caliber 8L35B movement for example) and had an increased size of 39.9mm instead of the original 37mm. Where the original Seiko caliber 6217 is a rather simple and especially ‘unfinished’ looking movement, the new 8L35B is a variation on the Grand Seiko 9S55. Perhaps you recall my review of the Marinemaster 300 (SBDX001, now succeeded by the SBDX017), which had the Seiko caliber 8L35 movement. The 8L35B has some innovations, like MEMS technology which has to do with the escapement and it has a nicer aesthetic finish. Stripes that are similar to the Côtes de Genève (but referred to as ‘Tokyo stripes’), but can’t be admired anyway by the lack of a transparent case back. Somehow, Seiko doesn’t mention the 8L35B in their specifications, just 8L35. 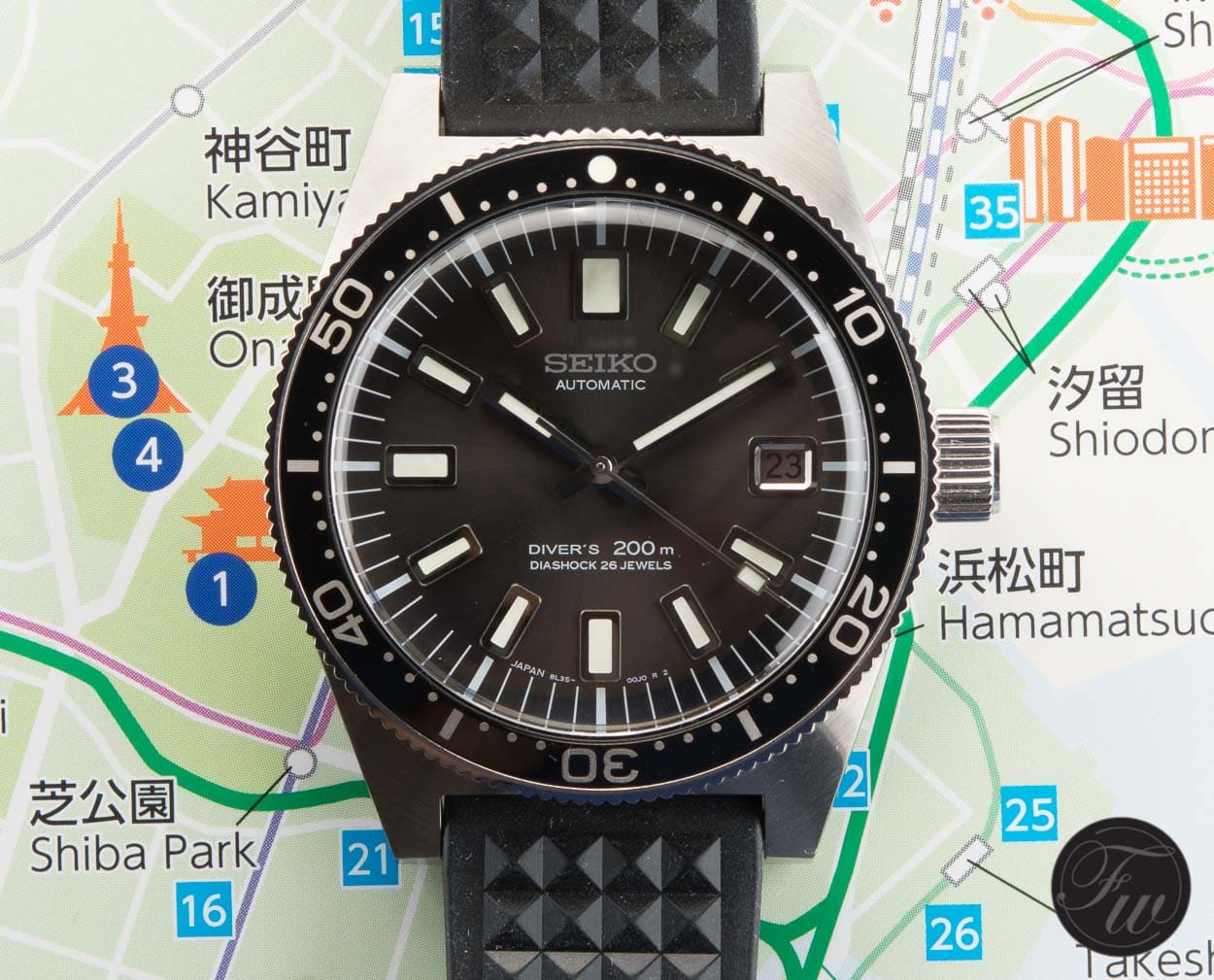 Anyway, the Seiko 62MAS re-edition, the SLA017 / SBDX019 had two minor issues in my opinion. There were just 2000 pieces available world wide, and as with all limited Seiko watches, very hard to get and it had a hefty price tag of 3800 Euro. At the time of introduction, 3800 Euro would basically mean you could buy two of the original Seiko 62MAS models. Not anymore though, unless you’re really lucky. But at the time, just a few months ago, this was still possible. The 3800 Euro was a bit of a blocker for me, as the spec-wise similar (or perhaps technically even more enhanced) Marinemaster 300 SBDX017 had a list price of around 2300 Euro. In retrospect, I should have bought a Seiko 62MAS at that moment (or before) or ordered the new SLA017. The first has become more expensive and the latter has become unavailable. Think for too long and you’re out, I should have known better after missing out on the 2014 limited edition Speedmaster Apollo XI in titanium and Sedna gold. 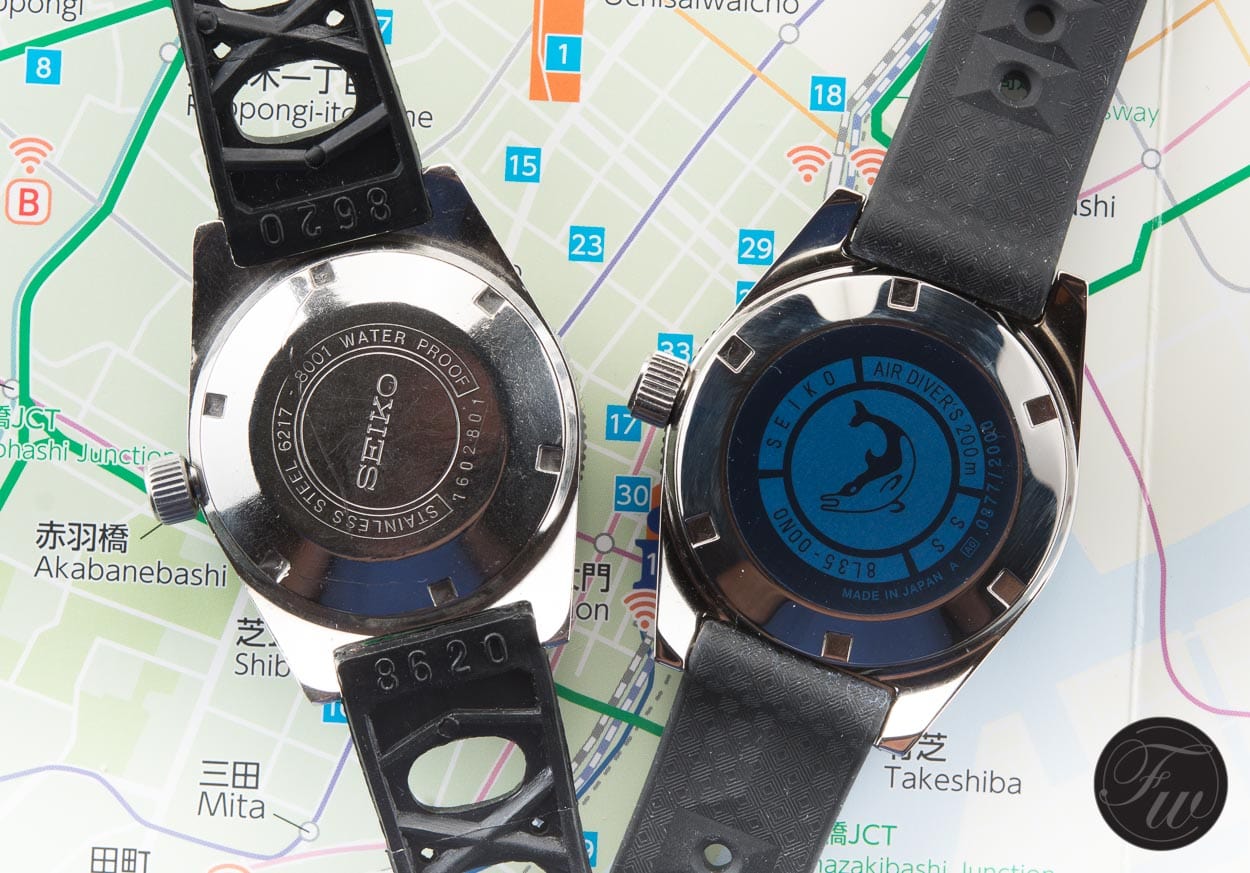 As you can see in the pictures in this article and reading through the text, these watches show quite some differences. The diameter of the Seiko SLA017 is different from the Seiko 62MAS already, so it does look and feel like a modern (and thus different) watch to start with. For a re-edition, I don’t care much about the fact that they used a modern movement, a different crown mechanism, or perhaps not even that much about the crystal (sapphire versus acrylic). Seiko also got the color of the SLA017 dial right in my opinion, it has a similar nice tone as the 62MAS. The details on the dial are also corresponding, although the depth rate is different of these two models. The size of the watch clearly indicates that we are dealing with a modern watch here. 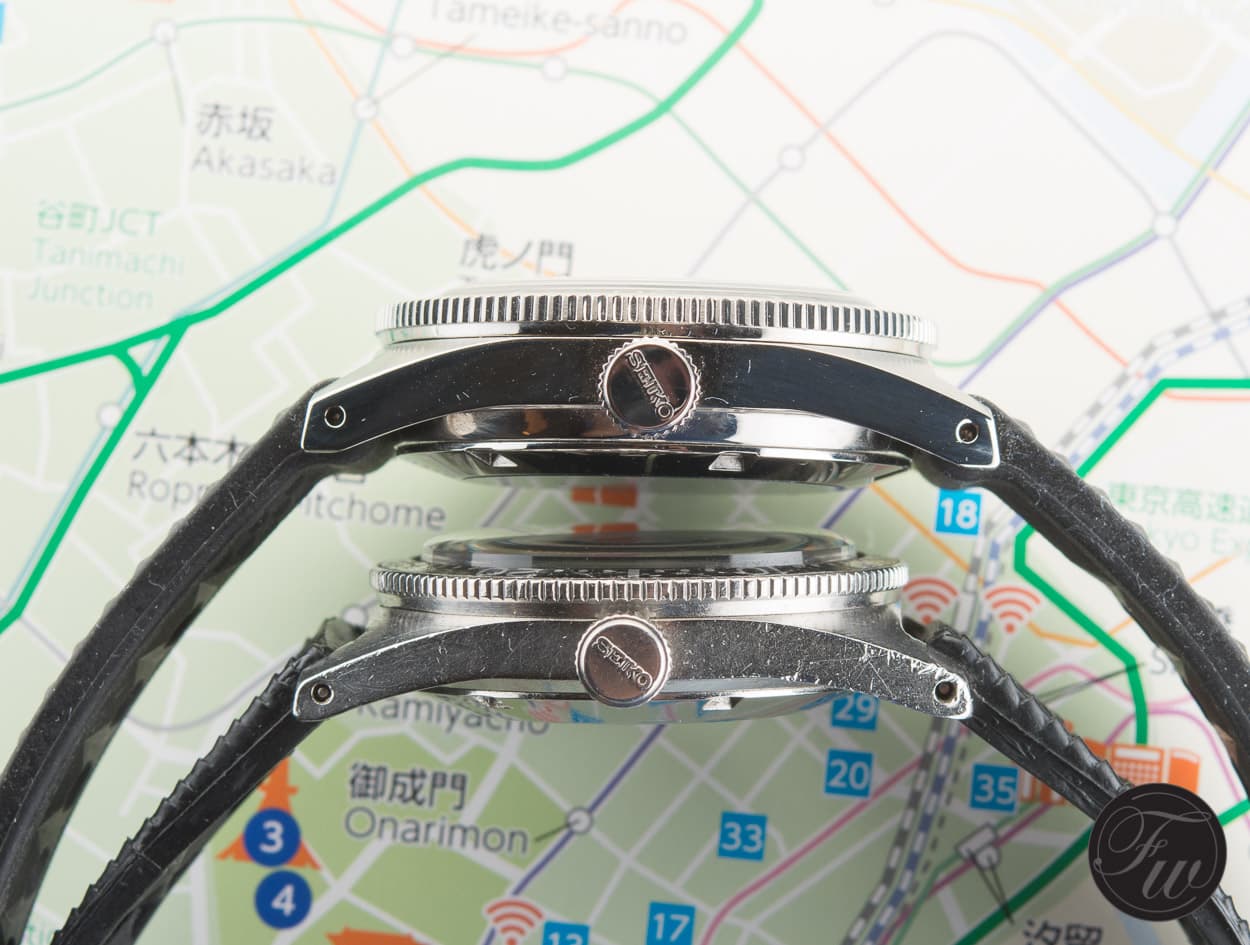 As you can see on the picture above, the shape of the case has been respected. The SLA1017 is a bit thicker than the Seiko 62MAS, which probably has to do with the movement and its water resistance. But the lines of the case and lugs are well respected, so are the bezel and crown for example.

If you can find any of these two, and you will if you are paying premium for the SLA017 (there are a couple on eBay for $5,000USD and more) or have enough patience to wait until you come across a nice Seiko 62MAS, which is the one to have? This is of course very personal and depends totally on the type of guy (or girl) you are. I would tend to go for the vintage model, as I did with the Seiko (Grandfather) Tuna 6159-7010. I was on the hunt for a nice modern Tuna SBDX011 at the time, but I decided to go vintage instead and never looked back. One of the reasons was that I knew it was not going to be a daily watch, or even a watch I would wear often, anyway. So no fear for damage or real wear and tear. In the case of the Seiko 62MAS or SLA017, the size can also play a role where-as this was not for the Tuna (similarly over-sized).

Finding a nice and good condition Seiko 62MAS will be tough, but can also be part of the fun. Make sure you that if you found one, it has been serviced or that you have a watchmaker that is able to service these watches. It wouldn’t be the first time that our own watchmaker Paul opens a Seiko that has not been serviced for decades, showing a lot of worn out parts (and for which spare parts are quite difficult to source). That’s something that is not going to happen to you with a fresh and well-over-retail-paid-for Seiko SLA017.

More about the Seiko SLA017 via Seiko on-line.

*The Seiko SLA017 / SBDX019 is part of the Prospex (‘Professional Specification’) collection, suitable for professional use (diving).

A big thank you to Patrick to lend me these two watches.