Since 1985, Seiko is the official timer of the International Association of Athletics Federations, or IAAF in short. This year, Seiko invited us to come to the IAAF World Championships in London and – amongst others – have a look at the actual timing equipment and activities during the event. I have to admit that mostly watch European and World Championship soccer games, like most Europeans, a bit of Olympic Games and on January 1st I traditionally watch the ski jumping competition in Garmisch Partenkirchen. Mostly on television, and only rarely I actually go to a stadium to watch sports. Only last year I visited athletic games for the first time, in Amsterdam. Never been there before, so I was amazed to see that a lot of the disciplines are being performed at the same time. This means that a lot is happening on the field and track while you are there. 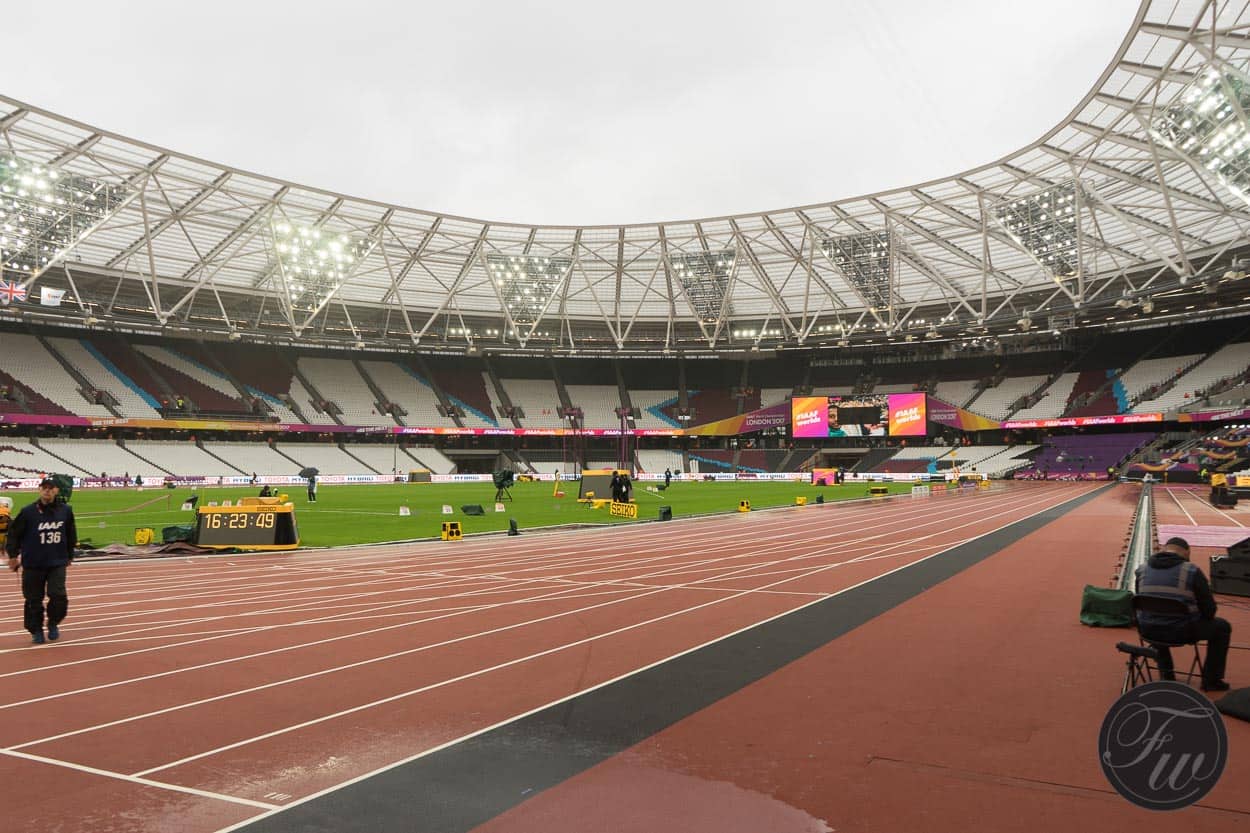 London weather unfortunately, but you can see that the field has a lot of yellow Seiko equipment.

Besides that, there’s an entire different world going on behind the scenes during these games. Of course you will see the field event boards, lap counters, LED displays, speakers, photo beam units and starting blocks for example, but most prominently – if you’re watch TV – you will see the SEIKO logo on your screen whenever times and scores are displayed. 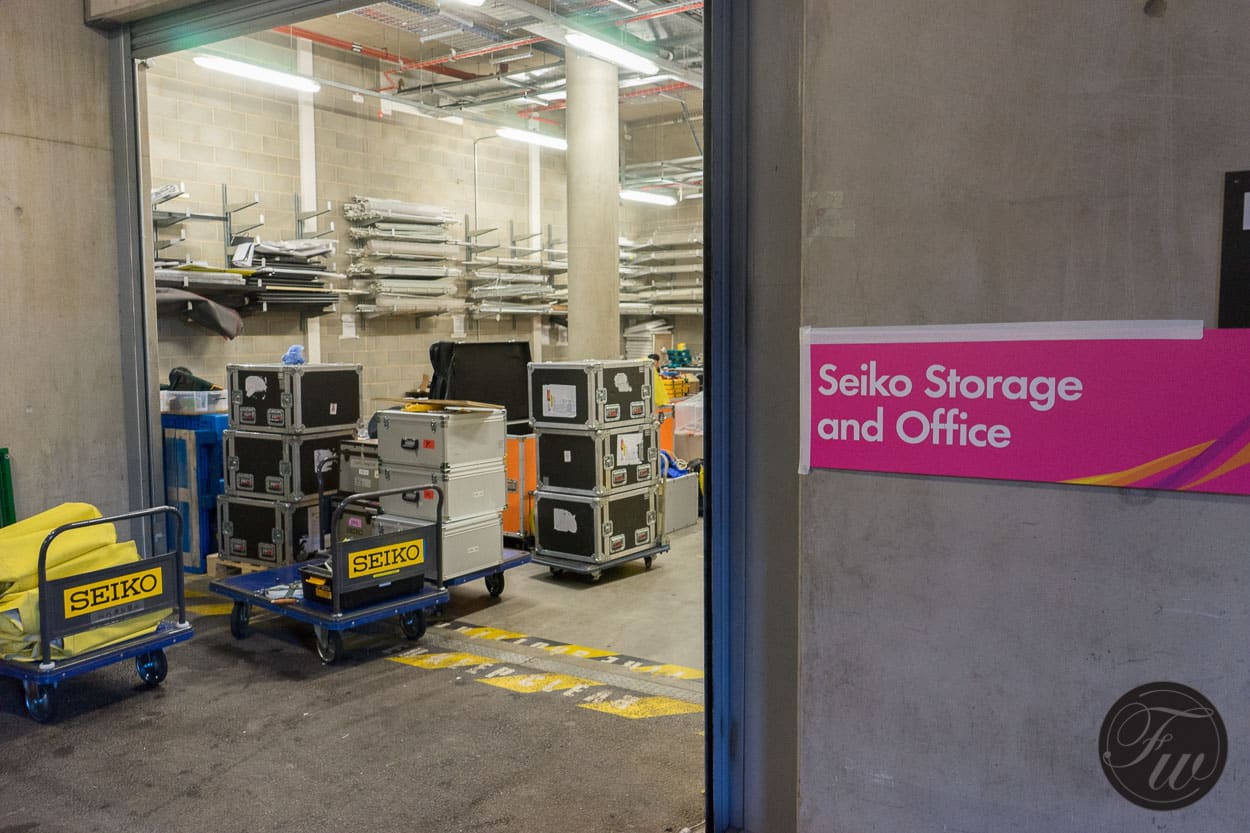 Seiko Timing has a separate room in the stadium where their equipment is being unpacked and installed.

Eight containers of Seiko timing equipment traveled to the IAAF World Championships. Besides that, there are approximately 60 staff members from Seiko occupied with timing events and making sure everything works in the best way possible.

Already since 1964 (Seiko times the Olympic Games that year) Seiko is focused on timing of sports events. Developing and manufacturing equipment especially for sports. Why would Seiko do so? Their contribution to the IAAF World Championships is not paid for, they make a lot of costs to do the timing of the event. For Seiko it is mainly part of pride and contribution to sports. To show they can and to be involved in the world of sports.

Interestingly enough, some times they also benefit from these developments. What to think of the quartz timers they developed for the Olympic Games in 1964. This actually led to the first (Seiko) quartz watch in the world, the Astron. In 1964, Seiko also developed a printing device to have all the times on paper. Seiko called this the Electronic Printer. The next generation of this printer was called the Electronic Printer-son. This eventually led to biggest business of Seiko, the EPSON company. It is about 10x as big as the Seiko Watch Corporation. 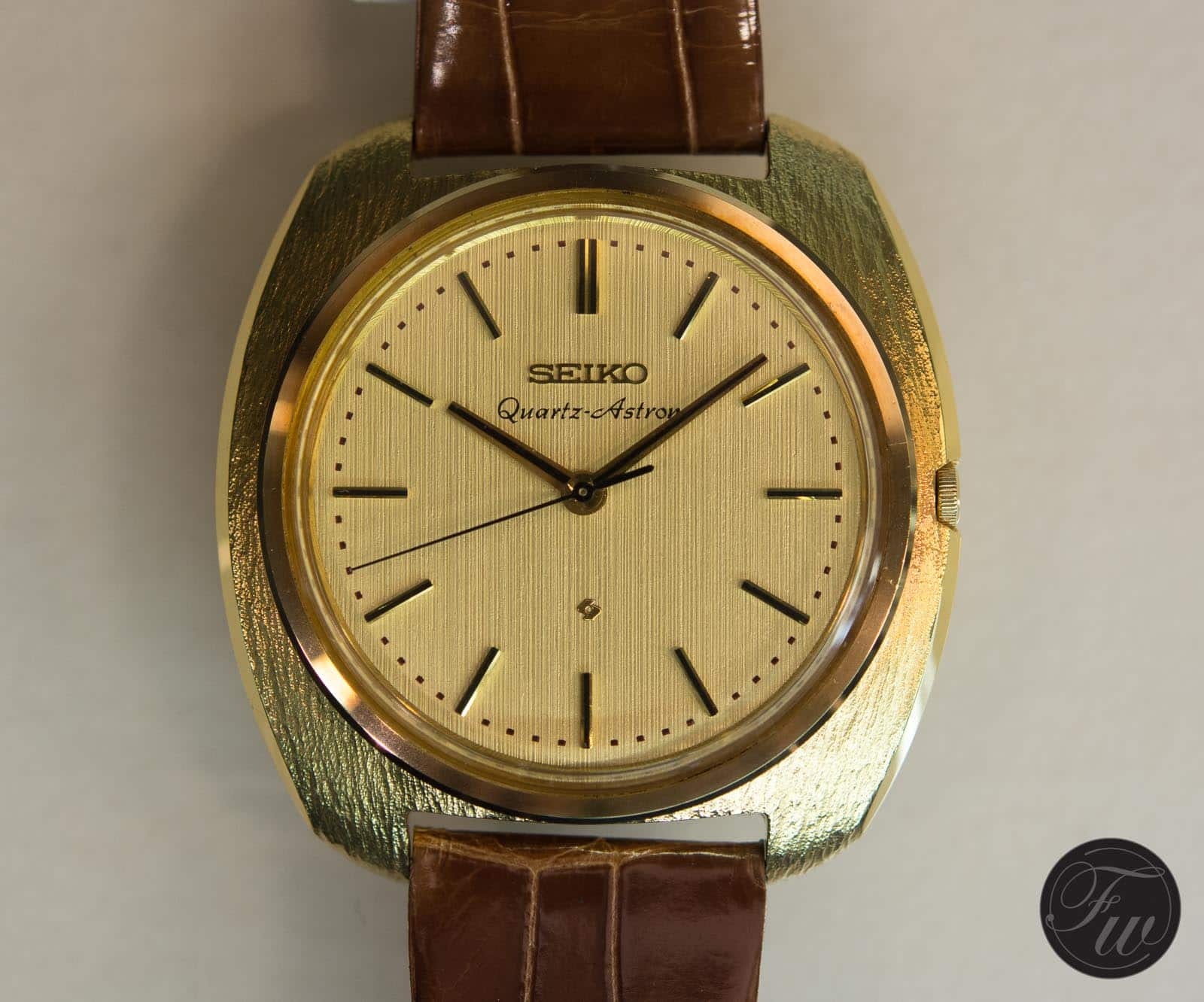 Enough with the history lessons, let’s have a look at some of the equipment that Seiko used during the IAAF World Championships in London.

Let’s start at the track. The starting blocks are an interesting piece of equipment, that do much more than only providing grip for the athletes. They measure the pressure that the athletes put to them, they contain a speaker (each), to ensure that the sound of the start pistol arrives at the very exact time to each of them. They also provide information regarding false start information. 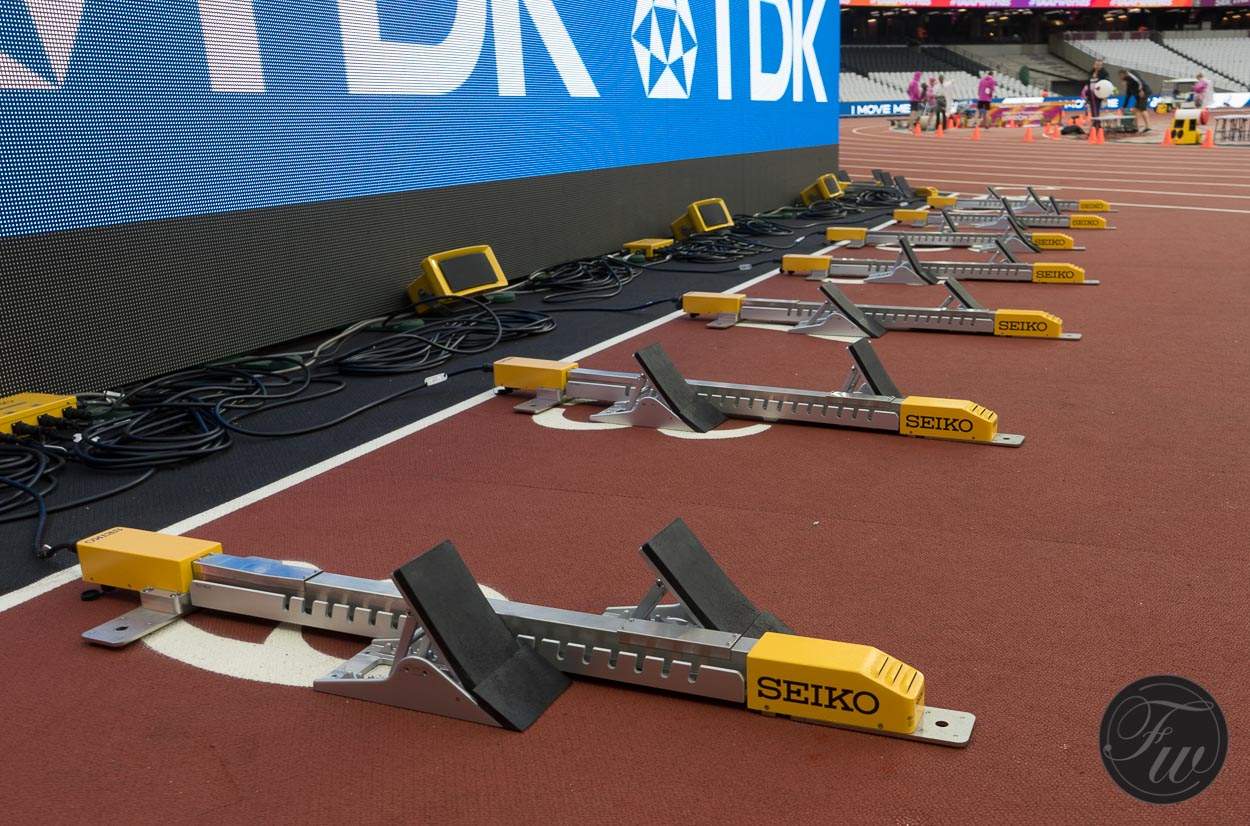 Another interesting piece of equipment has to do with timing the finish. Seiko developed photo finish cameras and equipment to measure and help judges to do their job. Below, you see the finish line where athletes are being photographed by the Seiko Photo Finish System. This system is accurate up to 1/10,000th of a second (while results are only measures till 1/1000th of a second) and takes 2,000 images per second. The information is being sent to a computer and it generates one large images with all the finishing athletes. It might look like a chronological order of finishing, but what it actually does is taking a picture of ‘time’ and not of space. That sounds very conceptual, but the athletes shown on the screen below, are all finishing. An athlete ‘finished’ when he crosses the white line on the track with his upper body.

A judge goes through the images of the Seiko Photo finish quickly and determines who has won. They have images from multiple angles, in case someone else’s (bodypart) is blocking the view. 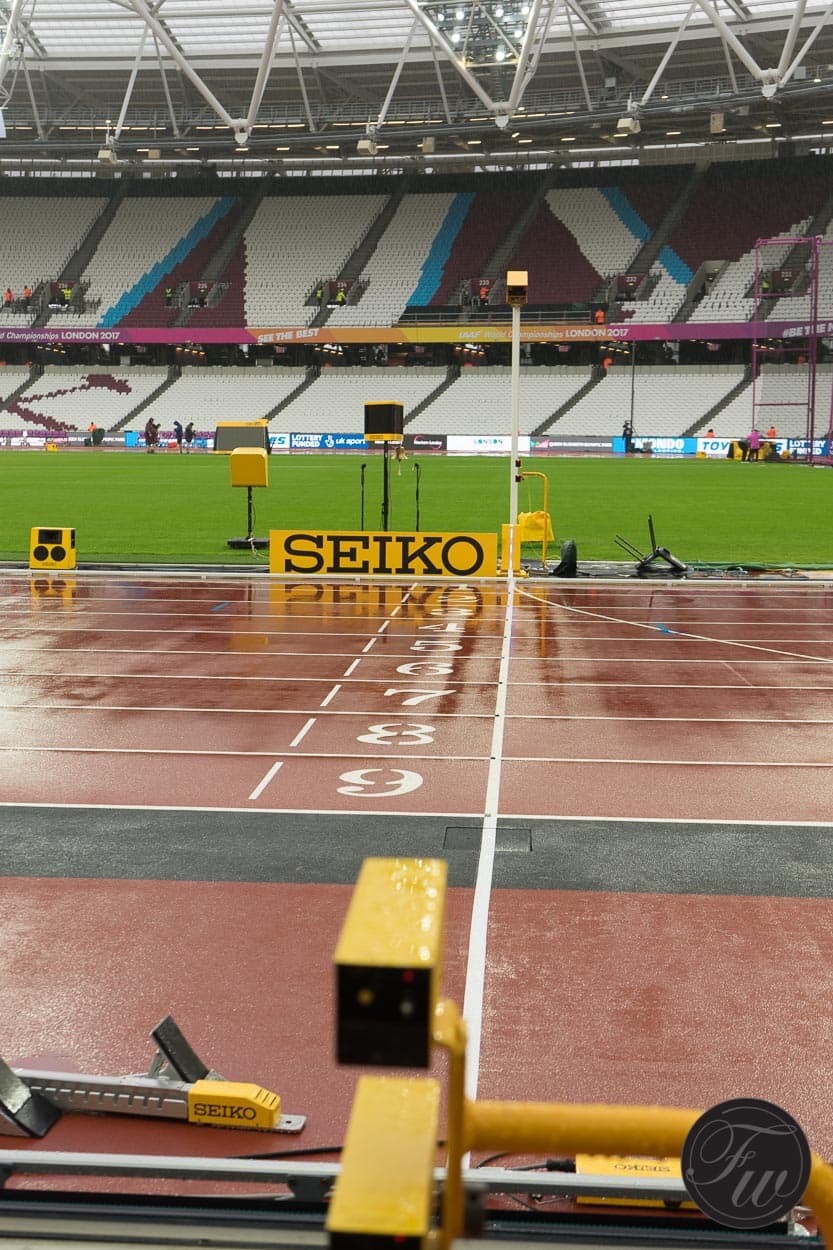 For race walking (outside the stadium for example), Seiko developed lightweight transponders that are attached to the front bibs and shoes for example. Then there is a wing gauge system on the field inside the stadium, that measures the wind speed (and takes this into account for the final result times). All this information, including that of the start and finish for example, are being transmitted to a centralized Seiko Control Center where all data is being collected and analyzed. There’s still even a Seiko printer to keep the results on paper (you never know). All information that is being collected and judged, is being transmitted to the LED displays in the stadium (and outside the stadium in case of race walking for example). All these lap counters, countdown clocks and display boards uses LED technology. I was amazed how bright and sharp these big triangle shaped displays were, even from a far distance. In London, they had three of them on the field (costing $500,000USD each). From the Seiko Control Center (located in the mid-center of the stadium, all the way up to the highest level) information is being transmitted to all devices, television and the internet.

Then I didn’t even mention a lot of the other equipment, for measuring distance of objects, jumping and so on. There’s more to this than I would have imagined, including a complete data room on location. Seiko is big in sport timing, and they take a lot of pride for doing this. The bright yellow color of the Seiko equipment was introduced in 1992 (before that it was blue and white). This yellow color you can also find in some of their clocks that represent the official sports timing clocks. 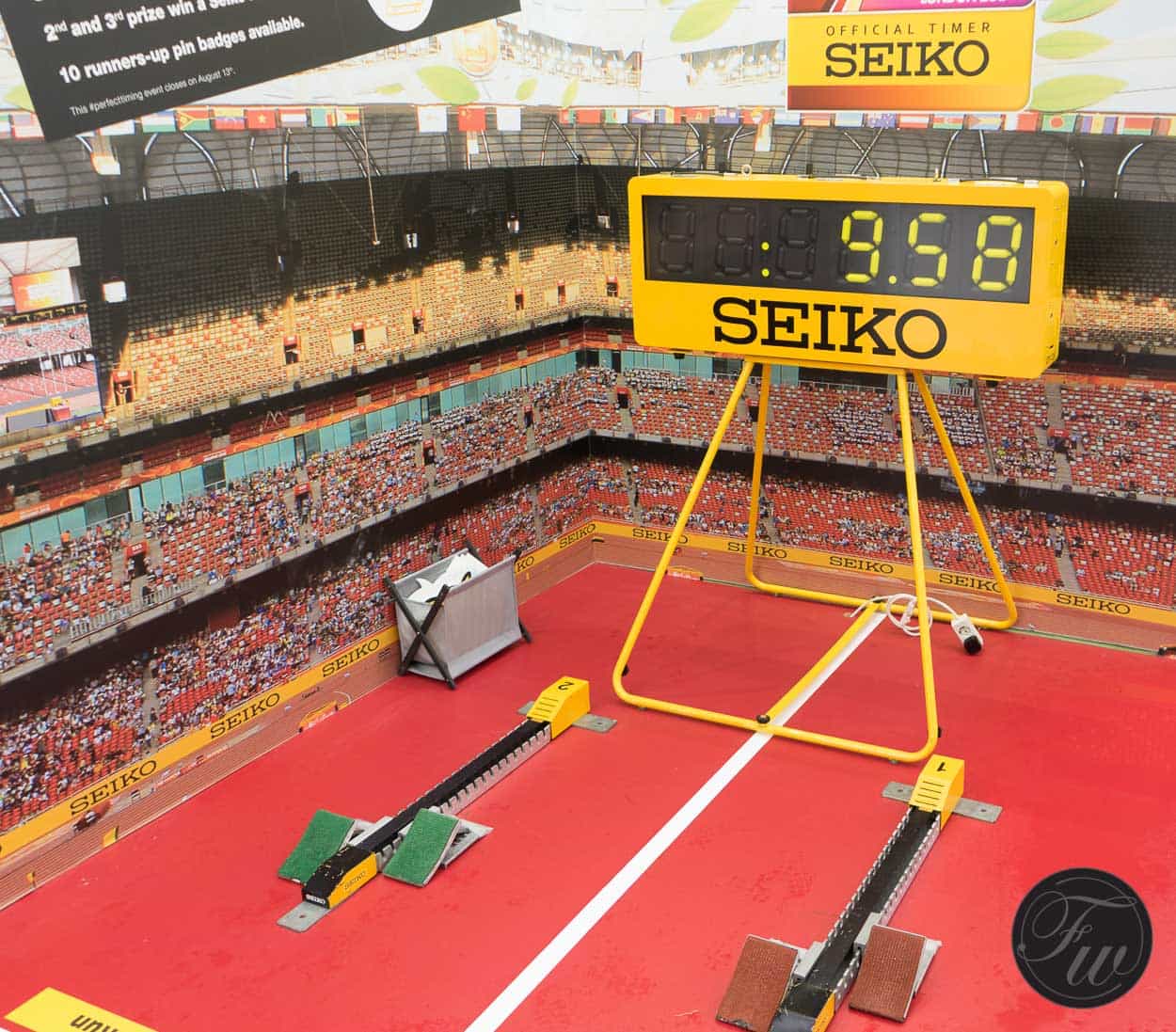 In the same week, Seiko opened a (huge) flagship boutique in London. A huge boutique, with pieces from the Seiko Presage, Prospex and other collections as well as the Grand Seiko and Credor high-end timepieces.  The boutique is located at 57 Brompton Rd, Knightsbridge, London. I was there to witness the opening, done by Mr Shuji Takahashi, President & COO & CMO Seiko Watch Corporation. 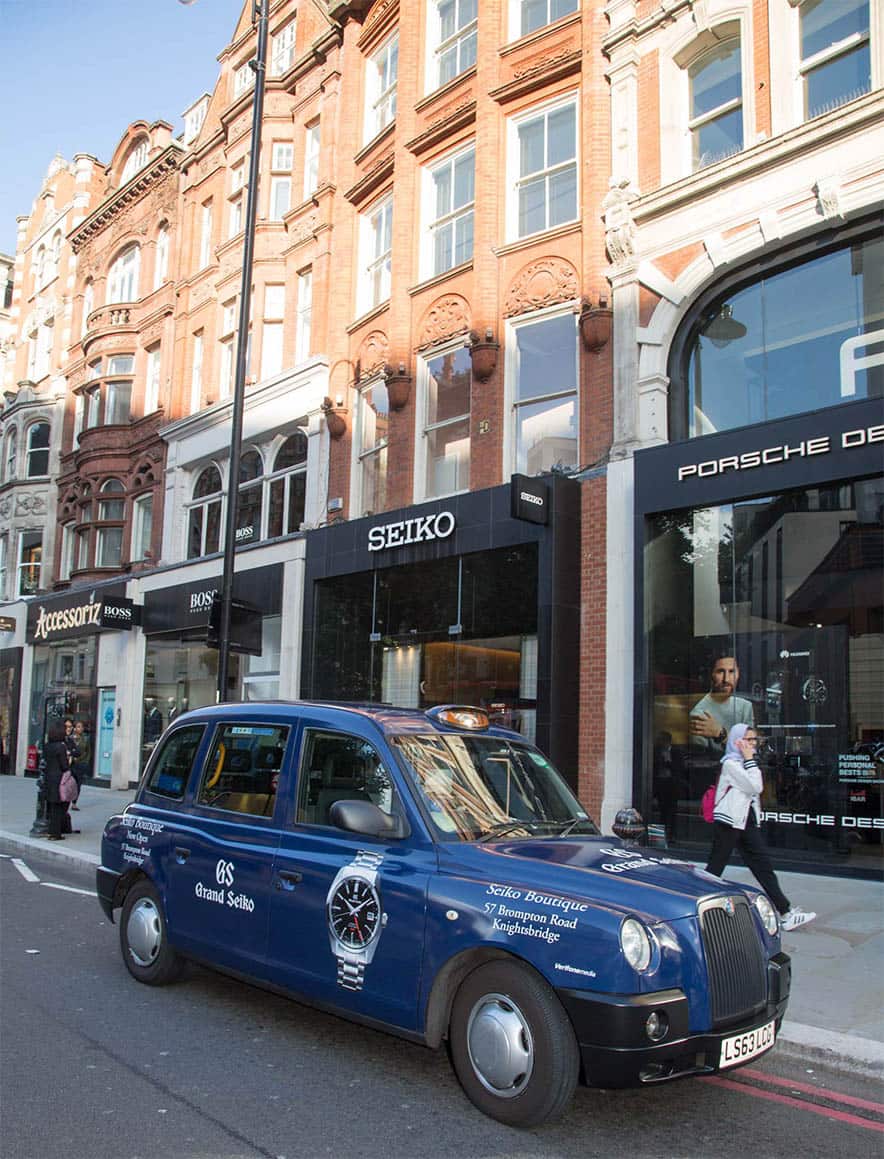 A big thank you to Seiko for inviting us and giving us the opportunity to see what’s going on behind the scenes and for celebrating the opening of the new Seiko boutique in London with them. Thank you.

More information about Seiko can be found on their official website.