One of the most puzzling watches in my collection. I always learn something new about this model as I research it, trying to put all the bits together. Yet the full story remains unclear. Therefore, this article will be slightly different than my other reviews on vintage pieces.

Even after devoting exponentially more time to digging out information on this Seiko 7016 there is still a lot I’m missing. So, I decided to publish the ongoing results of my findings. I hope there are some other collectors that might shed more light on this intriguing model. Feel free to correct or add any information you have on it. 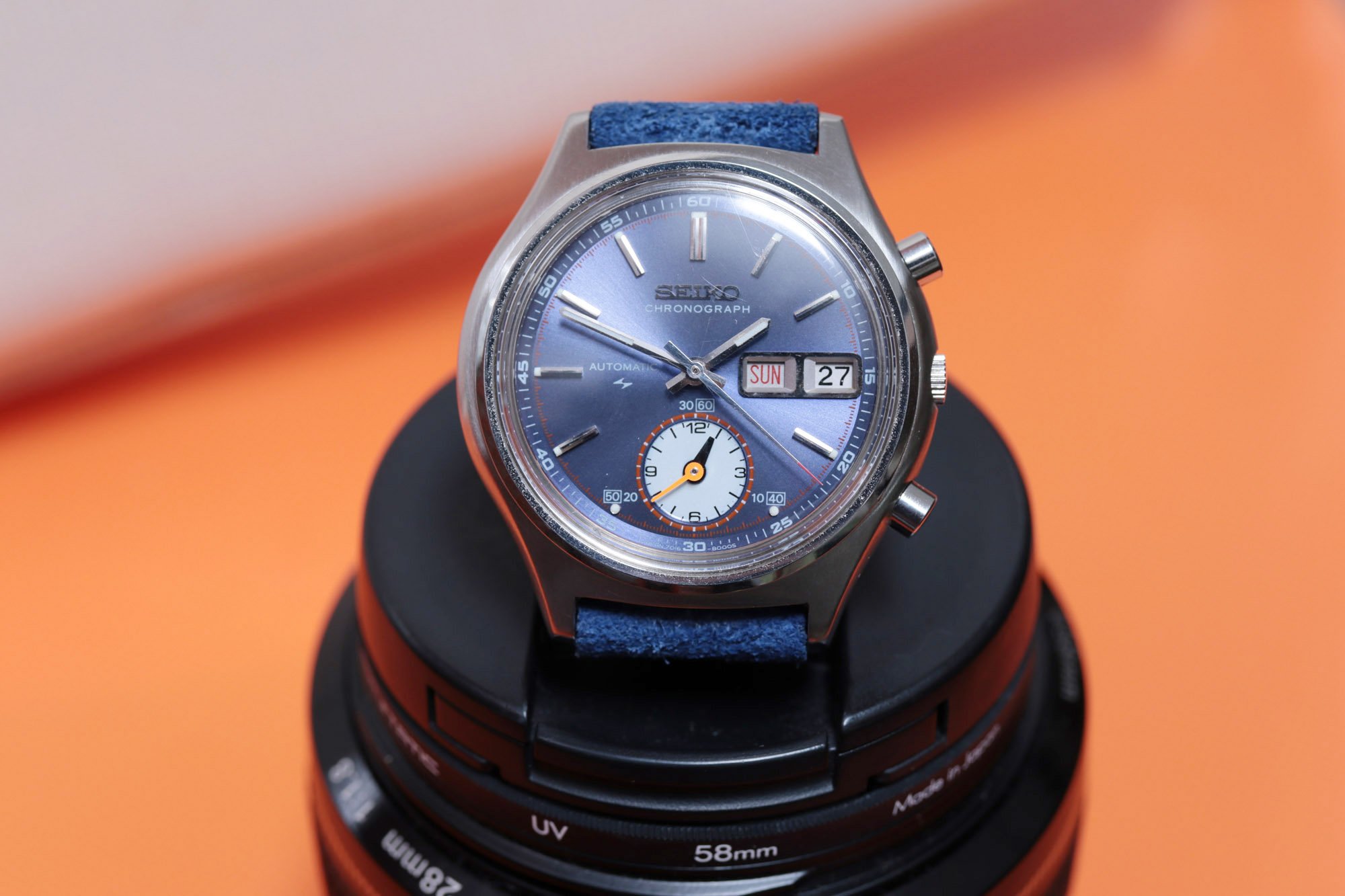 Seiko 7016A in time perspective

Let’s tune in on the historical context first. Seiko introduced first automatics with 6139 caliber in May 1969 (click here for our Seiko 6139 versus Zenith El Primero article). Next caliber 6138 was presented a year after in 1970 with a 12-hour counter on top of a 30 elapsed minutes counter. It was only two years later, in 1972, that Seiko showed the world the 7016A caliber, considered by watchmakers as one of the most technically interesting calibers from Seiko. 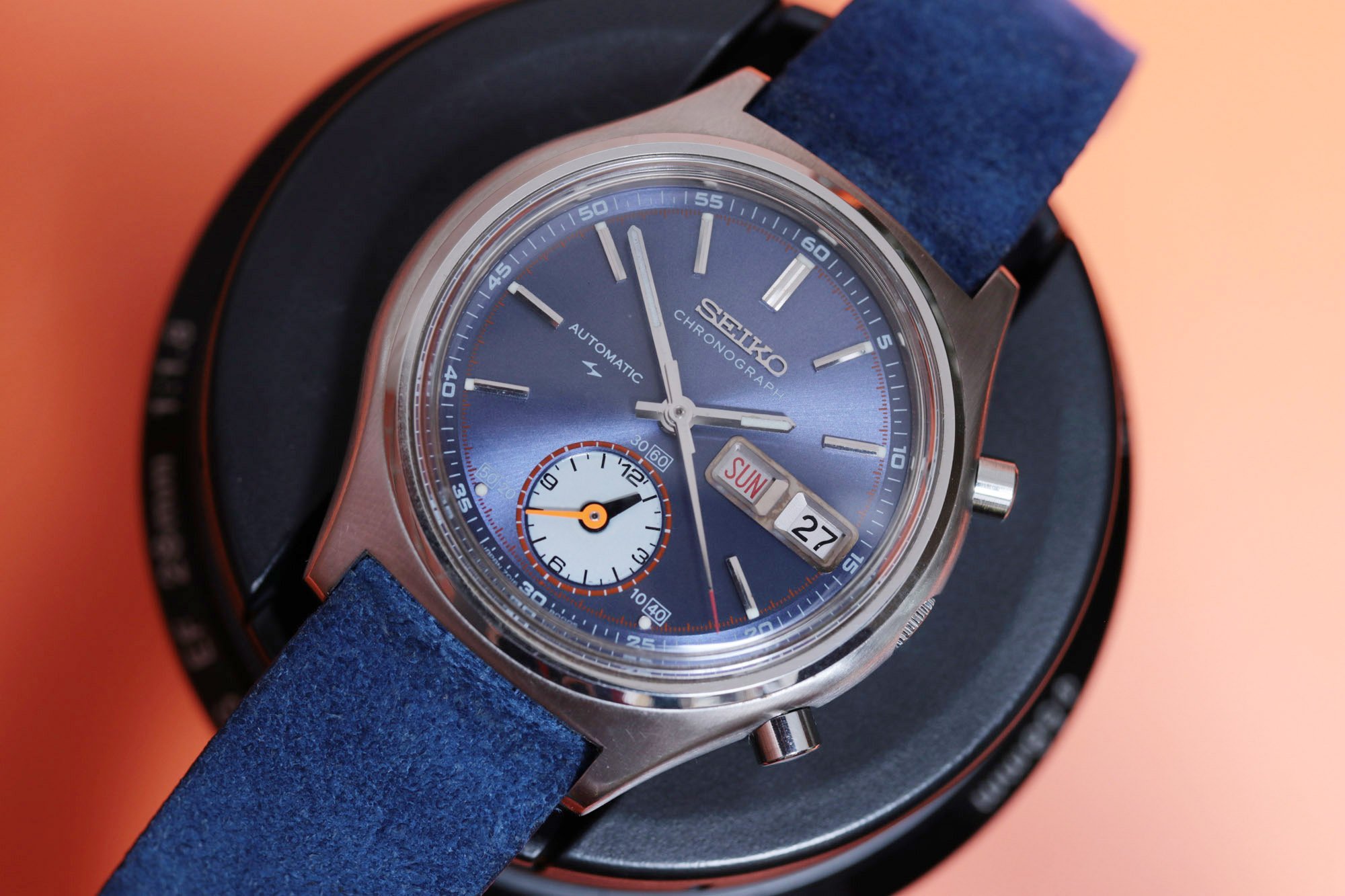 Clear facts about Seiko 7016A

The 7016A combines watchmaking originality and fine engineering from the Daini factory. Not only does it come with a 12-hour recorder but look at the sub-register. It is easy to overlook and mistake it for some simple 30-minutes chronograph. But if you look at sub-dial at the 6 o’clock mark closer, you will see two concentrically rotating hands. The bright orange one counting 30 or 60 elapsed minutes, the black one below counting hours up to 12. Another detail I particularly like is that the sub-register hand doesn’t jump from minute to minute but moves constantly. Another considerable difference from first Seiko 6138/6139. 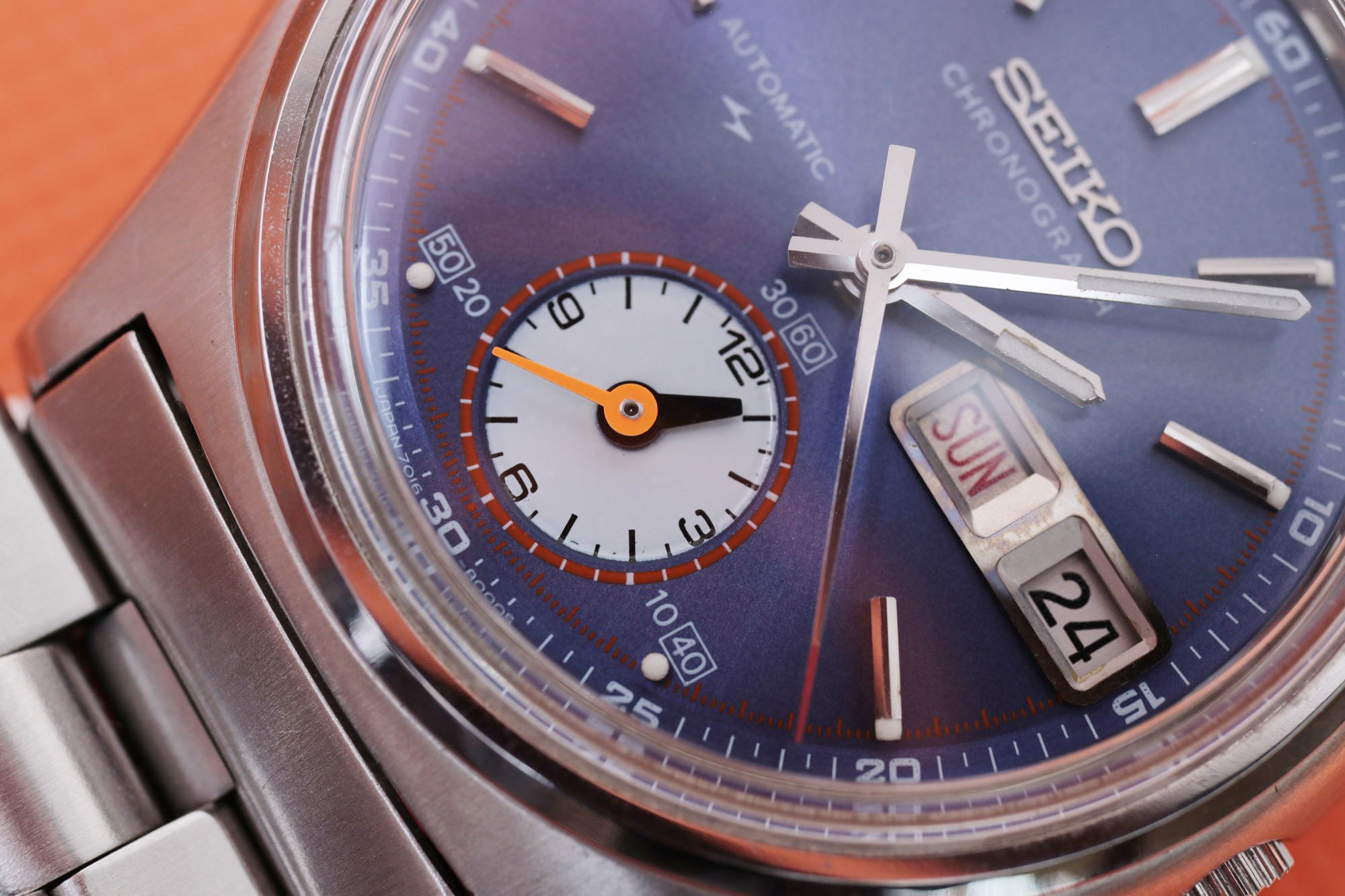 If you start researching the Seiko 7016-8000 you may get a bit confused when you see the sub-dial minute hand not only in orange, but yellow too. When I was hunting down my piece, I saw no other apparent dial difference except this color mix. Everything became clearer when I bought the one with the orange hand. It was only then that I realized it simply changes color in different light conditions. I felt so tricked that I went back and studied all the ref pictures I downloaded over the 4 months before. I would bet real money that all those hands were really yellow. Well, now I assume they were not. One of the most misleading, yet highly believable optical metamorphoses. 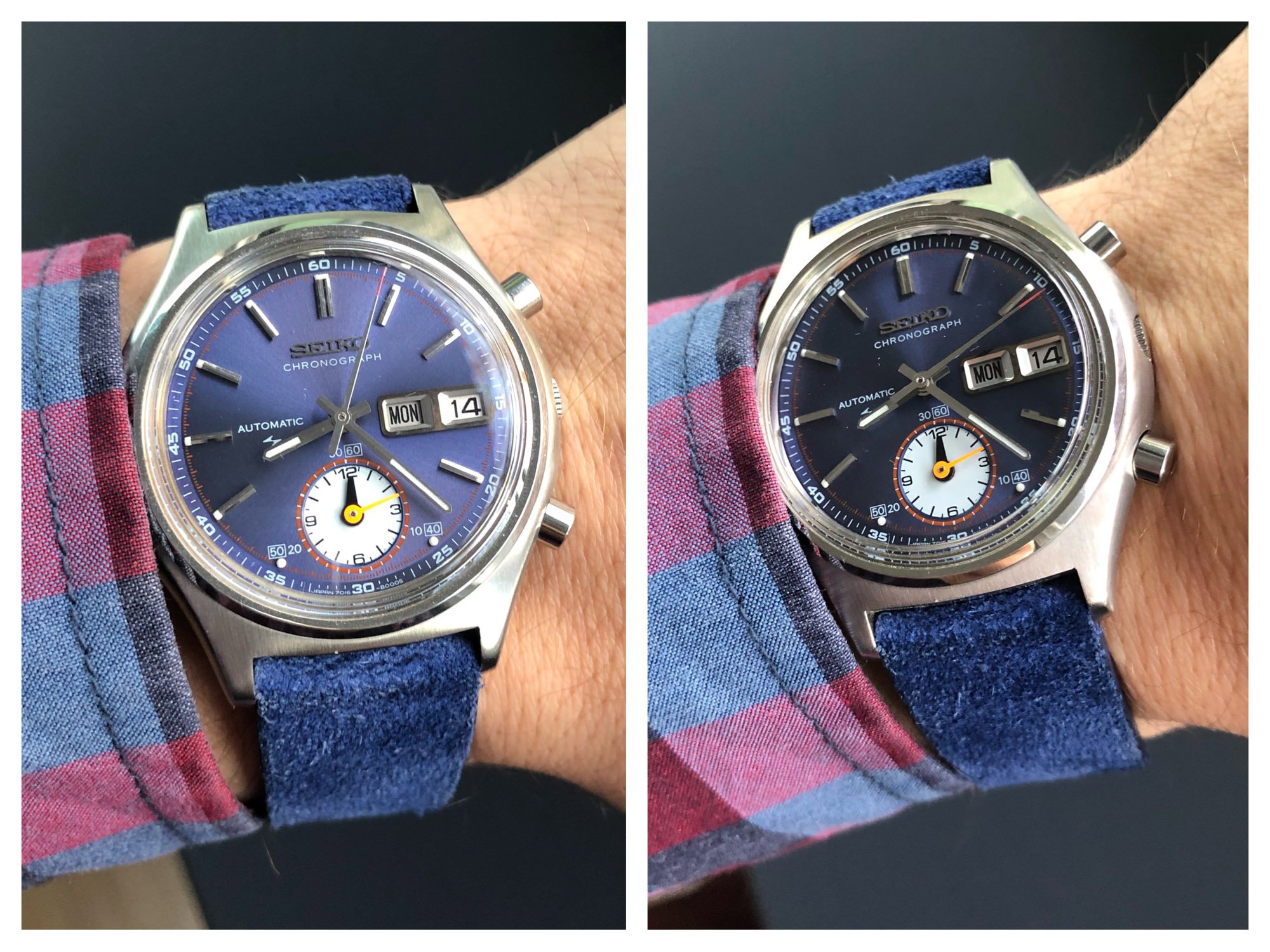 I pushed the Seiko7016-8000 higher up on my shopping list the moment I learned that its chrono has a flyback function. It works as usual – the top pusher starts and stops the chronograph and the lower pusher resets it. If you reset it without stopping the chronograph, the chrono immediately continues measuring time. Factoring in the previous specialities, you already get quite rich a package for such a decent watch. But we do not stop here. The Seiko 7016-8000 also comes with a quick-set date, adjustable by pulling and turning the crown out to the first position. Changing the date mechanism feels a bit shivery but it works reliably. 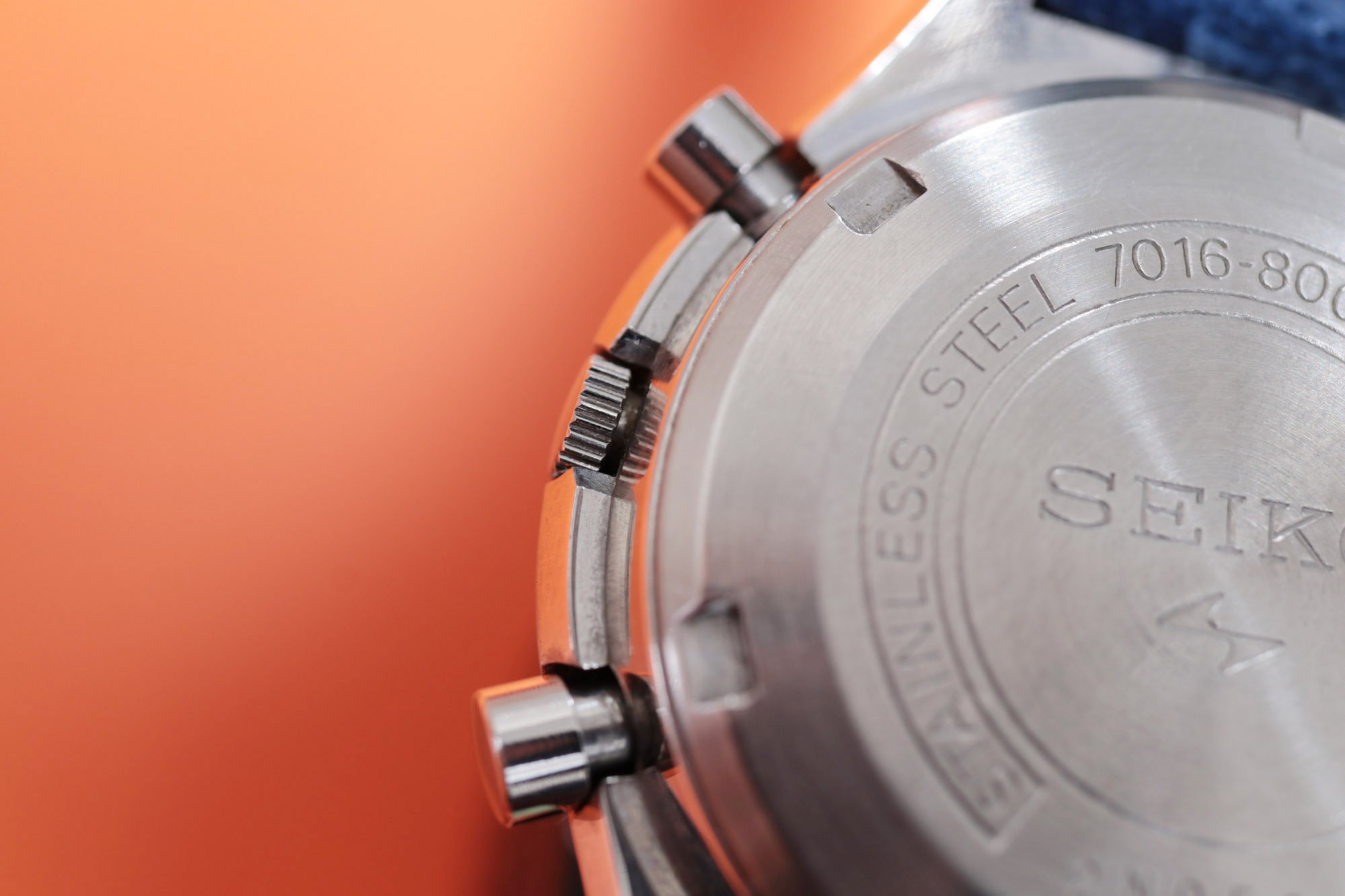 If you are still not hooked, I will feed you two other details to love. The crown is gently sunk and leveled nicely with the watch case. In addition to a date display, theSeiko 7016-8000 also has an indicator for the day of the week. Change-over system is bi-lingual and available in two variants – English/Japanese or English/Roman numerals. Applause. To change the day of the week you have to unusually, but comfortably push the crown down against the case. 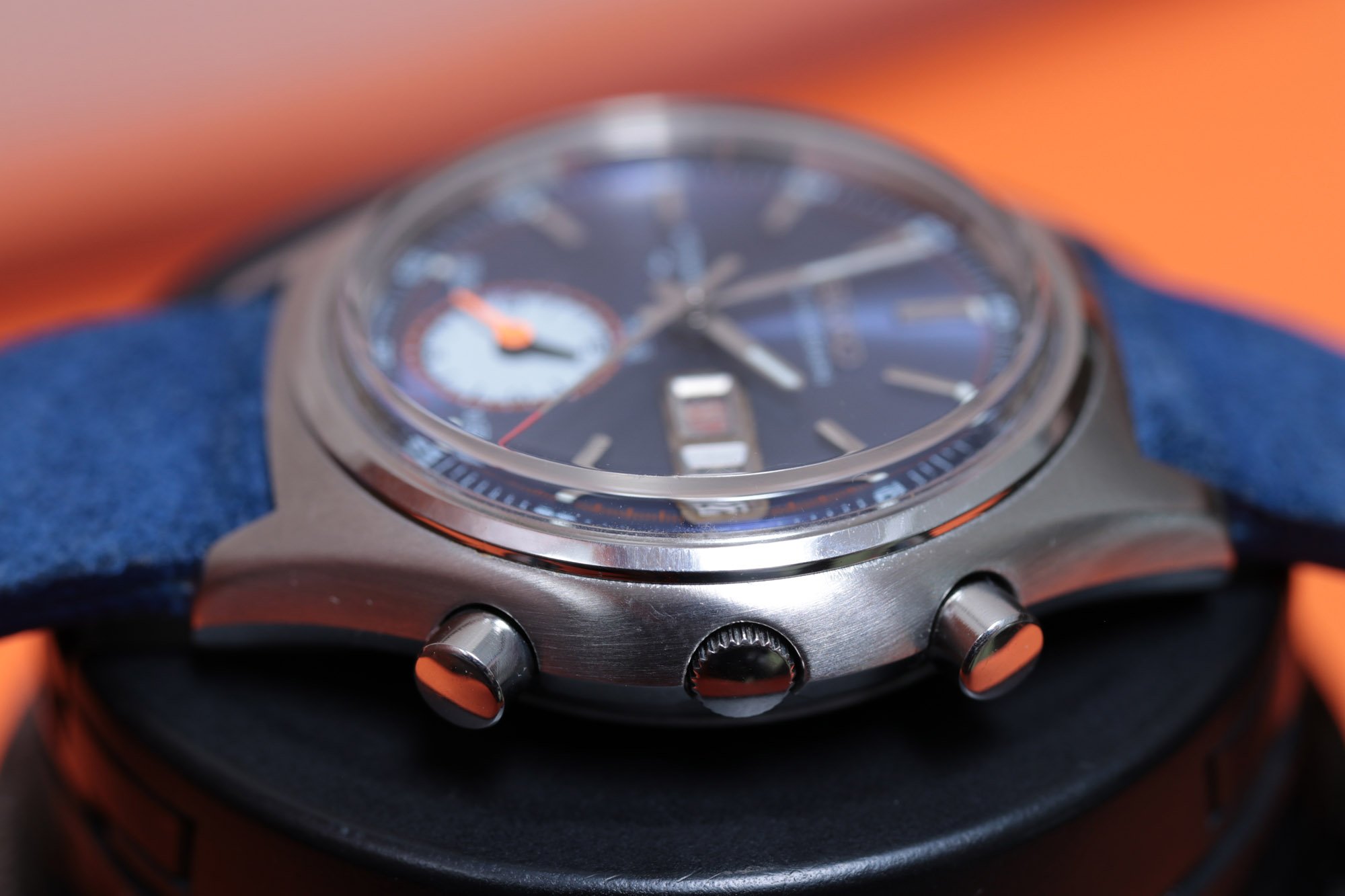 Maybe you noticed there is no information on jewels right on the dial. Although it is a top-notch movement with a complex set of features, it has the least number of stones. 17 jewels to be exact, compared to 23 jewels in 7018 calibers. From a construction point of view, the compact wheel train deserves some attention. „Rather than redesign the main plate to accommodate intermediate wheels and levers, Seiko chose to make changes to the wheels themselves, “ explains respected watchmaker for vintage pieces Richard Askham from the UK. 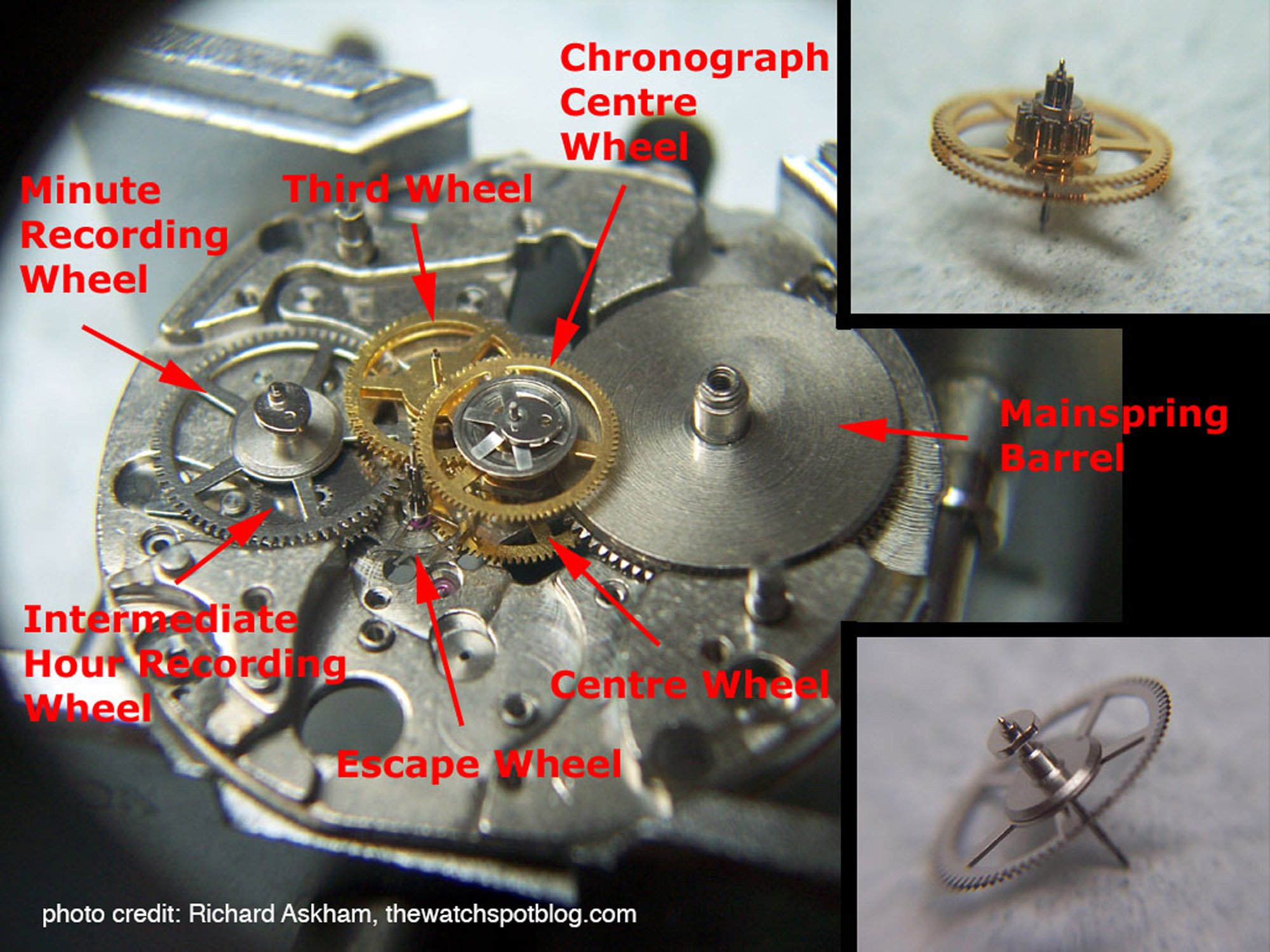 „The third wheel consists of two separate wheels on a single axle, each driven by a different pinion. The upper gear behaves just like a regular third wheel in that it transfers power from the center wheel to the fourth wheel. The lower gear is used only when the chronograph is engaged, transferring power from the chronograph center wheel to the minute recording wheel.“ 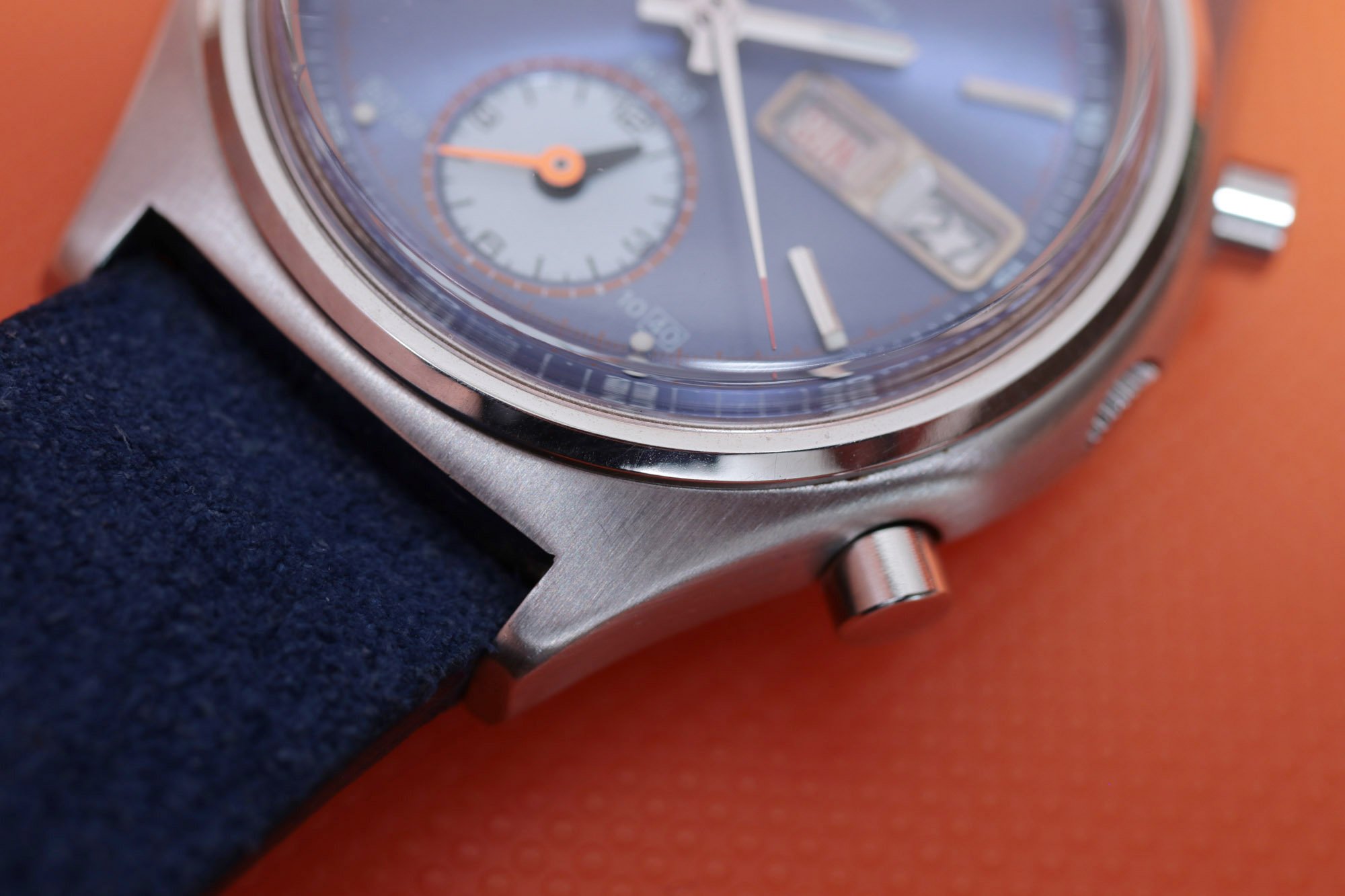 Well, that was on the clear part of my Seiko 7016-8000 story. Now the slightly foggy questions come up. Let’s start with the case. I found 2 different executions of the case. One with more rounded edges like mine and a second version with sharp edges. My initial thought was that the sharp one is the only original and mine will be the same, but highly polished. But seeing more and more rounded cases available, many being referred to as originals, I started to pay more attention to it. As you can see on the detailed model to model comparison, the casing on my watch at 9 o’clock is much wider and thicker than on the sharp one that I would consider a 100% known original. 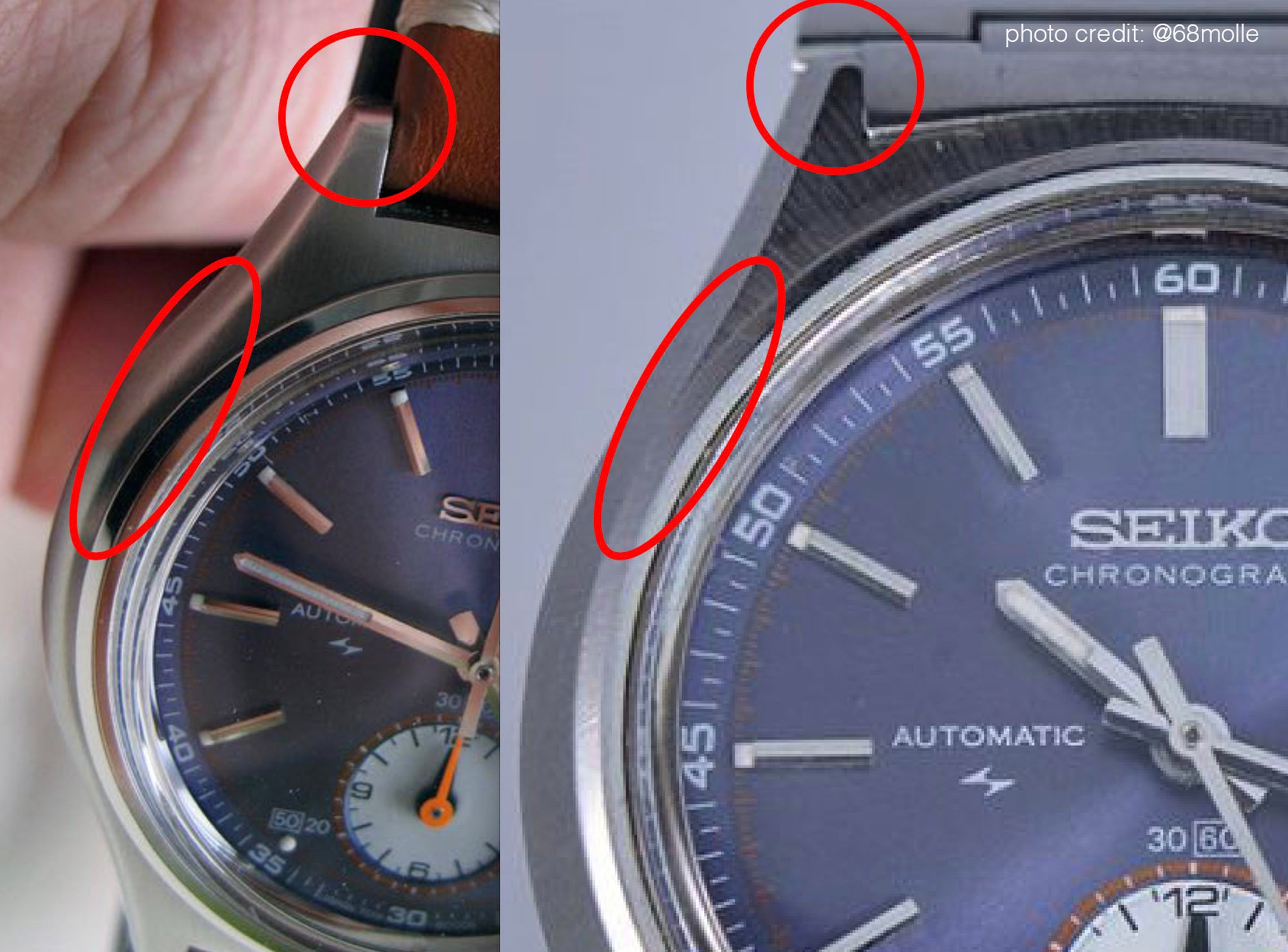 If my Seiko 7016-8000 was just a polished example of the sharp one, there should be less mass visible on the highlighted areas, not vice-versa. This comparison doesn’t say how heavily polished my Seiko was, but it definitely suggests there might be more casing options available for this watch type. Due to the low contrast between polished and brushed surfaces, I do believe my example might be lightly polished. 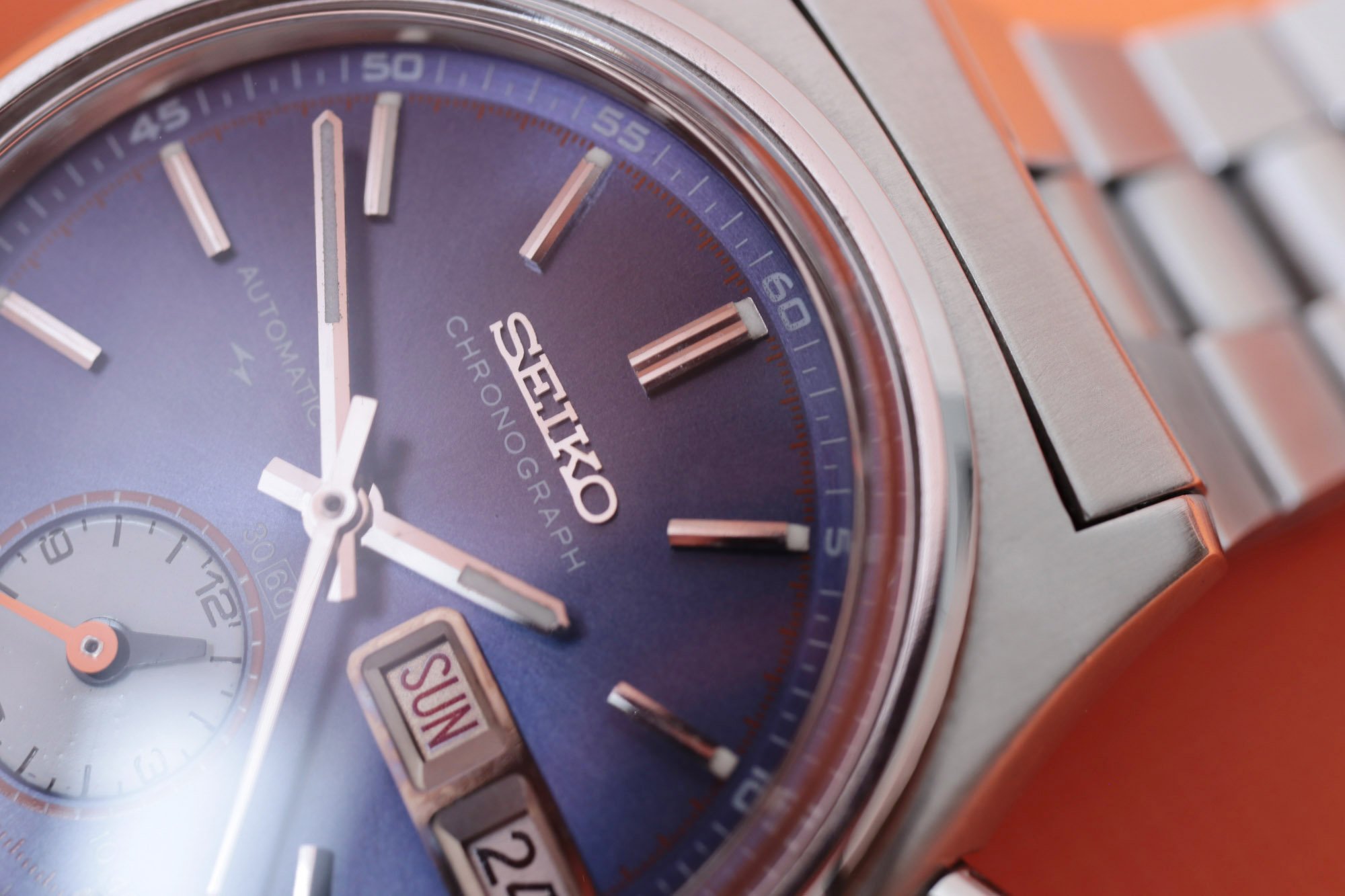 A simple question arises – hey dude, did you look into old catalogues? You bet I did. I can teach you how to say CATALOGUE in 20 languages. However, the Seiko 7016-8000 does not seem broadly presented or advertised. I found only one screenshot from an old Italian catalogue I am not able to date, but it clearly shows the 7016-8000 in a white version with doubled hands in the sub-dial. 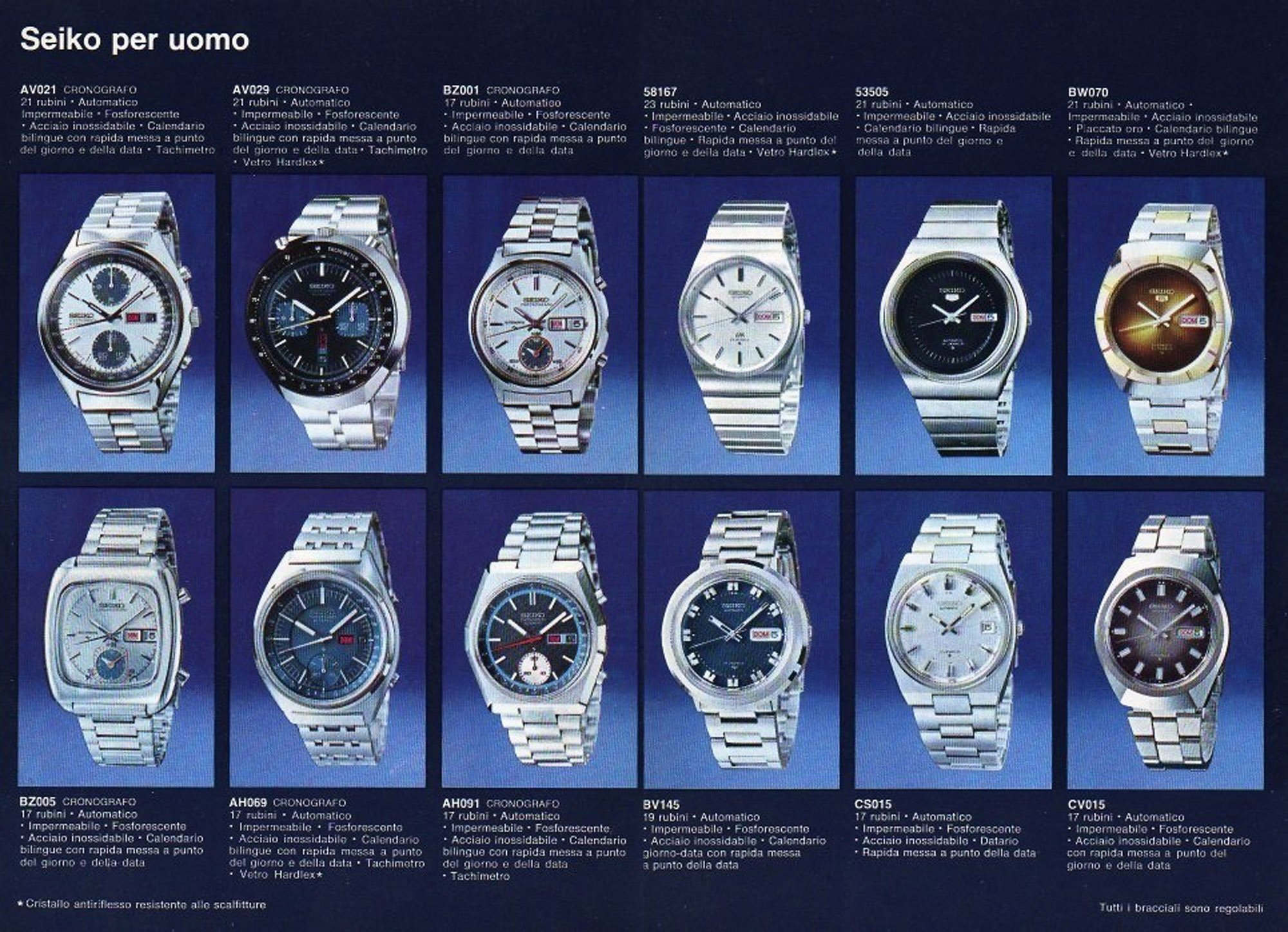 A brief look into the 1976 and 1977 catalogue might help with the watch case issue too. There are two case versions of the ref 7018 available, one case close next to the other. This leads me to assume that similar case options might be available for the 7016-8000 too. With clear addendum that the sharp-edged case is more difficult to come across. 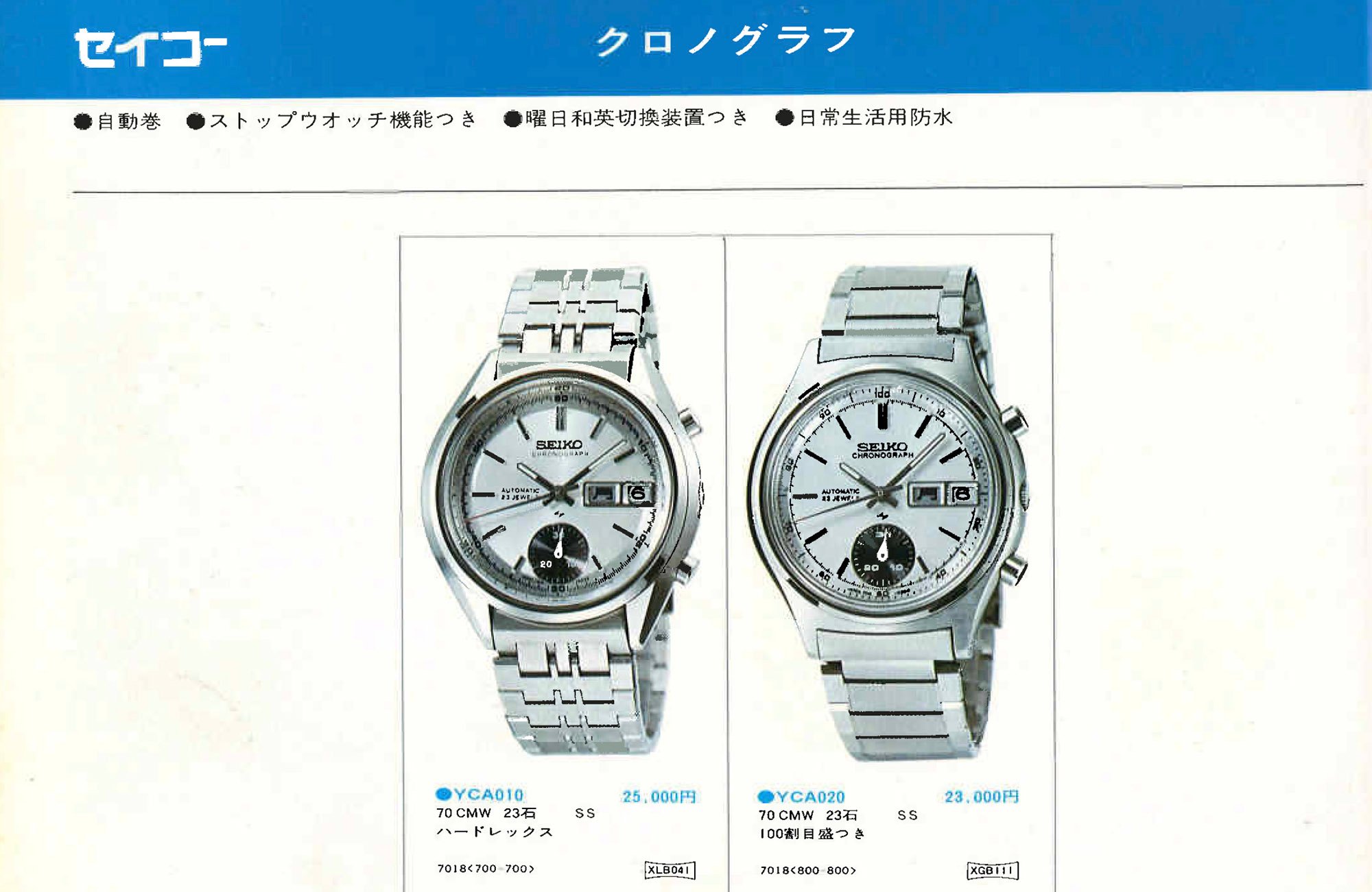 90% of all the models I saw carried a 7016-8001 engraving on the case back. Only a few examples, mine including, have 7016-8000 on it. Confirmed by multiple Seiko collectors, we believe there were no differences in those models. 8000 or 8001 numbering would just refer to the geographic area the watch was sold in. I still haven’t successfully determined which region it represents though. 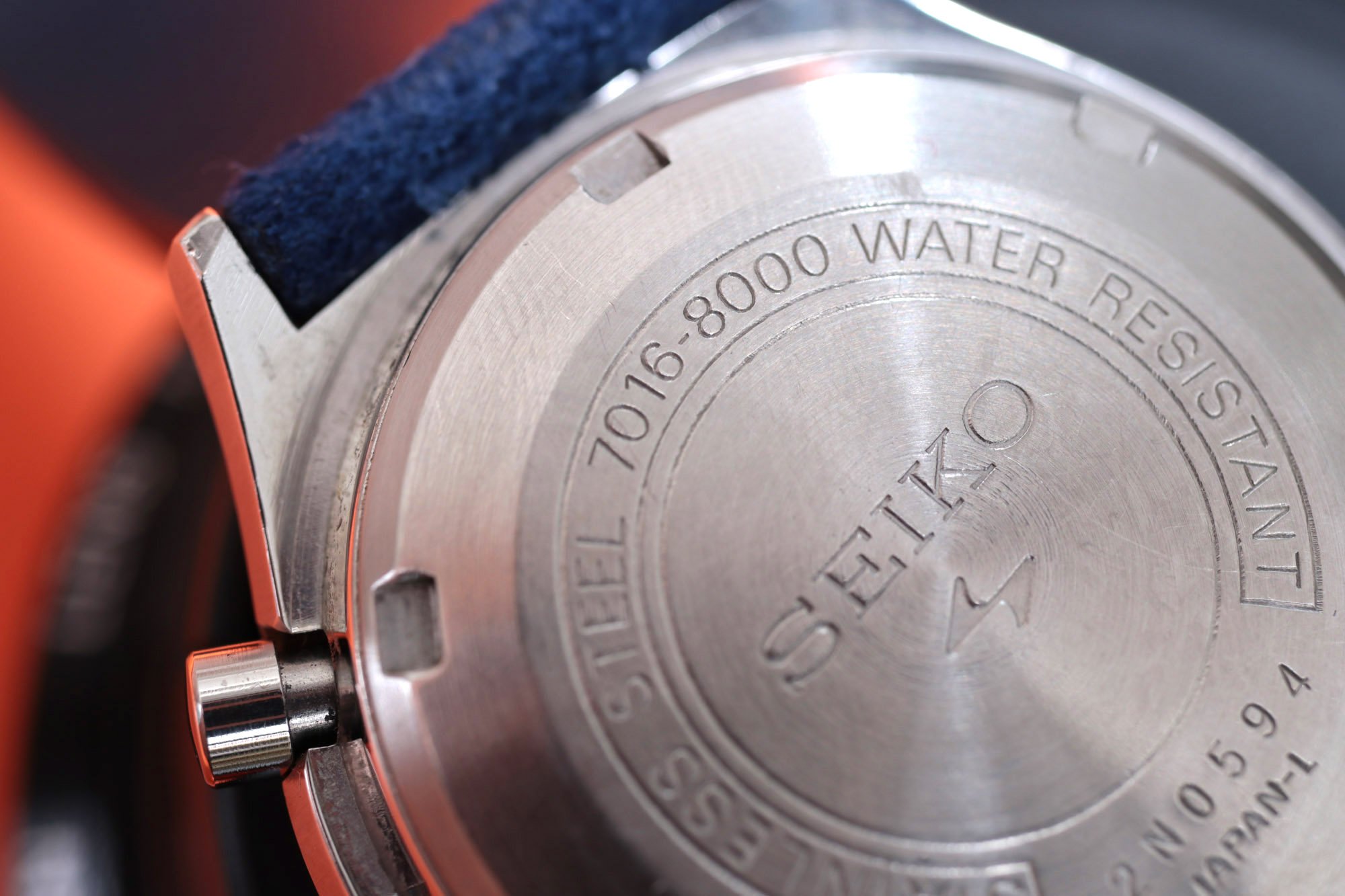 I will spare all the contemplations here. There are two serious candidates for bracelet fit, both believed to be original and probably varied based on the destination market. Solid link Stelux is present on two pieces we consider original examples. The bracelet type with Z022 end links as seen on my watch can be considered 100% original to the watch too as it is clearly visible on the screenshot from the old Italian Seikocatalogue. 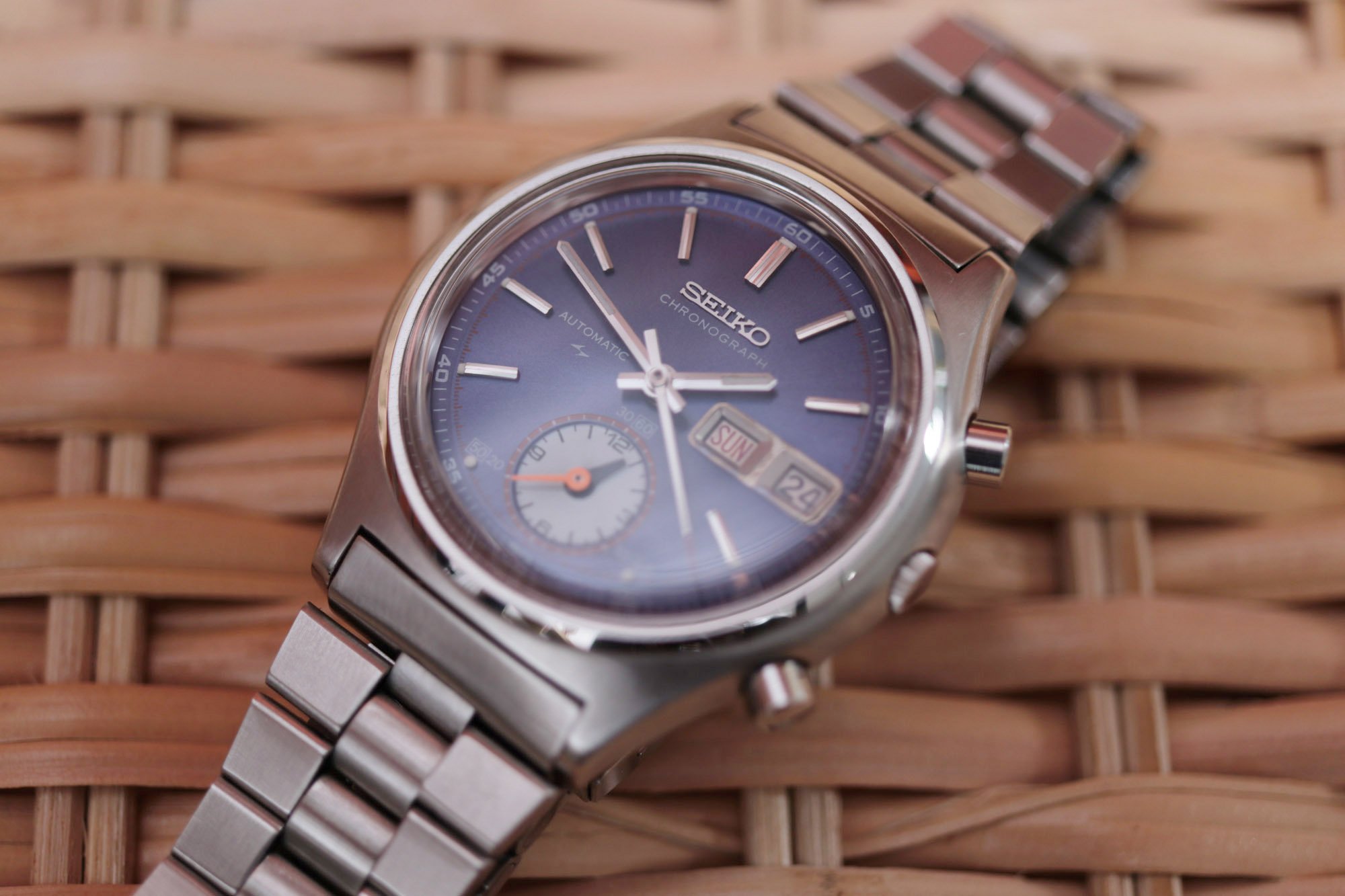 With a modest 38 mm diameter, this 21.600vph Seiko wears quite small but is comfy and offers a heavy feature arsenal. No compromise is necessary when it comes to the manipulation. Morning setup is fast, including no additional tolling such as a toothpick to get it set. One quick slap for the easily gliding rotor is enough to wake up the automatic heart. Pressing the top chrono pusher is definitely a new experience. The same with springing feeling when the crown sinks under your finger into the -1 position and back when setting the weekday. 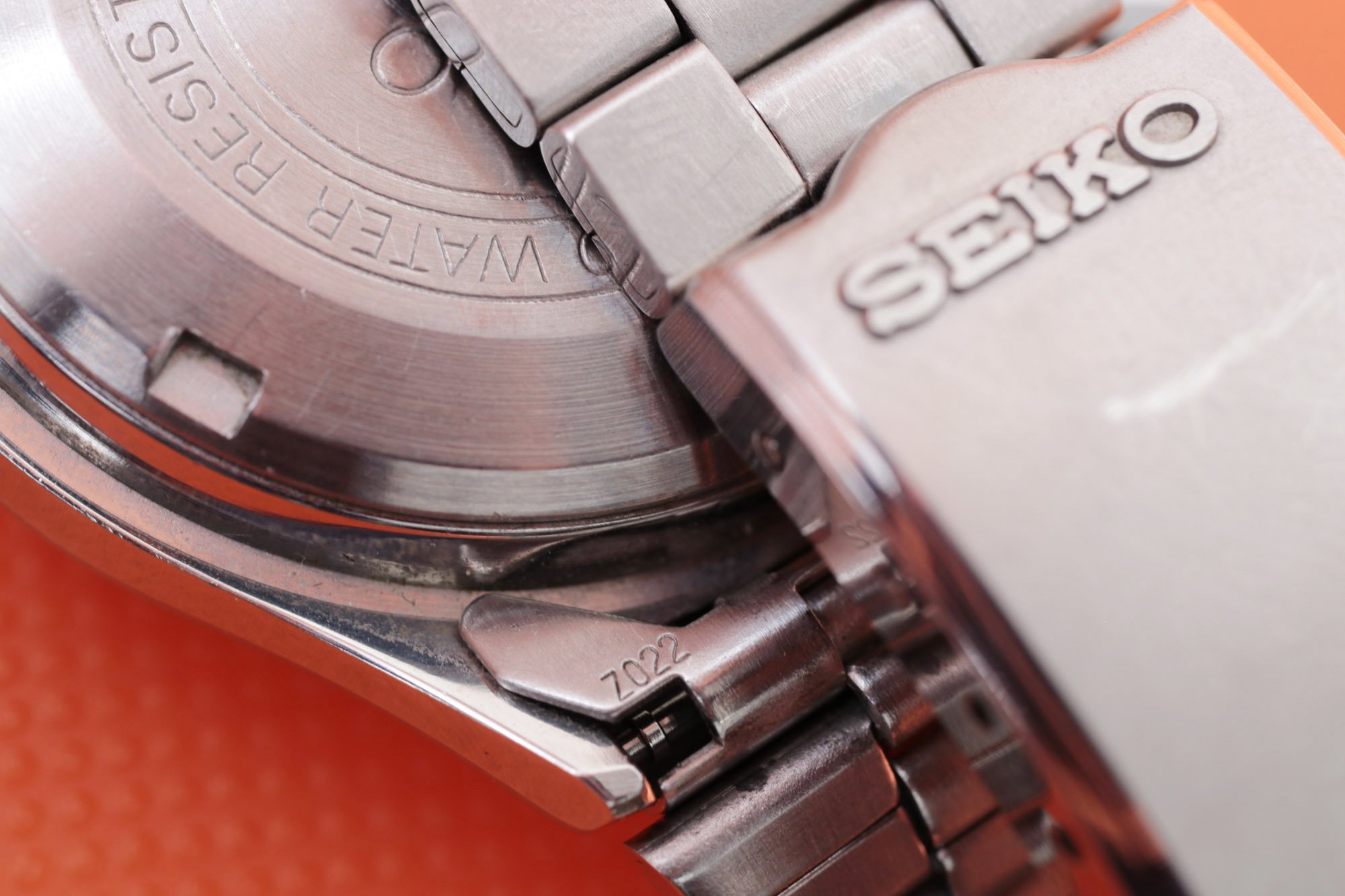 I consider the purple/blue dial with red tones (notice also red tip on central chrono hand) more charming than the more usual and better legible white/grey version. If you like the movement but aren’t sure about the design, you can look after the single-colored 7016-7000 with a tachymeter scale or the square 7016-5010/5020 versions. 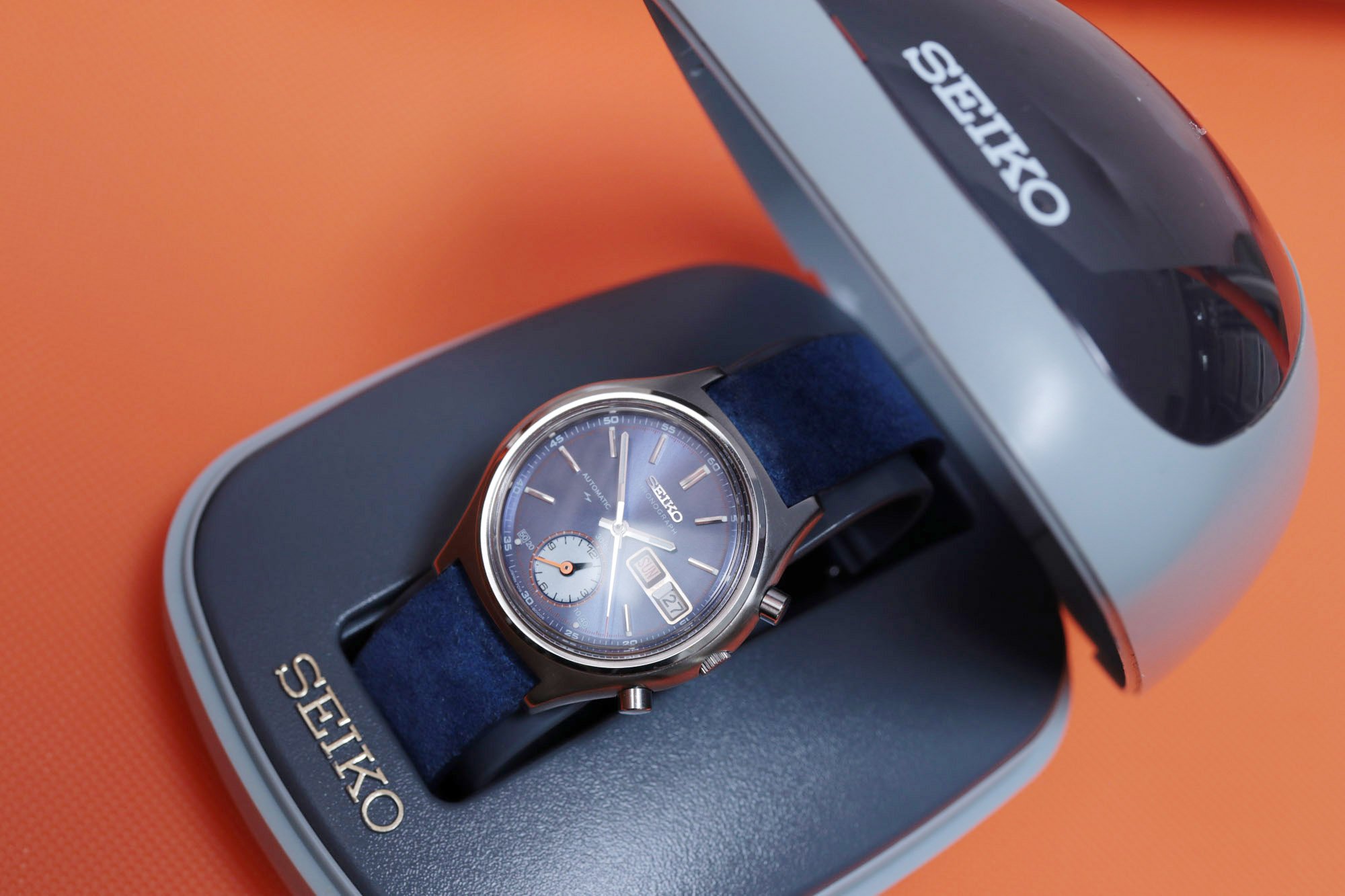 Why isn’t the Seiko7016-8000/8001 more sought after? I don’t know, I don’t mind. Good news is you don’t need to sell your kidney to get your hands on this fascinating hidden gem. But what makes me wonder is why such an advanced piece hasn’t been discussed more vividly. I do admit that the design doesn’t punch collectors in the face and might be easily interchangeable with ten other Seiko models. But to me, it screams – full pack feature set hiding specialities such as the flyback, stacked registers and a day/date system put together with great engineering virtuosity. All for a few hundred euros? Hell, yeah!