This week I’ll be wearing my last acquisition of 2019, the original and first Seiko Darth Tuna with reference SBBN011. Bought December 29th, 2019, but while out of the country I couldn’t take delivery of it until last week. I’m very happy to have it on my wrist now, and here’s why.

A bit of Tuna background first: In the late sixties and early seventies, professional saturation divers had started to use Seiko’s watches. But all was not well. It quickly became apparent that the inert helium gas used in saturation diving could enter a watch when under extreme pressure. This undesirable intrusion resulted in a massive pressure build-up within the case (equal to the external pressure). Then, while decompressing, the helium gas couldn’t get out quickly enough which was causing the glass to blow off. You don’t have to be a professional diver to know that’s not exactly ideal… 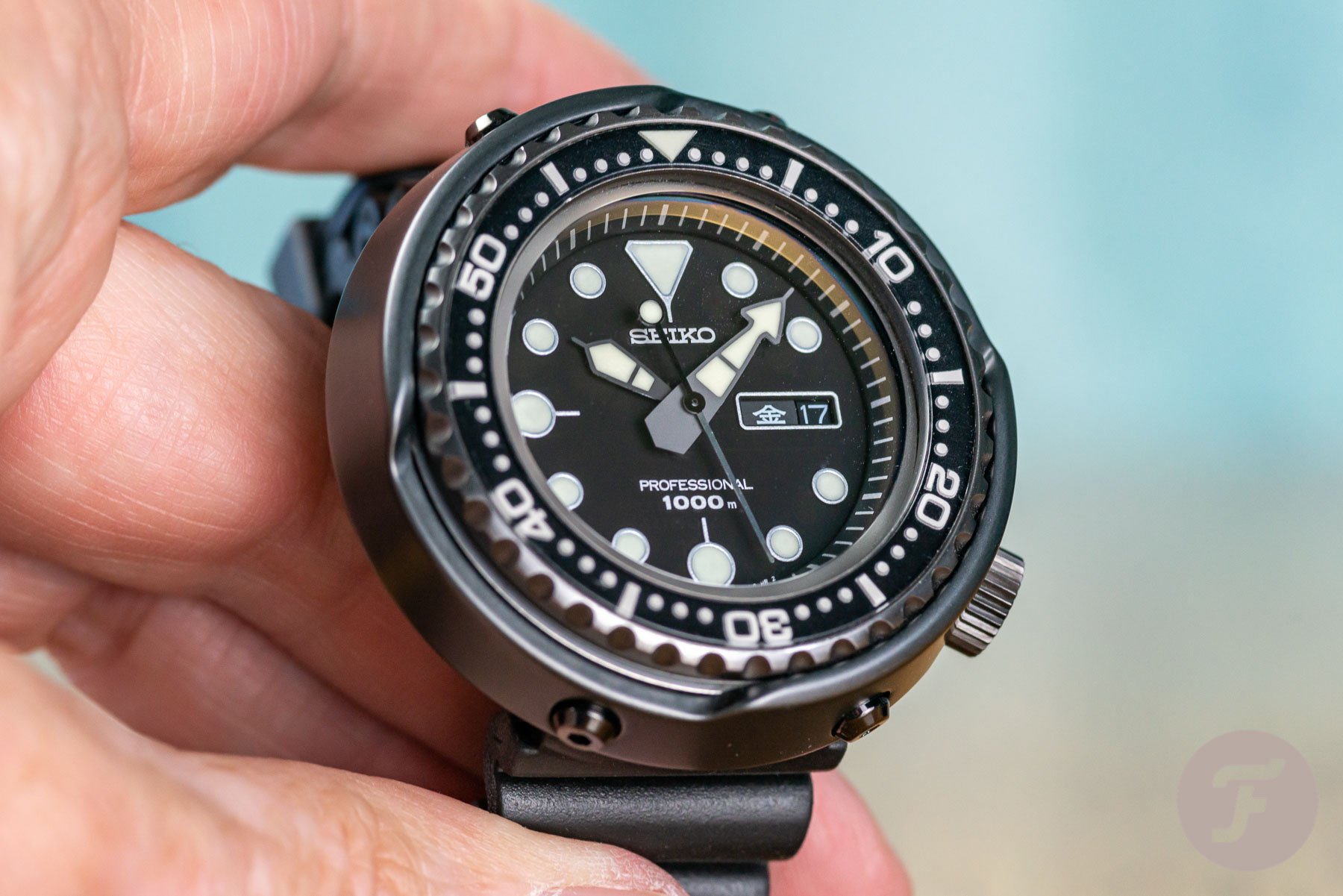 Birth of the Grandfather Tuna

While others opted for a helium release valve to let the pressurized gas out, Seiko decided that prevention was better than the cure. The brand’s engineers devised a solution so that the helium wouldn’t enter the watch in the first place. A special type and construction of the gasket, combined with a titanium monocoque casing did the job. In 1975, it was used for the first time in the Seiko 6159-7010, which would become known as the Grandfather Tuna. Robert-Jan did a solid write-up on that watch here.

With the reference 6159-7010, the Tuna was born. It was a watch with a lot of firsts. It was Seiko’s first watch with a depth rating of 600m. And it happened to be the world’s first diving watch with a monocoque titanium case. As well, it was the first watch to feature a two-layer case construction with a protective (stainless steel with a ceramic coating at that time) shroud around the outside of the actual casing. With a similar shape, it must have been the latter which, quite sometime later, by the way, provided this type of watch with the Tuna nickname. Improvements to the original

Over the years, Seiko steadily improved their saturation diver’s watch. Mechanical watch movements were having a rough time in the market, with the emergence of quartz technology. Unsurprisingly, Seiko’s first upgrade to its most professional watch was a 5-jewel Seiko caliber 7549 quartz movement. Next up was an increase in depth rating of 1,000 meters. And the protective shroud became ceramic-coated titanium instead of stainless steel. At the same time (around 1986), the quartz movement itself was upgraded to the 7-jewel caliber 7C46. As of today, this same movement is still used by Seiko for their most professional diver’s watches. 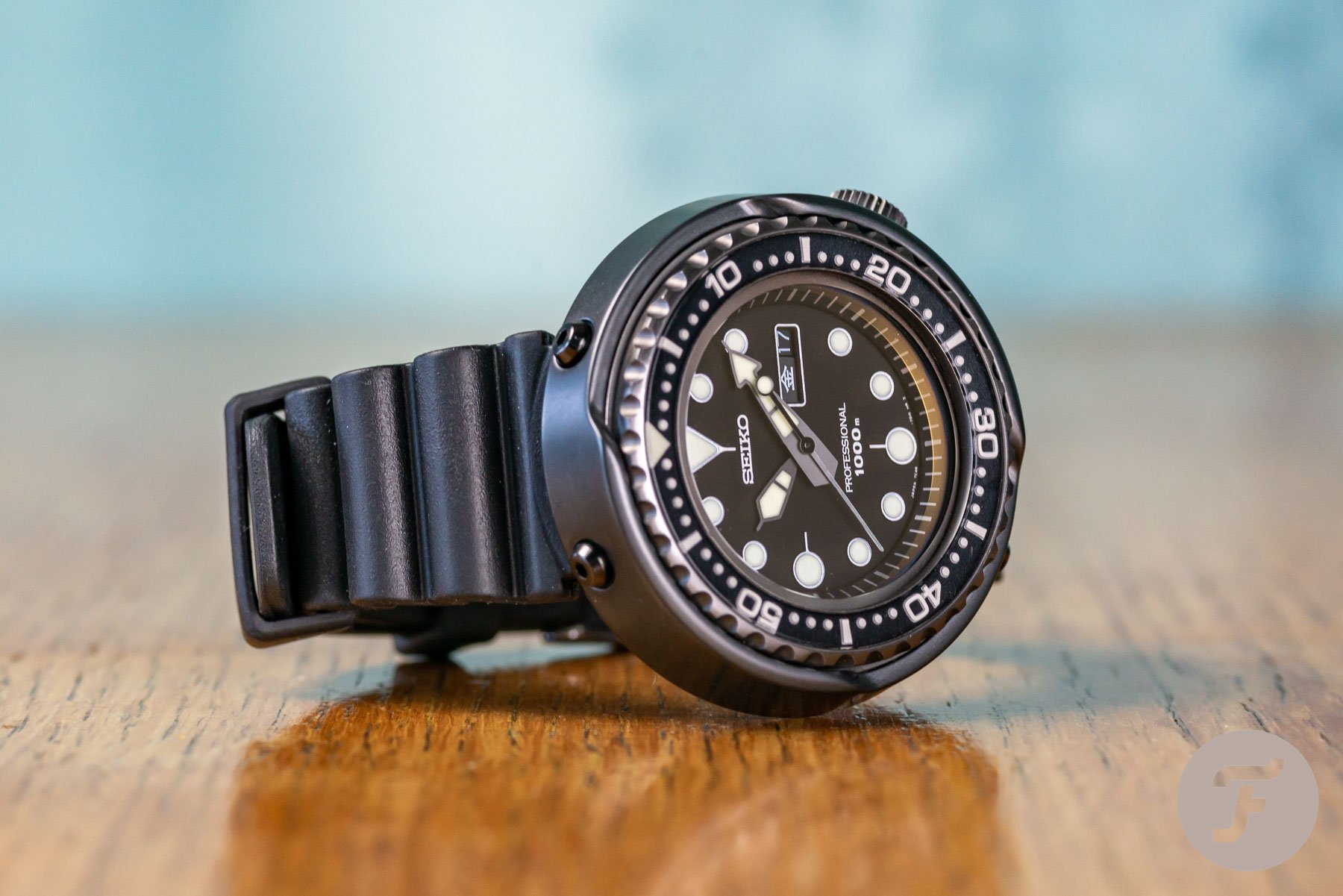 In 2005, thirty years after the birth of the first Tuna, we saw the third real update of Seiko’s Professional Saturation Diver’s watch, reference SBBN011. This time the most obvious modifications were aesthetical, but some technical improvements should be mentioned as well. The 1,000-meter depth rating remained, as did the high-quality caliber 7C46 quartz caliber. But the watch had a new skin that stole the show: Seiko decided to use a black DLC coated titanium inner case instead of the old gold-colored TiN coating. Not only on the inner casing, however, on the steel bezel as well. The result was an almost all-black watch, quickly nicked Darth Tuna. And because of its black cylindrical appearance, sometimes referred to as the “hockey-puck” as well. 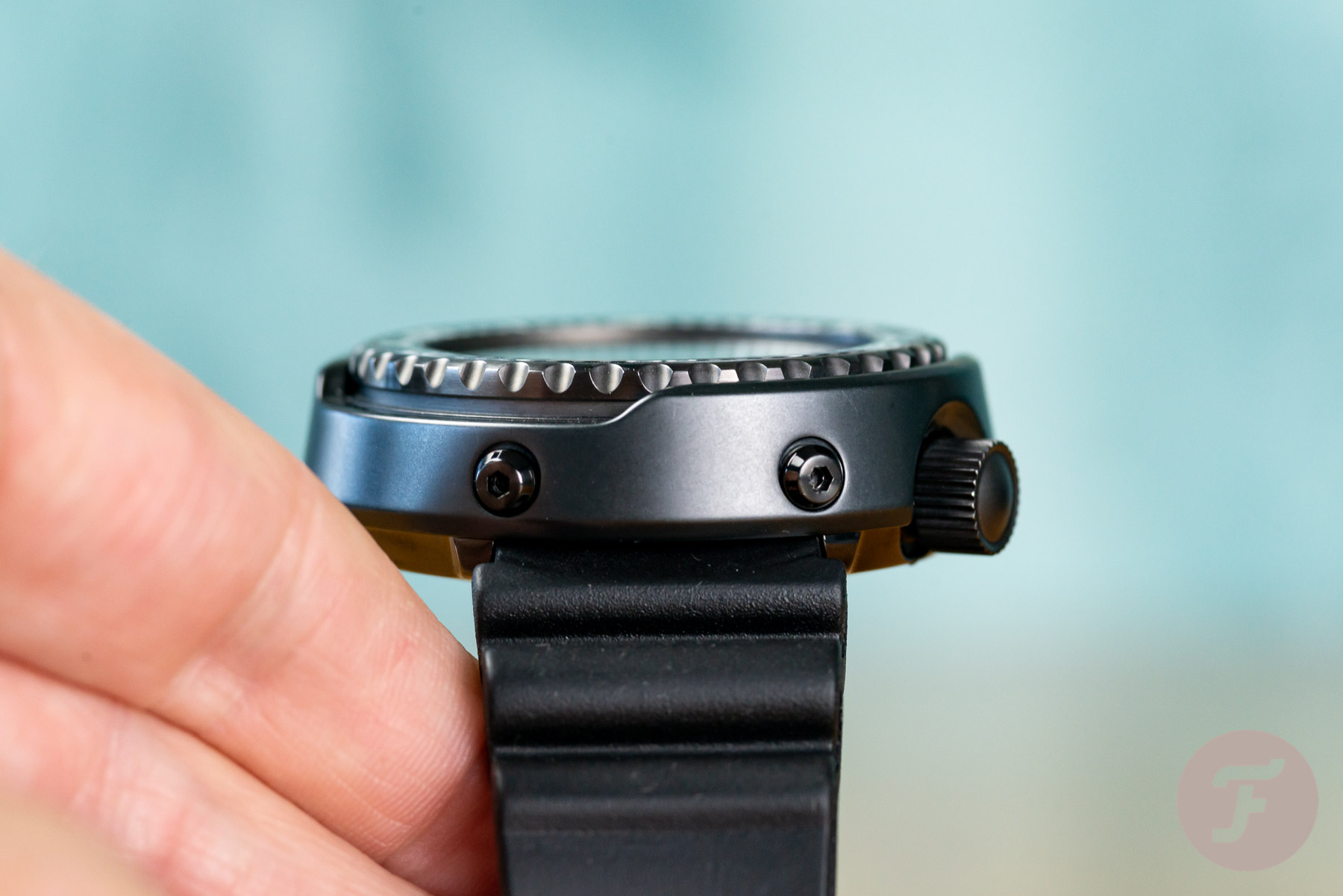 As said, with the SBBN011 technical improvements were made as well. The Phillips screws, used to mount the protective shroud to the inner casing, became hexagonal bolts. The Darth Tuna has black ones (of course). While, until now, Seiko relied on their home-grown Hardlex glass, the Seiko SBBN011 Darth Tuna was the first to have a sapphire crystal (also boasting an internal anti-reflective coating). It was also the first of the professional saturation Tuna dive watches to get an all-ceramic shroud, instead of a coated steel or titanium one. For the sake of readability, there’s a complete specification sheet of the Seiko SBBN011 at the end of this article.

What was next, what happened to the Darth Tuna?

After 2005, it took Seiko only a while before they came up with other news. Anyhow, I don’t want to go into the course of life of all Tuna’s here. We have a rather complete and informative reference article on that which you’ll find through the following link: Seiko Tunas for the Rest of Us.

But what happened to the Darth Tuna? In fact, even today over 30 years later, not much. Certainly technically speaking nothing has changed. And any aesthetic tweaks have arguably been to its benefit. It took only 4 years for the SBBN011 to be succeeded by the SBBN013 in 2009. As marginally as the model numbers differ, the watches differed as well.

Even the reference number didn’t change, 7C46-0AA0. The indication ‘Marine Master’, which was found at the backside of the SBBN011 case only, was taken to the dial, relocated to a spot above the 1,000m and Professional signatures. For the rest, the crown was signed with an ‘S’ and that was it. Good to go for another 6 years.

A real improvement (to the strap…)

Then, in 2015, the model SBBD025 (reference 7C46-0AH0) became available. It can be seen as the second update of the SBBN011 Darth Tuna. It still uses the same quartz movement, it has the same case dimensions, the same ceramic shroud, and the same black PVD coating of the titanium monocoque case. Most eye-catching are the new arrow-shaped hour hand and the straight minute hand.

These types of hands can be found on many other modern Seiko Marine Master and Prospex dive watches nowadays as well. It’s not the first time changes were made to the hands of Seiko Tuna watches, however, it was rarely radical. While the Marine Master designation can still be found in the dial, the S at the crown has been replaced by the Prospex X-logo (which in fact comprises the letters “P” and “S” styled to resemble an “X”). With the SBBN025 Seiko changed from a polyurethane strap to a soft silicone strap (a real improvement in my opinion). Because of the aesthetic changes, the SBBN025 Is sometimes referred to as the “new Darth Tuna.” 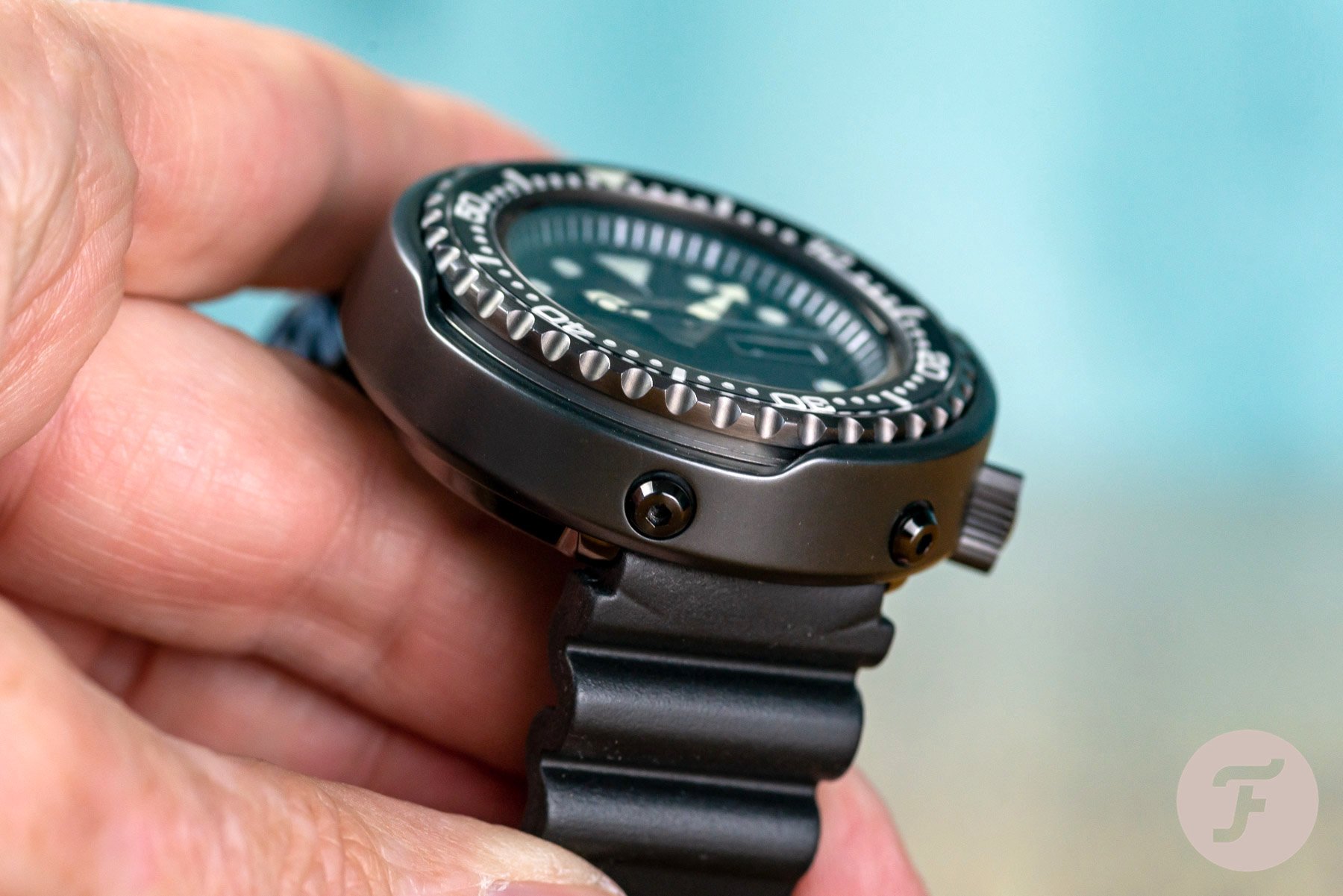 At this point, I would like to draw attention to the fact, that this watch technically didn’t change in over 30 years. That’s pretty hard to beat. That kind of consistency and longevity suggests Seiko was doing something right — something very right indeed.

Let’s dive into the details

While the Darth Tuna technically didn’t change during the last 30 years, there are a few aesthetic changes worth mentioning. Below, is a side-by-side comparison of the SBBN011 and the modern SBBN02x. I’m using the SBBN02x because I don’t have an SBBN025 to hand. The SBBN029 is, except for the color of the ceramic shroud (bright instead of black), exactly equal.

The hands of the SBBN011 might not be exactly equal to those of the Grandfather Tuna, but they’re very close. There was a very small change between the first Tuna model in 1978 and its quartz successor, more in structure than in shape. The SBBN011 sports the same hands as the first quartz powered Tuna in 1978. The current (New) Darth Tuna SBBN025, however, got a totally different, straight minute hand and a wide-arrow tipped hour hand.

These are more in line with a variety of current Prospex models, but not loyal to the original Tuna hands. The seconds hands of Tunas are historically made from bare metal with a black tail and a circular, luminous counterpoise (this is the case on my SBBN011 as well). The modern Darth Tuna, however, has a white painted second hand with a shorter black tail and luminous lollipop. All in all, I must admit that the legibility certainly didn’t become worse with the new hands. 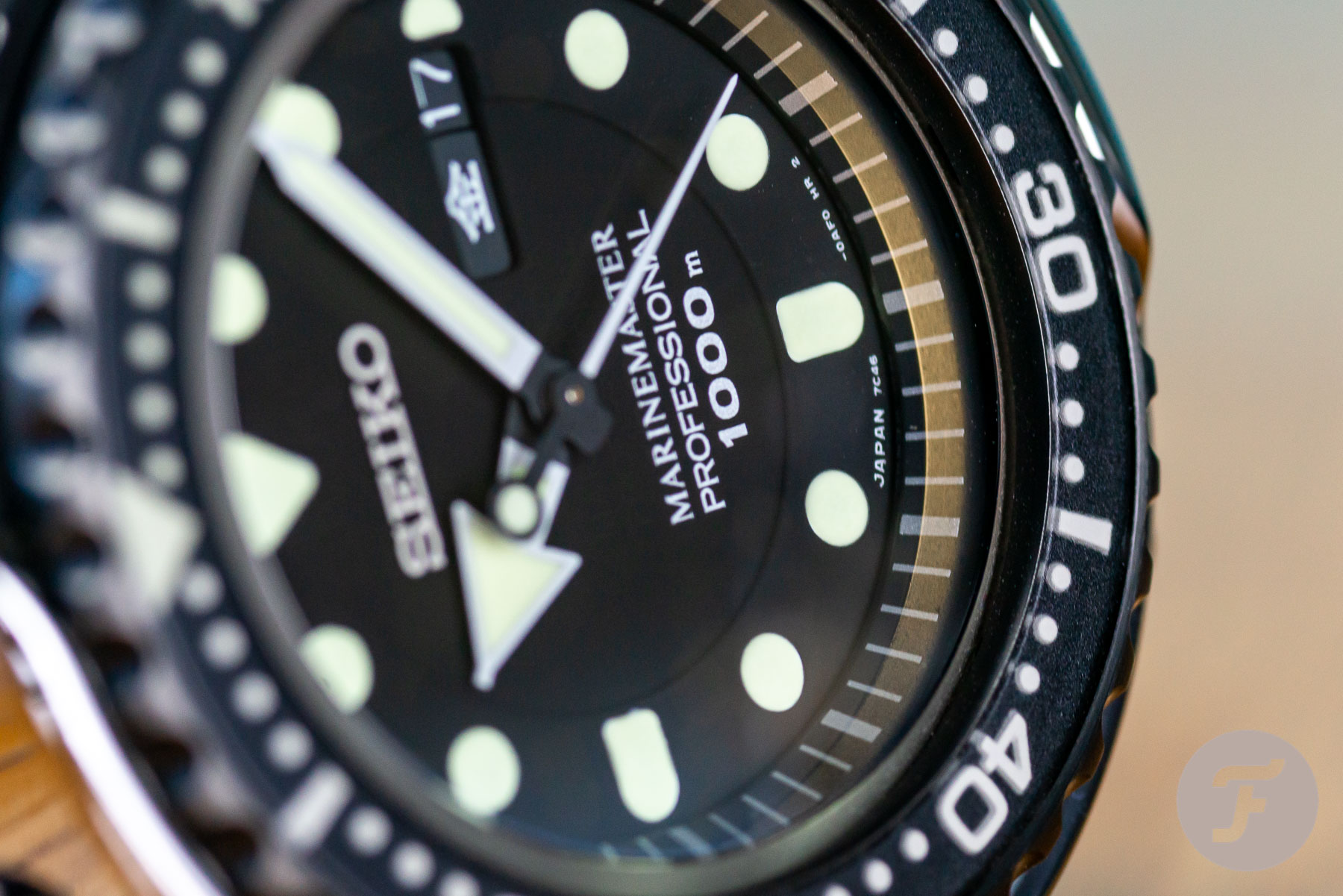 At first sight, the dials from the first and last Darth Tuna models might look pretty equal, but under scrutiny, many subtle changes become apparent. I love clean dials, certainly for professional tool watches. In my opinion, the Marine Master text is therefore unnecessary. It just fills up the dial. Besides this, the fonts used on the New Darth Tuna are larger than in my SBBN011. Even the Seiko brand name is larger — there is no need for that.

Even the Seiko brand name is larger…

I like the index markers at my SBBN011 to be circled by raised metallic rings (just like the triangle at 12). The current SBBN025 doesn’t have that. Neither does it have the little applied lines emanating from the cardinal indexes at 12, 6, and 9, which had the effect of virtually dividing the four sectors of the dial. And finally, I prefer the cardinal markers to just be slightly larger circles.

On today’s SBBN025, the cardinal markers got a different shape entirely. A micro-marker was also added near the date window (which might have something to do with ISO standards). Then, but this is hardly noticeable, the markers in the dial of the SBBN025 are placed on a slightly raised circle. It’s not that I specifically don’t like this, but I don’t see the need for it either. The crowns are very similar, but the addition of the “Prospex” logo is notable.

Crown of the original Darth Tuna

My Seiko SBBN011 Darth Tuna must have been one of the last produced. According to its serial number it was produced in July 2008 in Japan. And according to its warranty card, it was sold in December of that year in a little shop at 9, Rue Ville Pépin in Saint-Malo, France. Only one month later the SBBN013 made its debut. 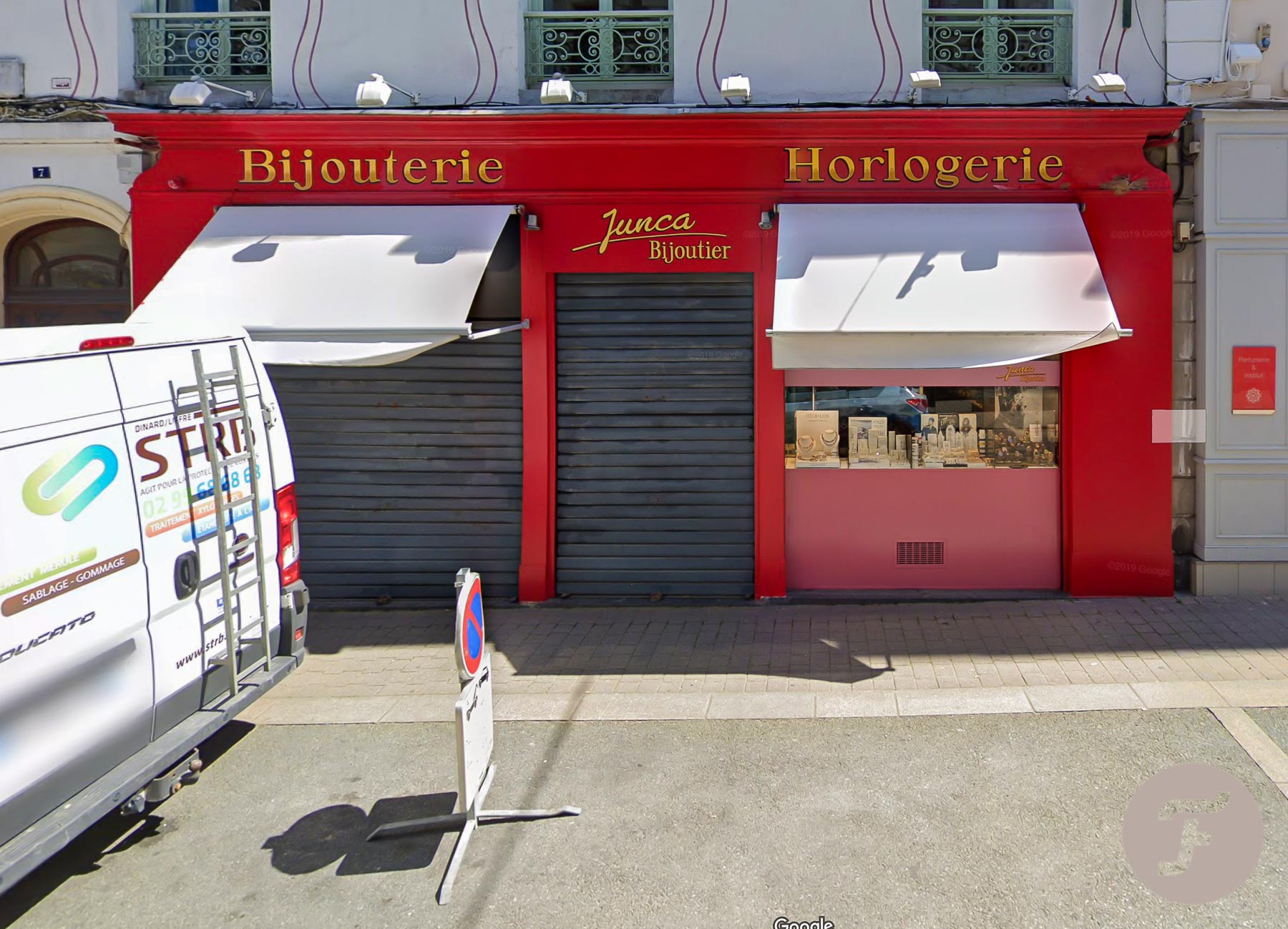 The little shop in Saint-Malo, France, where the Darth Tuna of this article was bought in December 2008

Being more or less the definitive update of the Seiko Tuna Professional Saturation Diver’s, as far as the quartz-powered models are concerned, the SBBN011 is, for me, the better model. It’s at the top of the technical specifications, and its appearance is as close as it gets to the original idea of a Tuna. But aesthetics are very personal, of course. While I’m not a huge fan of the newer handset (nor the newer dial, for that matter), others may feel differently (let us know which you prefer in the comments below). The biggest improvement of the new SBBN025 Darth Tuna is the silicone strap, but if you want one of those on your earlier Tuna it is easily done. 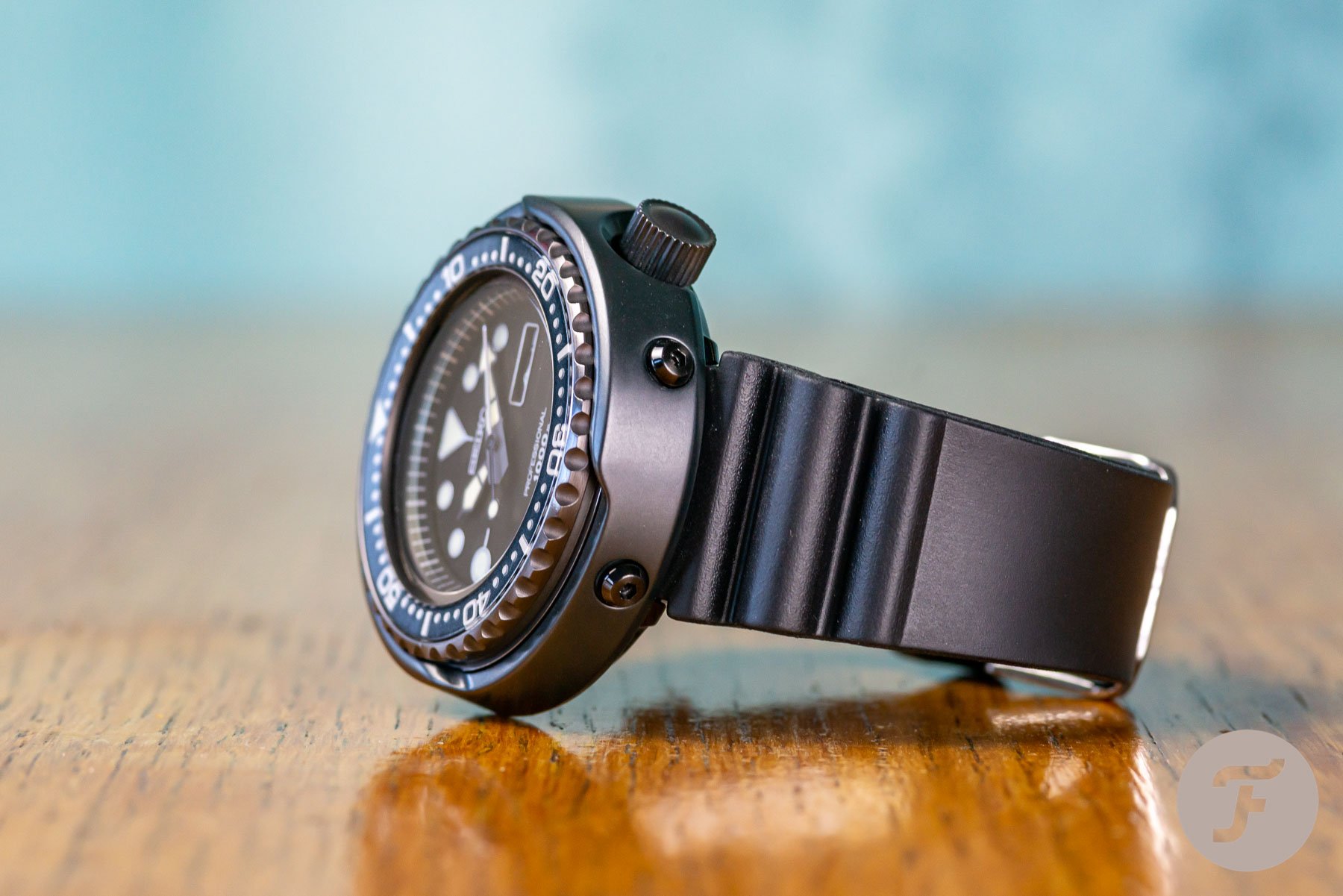