It’s October and that means it’s #Seikoctober for those of you who play along on Instagram.  As I write this, Robert-Jan also happens to be in Japan checking out all things Seiko.  So, what better than to talk a little about one of the brand’s most famous pieces: the Seiko 6159 Tuna.

Welcome to what we’ll call a “#TBT extra” on Fratello Watches. Every so often, a reader writes into us with an interesting story or question on a vintage watch. Sometimes, it even results in me hurting my account! Today’s brief account, though, is really about a reader who asked some questions on where to service a Seiko icon, the 6159-7019 original “ Grandfather Tuna”. We had a much longer review on this watch earlier this year, but felt you’d like to see pictures and hear the story of an original owner piece.

If you’ll allow me to wax a bit, we talk about vintage watches today mostly from the perspective of how they look – well, today. Sure, we discuss how the watch came into production, any technical innovations and why it was created. What we often miss, because the information rarely exists, are the firsthand perceptions that existed about a brand or model during its actual production date. If I had a time machine, aside from buying everything (and of course altering the time-space continuum), I’d love to see how certain brands were marketed, how they compared to others, etc., etc. While it’s likely a gross overstatement, some of the watches we actually fawn over may have been seen as the equivalent of today’s Michael Kors pieces! So, yes, I get excited about talking to people about the past and why they chose certain watches. Moving on… 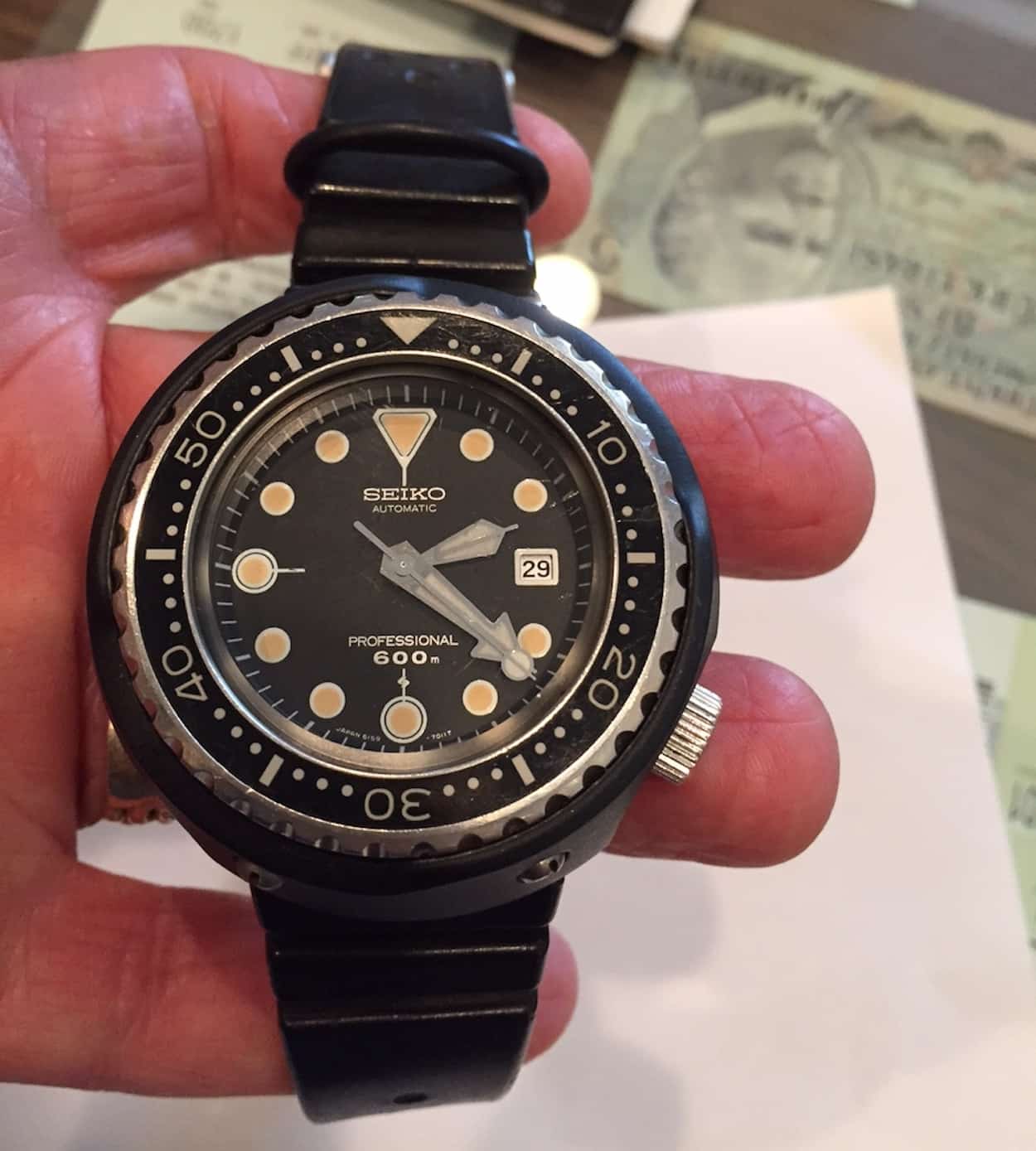 Paul Sullivan of California wrote to us with a question on where to service his “ur-Tuna” and we struck up a back-and-forth chat that ultimately led to the brief comments on his buying and using experience and a few pictures. The 1976 Seiko 6159 Tuna that he owns has its original strap (per normal, that darn keeper gave up the ghost a long time ago, though), which he cares for by religiously adding rubber preservative. As you can see, it’s in stunning shape…just look at those hands and that dial!!  And about that shroud!

PS: I bought this watch as a replacement for my first, cheap, dive watch that quit on me the day before leaving for a dive trip to Hawaii. 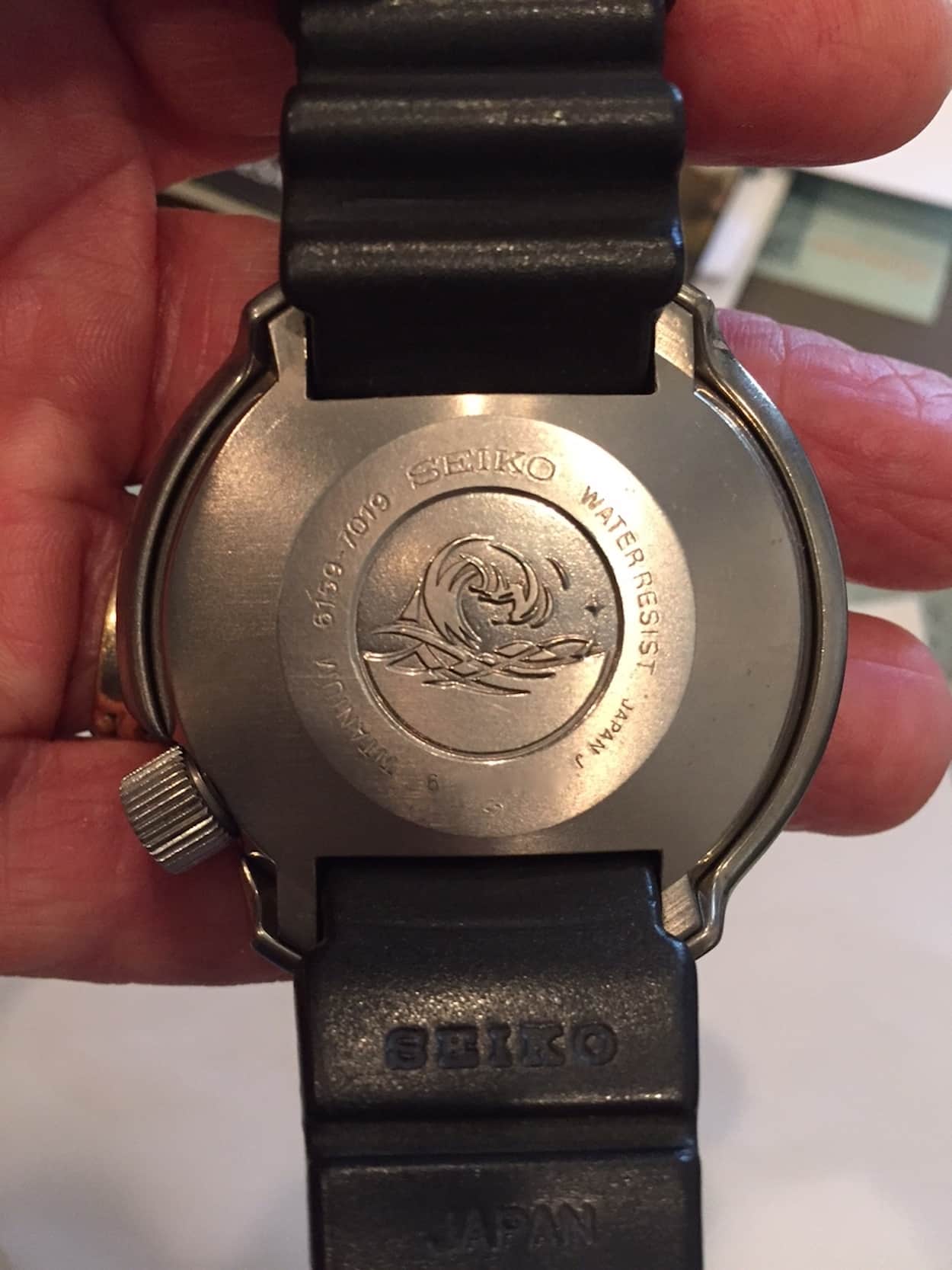 FW: Was it expensive? I’ve read that it definitely wasn’t cheap.

It cost $500 in 1976, a lot, but I was doing a lot of diving and assisting my former instructor and friend in teaching his certification classes. So, I figured I would get something to last but not as expensive as a Rolex. FW: Where did you get your Seiko 6159 Tuna? Did they have to “sell” you on the watch or did you know about it beforehand?

Went shopping and saw it in the window in a watch shop in the Fox Hills Mall in Culver City, CA. No one sold me, I could tell it was good and Seiko was a very big brand at the time. 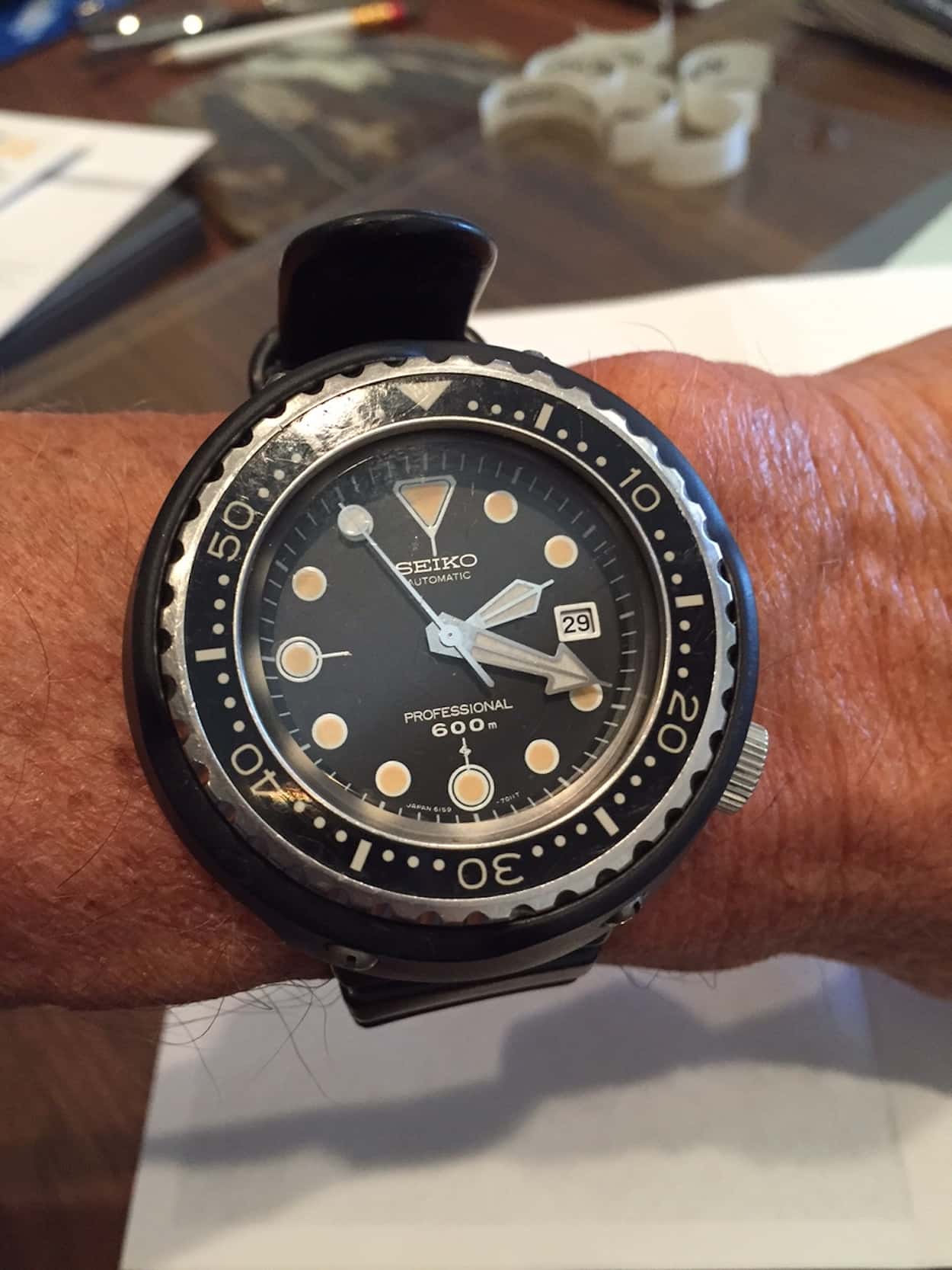 FW: What kind of use did your Seiko 6159 Tuna see and how did it perform?

It was only for recreational diving, but not all easy jump in and go. I did many strenuous dives from rocks and lava flows in changing tide and surf conditions and as deep as 165 feet, max on compressed air. This watch with its size was very easy to read in all conditions and the ergonomic bezel quick to set. They (Seiko) thought of everything to make it stand up to the rigors of heavy use, attested to by the performance today, 40 years later, even though it spends a lot of time in my desk drawer. I’ll probably never part with it…memories, you know.

Thanks so much to Paul for writing in and sharing a little watch history with us! If you have a great watch story you’d like to share with us, we’d love to hear it…just drop us an email!