SevenFriday honoured us with not one but two review watches. Two of the latest additions to their growing collection, the M3/01 Spaceship, and the P1B/03 Japan Inspired models. 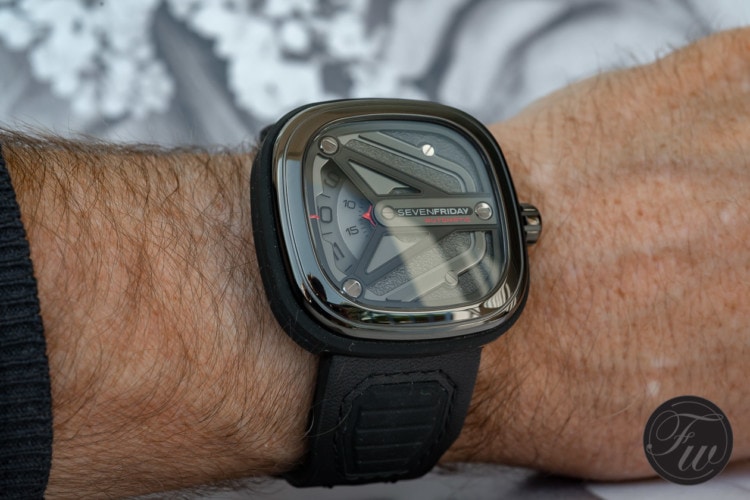 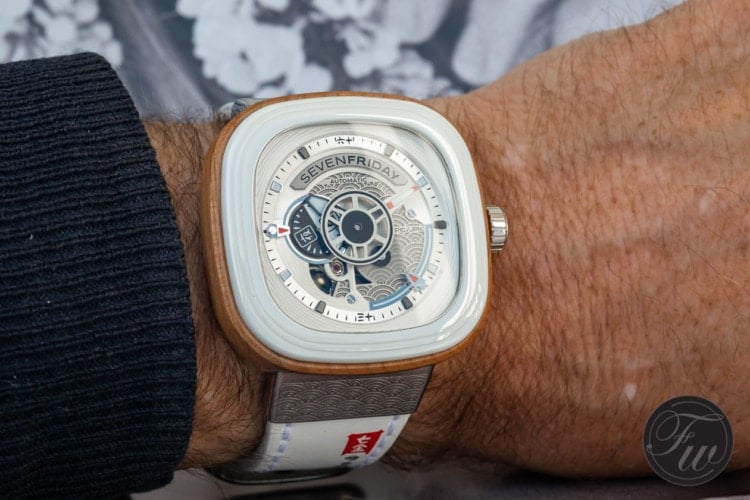 Over the years we did a few SevenFriday articles, the first one was by Balazs in 2014 about two charity models (here’s the link), and the last one, by Robert Jan, was in fact about the introduction of the M3/01 Spaceship model (which is linked here).

Around for only 5 years

Just to freshen up your mind. SevenFriday’s birth was only in 2012, with the first watches hitting the market in 2013. They’re such a brand existing for just five years while you have the idea that they’re around forever. Originated by Studio Divine in Zürich, Zwitserland, SevenFriday took the world by storm as one of the first brands to use social media as an influential channel to promote their watches. 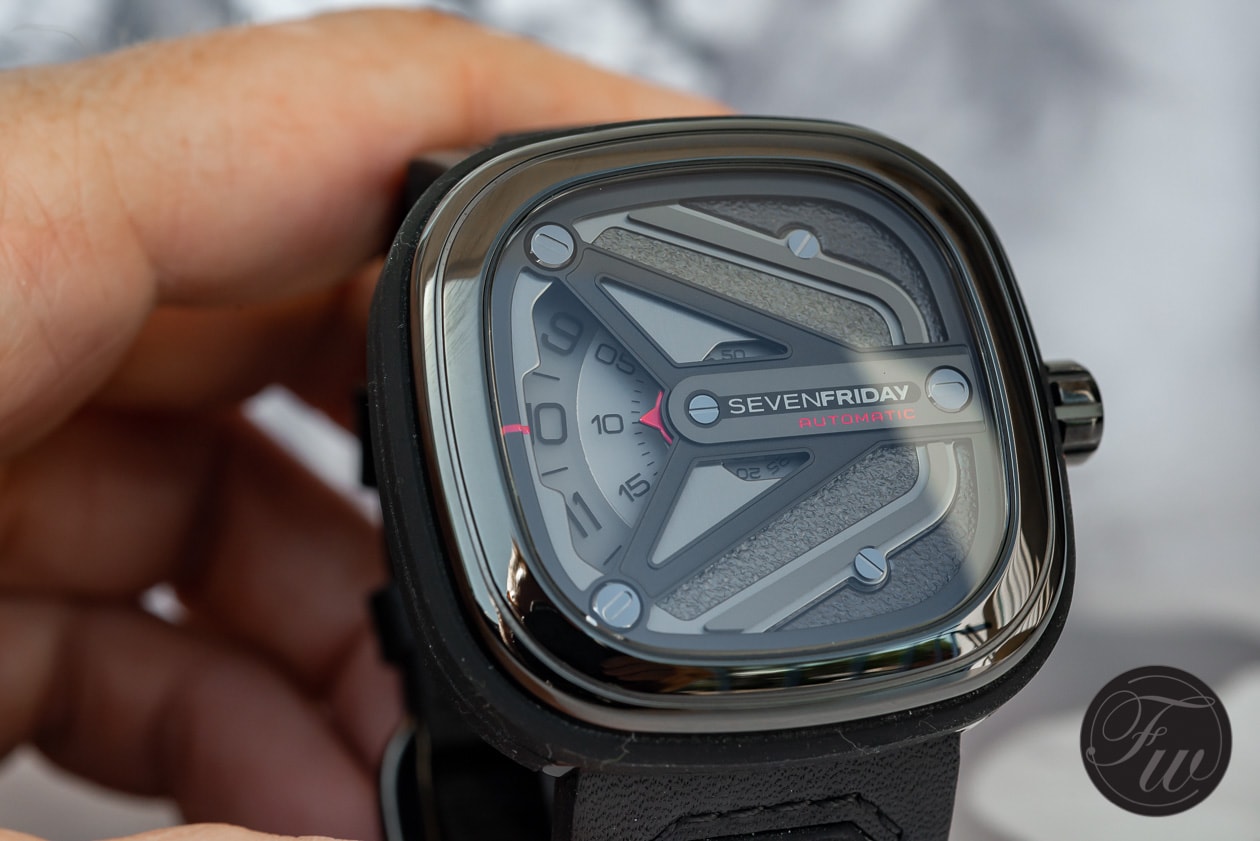 I remember, the now well-known but then just starting, Watch Anish be one of their key promoters. He’s a big name now, with his own print magazine and hats. But in those days it was something new, something people were surprised of that this was happening. Beside many Instagram post, in 2014 he visited Studio Devine in Zürich and produced a nice video which you should have a look at. Even if it was only for the nice background music he used for it. 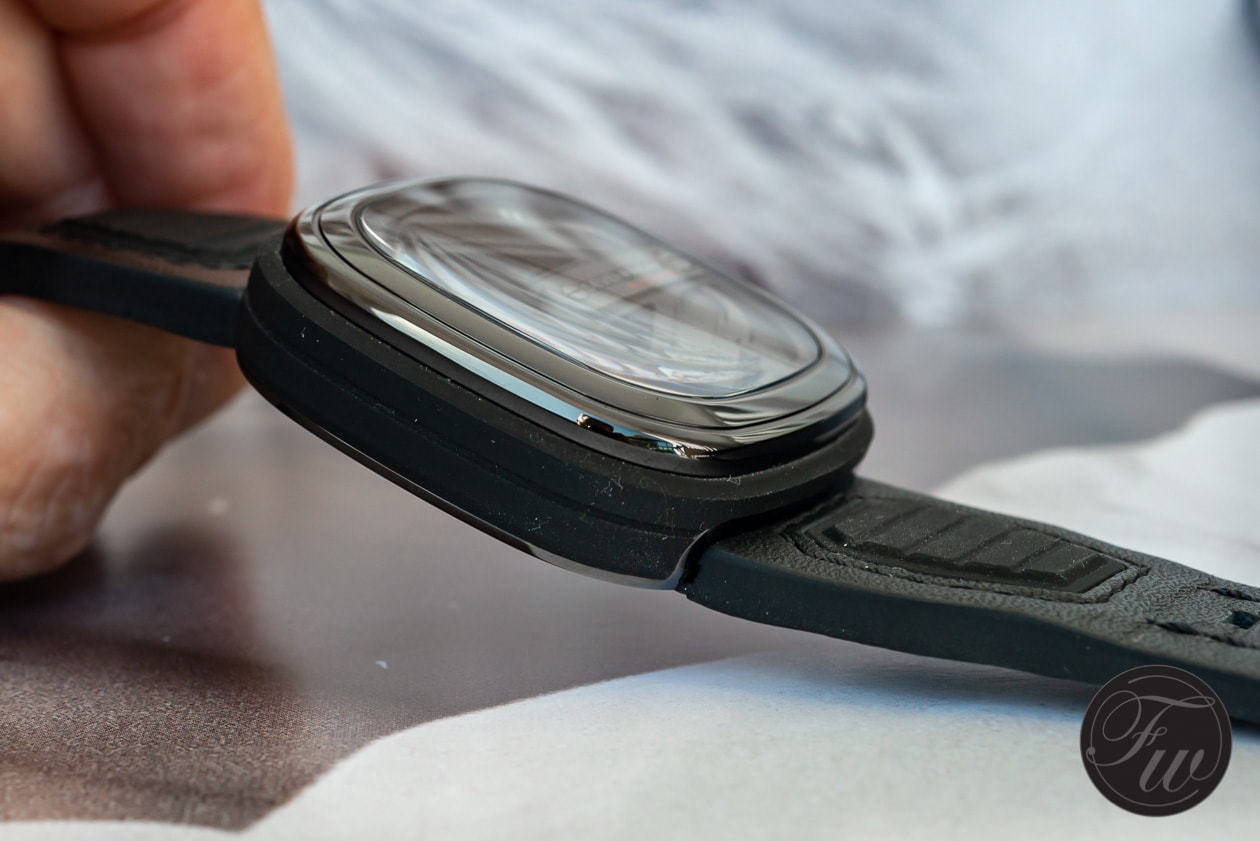 Rubber cladded edge of the casing

Back to our review watches. SevenFriday’s collection consists of several series. M, P, Q, S, V, and Off-series. Every model series has a different kind of movement or at least different time indication. The first watch I’ll have a look at is the M3/01 Spaceship, obviously a member of the M-series.

M-series watches have no regular hands, however, tell the time showing a small segment of overlapping second-, minute-, and hour discs. It might remind you of the mechanical analogue watches which we’ve seen in the seventies of the last century. The multi-level construction, as well as the shape of the dial, adds to the reminiscence of sci-fi spaceships. 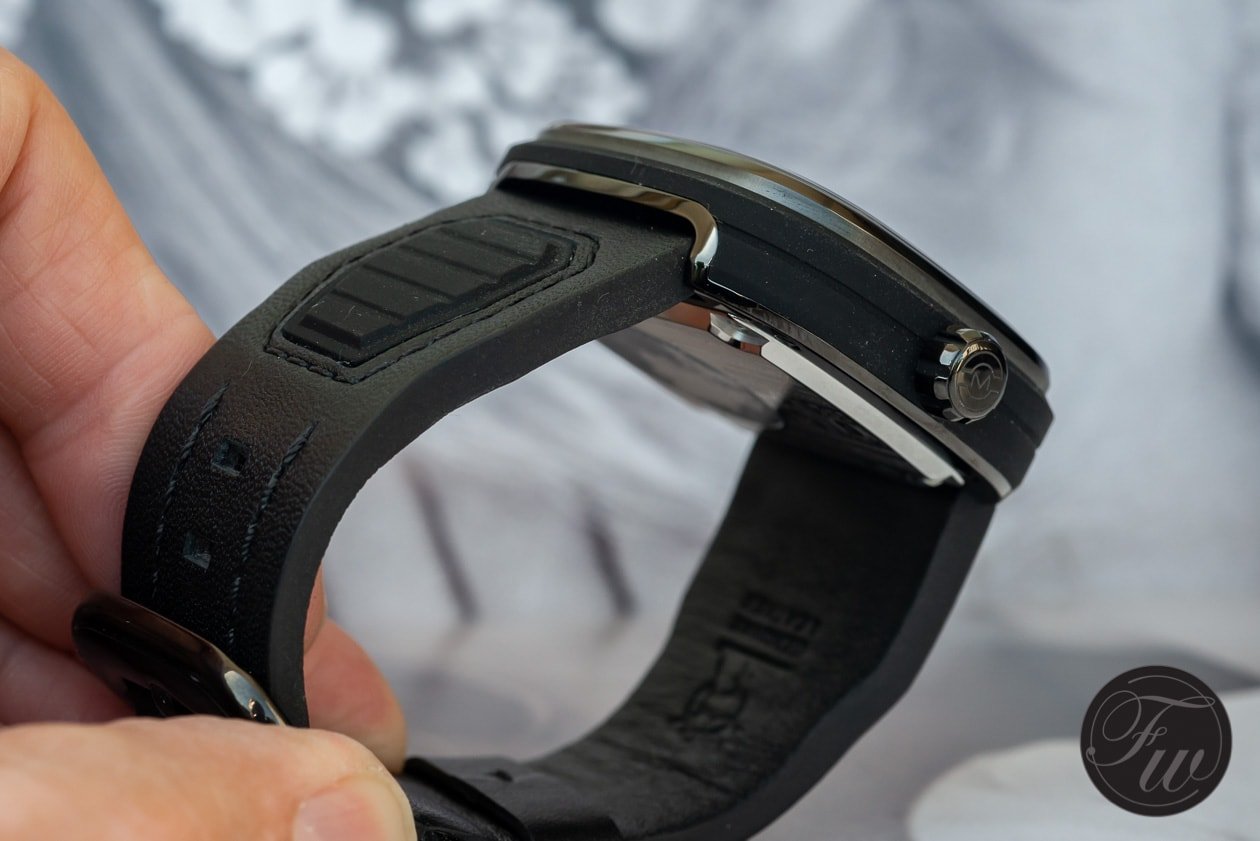 Rather stiff silicone rubber inserts in the strap

The comfort of a spaceship

The strap of SevenFriday Spaceship is made of calf leather in combination with silicon rubber inserts. Looking awesome and futuristic. But the cause of my criticism as well. Probably the strap has to break in somewhat more, still, after some days I couldn’t say the strap was very comfortable. This, of course, could be different with different sizes and shapes of wrists. On my wrist, the wearing comfort wasn’t that good. And I’m quite polite with my words here.

The M3/01 Spaceship edition is powered by a Miyota calibre 8215 movement and has 40 hours of power reserve. The case and bezel are made of stainless steel with a PVD gun metal coating. Pretty much like bumper cars at a funfair, the edge of the casing is cladded with a rubber lining. 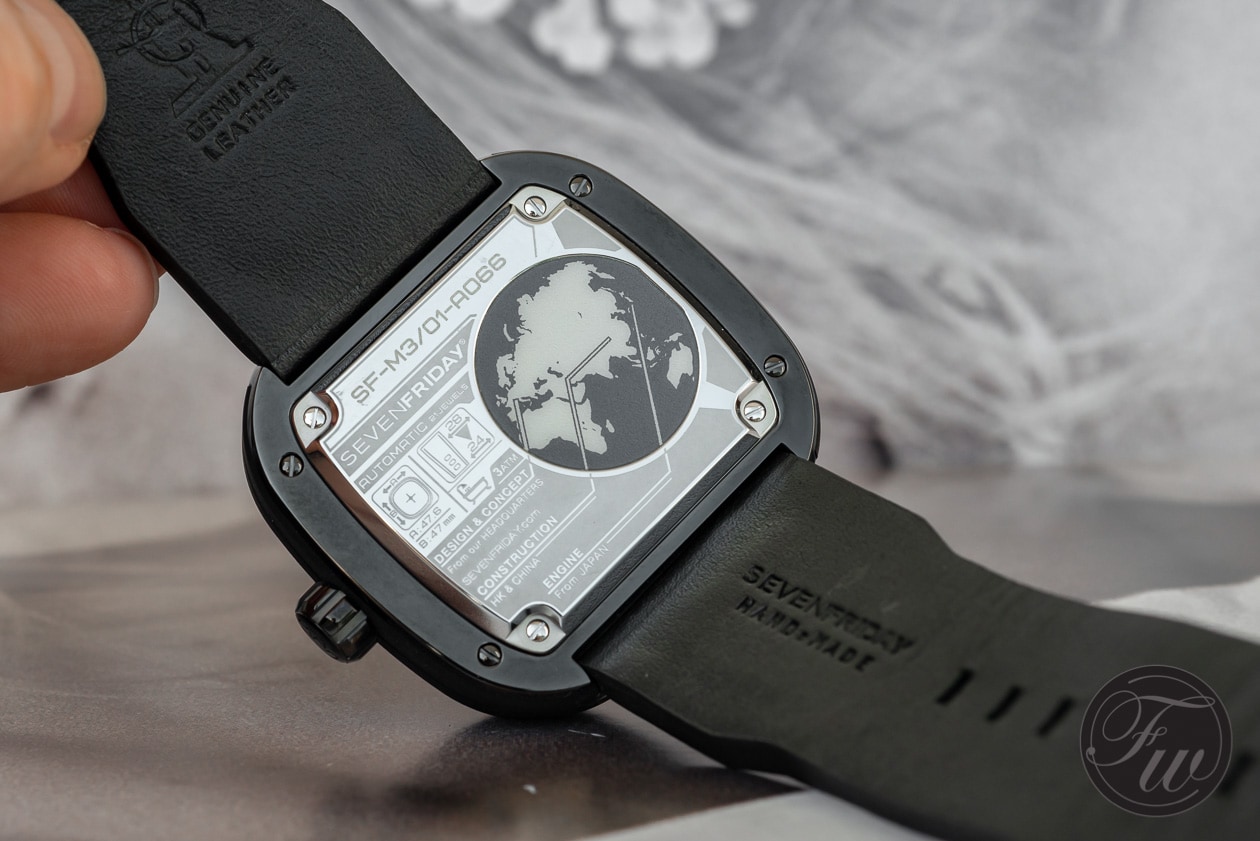 Case back with NFC chip for authentication purposes

SevenFriday has been that popular that their watches have even been counterfeited. To fight these fake watches most of their watches, including the SevenFriday M3/01 SpaceShip, are now equipped with an NFC chip for authentication verification. 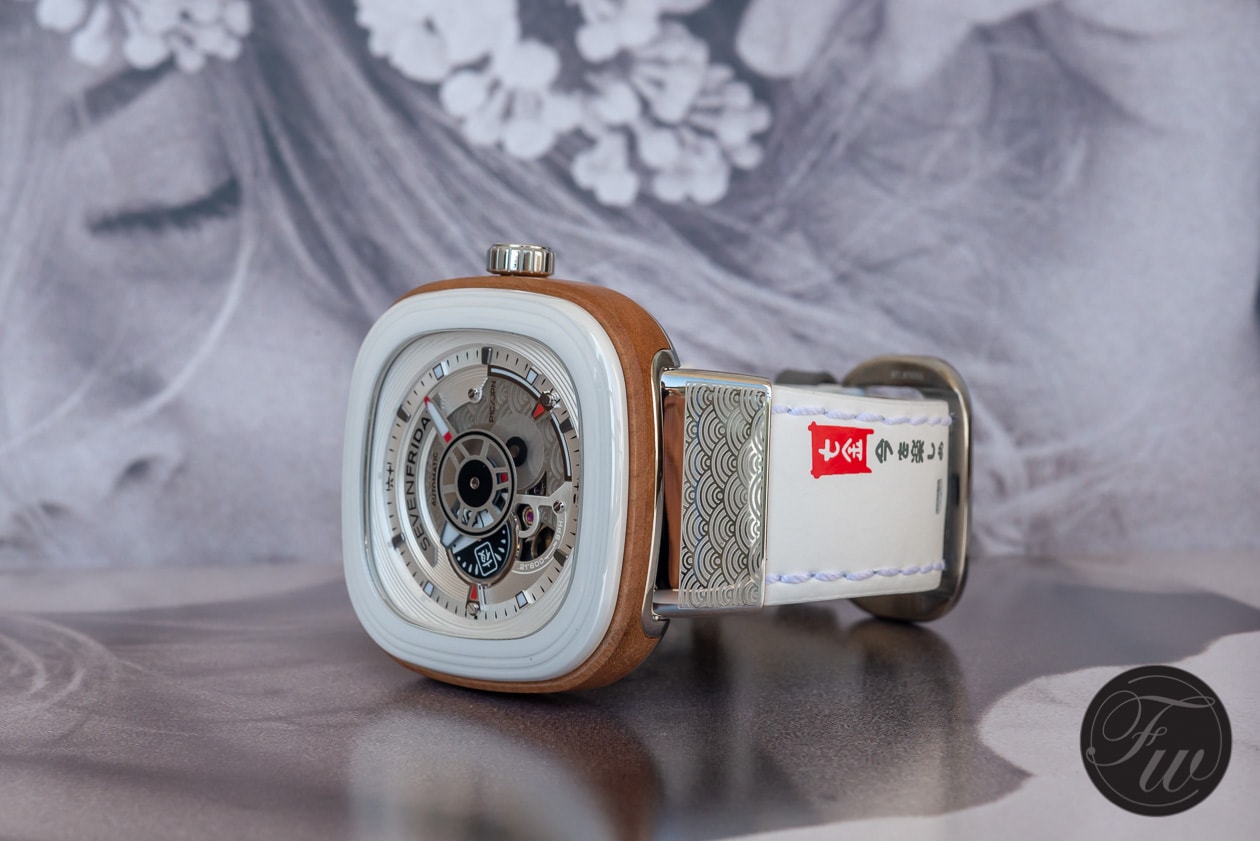 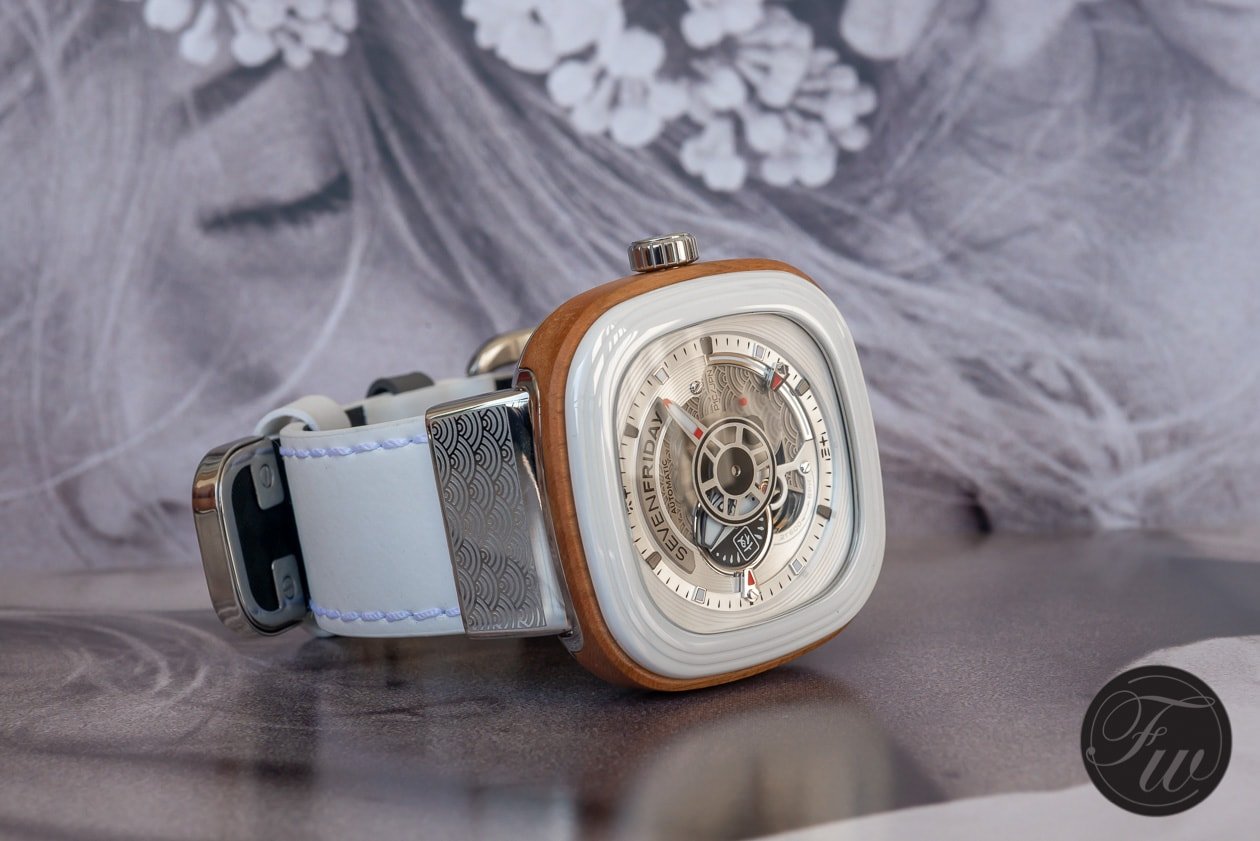 The Japanese text in red and black is very present on the virgin white leather with silicone rubber strap. The SevenFriday logo in red, and the well known saying ‘Seize The Day’ written in Japanese characters in black. Both ends of the strap at the side of the casing are made of metal, engraved with a continuous wave pattern indicating the iconic Mount Fuji.

Reflecting the porcelain used in ancient tea ceremonies the SevenFriday P1B/03 Japan has a white ceramic bezel. Its dial is made of multi-level rhodium and transparent discs. The cherry wood casing outer ring is a nod to the world famous annual Cherry Blossom Festival. 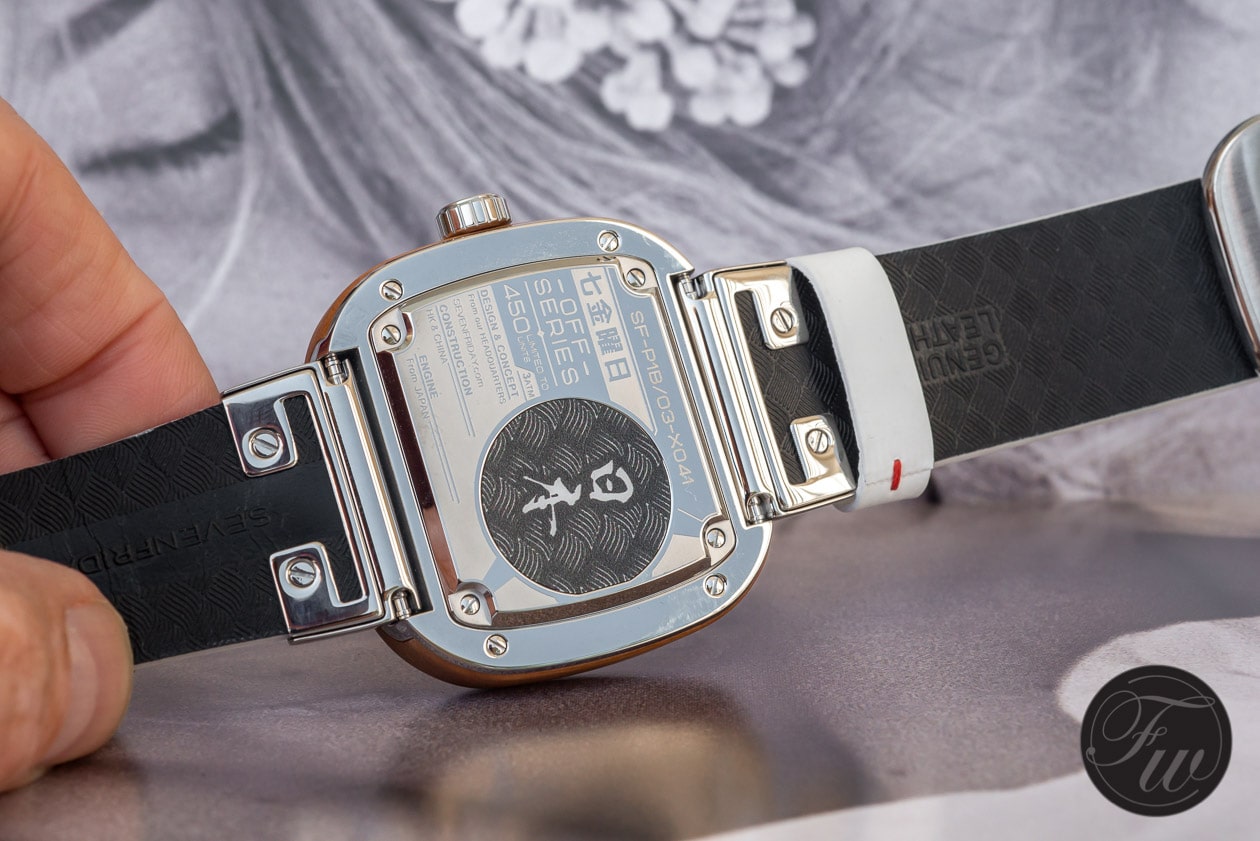 What didn’t become very clear to me is why there’s P1C printed in the dial, while the reference of this Japan model is P1B. 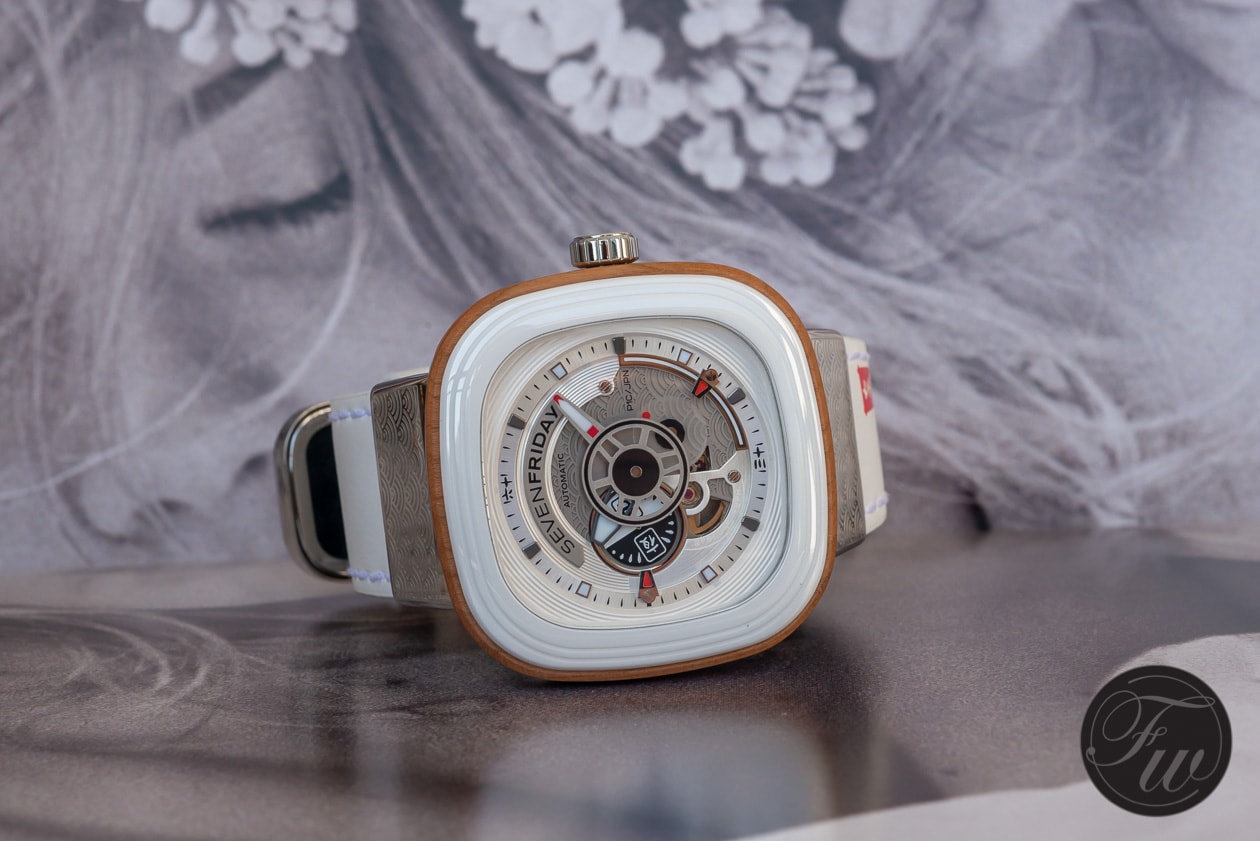 The P1B Japan model with P1C/JPN printed in the dial…