The Sinn 103 is a classic. And this classic just became better with the limited edition 103 Sa B E version that was introduced at Baselworld last month. It didn’t take long for me to consider adding this watch to my personal collection and that does not happen often.

I often feel like a kid in a candy story at Basel during the annual fair, but as you know there’s only so much that one’s wallet allows. Although I loved gazing at the latest Patek Philippe Nautilus or Rolex GMT-Master II in Everrose gold, there are definitely limitations on what I am able to purchase. This is why I also love to look at watches that are more realistically priced for us ordinary mortals. And that’s even relative of course, as €2590 (that’s the retail price for this new Sinn 103 Sa B E on leather) is already a lot of money for many.

I’ve already given it away, but this limited edition Sinn 103 Sa B E made a huge impression on me, and the rest of the Fratelli. Our photographer Berti also couldn’t really hide his enthusiasm during the product meeting with Sinn and I noticed that in his thoughts he was busy counting his coins. 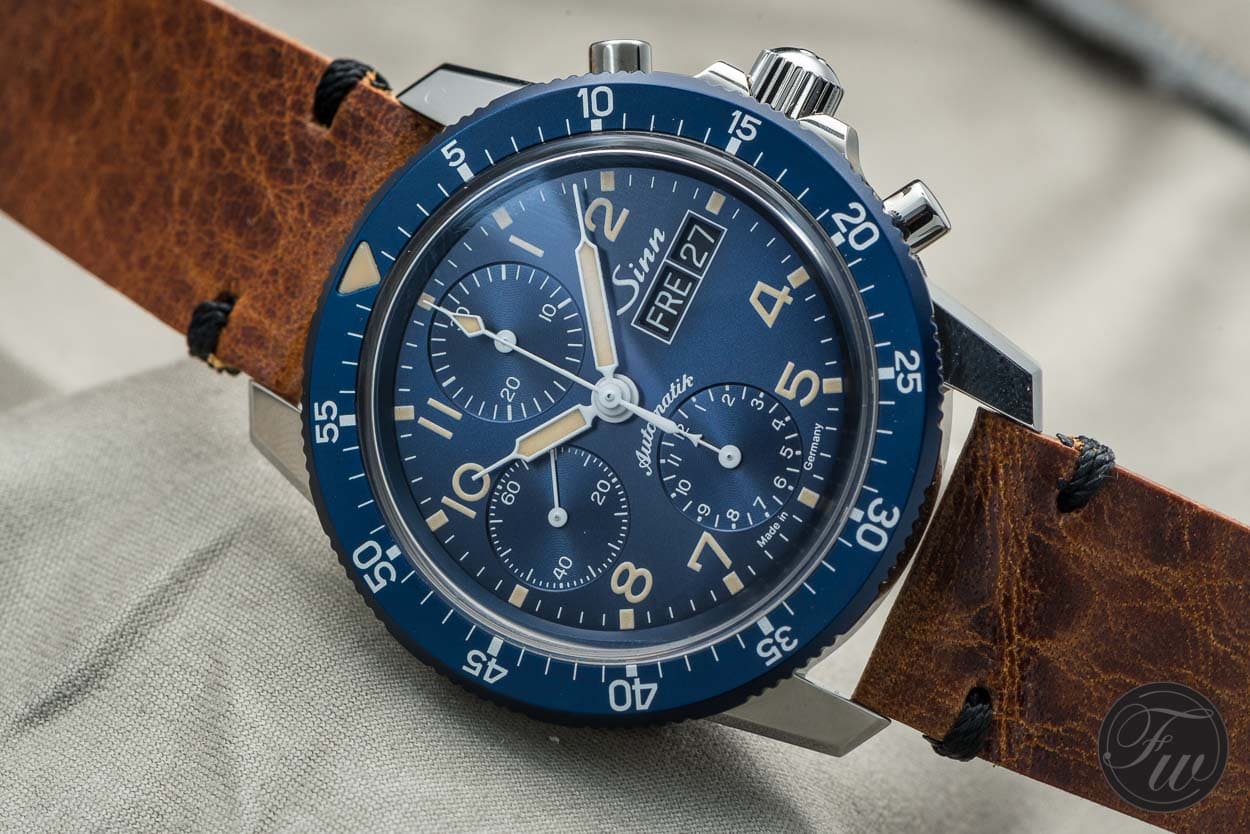 But what makes this Sinn 103 Sa B E or blue Sinn 103 so special? Why is it so different from the classic black Sinn 103, which I’ve never considered purchasing? I always thought I was immune for new watches where color is the only change, but the Sinn 103 Sa B E proved me wrong.

The Sinn 103 Sa B E is powered by an ETA/Valjoux 7750 movement and that is, for example, one of the reasons why I’ve never considered a Sinn 103 for my own collection. Don’t get me wrong, the 7750 is a nice and solid movement, probably even better than the long discontinued rival Lemania 5100 movement, especially when it concerns reliability, but I just really dislike the famous 7750-wobble. The 7750 winds in only one direction, meaning the rotor has one direction in which it rotates ‘freely’. This goes with such a speed, that the movement starts to wobble. Some people love this sensation and makes them feel as though they are wearing something mechanical. To me it just feels wrong as if the construction just isn’t properly engineered. But that is just what it is, a feeling. So it is completely subjective and perhaps a bit of an emotionally driven thing, but that’s the main reason why the Sinn 103 never made it to my collection. The only 7750 I own is a Seamaster Professional Chronograph from the 1990s and that’s for one reason and that is that my late friend Chuck Maddox considered this to be his favorite modern wristwatch. So I have a 7750 powered watch, but only because the reason of ownership was and is more important than my allergy to this Valjoux movement. 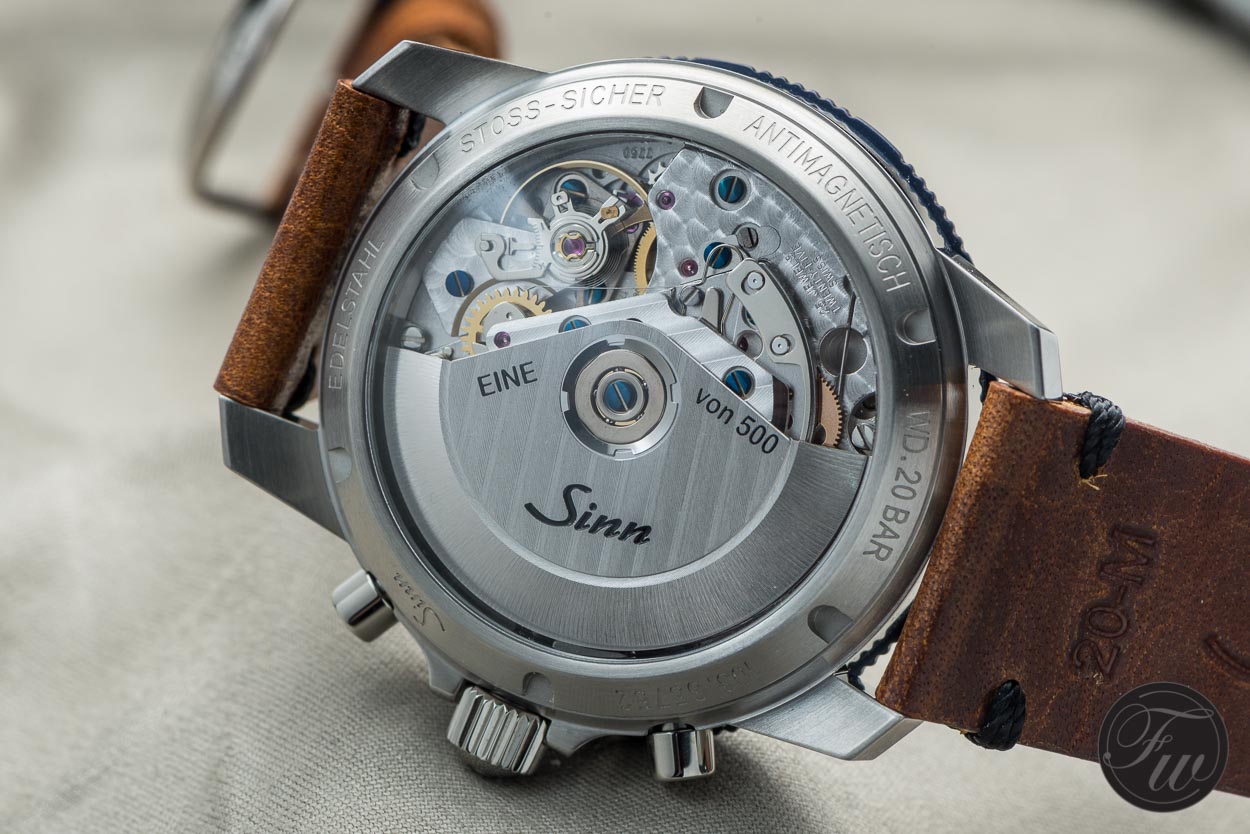 That said, the Sinn 103 Sa B E made me forget about this. The blue bezel, but especially the blue sun burst dial, or ‘Sonnenschliff’ as my neighbors in the east call this effect, is just mind-blowing. Not only did Sinn use some color for the dial and bezel, they also added some faux-patina to the hour markers and hands.  Oh, and for the triangle on the blue bezel. Now I realize that some of you are very much against faux patina, or creating the illusion that something is vintage while it really is not, but from an aesthetics viewpoint I have to say that it does look good. Luckily, for those who are against, there’s quite the line-up of Sinn 103 models that have Prodent white hour markers and hands.

Furthermore we read the day and date on the dial, in German of course (Dienstag (Tuesday) 24 as shown below), there’s ‘Automatik’ on the dial which needs no further explanation and the fact that this watch is made in Germany – in Frankfurt am Main, where Sinn just opened their new HQ (or ‘Stammsitz’ as they call it). The blue anodized bezel rotates in both directions and the triangle will lume in low-light conditions. Two important (TESTAF) guidelines for a pilot’s bezel are that it can be operated wearing gloves and that it rotates in both directions and has at least one luminescent marker. Check. 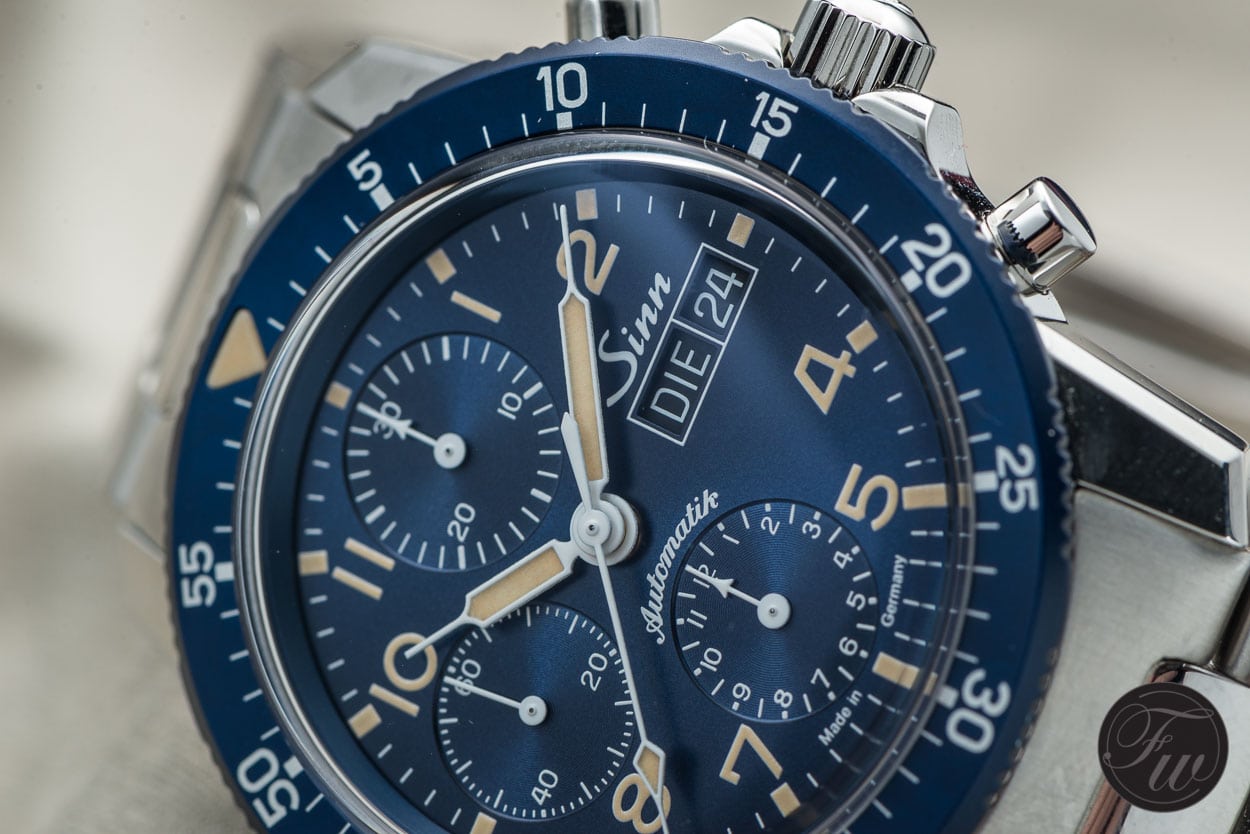 Sinn develops and produces mainly toolwatches, or at least where form follows function. That’s very German, and that’s what I particularly like about Sinn. The Sinn 103 is no different. It’s a no-nonsense chronograph that can already be purchased at €1550. By selecting specific options (or features), you can end-up at almost double this price, but that is entirely up to you. The most basic model comes on a leather strap and has a plexi crystal and a solid caseback. This limited edition, of 500 pieces, the Sinn 103 Sa B E reference, retails for €2590 for the version on a leather strap. Sapphire crystals on both sides of the watch are included (this already adds €600 to the basic price of the regular Sinn 103). 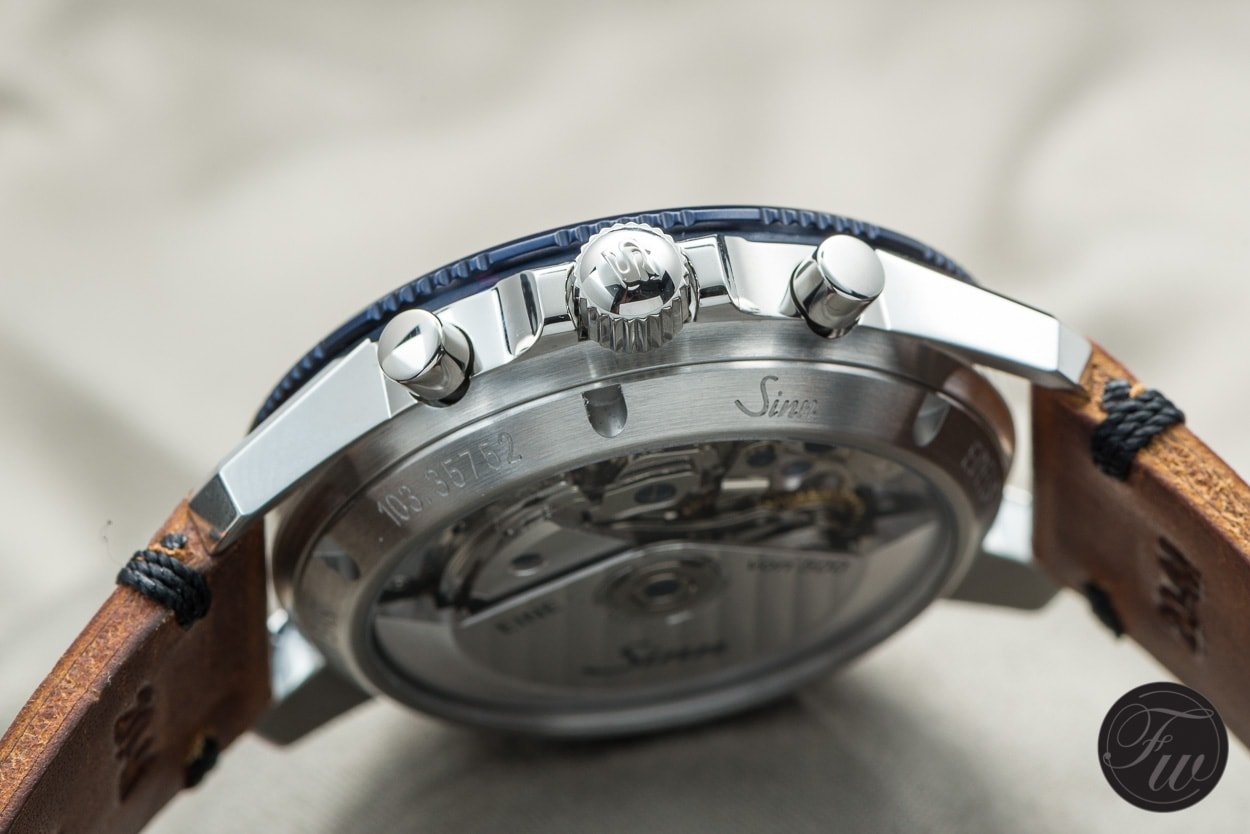 The main specifications or features of the Sinn 103 Sa B E are equal to the basic Sinn 103. It has a diameter of 41mm, a thickness of approximately 16mm, lug-width of 20mm, same finish on the case (and optional bracelet), 200 meters of water resistance as well as the 7750 movement. Frankly, if you’re into specs only, the standard 103 might give you the best price/quality ratio. This special version, however, adds the beautiful blue bezel and dial to the game of course, as well as ivory-colored hour markers, bezel triangle and luminous material in the three central hands of the watch. Furthermore, this watch will be only produced in a limited quantity. As you can see on one of the images above, it is limited to 500 pieces only. This is marked with ‘Eine von 500’ on the weight mass of the 7750 movement. There’s no unique number, which I kinda prefer to be honest. But there’s something to say about doing a limited edition numbering this way as well. There’s no hassle with number reservation and individual engraving, although I am pretty sure that this can be automated these days. There’s only one real downside: you never know if a brand actually produced 500 pieces. Perhaps it is more, perhaps it is less. With Sinn, I am pretty confident that 500 = 500, but I’ve also seen brands in the past that made me doubt if they ever got to the total production number. In any case, this ‘One of XXX’ instead of a unique number certainly would not be a dealbreaker to me.

If you prefer to have a stainless steel bracelet on the Sinn 103 Sa B E, add €170. When we had our meeting with Sinn in Basel, they referred to it as the ‘massiv band’ which translates into the ‘solid bracelet’. I wondered why they did so, but did not ask (you only have so much time). I later on asked Gerard, who was a Sinn agent in his former life of (authorized) watch dealer and he explained to me that in the (far) past, Sinn had two types of stainless steel bracelet. Folded ones and solid ones. The folded ones didn’t survive in the end, as requirements and demand for quality increased, but the solid bracelets stayed of course. And somehow Sinn still refers to their stainless steel bracelet as ‘massiv band’ themselves, even on their website it is displayed like this. I find this kind of internal referencing that historically grew this way, and still being used, very charming to be honest. Anyway, you can also order this Sinn 103 Sa B E on a silicon strap, by adding €165 to the price. You can choose from a variety of blue silicon straps with two different clasps (long and short). The website also offers the choice of black silicon straps, being cheaper. As for the stainless steel ‘solid’ bracelet, the website also offers the finer linked bracelet that shows some similarity to Breitling’s typical Navitimer bracelet. I probably would settle for the regular stainless steel bracelet and order an extra leather strap. Somehow the blue silicon strap is more for divers watches. 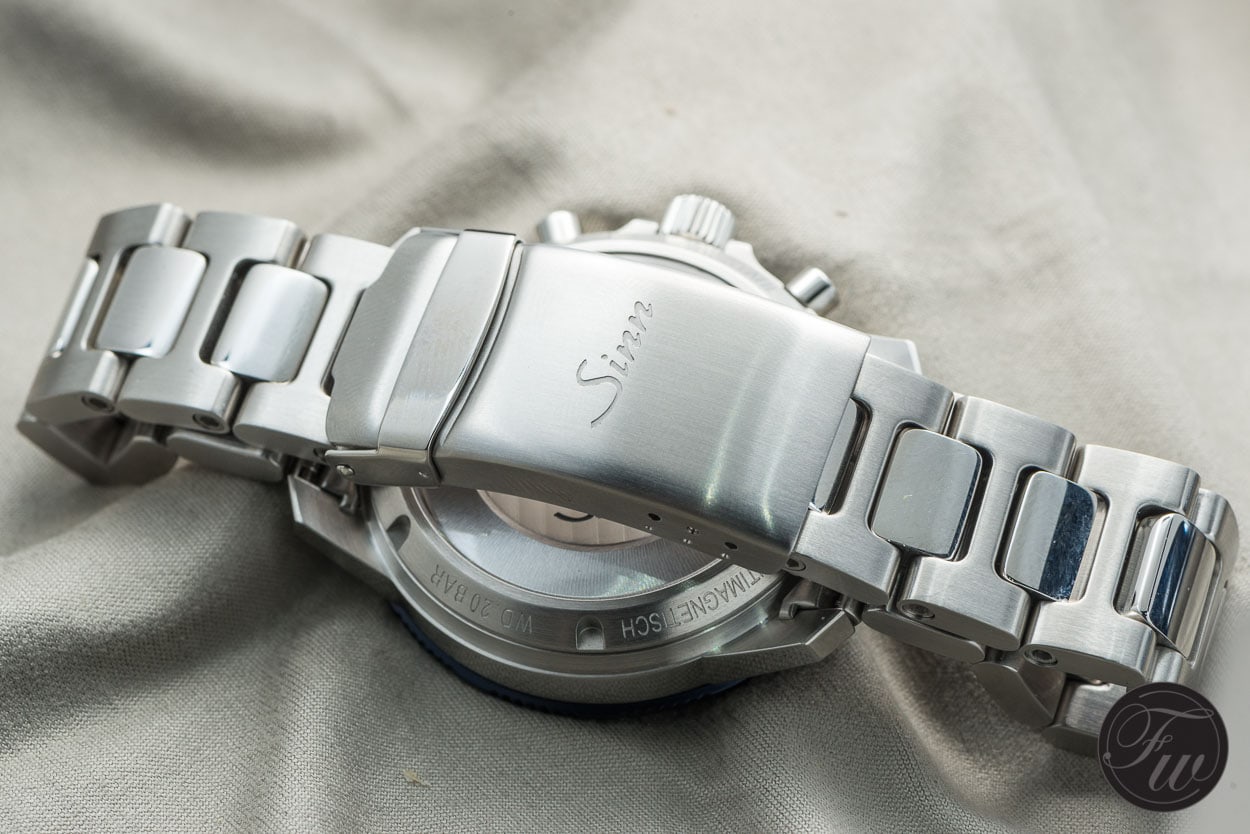 As you can read I am pretty enthusiastic about Sinn and about this new blue 103 edition. I see and have seen a lot of watches, but Sinn always amazes me with the quality they offer for the money. It is my job to translate the real life experience of handling this watch – and thus be able to judge its build quality and finish for example – into words for an article like this. The Sinn 103 Sa B E is priced somewhere between €2590 and €2760, depending on the type of bracelet or strap you choose. Compared to other brands who offer watches in this price category as well, I feel that Sinn offers very good value. Additionally, I see some brands that produce similar styled watches and are supposedly in the same league, have retail prices above Sinn and offer less quality. I’m not making friends here perhaps, but what the heck, I am being honest; Tutima and Fortis have watches in the same style but simply can’t top this Frankfurt brand when it comes to build quality and finish while sometimes they even charge more. How the watch case is finished, how the bezel functions (with little to no play), how operating the pushers and crown feel, the quality of the strap and bracelet, and so on, after handling many different watches: there are a lot of differences to experience between brands. Last year’s Eterna Kon-Tiki that I bought, same thing. If I had known that the Sinn 103 was coming out in this amazing blue dial version, I would have kept my money. You win some, you lose some. The other watch brands mentioned aren’t bad at all, but Sinn is the winner for me. 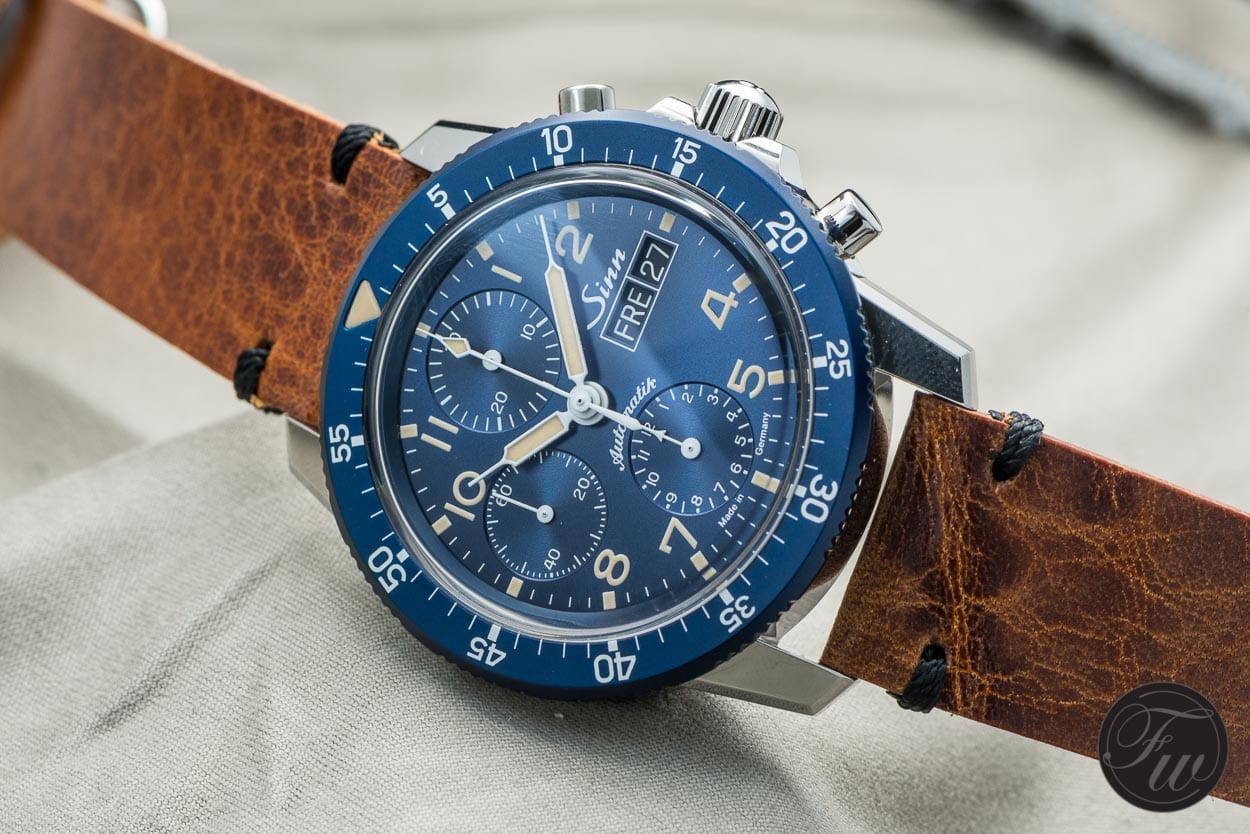