Here is the first round this weekend on the Speedmaster World Cup Semi-Finals. In the quarter-finals, we saw the Speedmaster Snoopy 2015, the Tintin ultimately dominate their match-ups for the win. Some groups had clear winners, others showed a proper fight.

In the Semi-Final 1, we will see a battle between the reporter and adventurer Tintin and NASA’s watchdog Snoopy. Both cartoon characters, but with the difference that one didn’t make it on the watch due to a tough crowd that watches over Hergé’s heritage and one that did make it to the watch, Snoopy. In the latter case, the cartoonist Charles M. Schulz that came up with Snoopy was a big supporter of NASA’s race for the Moon. He officially let NASA use Snoopy from Apollo 10 onwards. 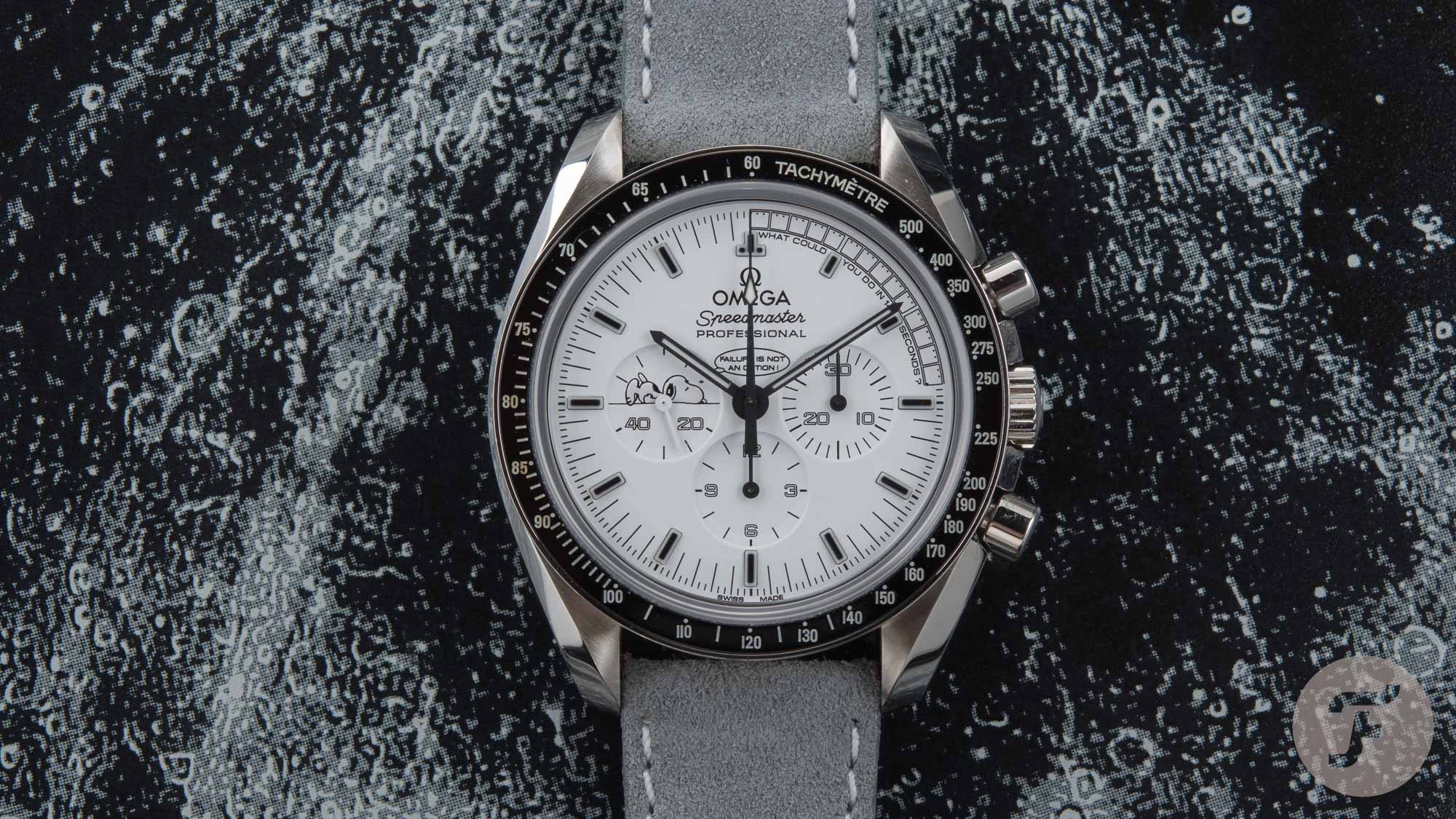 I have said a lot of things that needed to be said about this watch in the first two rounds. Let’s not look back too much on the fights it had to put up (and won them without proper resistance). In these semi-finals, things will get tougher on this dog. I also assume that in the end, it is not about the things we say to convince you, but the Speedmaster itself. The Omega Speedmaster Snoopy from 2015 has become a bit of a grail to many Speedmaster collectors out there. Even in our team, I was the only one able to secure one back in 2015. So now, we find the Silver Snoopy Award taking it up to the Tintin from Mike’s group. 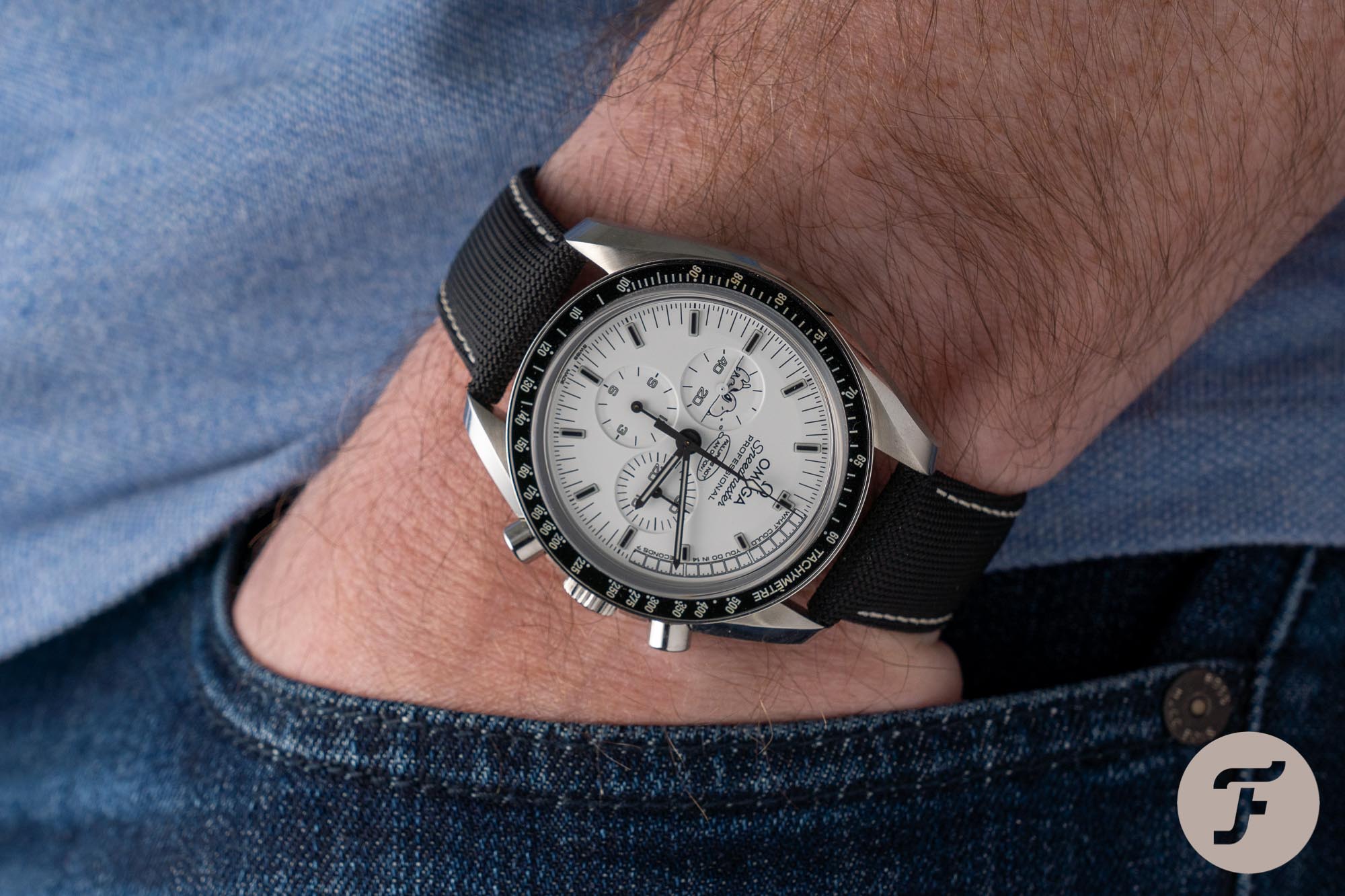 I happen to own both watches, I actually happen to own all of the watches that made it to this round. It is not meant to be snobbish in any way, I just collect Speedmasters and I love all watches in this Semi-Finals group. What I am trying to say is: it does give me the advantage to tell you about these watches from an owner’s experience.

And I am not going to lie to you: I never wear my Tintin. It is an interesting watch, of course. A bit of a failure, you could say, and that combined with the fact that this watch only got demand after its discontinuation does give it some “street cred”.

I bought mine in 2017 when I was in Japan, it just sat on this display at BIC Camera. A chain of stores in Japan where they sell everything from toothbrushes to golf clubs to cameras and — indeed — watches. After showing my EU passport, I even got an additional 5% discount on the staggering price of €2,350. I thought I would love it, but I don’t. I don’t hate it, and it deserves its place in a Speedmaster collection, but I am simply amazed it won over the Alaska Project watch. It makes no sense. Anyway, to others – like Mike – the Snoopy 2015 doesn’t make any sense. Especially if you have nothing going on for a comic character on a dial. But let’s talk about the Snoopy for a moment. 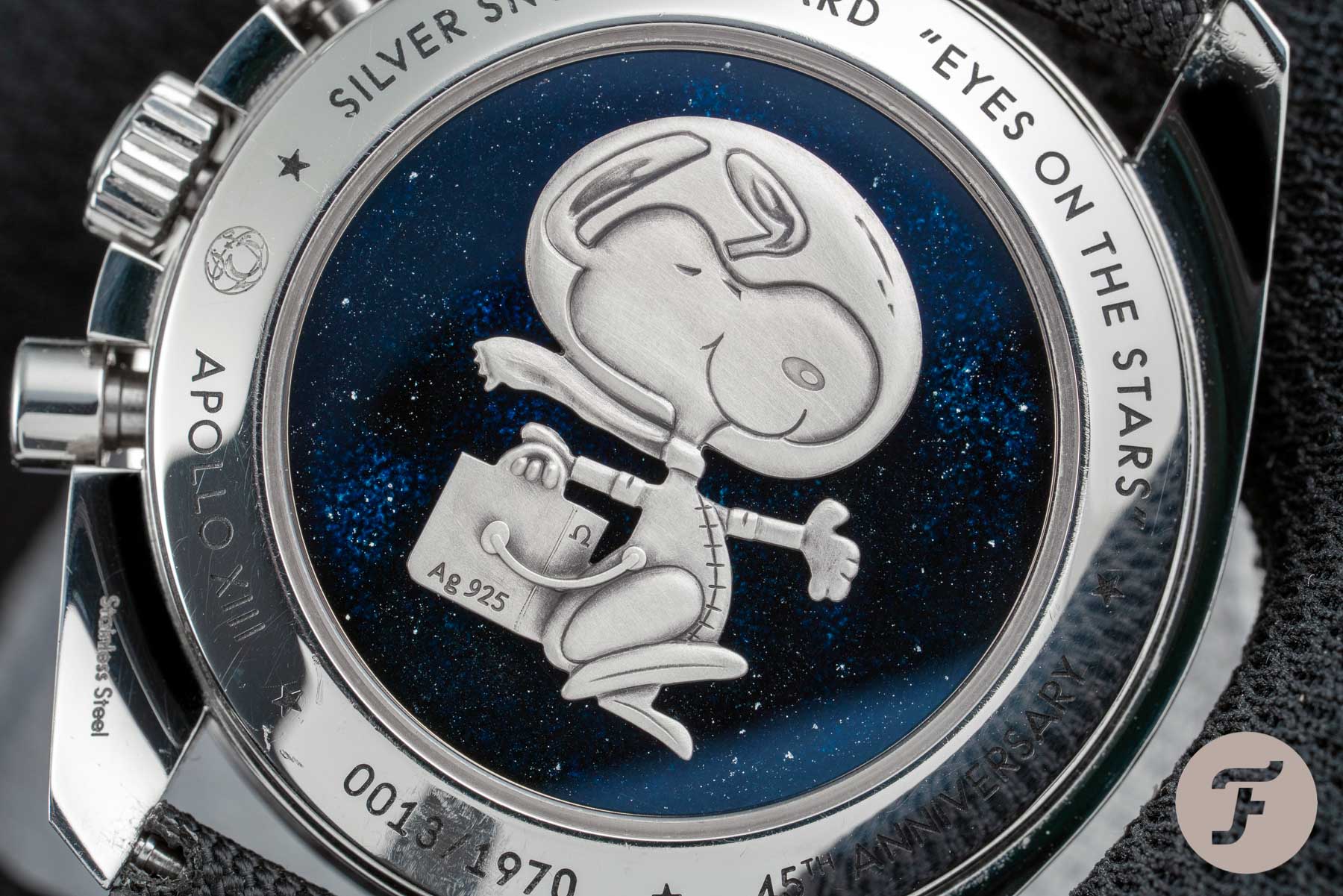 What sets the Snoopy watch apart in my book compared to (most) other limiteds, are two things: 1) the case back is hand-made: a silver lapel pin on a blue enamel background with silver powder. Making each of them unique. And 2) It was the first limited edition Speedmaster that was so incredibly detailed in its execution.

Whether you like to have a comic character on your watch or not, there’s little denial that Omega did an excellent job here. It sold out even quicker than Speedmaster Speedy Tuesday watch. Of course, in the end, that is not very relevant as you just want to wear the watch. I am not particularly a fan of Snoopy itself, although I love comic books, Snoopy never had my interest. What I do like, is the connection between Snoopy and NASA. 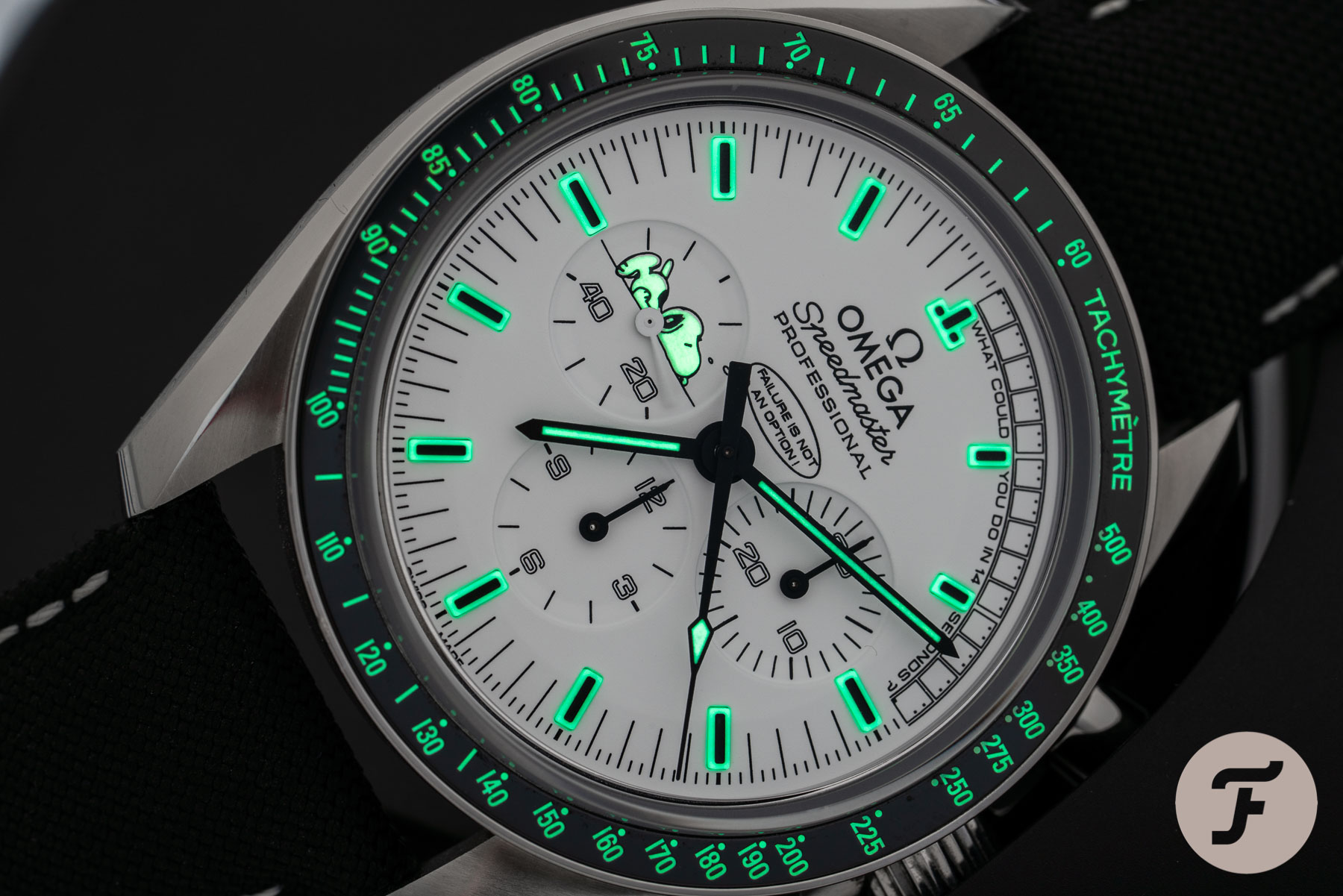 By the time the Apollo 10 mission rolled around, Snoopy was already the talisman of the crew. Later on, Snoopy was used for the award certificate (together with a (flown) Snoopy lapel pin) for NASA’s staff and contractors who did something extraordinary. And I don’t have to tell you (again) what the Omega Speedmaster did for the Apollo 13 crew in 1970 (it can be read here if you’re not familiar with the story).

Sometimes I see people (including my colleague Mike) complaining about a comic character on a dial. “It is childish“, they say. And then quickly refer to their academic title or grown-up job at some boring 9-5 job where they have to drink awful coffee. Dude, nobody there cares about the watch you are wearing. Have some fun! A fun watch like this Snoopy from 2015 (or even the Snoopy 50th anniversary model with the automaton on the case back) will compensate for cooping with Excel sheets, bad coffee, stories during lunchtime about IKEA visits on Sunday, etc.

Trust me, I had a normal job once too. Don’t take yourself too seriously, and if you’re afraid that a little — almost invisible from today’s mandatory physical distance — dog on subdial will make you look bad in front of colleagues or clients, there’s probably something to work on when it comes to self-confidence. 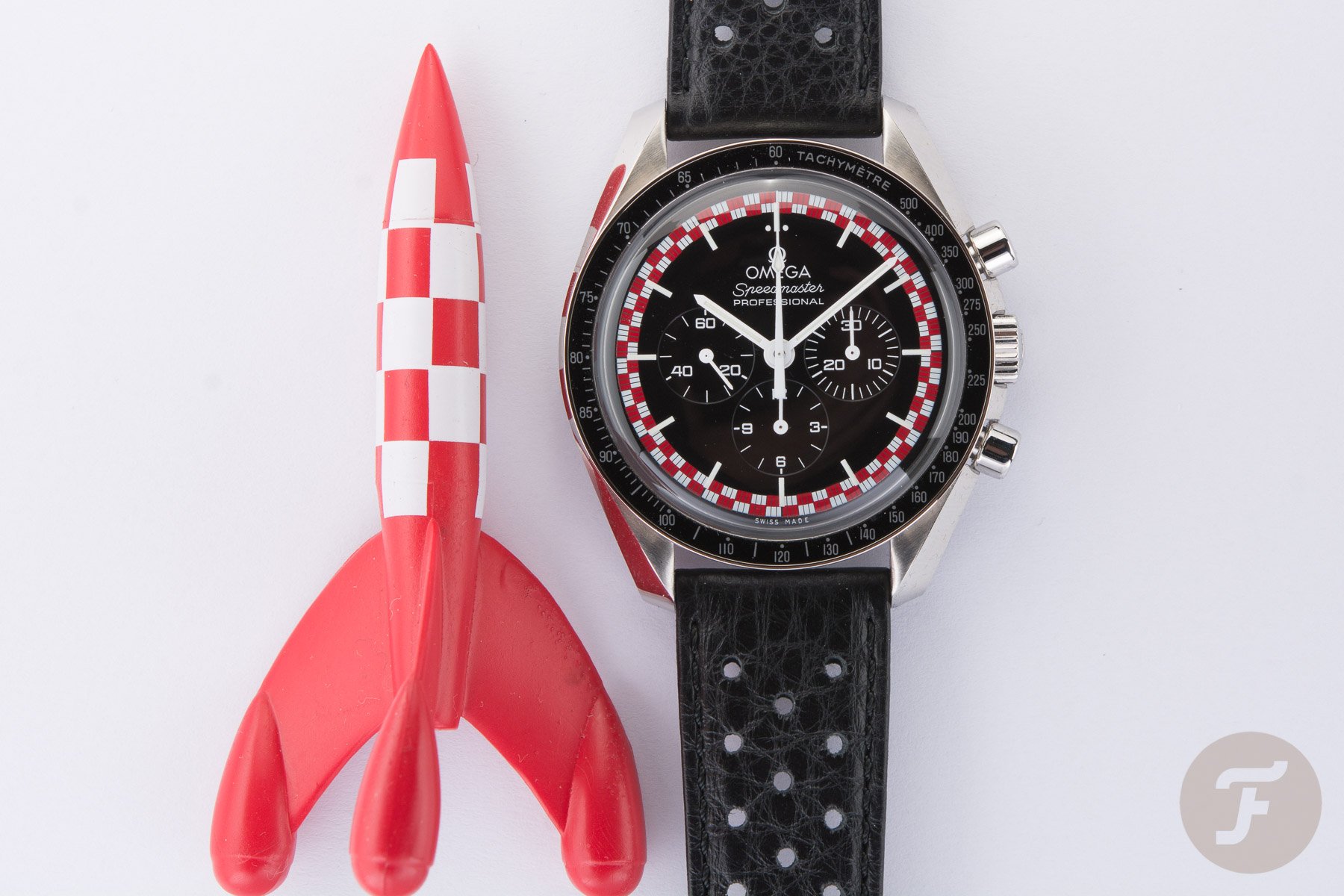 After a touch-and-go battle versus a cagey foe in the Alaska Project 2008, the Tintin pulled out a convincing win in the end. Now, things become monumentally difficult because the Speedmaster Tintin faces off with one of the favorites, the 2nd Snoopy rendition. I know that the Snoopy is a fan favorite and this will be a Herculean task for the Tintin, but I think my favorite red and white Speedy has more than a puncher’s chance. Why is that? Well, let me tell you and going through the normal motions of a day like yesterday is the perfect example.

You see, when I woke up yesterday, I took a shower by myself. I also managed to shave and get dressed without my mommy’s help. Later, after making a cup of coffee instead of drinking some “Capri Sonne” out of a non-spill sippy cup, I left the house on my own and got into my own car to go to work.

And, imagine this, I didn’t get into one of those “Little Tikes Cozy Coupes”. No siree, I got into a proper car and drove to work where I have a proper job doing all sorts of tasks that require schooling and higher level training. Now, why do I tell you this? I tell you this because, folks, I am an adult and there is no way in Hades that you’d catch me wearing a watch with a cartoon character on my wrist while performing all those grown-up tasks that most of us refer to as “regular life.” In fact, I just so happened to be wearing my Tintin. 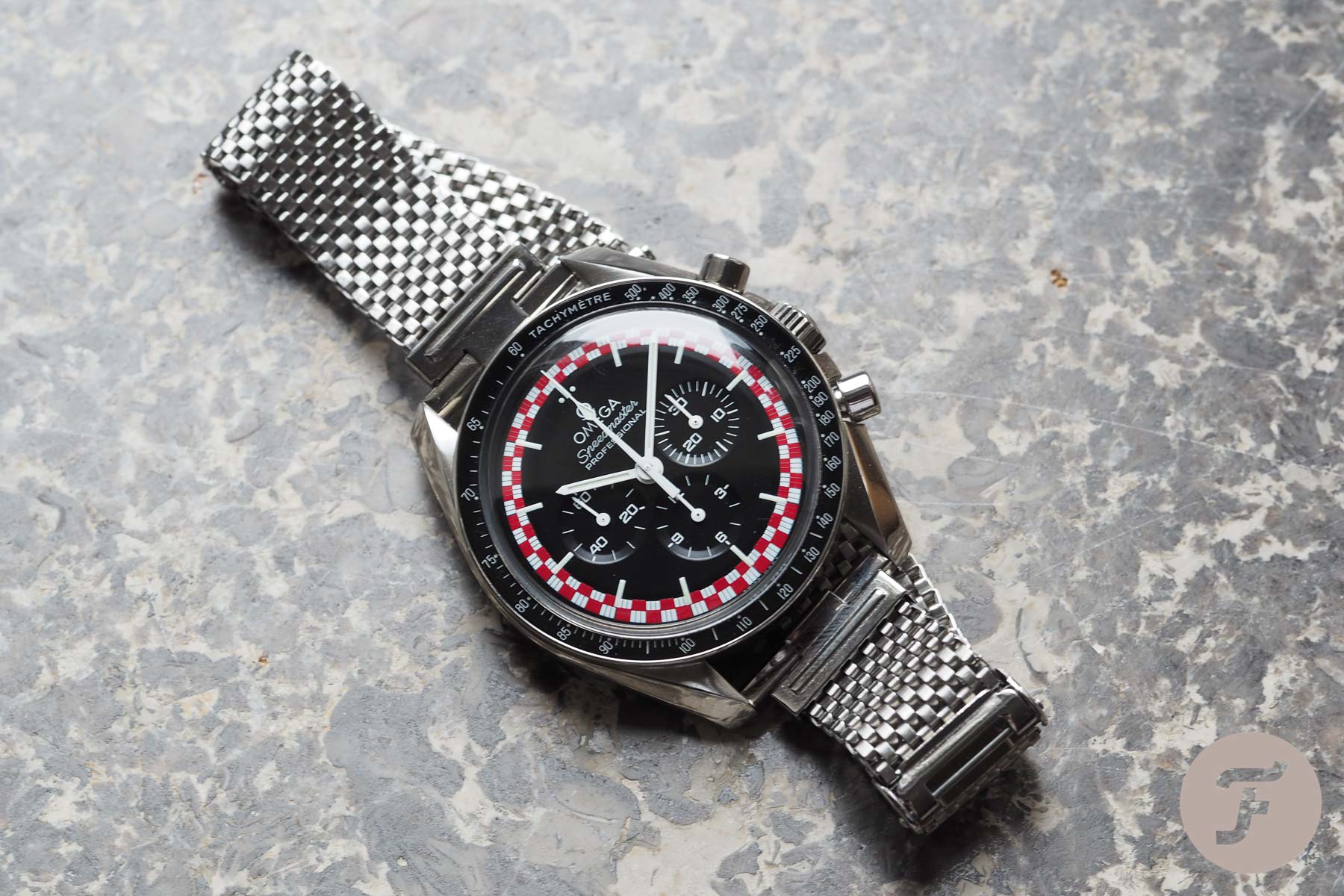 It’s ironic that the Tintin was indeed headed down a similar path of childishness as the doggy dial watch. Thankfully, descendants of the Hergé family acted like most descendants and made a dumb decision not to go ahead with a reputable brand like Omega. No, they went for some crummy licensed plastic watches instead. But their foolishness is our gain because I would most certainly not put on my big boy pants and tote around some kiddish rocket-festooned multi-thousand Euro chronograph. And this is exactly how I feel about the Snoopy.

Look, I get the whole reason for the Silver Snoopy award and it’s a wonderful story. I’m even ok with a canine on the case back. The problem with adorning a dial with a Peanuts character à la the Snoopy 2015 is that it just looks too gimmicky. It reminds me of those cheesy shops in London selling all sorts of royal paraphernalia. Why not buy some silver Snoopy dishes, salt shakers, or a throw pillow while we’re at it? The other problem I have with these watches is that they’re no longer truly special. In a very “Hergé-esque” move, the Charles Schulz offspring have also lent their characters out to every brand under the sun. Undone, Timex, and loads of other fun (read: inexpensive) watches now allow you to get your doggy dose — and even on a white dial! 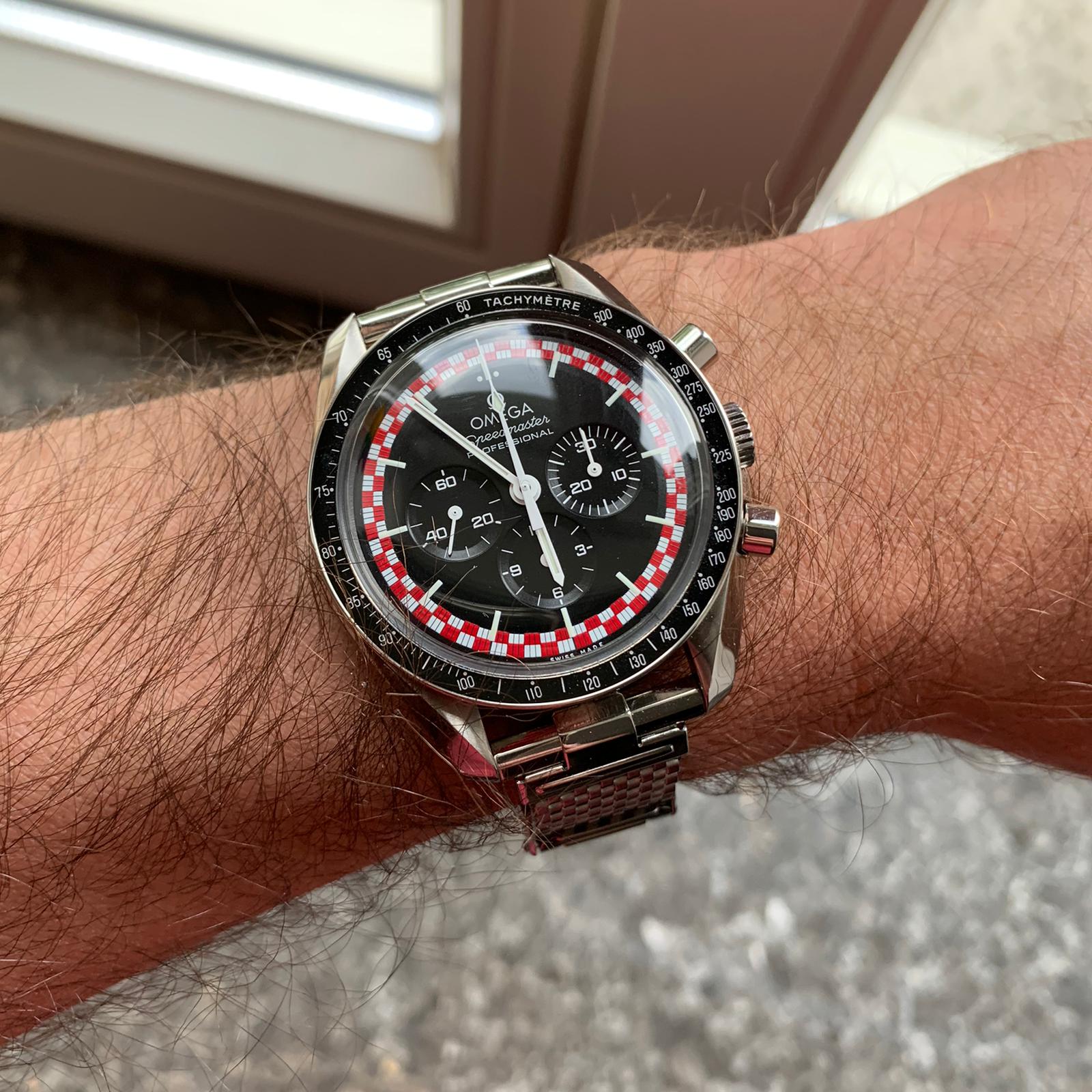 I’m sorry if it sounds like I’m trying to make a good dog go bad, but it’s simply the way I feel about the poopy Snoopy. Now, when it comes to the Tintin, I’ve heard reports of hype and blah blah blah. Can it! There’s no overhype. It’s a certifiably rare (at least in terms of the Omega world) Speedmaster that experienced a bit of that “don’t know what we’ve got until it’s gone” phenomenon. And looking back, I think most slept on it because it wasn’t marketed as some sort of limited edition. The whole “FOMO” vibe wasn’t there and it sat in showcases.

I have zero qualms in saying that the Tintin is one of the best Speedies in the business. It made the semi-finals for a reason. Long after the limited editions pile up and people grow tired of animation, cartoons, and glossy packaging, you simply want a damn good looking watch. The Tintin is that watch. It’s a watch for grown-ups who want an everyday Speedmaster with something just a little different. I’ve made my case and I definitely approve this message. The rest, adults, is up to you!

p.s. We noticed some of you are getting so excited about the voting that we noticed some people are finding ways on voting more than 100 times for one watch. We are cleaning up those entries from time to time.

Hot Topics
Introducing: The New Seamaster Professional 300M 60 Years Of Bond — With A Special Animated Case Back
105 comments
Are You Still After An Omega × Swatch MoonSwatch?
85 comments
It’s Time To Invest In A Dress Watch — Our Picks From Breguet, Omega, Grand Seiko, And More
72 comments
The Rolex Waitlist Conundrum — How Much Will The Price Of Your Watch Increase While You Wait?
50 comments
The Best Omega Speedmaster Watches Of 2022
40 comments
Popular
Rolex GMT-Master History And Overview Of All Major References
Robert-Jan Broer
18
The Ultimate Sports Rolex – The Explorer II Reference 1655
Robert-Jan Broer
17
(From The Archives) Shut Up & Read The Truth About Cartier Watches
George Cramer
21