Last week we already showed you the Speedmaster CK2998 Pulsometer, and this week it is time for a little hands-on with the new Speedmaster Apollo 8. Omega dedicates 2018 mainly to the Seamaster collection, celebrating its 70th anniversary and the 25th anniversary of the Seamaster 300M. However, that did not refrain them from releasing a number of new Speedmaster watches as well. Some of you already knew what was coming, due to the leaks that Omega encountered in the period just before BaselWorld. Although some think this has been done on purpose, this wasn’t the case. Does it harm Omega? Of course not, but the surprise effect wasn’t really there anymore. An exception could be this new Speedmaster Apollo 8. A watch that needs to be seen in the flesh.

When seen on the official press pictures, the Speedmaster Apollo 8 might look a bit flat or dull even. This is a piece that should be worn or at least seen in the flesh though. We hope we have been able to get the watch on ‘film’ in a way that the skeletonised dial and depth of the movement is visible. The finishing on the hand-wound Lemania based movement is simply stunning. As we wrote in the initial article about the Speedmaster Apollo 8, this watch has a skeletonised dial and a movement that bears the structure of the near and far side of the Moon surface on it. 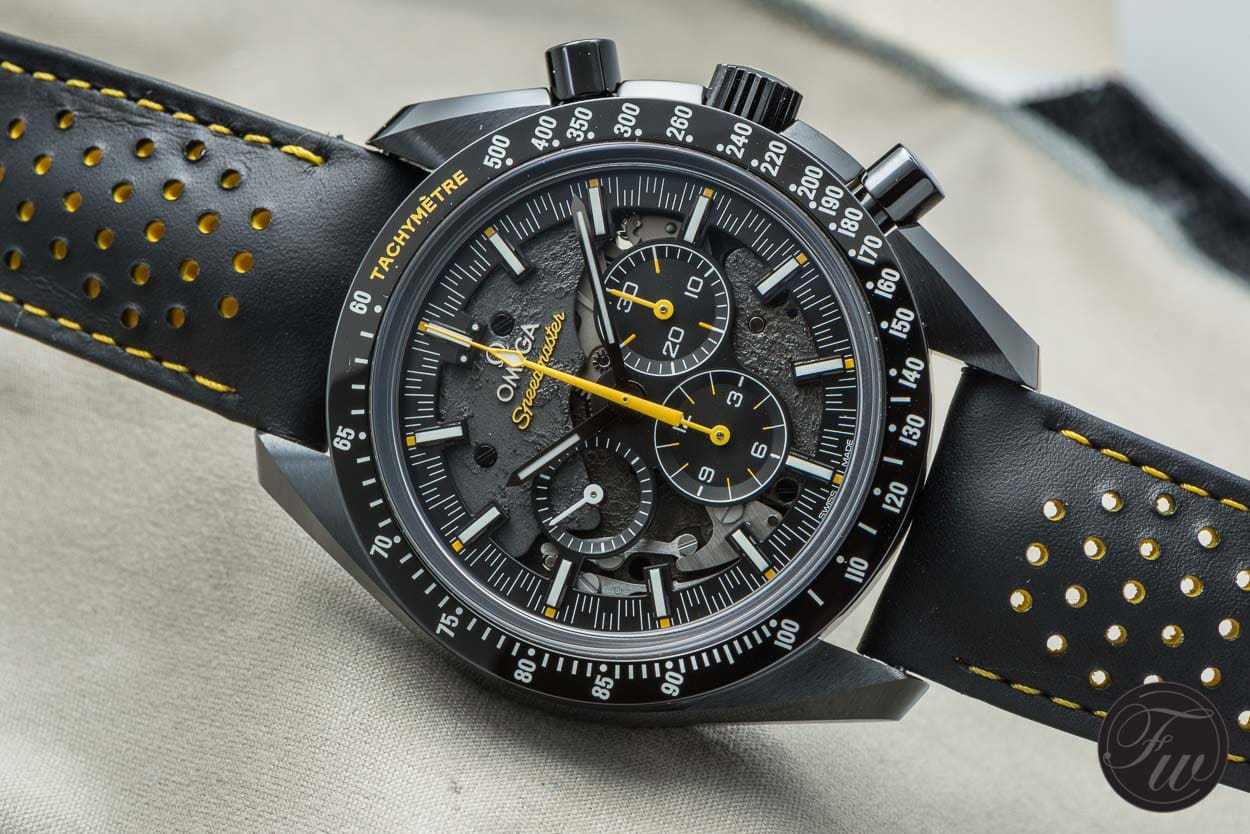 Apollo 8 was the first mission where astronauts orbited the Moon, so they saw the far side of the Moon, or as Omega puts it, the dark side of the Moon. That results in two specific details about this Speedmaster Apollo 8 watch. The whole thing is cased in the ceramic 44.25mm case we know from the Speedmaster Dark Side of the Moon. The other specific detail about the Speedmaster Apollo 8 is the movement. Not the two-register in-house caliber 9300 (or related) movement, but a hand-wound caliber 1869. Of course, derived from the Omega caliber 1861, which is based on the Lemania 1873. Not only enabled this movement Omega from decreasing the thickness of the watch (compared to the Dark Side of the Moon models), but also to apply a superb finish to both sides of it. By using laser ablation and blackened bridges, the caliber 1869 movement shows an interesting finishing on both sides of the movement. 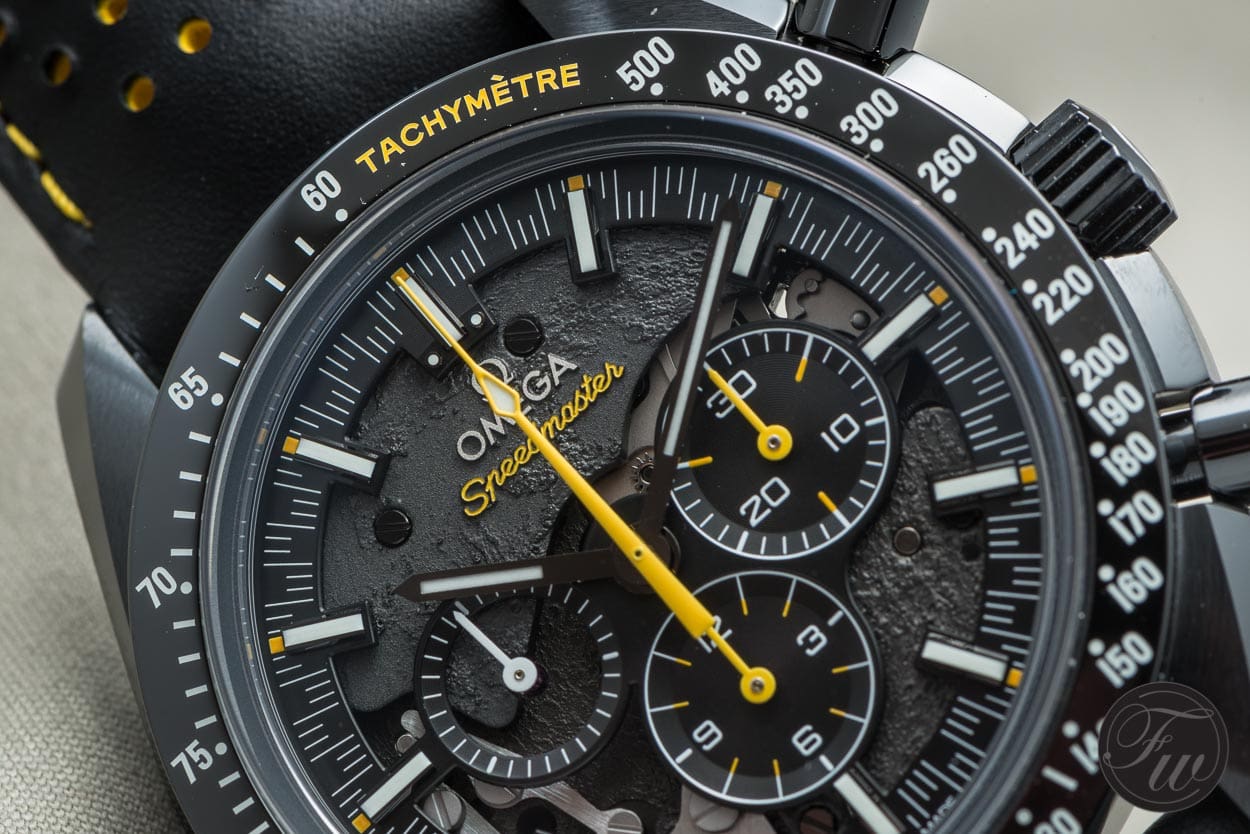 On the dial side, which has been skeletonised, you will find the Moon surface that resembles its near side. By turning the watch around, you will see that the backside corresponds with the surface of the far side of the Moon. By having a skeletonised dial, you’ll find multiple layers on the front, giving it this 3D look. The same goes for the backside of the Speedmaster Apollo 8 watch. The movement uses blackened bridges, with the Moon surface, and this contrasts nicely with the rhodium plated parts of the movement, creating a lot of depth. 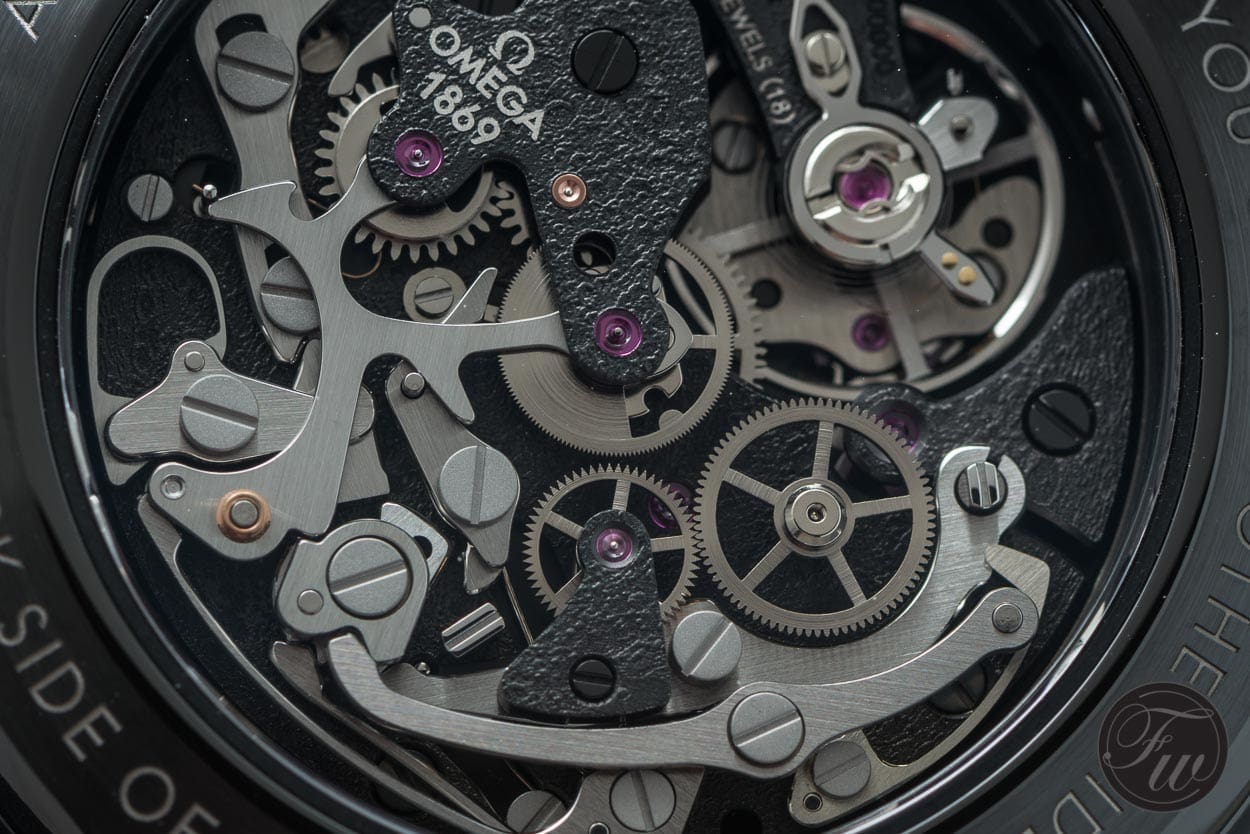 The caliber 1869 movement has the same technical specifications as the regular Moonwatch caliber 1861, with regards to the power reserve (48 hours) and ticking number (21600vph). It just looks very differently, due to this specific treatment and finish that was applied to it. It is a very cool idea, and it wouldn’t have worked on an automatic (caliber 9300) movement since the rotor would be blocking the view. Also, we might just prefer a three register chronograph when doing NASA commemorative editions.

At first sight, or perhaps that’s just my own perception, the Speedmaster Apollo 8 is a ‘technical watch’. That is mainly because of the movement of course, and the use of the ceramic 44.25mm case. Upon closer inspection, you will find there are some ‘racing’ elements in this watch as well. Besides the yellow color, which Omega associates with speed (according to their own explanation during BaselWorld), you will find a racing strap attached to this watch. This strap has yellow stitching that matches the yellow chronograph second hand and ‘Speedmaster’ writing on the dial as well as the yellow ‘Tachymetre’ on the bezel. The inside of the strap is also made of this yellow rubber-ish material, so if you look at the perforation you will also find the color of Speed. 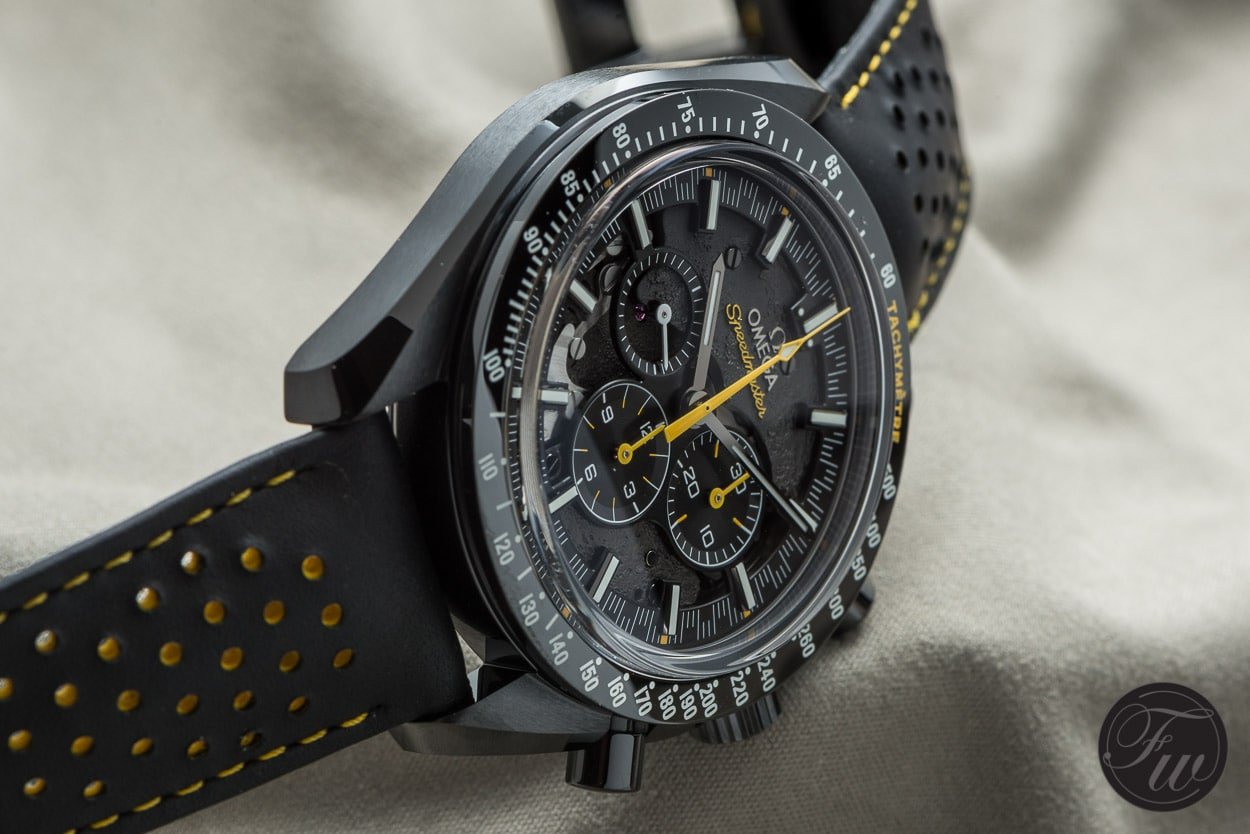 I noticed that the Speedmaster Apollo 8 wasn’t received particularly well with everyone. It isn’t a watch that is immediately liked by all Speedmaster fans, like the Speedmaster 60th anniversary was last year. Except for some people who felt that the patina was a bit too yellow to their taste, there were no real ‘haters’ towards this model. The Speedmaster Apollo 8 is a bit more explicit, as you can imagine. Even I expected a Speedmaster Professional edition for the Apollo 8 this year (as written here), but instead, Omega went with the larger sized Dark Side of the Moon model as a basis. The case is a bit thinner (13.80mm instead of 16.14mm) though. Remember that the Speedmaster Professional Moonphase with aventurine dial of 2012 was also 44mm in diameter. The main controversion in this watch is the use of the yellow color and the skeleton dial. I am not sure why yellow is associated with speed, but it wouldn’t be my first choice to be honest. Or perhaps not my obvious choice. 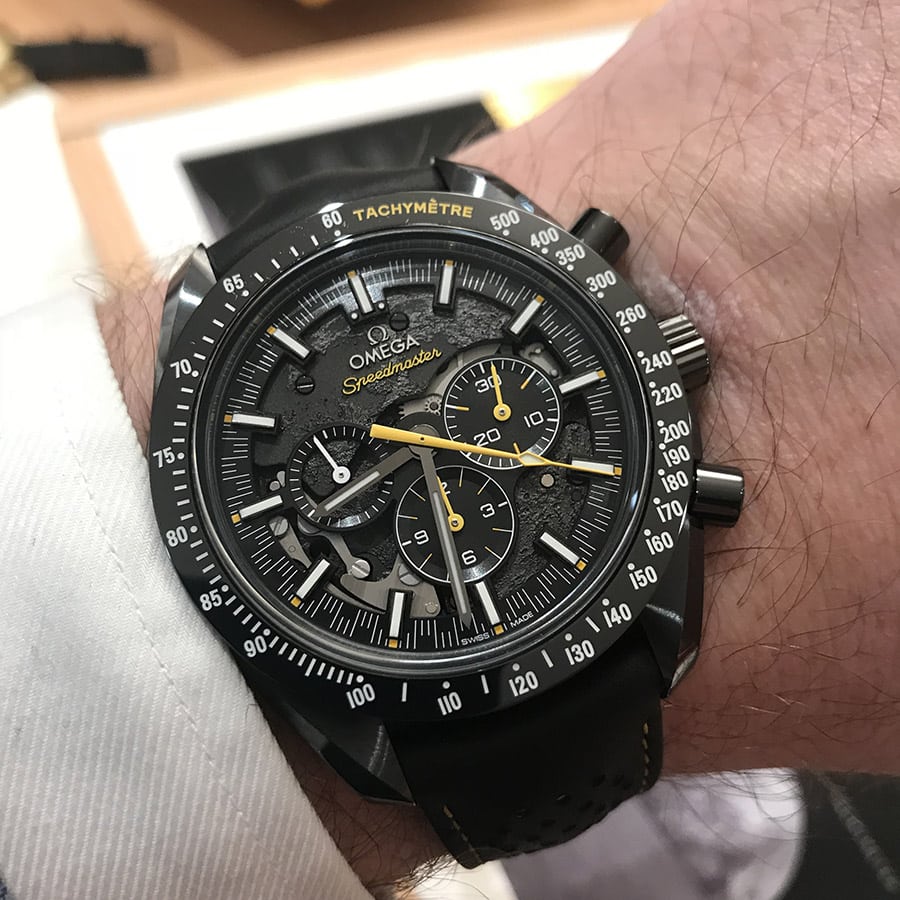 Would all white would make it too boring? Blue wouldn’t make sense either, or red (would make it too much Dark Side of the Moon). One thing is for sure, you can’t please everyone. The vintage Speedmaster guys are probably in the camp where they don’t care much about this watch, but people who have a focus towards new watches and perhaps already own a Speedmaster (Dark Side), might find this piece particularly interesting. It has a lot of ‘Moonwatch’ influences, but still add some new technology to the table like a ceramic case and bezel. The tachymeter scale is luminous and so is the Omega logo on the crown. The racing element to this watch, the use of yellow and the perforated strap is grabbing back to the roots of the Speedmaster line-up. 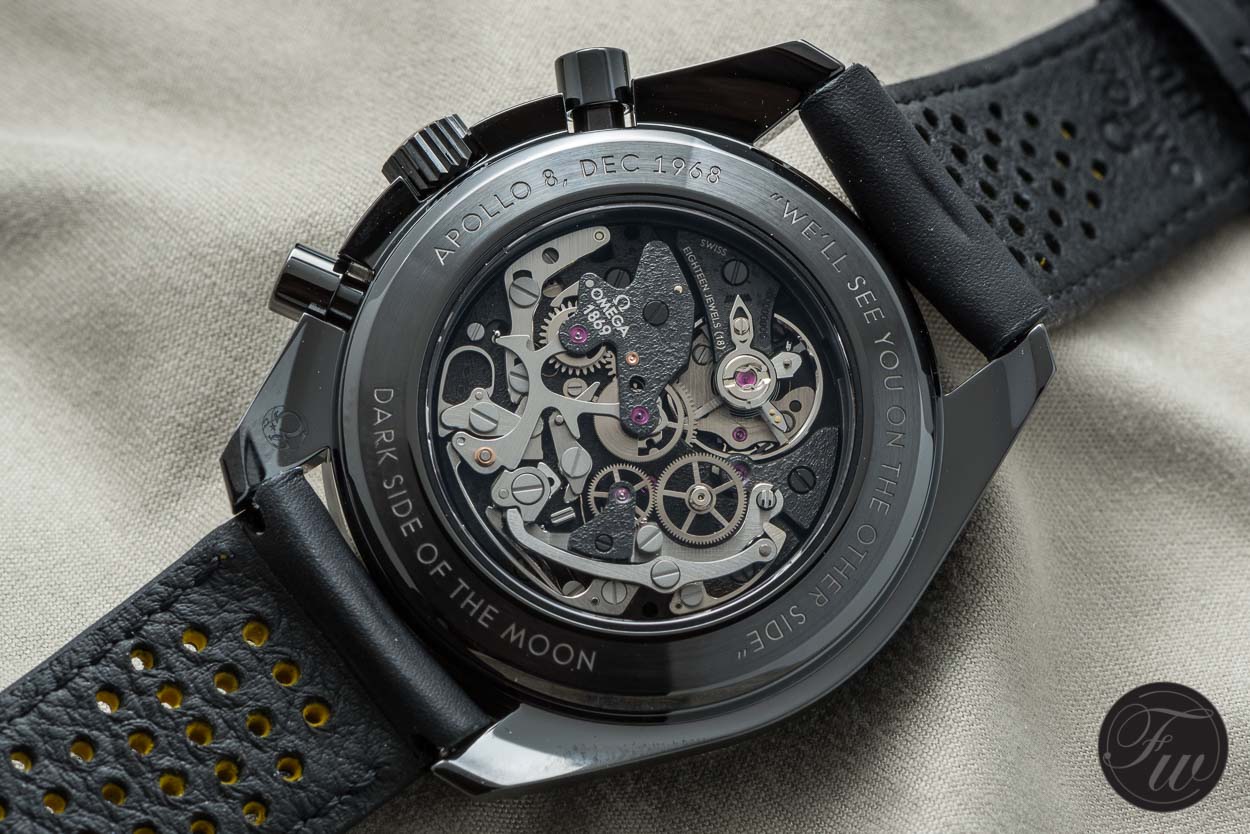 One of our team members, Gerard, was quite skeptical when he saw this watch in the display in BaselWorld. “It is nice, but not my beer”, as he said in his typical aversion to anything other than the original ‘Professional’ model. Obviously true, as the Speedmaster 125 is (probably) the only watch in his Speedmaster collection that is not a ‘Moonwatch’. And to a certain extent, I think the same way as there’s only a ‘125’ and a X-33 that is not a Moonwatch in my collection. I would be open to own a Dark Side of the Moon model though, as I tried and tested this model for quite a long period and was ready to buy one until I bumped into this 18 carat gold Speedmaster Professional Apollo XI model that required all my Dark Side funds. So my intentions were there to buy a Dark Side of the Moon and I am pretty sure I will buy one in the future, as it makes a great daily wearer. However, not for Gerard, I am sure. However, and this surprised me. We had a photo shoot of approximately an hour of all the new Omega watches (including some that didn’t make the press yet, except for some Instagram pictures up till now) and Gerard wore the Speedmaster Apollo 8 for the entire time. At the end of the day, he let me know that he changed his mind about the watch. Everything was very well thought-trough and all details are just awesome. I actually sensed quite some enthusiasm there, for this watch. And a lot of respect for the designer(s), to go the extra miles of having the movement decorated this way. It looks definitely stunning in the flesh. We received quite some positive comments on our Instagram posts on this watch as well, where people really got excited about this Speedmaster Apollo 8. 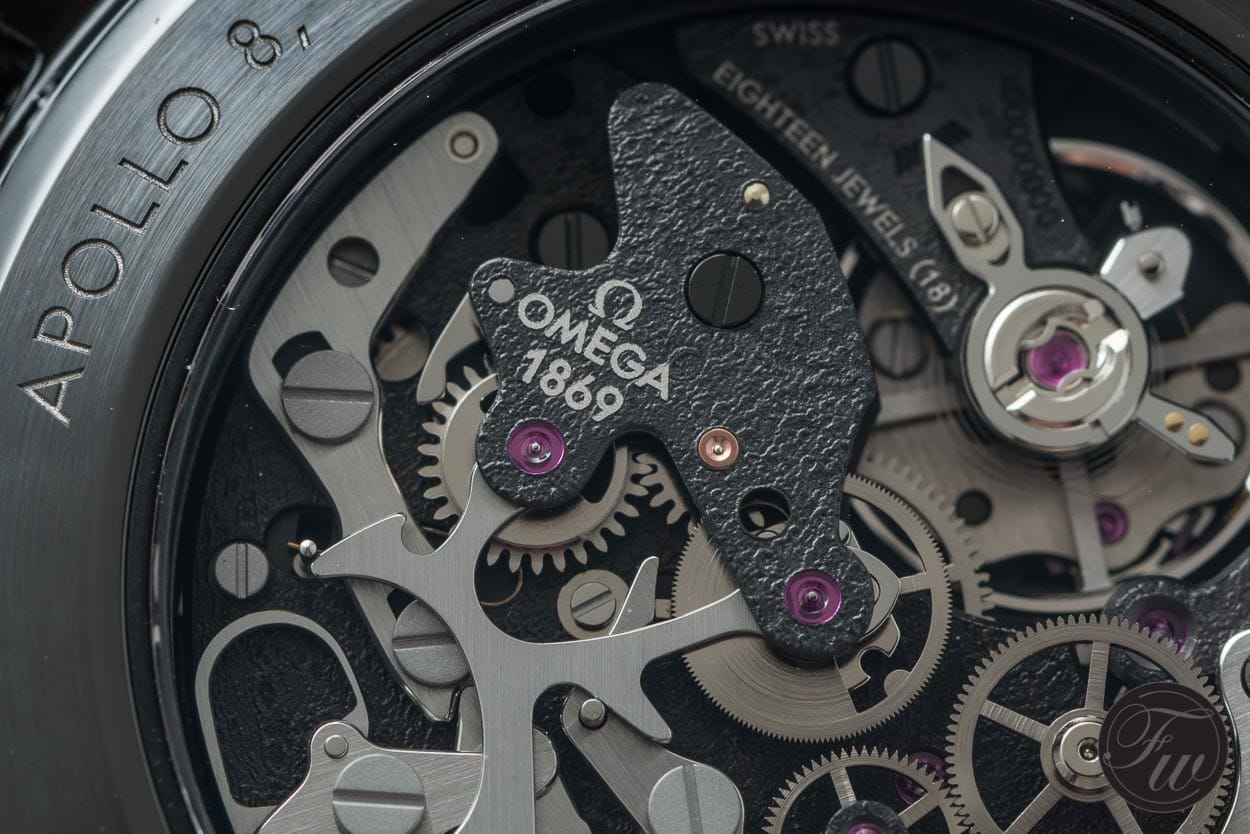 It is definitely a watch that requires some time to discover all of its details in order to appreciate it to the fullest, especially for the guys who have their eyes set on vintage models. For those who just love a good contemporary Speedmaster, this Apollo 8 with skeleton dial and the nicely decorated hand-wound caliber inside the black ceramic case is probably just a matter of funds. I can definitely see myself switching to the Speedmaster Apollo 8 instead of the ‘classic’ Dark Side of the Moon, the thinner case is really a pro and so are the three registers instead of two. At least for me they are. The yellow is something I would need to get used to, but mainly because I’ve never even considered it for a watch nor do I have a watch that has yellow in it. 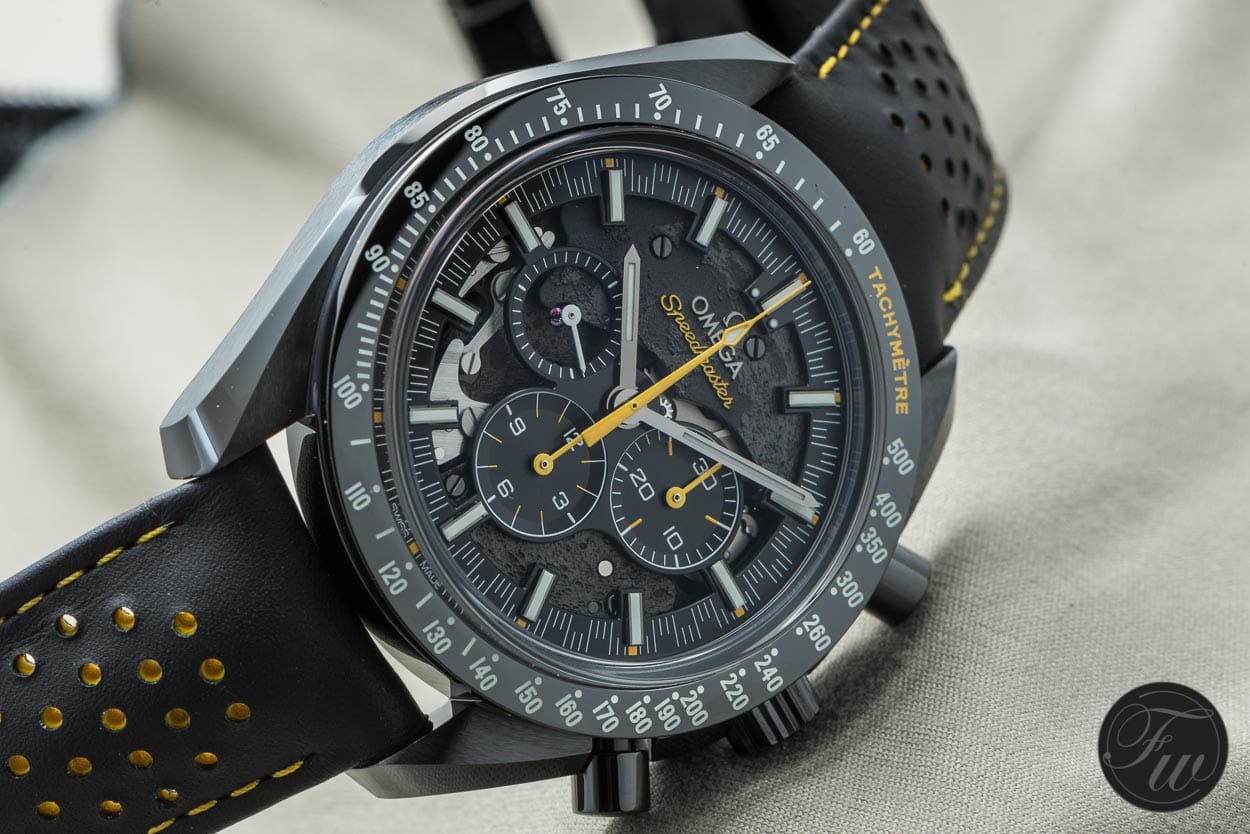