So, after more than one year after the introduction of the Dark Side of the Moon let’s see if we are still as enthusiastic about the watch as we were during Baselworld 2013. 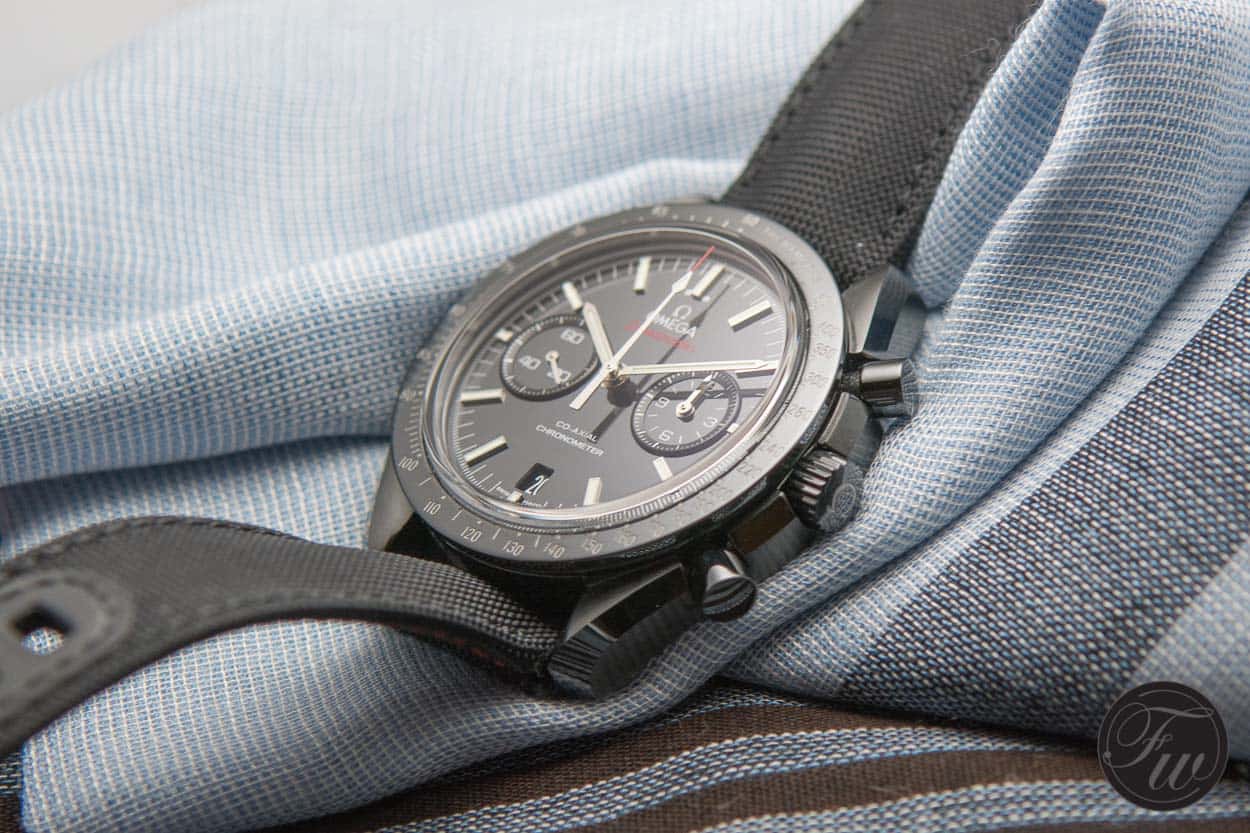 Omega Dark Side of the Moon

When I first laid my eyes on the Speedmaster Dark Side of the Moon I was immediately sold. There was a long wish for an all black Speedmaster. Although there had been a couple of PVDed Speedmasters and the occasional customized DLC Speedmaster (we reviewed one here), there was no official black version of the Speedmaster Professional. Instead, Omega decided to use the new Omega Speedmaster Caliber 9300 Co-Axial Chronograph as a basis and instead of stainless steel (or titanium) use a ceramic case and dial.

The Speedmaster Dark Side of the Moon is crafted from a single block of black zirconium oxide ceramic. The dial and pushers are also made of this material. Omega decided to put a soft nylon strap on the Dark Side of the Moon, with a simple but elegant black ceramic buckle as well. The fact that Omega used the Speedmaster Co-Axial 9300 as a basis, means that the case is 44.25mm and indeed uses this new in-house developed Co-Axial chronograph movement, caliber 9300. This movement is being used in the Seamaster Planet Ocean Chronograph as well for example and is the chronograph counterpart of the caliber 8500 movement.

The two-register chronograph dial lay-out is not to everyone’s liking, especially purists still seem to prefer the classic tri-compax layout from the Omega Speedmaster Professional. Although I’d consider myself a Speedmaster purist, I have to say that the dial of the Dark Side of the Moon (or caliber 9300 in general) was quite easy to get used to. The date aperture at 6 o’clock makes it a well balanced dial without getting too cluttered. The glossy dial matches the polished ceramic bezel.

Regarding the 44.25mm size, it is definitely larger to wear than the classic 42mm Speedmaster Pro ‘Moonwatch’. However, it doesn’t seem to me as being oversized on the wrist. There seems to be a trend towards smaller watches again, but this doesn’t mean that 44mm or 45mm is something the will disappear anytime soon. I guess 42mm was quite oversized in the 1960s as well and now it is actually an ‘average’ size while the 34mm watches of those days (considered to be normal) are really small today. In other words, a 44.25mm diameter is here to stay and I am confident that it won’t look silly in a decade from now.

The same goes for black watches. Where it was a bit of a hype to have a PVD or DLC watch – and later on the ceramic and carbon forged watches – a few years ago, they belong to regular collections these days. There will always be a demand for black watches, be it perhaps a bit less than it is now. The fact that there is at least one Speedmaster available in all-black is probably based on the high demand for such a watch. Head of Product Development of Omega Jean-Claude Monachon already told me a few years ago that they were experimenting with black ‘materials’ for Speedmaster watches. In the end, they decided to use black ceramic which is in my opinion an excellent choice. It is more exclusive than PVD or DLC (and this can also easily be done by 3rd parties) and gives the watch real presence.

The use of the “ZrO2” (formula for black zirconium oxide ceramic) on the dial doesn’t disturb much as some people told me it would. I rather had seen it gone, but since it is just a slight engraving above the centre pinion it doesn’t draw much attention. The red written “Speedmaster” and red tip of the chronograph second hand are a very welcome accent on the dial and makes the watch come alive. I couldn’t think of another colour that would suit the Dark Side of the Moon better. 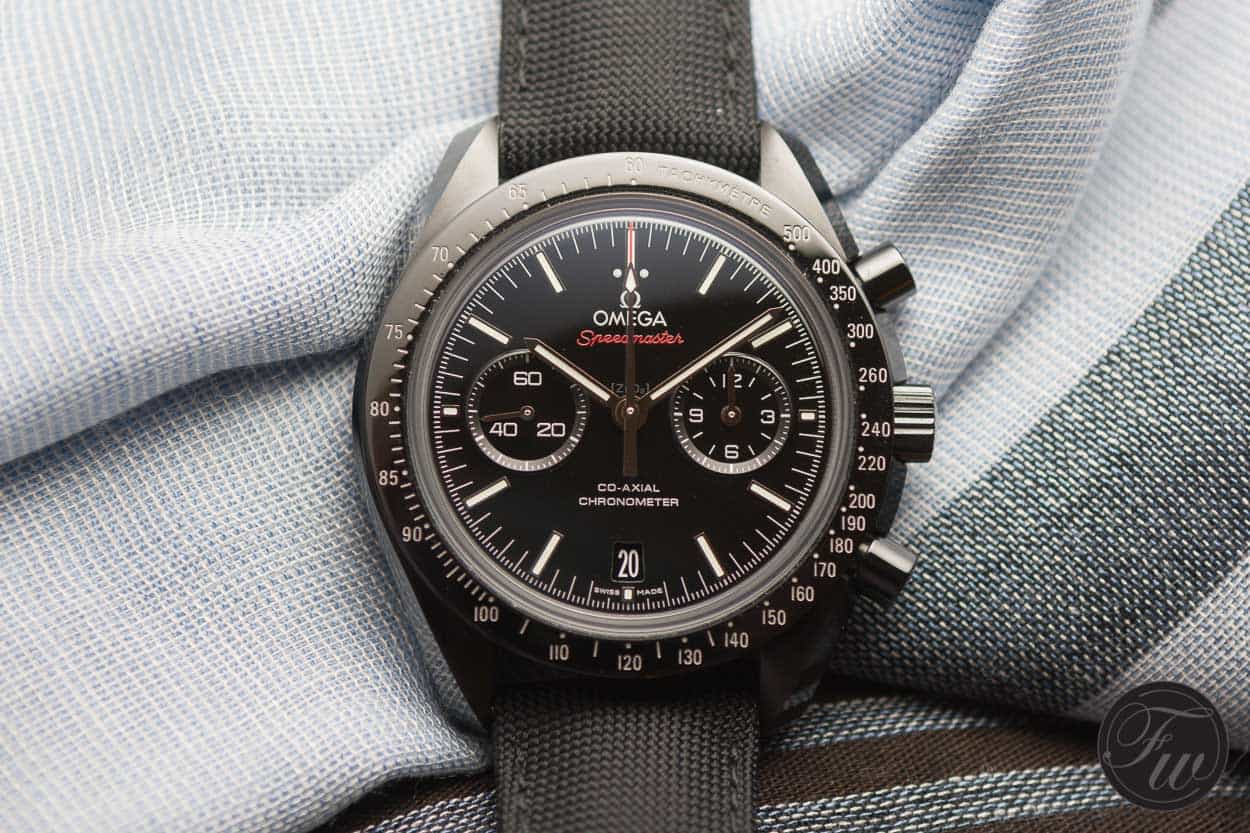 The caliber 9300 movement was already longer available on the market than the Speedmaster Dark Side of the Moon, but I have yet to learn about real issues with this movement. It seems that Omega is capable of developing and manufacturing solid in-house movements that can compete to some of the other big brand and movement names out there.

The large domed crystal on the case back is awesome both on the wrist and when you take it off to see the Omega caliber 9300 movement. When the watch sits on your wrist while driving your car for example, some times the light will catch the domed crystal and you can see this when your hands are on the steering wheel. The case back almost has no metal (or ceramic) part, so the large sapphire crystal takes up most space. It gives you an amazing wide angle view on the caliber 9300 chronograph. Although I think there is a bit too much explanation and text on some parts of the movement, it is nicely done with the red colour to match the other red accents on the watch.

Caliber 9300 is a column wheel chronograph and uses the Si14 balance spring (which also means it is covered by a full four year warranty). 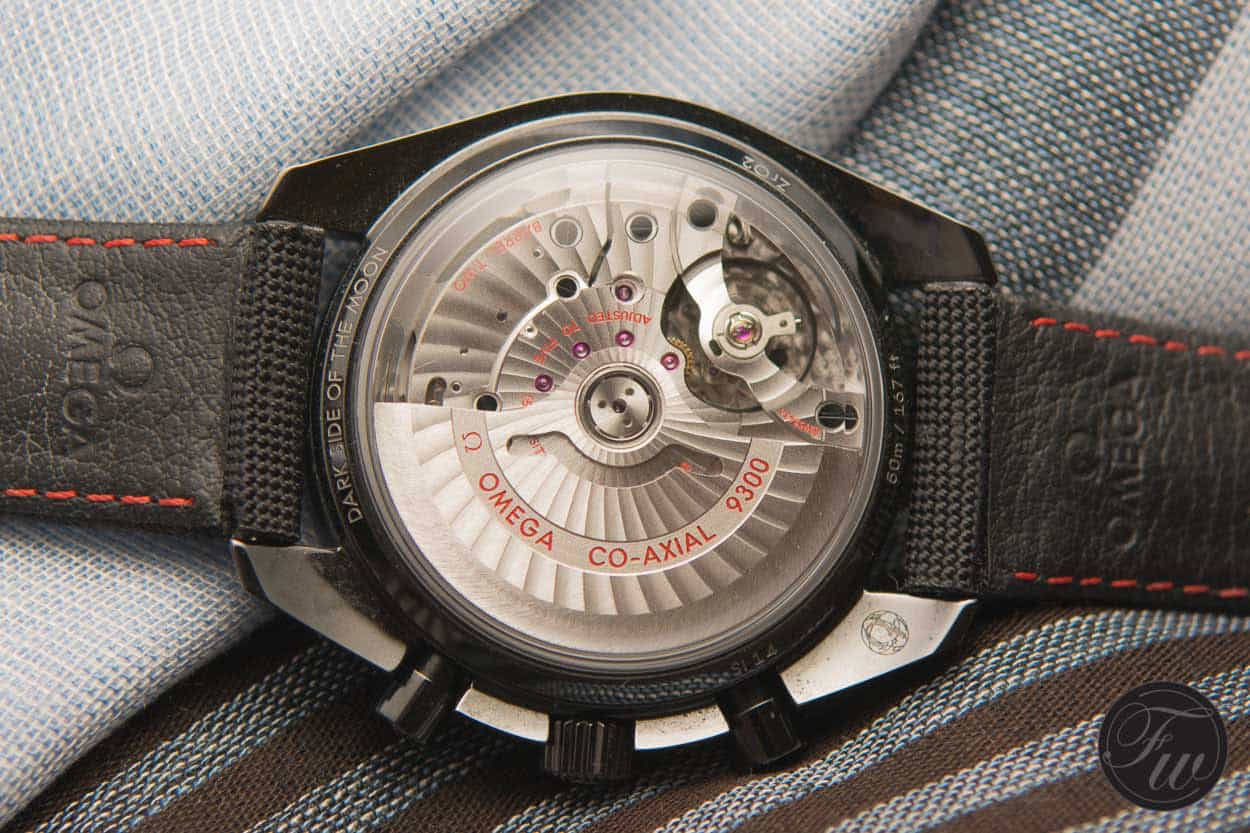 After a full year after introduction the Dark Side of the Moon (or DSotM as Speedmaster enthusiasts call it) the watch hasn’t stopped to amaze me and making me want it. The price tag of the watch is still topic of discussion some times (+/- 8900 Euro including 21% VAT). It isn’t the quality of the watch that is topic of this discussion though, but some people have to get adjusted to see Omega operate in this price category as they are used to the +/- 4000 Euro Speedmaster Professional models and Seamaster Planet Ocean watches (also in the range of +/- 5000 Euro).

A list price of 8900 Euro is quite a steep increase compared to the mentioned prices people were used to. Is the Omega Speedmaster Dark Side of the Moon worth the price tag? In my opinion it definitely is and the high demand for the watch seems to back this up. You can’t compare this watch to the Speedmaster Professional hand-wound caliber 1861 models, there is a lot of innovation in the new caliber 9300 range of Speedmasters that make it an entirely different timepiece from those Moonwatch models. 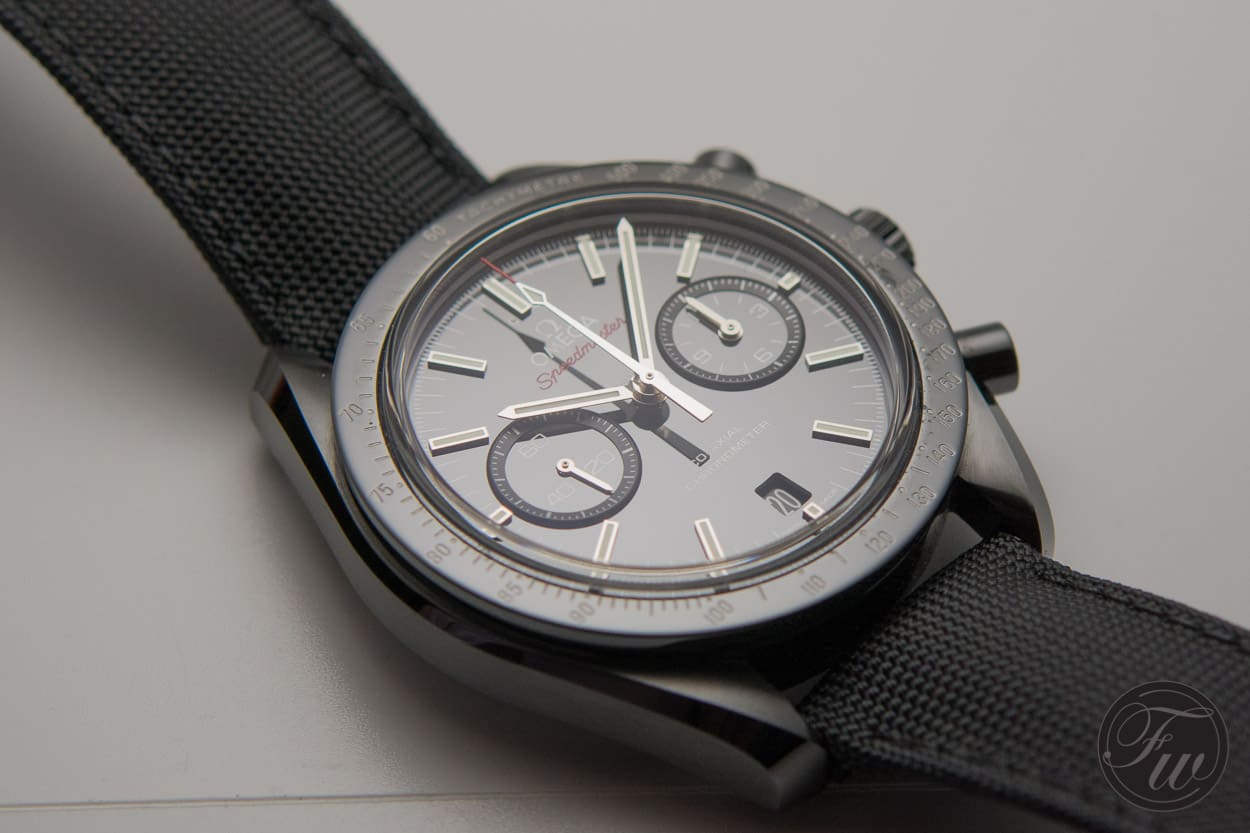 More information on the Dark Side of the Moon can be found here.