A few Speedy Tuesdays ago, we showed you the new Omega Speedmaster Moonphase Co-Axial Master Chronometer collection, except for the version in platinum. This limited edition of 57 pieces only (referring to 1957, the founding year of the Speedmaster collection), with a case made of platinum, using red liquidmetal(tm) for its bezel and has a platinum dial. Using a platinum dial and red accents made me think of the introduced Globemaster Annual Calendar in platinum as well.

You can ask yourself whether a Speedmaster should be in a 44.25mm diameter case of platinum, being a sports watch and all, but it really suits the Speedmaster Moonphase Co-Axial quite well. The watch can be seen as a more dressy watch than the regular Speedmaster (Professional and caliber 9300) models, with its red bezel and alligator strap. Where the stainless steel and bi-color Speedmaster Moonphase Co-Axial models use the caliber 9904 movement, the gold and platinum versions are equipped with the caliber 9905 movement. Specification wise, they are similar, but the use of materials for the rotor and balance bridge are different (Sedna gold). Based on the caliber 9300, the 9904 and 9905 are featuring a Moonphase complication and are both METAS certified. Besides being accurate (average daily deviation of 0 sec – 5 sec) the METAS certification also ensures the watch is anti-magnetic up to 15,000 gauss. More on METAS here. Although some people think METAS is purely a marketing tool, METAS is an independent organization responsible for defining standards and auditing them accordingly. In this case, there is always a METAS employee located in the Omega lab and doing tests on samples from the test process on all METAS certified watches, to ensure the process is actually working accordingly. This independent auditor from METAS is an important asset compared to other brands that come up with definitions and test it themselves. Within METAS, the chronometer standard is also being taken into account and all movements are COSC certified before being cased and put back into the (METAS certified) production process. All these watches are “Master Chronometer” according to Omega, which isn’t a registered definition. The caliber 9905 has a power reserve of 60 hours and has a silicon (Si14) balance spring. The watch is therefor also under warranty for 4 years (instead of the normal 2 years).

The moonphase is applied to a burgundy red disc that matches the liquidmetal(tm) bezel and red alligator strap. According to Omega, the moon phase disc (that runs from 0 to 29,5 days, the cycle of the Moon) is accurate up to 10 years. That is if you don’t take the watch off your wrist and decide not to use a winder to store it. 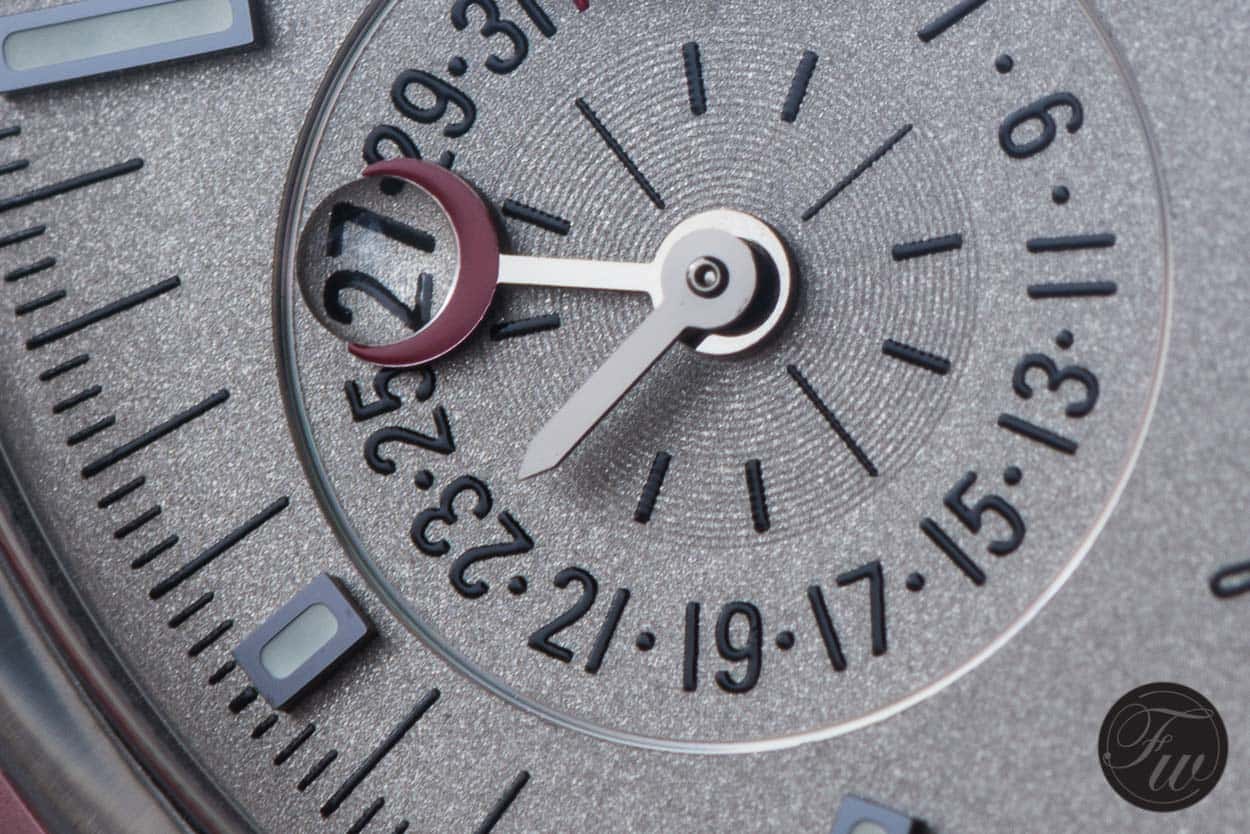 Omega used platinum dials a couple of times now (also in the Grey Side of the Moon of two years ago for example) and I love them. The platinum dial in this Speedmaster Moonphase Co-Axial Master Chronometer is just stunning. Just like the GSotM is has a couple of red accents on the dial which gives a very nice contrast to the dial.

The date window, located in the left sub dial has a little hand indicating the current date, using a small loupe (also with a red accent on the moon shaped indicator). The Co-Axial Master Chronometer is printed below the moonphase aperture at six o’clock. The entire dial is quite busy but doesn’t appear to me as too cluttered. 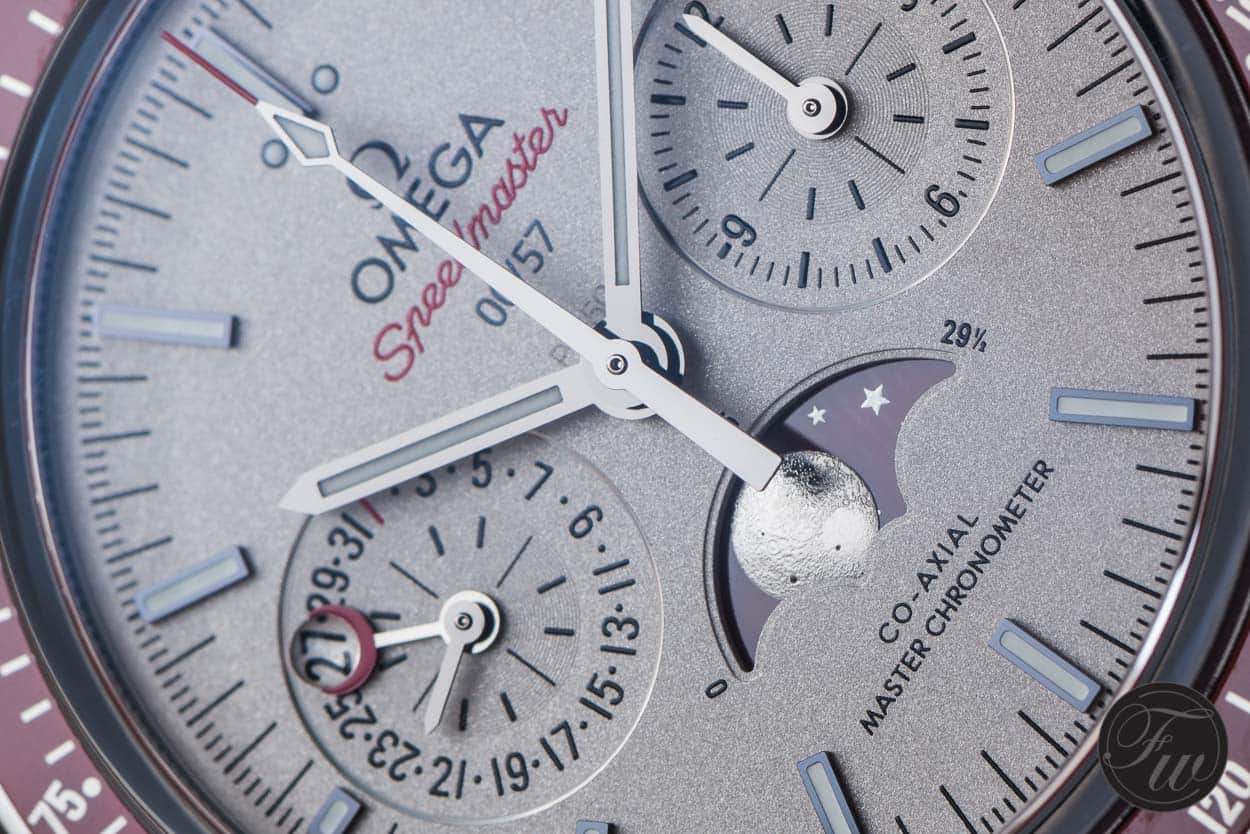 Being a limited edition of 57 pieces only, I guess that this watch will be sold out relatively soon (given the price of CHF45,000 Swiss Francs). The people who aren’t that lucky or able to purchase the Speedmaster Moonphase Co-Axial platinum limited edition can decide to go for the same model in stainless steel, bi-color or gold.

Hot Topics
Are You Still After An Omega × Swatch MoonSwatch?
118 comments
Introducing: The Oris Divers Sixty-Five Fratello Limited Edition
111 comments
Rolex Is Going Certified Pre-Owned
71 comments
Why Do We Cling To The Evergreens From Brands Like Rolex, Omega, JLC, And Cartier?
48 comments
Sunday Morning Showdown: A Two-Handed Battle — Breguet Classique 5157 Vs. A. Lange & Söhne Saxonia Thin
45 comments
Popular
A Question From A Reader: “Which Modern Speedmaster Is Closest To The Original Moonwatch?”
Robert-Jan Broer
14
Top 10 Rolex Watches – Overview of Models Favoured By Our Readers
Fratello
24
Rolex GMT-Master History And Overview Of All Major References
Robert-Jan Broer
19