The Tokyo 2020 Olympic Games are fully underway! And what better opportunity to have a look at this extraordinary set of watches? Omega already introduced (and released) them during the Summer of 2018 in anticipation of the 2020 Games. Little did we know back then that the Games of the XXXII Olympiad would be postponed. However, thanks to Omega’s precocity, we have been lucky enough to enjoy these watches three years in advance.

Before we start, I just want to remind you that Omega introduced all five of these Speedmaster Tokyo 2020 limited editions separately, but also as a set. Each individual watch was limited to 2020 pieces, and only 55 sets were produced. They were all intended for sale in the Japanese Domestic Market (JDM). However, you will notice that some of the watches and sets found their way to other parts of the world as well. Together with the help of other Fratello team members, we were able to secure the red bezel Speedmaster Professional Tokyo 2020 model and nicknamed it the “Rising Sun”. But, what about the other four models? Three of them are based on existing Speedmaster Professional watches — namely on previous limited editions. The Rising Sun and green bezel editions are loosely based on the Speedmaster Moonphase Co-Axial watches in 44.25mm. 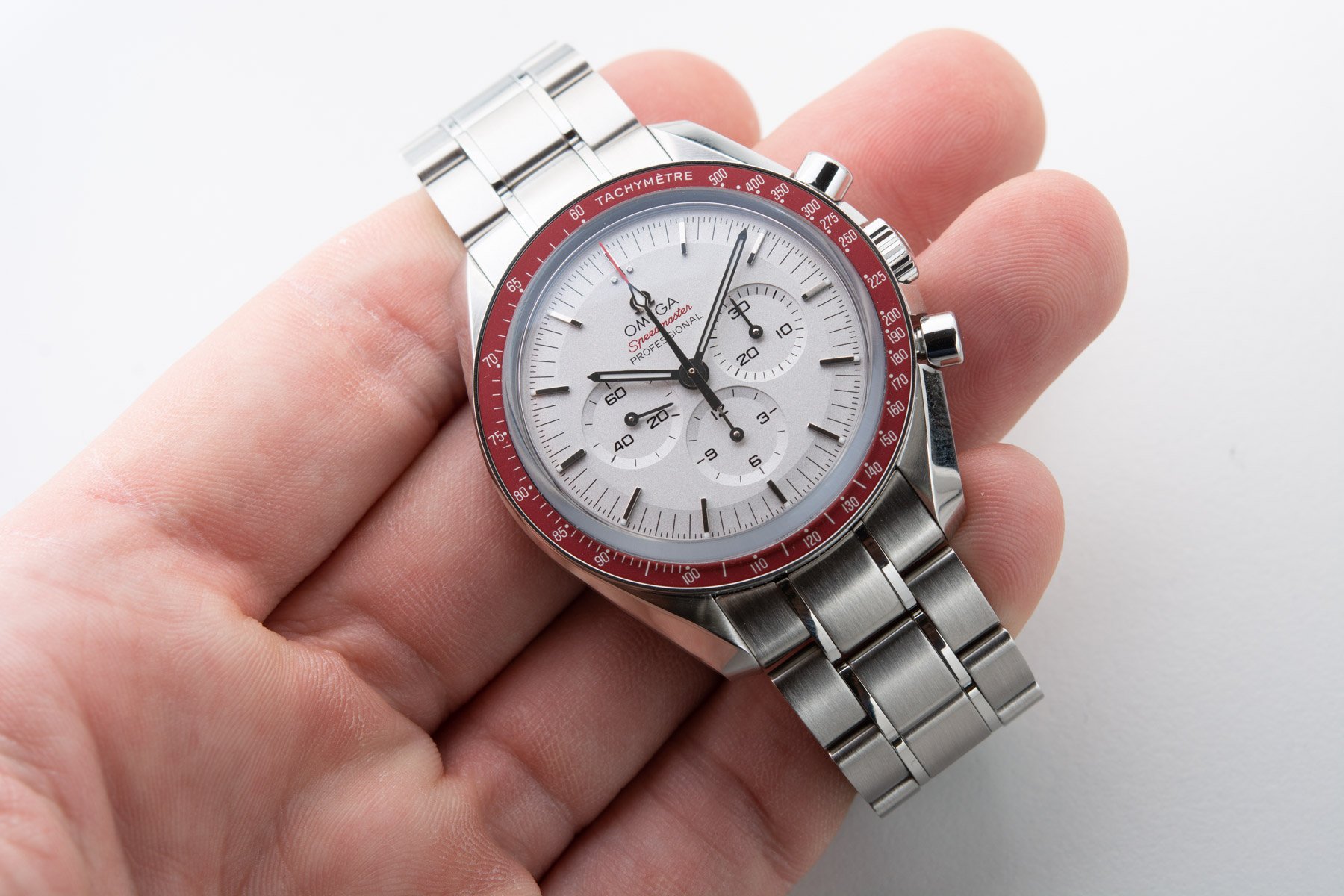 In total, Omega produced 5 × 2020 watches for sale individually, and 55 × 5 for the sets. This adds up to a grand total of 10.375 watches. The five watches in the 55 sets are identical to the ones that are being sold separately. The only real difference is that they come with an additional (alligator) strap and folding buckle for each one. The box-set of five Speedmaster Tokyo 2020 watches is huge and is made up of two separate compartments. The upper compartment holds the watches, and a lower compartment houses the additional straps and a strap changing tool. 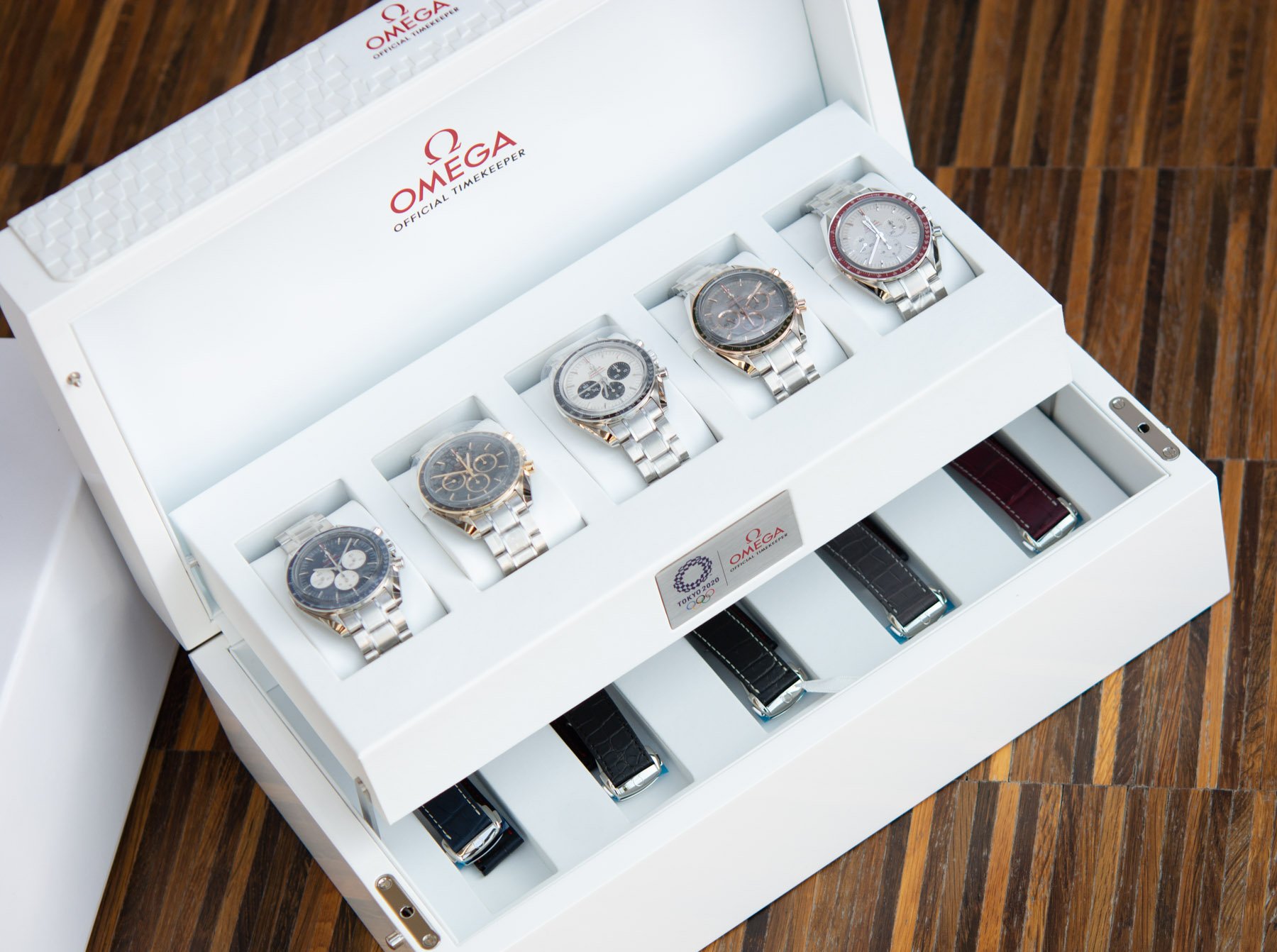 The alligator straps’ colors match the bezel of each of the five watches. The red one goes with the Speedmaster Rising Sun. The grey one matches the gold/steel version with the grey dial. The black strap goes with the Panda-dial model, etc. But you can also mix and match to your heart’s content! Just make sure to use the proper tool to swap the bracelet for a strap (and vice versa) and to use a bit of masking tape on the lugs to prevent it from getting scratched. 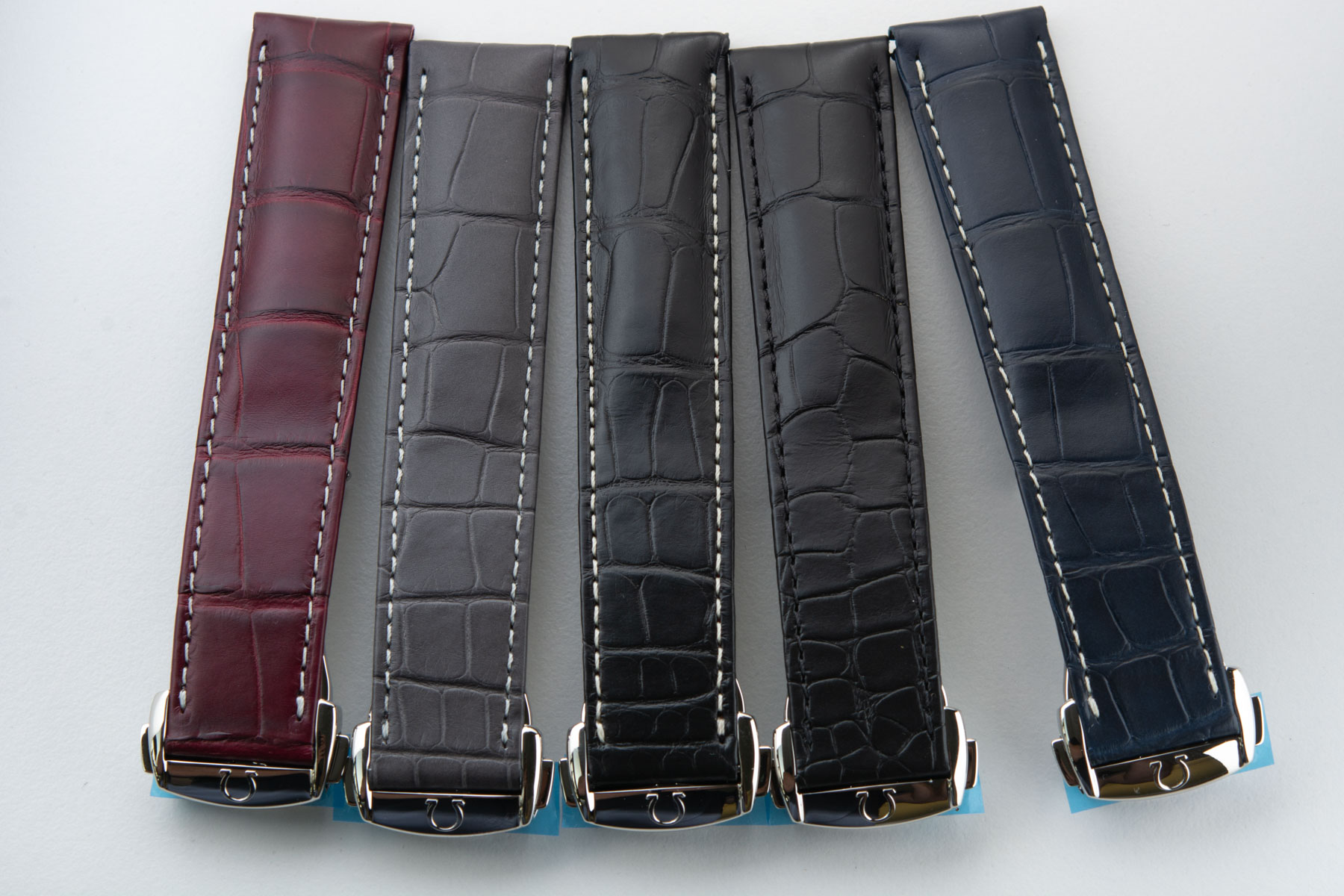 In the box, you will find all five Speedmaster Tokyo 2020 Limited Edition models. Watches that could, and should (if you’re a fan), be said to look somewhat familiar to what Omega has been releasing over the past years. To help set them apart, the Speedmaster Tokyo 2020 watches are all exclusively fitted with a sapphire crystal and have a specially designed case back featuring the Tokyo 2020 Olympic Games logo. On the case back you will also find the unique number of the watch (and set, in this case). So if you have set number 6/55, all your watches have 6/55 engraved on the back.

Let’s have a closer look at the individual watches. 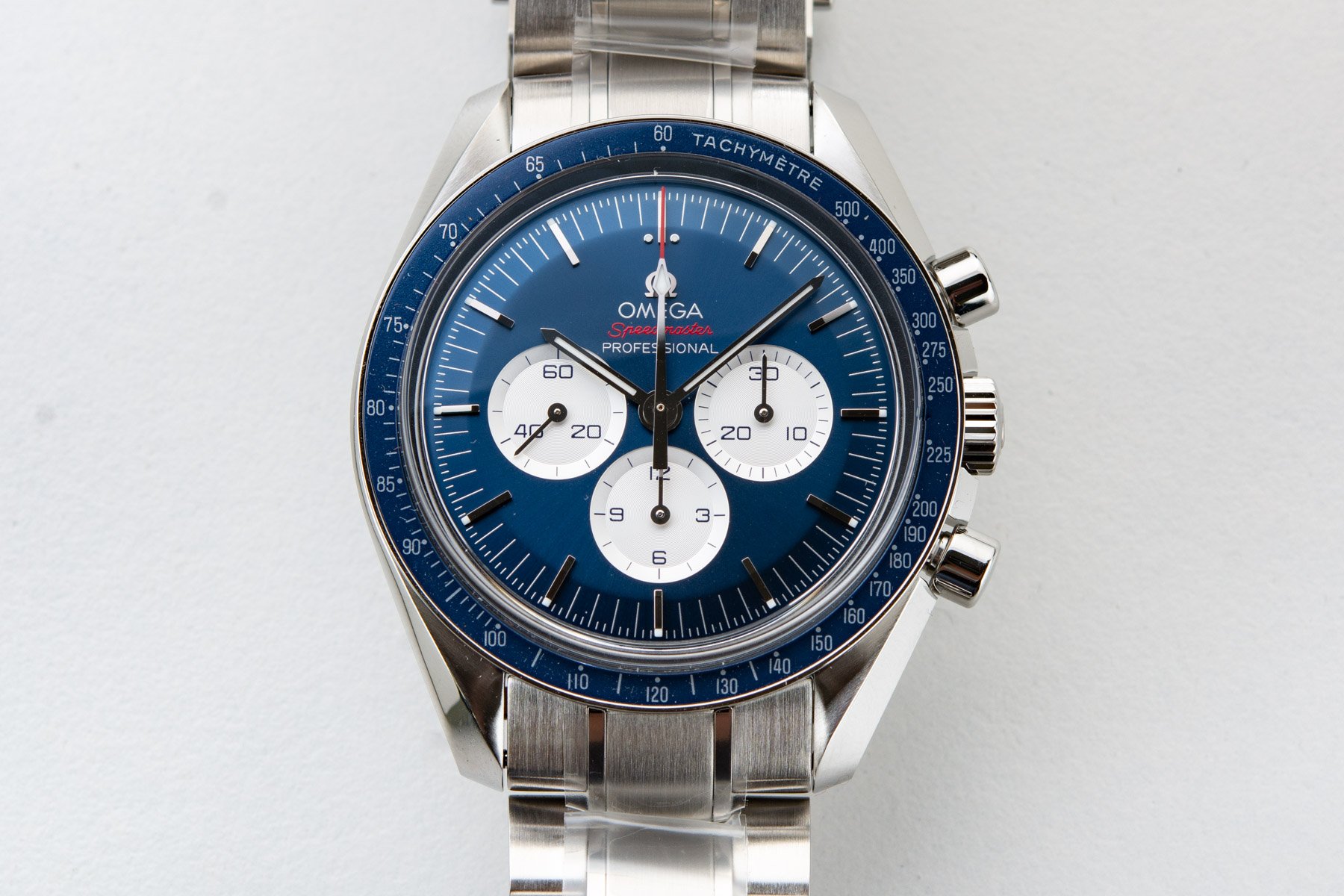 Starting with the blue ring, this particular Speedmaster Tokyo 2020 Limited Edition model has its roots in the very similar-looking Gemini IV limited edition from 2005. The blue looks incredibly nice (just like the Gemini IV model). One of the main differences from the 2005 model, is that a sapphire crystal is used instead of Hesalite. The printing on the dial sets it apart, as well as the commemorative Tokyo 2020 case back. 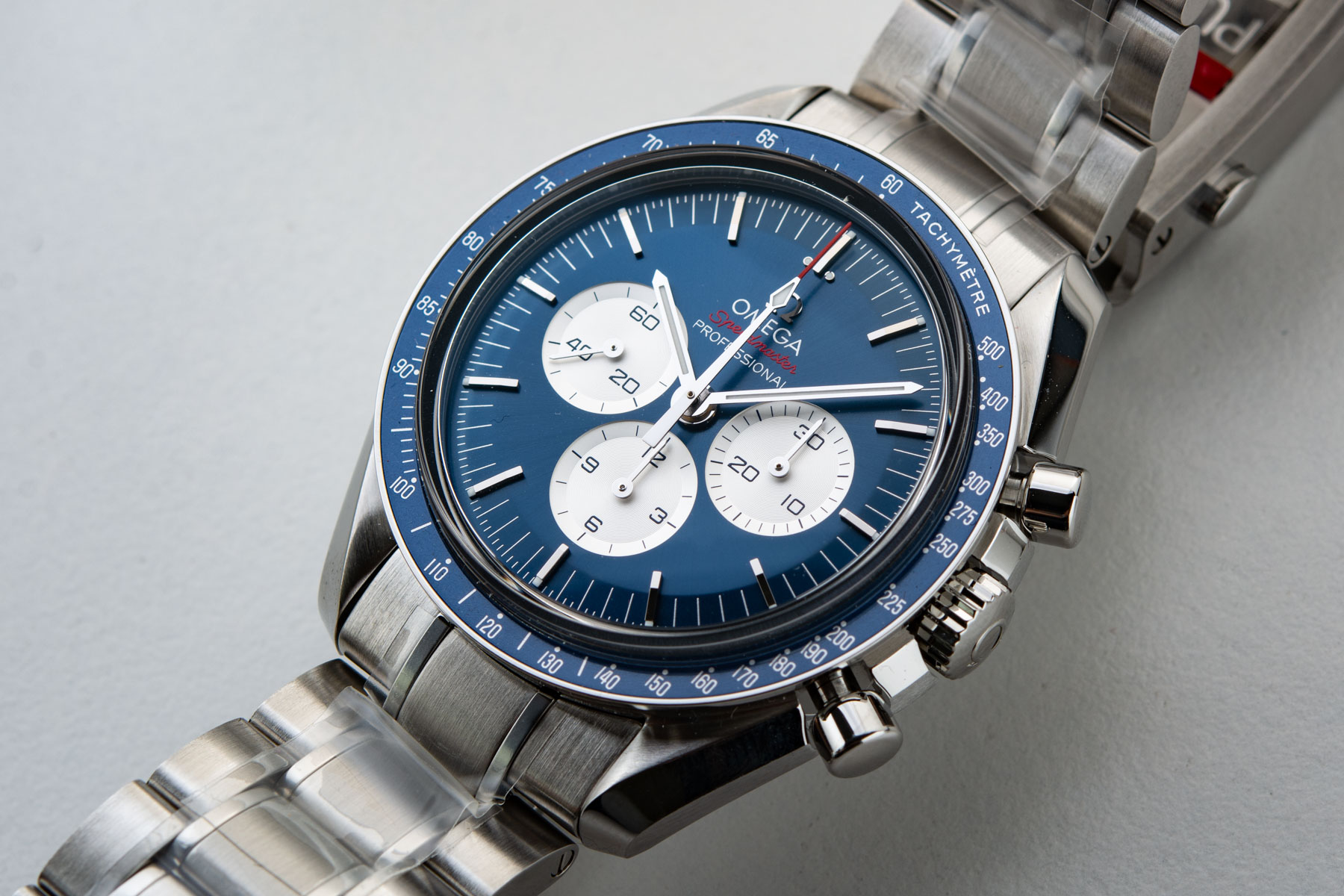 Something worth knowing is that the bracelet on these Speedmaster Tokyo 2020 watches has an easy adjustment system in the clasp. Interestingly enough, Omega didn’t use this clasp on any other Speedmaster Professional watches that I am aware of. As you know, the new Speedmaster Professional’s bracelet design is also completely different, and though it can be adjusted at the clasp, you will need a little tool to do so. 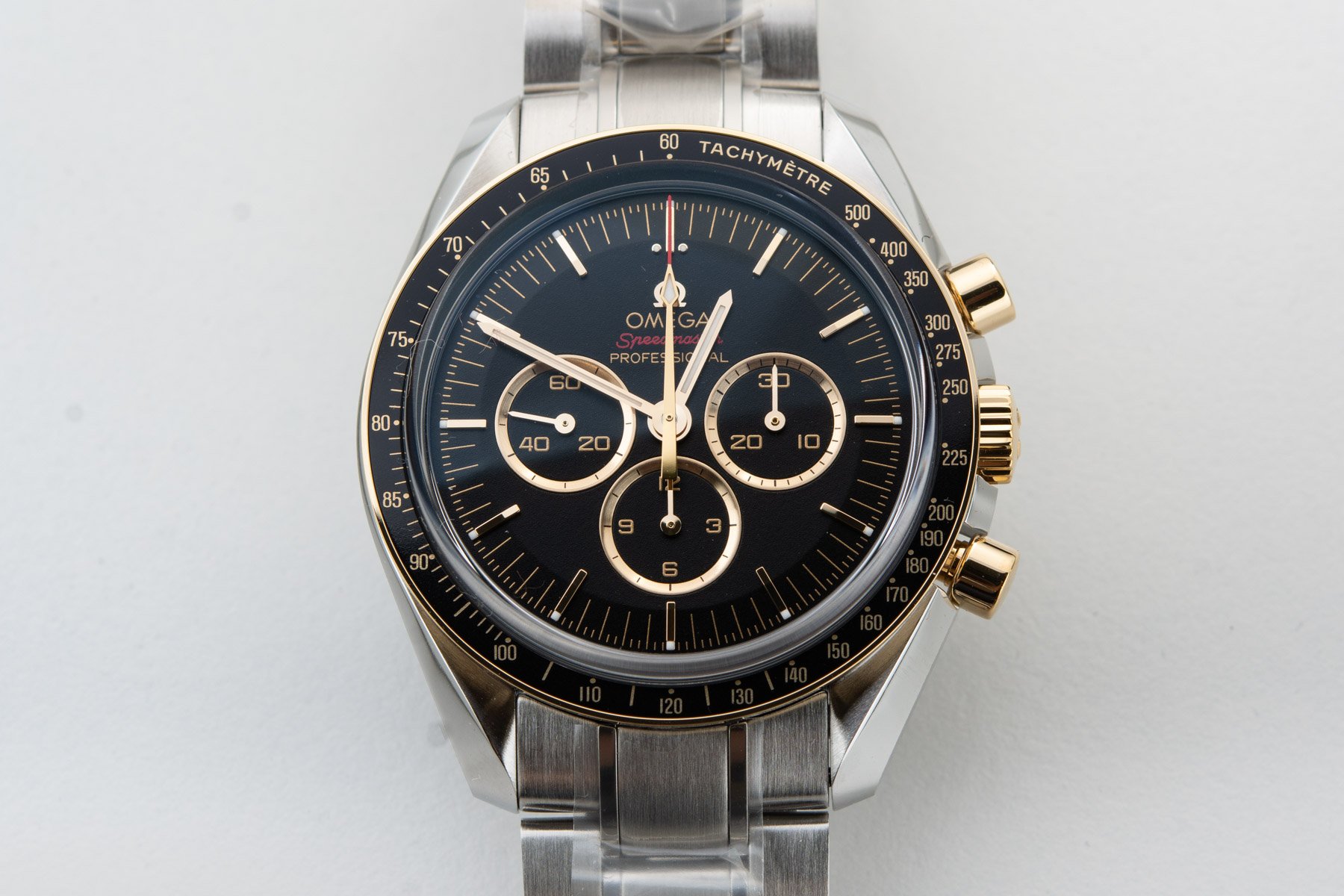 Next up is the Speedmaster Tokyo 2020 Limited Edition with the 18-carat gold ring, representing the yellow ring in the iconic Olympic Games logo. There are actually two bi-colour Speedmaster watches in this set, but I am talking about the version with the black dial and yellow gold sub-dial rims. Also featuring gold hands and markers. This Speedmaster Tokyo 2020 Limited Edition is based on an Apollo 15 model 35th anniversary, also a two-tone model. However, that 2006 model was a combination of stainless steel and rose gold, not yellow gold. A minor difference, perhaps, but still noteworthy. 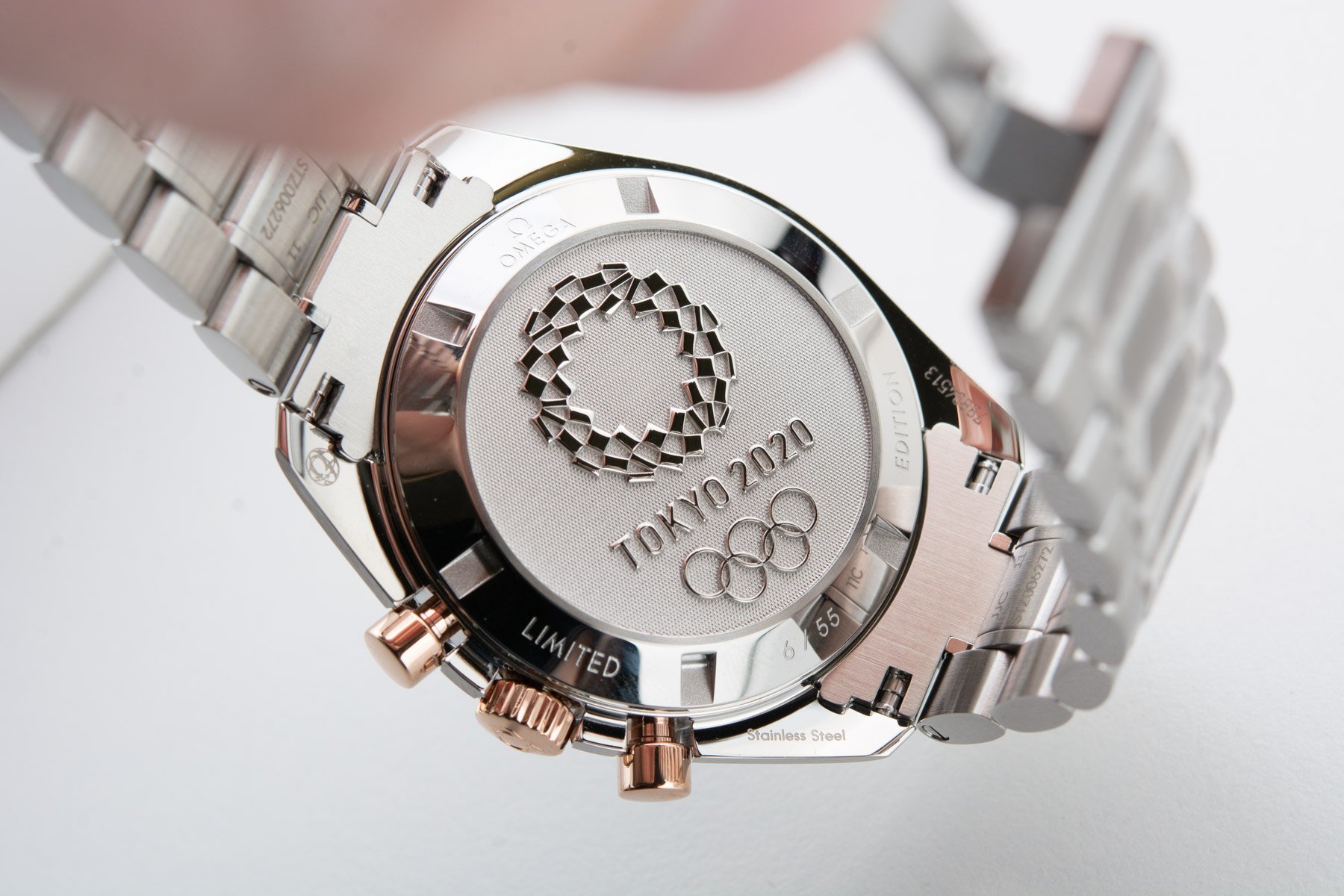 The Apollo 15 mission watch was limited to 1971 pieces. This was done in reference to the year in which the mission with astronauts Gordon, Scott, and Irwin took place. Astronaut Scott, later on, claimed he was wearing another watch in the short but fascinating interview we had with him. I love this version, just as I love the Apollo 15 35th anniversary model, but I would have really liked them to come on a matching two-tone bracelet. 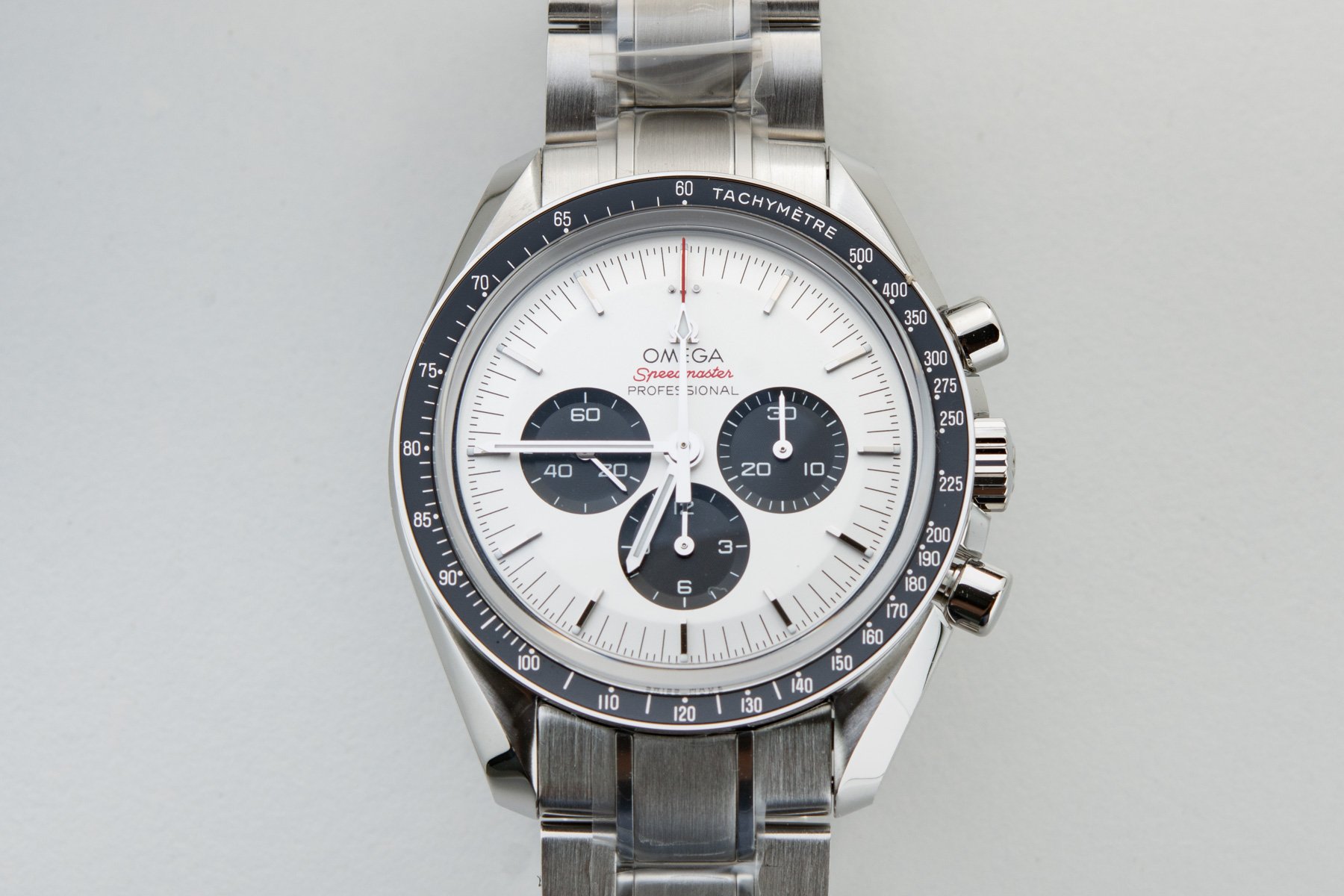 The Speedmaster Tokyo 2020 Limited Edition that represents the black ring is based on two incredibly popular (and now discontinued) models. The Speedmaster Mitsukoshi and the Apollo XI 35th anniversary watches. I remember that the late Chuck Maddox managed to buy a Mitsukoshi, which was quite a special thing even back in the day. Only 300 pieces were ever made, and I assume that most of them stayed in Japan (which has a large and passionate Speedmaster community). If you start looking, you will find Franken versions of the Mitsukoshi, where the dial and hands were ordered as spare parts and swapped with the standard black dial and white baton hands. But that doesn’t make it a real Mitsukoshi of course.

But enough of limited editions and rarities from days long past. Let’s get back to the Speedmaster Tokyo 2020 edition, Green Ring. There are a couple of details that set it aside from the two models I just mentioned. First, the printing on the dial is slightly different — with the Speedmaster text printed in red. And second, the tip on the second hand of the chronograph is painted red to match the dial text. These two small details really set this specific model apart from its sources of inspiration and make it a very interesting watch in its own right. 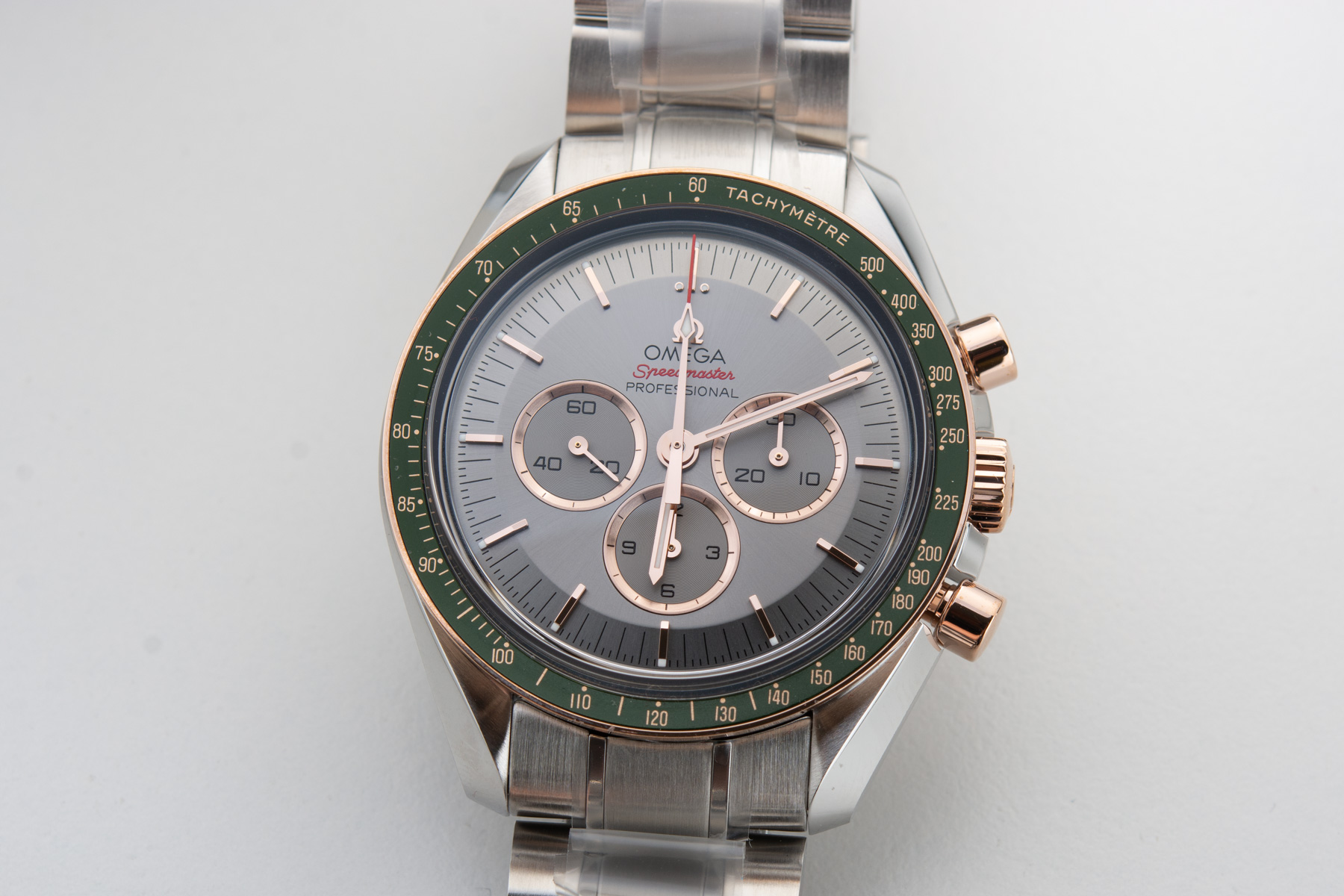 This is where (I think) things start getting interesting. Mostly as with the remaining two versions, Omega didn’t get their inspiration from limited Moonwatch models. Instead, they draw from Speedmaster watches that don’t really belong to the Moonwatch line-up. Let’s start with the green ring version. This is the second bi-color watch in the set of Speedmaster Tokyo 2020 Limited Edition watches. This time featuring rose gold. Or “Sedna” gold as Omega calls it. It’s a special alloy that will also keep its rose color over time (as normal rose gold will tend to ‘fade’ back to yellow gold after a while).

I like this specific version because it is not based on any existing Moonwatch from the past, and therefore feels like something completely different. Also, I have turned a bit to the dark side in recent years and starting to like two-tone and even full-gold watches. The green matches the grey dial and rose gold details perfectly. When its source of inspiration came out in 2016, it didn’t grab my attention immediately but I did start to appreciate it over time. In the end, the choice for me was between this specific Speedmaster  Tokyo 2020 Limited Edition and the “Rising Sun”. You have to make tough decisions sometimes… 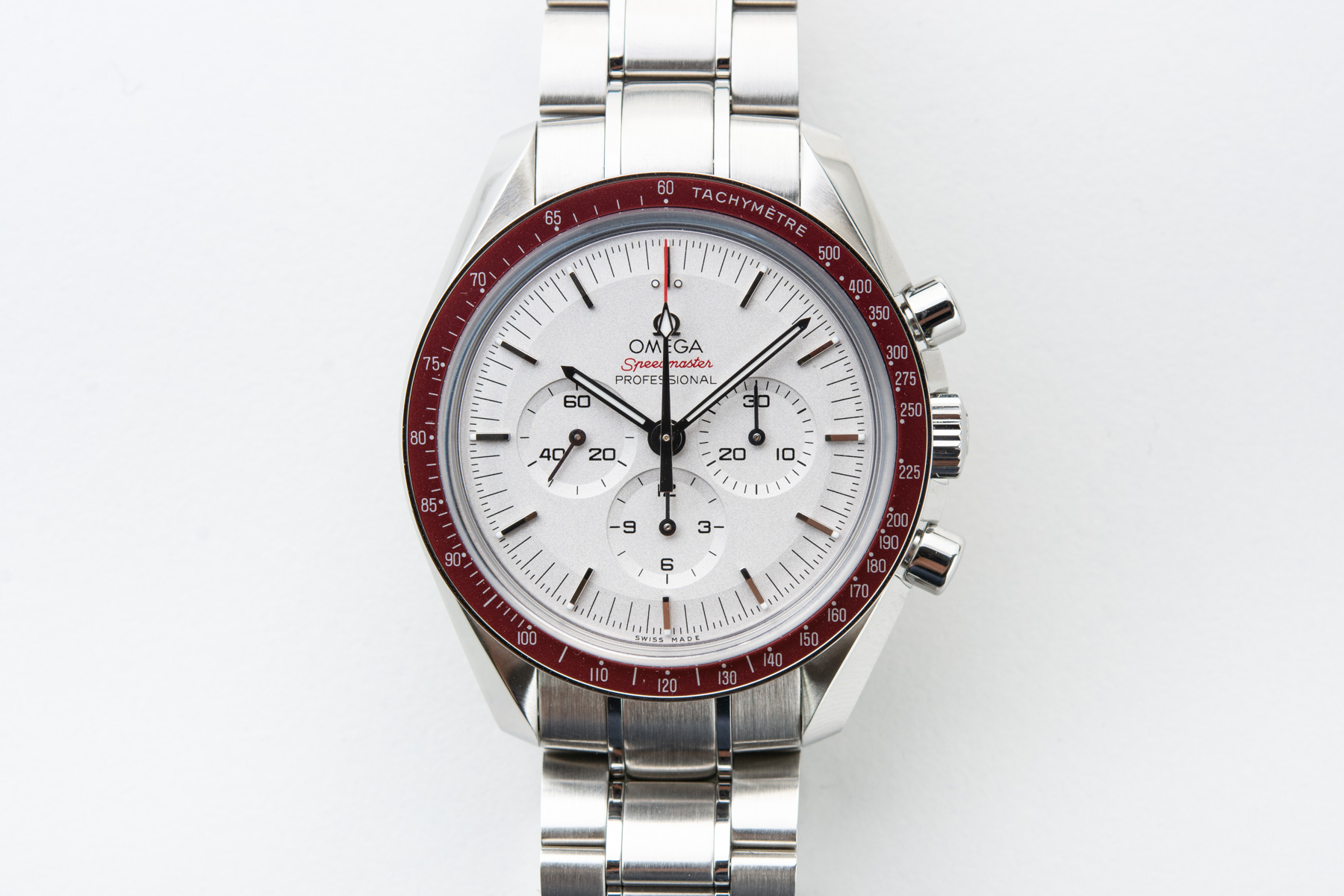 Last but certainly not least, let’s discuss the Speedmaster Tokyo 2020 Limited Edition “Rising Sun”. When taking your first look, the dial might appear to be grey. But upon closer inspection, it almost looks like a platinum dial. This is because it has this really fine grain to it. This watch is also based on one of the Moonphase models from 2016 (just like the green bezel version above). Actually, the inspiration came from the burgundy red bezel model with a platinum dial (you can find it here). To me, this was the most interesting one from the set of five limited-edition Tokyo 2020 Speedmaster watches. Not only because it reminds me of that platinum version from 2016, but also because it is just so different from the other Moonwatch models that I have in my collection.

All these Speedmaster Tokyo 2020 Limited Edition models have the same basic specs. Meaning they feature a stainless steel 42mm Moonwatch case, which houses the 1861 movement. The bracelet is also identical for all five models. It’s the reference STZ004666, which has an easy extension system inside the clasp. 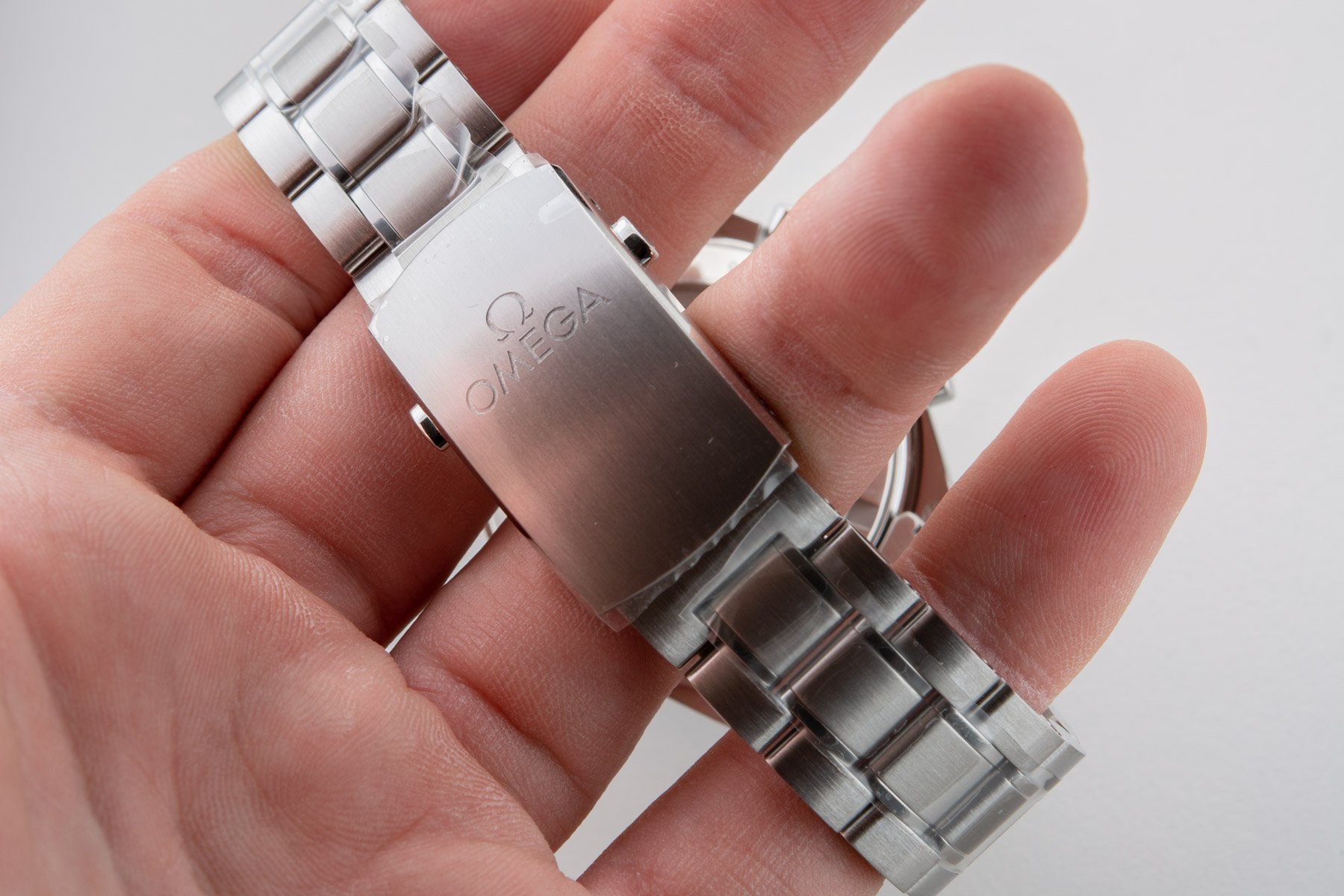 The price of the set of five Speedmaster Tokyo 2020 watches was €33,000 excl. VAT at the time. The watches could also be bought separately (but didn’t come with all the extras, of course). All have since sold out, but you won’t struggle to find them on the pre-owned market. Depending on where they are in the world, prices can vary quite heavily, so make sure you keep an eye on customs & duties when you buy one from abroad.

Interested in what Omega does at the Olympic Games in Tokyo? Click here for our article on their timekeeping technology and history.