About a month ago, during the annual SIHH exhibition in Geneva, Omega introduced a new Speedmaster with moonphase indicator. We wrote about that new caliber 9904 Speedmaster Moonphase here. Besides this new Speedmaster Moonphase Chronometer that will be shown in a few weeks from now in Basel, there is a Speedmaster Professional with Moonphase available as well. It has been in the collection non-stop since 2003 actually (click here to see this watch on the official Omega website). 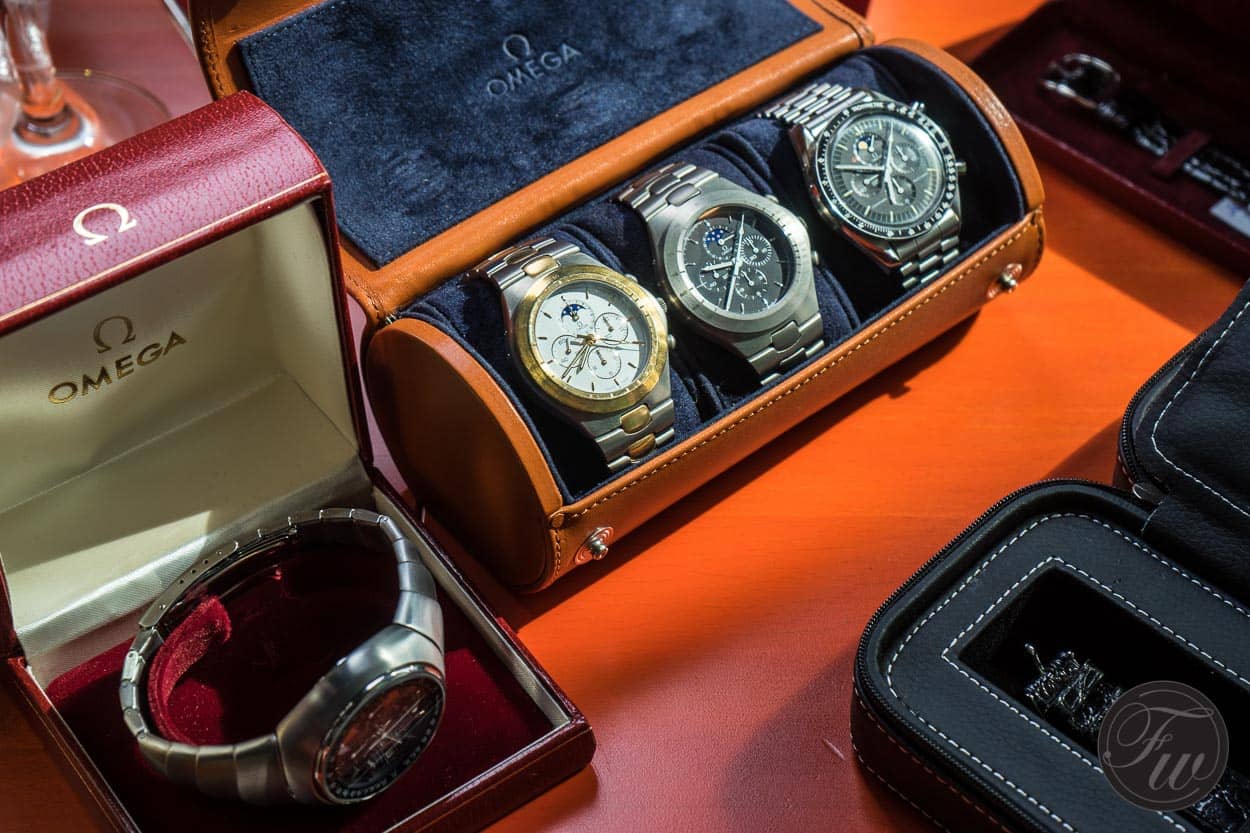 That particular Speedmaster Professional has roots that go back to 1985. In that year, Omega introduced no less than 3 different Speedmaster Moonphase models. All three had this caliber 866 – Lemania based – chronograph movement with add-on module for the moon phases indicator. Only 2000 of these movements were produced, 1300 for the Speedmaster Pro Moonphase ST345.0809 and 700 for the German Speedmaster ‘Teutonic’ model with moonphase indicator. Of those 700 ‘awkward’ pieces, 400 were produced in titanium and 300 in 18ct gold/Ti combination (as can be seen here). 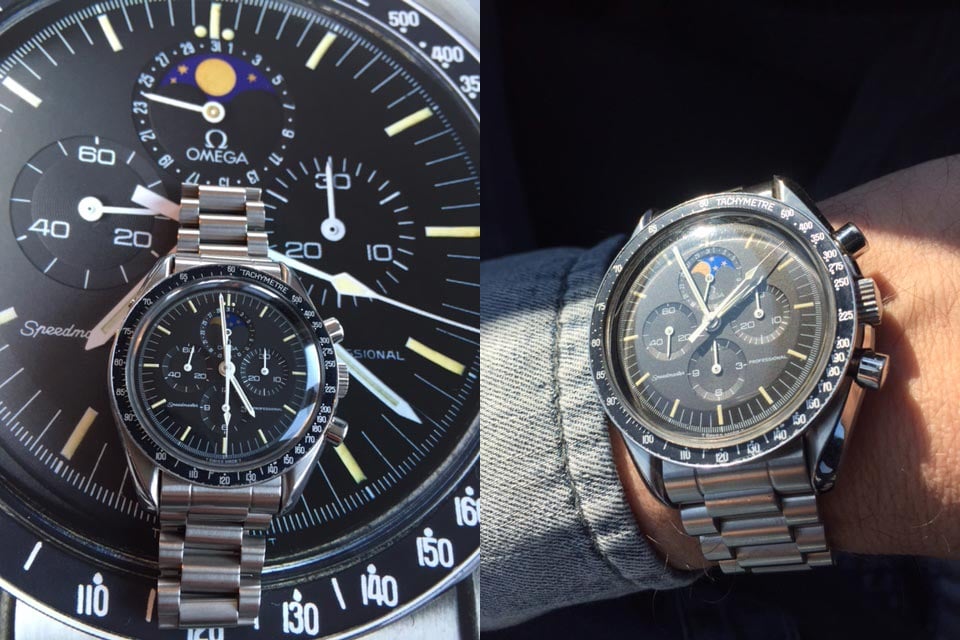 Later on, in 1999, Omega did a couple more Speedmaster (Professional) watches with a moonphase, like the white gold version and the stainless steel models that were based on the Speedmaster’57 Replica edition of 1997. One of the rarest editions is probably this Speedmaster Professional Moonphase skeleton in platinum.

But it all originates from this 1985 Omega Speedmaster Pro Moonphase ST345.0809 (ST145.0809 for the models that were delivered on a leather strap). A friend of the show (@Plexidd_76 on instagram) recently bought a Speedmaster Pro Moonphase from the 1980’s. This model was introduced in 1985 and was produced for 3 years (until 1988), they were never numbered or marketed as a limited edition.  According to Moonwatch Only it is a timepiece that was delivered with several different moonphase discs (three): one with a small Moon, one with a bigger Moon and one with a Moon with a happy face in it. Our reader and friend of the show seems to have the model with the big sized Moon.

On the left side of the case band, there are two correctors: for the date and for the moonphase. My suggestion is to read carefully how to advance the date and moonphase, as you can damage the movement when done incorrectly. 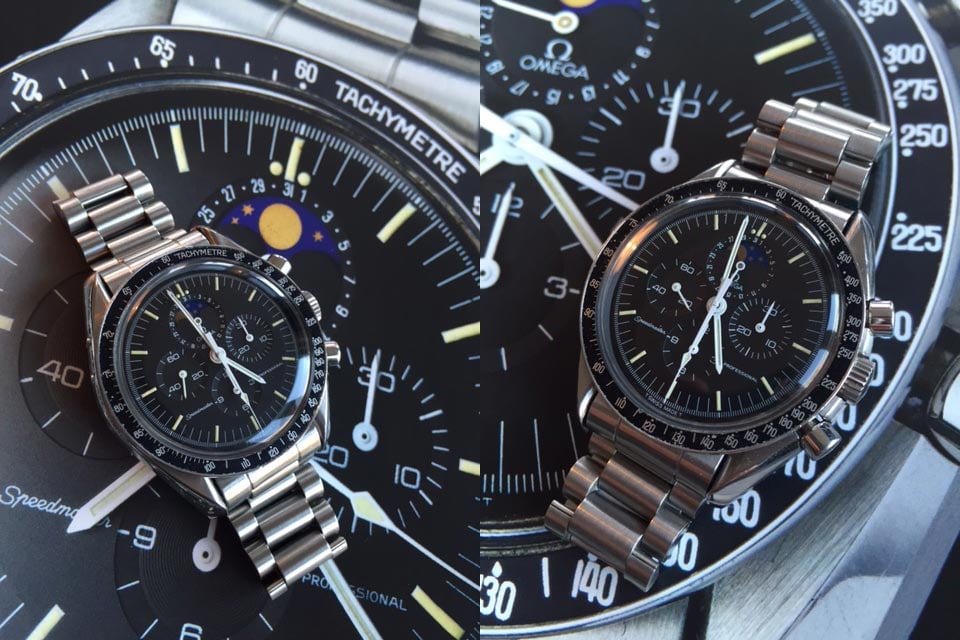 I’ve only come across the red cube boxes these watches were delivered with, but it seems there are also long green boxes (perhaps for the leather strap versions) they used to come with.

Over the years, this Omega Speedmaster Pro Moonphase with only a limited production of 1300 pieces has become a sought-after collectors item for Speedmaster enthusiasts. While the current edition of this watch (easy to recognize, with its silver colored rims around the sub dials) lists for 4900 Euro, the original ST345.0809 comes at a higher price. Expect asking prices around $10.000 USD, but going prices should be lower (7500 USD on eBay on February 14th). It also depends on condition and whether box & papers are there, of course.

Make sure to pay attention to the dial. Replacement dials are often used (and offered) but are easy to identify as there are no T’s around Swiss Made and the printing of the lower half of the calendar is upside down. See below for such a redial. 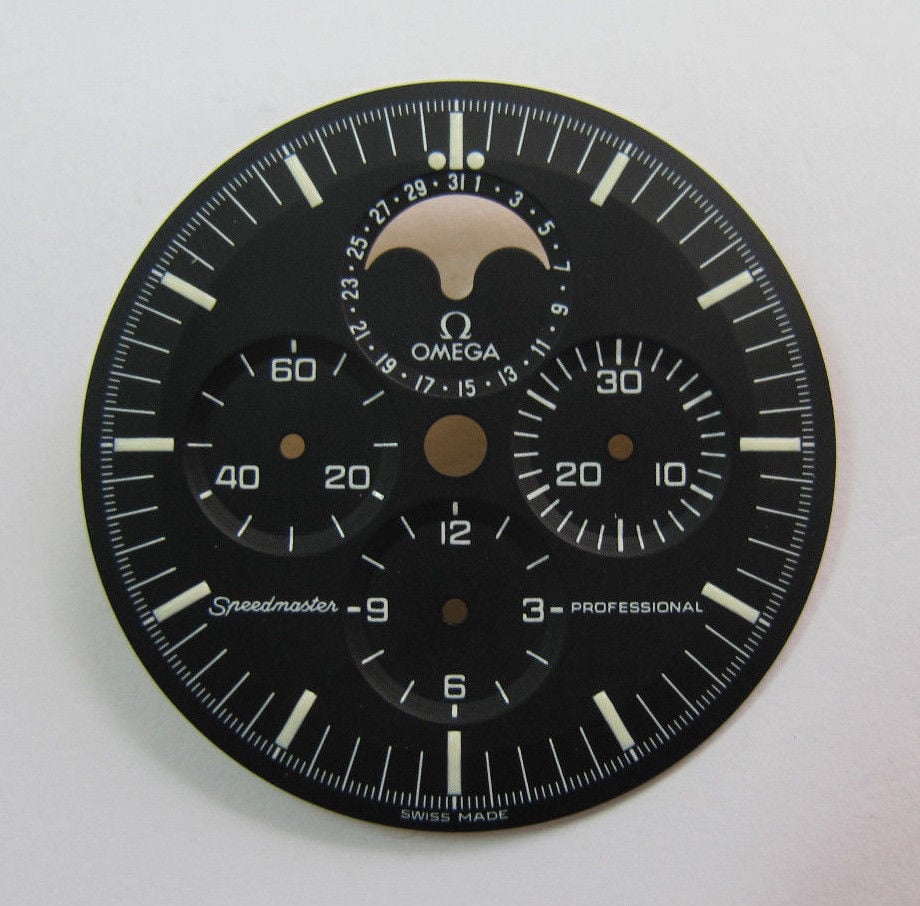 A replacement dial, no T’s around Swiss Made and the lower half of the calendar dates are upside down (9-21)

Master head image taken by NielsZ during our Speedmaster GTG in Düsseldorf.

Hot Topics
Introducing: The Omega Speedmaster Super Racing With Spirate System
165 comments
Design Vs. Specs — Which Is More Important To You When Buying A Watch?
87 comments
New Release: The Limited-Edition Seiko Prospex SLA067J1 Diver
59 comments
My Predictions For New Omega Speedmasters In 2023
57 comments
The Time To Buy Is Now: How The Current Economic Climate Influences Watch Buying And How You Should React
51 comments
Popular
Rolex GMT-Master History And Overview Of All Major References
Robert-Jan Broer
21
Hands-On With The Seiko Prospex Dawn Grey Series
Robert-Jan Broer
12
You Asked Us: Nomos Orion as a dress watch?
Gerard Nijenbrinks
10