It’s Speedy Tuesday! One of our readers, Rob, mailed us with some great news. He purchased a beautiful Speedmaster Professional 105.012-66CB from the first owner.

Rob explains: “….. the watch was purchased by the previous owner while he was in the medical corps of the Navy (in the midst of the Vietnam War, although I’m not sure if he actually wore it overseas or saw action). He wore it for a little while, but eventually moved on to something else and basically just left it in a drawer for decades. Thankfully, the original papers were kept with the watch and given the light use over the ensuing decades, the case and dial are quite possibly the cleanest I’ve ever seen for this reference.”

It is uncertain where this beautiful Omega Speedmaster Professional 105.012-66CB was bought originally, but the watch was bought in 1968. The Speedmaster Professional 105.012-66CB was made from 1966 till 1968 and the serial number (or movement number, as Omega officially calls it) refers to somewhere 1967. Unlike many Speedmaster enthusiasts think, the year in the reference number doesn’t automatically refer to the production year of the watch. You always have to check the serial number to be certain. Omega keeps track of two dates actually, the serial number that refers to the production date and the date it was delivered to one of their agents. Then, of course, you have the date when the watch was sold. There can be quite a bit of time between those dates, for various reasons. 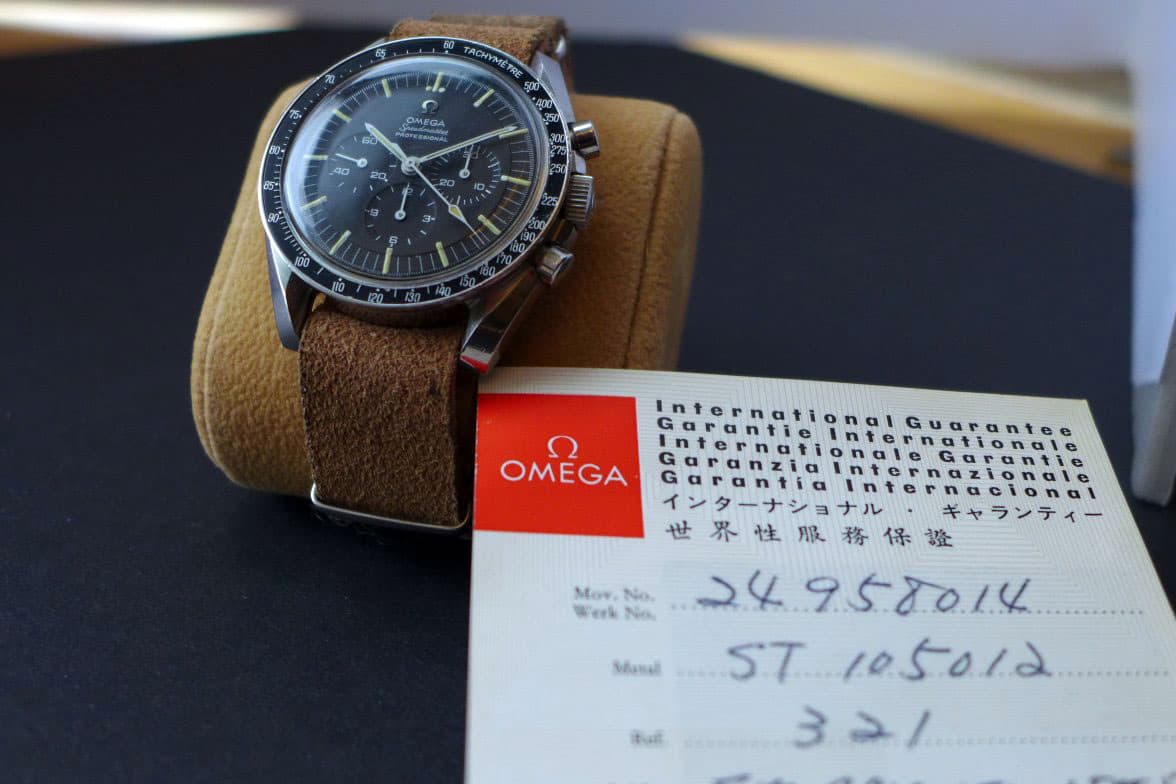 Another interesting aspect about this Omega Speedmaster Professional 105.012-66CB is the ‘CB’ part. CB stands for Le Centrale Boites and was one of the (two) case makers used by Omega for the Speedmaster. The other case maker was Huguenin Frères. There are some differences in cases made by these two manufacturers, which is ‘unthinkable’ these days, as the specifications that are supplied by the brand should be leading at all times. However, it was in a different era and perhaps CB had good reasons to do things differently from HF. The CB cases are becoming more difficult to find in an unpolished condition but the good news is that it is very easy to spot. The lugs happen to be a bit more flat on the upper side, and have this very thin facet next to it (on the inside). This thin facet is easily gone when being polished and an easy way to detect sloppy polish-work.

Rob bought this Speedmaster Pro 105.012-66CB with the original warranty papers, which where then filled-in by hand (name of the buyer, serial number, reference number and date of the sale). It is interesting to see that the original owner had his name and title engraved in the case back. I personally like this type of ‘personal history’ on a watch. It shouldn’t influence the value of the watch as far as I am concerned in negative nor positive way. The condition of the watch is much more important. 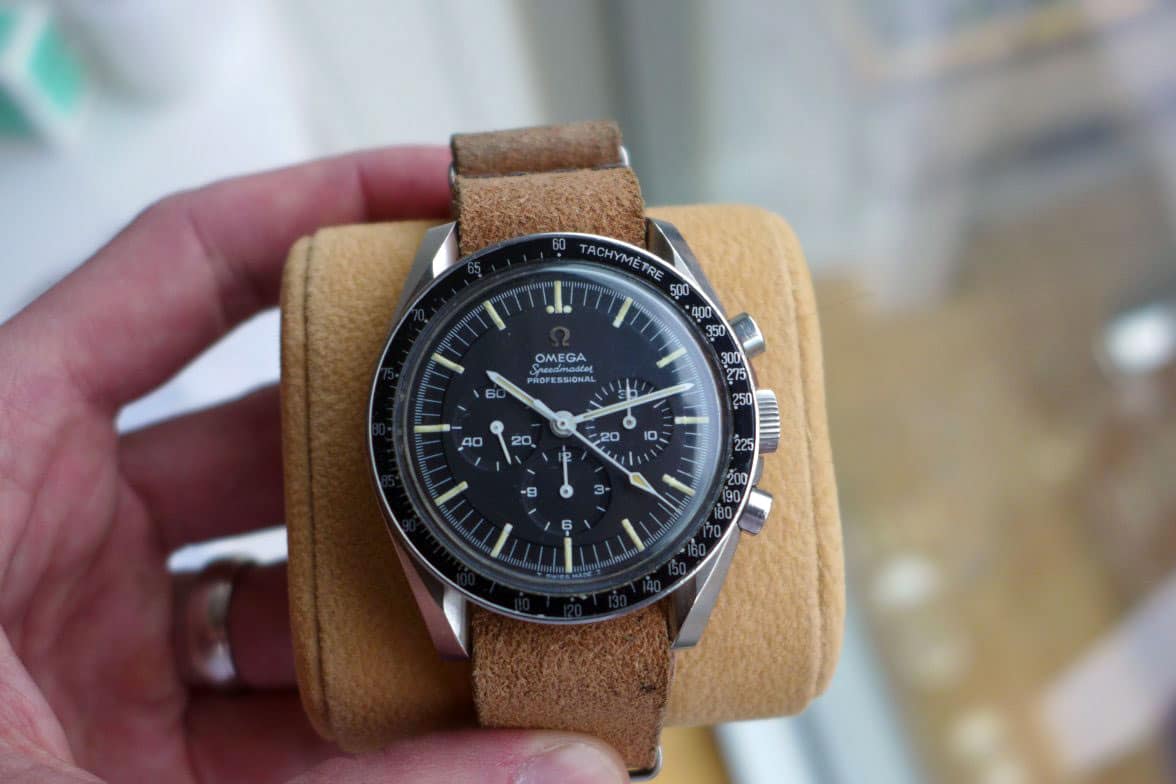 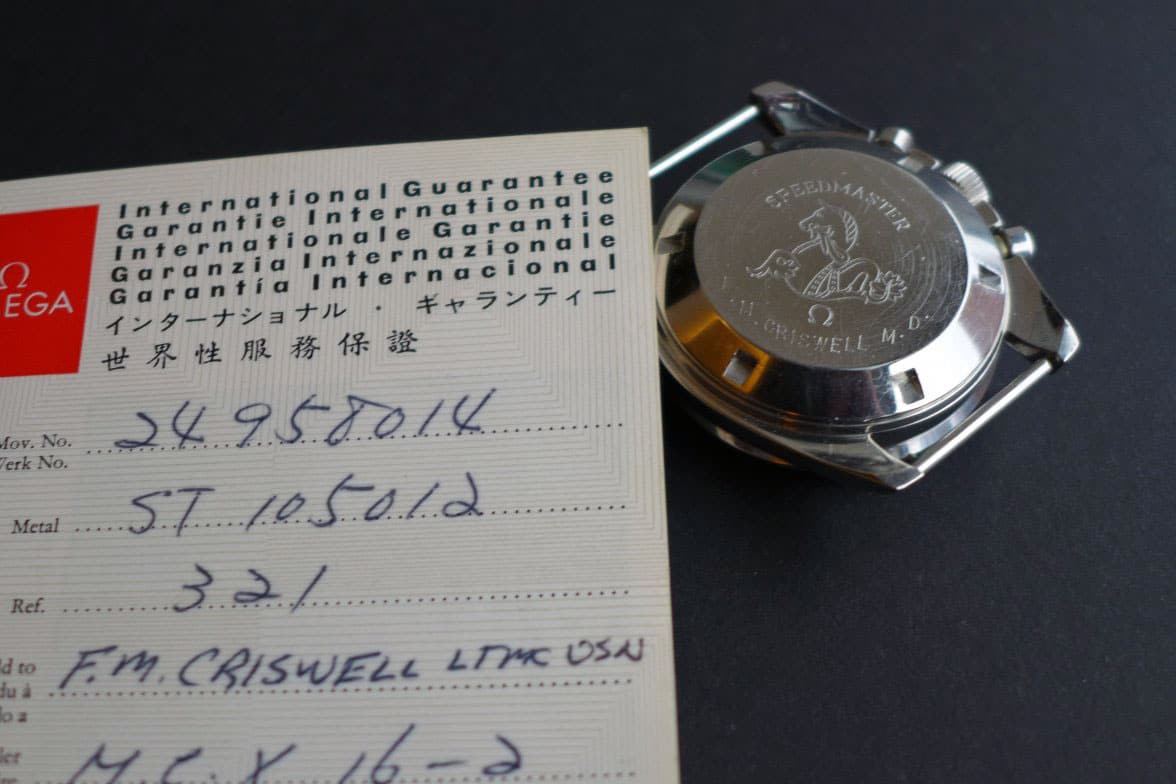 Our reader got into mechanical watches just 1.5 years ago, and from the start, he knew that the Omega Speedmaster was something special. As he described it in his e-mail to us, “it was apparent that a Speedmaster was universally recommended for anyone’s collection, regardless of one’s wealth / penchant for expensive pieces. The history, in my very humble opinion, is unmatched by any other sport watch and the design is perhaps the most unchanged of any watch that’s been in production over a similar time period. In short – it’s historically significant, timelessly designed, rugged, and able to be had at a relatively affordable price (especially 145.022’s and other 861 calibers).”

Like many other (starting) Speedmaster collectors, Rob was first after a 145.022 from a very early period, preferably the transitional model that has the applied Omega logo but with the caliber 861 movement. A very cool looking watch with the aesthetics of the 145.012 and 105.012 but about half the price of those. However, his first buy was actually a Speedmaster reference 105.003-65 he stumbled upon in Denmark. No more than six months later, Rob added this beautiful Omega Speedmaster Professional 105.012-66CB to the collection as well. Quite an amazing start for someone relatively new into watches (and Speedmasters). 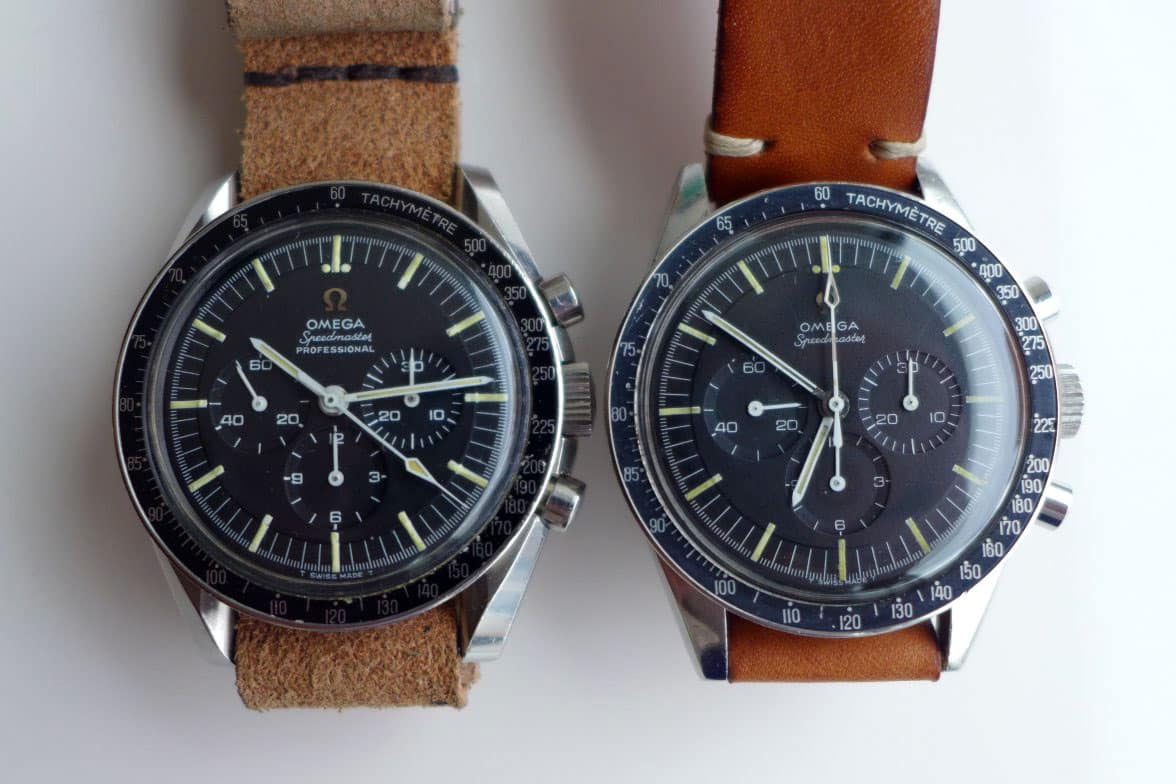 When asked how to go from here, he answers: “In six months, I went from no Speedies to both a straight lug and a CB professional, so I’m not sure where to take the hobby from here. 2915’s are impossible to come by and I’d probably be too afraid to ever wear it, so I think the dream Speedy would be a 2998 with lollipop chrono hand. Obviously, I don’t expect to find it any time soon, but I also didn’t expect to find the other two, so who knows!”

A big THANK YOU to Rob for playing along and sharing his story and photos. Please contact us if you also want to have your story and Speedmaster featured here on Speedy Tuesday.