Why can’t horology be a little bit more playful from time to time? This is a question to which Studio Underd0g provides the answer with each new release. The ultimate proof that the watch industry can be playful comes courtesy of an 11-year-old girl that designed this very special Halloween-inspired pumpkin version of the Studio Underd0g chronograph. Her idea resulted in two stunning pieces, one of which will go up for auction to raise money for charity. Let the bidding commence!

Earlier this year, we had the pleasure of teaming up with Studio Underd0g for the April Fools’ Aubergine Chronograph. All profits from that special collaborative effort went to Cancer Research UK. Now Studio Underd0g is back with another special timepiece for a good cause. This time, the brand’s founder Richard Benc decided to bring a child’s vision to life with the new Studio Underd0g Pumpkin Chronograph. This spectacular version of the brand’s signature model will be auctioned off to raise money for Mary’s Meals. The playful watch is the perfect way to raise money with a smile. 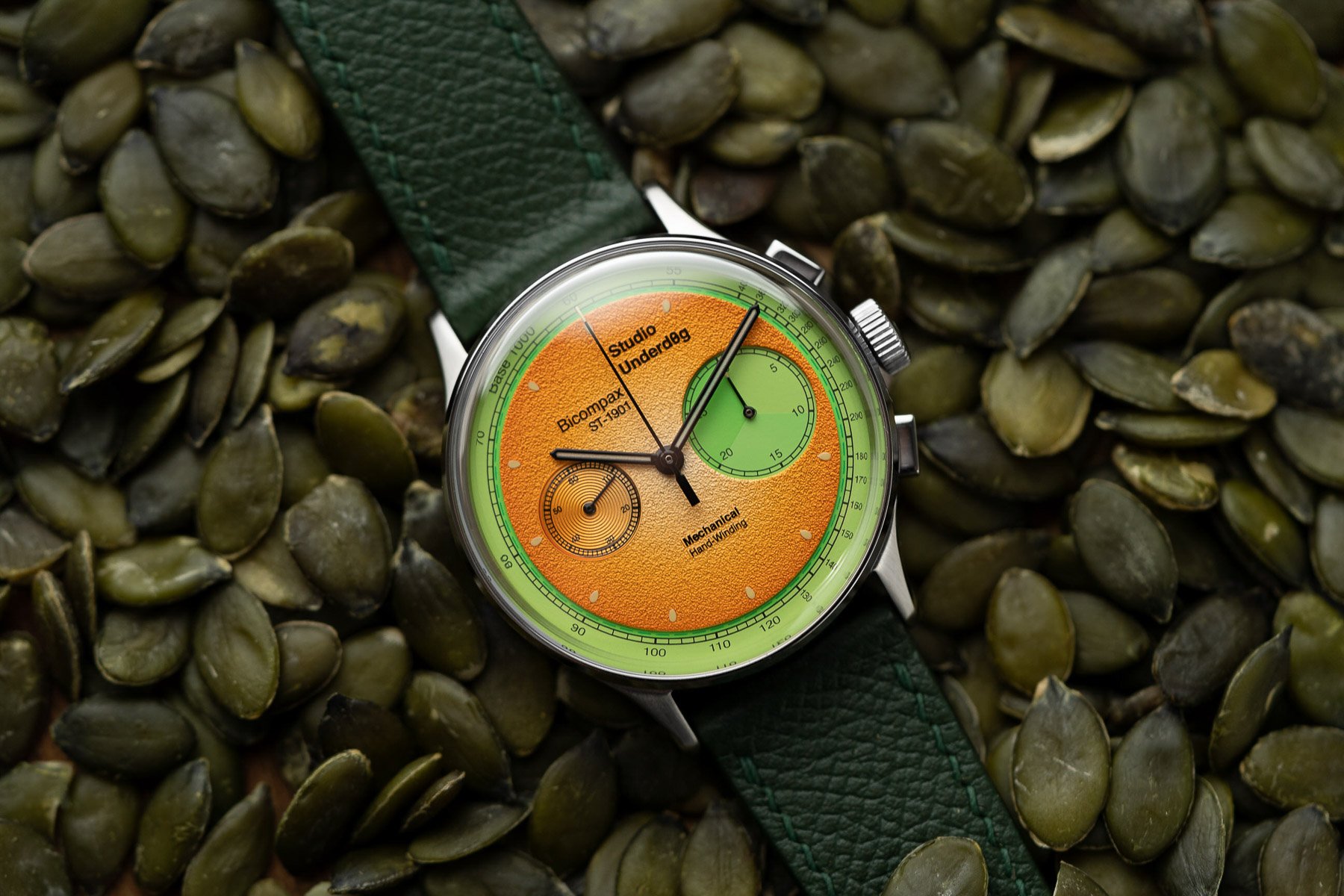 The story of the Studio Underd0g Pumpkin Chronograph

The story of the Halloween-inspired Pumpkin Chronograph is a simple but very sweet one. The creative idea comes courtesy of an 11-year-old girl. Her stepdad and his partner both own different Studio Underd0g models, and after seeing them, she was inspired to create her own colorful version of the chronograph. She based her version on the colors of the inside of a pumpkin and its seeds. The combination of orange and green turns out to be the perfect Halloween-themed version of the Studio Underd0g Chronograph. 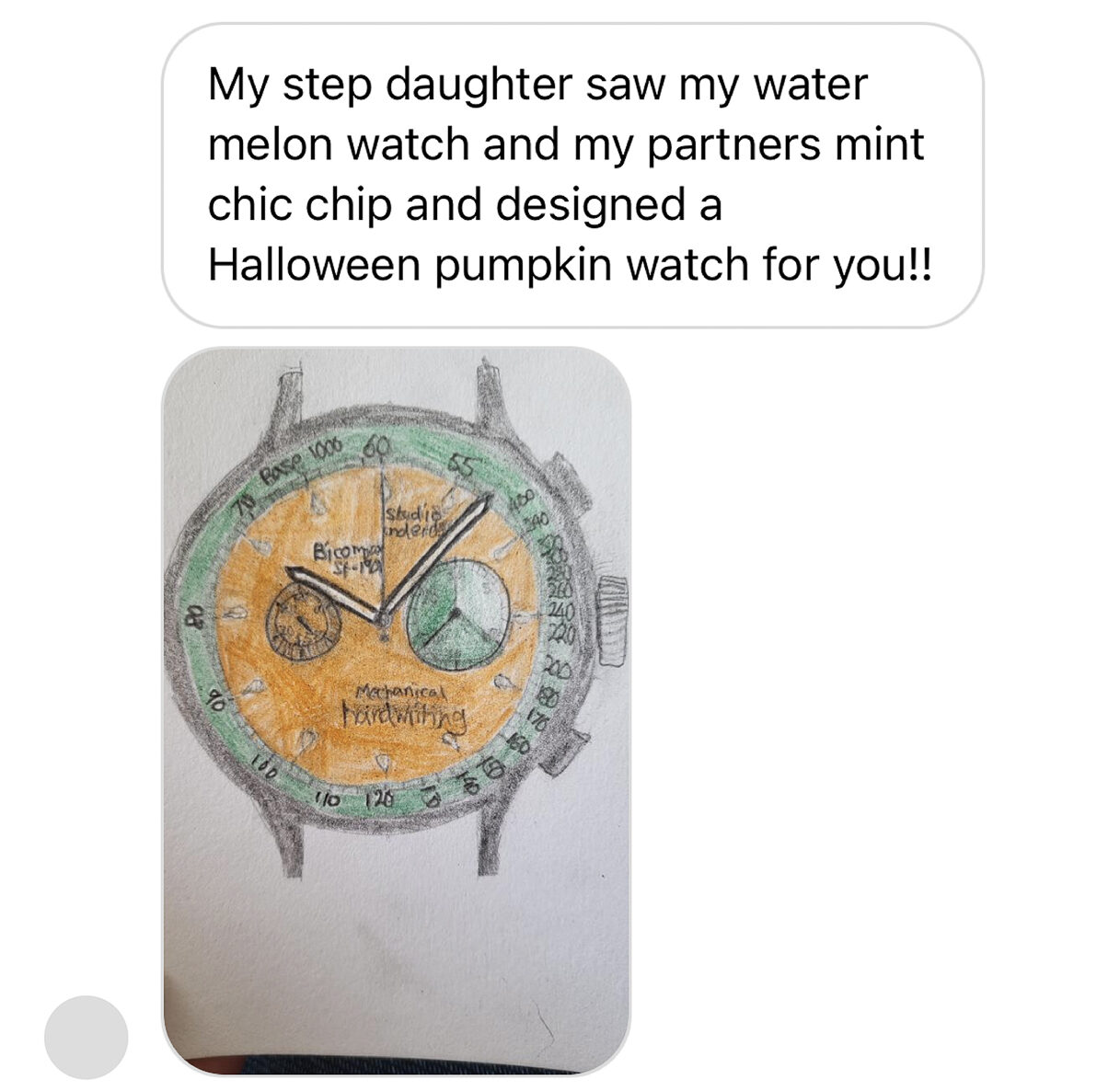 The dial design of the Studio Underd0g Chronograph lends itself perfectly to the playful use of colors. This time, Benc executed the central part of the dial in bright orange to represent the flesh of a pumpkin. The central portion also features the familiar grainy texture that we’ve seen on previous versions of the watch. Both the periphery of the dial with the tachymeter scale and the oversized chronograph counter at 3 o’clock are executed in a bright green color representing pumpkin seeds. And if you look closely, you’ll see that the hour markers are shaped like pumpkin seeds too. Finally, the watch comes on a handmade Forest Green Epsom calfskin strap from The Strap Tailor that finishes the striking looks of this stand-out piece. 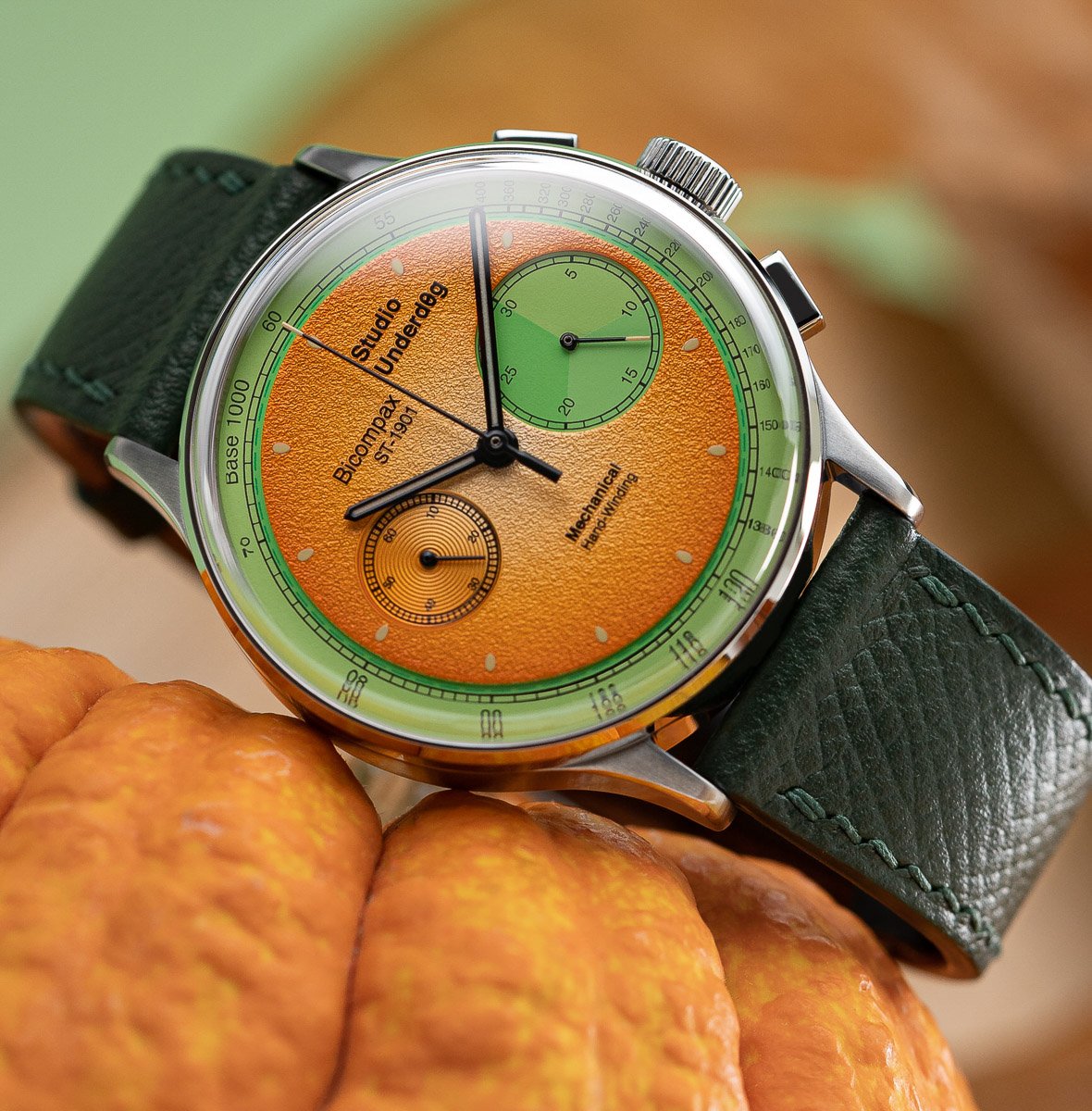 The Pumpkin Chronograph features the same set of specifications as previous releases from the brand. It comes with a 38.5mm stainless steel case that is 13.6mm thick including the crystal. Excluding the crystal, the watch is 10.8mm thick. The case has a 44.5mm lug-to-lug and a 20mm lug width. It also utilizes a three-part construction with a screw-down case-back and a signed crown. Hovering above the colorful dial are the slim hands, which feature Super-LumiNova C3 for readability in darker conditions. 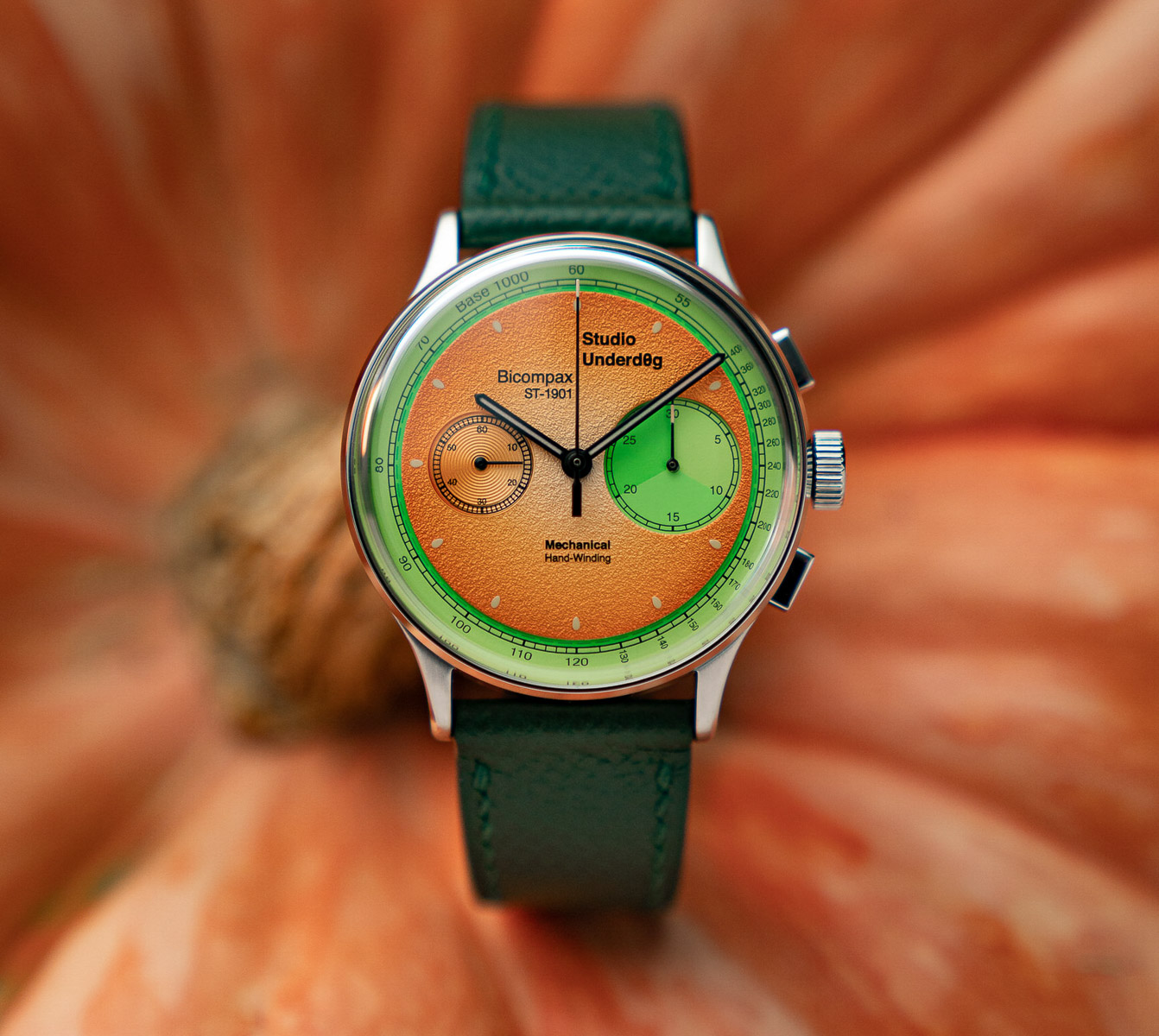 A watch created for Mary’s Meals

As mentioned in the intro, Studio Underd0g will produce two of these special Halloween-inspired timepieces. The first was already created and gifted to the 11-year-old girl responsible for the colorful design. The second will be auctioned to raise money for Mary’s Meals. This charity serves life-changing meals to children living in 20 countries across Africa, Asia, Latin America, Eastern Europe, and the Caribbean. After the auction, 100% of the proceeds will be donated to Mary’s Meals.

Starting today, this special auction will be hosted on eBay via the “eBay for Charity” program with a starting bid of £0.01. The auction will be live for one week and will end on October 24th at 4:00 PM CEST (3:00 PM BST). The winner can expect to receive their watch within days of the auction ending. Therefore, the new lucky owner will be able to wear the watch for Halloween on October 31st. 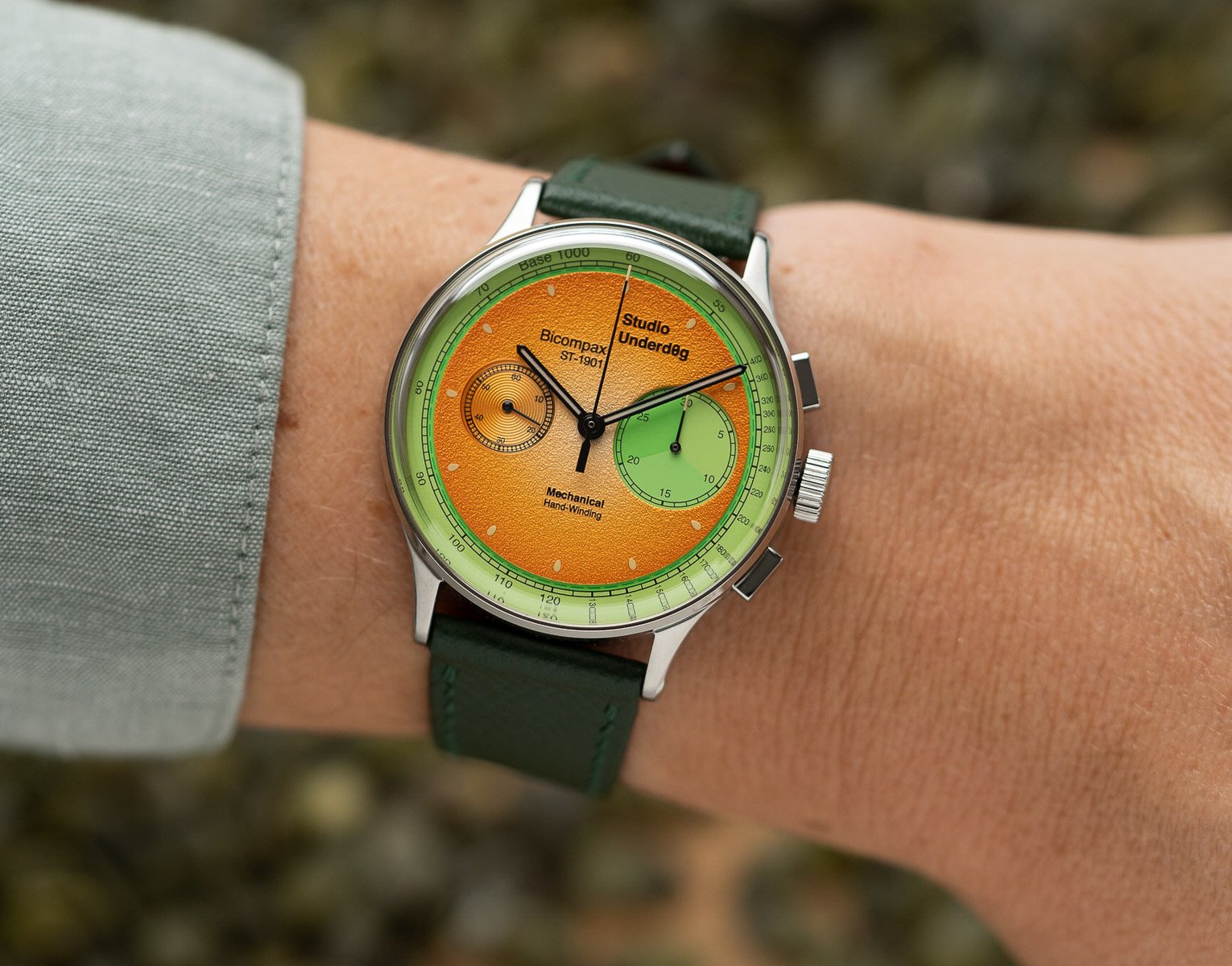 All for a good cause

After the April Fools’ Aubergine Chronograph, it’s great to see Studio Underd0g’s founder release another special edition to raise money for charity. Additionally, it’s lovely to see that he was able to create another playful version of the brand’s chronograph with the help of the creative mind of an 11-year-old girl. This special release brings a big smile to all of our faces just in time for Halloween! 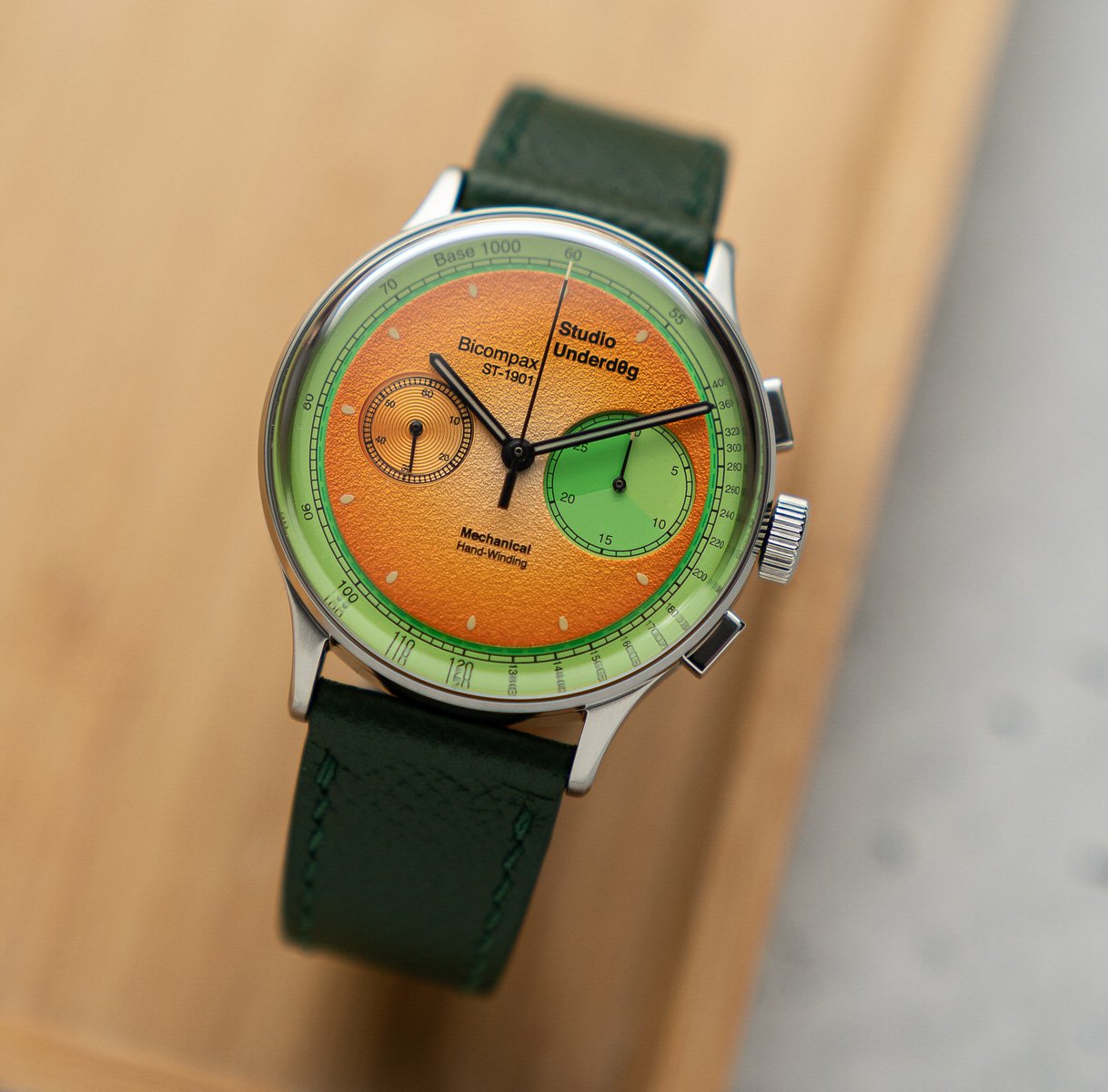 In conclusion, this new Studio Underd0g Pumpkin Chronograph is perfect proof of the playful character of the brand’s base model. Secondly, it shows the nearly endless possibilities when it comes to the execution of colorful dials. Above all, let’s hope Studio Underd0g is able to raise a nice amount of money to support Mary’s Meals. If you’re interested in this project, you can access the auction on the special eBay Charity Auction page. Furthermore, if you want to learn more about Studio Underd0g, check out the brand’s official site here.