Last January when Cartier presented the ‘Drive de Cartier‘ watches at the 2016 SIHH in Geneva, there was a lot of traffic at the Cartier booth. Almost every journalist talked amongst each other about this new watch, in the corridors. Cartier is always presenting quite a few watches at the annual show in Geneva, but it’s not every year that ‘La Maison’ launches a steel mens only model, in the main stream category. Well a mens watch ‘the Drive’ certainly is, not because of its robust dimension of 40 x 40mm, since ladies wear any size these days, but because of its masculine styling and details. 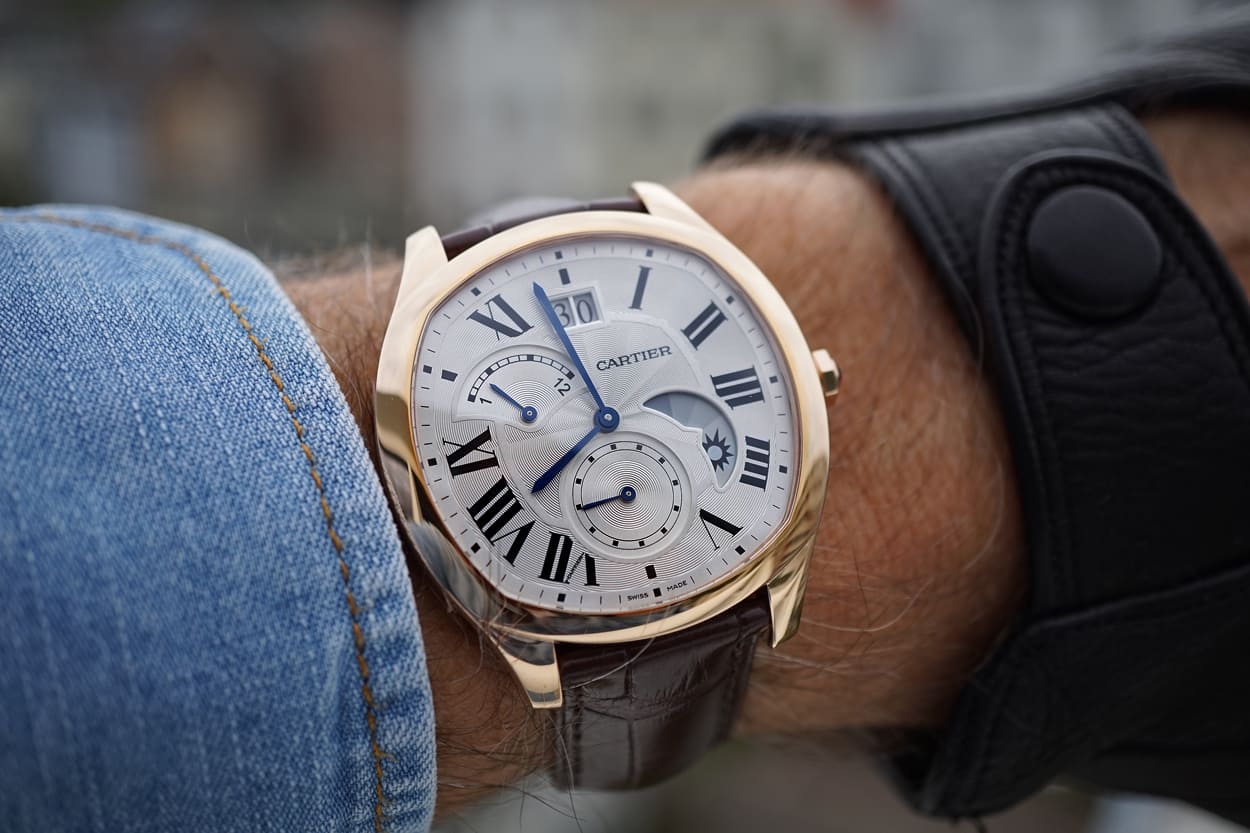 We had to wait about seven months before the second model, with Grande Date, Retrograde Second Time Zone and Day/Night Indicator, became available for review, but boy that was worth the wait! As I mentioned earlier in my article about the ‘Time Only’ model, the  Drive de Cartier has quite some wrist presence, due to the large case and clean dial. That spacious dial, now gives room to some very nice and useful complications. To start with the Grande Date @ 12.

In general I am not a date person at all, but a ‘Grande Date’ to me, has a certain class and is really something else, than a regular date window. Centered and placed at the position of  the 12, it looks very prominent and keeps the off centered dial, very well in balance. It gives the dial a modern and less traditional look. 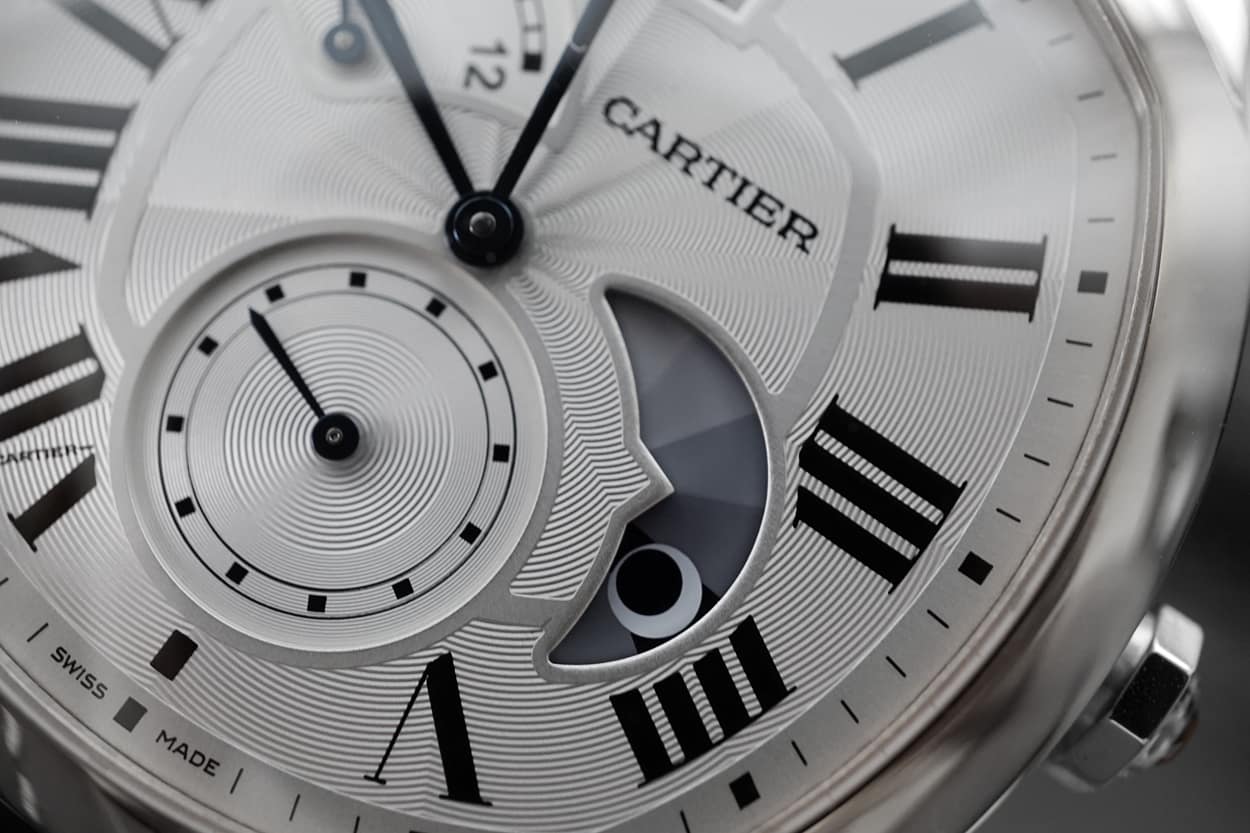 Next complication is the ‘Retrograde Second Time Zone’. This feature I like a lot, since it is so convenient when traveling. Positioned @ 11 and  showing twelve hours, makes this feature very easy to read and much better looking, than a round sub-dial. The Day & Night indicator, shows immediately, if it is too late or too early to call home, during an overseas trip. Changing the time zone, which is  often a hassle, is just a simply push on the crown, while the blue grey tones, of the Day & Night indicator,  give some soft color to the dial, without making it a loud or gimmicky. A  sub seconds dial, as we know from the ‘Time Only’ model for instance, always has my preference and it gives the watch a much more serene look, than a sweep seconds would have done.

Thin Sides of the Case

Lots has been said about the shape of the case and apart from the style and looks, the technical part of the design is very clever done. When the watch sits on the wrist, it looks a lot thinner than the specified 11.25mm. It fits easily under a cuffed shirt. 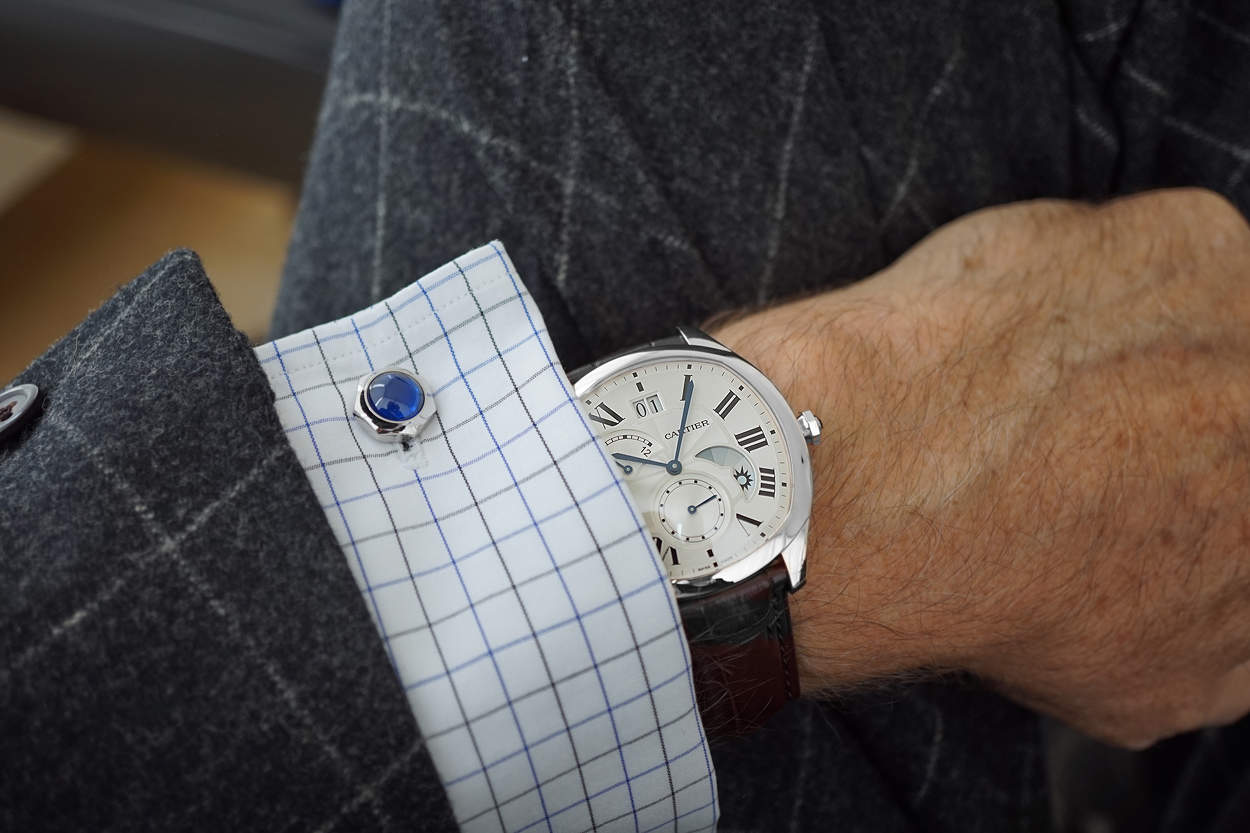 This is achieved by the thin sides of the case. The back is a bit thicker, but is hardly visible when the watch is on the wrist.

For the ‘Time only’ model, Cartier used the 1904MC-PS caliber. This was the first automatic caliber Cartier build in their new Manufacture in La Chaux-de-Fonds. It was not the first caliber Cartier ever created themselves. Cartier developed at least two in-house calibers ‘Tank a Vis’ models in 1999. The caliber 1904-FU MC, that is used for this new Drive with complications, was first presented in 2014. 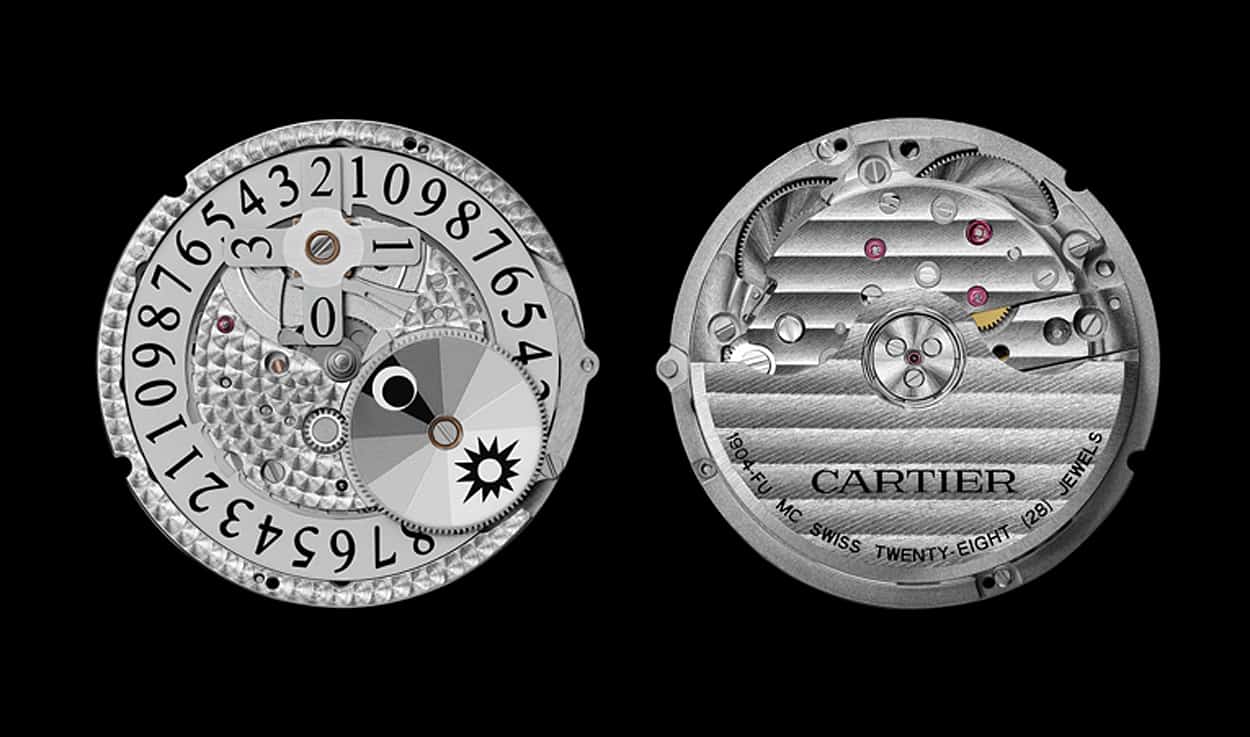 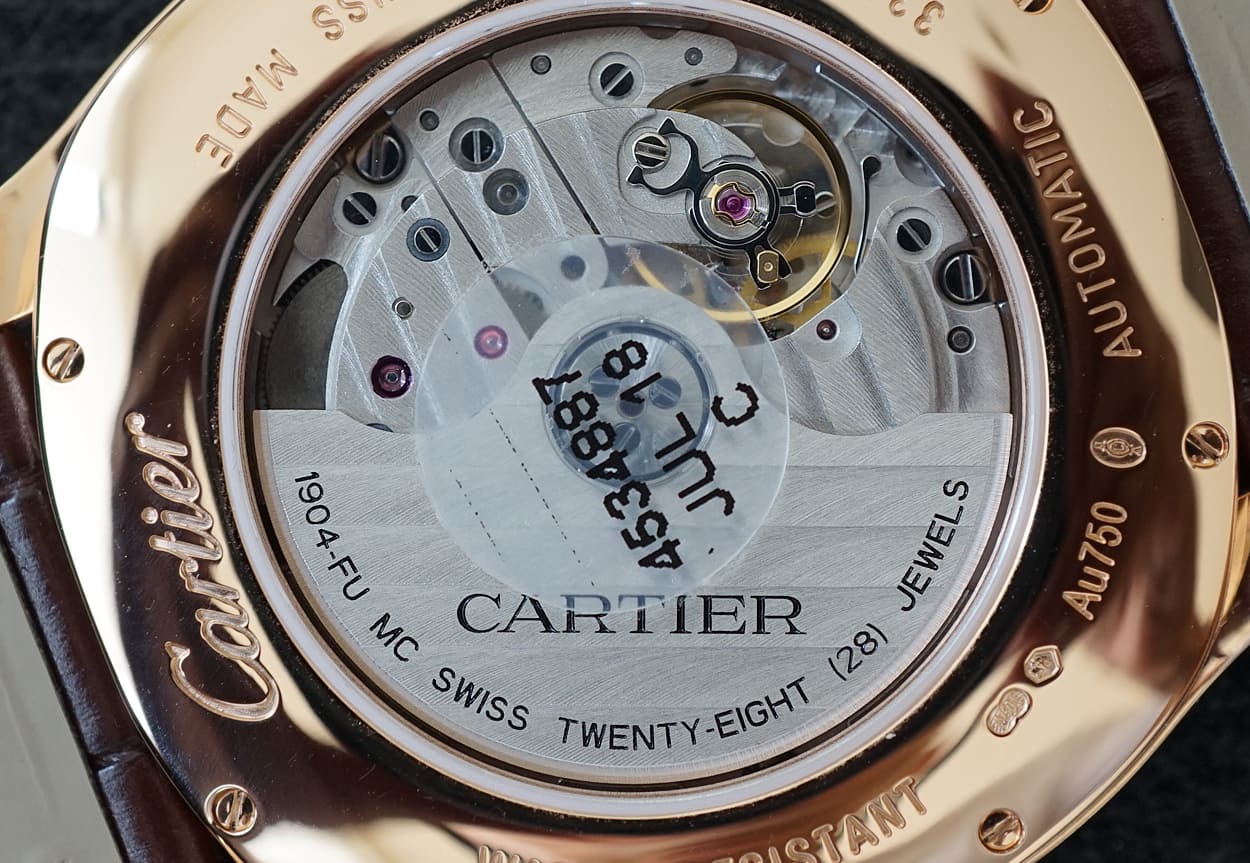 This self-winding movement has been developed over a period of several years, and it combines the just described retrograde second time zone display, the day/night indicator, the large date and small seconds, with all complications coordinated directly by the crown! 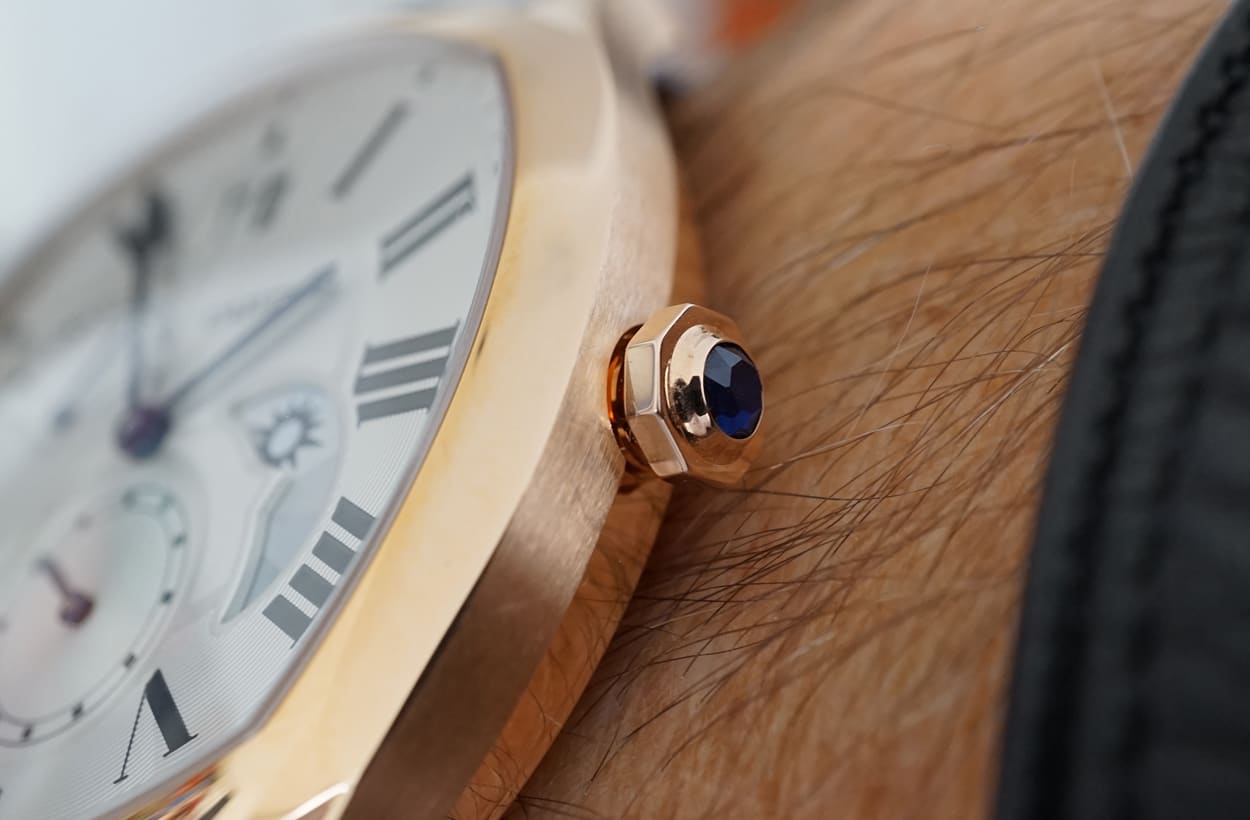 – All complications coordinated directly by the crown –

A transparent case-back is always something, most men like and in this case it  reveals the Geneva Stripes on the bridges and on the rotor of this exciting Manufacture Caliber. What absolute needs to be mentioned is the domed crystal. It gave me a hard time photographing the watch, but it is an important factor that makes this watch look and feel really, really good. (Pardon me for the piece of tape, on the left side of the case) 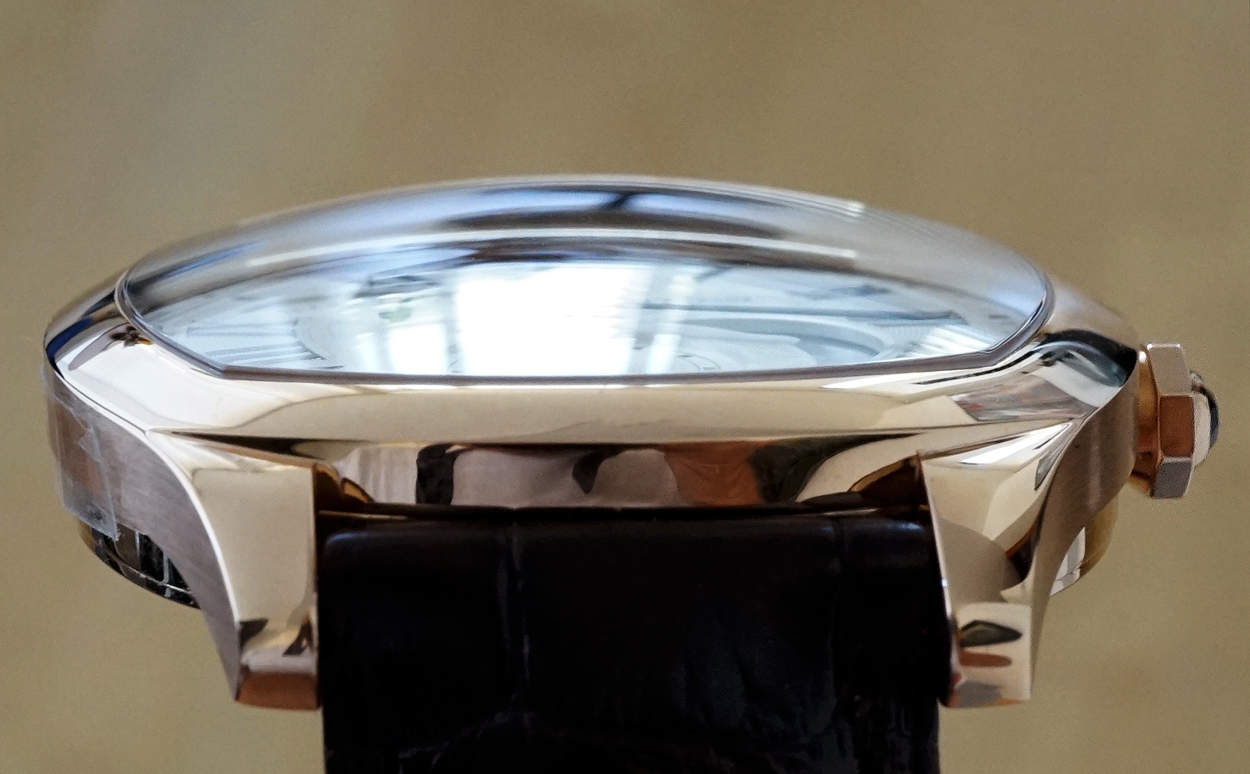 – The domed crystal of the Drive de Cartier –

The 1904-FU MC caliber was at first used for the smart looking ‘Rotonde de Cartier’ series and in case you find this watch too elegant, or may be too dressy, try this new Drive de Cartier . While both models, the Rotonde and the Drive, share the same caliber and have an almost identical dial, they are worlds apart in terms of looks and wrist presence. The Drive de Cartier certainly has more testosterone, is a 100% men’s time piece and will give you more opportunities to dress up- or down, than the refined  ‘Rotonde de Cartier’.
If you haven’t seen the watch in the flesh and wonder how the size behaves compared to other watches, have a look at the Drive-, pictured here next to the Rotonde de Cartier. On the wrist there is hardly any difference in size and feel with the 42mm Rotonde case. 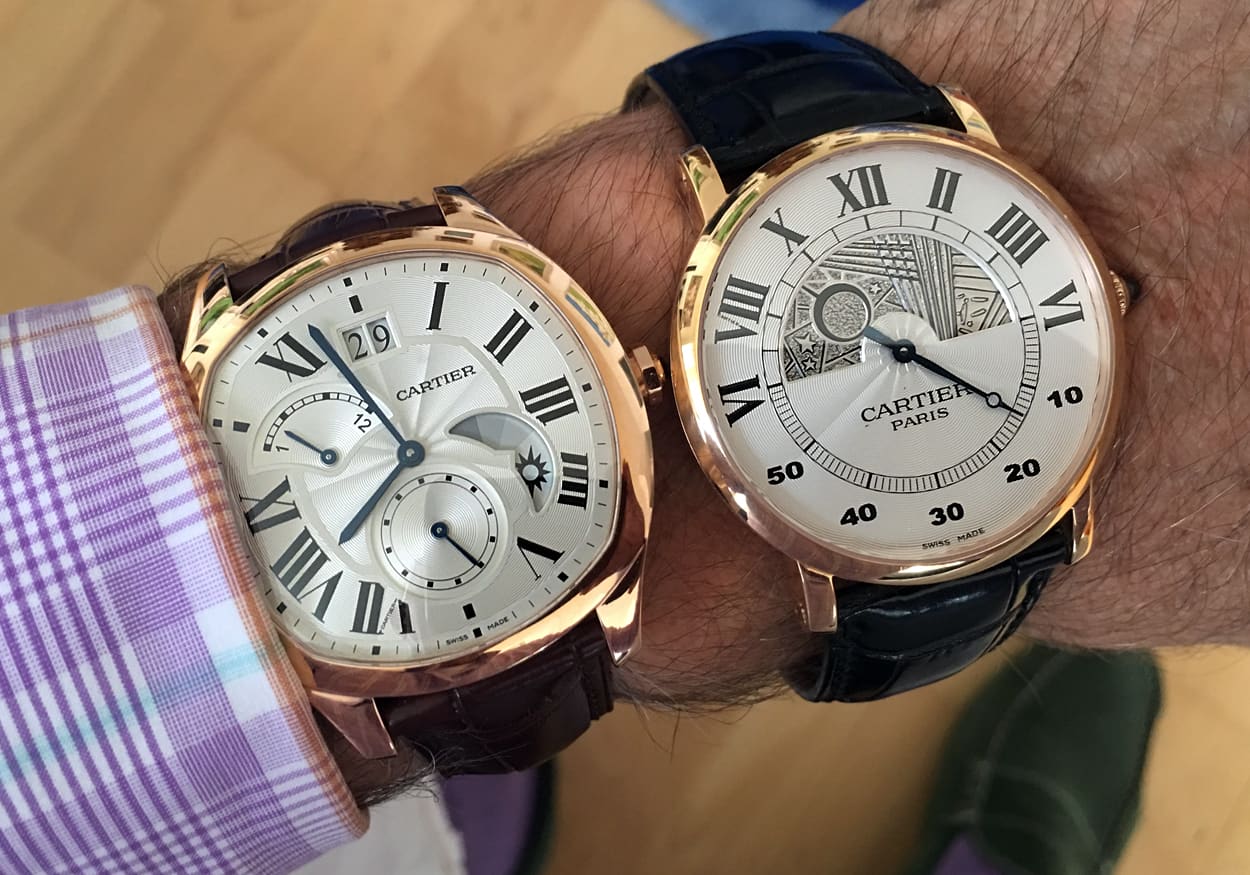 About this new ‘Drive de Cartier’ line, it is often said that there are traces to the world of sporty cars. And indeed the patterning of the guilloché dial, resembles the design of a radiator grill, but also that sweet sub-seconds at 6 o’clock, breathes the atmosphere of sports cars. But a Drivers watch, like the Cartier Driver from 1936, that had to be worn on the inside of the wrist, or the Tank Asymetrique with the twisted dial, it is certainly not and and it was also not intended to be. 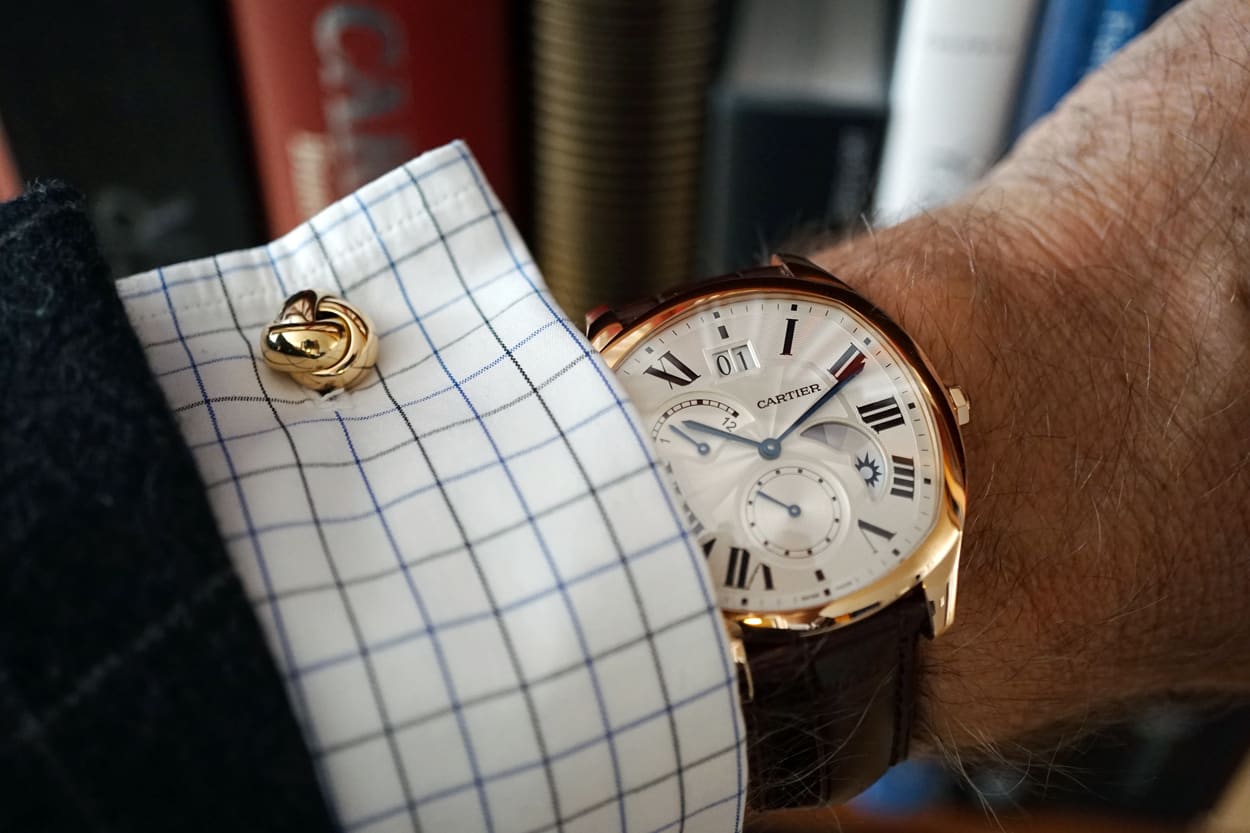 I see this this particular model as the every day watch for the well-traveled  man. The man that’s often in touch with friends and relatives all over the world, that feels as much at home wearing his suit, as his jeans with a short sleeve shirt at a barbecue with friends. The guy that needs a stylish good looking watch, that’s not over the top to take anywhere. 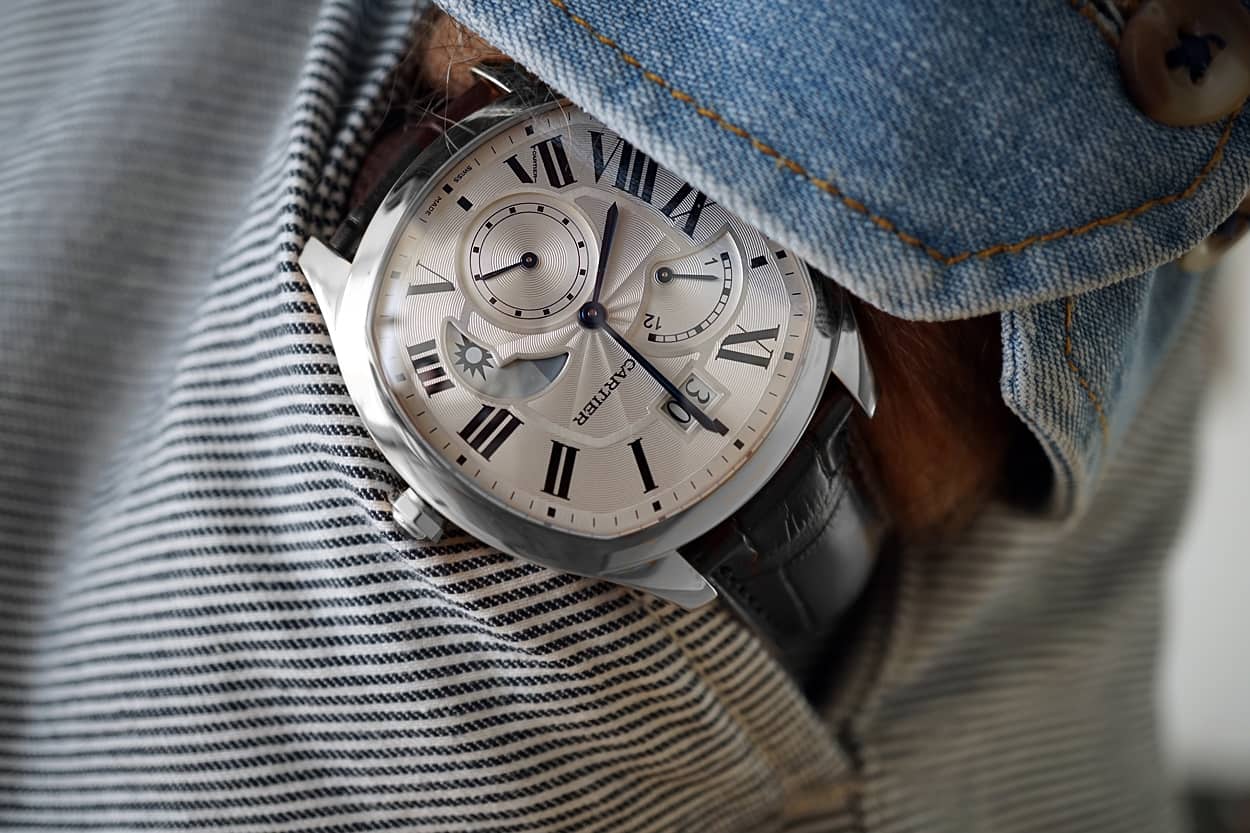 It has been a while that I was so enthusiastic about a new model, as this version of the ‘Drive de Cartier’, where everything seems to be right and…. to my liking. 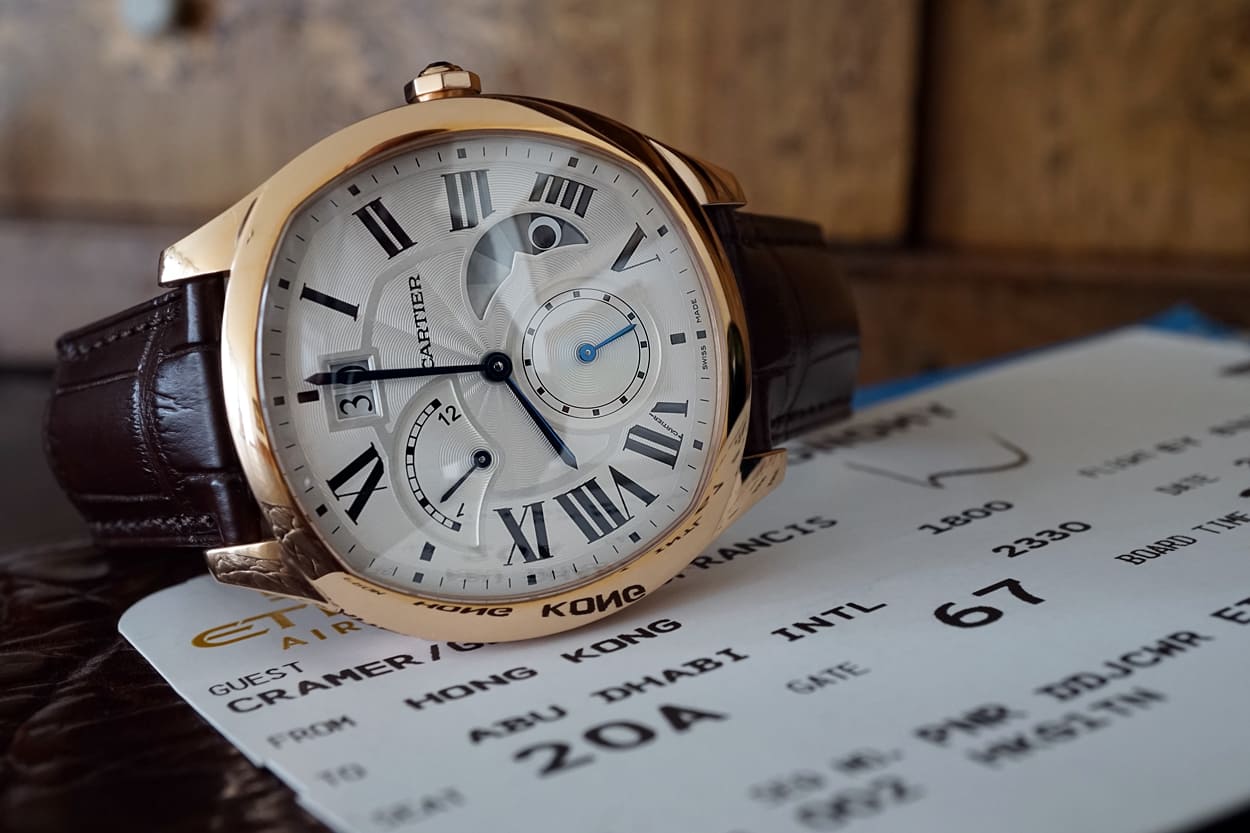 Kudos to Cartier for releasing the steel and the gold version simultaneously and applause for the price setting of the steel version. The ‘Drive de Cartier’ (reference WSNM0005) in steel with the automatic complicated manufacture caliber 1904-FU MC, will set you back, Euro 8.350,- (VAT included) and that’s really a very attractive price for this masculine dream of a Drive. The pink gold version (reference WGNM0005) will be available for Euro 22.100,- (VAT included).

Both versions will be in the Cartier boutiques from the first week of September.

– All complications coordinated directly by the crown –