Bonjour! This Sunday Morning Showdown should actually be between Thomas and Gerard as Thomas has just bought the Merci Instruments LMM-01 Nationale, and Gerard has just added the Baltic HMS 002 in silver to his collection. But Gerard is on one of his trips to Spain again, so I offered to take his place to defend the Baltic against the Merci. And yes, these two watches are quite similar. Both are great options if you’re looking for a more affordable field watch. But when you look at them a little bit closer, there are still more than enough differences that might make you choose one over the other.

The idea for this battle arose when we saw both watches lying next to each other at the Fratello office. We quickly started to name some of the differences. Not long after, everyone in the office quickly started picking their favorite. And because we couldn’t determine a clear winner, we decided to let you, our dear Fratelli, decide on the matter. But before we do that, let’s take a look at what happened in last week’s showdown. 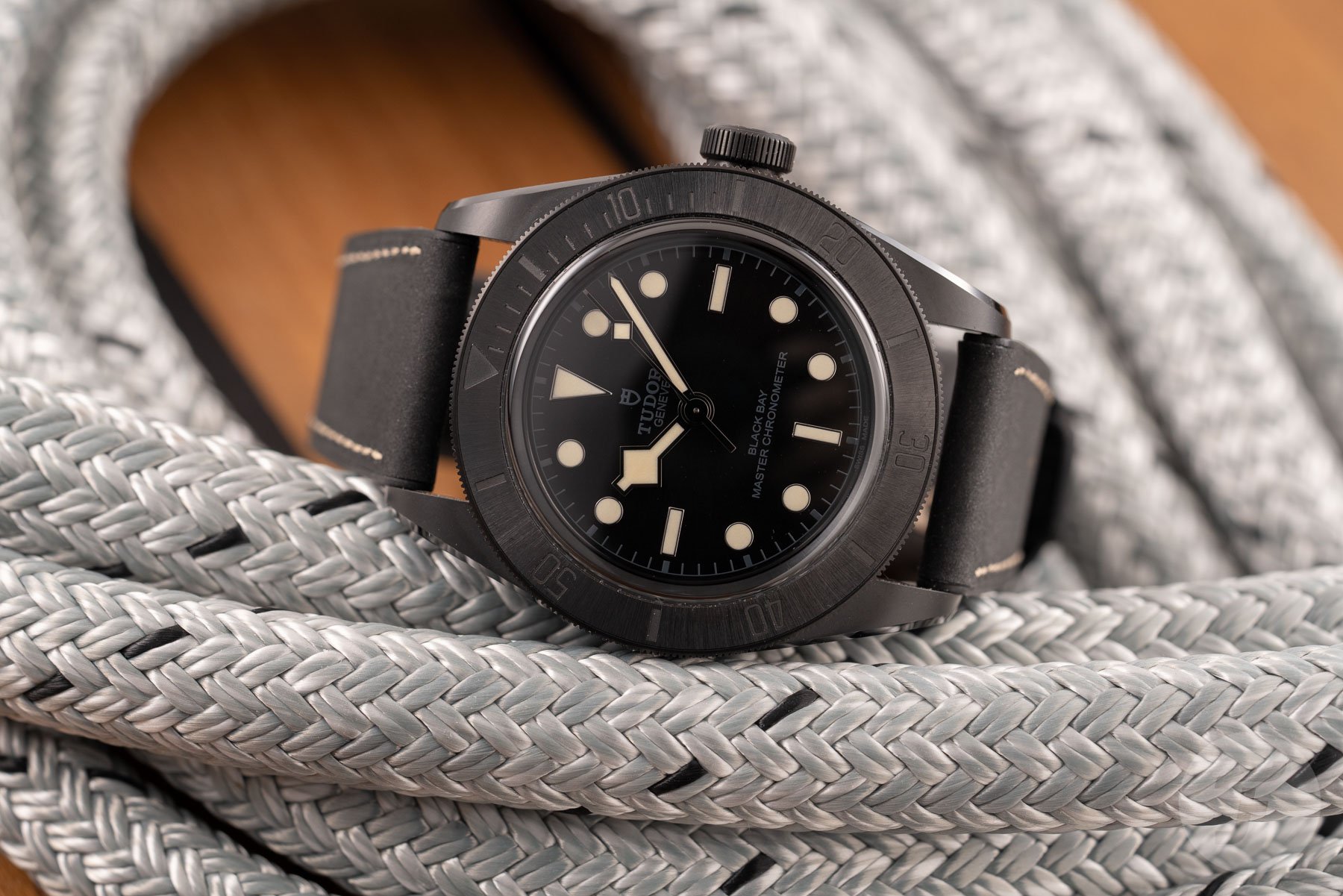 Readability takes the crown in the Sunday Morning Showdown

In that battle, the Omega Seamaster Diver 300M Black Black was up against the Tudor Black Bay Ceramic. Both are blacked-out ceramic watches, and I wouldn’t say it was a landslide, but there was a clear preference for the Black Bay with 57% of the votes against the Seamaster’s 43%. Is it the fact that the Tudor is half the price of the Omega? Well, it might be, but I think the most important difference here is readability. The Seamaster Diver 300M Black Black is simply unreadable in daylight. But if you’d like to get into the nitty gritty and see why the Black Bay won, please take a look at last week’s comments. 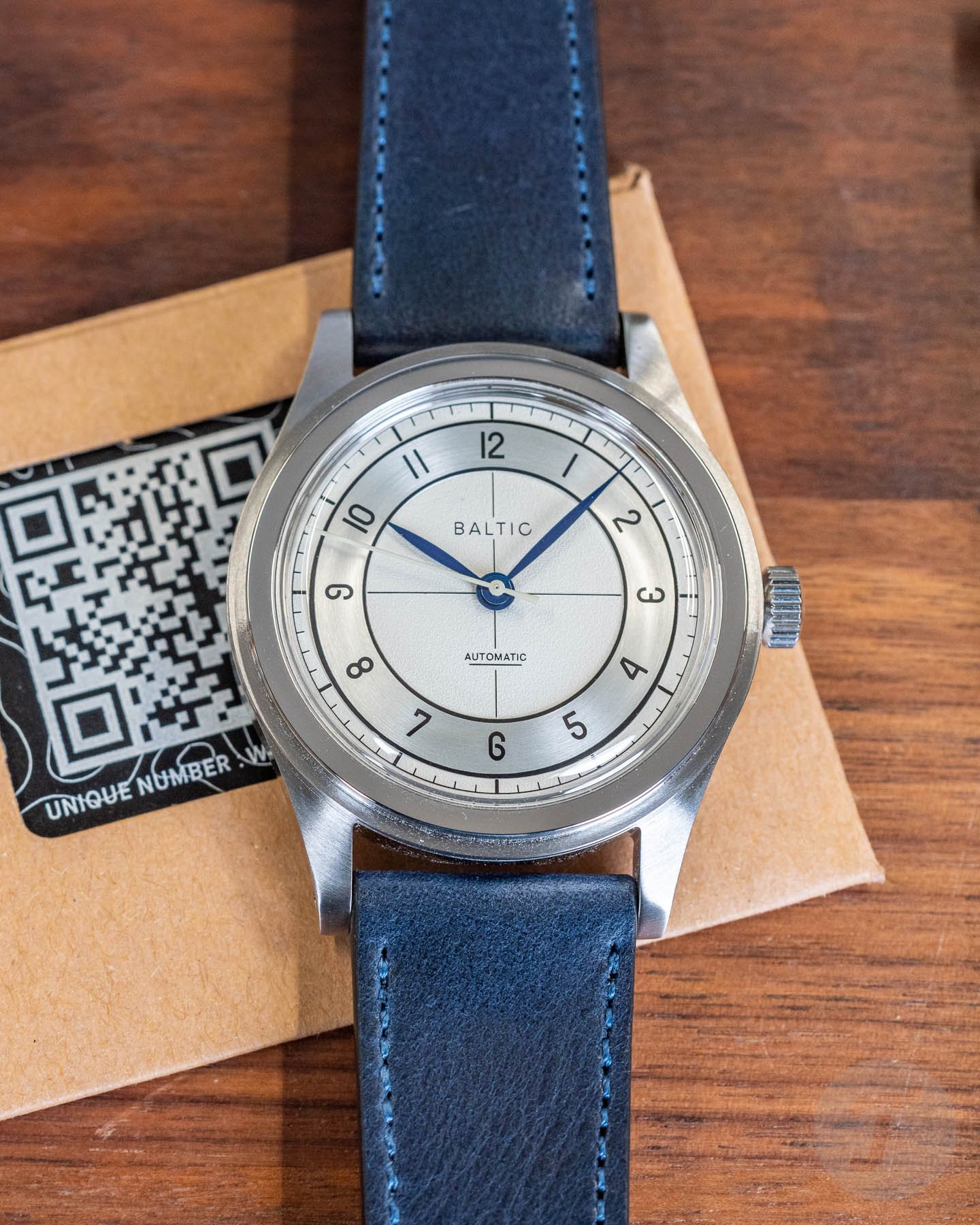 It’s funny because the silver variant is my favorite Baltic HMS 002, but the same also goes for the Nationale, which is definitely the one I’d pick from the three new watches recently launched by Merci Instruments. And though I feel some kind of attraction to both because I like the style, I’d still pick the Baltic. And that’s not just because I’m playing Gerard here. It’s also because I can’t really get my head around some of the design choices that Merci has made. Let’s first look at the similarities here, though. 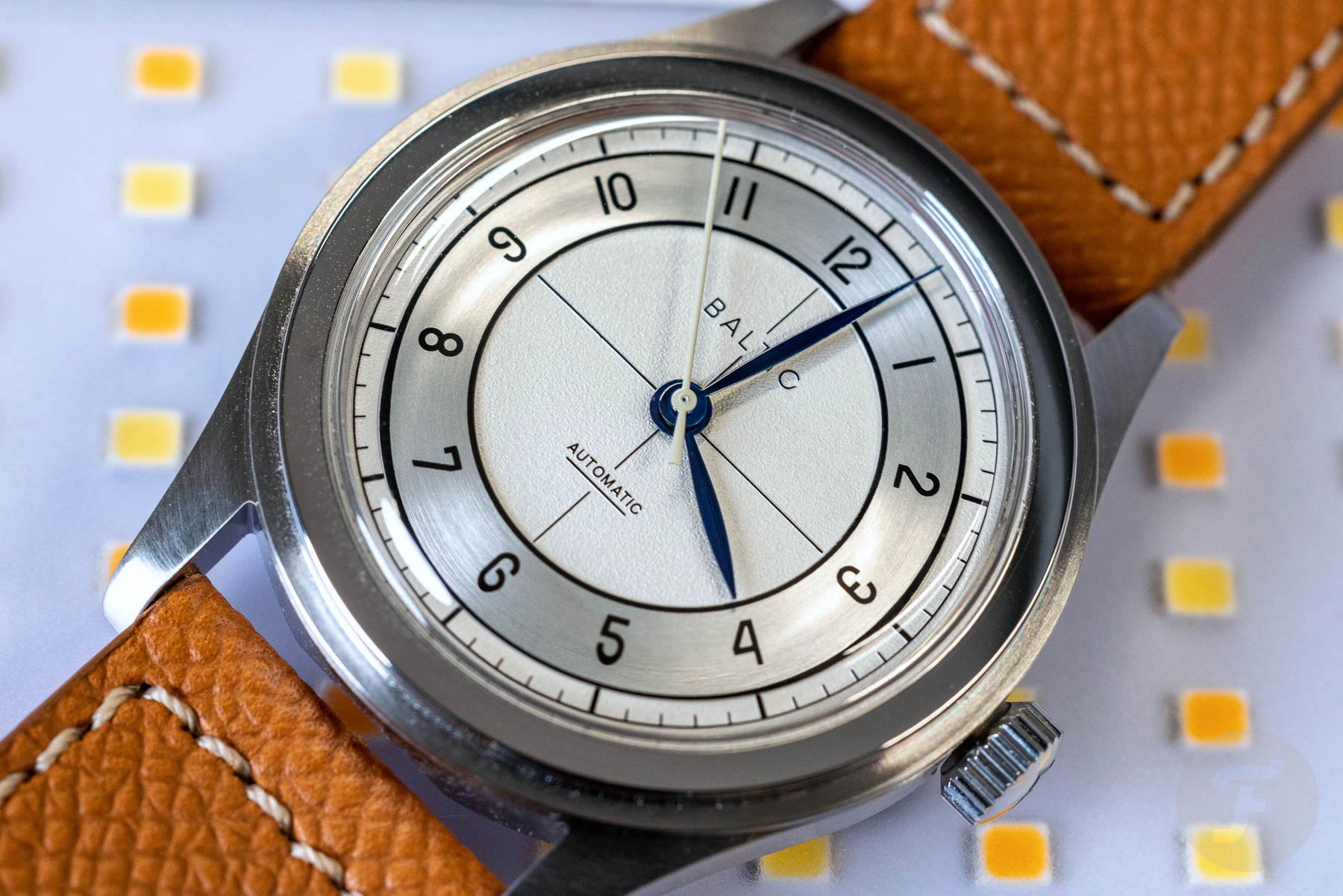 Both watches measure 38mm in diameter and are 12mm thick. The lug-to-lug of the Baltic HMS 002 is only one millimeter longer at 47mm. And here we come to one of the awkward things on the Merci Instruments LMM-1: the lug spacing is 19mm. That’s fine by me, but don’t sell the watch on a 20mm NATO strap, right!? I guess it’s part of the joie de vivre way of thinking. All right, back to the similarities. Obviously, the dial on the Baltic is silver. From what I have seen in person, I think the one on the Merci is silver as well, but for some reason, the brand’s website says it’s white. That must just refer to the minute track, I guess.

Both dials have a sector design, but the one on the Baltic is a lot more pronounced than the one on the Merci. The latter only features the characteristic minute track and the numerals at each quarter. The Baltic goes all-in with a crosshair through the center and numerals at each hour. It also features a radially brushed track behind the numerals à la Breguet. Let’s just say I like it a lot, especially because it still feels very clean even though there’s more going on. I also like the font of the numerals a lot more than the Zurich Extended font on the Merci. 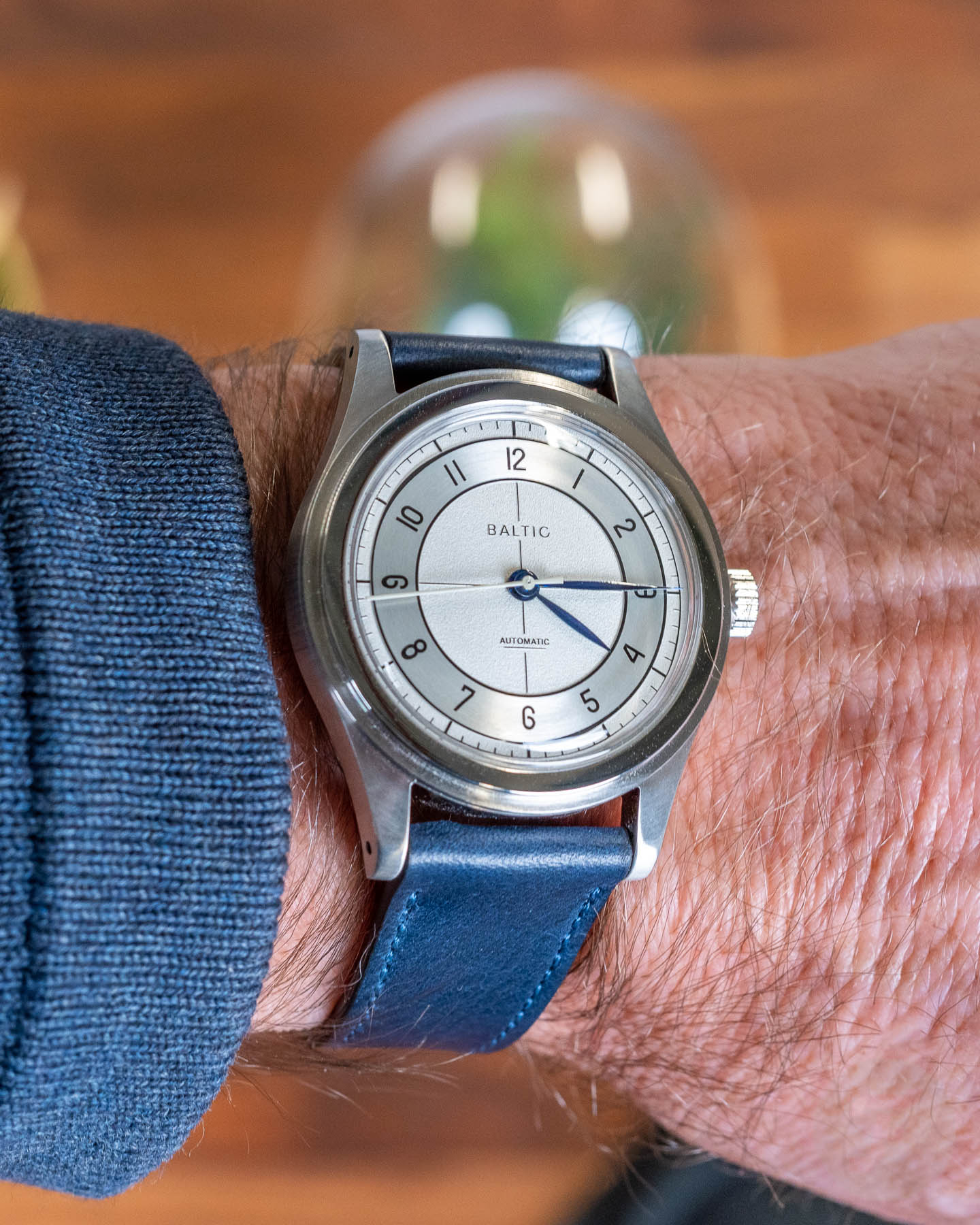 Another big difference is that the LMM-1’s dial says “Fab. Suisse” and the HMS 002 Silver’s only says “automatic.” And yes, it might be cool that the former has a hand-wound Sellita SW210-1 ticking away inside. That’s definitely cooler than the automatic Miyota 8315 inside the Baltic HMS 002, both because it’s Swiss and because it’s a hand-cranker. I’ll give you that one, Thomas. But using a Swiss movement in an affordable watch like this means that you need to cut corners elsewhere. And you can certainly see where that happened for the Merci. 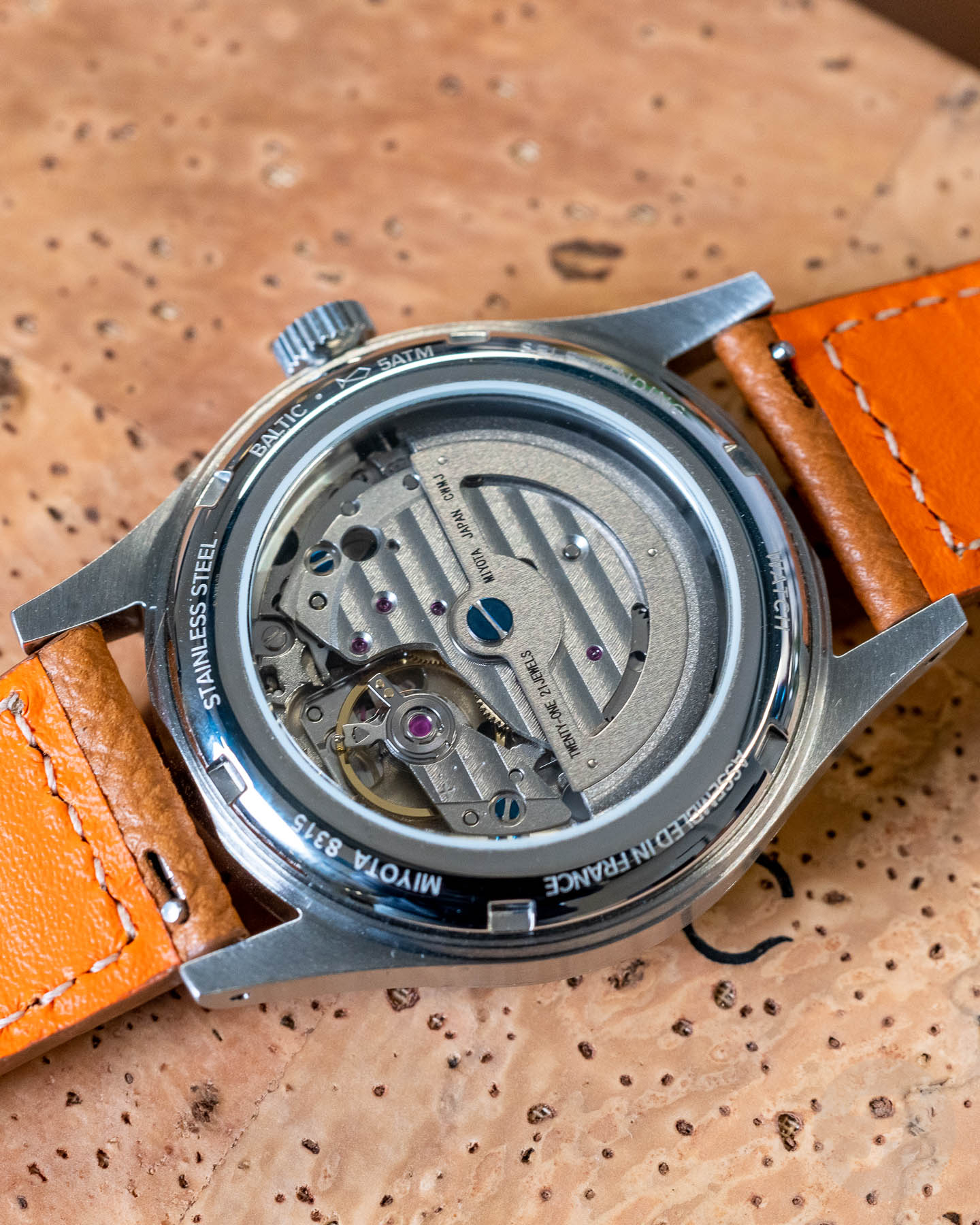 I feel the overall finishing of the Baltic HMS 002 is more refined than that of the Merci Instruments LMM-1. This is not only evident in the brushing on the case but also in the finishing of the hands. The hands on the Merci look like they were powder-coated or something. Of course, the ones on the Baltic are also painted instead of thermally blued, but at least they look more premium than those on the Merci. The LMM-01’s hands just look a bit cheap to me, though I don’t really like the white hand on the HMS 002, to be honest. 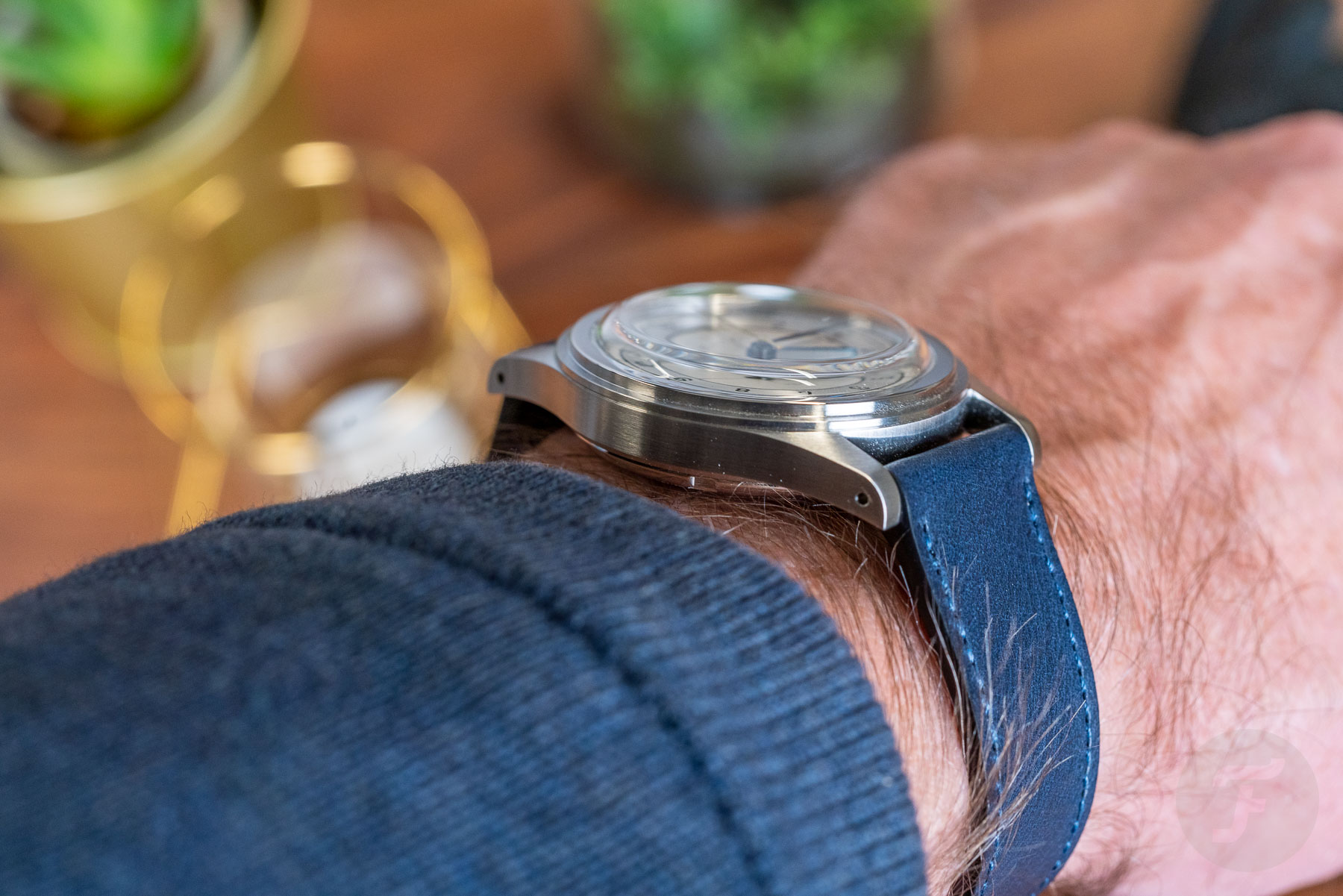 Another characteristic feature of both these watches is the step case. And once again, Baltic offers the more interesting proposition here because there are not just one but two steps on that bezel. There’s one polished bezel on top, and then there’s a brushed one underneath. It enhances the overall design of the HMS 002 and works very well together with the radial brushing on the dial. Oh, and let’s not forget about the mineral crystal on the Merci. It might look like sapphire when you open the box, but as soon as you scratch it, you’re lost. The acrylic crystal on the Baltic might scratch as well, but at least you can polish it yourself if you want.

And that smart choice by Baltic represents what I think of the brand and the HMS 002. Right from the start, Etienne Malec, the founder of Baltic, has tried to make the best watch for the best price possible. If that implies he has to use the less popular Japanese movements — which can, by the way, still be very good movements — so be it. Because let’s talk price here. The Merci retails for €590, and the Baltic comes in at €435.60. I think it’s simply genius how Baltic can offer such a great watch at such an affordable price point. Over to you, Thomas! 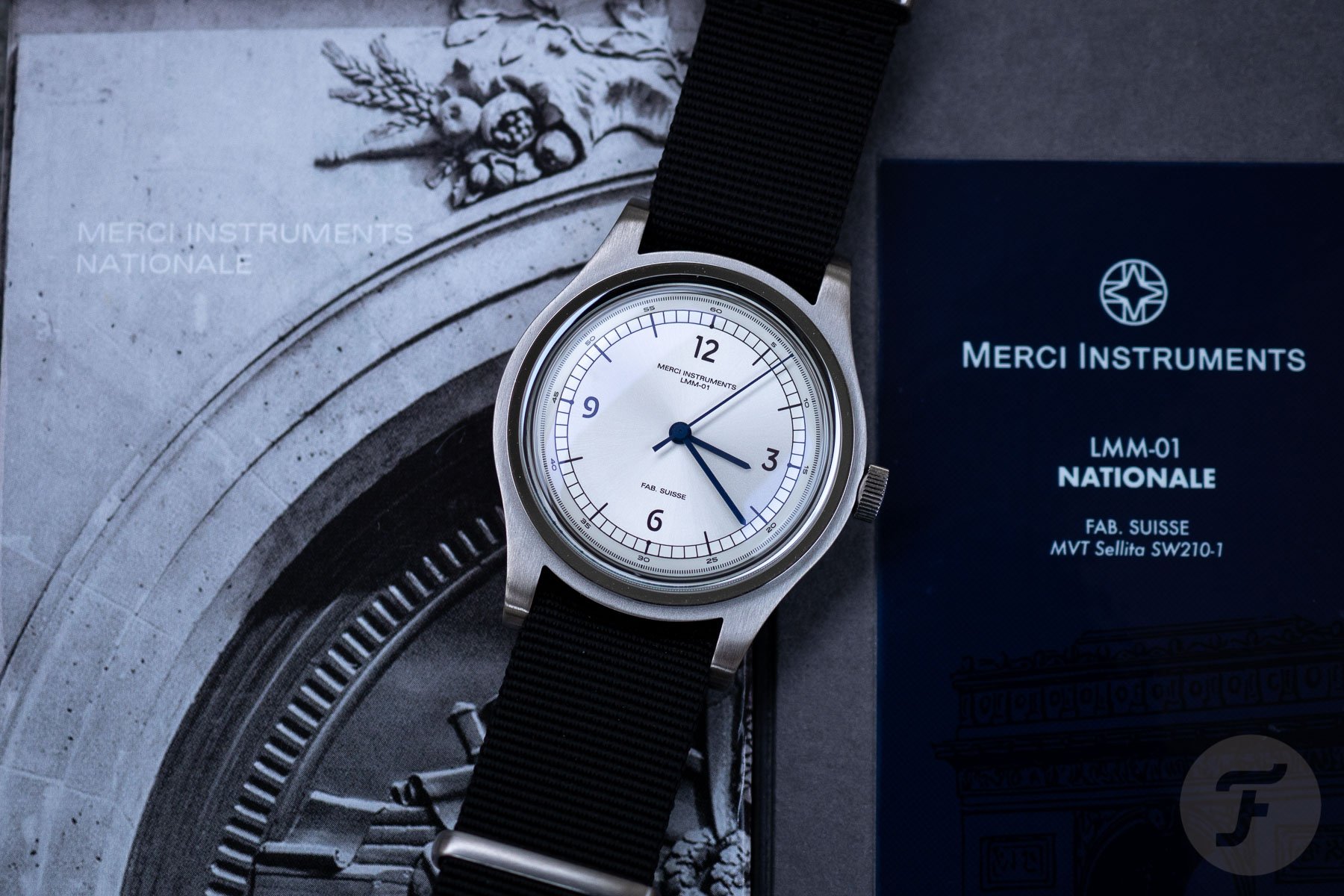 Well, I agree, Daan. I, too, have a weak spot for Baltic, and I have a watch from the brand in my watch box. But in this case, I am very happy with my new Merci. I think it is better by a long shot, and for a familiar reason in our face-offs, Daan. This is the overly intricate Breguet versus the comfortingly clean Lange all over again. Put these side by side, and the Baltic looks over-designed. The Merci is just right.

Let me elaborate. These are simple, to-the-point, vintage-military-inspired watches at heart. So you really do not need another step in the case, another ring on the dial, and numerals all over the place. Oh, and a different color for the seconds hand. Have a look at the black one on the Baltic website. Just the omittance of that ugly white seconds hand is a big improvement. 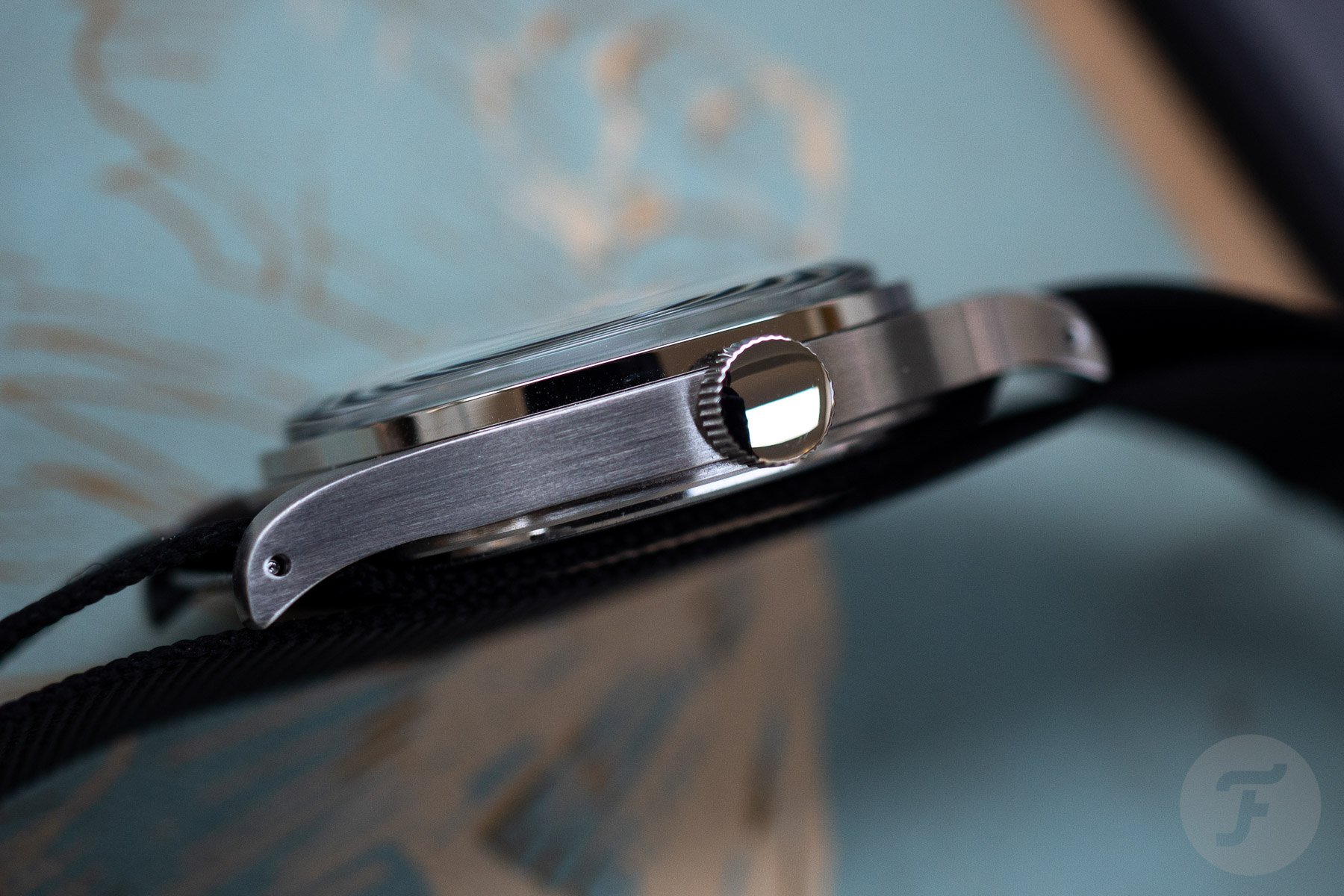 The case of the Merci Instruments LMM-01 is just nicer. It has that long, arching sweep, and I love the ledge that goes all the way around the bezel. It is more distinctly vintage military in feel than the Baltic. There are fewer frills, which is in perfect keeping with the style. 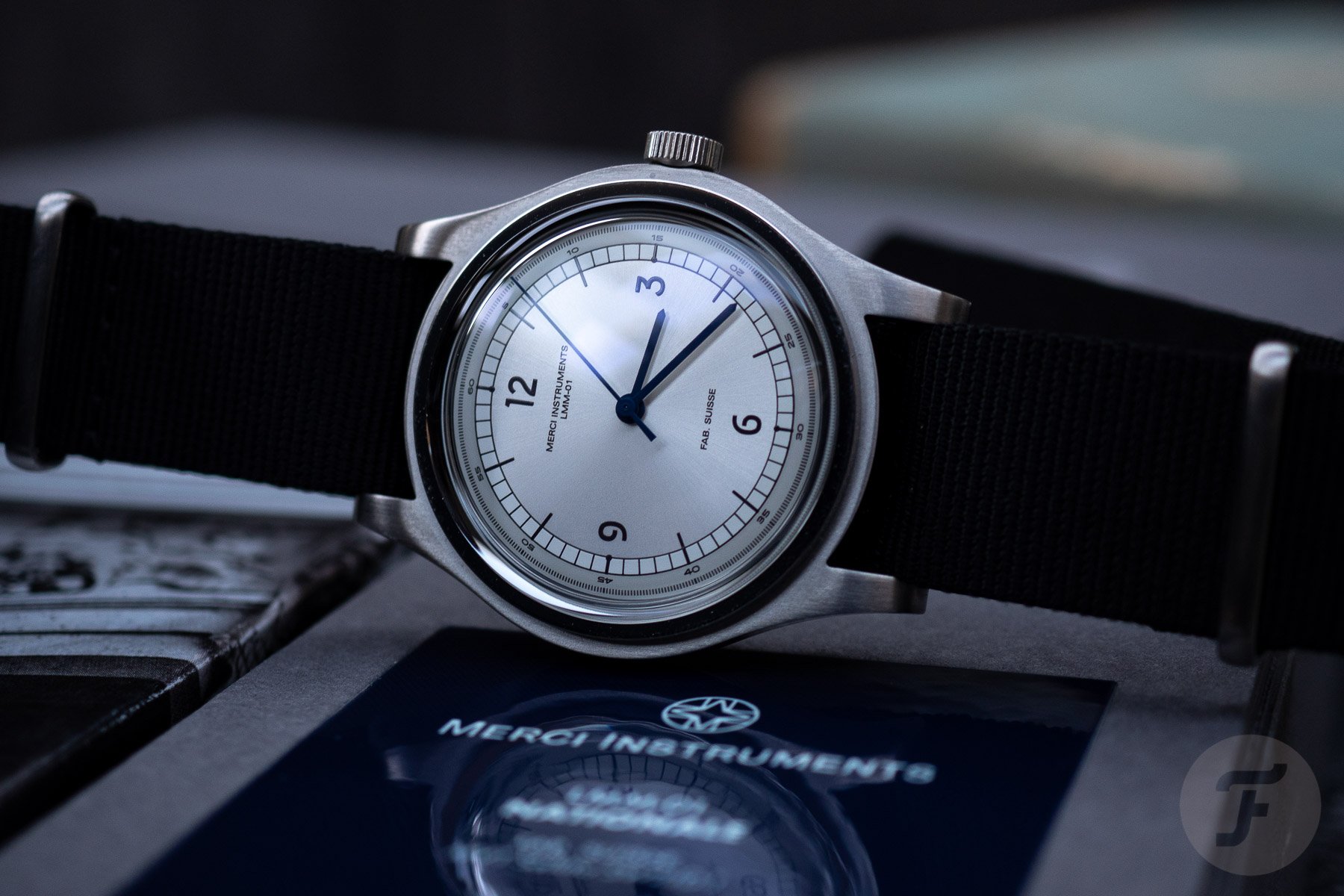 Daan alluded to the better movement in the Merci and then craftily switched topics. But we are not done yet, my friend. Indeed, the Merci’s movement is Swiss whereas the Baltic features a Japanese movement. That in itself does not tell you much. The fact that the Merci is hand-wound, however, is the killer blow in this showdown if you ask me.

This style of watch is just better with a hand-wound caliber. It is more historically accurate, and it fits the simplicity and old-school theme so much better. Daan was very right in arguing that corners have been cut elsewhere. But the Baltic cuts one that I have a bigger issue with: its caliber has a ghost position for the date. That would keep me from buying one. To me, it makes any watch feel like it is botched together and the result of a compromise. 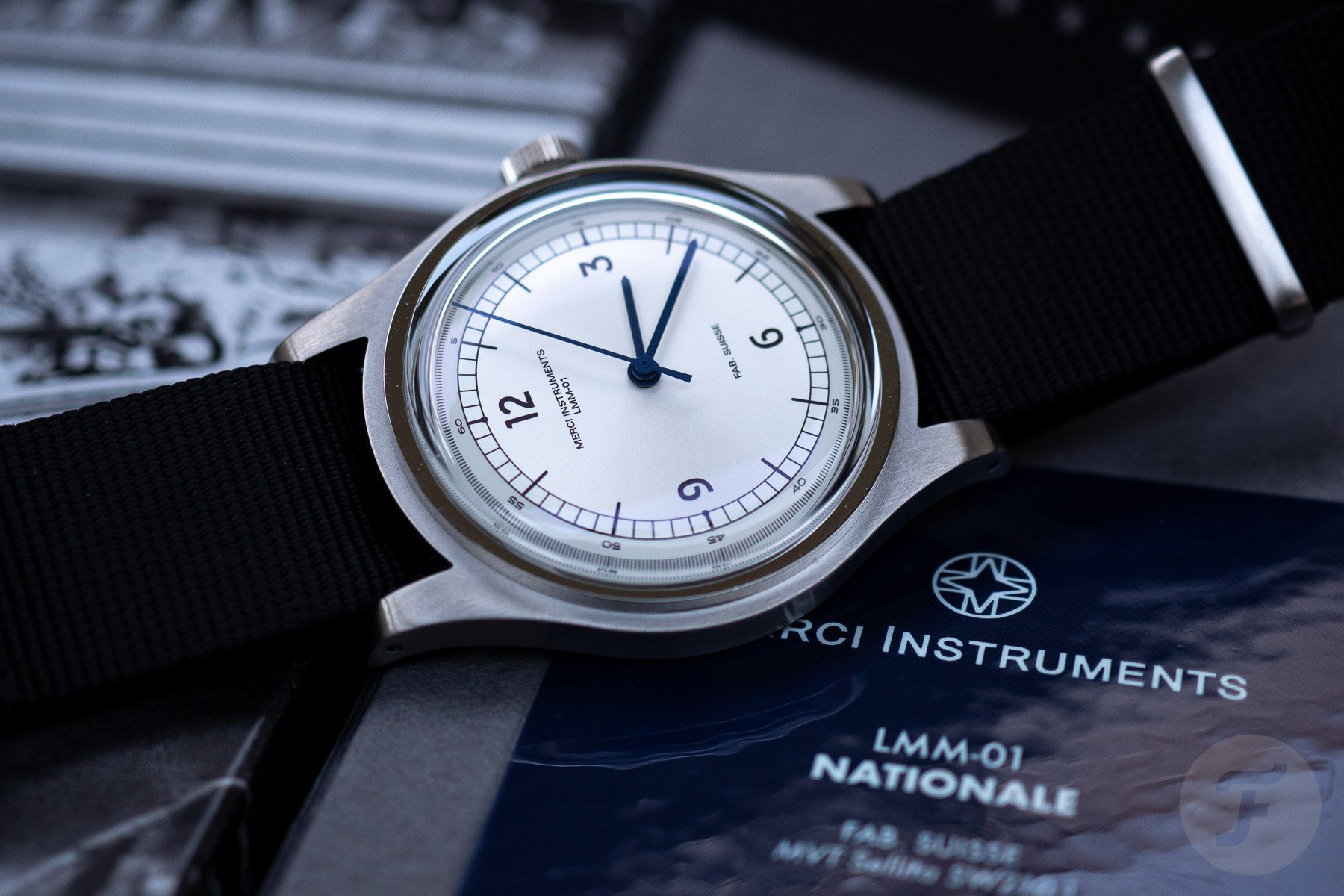 Okay, enough with throwing dirt. Let me explain why I ordered a Merci Instruments LMM-01 Nationale for myself. Nacho had the three Merci watches in for review, and I got a chance to wear one for a few days. It was an eye-opener for me. I did not have any watches in this style in collection. I always glanced over the genre as a little dull and uninteresting, but I was wrong.

Once on the wrist, I loved this thing. It is much more casual than I expected thanks to its vintage military influences. I always felt they were in the no man’s land between sports and dress watches. In a sense, they are. But this is in a way that is much more versatile and attractive than I had thought.

It even got me looking at higher-end alternatives. Daan is right; the finishing is not great, and a mineral crystal is objectively worse than acrylic or sapphire. So if I continue to enjoy this one as much as I have, I might look to upgrade, maybe even to a 1940s original from Omega, Longines, or IWC. In short, then, it is safe to say this watch opened new windows for me. Part of that is down to the magical fit. It feels like an oversized vintage watch that hugs the wrist very well. The Baltic’s belly and straighter lugs make it sit taller. It’s funny how the same height can present itself so differently.

Which do you think is better?

This Sunday Morning Showdown sees two very similar French watches go head to head. It will be interesting to see which you, our dear Fratelli, prefer. Both are young brands with vintage vibes. Both operate in the entry-level price range, and they make different compromises to do so. Which compromises weigh more heavily, and which design speaks to you more? After all, these are design-first watches.

Cast your vote and tell us why in the comments below.