BREAKING NEWS: The Swatch MoonSwatch Summer Tour Is Coming To A City Near You!

Picture this: a dewy early-summer morning in Biel, Switzerland. The impressive glass gates of the Swatch headquarters open, and a set of headlights approaches from the darkness inside. That set of headlights is followed by ten more. As they emerge one by one, you see eleven cars, painted in the colors of each of the eleven MoonSwatches, with blue suitcases on the luggage rack branded with the Omega × Swatch logo. As they hit the road, each “rolling planet” heads in a different direction, each bound for its own European destination. The Omega × Swatch MoonSwatch European tour is officially underway, and it’s coming to a town near you.

We all know the feeling — summer is here, and all you want to do is pack light, get in your car, and hit the road. With your best friends and good music, the kilometers melt away and the road-tripping begins. Well, Swatch has embraced this summertime tradition and set out to conquer Europe with colorful Bioceramic watches and equally colorful vehicles. Its eleven-car battalion will be touring the continent and making all the must-see stops. The most exciting part? Each of these “planets” will serve as a purchase point for the elusive Speedmaster MoonSwatch! So, keep your eyes peeled and on the road, as one of the MoonSwatch-mobiles might be on its way to you even now. 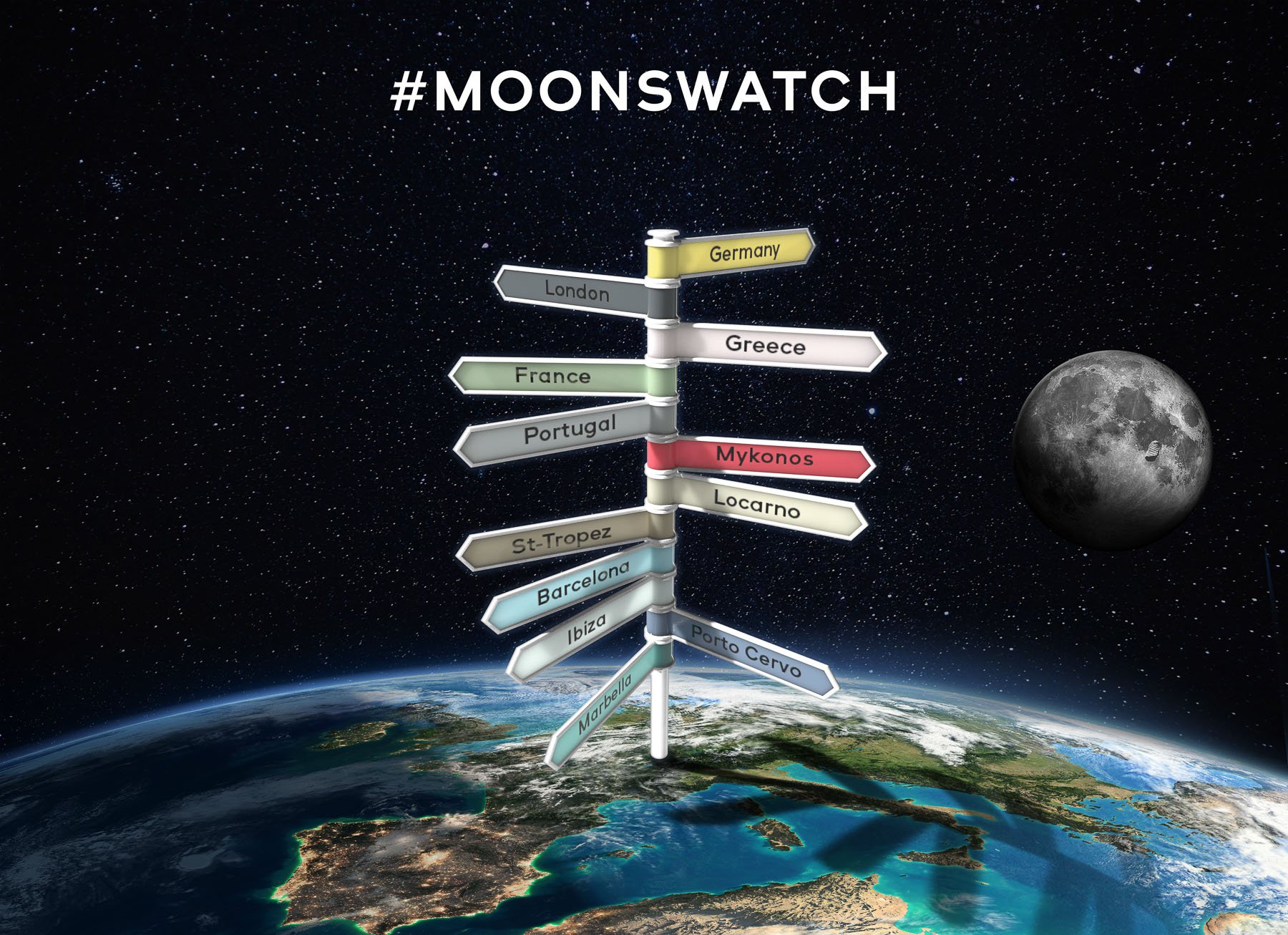 Kicking off today in Biel, Swatch announced the MoonSwatch Summer tour just this morning. Is it a response to those who have voiced their concerns about the lack of availability? Is it a move to bring the MoonSwatch to those who do not live near a boutique? Or is it a way to keep the viral hit going over the summer? So far, all we can do is guess, but whatever the purpose, one thing is clear: the planets are on their way! Where to, exactly? That’s also a good question to which we can only speculate. The image above seems to provide a clue as to where they’ll be heading. However, we are pretty sure that (though not pictured on the signpost above) they will be coming to the Netherlands too. Fingers crossed!

EDIT: We can now confirm that one of the planets will indeed make its way to the Netherlands, kicking off its tour in Amsterdam on Thursday, the 14th of July!

Whether you spot Mercury in London, Mars on Mykonos, or Uranus in Barcelona, we cannot say. However, do stay tuned to both Swatch and Fratello on Instagram for updates on the tour, location, and what exactly is going on. As always, we’ll do our best to keep you posted on the latest news. Hopefully, you’ll have a chance to catch one of the eleven rolling planets when it’s in a city near you and order your favorite MoonSwatch from the lovely Swatch staff piloting them all around Europe. 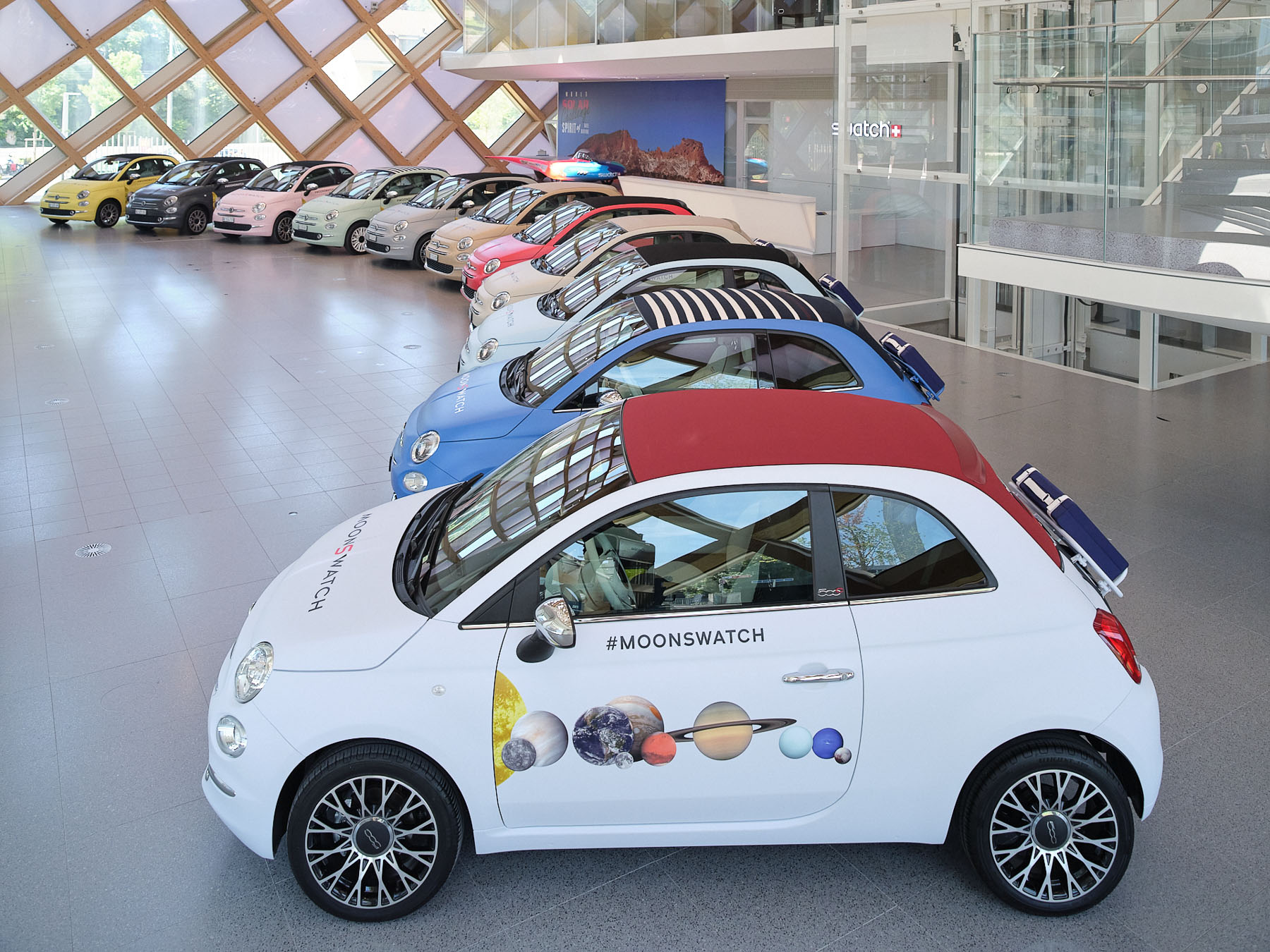 For now, that’s all we know! I’d love to hear your thoughts on the Swatch MoonSwatch Summer Tour in the comments below. Will you be chasing one of these hybrid convertible celestial bodies for a chance to get your hands on a MoonSwatch?

You know we’ll be out there hunting them down. And as soon as we have more information, you’ll be the first to know. For now, make sure to follow along on Instagram for the latest.