At Baselworld 2015, TAG Heuer issued an interesting chronograph in the Carrera Telemeter. Following on the footsteps of this piece, the brand has decided to go retro once again in order to celebrate the 40th anniversary of one of its other racing-inspired chronographs. Our team met with the marque at this year’s show to take a look at the attractive TAG Heuer Monza. 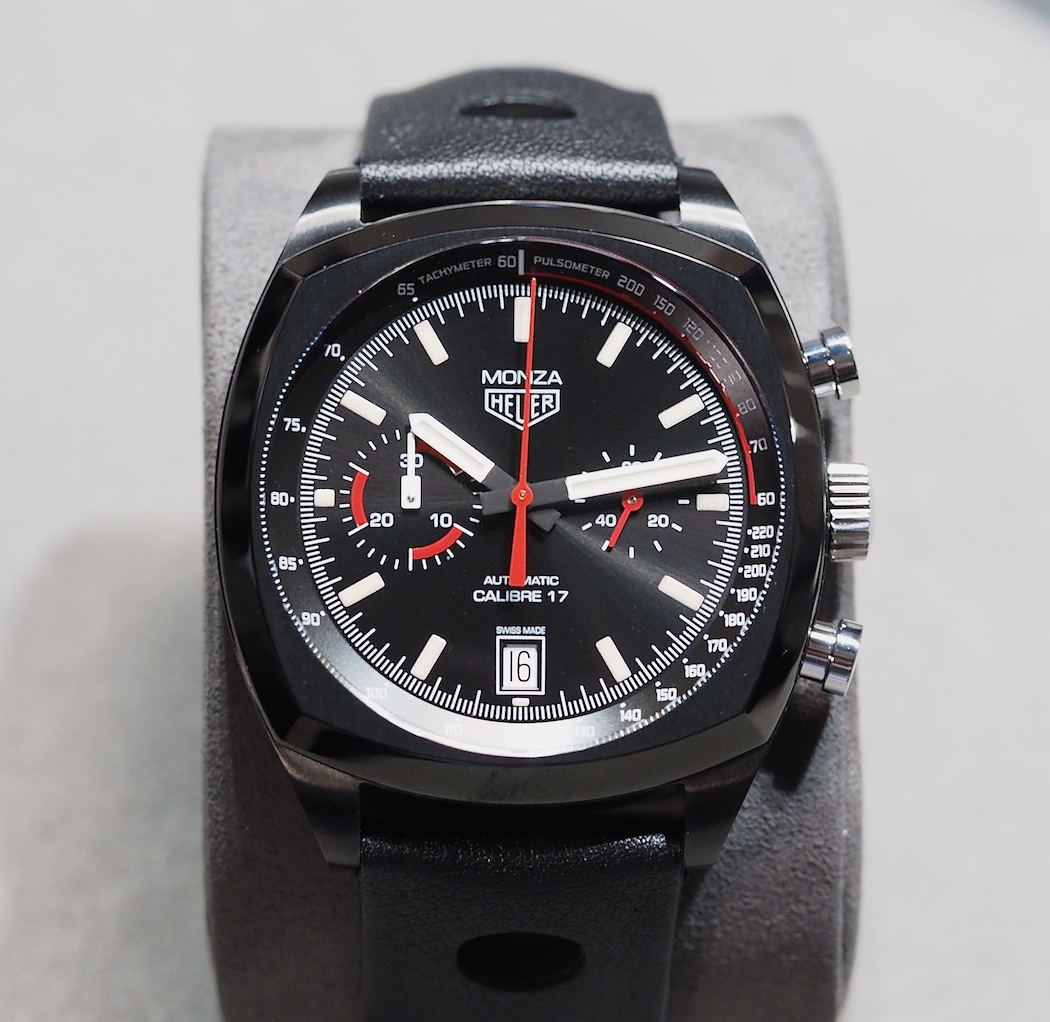 Head on with the new TAG Heuer Monza

Retro is back with the TAG Heuer Monza

With the recent introduction of the Autavia Cup (don’t forget to vote!!!), where online users can vote in a knockout-style contest to determine the theme of an Autavia reissue, it seems that TAG has really started to grasp the importance of their history. I only say this because, over the years, they’ve swayed back and forth on futuristic or retro (I like a healthy balance). With this year’s release, the TAG Heuer Monza, the company focuses on one of the brand’s more quiet pieces. It’s an interesting release, but I suppose it makes sense due to the model’s anniversary. Also, the fact that Monza was done in black originally fits in well with the recurring theme of coated watches we noticed at the big show. 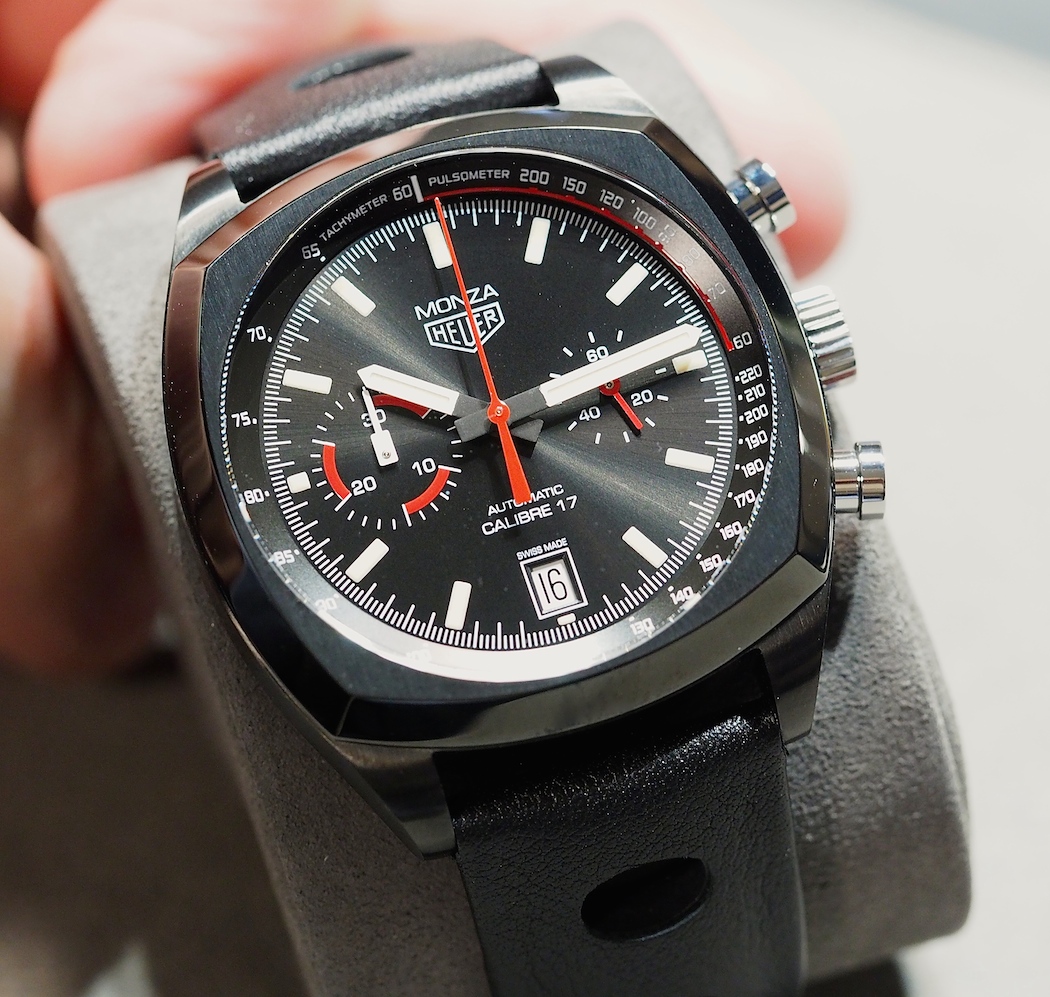 The TAG Heuer Monza blends the old and new

Yes, the TAG Heuer Monza is back after a return in the late 1990’s and early 2000’s in stainless form. The cues are a blend of what we saw in the late 90’s with a rounded square case – all sides look equal in length – and the original 70’s models in color palette.  (Head to OnTheDash for a nice overview of the early models.) The colors are sharp indeed with a PVD-coated titanium case (42mm) and a sunburst dial done in black, white and red. It also features a pulsometer/tachymeter like the original. The watch brings in a really attractive “big-hole” rally strap that’s buttery in texture and really does look the vintage part.  The deployant clasp is also PVD-coated titanium and features a 2-button clasp with a huge vintage Heuer logo. 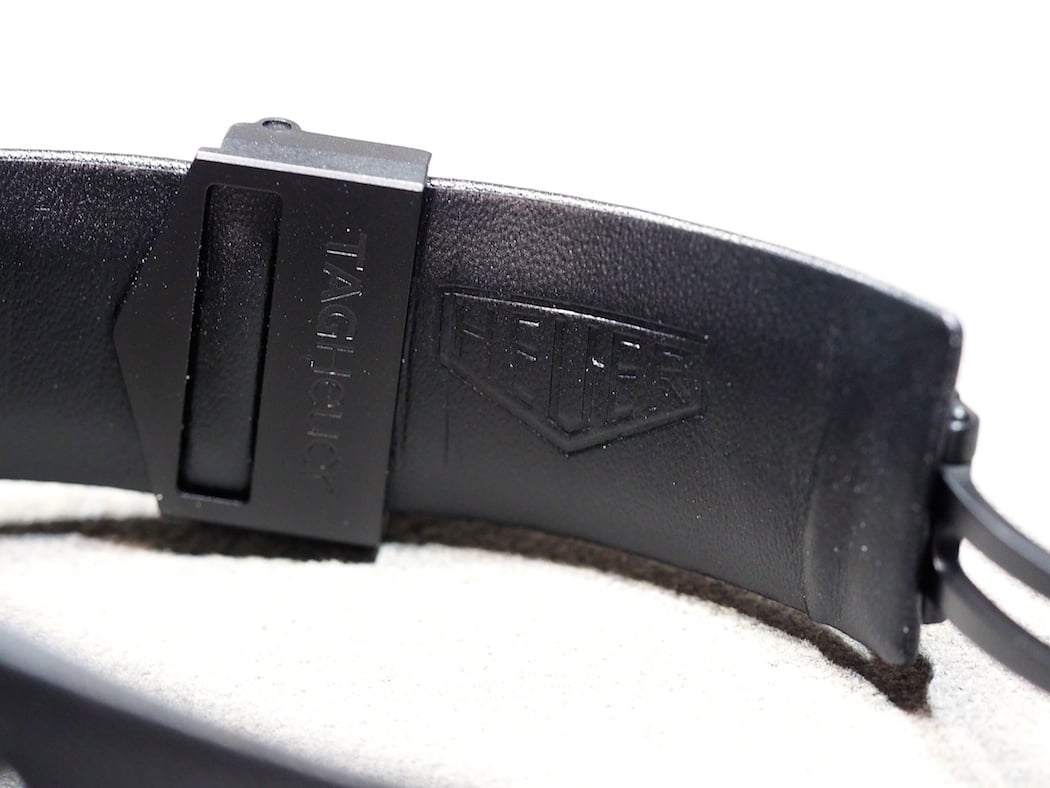 Inside the TAG Heuer Monza, the Calibre 17 does business. It’s the ETA 2894-2, which is an automatic, modular chronograph. It features a date and two registers. The rightmost is a running seconds and the leftmost is a 30-minute counter. A quick-change date sits at 6:00. 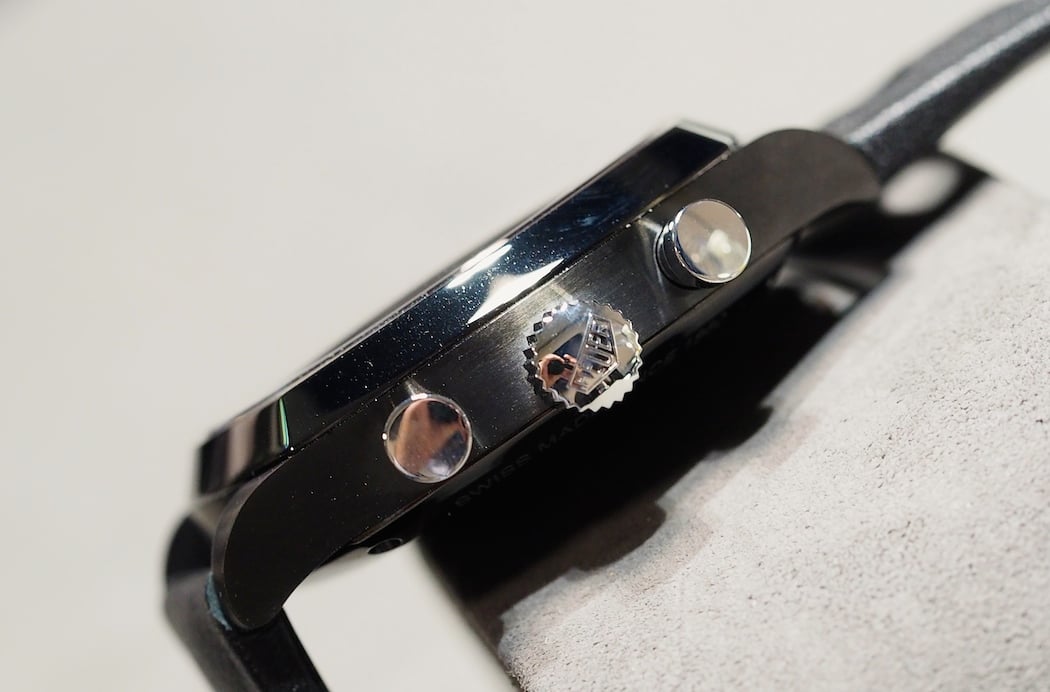 From the side, it’s unfortunately obvious that it’s modular as the bare stainless crown sits lower than the (also uncoated) pushers. It’s not my favorite look and is one we saw on the Fortis Tycoon during last year, but it’s really not visually concerning when on the wrist. As a note, the Carrera from last year used the Calibre 18…a different modular movement. 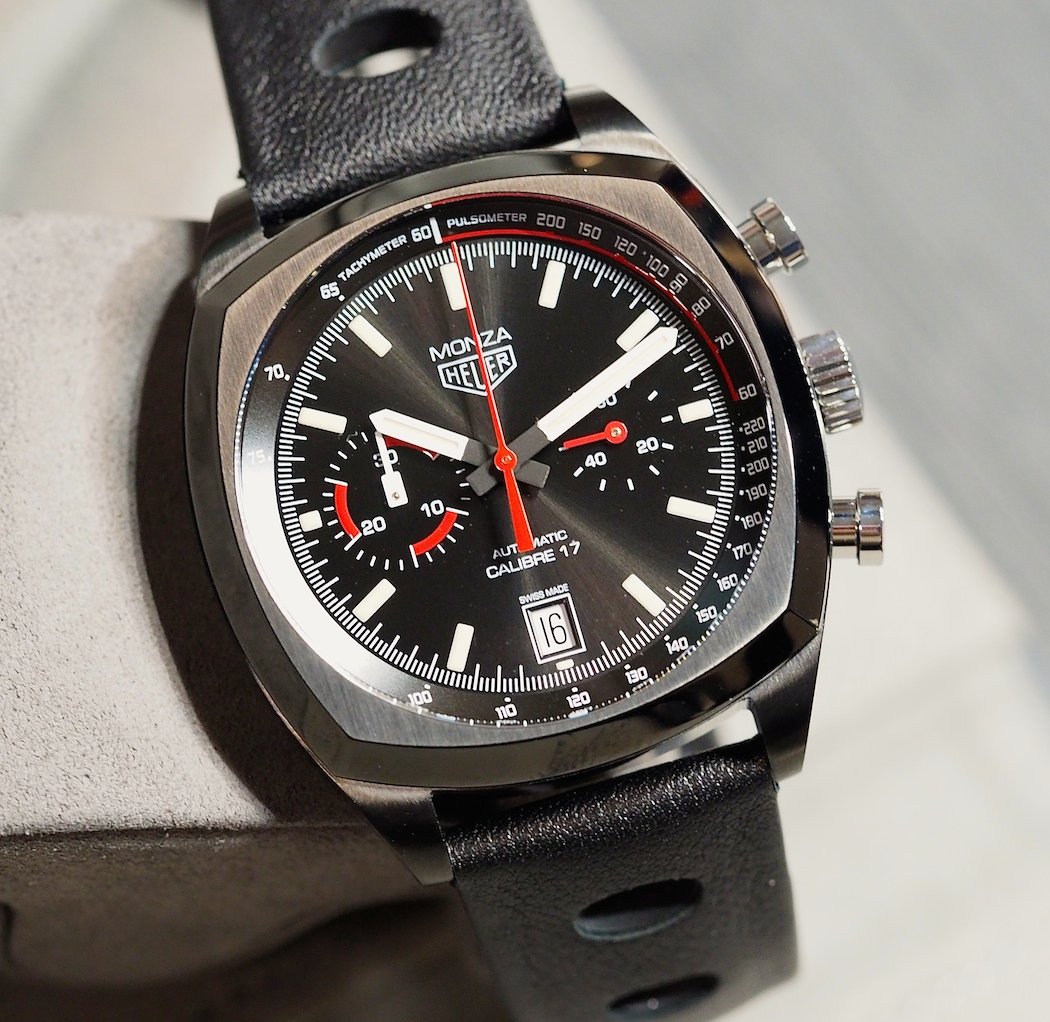 Now that the specs have been detailed, I’ll give my thoughts on the new TAG Heuer Monza. Honestly, I really liked it in person. As mentioned, the contrast is very sharp and I really like the fact that TAG used vintage cues such as the left register hand that harken back to the 70’s pieces. I also like the fact that the case isn’t exactly like the 70’s piece and that the case is in titanium. Sadly, despite the fact that it’s “only” 42mm in diameter, it didn’t really fit me. It was a bit tall and it porpoised a touch on my wrist. Of course, I hadn’t really tightened down the display strap, but my overall feeling is that it wears like a bigger watch. This, incidentally, won’t be a big issue for most buyers. 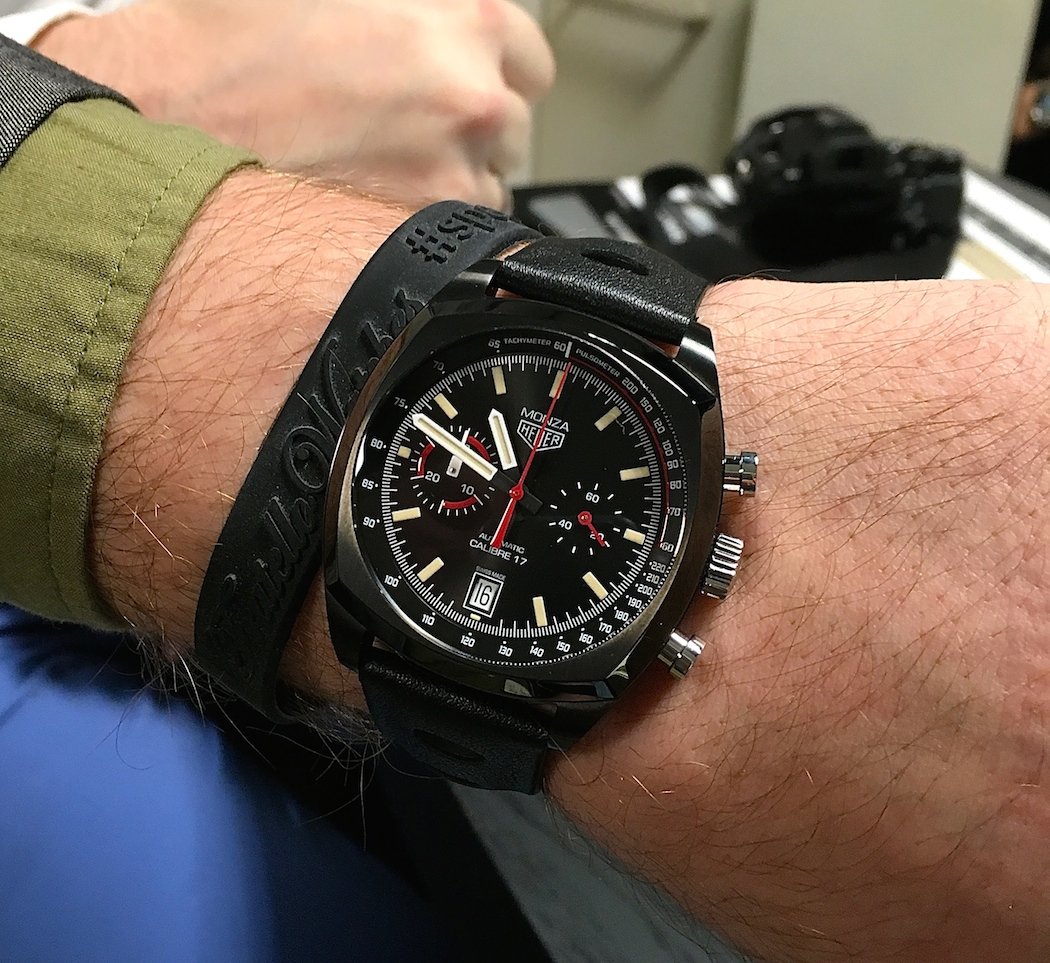 Some other points I really like about the TAG Heuer Monza are the crown and pushers. I like the style of the pump pushers as well as the adequate “Heuer” signed crown. The alternating brushed and polished finishing on the case also looks great and high quality – certainly more luxurious than the chip-prone original models from 40 years ago. Also, note the aged lume on the shot above (the lighting was awful otherwise). Finally, you get the feeling that this is a robust watch with its 100m water-resistance so, again, this isn’t your Dad’s Monza. 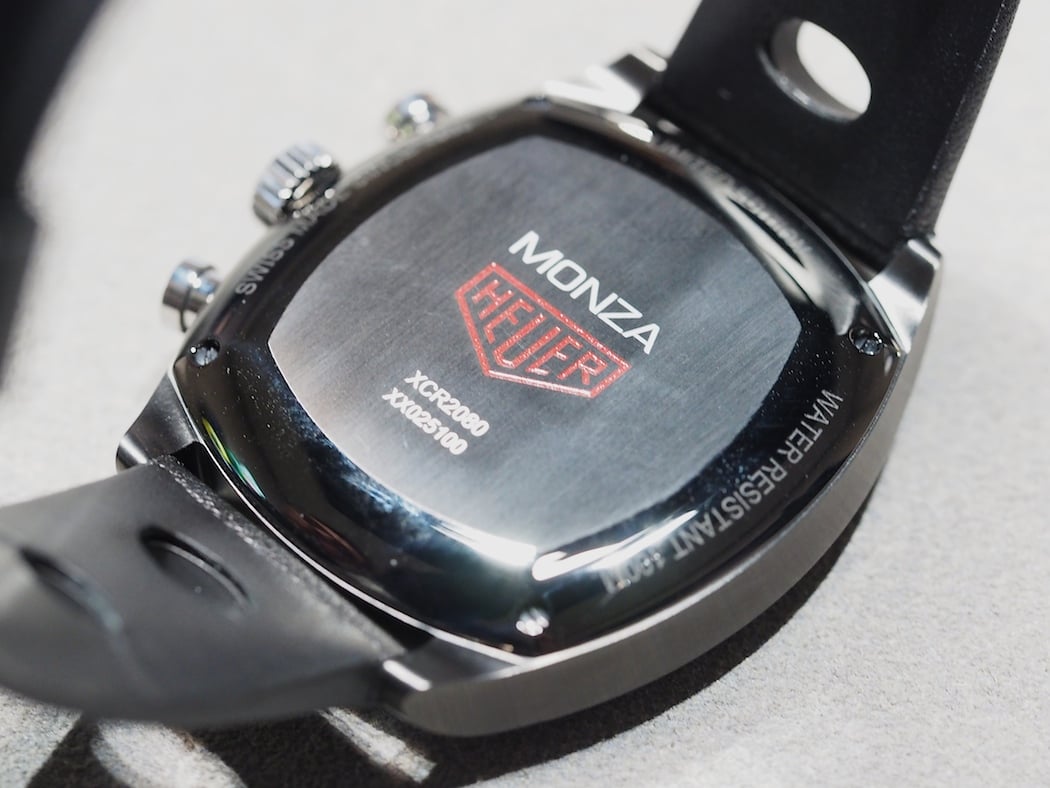 The screw down case back of the TAG Heuer Monza

Last year, you may remember that I gave a fairly heavy sigh at the price of the Carrera Telemeter. Well, what a difference a year makes and that fact that the Euro “ain’t what it used to be” because the nearly identical list price of 4950 Euros sounds a heck of a little sweeter (in US Dollar translation) in 2016 versus 2015. In today’s world, it’s certainly inexpensive, but it’s a nicely done retro model with enough modernity to make it fresh. The TAG Heuer Monza will be a limited edition but not numbered, so let’s see how tough it is to source.

More information on the TAG Heuer Monza can be found on the official website.