Some specially branded Heuer Carrera 2447NST watches were presented to the Volvo Board of Directors. An Alfa Romeo Rodania has a surprisingly sharp integration of the brand logo into the dial. And don’t ask me who made the gold-plated quartz Ford watches, but I need one.

Watch collectors often have another affection — classic cars. It’s no secret that we have a few petrolheads on the Fratello team too, and I am one of them. I don’t even own a modern car, and unless I really have to drive my wife’s soulless SUV that I have zero connection to, I always prefer to grip the thin wheel of one of my old cars. Oh, and I do not need to highlight how satisfying it is to drive a classic car while wearing a vintage chronograph. 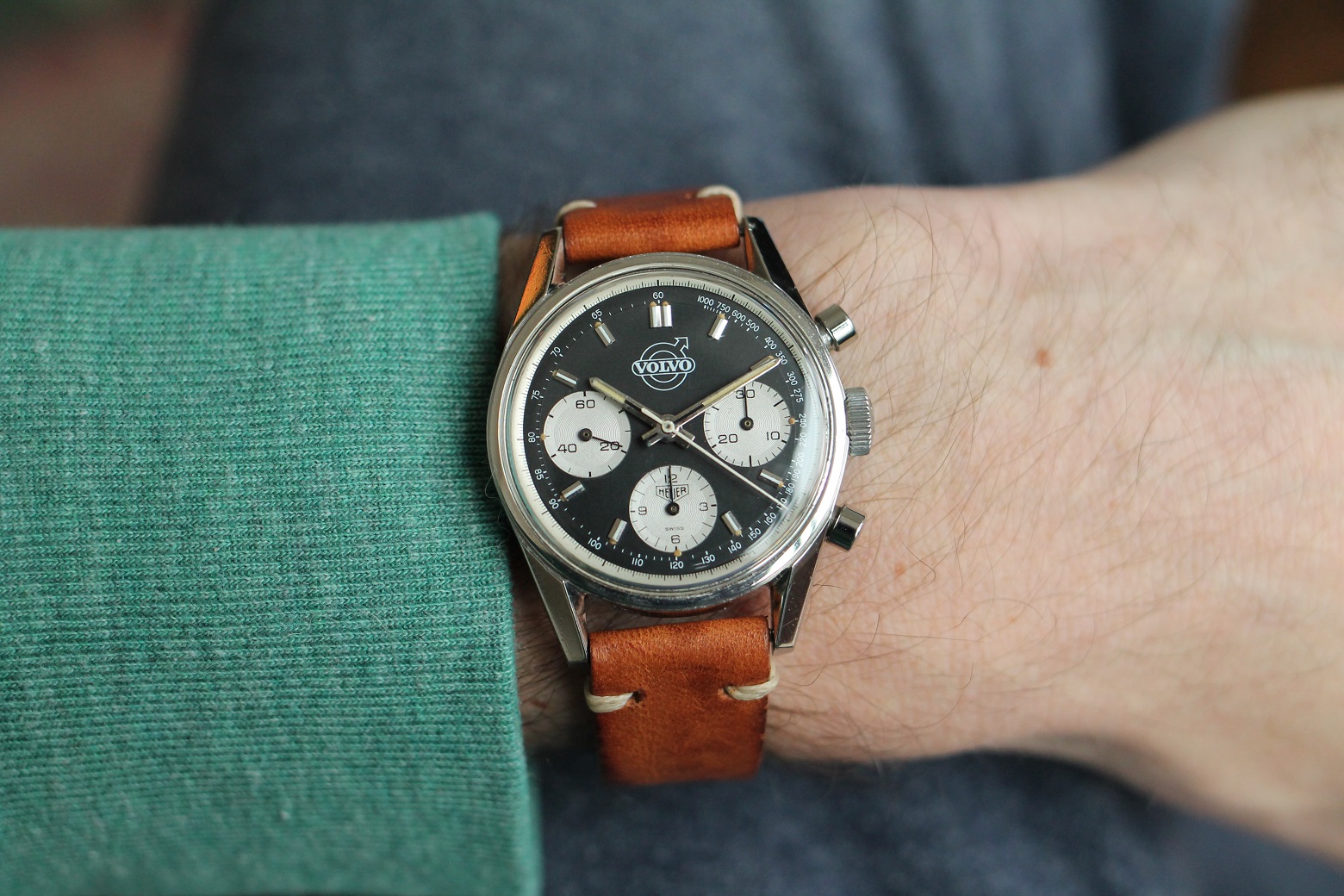 Watches and cars have been tight for decades, and it’s not only famous racers that bond them together. Racers often picked standard factory-spec watches based on their preferences with no customization at all. They just liked them and found them to be reliable tools. Sometimes, though, cars and watch manufacturers got even closer, and car logos found their way directly onto watch dials. One of these watches is a sought-after Heuer Carrera 2447NST with unusual Volvo branding. But Volvo? Really? 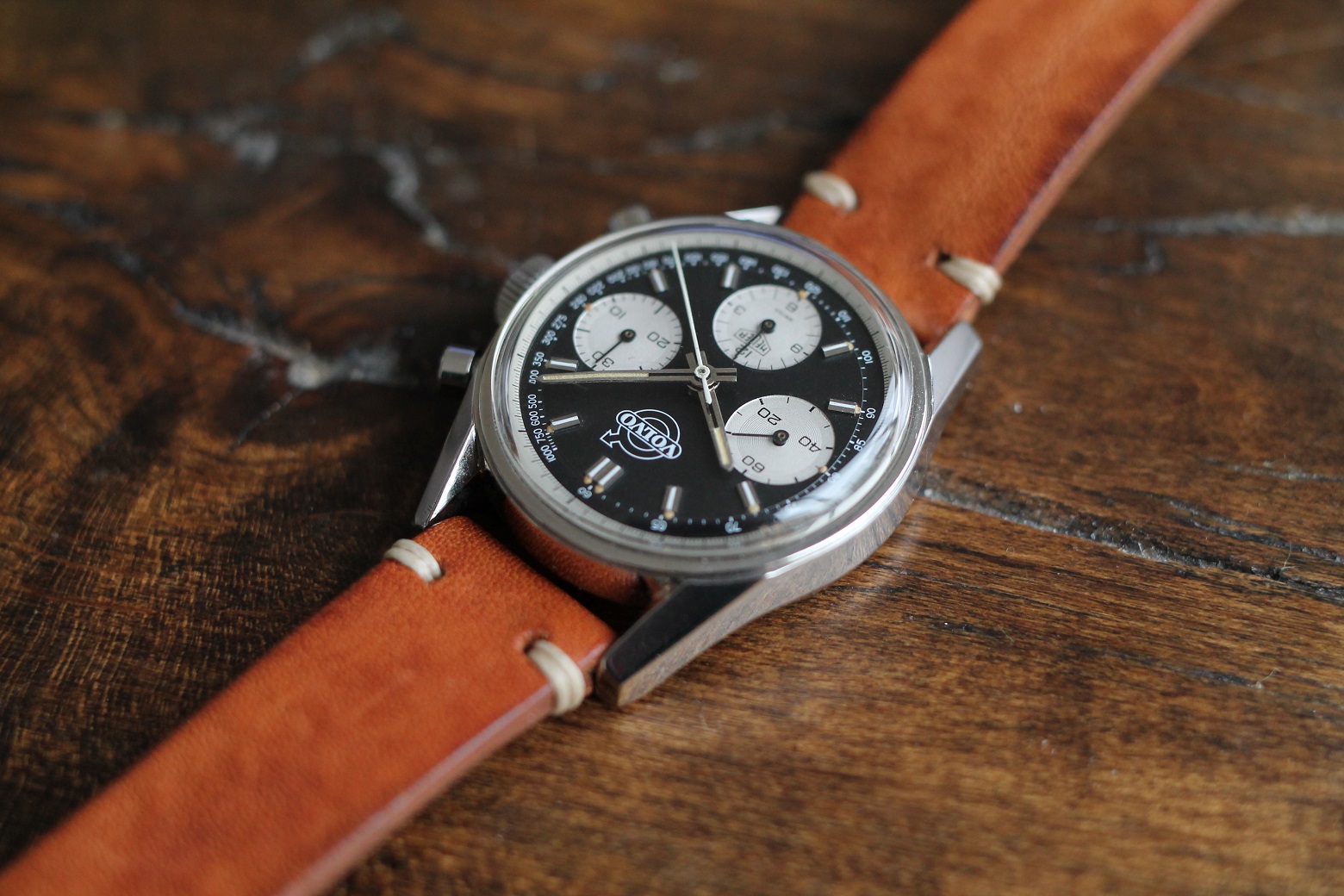 This black-dialed Heuer Carrera 2447NST with contrasting 1/5th-of-a-second ring and tachymeter scale is powered by a reliable Valjoux 72. The 12-hour counter at the bottom makes it so attractive to me as I greatly prefer it over a vintage Carrera without one. This model, in particular, is even more unusual. The iconic Heuer logo doesn’t sit in its typical premium position but instead moves into the previously mentioned hour register. Very interesting placement indeed.

The reason for that is pretty simple. The premium spot under 12 o’clock went to the generous Volvo branding. And to my greatest surprise, it’s not that bad at all. It is quite big, but it’s probably the circular base that provides quite a gentle visual integration.

One thought on placement

It is not usual for a watch brand to “bend its knee.” Maybe you remember my Eberhard Fiat, another watch with car branding that I featured on #TBT. As with my Eberhard, the watch brand’s logo usually kept its premium position, and the car manufacturer’s logo was just added “somewhere” on the dial. From the production perspective, it was easier because they could just print the second branding on an existing dial. 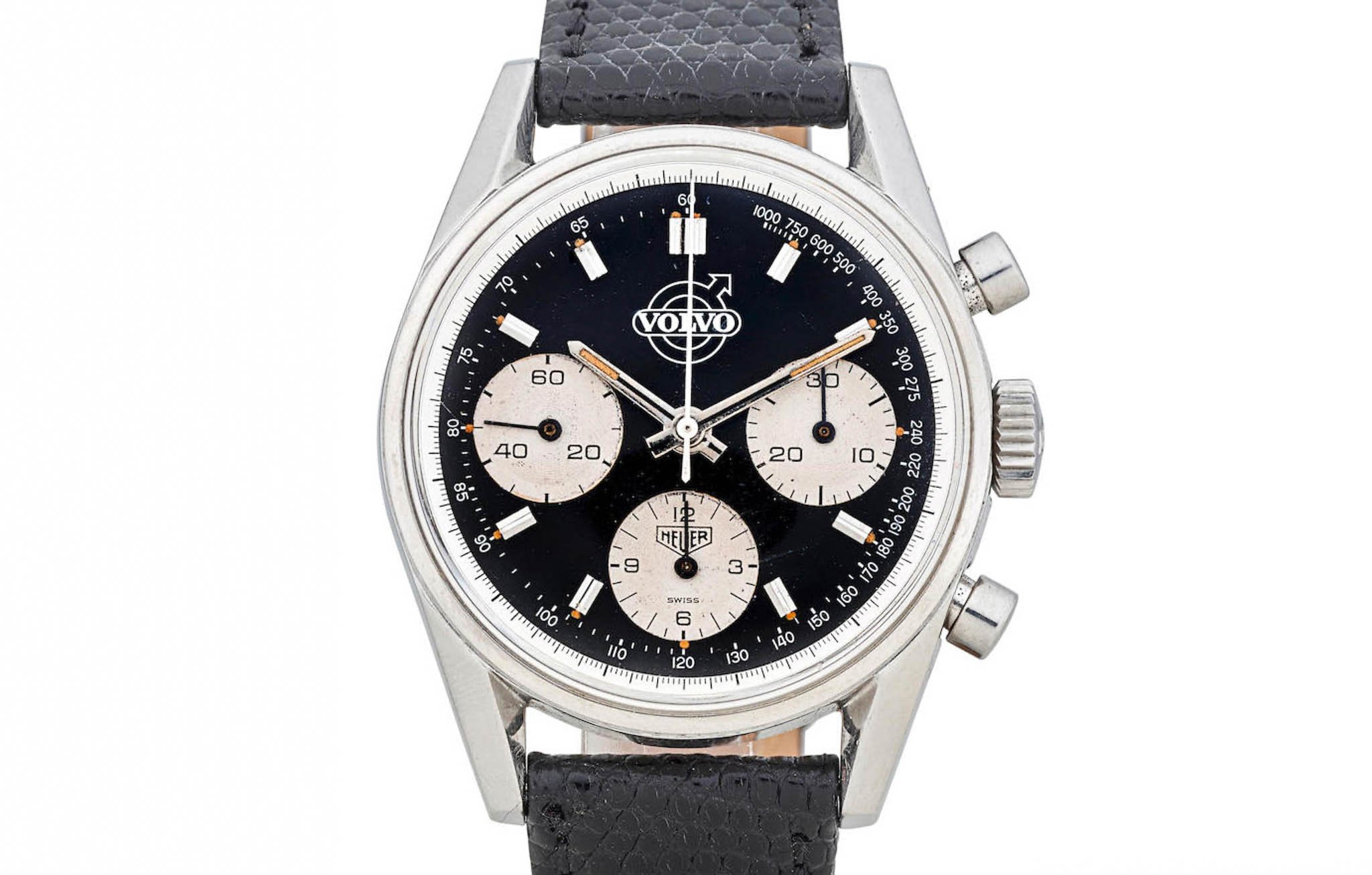 If you expected some racing story, I have to disappoint you. There are no famous racers or races tied to this watch. But the story is no less interesting. According to Bonhams, this particular watch was a Christmas gift to the owner from Bob Sinclair, the head of advertising of Volvo USA, based in Rockleigh, New Jersey, in the late ’60s or early ’70s. The owner’s mother was his administrator, and he had been a summer hire in 1969 and 1970.

According to Wikipedia, Sinclair “served as Chief executive officer of Saab-Scania of America from May 1979 until September 1991, where he helped improve the popularity of Saab’s cars by convincing the parent company to manufacture cars with high-end options such as turbochargers and a convertible version of its Saab 900 that was designed to appeal to American consumers.” 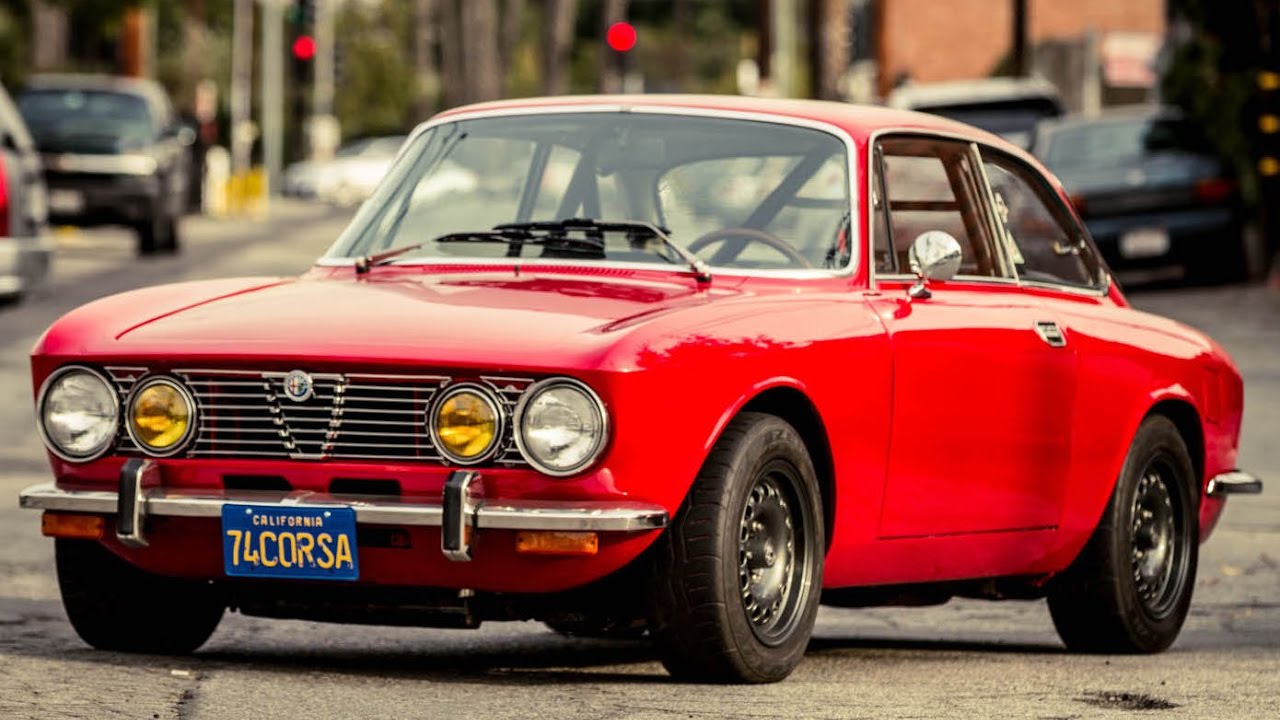 From Sweden to Italy

From what I learned, there should be about fifteen examples of these special-dial Carrera watches that were given out to top Volvo executives in the early ’70s. If you find them a bit boring, there is another chronograph for you to consider. While Volvo Heuers belong on the “unobtainium” end of the watch spectrum, the 1980s Rodania for Alfa Romeo is quite easy to come by. It is a “youngtimer” with an automatic  Valjoux 7750 movement, and it resurfaces regularly. 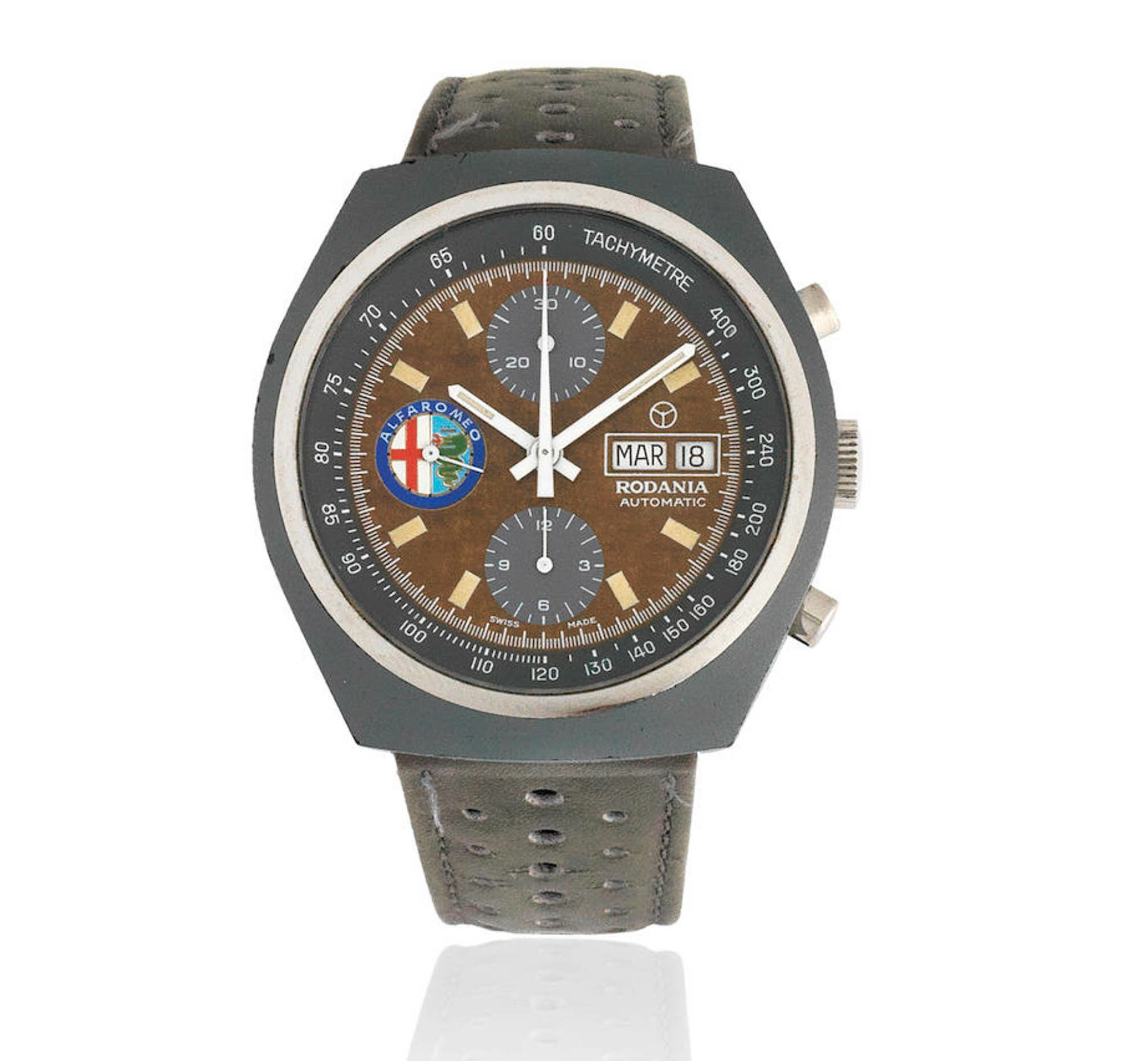 If it weren’t for the barrel case, it would already be sitting in my collection. I find this particular case chunky, but the dial is gorgeous. The wide, faded gray tachymeter contrasts with the brown mesh-like textured dial perfectly. I am not a fan of an artificial “tropical” patina some watch speculators can fabricate, but this is the real thing. Even better if it nicely matches with sandy, aged yellow lume. 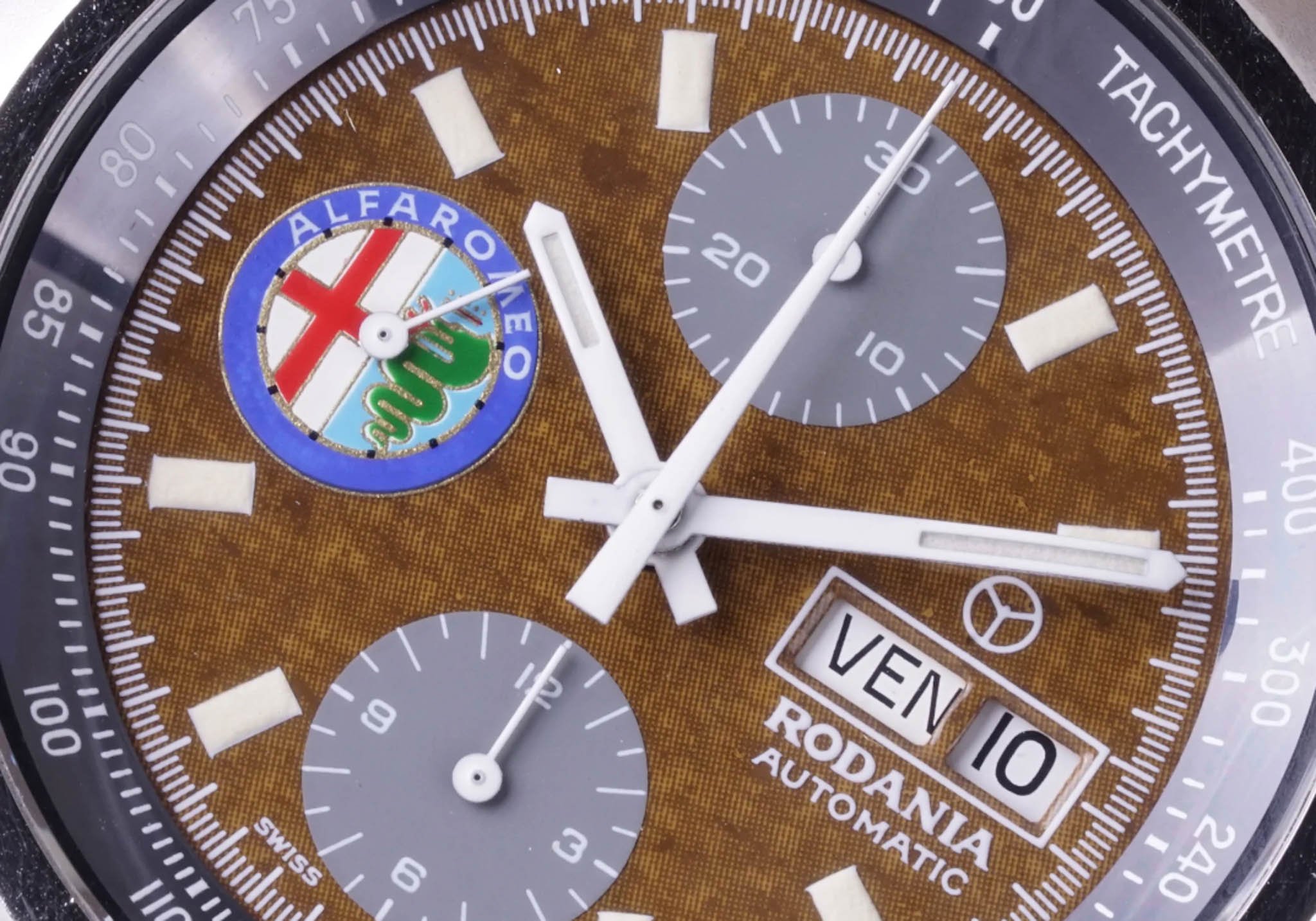 I always wanted a Bertone-designed Alfa Romeo 2000 GTV. It represents the best Italian car design of the early 1970s. And I could imagine driving it while wearing this Rodania chronograph. The colorful Alfa Romeo crest is a piece of art, and I wanted some decent touch to put it on the dial. I believe this Rodania watch has one of the best integrations of a car brand’s logo into a watch dial. The designers worked it into the running-seconds sub-register, and it looks daringly good. Notice the tiny black squares around the gold rim that even allow it to display the seconds fairly accurately. 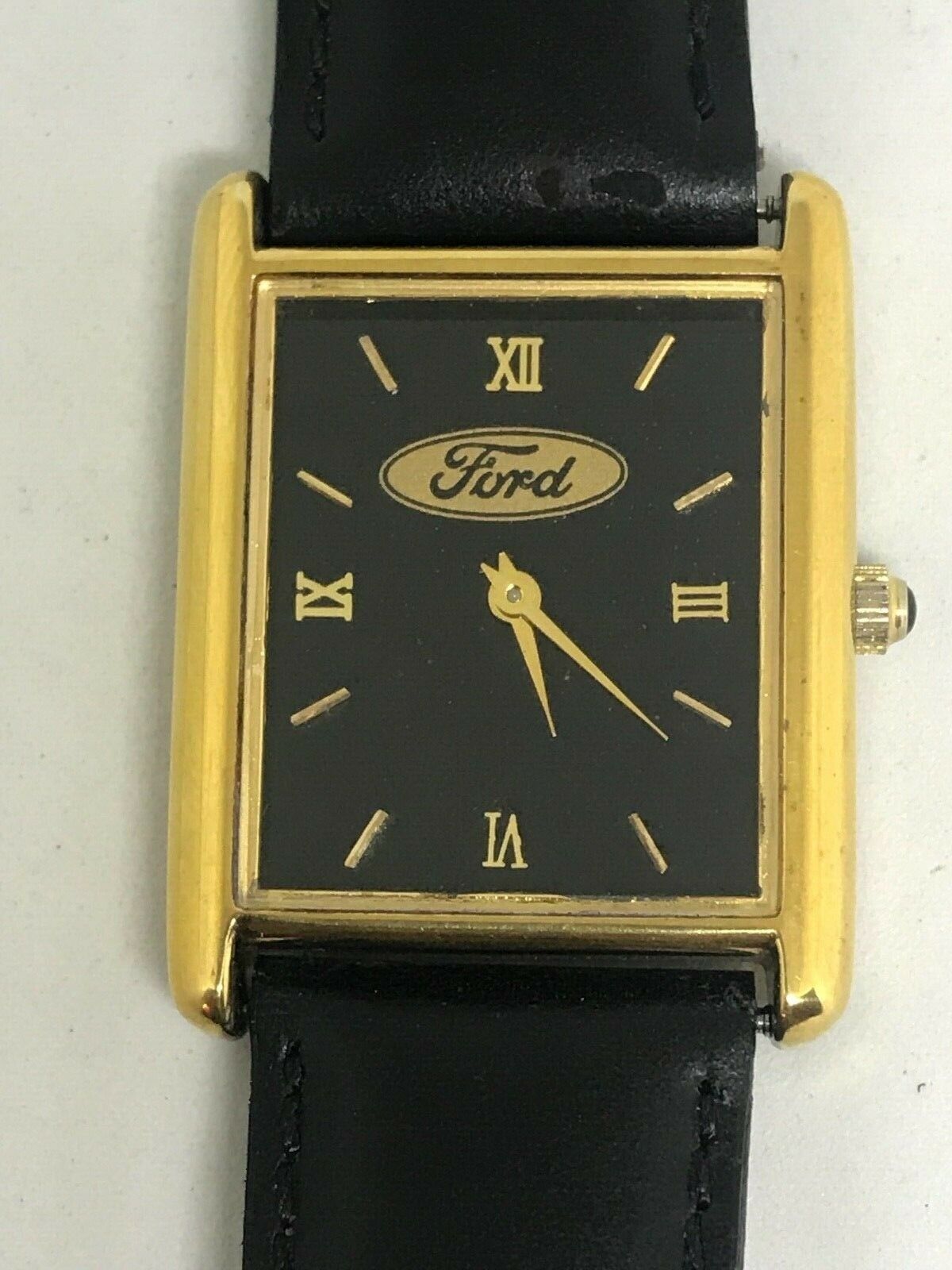 The opposite of Ford

This is one of the watches that I regret not buying. Why? Because it was 5 US dollars. Believe me, it’s not iconic just because it’s housed in a case highly reminiscent of another iconic watch. In fact, it’s almost a joke — a gold-plated Tank-style watch with Roman numerals and a quartz movement. I have no idea about the watch’s background. I am sure there was also another version with a white dial that I liked even better. Is it a great watch? Not really. But it would’ve made a great addition to the collection if I had grabbed it back then for five bucks. I can imagine wearing it while cruising around in a 1975 Ford Cortina. Happy hunting!