As our host with the most Mike Stockton is busy with other things this week, I’m going to take over his world famous #TBT to bring you yet another amazing time piece from a brand that failed victim to the quartz crisis; Angelus.

A good few months ago when I did a “guest appearance” on #TBT I talked a bit about the Angelus L.E. that was issued to the Hungarian Air Force in the 1950’s. I still have that watch in my collection but even then I was eyeing another model.

I love watches with complications, let that be a moon phase, chronograph, triple calendar or even just a date. When you have them combined, as in this case, that’s something worth a closer look. The Chronodato models  were on my radar (and my wish list) for a long time but the right example did not pop up. In the beginning of this year I spotted a gold plated example on eBay, which was serviced and in fairly good shape according to the seller and the photos he provided. I pulled the trigger and got the watch for a little over €1K.

It just so happened that while I was waiting for delivery of this model a much rarer version was listed on my own turf, German eBay. The listing title lacked anything specific other than “Angelus” and there was no mention of the chronograph or the name Chronodato so the bid was still low. With a bit of luck I managed to close the deal on this model for almost exactly the same price as the gold plated version. This however was stainless steel in excellent condition with a crispy case where original polishing is still clearly visible. As I knew our Mike likes the model as well,  I offered him the gold plated version since I had no intention of keeping both. He agreed and the Fratello family gained 2 Angelus Chronodato watches at once; one in gold plated and one in stainless steel. So exactly what is this model and its significance in “wristory” (sorry for stealing your shine Shane @woundforlife)? Let’s find out. 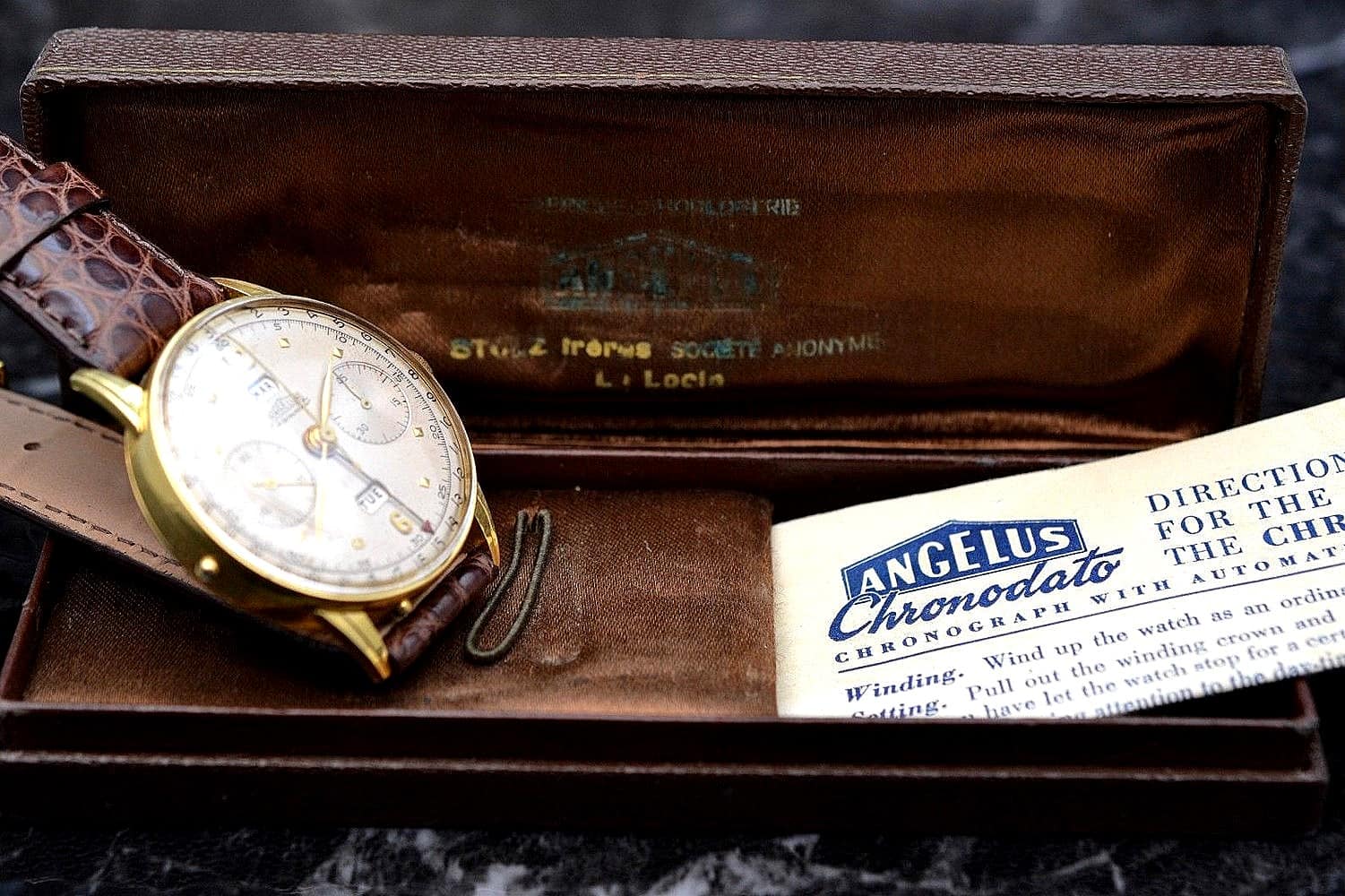 The Chronodato model was introduced by Swiss watchmaking power house Angelus in 1942. This was the world’s first chronograph with a full calendar (day-date and month) and due to these features, it became highly popular among consumers. So much so, in fact, that the line was in production for roughly 10 years. In the 1950’s, however, the Chronodato model was replaced by the amazing Chrono-DatoLuxe family, which lacked the month display but had a moon-phase and a big date instead. It was produced in stainless steel, gold plated and solid gold versions with different dial variations. The most common and still easily acquirable version is the gold plated case model, which is easy to spot as the caseback is stainless steel, whereas the solid gold version has a gold caseback. 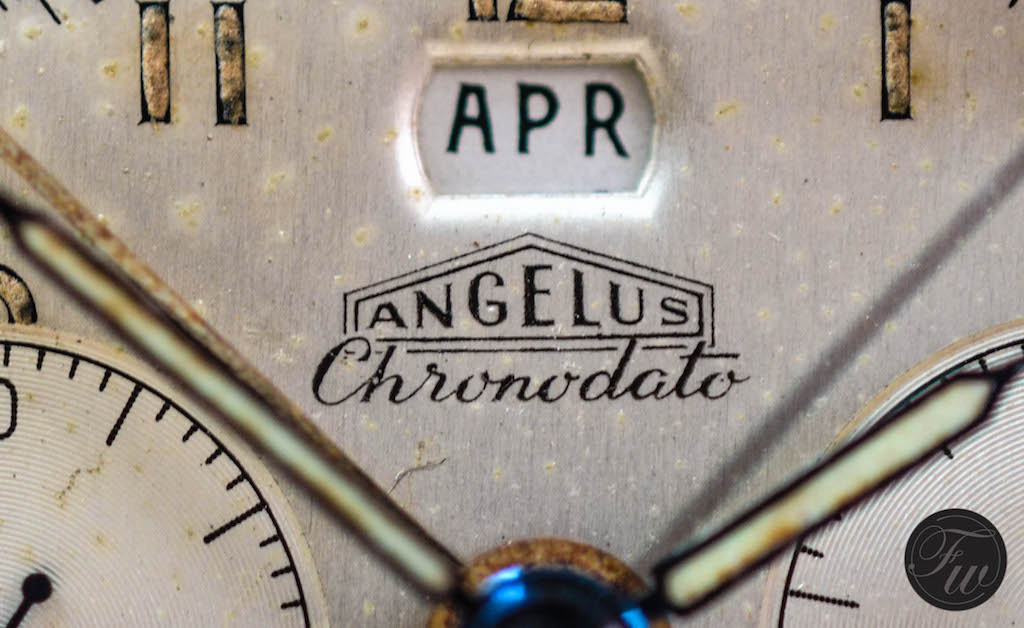 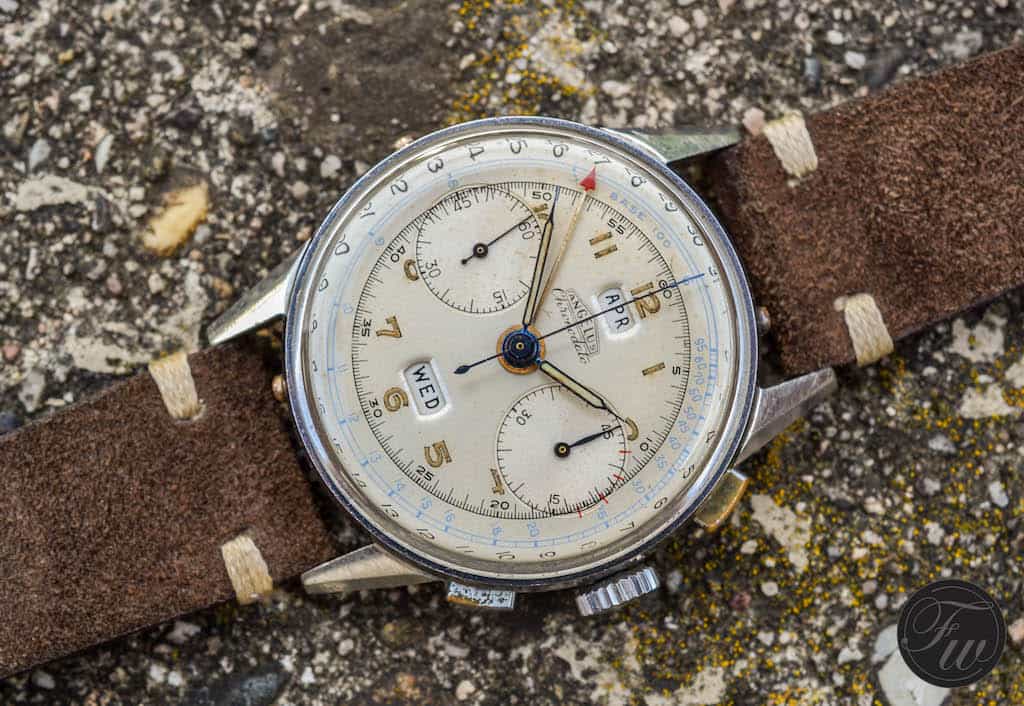 It is a rather large watch at approx. 38 millimeters and thick too, close to 13mm. Not a flat watch by any means but still sits comfortably on the wrist and does not stick out too much even with the high crystal these watches usually/should come with. Below you can see the various case types the Chronodato was sold with, pay attention to the little photos showing the different lug variations available at the time. 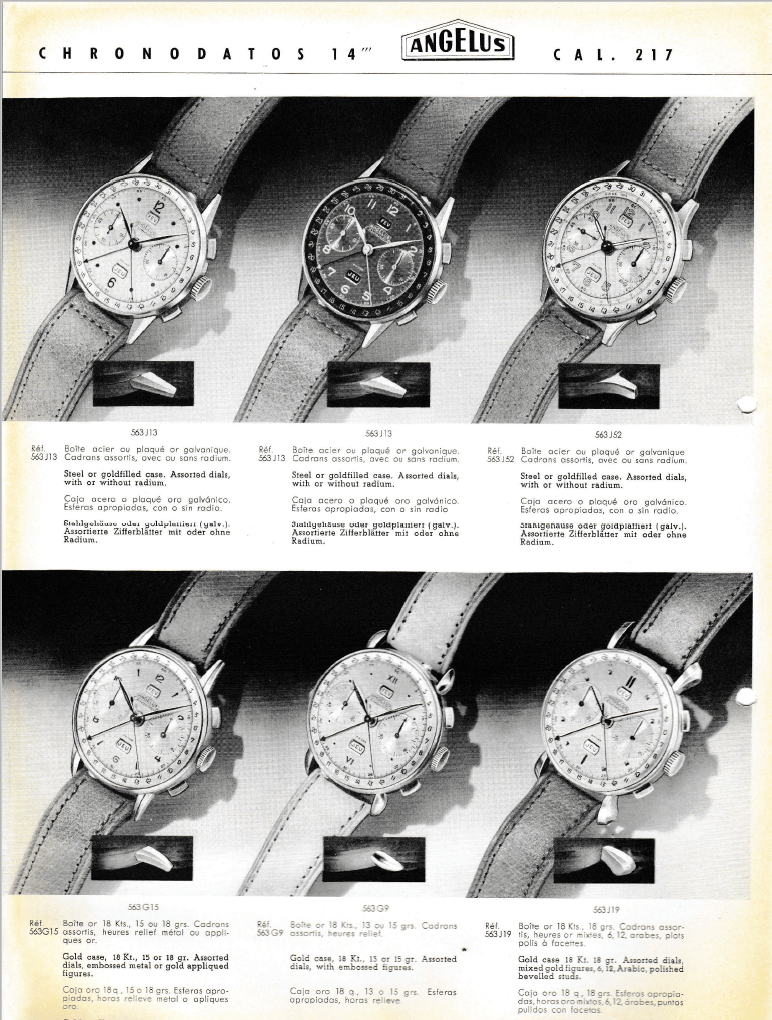 Copy of a 1948 Angelus catalog with the different Chronodato variants at the time. Thank you Sébastien Chaulmontet for the catalog.

On the right side of the case you have the usual chronograph pushers as well as the crown and on the left side you have the hidden pusher to adjust the date. However, if you push it, the day indicator also jumps. Between the lower lugs among 6 and 7 o’clock you can find the second adjuster pusher for the day so if the date is set to the correct number but the day is not matching you can adjust that too. 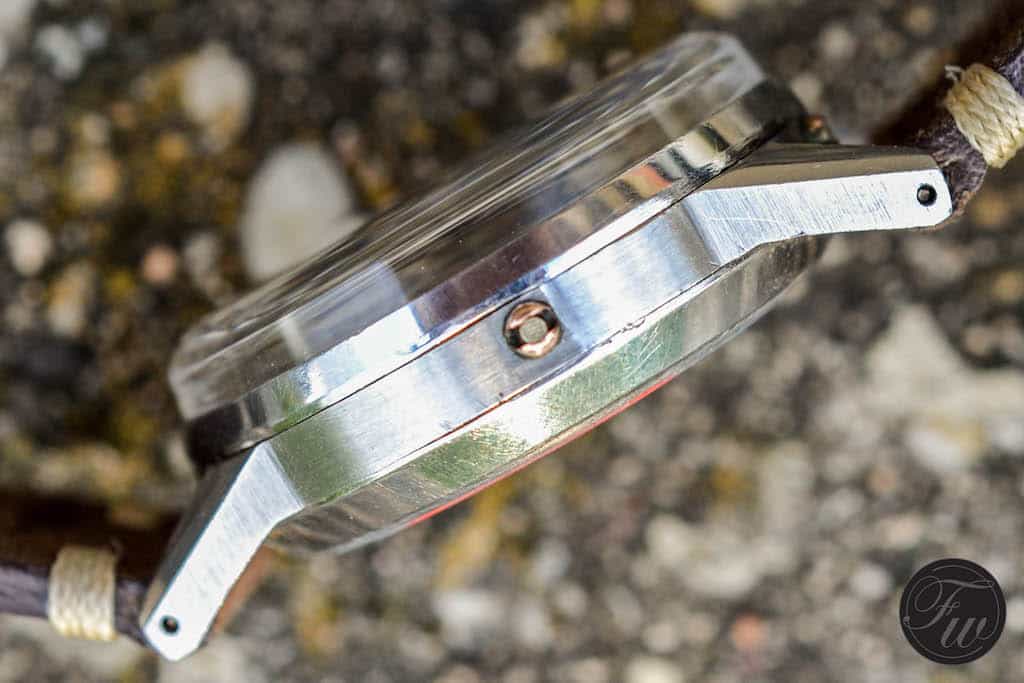 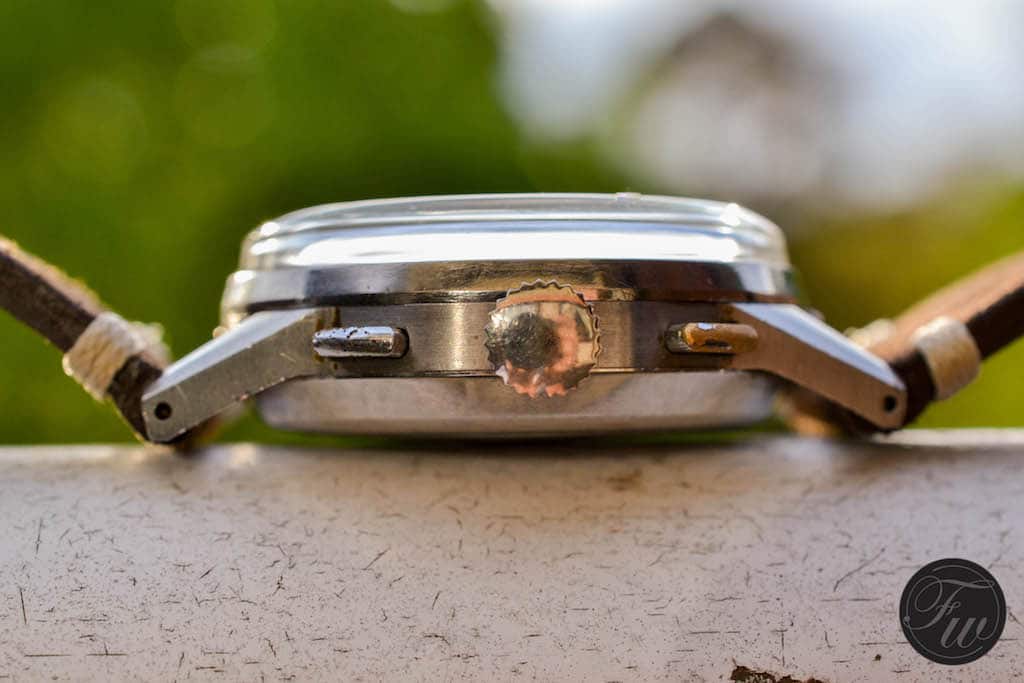 The caseback has a nice brushed finish, it is snap-on and has the Angelus logo as well as the serial number. The stainless steel models I came across had the logo and the serial number on the outside, or the serial numbers only. Low serial number models, like mine, have the logo so it is safe to assume that after a while the company decided to get rid of the logo from the case back. The solid gold models have the logo only or the logo and the gold hallmarks but never a serial: that is always on the case back. Gold plated models, according to my research, had the logo but around the 272XXX serial number mark it disappeared and was not displayed after that. The original finish of the case is a mixture of polished and brushed surfaces. The bezel holding the crystal is polished whereas the sides of the case are horizontally brushed. The lugs are vertically brushed creating a visual contrast on the case finish. 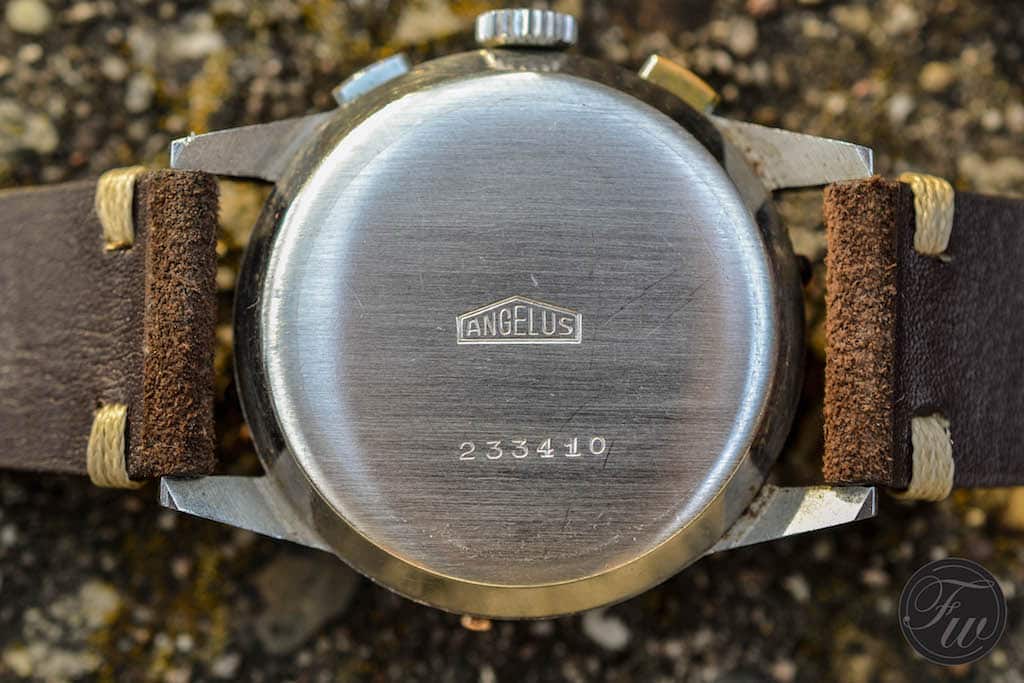 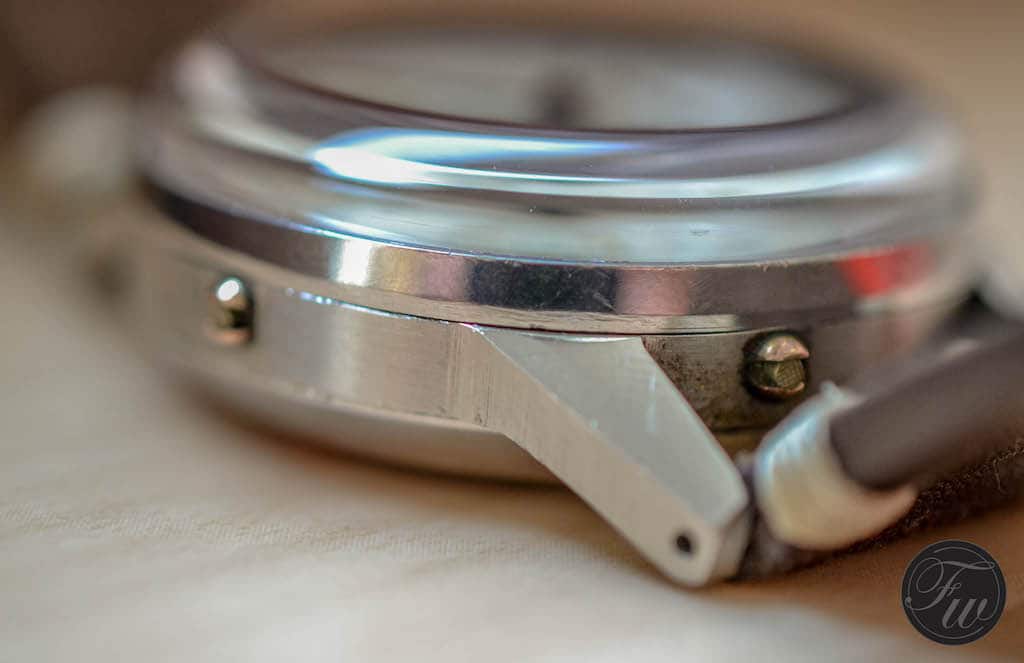 Now what’s really important to see is that this watch is a so-called “manufacture” meaning that the company did not use a movement from another brand but did everything (development, assembly) in-house. The movement is the Angelus caliber SF 217, which is based on the SF 215 that I already featured in my aforementioned article about the Angelus L.E. Interestingly enough, the SF 215 is the same movement Panerai used in their Mare Nostrum chronograph so technically the basis of the Angelus Chronodato is the same as one of the first Panerai chronographs. The SF 217 is a 17 Jewel hand wound column-wheel movement with triple calendar and chronograph features. It’s a great and reliable movement but quite delicate to handle and since it’s not very common parts are pretty hard to come by if anything bites the dust. 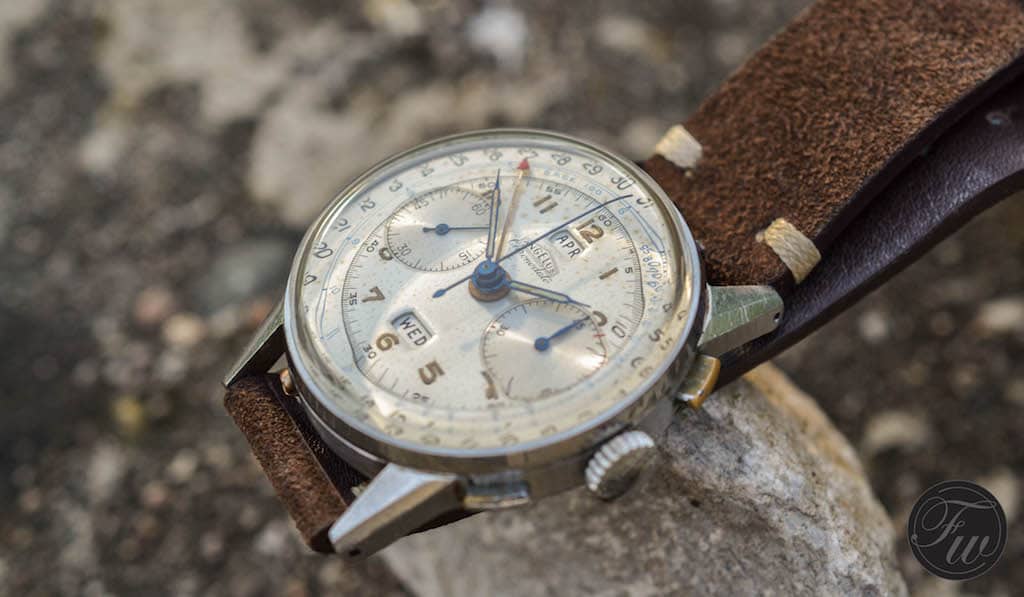 During the years, Chronodato models were offered with a large number of different dials. The layout, however, was mostly the same: you’d find the chronograph seconds counter framing the dial and outside of that you’d have the numbers for the date from 1 to 31. In some instances, like with my watch, between these 2 rings you’d have a telemeter scale as well. This is, however, not to often seen. Regarding the colors, white (well, light) or black (some say grey as well, I think it’s a faded black) were the main versions. Some dials turned beige/yellow over time but as far as I’m concerned they started their lives as white – or cream at worst. 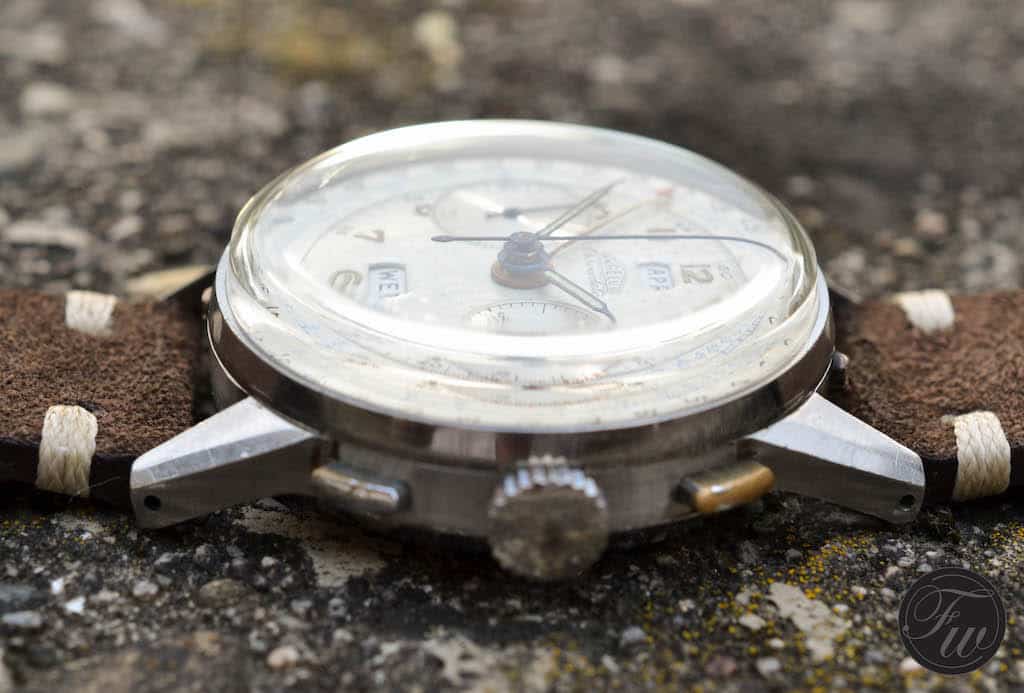 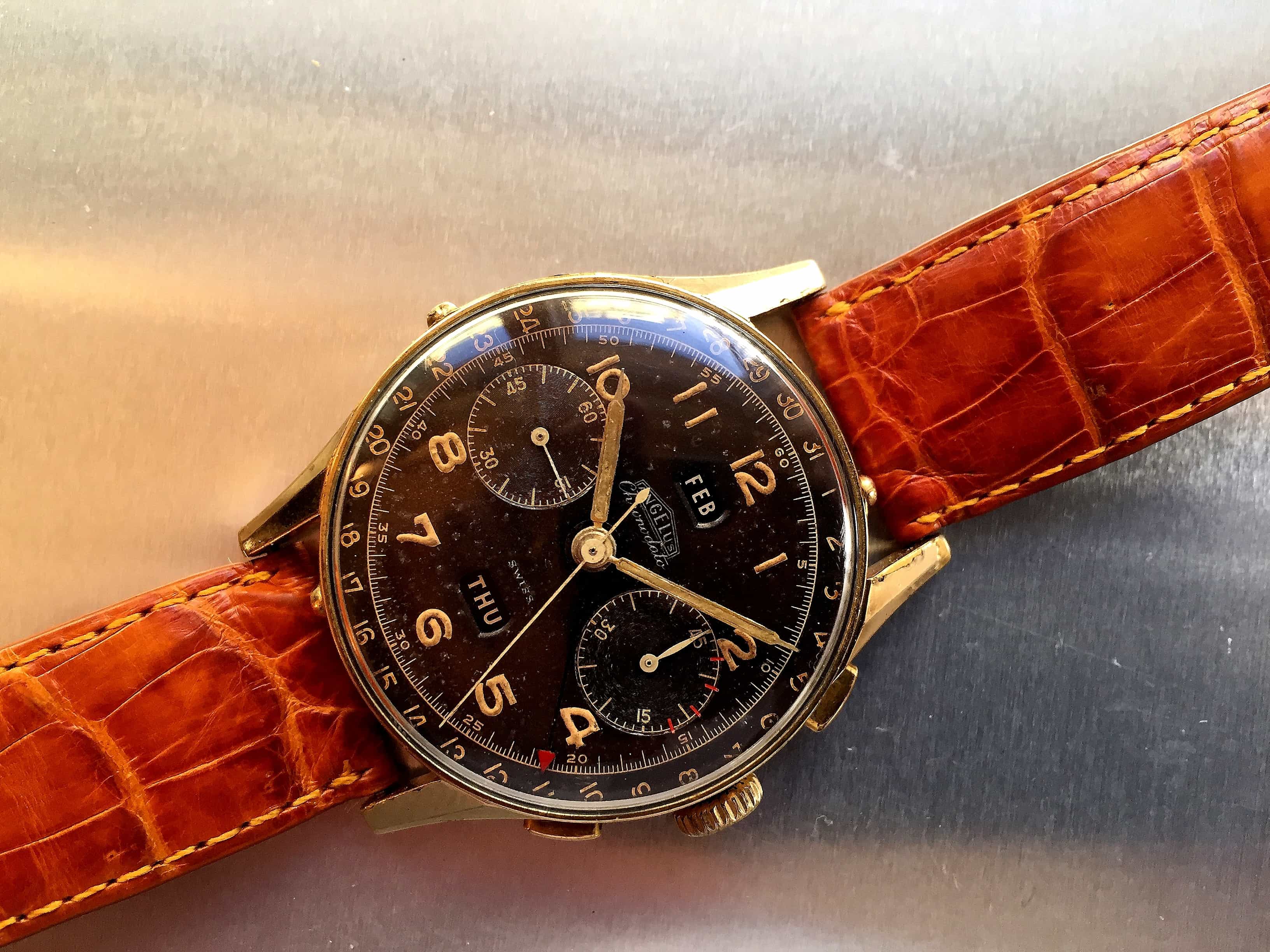 The scarcest models are the stainless steel versions with a black dial. You don’t see many of those around. Regarding the layout of the dial, it is pretty simple. You have a 2-register chronograph where the sub dials are at 3 (45 minutes counter) and 9 (continues seconds sub register) and a central chronograph second hand. The window for the month is just below 12 and the window for the name of the day is above the 6. The Angelus logo and the model name “Chronodato” below it is just right under the month window and in case of the earliest examples (around the 21XXXX reference number range) you’d also find “anti-magnetic” above the day window. On some later models, but still with relatively low serials, the “Swiss” indication replaced the aforementioned “anti-magnetic” writing. Some time later both texts disappeared. The dials can be painted but quite often you can see applied indexes or even numerals. 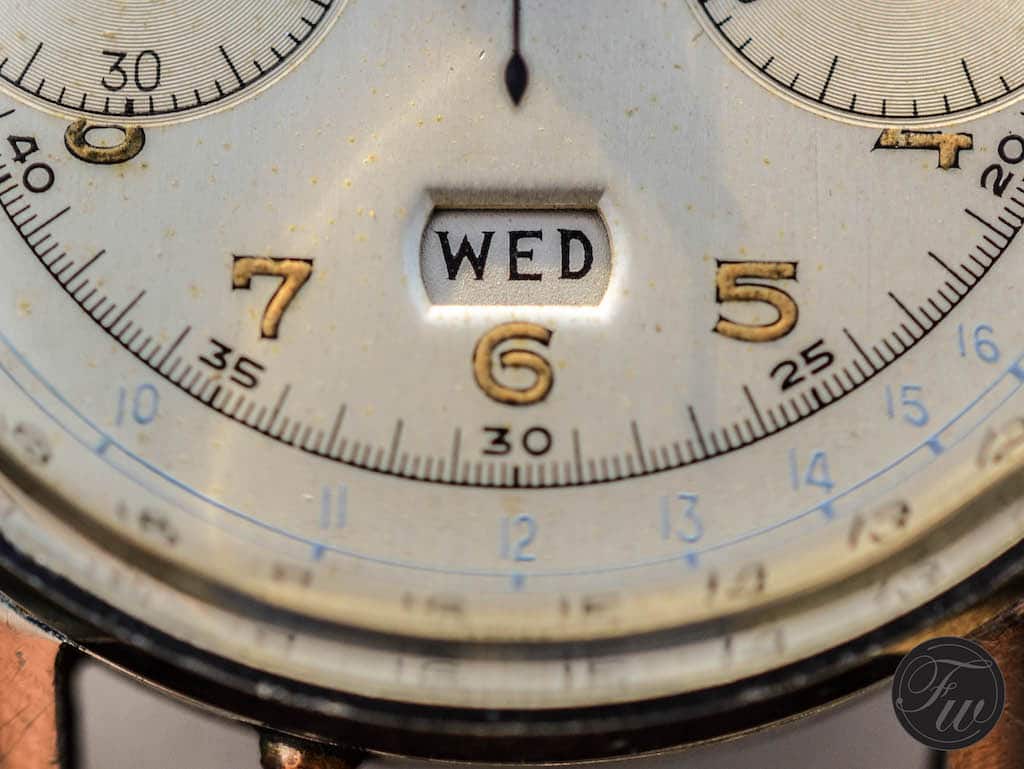 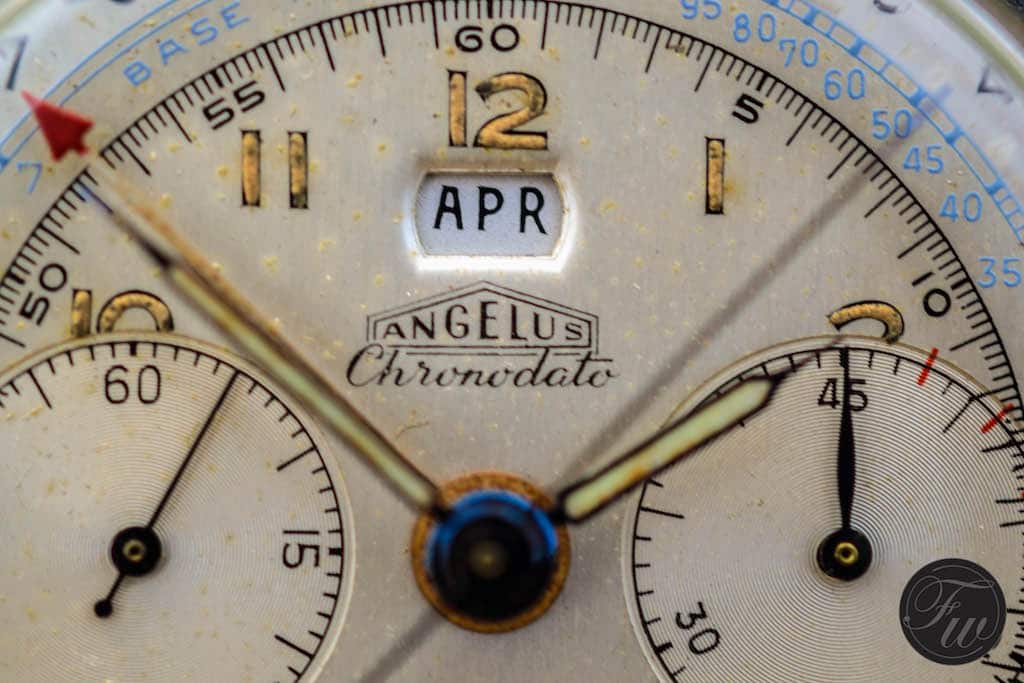 Regarding availability, these watches are still out here to be picked up for a fairly cheap price. You can find a decent example in the €1200-€1500 price range, but of course solid gold or steel models might fetch a slightly higher amount. That’s not bad at all if you think about what the Chronodato can offer. It’s a relatively common watch, but with an in-house movement, complications of a chronograph AND triple date in a large 38mm-sized case. The last time I checked watches with such features, they fetched a pretty penny. The only concern you should have is the availability of parts. Try and look for the best possible example in fully working condition and minimize the risk of of needing a repair. 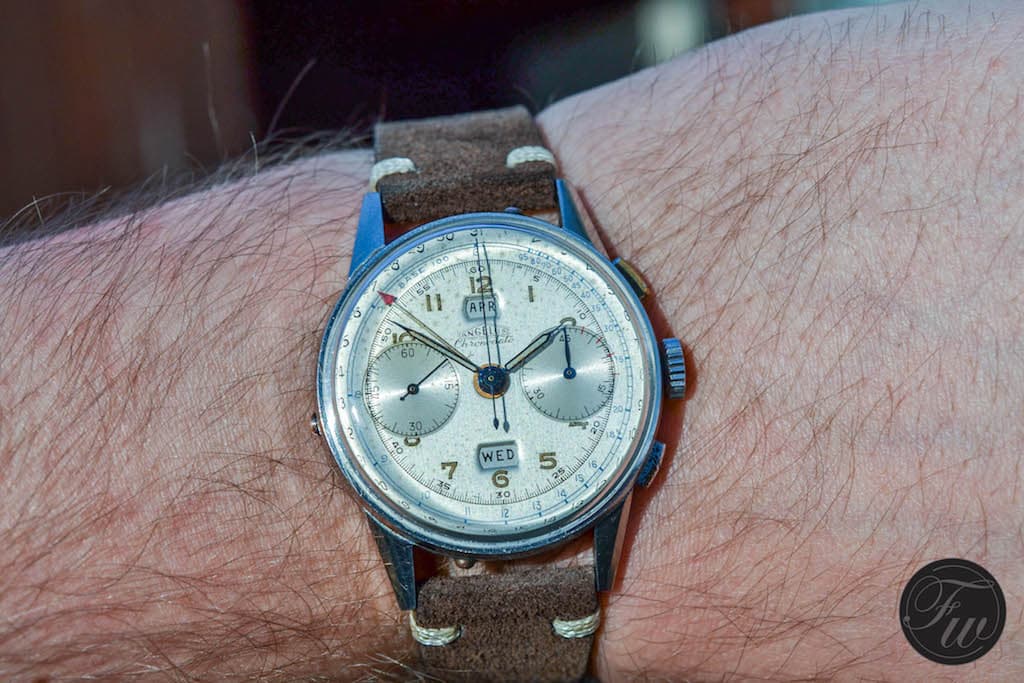 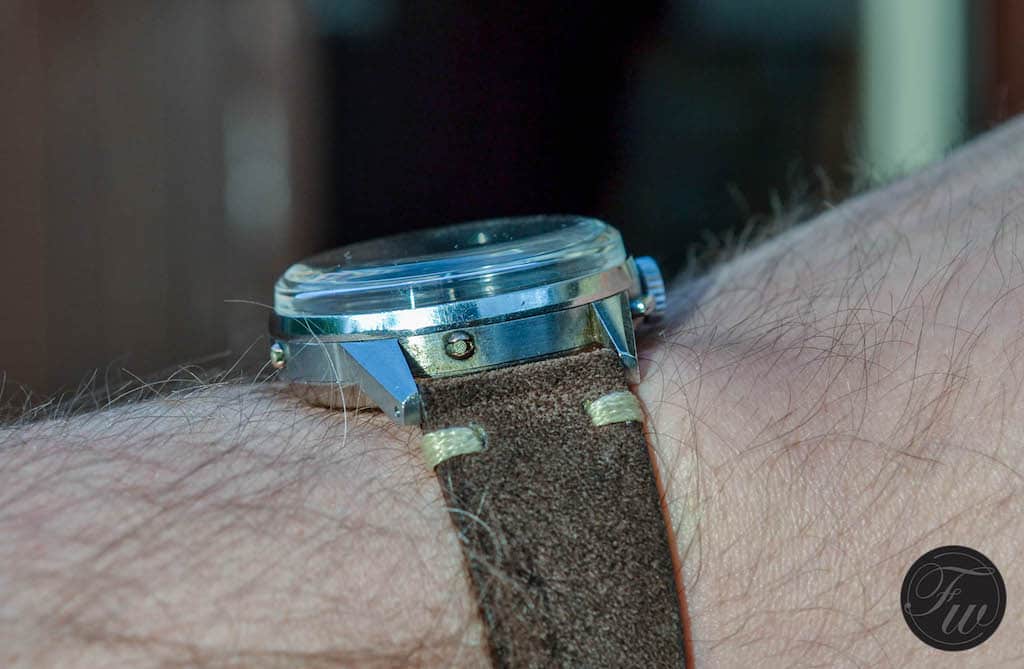 This year will be an exciting one for the Angelus. As most of you probably know the brand has been resurrected last year. This time in a totally different segment compared to where it used to be in for all those years. Sébastien Chaulmontet, head of innovations, is an avid chronograph and Angelus collector himself so it is safe to say that Angelus is in great hands with him and his team. He has something truly wonderful in the making, which I cannot talk to you about just yet, but I can promise you it will be awesome.

We will report about it on Fratello when the time comes.  However, as negotiations are still ongoing, let me just say that it will be an instant classic for the lovers of Angelus.

In the meantime, I’m trying to get my hands on one of the latest 2016 novelties from Angelus to do a thorough review. I already spoke about the new models in this article and was amazed by each and every one of them so I’m really excited about the opportunity of getting one for an in-depth review. For now, keep your eyes open for Angelus watches, travel and table clocks; they are incredible timepieces with rich history and innovation.