#TBT The Angelus Medical With A Magnificent Magnifier

When you say “medical watch,” I always see just one watch. It’s the Angelus Medical that takes the crown. It stands way above all other medical watches, even ahead of 1960s Longines or my favorite watch from Universal Genève, the Medico Compax.

Pulsation scales on dials have always enamored me. The reason is simple: I see a medical watch as the finest and most noble complication ever integrated into a watch. A power reserve, moonphase, minute repeater, or any other from the long list of crazy complications I have been introducing over the last few years on #TBT are all useful and creative inventions. But the ability to read a heart rate is just so human. It reminds me of the transience of our being and touches upon the fragility of our lives. 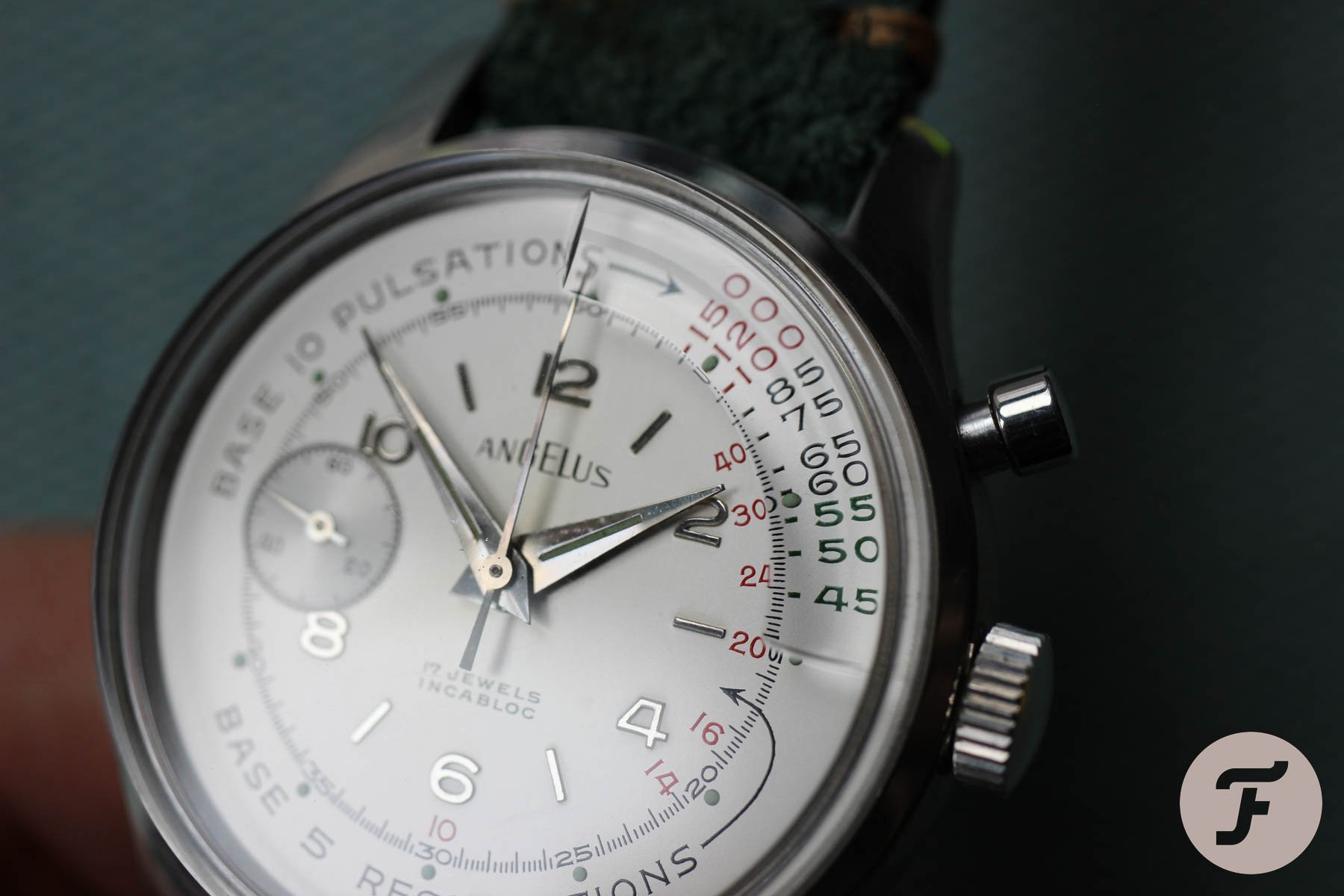 Is it a complication at all?

I thought hard about whether I can even call a pulsation scale a real complication. Some people may argue with me that a medical watch is not a novel complication. There are no new mechanics. Technically speaking, the Angelus Medical and watches similar to it were and never will be anything but chronographs. Full stop. I agree to the extent that including an egg-boiling scale would hardly score as a new complication. But the pulsation dial has had such a special contribution to our history. It literally helped save lives. It was recognized by major watch manufacturers, and dozens of re-interpretations throughout the years have helped to establish it as a category of its own.

Why the Angelus Medical is so special

Usually, a chronograph just gets an additional pulsation scale around the dial. Without much effort, you get a chronograph with a heart-rate-reading function. The Universal Genève Medico Compax from the 1940s/1950s and the Longines Pulsometer from the 1960s are good examples. But I believe Angelus decided to do it in a different way, considering what a pulsation chronograph as a dedicated wrist tool would look like. That might be the reason why Angelus came up with a modification of the Valjoux 22. Once Angelus dropped the minute counter, a lot of space with which to play opened up on the dial. 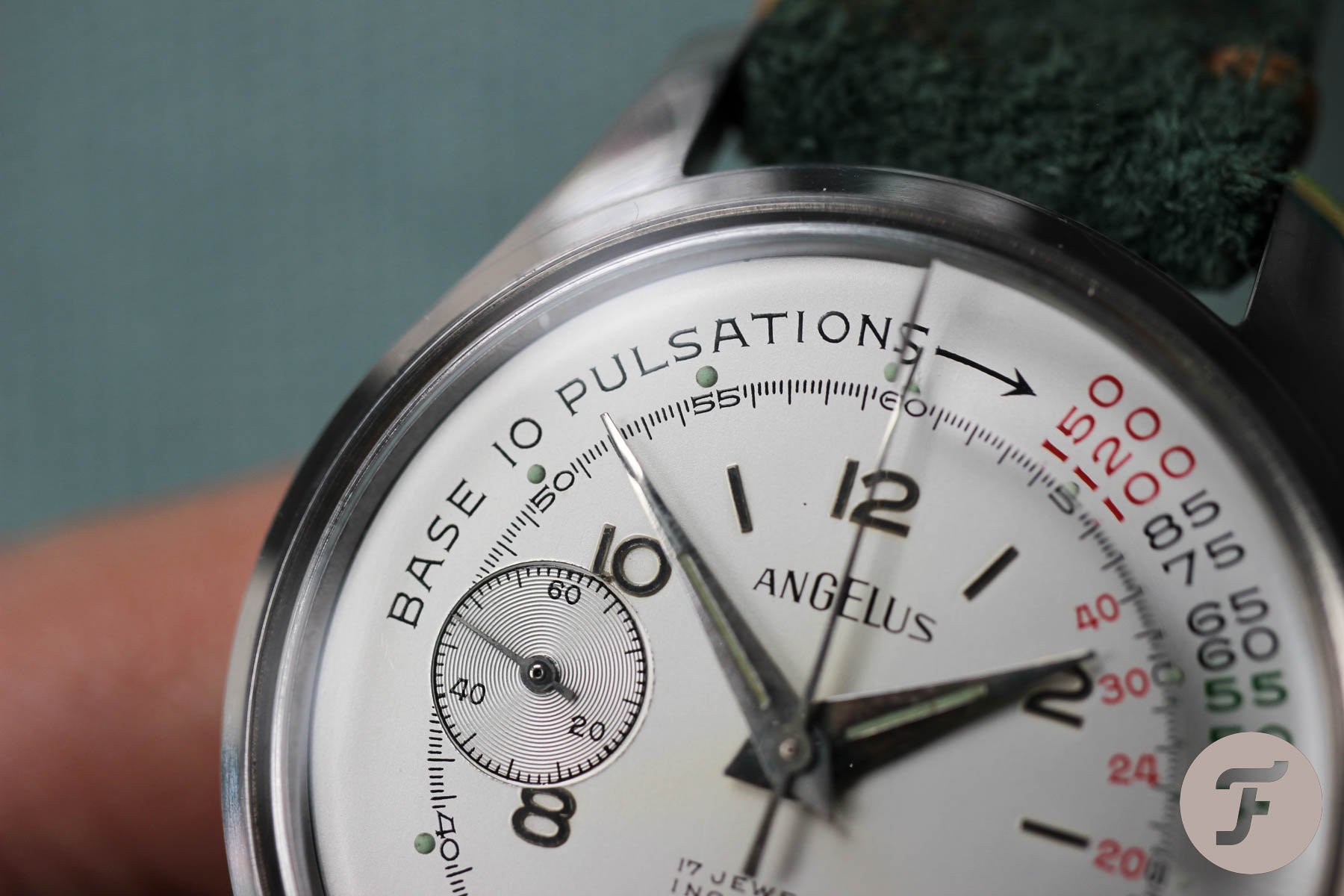 The design is utilitarian, playful, and creative. The small seconds sub-dial is the only one left, and it’s tightly squeezed between 8 and 10 o’clock. What I really like is the imbalance that the really small small-seconds indicator creates. It intensifies the curiosity of what the hell is going on on the other side of the dial.

The minute track is pushed deep inside the center of the dial. Notice that the numbers that mark the five-minute intervals are squeezed directly into the minute track itself. This creates even more white space for what is probably the best take on the pulsation scale that I’ve ever seen. The “Base 10 Pulsation” instruction is big and perfectly legible. It’s followed by an arrow pointing to a 10-step scale ranging from 45 to 150 beats. 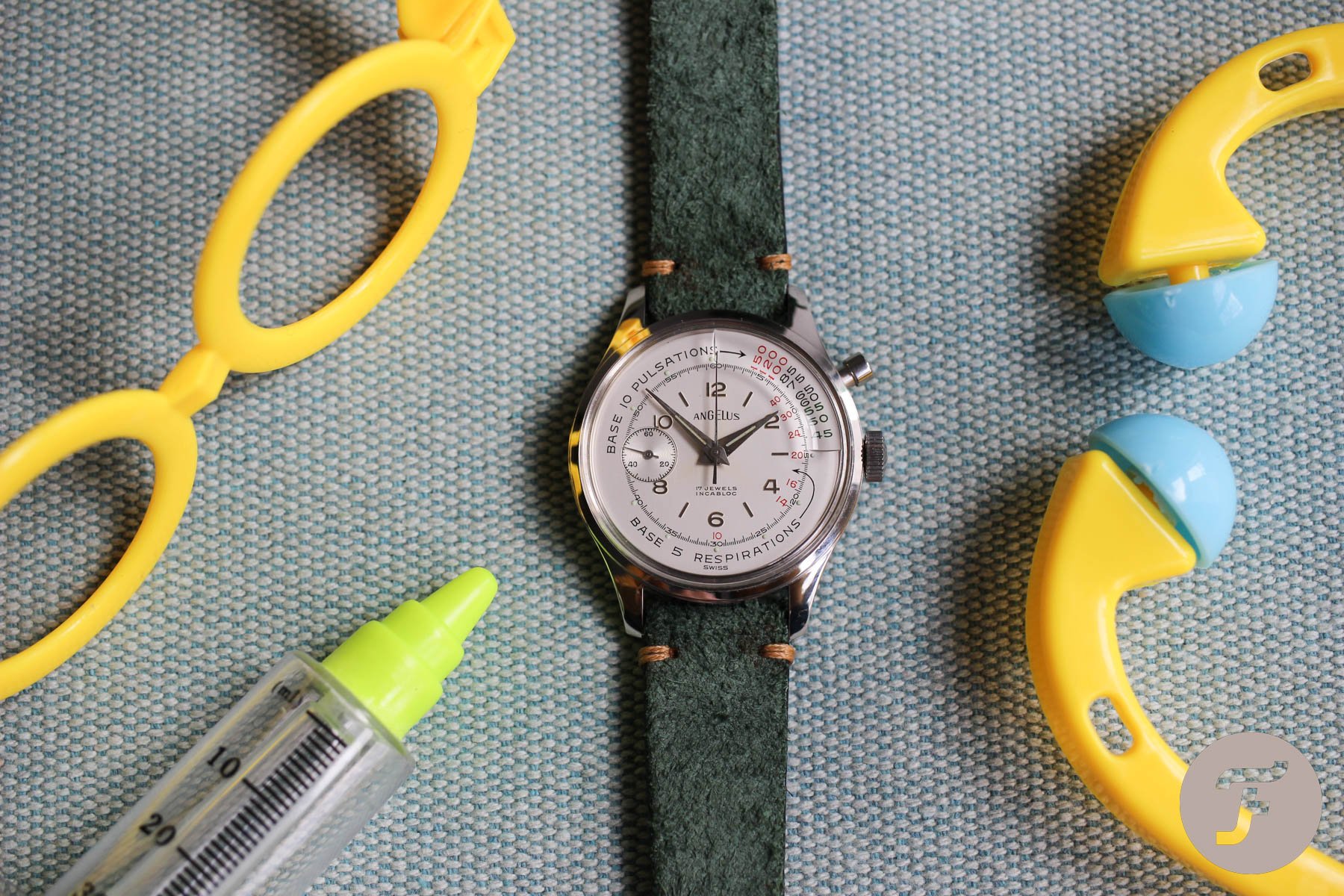 Before I get to the next point, let’s summarize how this pulsometer actually works. Once you find someone’s pulse, you start the chronograph. Once you count ten heartbeats, you stop the chronograph and read the heart rate indicated on the scale. Most medical chronographs use 15- or 30-pulsation scales that basically multiply the number of beats, so you don’t need to measure it for the whole minute. And here is another way in which the Angelus Medical is unique, as it requires just 10 pulsations to read. Counting 10 pulsations requires less time and allows you to save important seconds. I am no medic, but it should also be quite accurate. 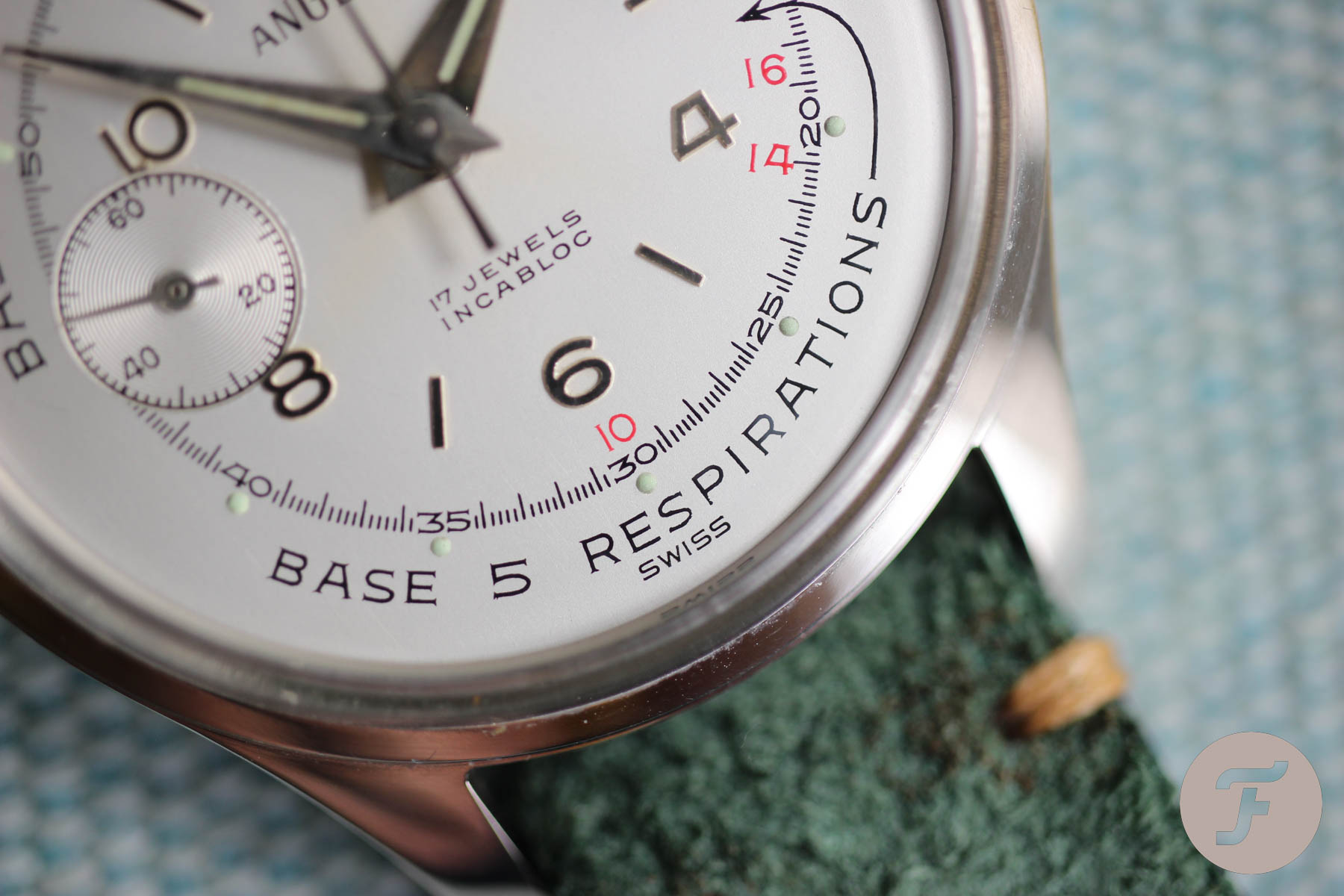 Other pulsation chronographs offer more detailed scaling distributed almost around the entire area and calculated to more pulsations. The Angelus Medical, however, knows it’s not an exact scientific instrument. Rather, it is an indicative yet still-reliable tool that simplifies the pulsation scale and minimizes the effort for speed of operation. 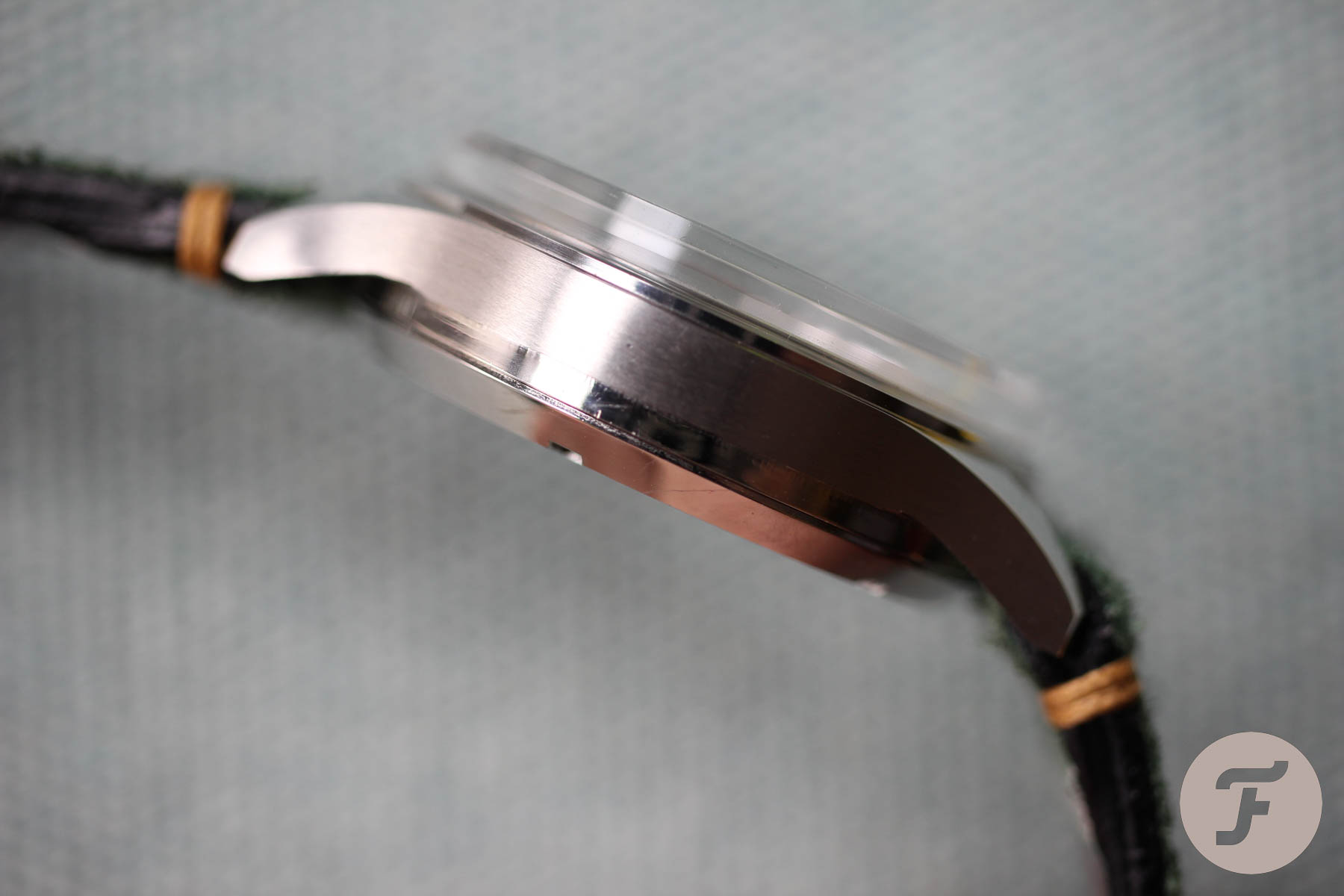 Now for the most impressive feature of Angelus Medical. It’s nothing other than the impressive magnifying “cyclops” arc spreading from 12 to 3 o’clock, right above the pulsation scale. And I can tell you, it’s unique in all aspects and hard to capture in pictures, which really dulls its expressiveness. The most surprising element is the height of the Plexiglass and the sharp edge on the top. If there are sharp-edged crystals on other watches, they are always protected by the bezel and hence nested so well that you can’t see the edge. But you have never seen such Plexi as on the Angelus Medical. 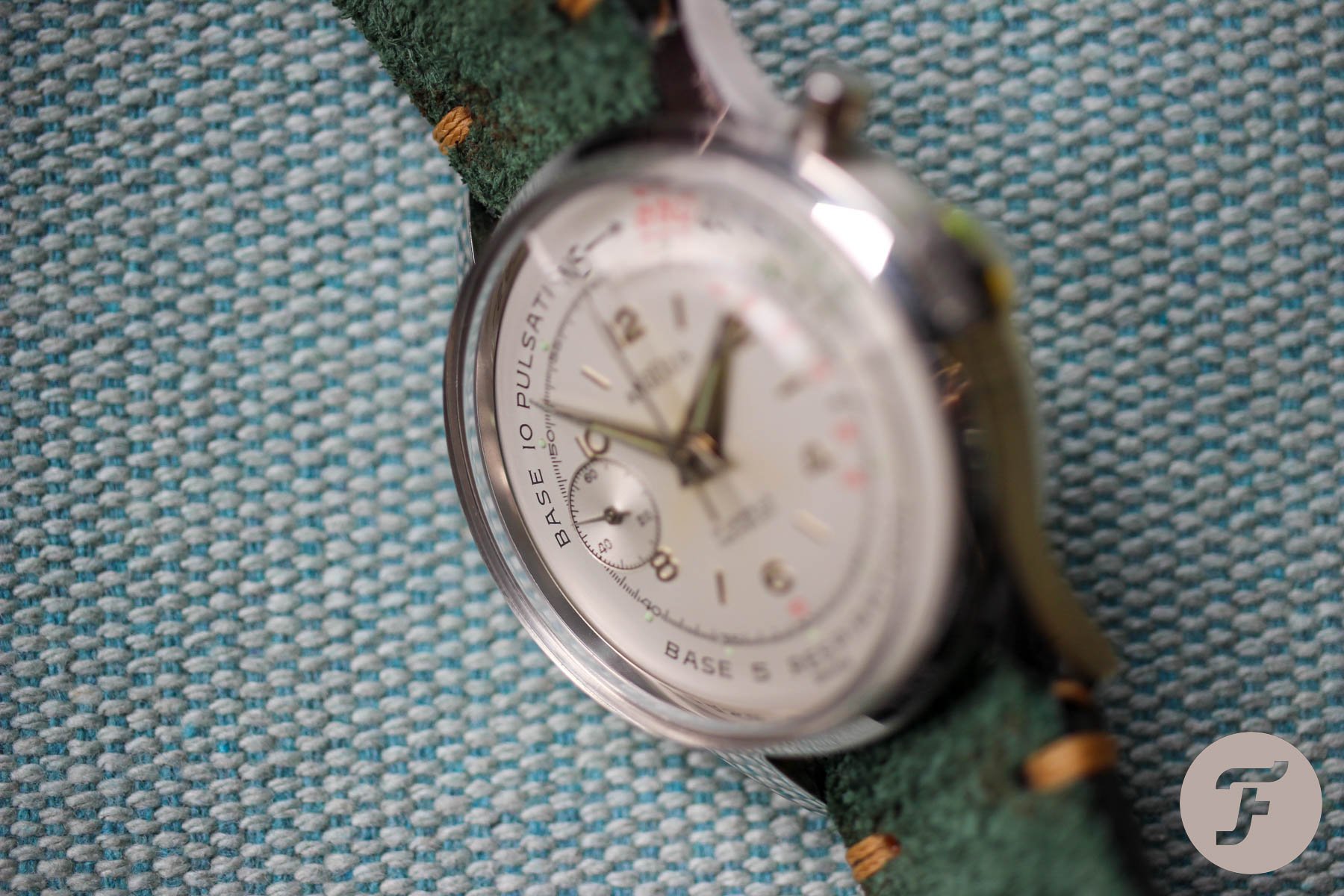 This crystal is also quite deceiving. From the top, it looks like a standard Plexiglass with no oddities to note. But from the side, this watch looks like a tuna can. Only if you start turning the watch around in your hand do you see that naked transparent mass of acrylic. It looks inexplicably high. Touching the crystal with the tip of your finger is sensational too. From a practical standpoint, I have to say I was really worried about hurting the crystal edge here and there. This is something I usually don’t worry about as a vintage watch guy, but I guess I can’t really imagine finding a new Plexi for an Angelus Medical.

The Angelus Medical on a timeline

We have no precise information on the release of the Angelus Medical, but sources indicate that it came out around 1966. That means it came just a few years after the Longines Pulsometer. Big thanks to Joel Pynson, the author of one of my favorite books about chronographs, who shared scans of 1966 and 1968 Angelus catalogs with me. It is in these that the Medical appeared for the first time.

From pictures I’ve collected over the years, I got the feeling that the two-pusher version is rarer to come across. Some have a Medical logo printed on the dial, but like my example, others do not. I was searching for some patterns, but it seems there aren’t any. I found Medical written on both mono-pusher and dual-pusher versions. Thanks to Mr. Pynson, we know that the dual-pusher version was featured in the 1966 Angelus catalog, but we can’t confirm with 100% certainty that it was released first. 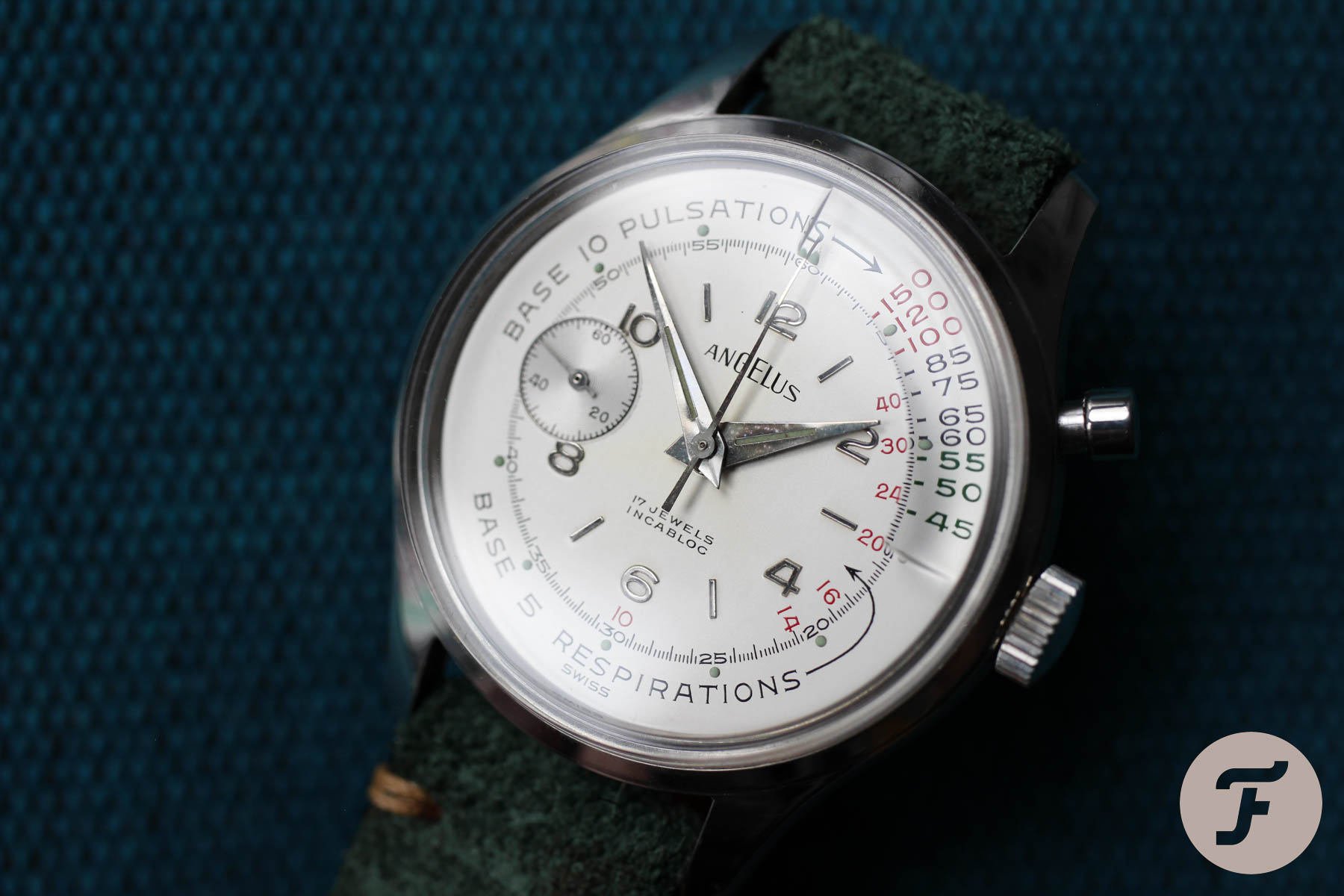 The last chronograph from Angelus

“Angelus stopped the production of its own chronograph calibers in the mid 50’s when the chronograph watch was no longer in demand,” Joel Pynson writes, explaining the integration of the Valjoux 22 caliber. He also writes, “Angelus stopped the watch production in the mid-’70s and started to concentrate on clocks. The financial status of the company was not very good.” That’s one of the explanations for why is it possible to find identical chronographs branded Vernal or Paul Portinoux — quite exotic names with some quite exotic stories.

The Vernal brand was established by a jeweler from Caracas in the “petrolstate” of Venezuela, which was a booming multicultural metropolis at the time. The jeweler Henrique Pfeffer held an interesting status, as an importer of Universal Genève watches who had his own branded dials. Vernal was one of the brands he kept registered since 1963. The poor financial condition of Angelus and the need for income probably made it easier for Vernal to get such an exquisite solo-brand watch.

The Paul Portinoux brand was registered in 1959 by Adolf Schwarcz, a US immigrant from Hungary. Angelus Medical watches branded under the Paul Portinoux label are easier to find than the Vernal. I saw one pop up in Japan two years ago. What is pretty interesting is the fact that Paul Portinoux had the movements inside the watches nicely signed. If you look under the hood of the Angelus Medical, you won’t find any Angelus branding at all.

Thanks to my new watch friend, I learned that the same watch was also branded Ardath and Rost. Fouad is a doctor and he is on a quest to collect all five models. So far, he’s managed to track down the Paul Portinoux and the Vernal. Fingers crossed he can find the rest of them too.

Below the 6 o’clock position there is another inscription reading “Base 5 Respirations” and an amusing curved arrow pointing at the second scale from the inner side of the minute track. The numbers ranging from 40 to 14 display nothing other than the per-minute respiration rate after five breaths.

As also confirmed by the 1968 catalog from Mr. Pynson, there was another version of the Angelus Medical Pulsometer that had no respiration scale and had a 30-minute counter instead. From the picture quality, it’s hard to tell whether it featured the same arc-shaped magnifier, but I assume it did. I am sure I have seen an example of such a watch with the Paul Portinoux branding. 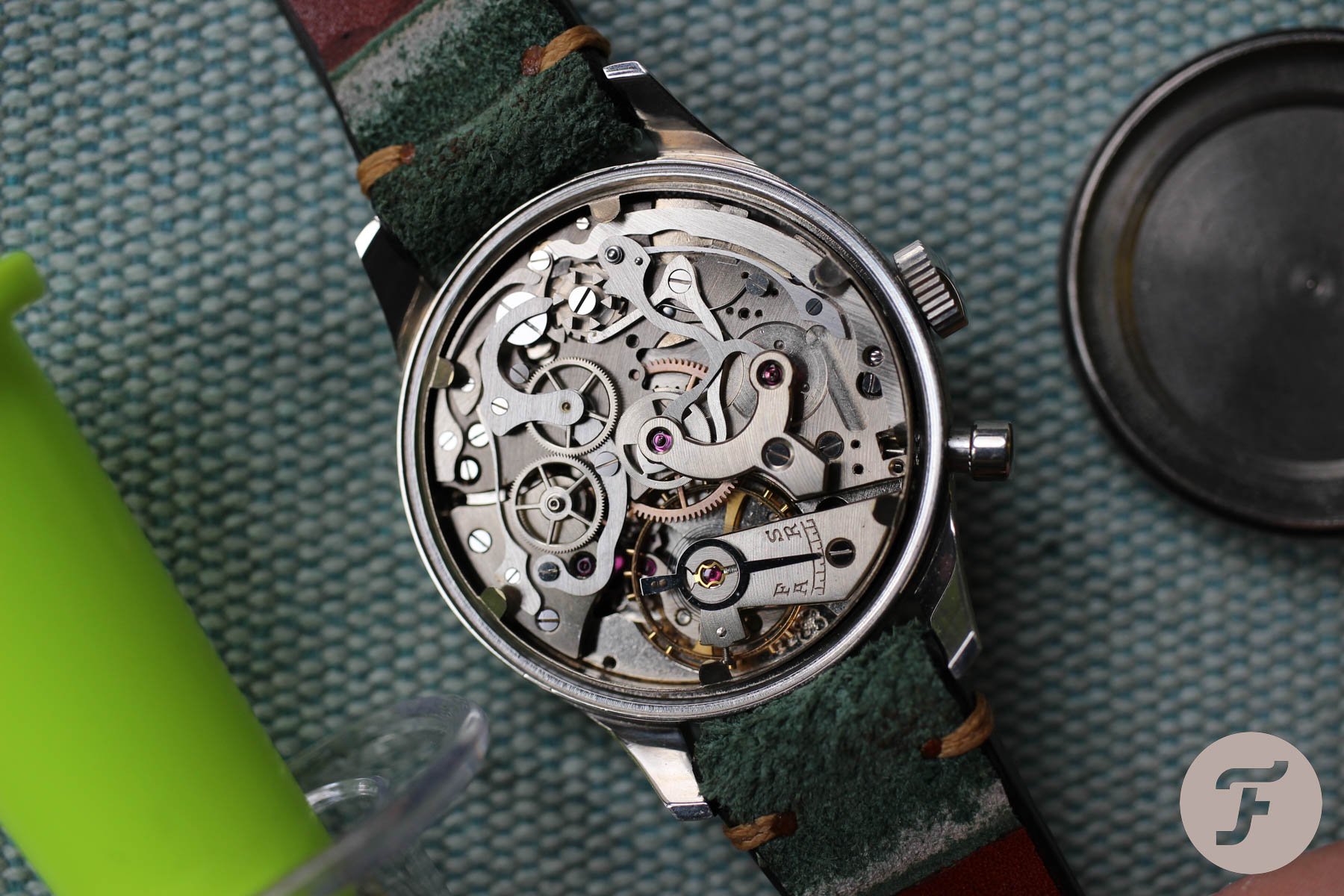 A green leather strap is quite extravagant, but it fits the unusual green detailing on the dial. I am sure some eagle-eyed reader noticed that the three bottom numerals on the pulsation scale are printed in green. The crown is also not signed. The single pusher at 2 o’clock stands out from the case much more than it does on the dual-pusher version. I really like it, and I generally prefer the mono-pusher design much more. It kind of underlines the oddity of the watch. Also, notice the small but cake-icing-like fat lume dots that are unusually placed on the outer side of the minute track. The minty-green lume on most of the Angelus Medical watches turns pale and sometimes develops a “dirty” wabi-sabi look. 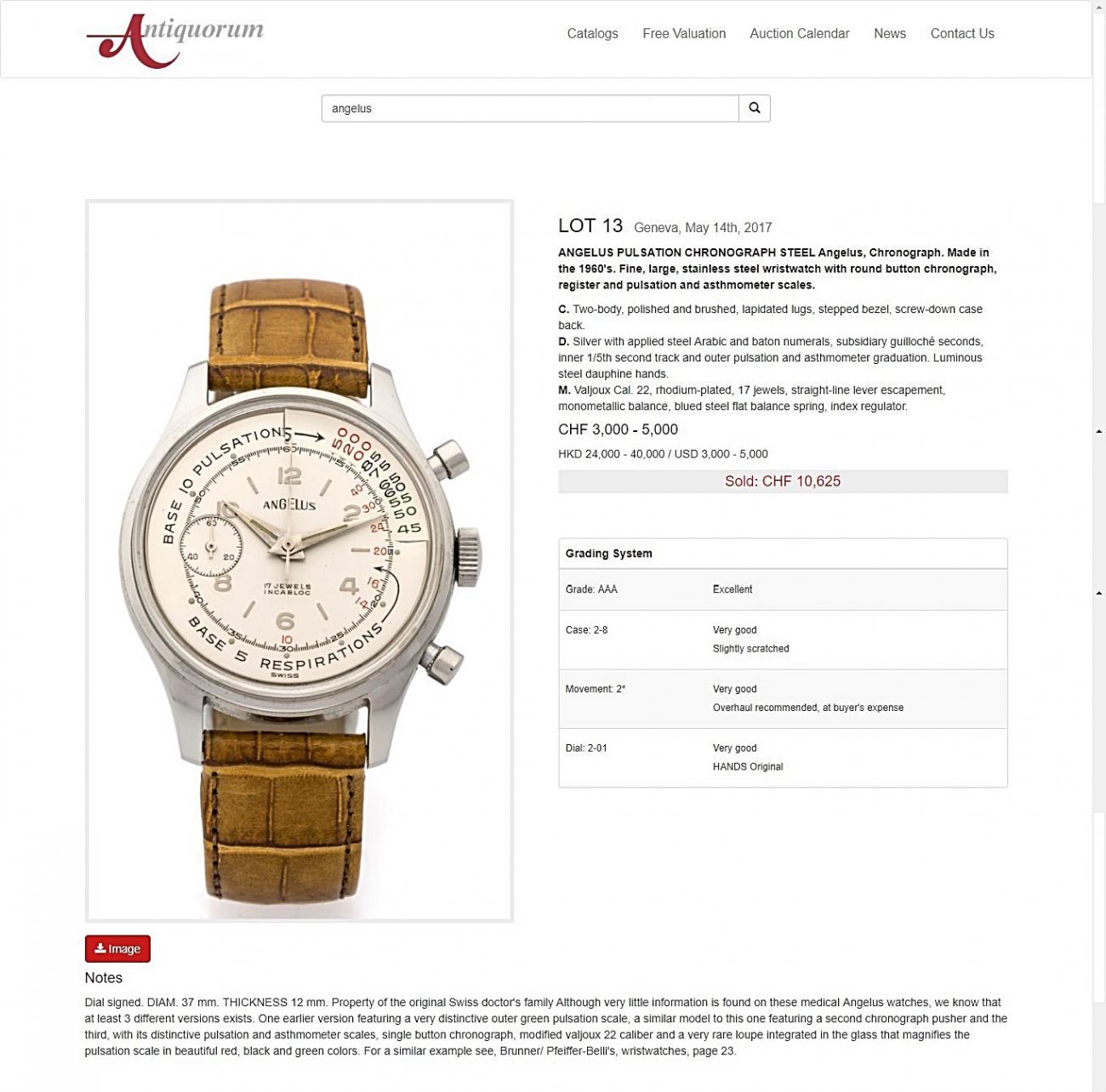 The cult-classic Angelus Chronodato in steel is quite difficult to find, but finding an Angelus Medical is even harder. Despite this fact, there is one currently available on Chrono24. The price is sent on request, but the seller turned my request down. The last mono-pusher Angelus Medical that I saw for sale maybe a year ago was with a US dealer, and it had an $11k price tag on it. I considered it a bit high, so I passed. When I found a 2017 auction and a corresponding price of CHF 10,625 for the two-pusher version, I realized that’s how high the price can easily go. I was quite disappointed when I realized that it would be hard to score a better deal. But keep an eye on low-profile auctions, and you might get lucky, as I did with my last purchase of 2021. Happy hunting!