Innovation and aviation at its best
Tomas Rosputinsky
comments 13
Share

So many Bulova Accutron watches up for grabs cause the effect that collectors tend to overlook them quickly. Even finer models such as the Bulova Accutron Astronaut. What a mistake! Well, a mistake you can avoid.

I made that mistake too. I have seen so many Accutron Spaceview models that it resulted in pushing it lower and lower on my wishlist. It was on the list for sure, but I failed multiple times to find a few hours to dig deeper into its story. All that changed one evening when I opened the History of a modern wrist watch book by Pieter Doensen on a page that featured the copy of a tuning fork Swiss Patent 312290. 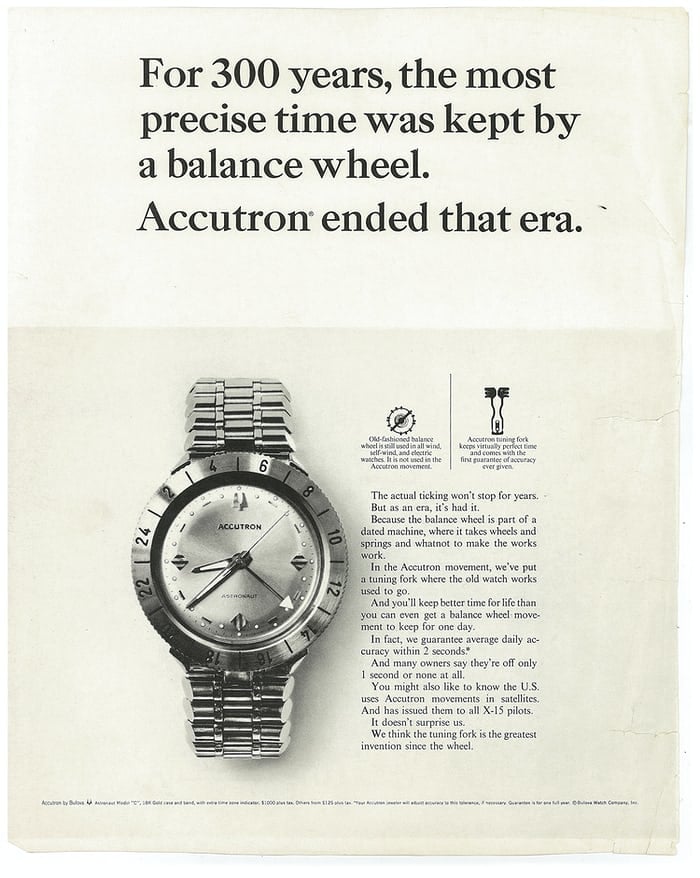 Why the Bulova Accutron matters

The low frequency of the balance wheel made it challenging to improve the accuracy of the mechanical watches. The race for the first electric watch was in full swing after WWII with Hamilton grabbing first place. It took only three years before Bulova introduced the Accutron in 1960. „For 300 years the most precise time was kept by a balance wheel. Accutron ended that era,“ says a headline across half the entire page promoting the new Bulova Accutron. The Bulova Accutron print ad from 1963 sells the „Astronaut as so accurate and versatile that it makes even the finest watches – even electric watches – obsolete.“

It doesn’t tick. It hums.

The Hamilton 500 had a coil fixed on the balance. Accutron changed the principle and made the balance wheel redundant. It actually made more parts redundant. „Caliber 214 reduces the number of parts to a mere 27 of which only 12 were moving parts. By comparison, a self-winding watch at that time contained around 136 parts, 26 of them moving,“ explains Pieter Doensen. The accolade belongs to engineer Max Hetzel and his „core particle“ – a tuning fork that is driven by the transistorized electronic circuit. The Accutron Astronaut vibrates with a frequency of 360 oscillations per second. It doesn’t tick. It hums. And it‘s audible even after 60 years.

As described here, the ingenuity hides in the fact that the frequency standard itself is also the motive force of the movement. The vibrating arm of the 25 millimeters long tuning fork oscillates the attached pawl back and forth and the pawl advances a micro-toothed wheel tooth by tooth. A second pawl anchored to the ebauche serves as a ratchet to prevent the drive wheel from revolving backward.

Oh, this gets us to the drive wheel itself, which is a piece of an astonishing micro-engineering. If you read carefully so far, you’ll remember that the fork is just 25 millimeters in length. Now imagine that the pawl has to fit precisely into one of 300 teeth that are sharpened on a wheel that is not even 3mm in diameter and half that millimeter in thickness. Each tooth is as tiny as 1/100mm and none of them are visible without a magnifying glass. Now you can understand why Accutron is a delicate piece to service and why watchmakers don’t usually start dancing if you bring it to their bench. 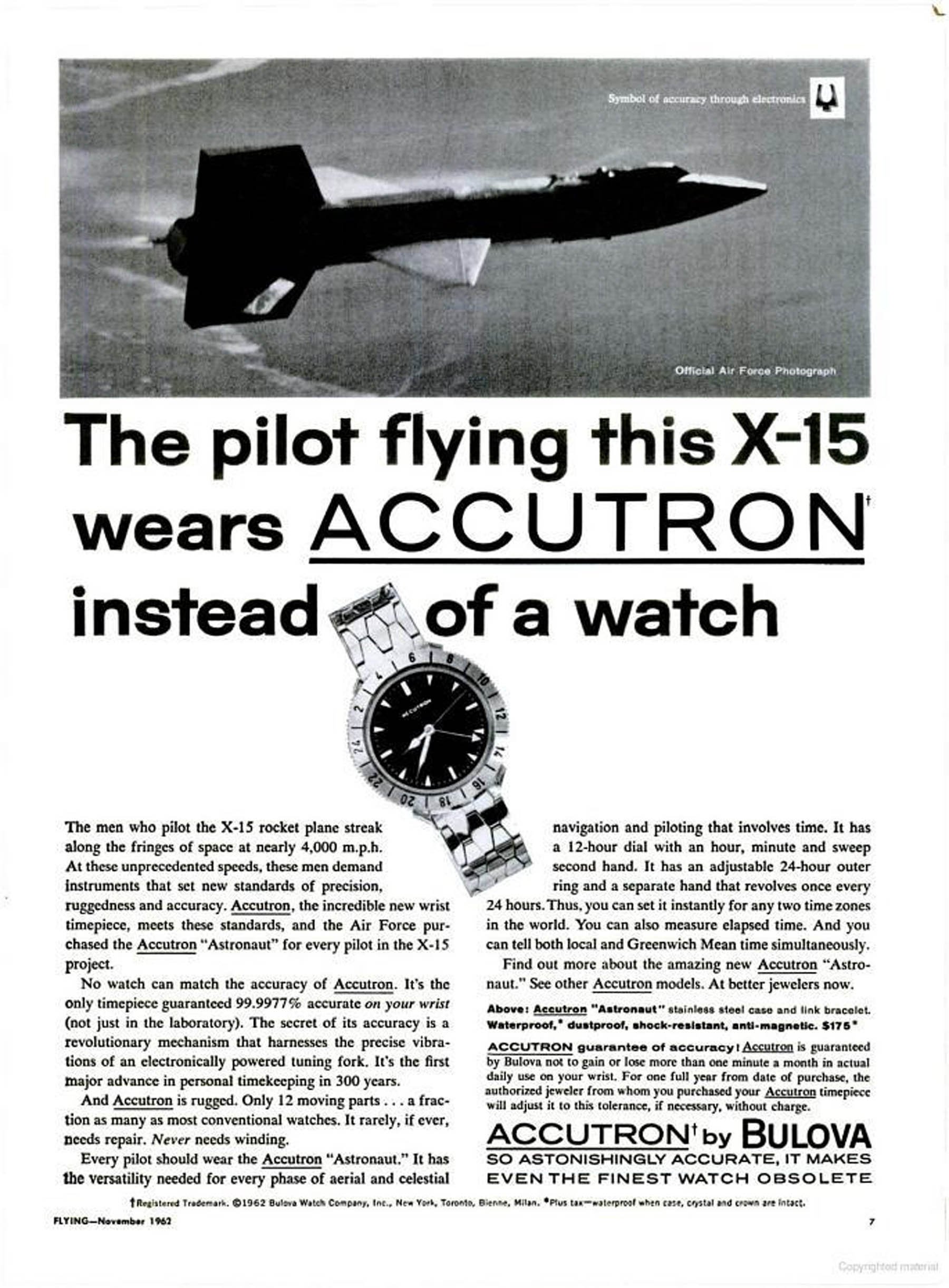 From the wide range of Bulova Accutron watches, there is one that stands out by far for me. It‘s the Accutron Astronaut. It’s not only because of its design, but also the fact that the U.S. Air Force purchased an Accutron Astronaut for every pilot in the X-15 project. The X-15 was a hypersonic rocket-powered aircraft developed to provide data on aerodynamics, structures, flight controls, and the physiological aspects of a high speed, high altitude flight. It was designed to be carried aloft and drop launched from under the wing of a B-52 mother ship. During the successful program that lasted almost ten years, there were 12 pilots that flew a total of 199 flights.

The choice of the Air Force was not random, so NASA followed suit. A lot of astronauts wore the Accutron early on in the manned space program, mainly because it could handle the G’s of liftoff better than any other watch. The Bulova Accutron Astronaut was also worn by CIA test pilots flying the A12, the first Mach 3+ capable aircraft, and also by astronaut Wally Schirra. It’s no surprise that the Accutron movements also found their purpose in the cockpits when powering instrument panel timers for manned space flights. 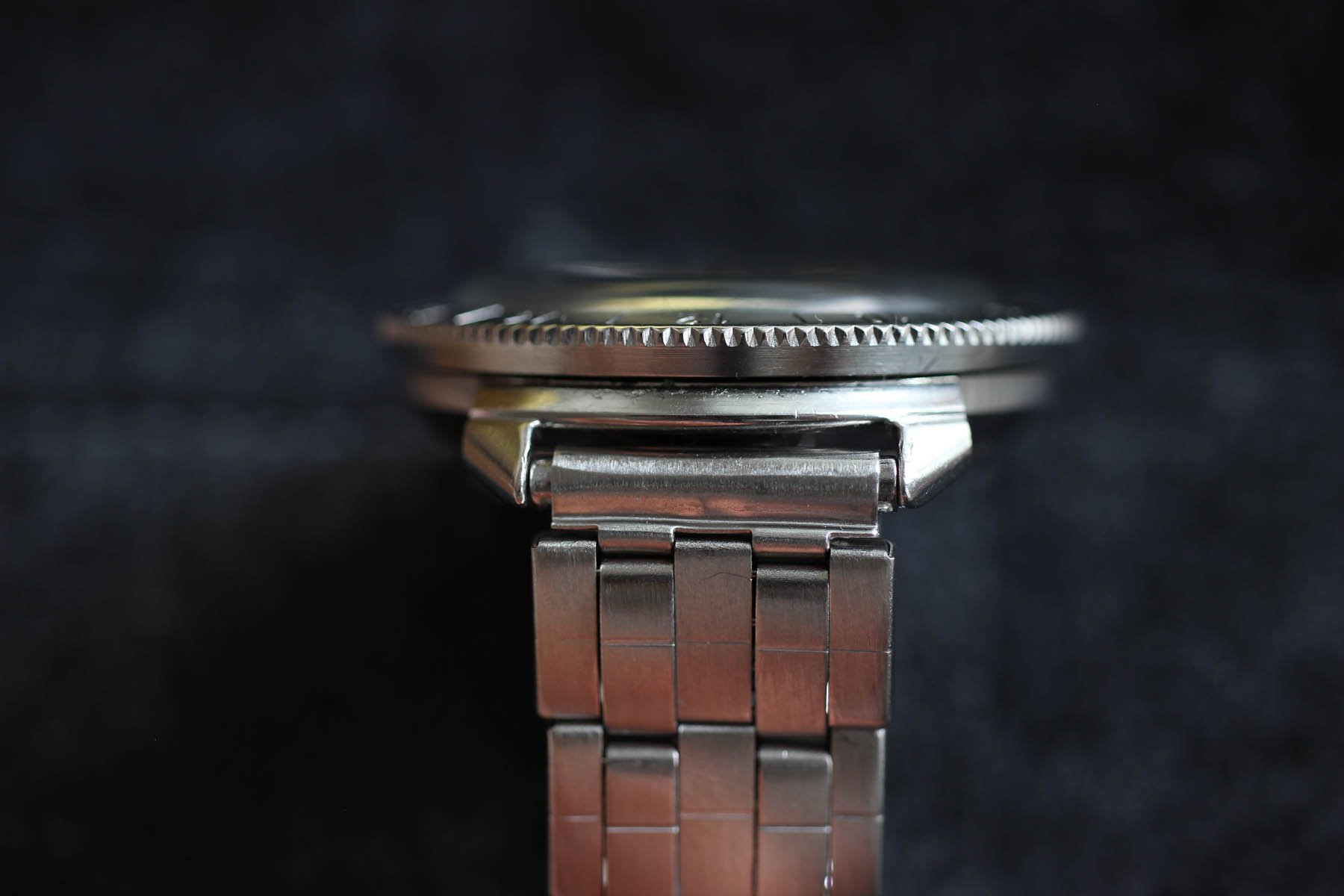 While the Accutron „Spaceview“ had quite a standard case but an unusual (or to be precise almost NO) dial, the Accutron Astronaut had a more traditional dial and eye-popping case. The excessive bezel helped to boost the diameter up to a solid 38mm that is solid even by today’s standards. The bezel itself is the pure form of utilitarianism. Simple and modern numbers, divided into blocks by straight lines. No colors or beverage references just polished steel at its best. 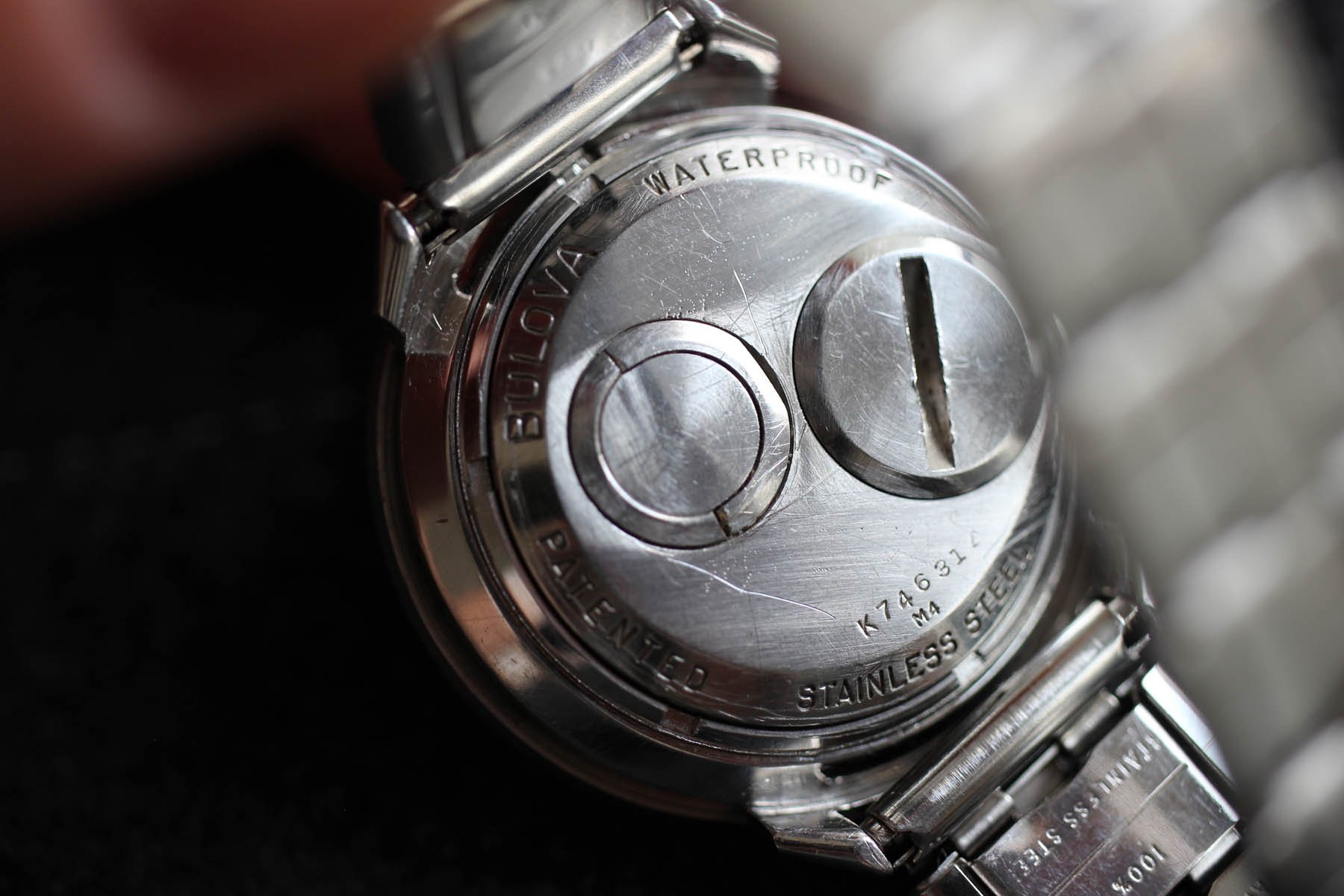 The lugs don’t stretch far from the case, they rather head down like strong pillars holding the lunar module steady. They look modern and minimalistic, yet if you look closer, you can recognize the cult spider lugs shape in it. If you turn the Astronaut bottom up, you can instantly feel like you are looking at the landing gear. There is no crown on the side of the case. The battery lid is integrated into the case back, just like the time setting handle you need to raise from its sunk position. Setting the time feels like you are trying to open a massive door to invade a spaceship. 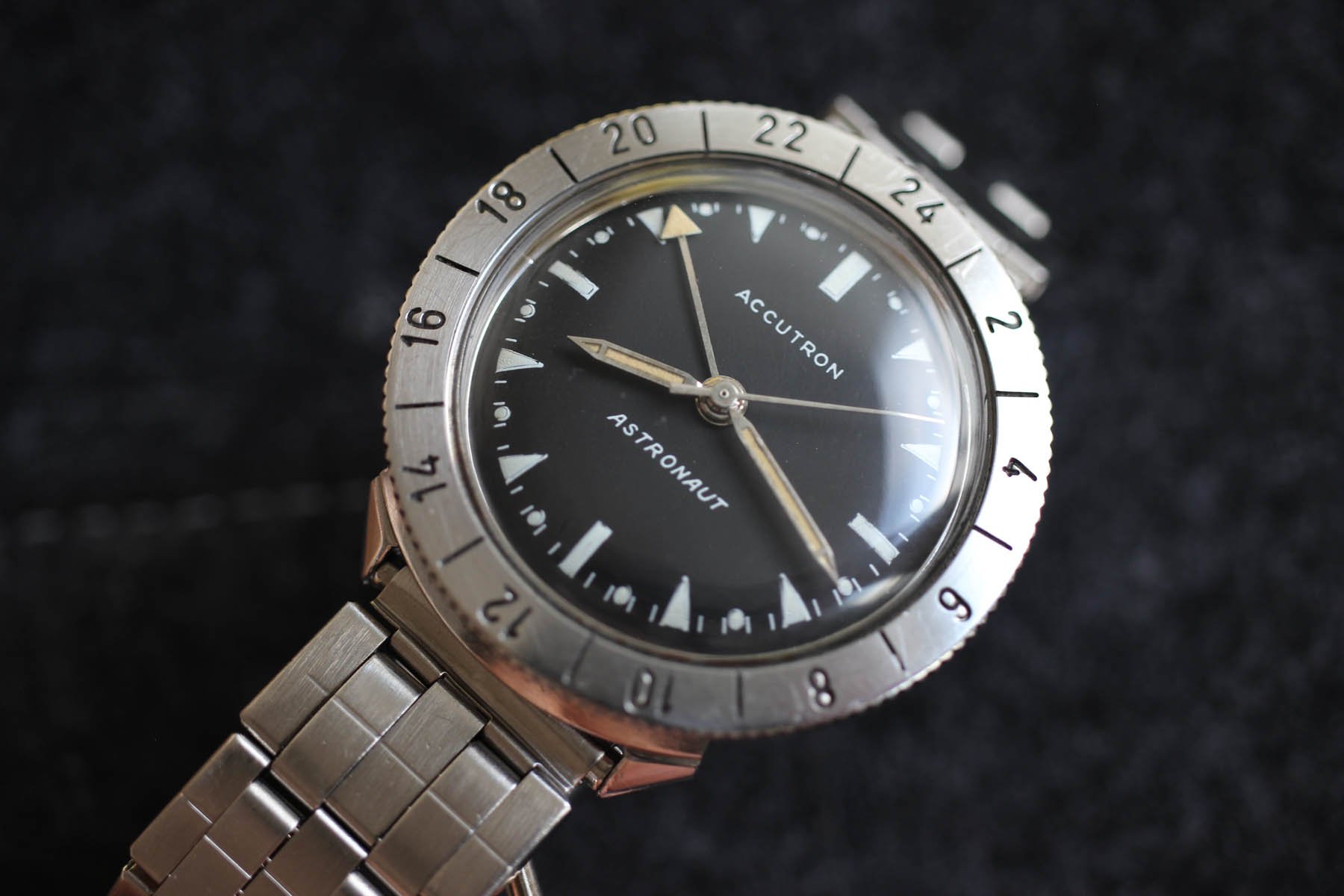 The dial on the Bulova Accutron Astronaut

It took me some time to decode what I like so much about the dial. I already mentioned the minimal bezel typo. The same applies to the Accutron and Astronaut signs. They are both written in the simplest technical writing that reminds me of technical drawings my father used to have all around his table when I was a kid.

Another dial specialty is the lume dots sitting in the middle of hour indexes. Usually, there is just an extra GMT hand and a rotating bezel to read the second time zone. The lume dots mimic the position of odd bezel numbers on the dial and thus allow for easier time reading. A triangle, dot, and rectangle sitting so close to each other sounds like a bad idea, but in reality, it looks natural.

No leather for an Astronaut

The Accutron Astronaut is the type of watch that looks much better on a bracelet. Leather doesn’t fit it at all in my opinion. I picked up my Astronaut in an auction in England and it came on an aftermarket stretch bracelet. I liked the honest watch condition and plan to source a bracelet later. Which one? There are two options I like the most, the original JB Champion „Bullet“ style or the Kreisler „Coffin“ style bracelet. 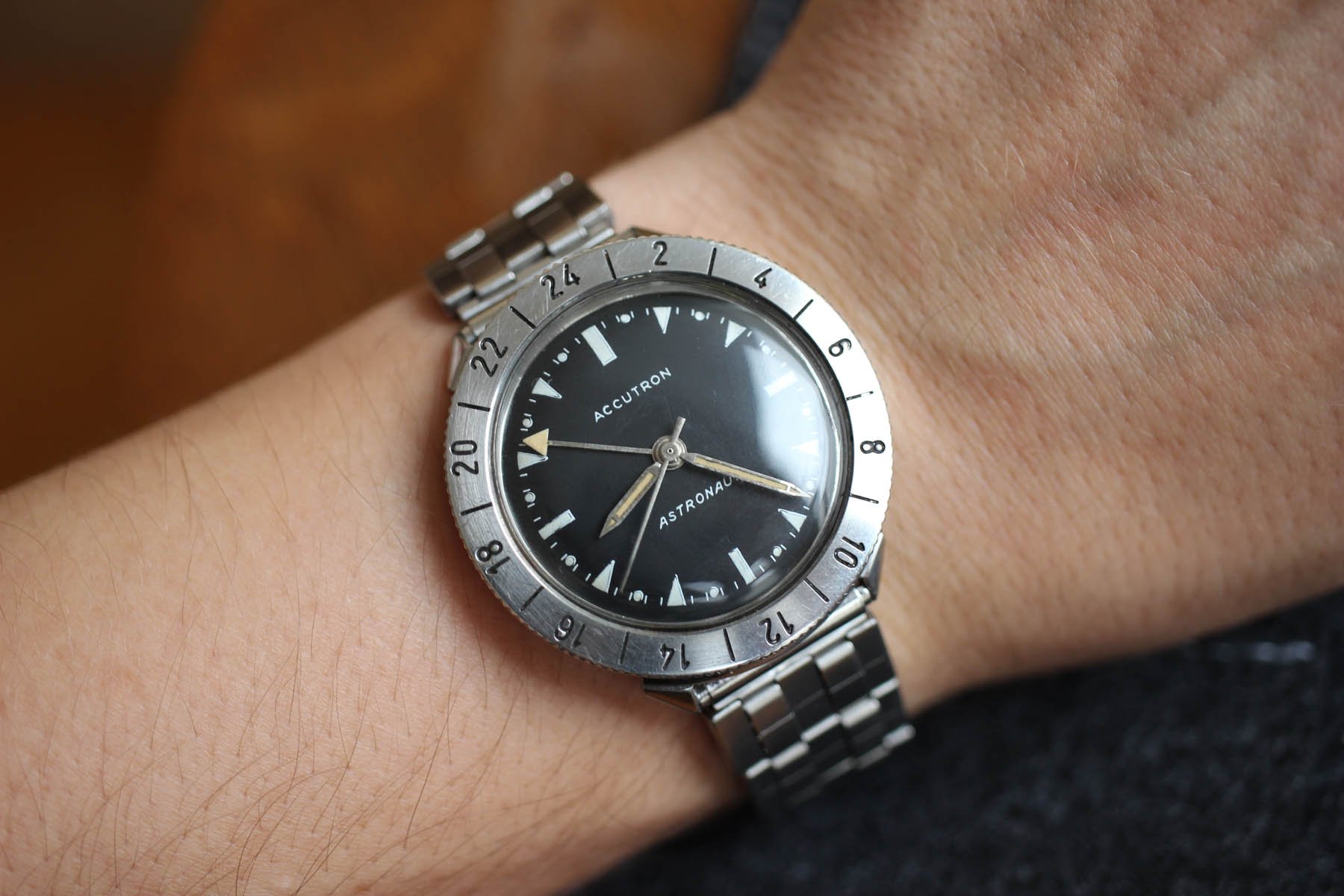 The Accutron „Spaceview“ is easier to get than the Accutron Astronaut. There were many dial, hands, and bezel variations of the Astronaut, but I recommend not being picky if you find a solid piece. The prices vary from lucky finds valued at €400, up to €2,000 for rarer versions coming as a full set. You might think you‘ll mind the high-frequency humming, but the constant flow of the second hand will get under your skin. Or cuff… Don’t be surprised if the Bulova Accutron Astronaut becomes one of your unexpected wrist-proteges. Happy hunting.