Today, on #TBT, we’ll continue to expose vintage Citizen as a real opportunity for collectors. This time, though, we‘ll step away from tool watches such as divers or chronographs and go the classy route with a look at a dress watch. The 1960’s Citizen Chrono Master is a watch worth discussing, especially if well-built precision Japanese watches are of interest. 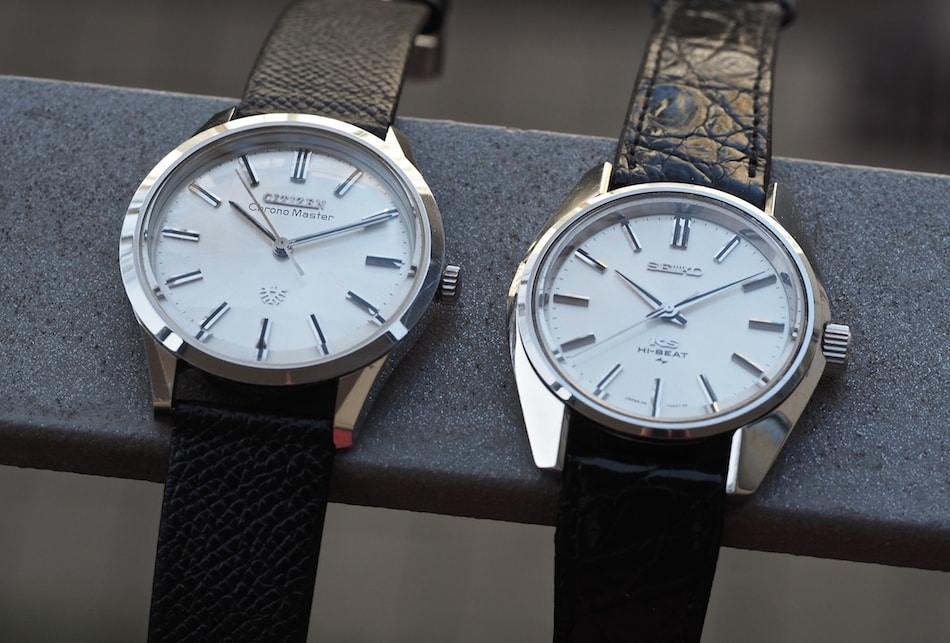 Every time we discuss Citizen, it’s impossible not to mention the brand’s arch-rival: Seiko. The two companies went tit for tat during the 1960’s and 70’s to the point that some of the watches are indiscernible from 5-10 meters of distance. Harken back to our article on the Citizen Uni, a light diver from the 1960s, that’s so close in looks and specs to the Seiko Silver Wave that it’s scary. Today’s Citizen Chrono Master is yet another situation of the two brands going neck and neck because the Chrono Master line is most definitely Citizen’s answer to King and/or Grand Seiko. 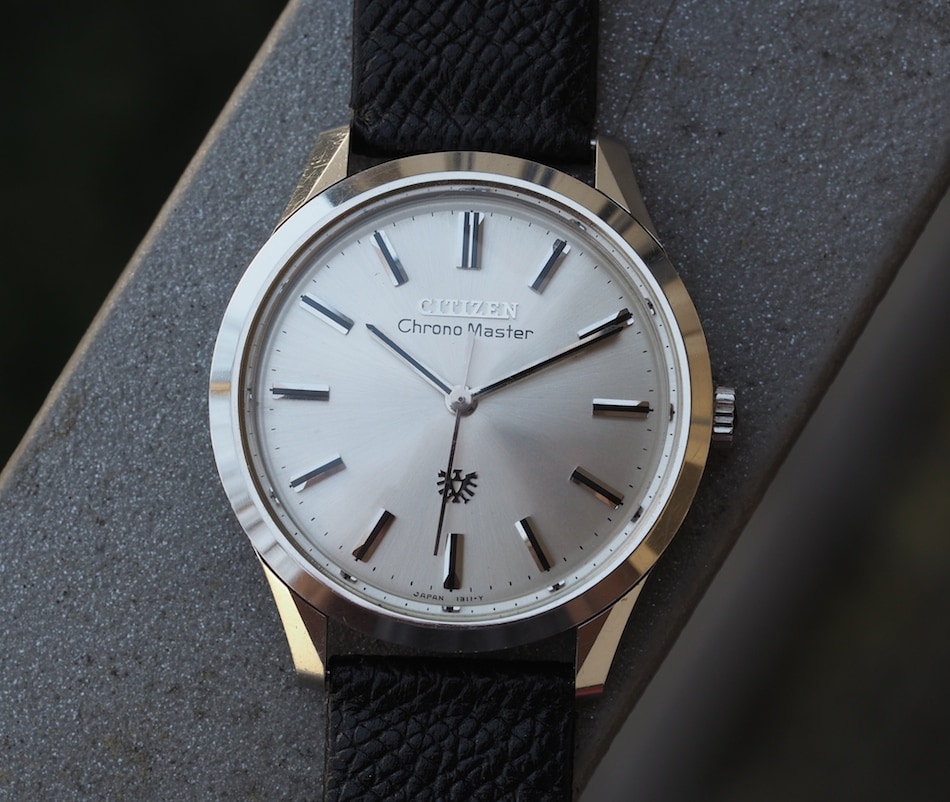 As always, researching vintage Citizen is a bit of a challenge. Old forum sales ads, WRUW postings and Instagram often provide most of the detail that’s available in English, so that makes for tough sledding. Thankfully, there are a couple enthusiastic sites out there that do their best to detail these lovely watches and I have to thank the Sweep Hand site for their info on the Citizen Chrono Master. 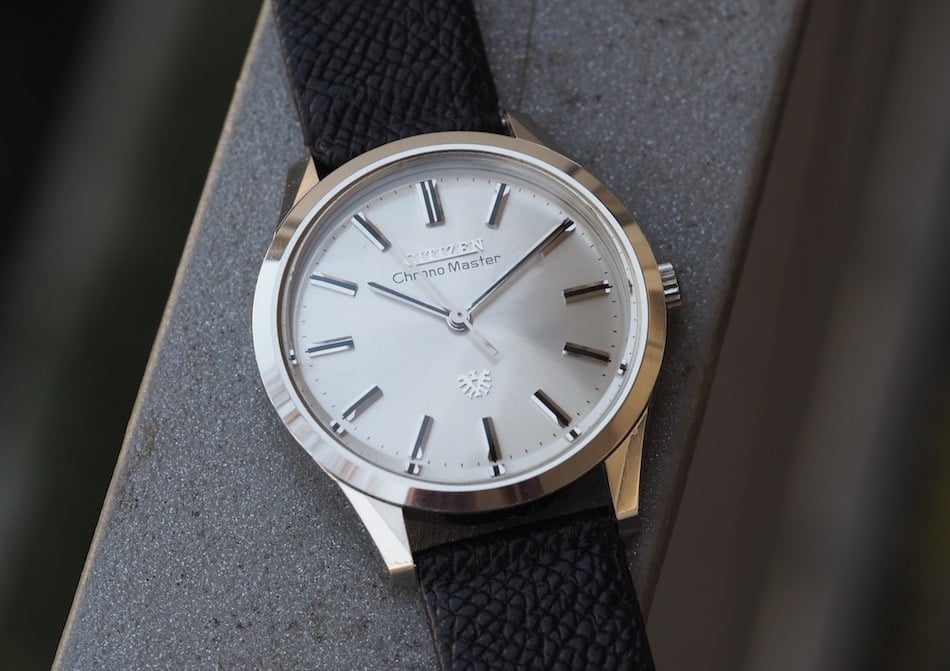 From what I can see from the site referenced above and from piecing together other patches of information, the Citizen Chrono Master line was introduced in 1967. While today’s piece is from 1968, it is, in fact, an example of the first Chrono Master that was released. Listed as reference H00S-3002-Y, the model is interesting because, despite its name, it’s not a chronometer rated watch. Strangely, the brand offered a nearly identical, but pricier, version with the COSC specification that adds “Chronometer” to the dial. Still, it’s lovely and as we get into the detail, we’ll see that the Citizen is a worthy rival to Seiko’s offerings, but that it does fall a bit short overall. 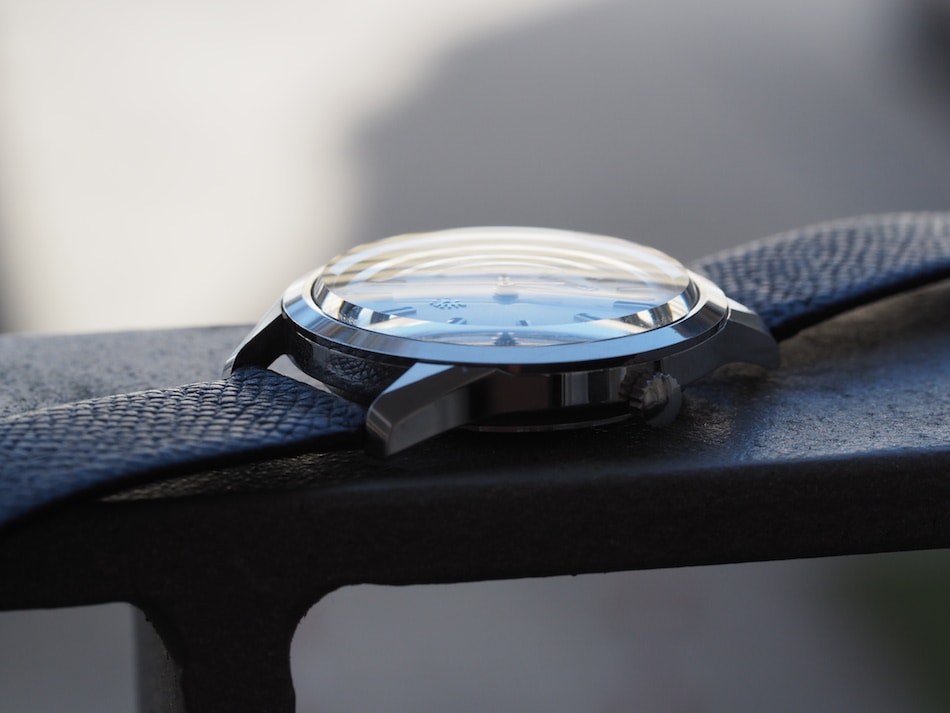 At first glance, the Citizen Chrono Master comes off as an attractive enough dress watch, but I wouldn’t fault anyone for passing it off as somewhat anonymous. As is the case for so many vintage Japanese watches, it’s the details that truly count and this is where the Citizen scores. With a stainless steel case of nearly 37mm (lug to lug is 48mm) and a lug width of 18mm, the Citizen sits right in the sweet spot of highly wearable dress watches that are large enough to please most modern wearers. The watch features a thick, bevelled mineral glass crystal that brings its thickness up to 12.5mm. Again, it’s a comfortable watch that has no issue in fitting underneath a shirtsleeve. 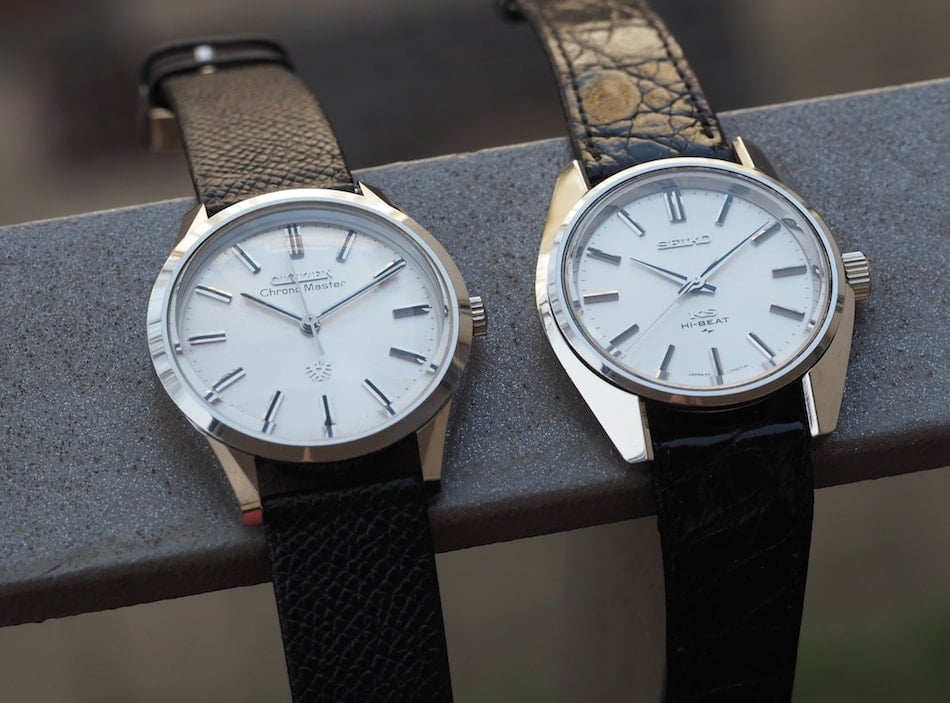 Let’s spend a second on the case design of the Citizen Chrono Master. If anything, it’s notable for not being notable and that likely explains a little of why Citizens of this ilk lag their Seiko counterparts in terms of popularity and value. Whereas Seiko either made a big deal (or, likely, has since made a big deal) about its so-called “Grammar of Design” styling language, Citizens were designed far more pragmatically. I wouldn’t quite call them “me too” designs as there is some nice twisting to the lugs and the polishing is of a high level, but there’s no doubt that they lack the finery and detailing found on Grand or even King Seiko’s. While this model has an unsigned crown – it’s correct – later models only received a normal “CTZ” version. It’s as if Citizen was a bit unsure of going whole-hog into the Chrono Master line, didn’t quite have the resources, or felt their efforts were good enough. Whatever the case, this is a lovely watch, but it’s simply not quite as distinctive as the upscale Seiko’s of the time. 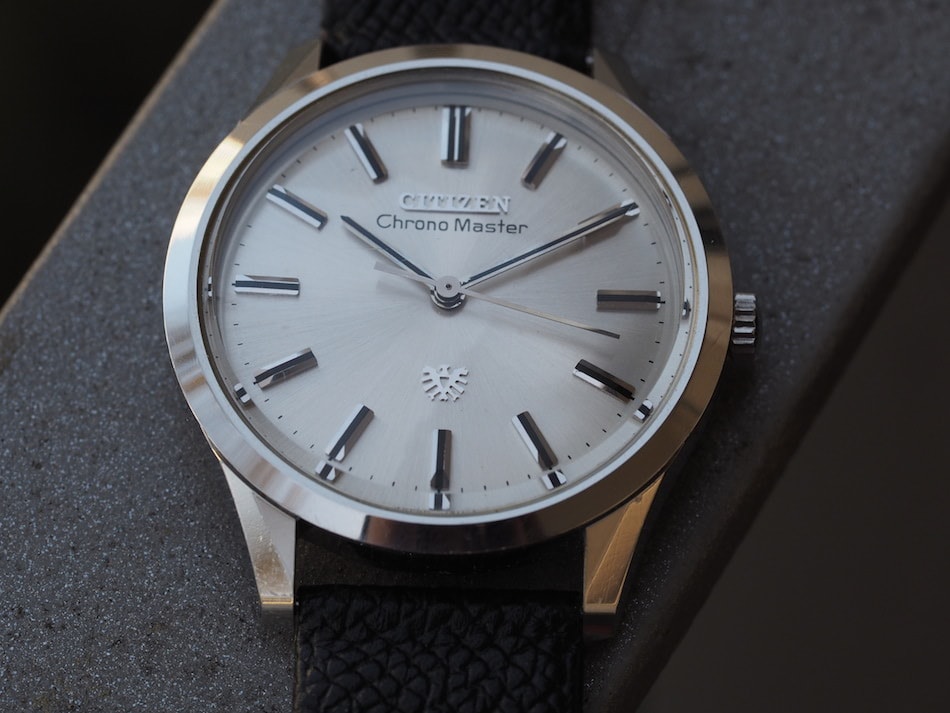 Going more deeply, the Citizen Chrono Master employs a silvery white dial with little ornamentation. The Citizen logo is applied, as is an eagle above 6:00. Under a loupe, these accoutrements, along with the applied hour markers show a high level of precision that comes in just below the quality level of Seiko. That being said, the Citizen is wonderfully executed and bests much of the mainstream Swiss stuff from the era. Returning to the hands and hour markers, and then comparing the watch to its competitor, the King Seiko 45-7001, it’s absolutely impossible not to notice the nearly identical design traits. The black inlays on the hands and markers are stylistically similar as are the applied logos; even the printed black hash marks for the minute track are alike. 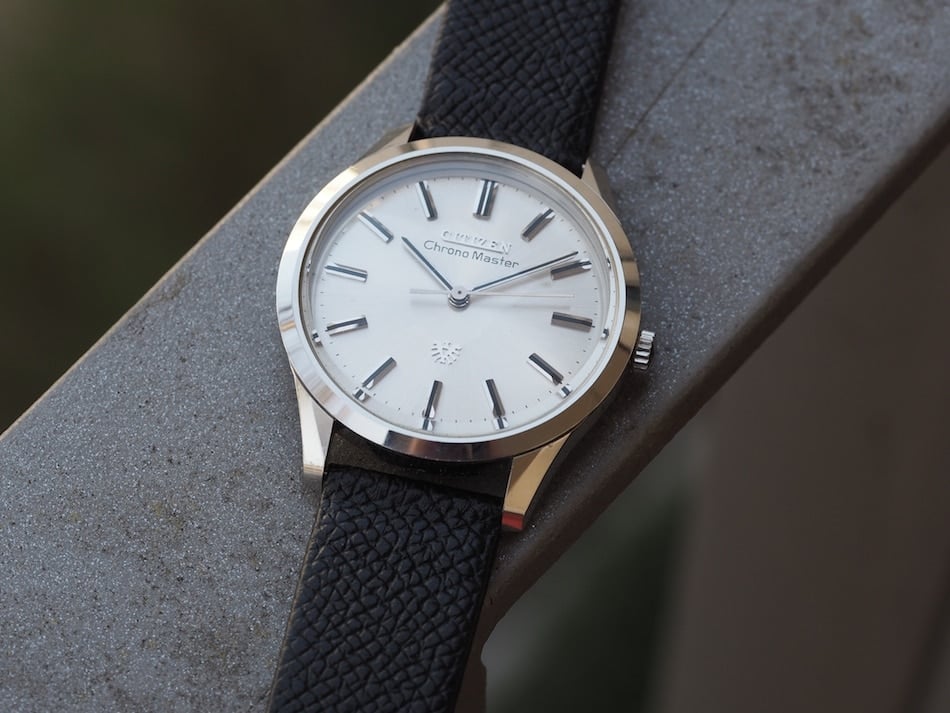 Inside this Citizen Chrono Master, we find the 0920 caliber, which is a manual wind (yay!), 22-jewel movement that beats at a leisurely 18,000 bph. It keeps great time, but it’s really nothing special versus the hi-beat movements from Seiko that were released soon after. Still, the movements were apparently finished and adjusted to a higher standard versus other Citizens that used this longstanding caliber. It’s a smooth movement to wind and definitely provides that sense of daily interaction with one’s watch. 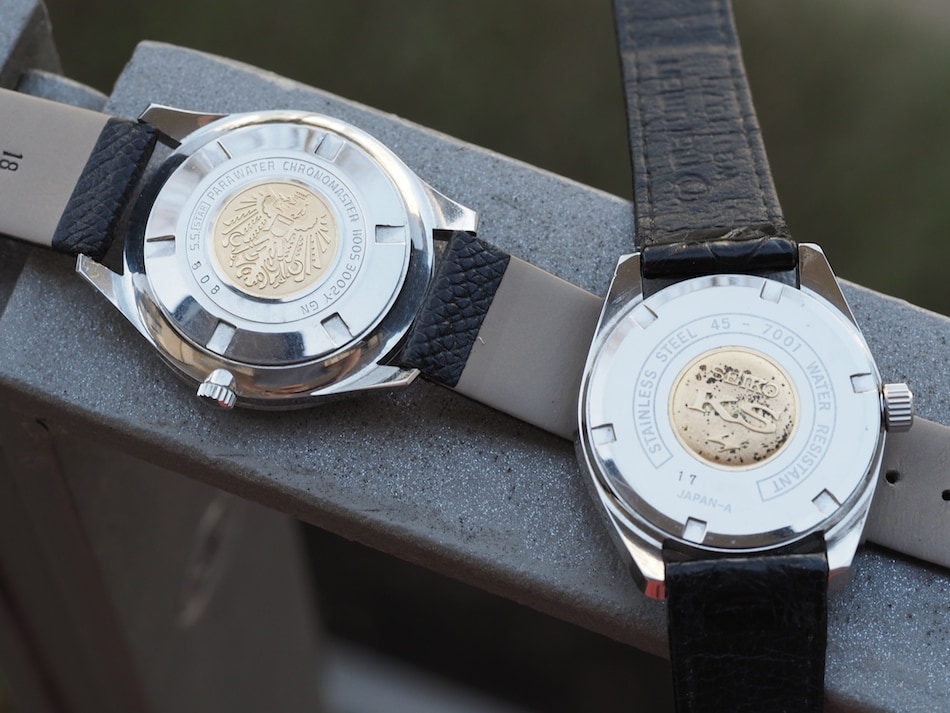 Flipping the Citizen Chrono Master over reveals what might be its most charming characteristic. Yes, much like Seiko, Citizen chose to adorn some of its case backs with an intricate gold logo. In fact, this is probably the one area where Citizen firmly has Seiko beat in terms of execution – you can see the two side by side above. You can see this eagle of sorts on the Chrono Master that, admittedly, looks a bit like the German coat of arms, but it is really a neat feature that lets you know you’re dealing with something special – or at least Citizen thought so! 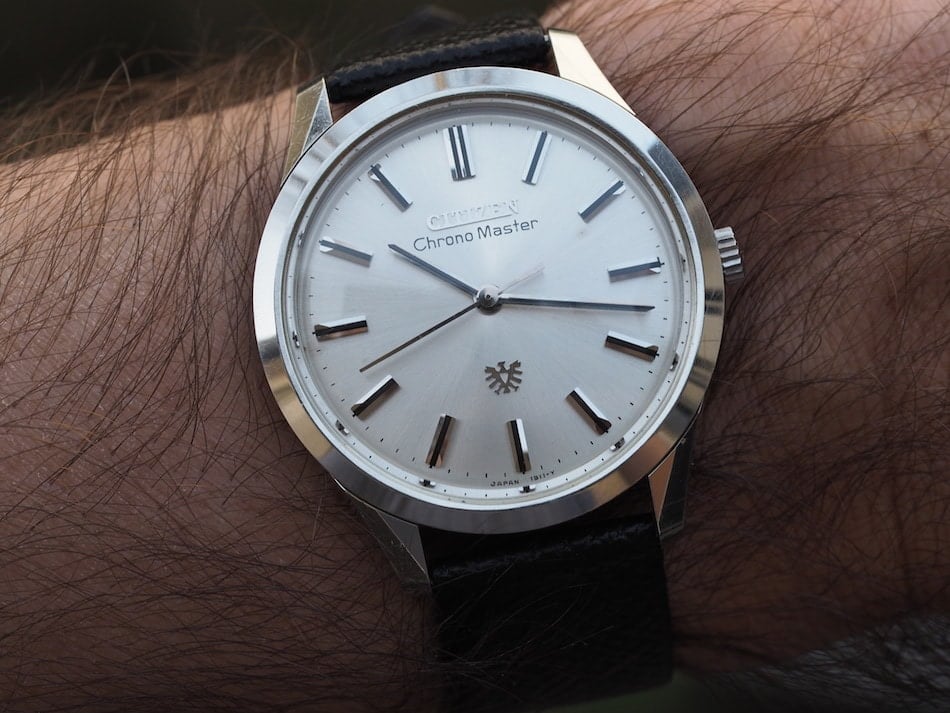 I came upon this Citizen Chrono Master purely by mistake. Literally, a friend shipped the watch along with some other pieces I purchased and it was meant to ship to someone else! I knew who was supposed to receive and I contacted him to ask if he was interested in selling it – and the answer was yes. Chrono Masters such as these have slowly started to catch on, but they’re still largely collected by those who are deeply into either Citizen or vintage Japanese watches in general. Plus, most are still in Japan, so they don’t show up on Western forums frequently. Versus a nice King Seiko that might sell for somewhere around $700 or more, a Chrono Master such as this one is a relatively bargain in the $300-400 range. This one is in the kind of condition that speaks of very light wear if any. As per normal with watches of this age, check for water ingress and that all the cosmetic parts are original. Service wise, I’d assume they’re relatively simple to fix and 0920 caliber movements should be easy to find in lesser donor watches. All in all, this should make for an easy piece to live with. 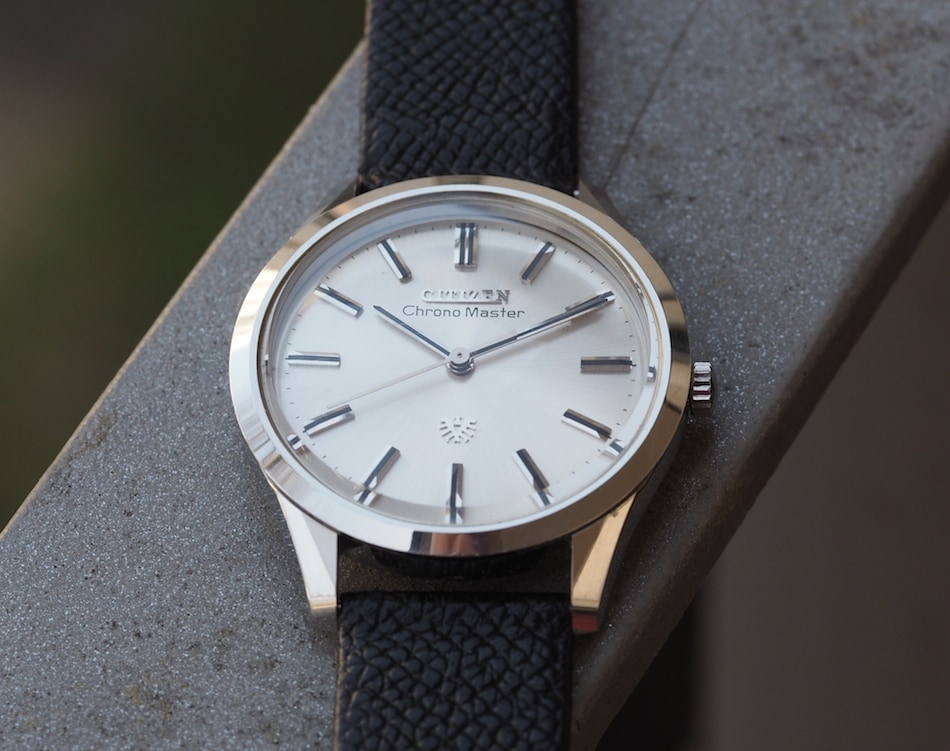 As mentioned, the Citizen Chrono Master might not strike you as unique as a King Seiko, but it is a beautifully crafted watch with some well-executed details. As I also referenced, a piece like this easily keeps pace with any of the big Swiss brands from the period when considering the finishing and overall package. Stay tuned, our coverage of vintage Citizen has only just begun.