It was one of those normal Saturday afternoons. You know, the kind where you’re fiercely duking it out with another bidder who likely hails from a country across the world. It’s likely that anonymous foe and I couldn’t even communicate using the spoken word, but yet, there we were, raising our bids in stupidly small Japanese Yen-based increments, thereby extending the auction each time by a set number of minutes until the thing went roughly an hour past its scheduled end mark. He (I’ll take a guess that it was a “he”) had likely pissed off his better half, if he had one – we’re watch nerds remember, because it was easily 10pm in Japan extending towards 11. Me? I was on the way to sending my wife off the deep end for deepening what was already a far-too-dedicated love affair with my phone. And then, because nothing happens without the help of the Intermediary (you may remember him for finding a Universal Geneve Nina Rindt at what could only be defined as a Wal-Mart Rollback price), I had his help in placing bids and then waiting for him to painfully inform me that my combatant had raised by something like $5 to extend the pain. In the end, I finally struck the decisive blow (maybe I raised by a stunning $7 and threw him into chaos) and leveled the other skilled, or dorky, warrior and won the damn thing. For sure, by now, you’re asking, what in the hell was the focus of this interminable battle? Well, it was a duel for a very minty vintage Citizen 2812-Y Seven Star Diver from 1968. But of course it was… 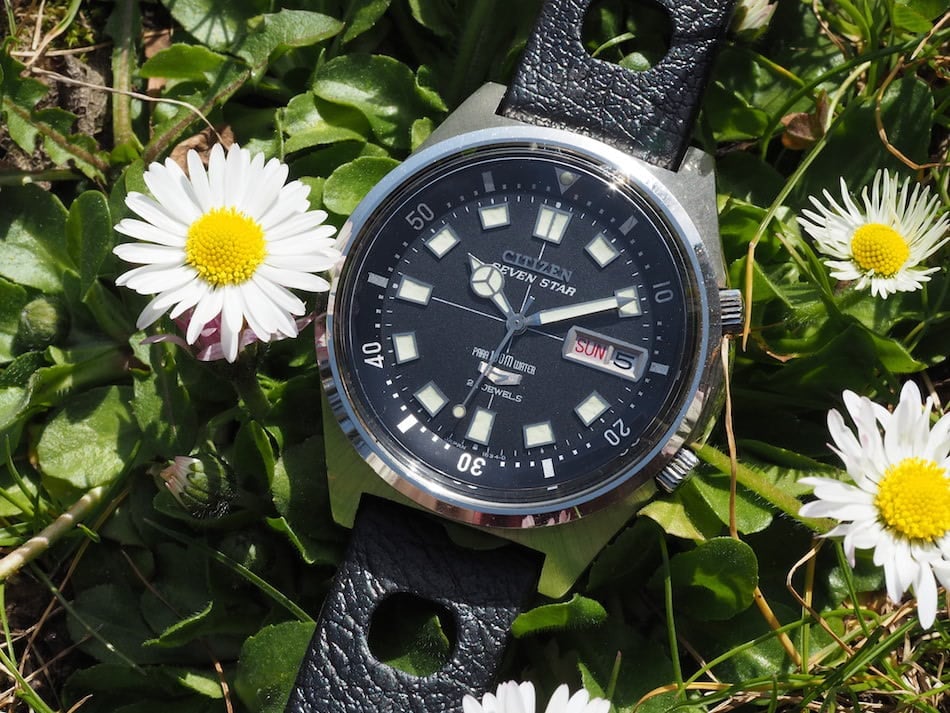 For me, vintage Citizen is currently a little like discovering watches all over again. There’s a heck of a lot to learn -like Seiko or any other brand for that matter – Citizen is its own universe, and it’s incredibly under the radar – for now. Sure, the novel feeling will wear off, but I’m still in discovery mode and despite my tendency to try and absorb as much info in as little time as possible, I’m doing my best to spread this joy out for the long haul. 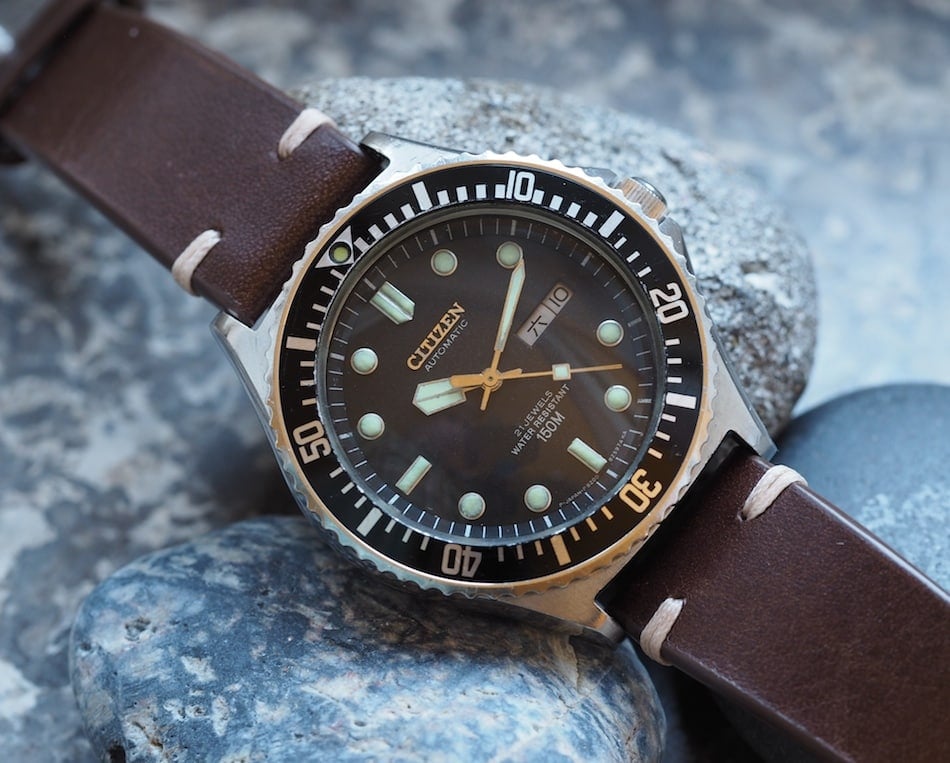 Yes, I’ve mentioned in a prior article on the 51-2273 diver that gathering info on vintage Citizen is exponentially more difficult than in the case of Seiko because it seems that the brand just didn’t make it out of Japan in numbers until much, much later. But, that’s not the reason that I’m taking my gathering of Citizens slowly. It’s actually for a far sadder reason: I’m running out of new things to discover in general that typically appeal to my 60’s-70’s sport watch tastes. But, the Citizen 2812-Y Seven Star Diver was a watch that I simply had to have. 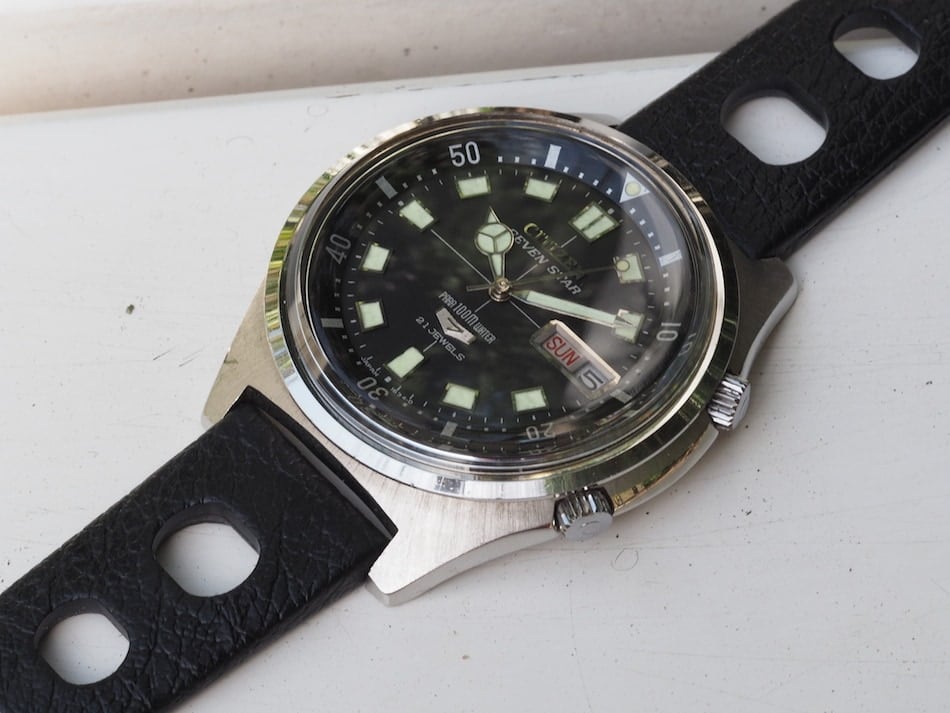 A quick glance at the Citizen 2812-Y Seven Star Diver reveals a twin-crown watch that could potentially be mistaken for one of the many Super Compressors made during the 60’s. Of course, the Compressor designation refers to a case design that compresses to increase water resistance and the Citizen simply mimics the look. Yes, it has an internal dive timer bezel that’s operated by twisting the upper crown, but its method of sealing is via a normal screw-down case back. This, along with 2 non screw-down crowns, help create a watch that’s water resistant down to 100 meters. 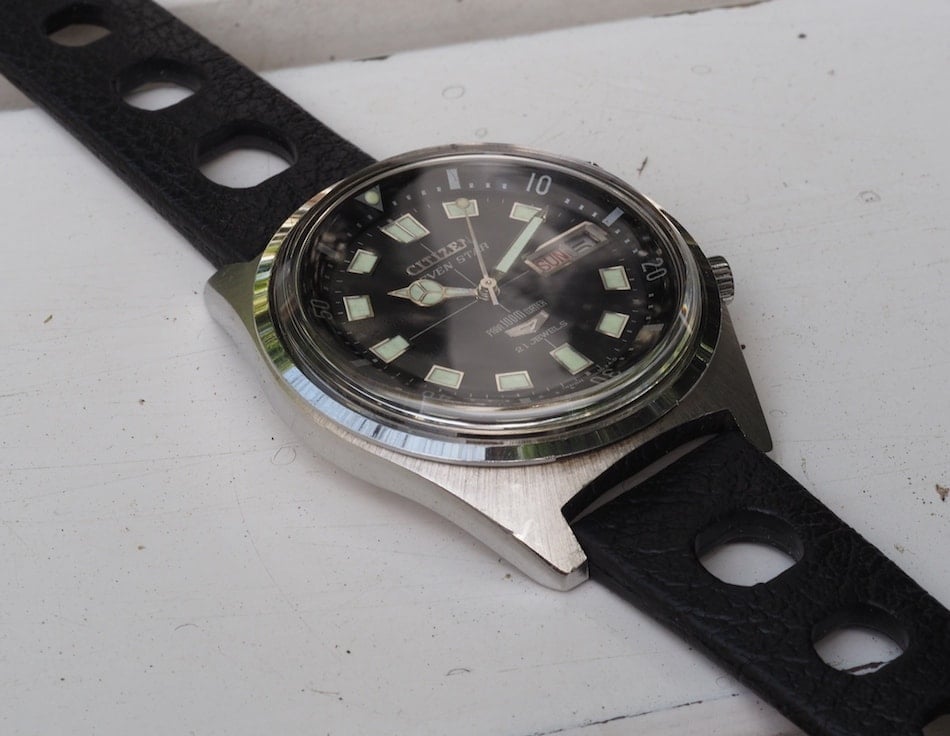 When examining the details of the Citizen 2812-Y Seven Star Diver, one can actually find some serious differences from the aforementioned eponymous Swiss divers of the day that make this far more than an easily written off Japanese copycat watch. The case design, in stainless steel, for example, could be described as an exaggerated take on the typical Aquastar design – or something close to the 62MAS. With blocky brushed lugs that flow straight out from the case and a squared-off area where the strap mounts, the case looks big and only enhances the size of a watch that comes in at nearly 44mm in diameter and 50mm from lug to lug. Yes, if small vintage divers are your concern, this just might be your watch. 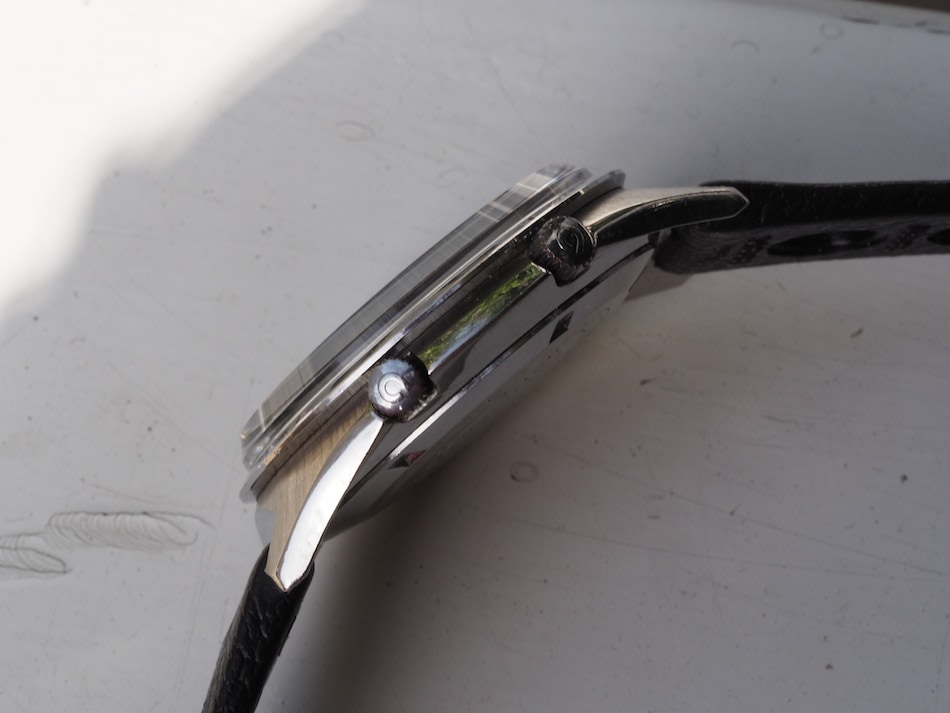 Then there’s the Chichen Itza of an acrylic crystal on the Citizen 2812-Y Seven Star Diver. Ok, that description is pushing it, but it contains a tall angled side that comes to the abrupt edge that forms the flat crystal surface. As I mentioned, it’s tall and it’s distinctive in a world of divers that primarily featured domes. 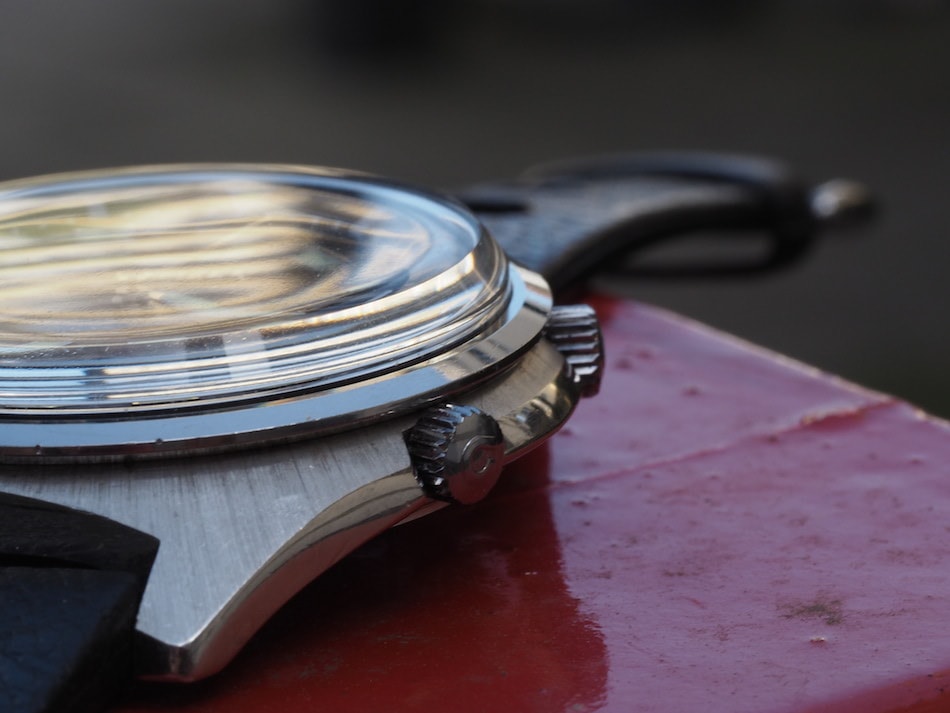 Another real highlight for me is the case section between the twin signed crowns. The case juts outward and is pinched in the middle to help form somewhat of a crown guard. It’s an odd contour that’s not repeated at all on the opposite side of the case. Again, it’s unique and not at all slab-sided like most relatively affordable watches. 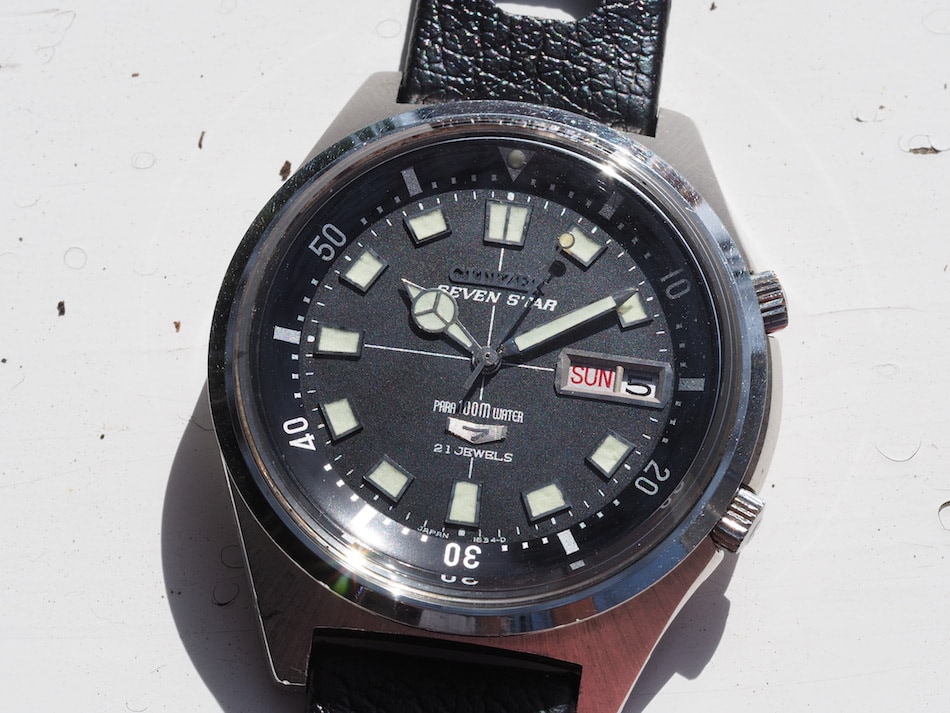 When looking at the dial of the Citizen 2812-Y Seven Star Diver, there’s a high level of legibility. In this version, the dial is matte black (there are silver, blue and even red versions – and an alternate reference called the 4-520343 Y), and it sits against a glossy black rotating inner bezel. The dial features a nice white cross hair that sprouts from the center of the dial and it runs into lume-filled trapezoidal applied markers. As is the case on so many Japanese watches, a day and date can be found and as is also the case on so many Japanese watches, it somehow works here. Yes, it gives the watch a bit of a geeky feel, but there’s so much real estate to work with that it flows well. 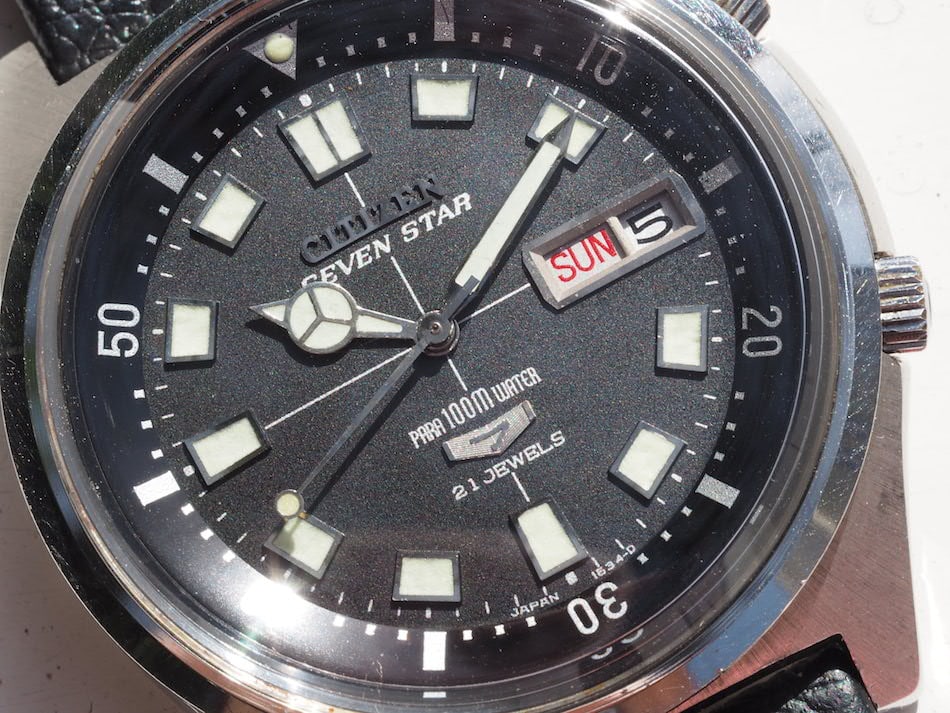 Quality wise, the printing looks great, as does the applied Citizen name and the shielded “7” that sits below the Para Water (the model family) name and depth rating. Regarding the hands, some models within this family use an hour hand that’s similar in shape to the minutes hand, but in this case we get a very “Rolexian” indicator complete with the lumed Mercedes motif. The sweep hand contains a lumed lollipop at its end. These hands, by the way, were found on many different Citizen divers. 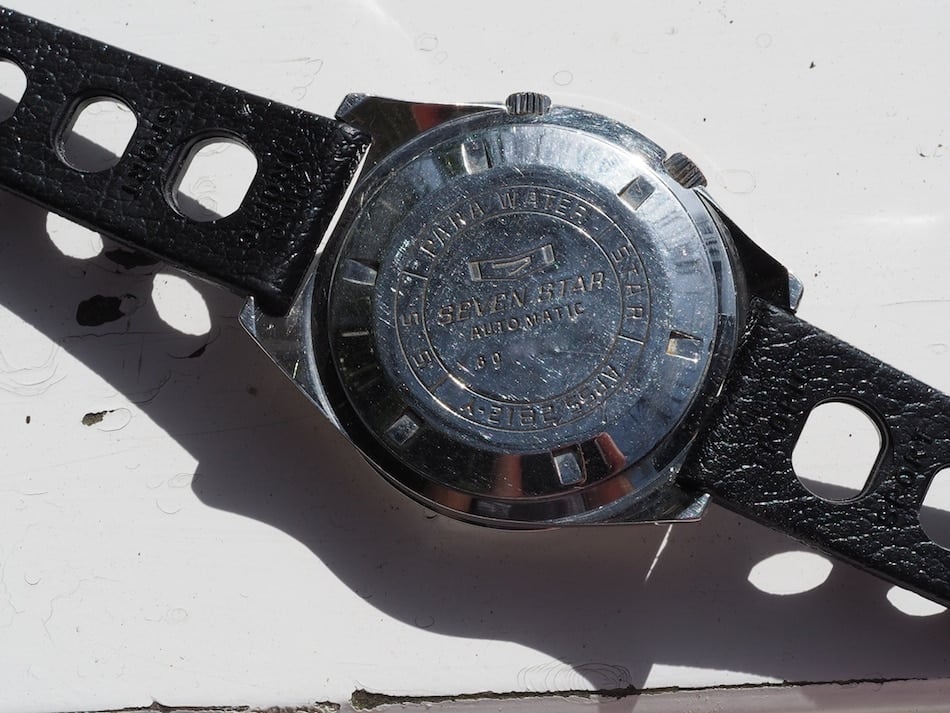 Inside the Citizen 2812-Y Seven Star Diver is the automatic 5270 caliber. It beats at a leisurely 18,000 bph, and can be hand wound. Both the day and the date are quickset via the lower crown simply by turning it either clockwise or in reverse once notch out from the case. My day wheel is unfortunately sticky, but everything else works perfectly as this watch looks like it saw very light duty. 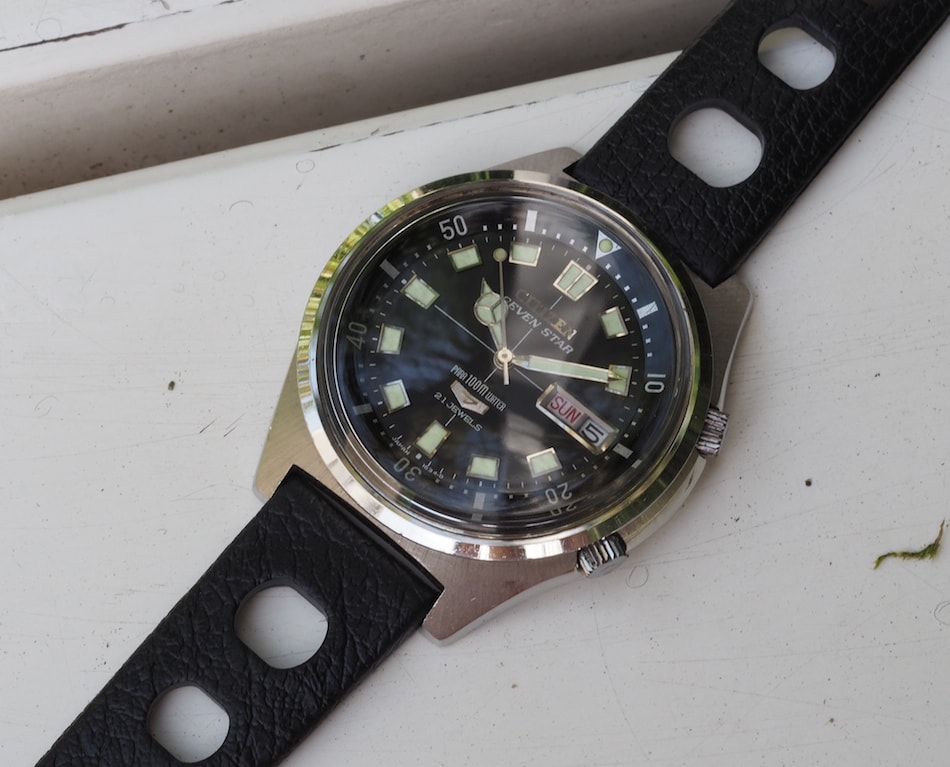 The Citizen 2812-Y Seven Star Diver and its sister reference comes up every so often on various auction sites. They’re relatively popular with Citizen collectors, but decent versions can still be had for around $400 – 650. I’d assume that cosmetic parts are relatively tough to track down, but the movements are certainly serviceable. A typical quibble I have with vintage Citizens are the seemingly thin chrome coatings they employed on their base metal crowns, but otherwise they seem to stand up well to the passage of time. This one, by the way, came on a funky Japanese rubber Bambi strap, but I’ve switched it out for a 20mm Tropic. Despite its large diameter, the watch is fairly slim at 12.5mm and works well, but packs presence on my smaller wrist. 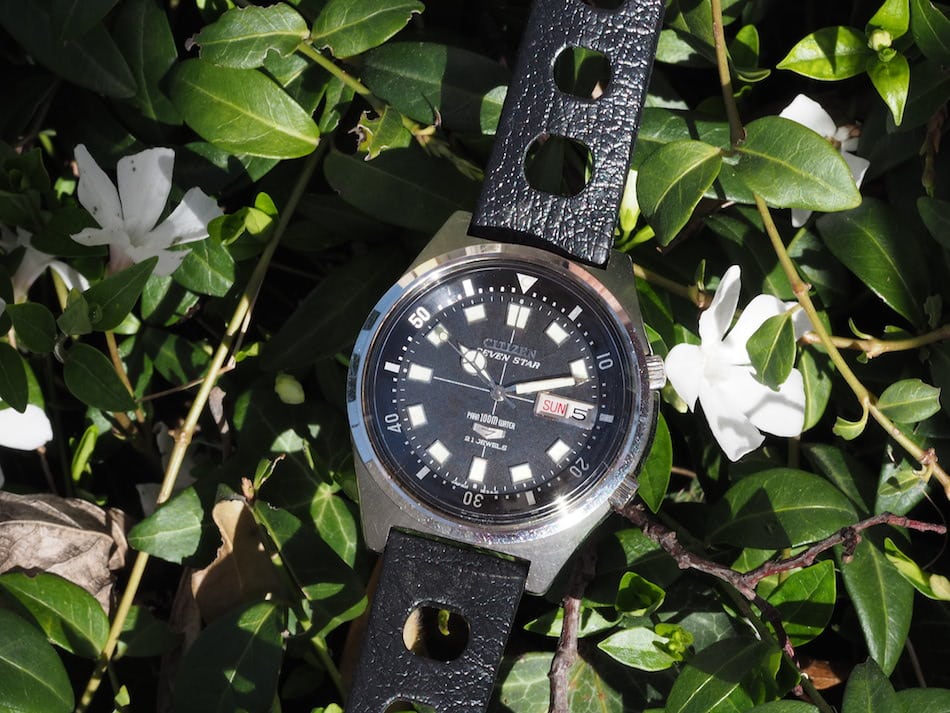 The Citizen 2812-Y Seven Star Diver is a worthy piece to add to any collection, especially when factoring in its price. It carried decent water resistance and some really nice modern features. Plus, its size makes it oddly different from most watches of its time. Yes, in the end, it was a watch worth winning – despite having to engage in weekend battle.