This week on #TBT, we take a look at the Citizen Seven Star Deluxe Diver, an elegant watch with a unique date display.

And we’re back with yet another vintage Citizen diver. If you’ve been hanging around these parts for the last year or so, you’ve likely noticed that I continue to add these to my collection. Yes, I’m on a relaxed journey to create a nice hands-on library of pieces from the 1960s and ’70s to sit alongside my more complete Seiko grouping. I love to compare and contrast within the brand, but also to see how these two brands stack up against each other. 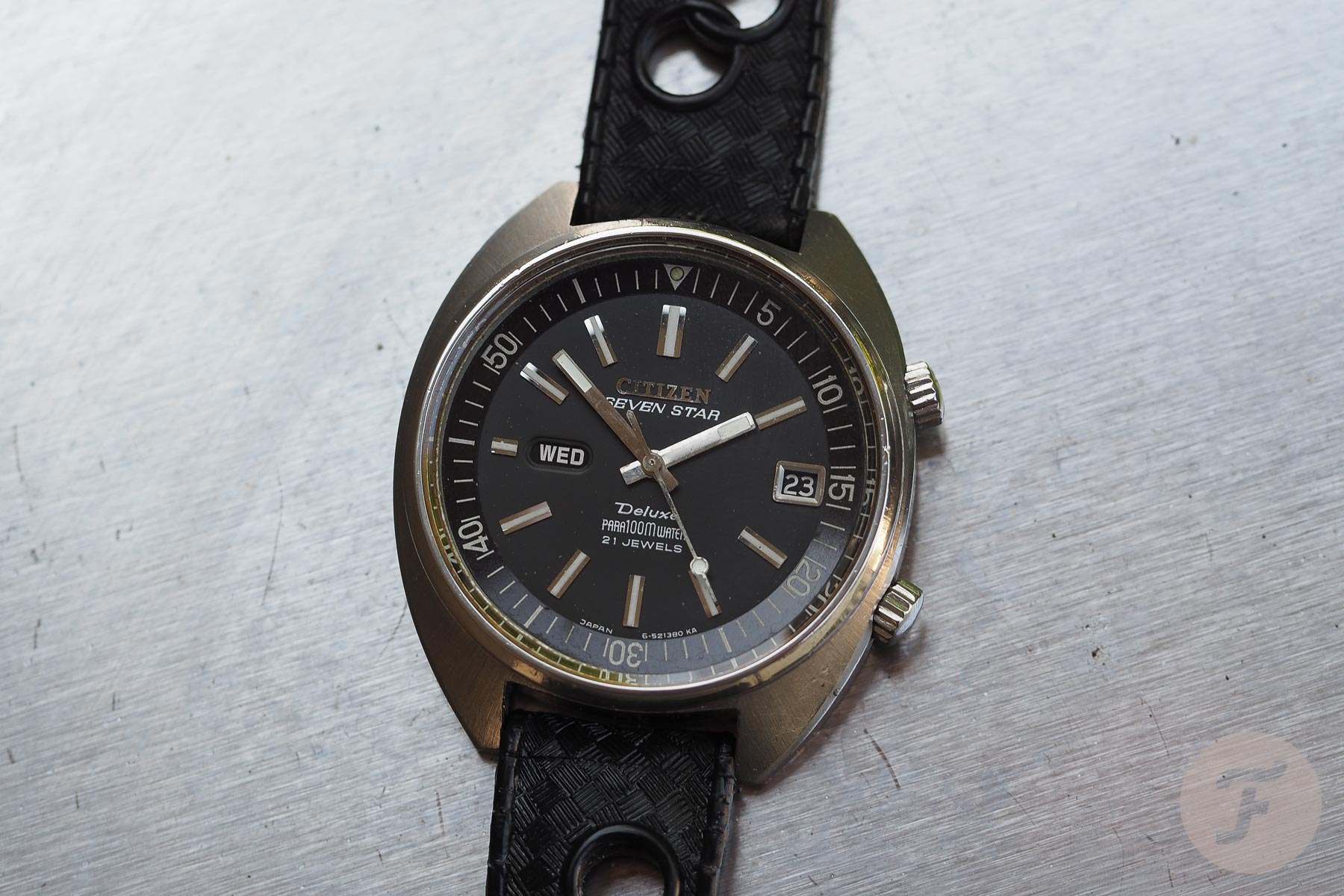 The Citizen Seven Star Deluxe Diver before you was made in 1969 as reference 4-520017Y. As you can see, it embraces the decade to come with its c-case shape. And while Citizen made plenty of watches with this shape, it’s actually one of the few divers with a silhouette like this. I’m normally not a huge fan of this style, but there’s something about this watch that I really like. I called it elegant before and I think that’s an apt description. This watch has a dressier, more sophisticated look that differentiates it from both its relatives and competitors. 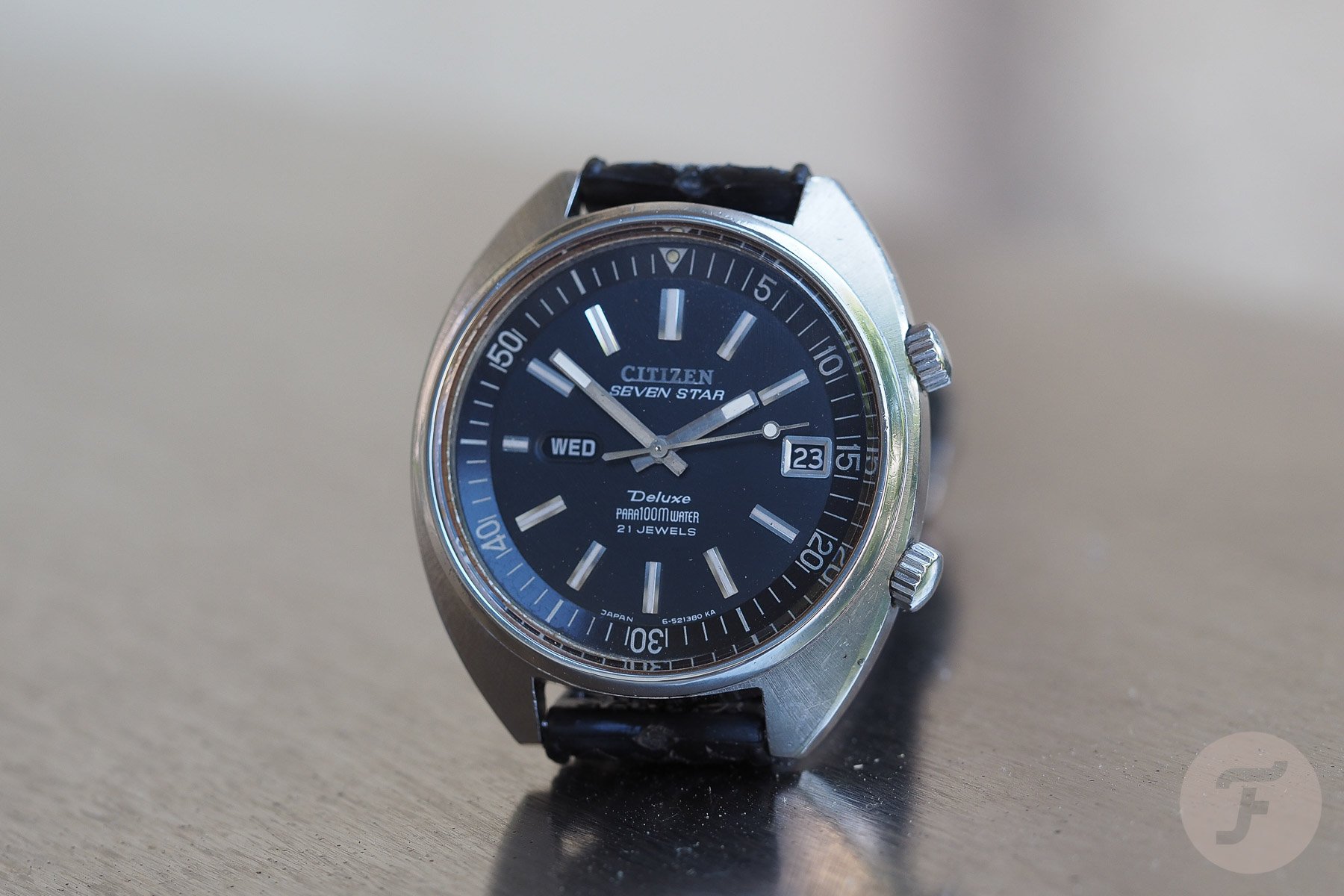 Firstly, the Seven Star Deluxe contains an internal rotating bidirectional dive ring. The unsigned upper crown operates this smoothly. Like Seiko, Citizen bounced back and forth between its application of internal and external bezels. Perhaps they were both reacting to the styles around them such as the Swiss “EPSA” Super Compressors. Whatever the case, it’s interesting that these brands tried to offer everything under the sun at the same time. 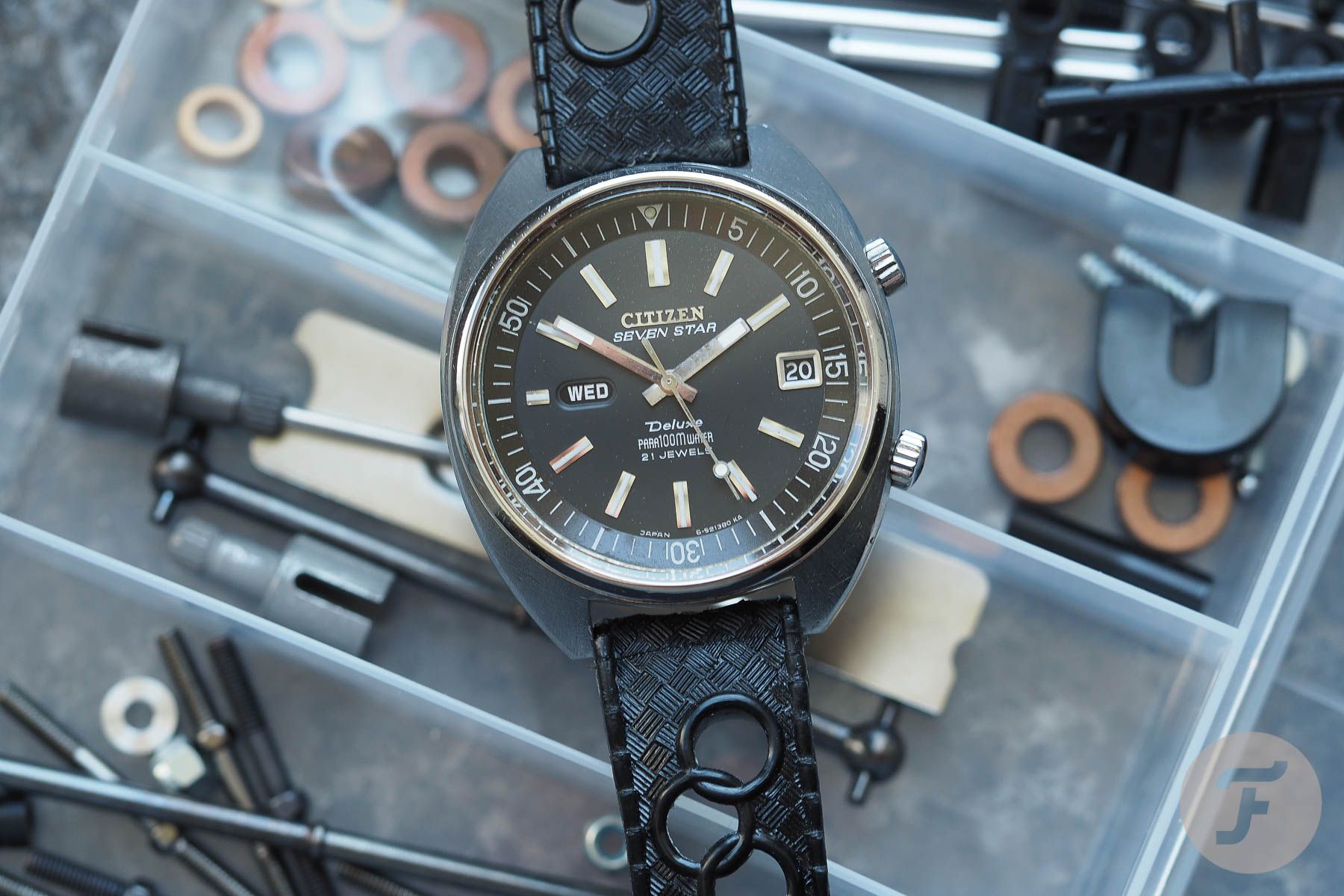 The other design element I find interesting here is the separation of the day and date window. Recall the Seven Star 2812-Y that I reviewed a couple of years ago and it was powered by the same in-house automatic caliber 5270 with day and date display. On that watch, though, the day and date displays are next to each other. Here on today’s Seven Star Deluxe, the day is at 9:00 and the date remains at 3:00. The cool detail is that Citizen minimized the look of the day window because it lacks a chromed surround and actually has a little “step” into the dial. It’s as if they didn’t want to call attention to the fact that it’s actually closer to the center. The date, on the other hand, does have a chrome surround and blends well with the hour index design.

Another takeaway from the Seven Star Deluxe is that it’s very solid and well built. I’ve said it before, but Citizen made some seriously nice watches during this period. The brand still does, but you rarely hear about its prowess during the 1960s and ’70s. The case finishing boasts matte sunburst striations and a polished bezel that surrounds a flat mineral crystal. It’s odd that unsigned crowns were chosen, but they’re well-sized to deal with time setting, hand winding, and the quick set date. Sorry, no quickset for the day. 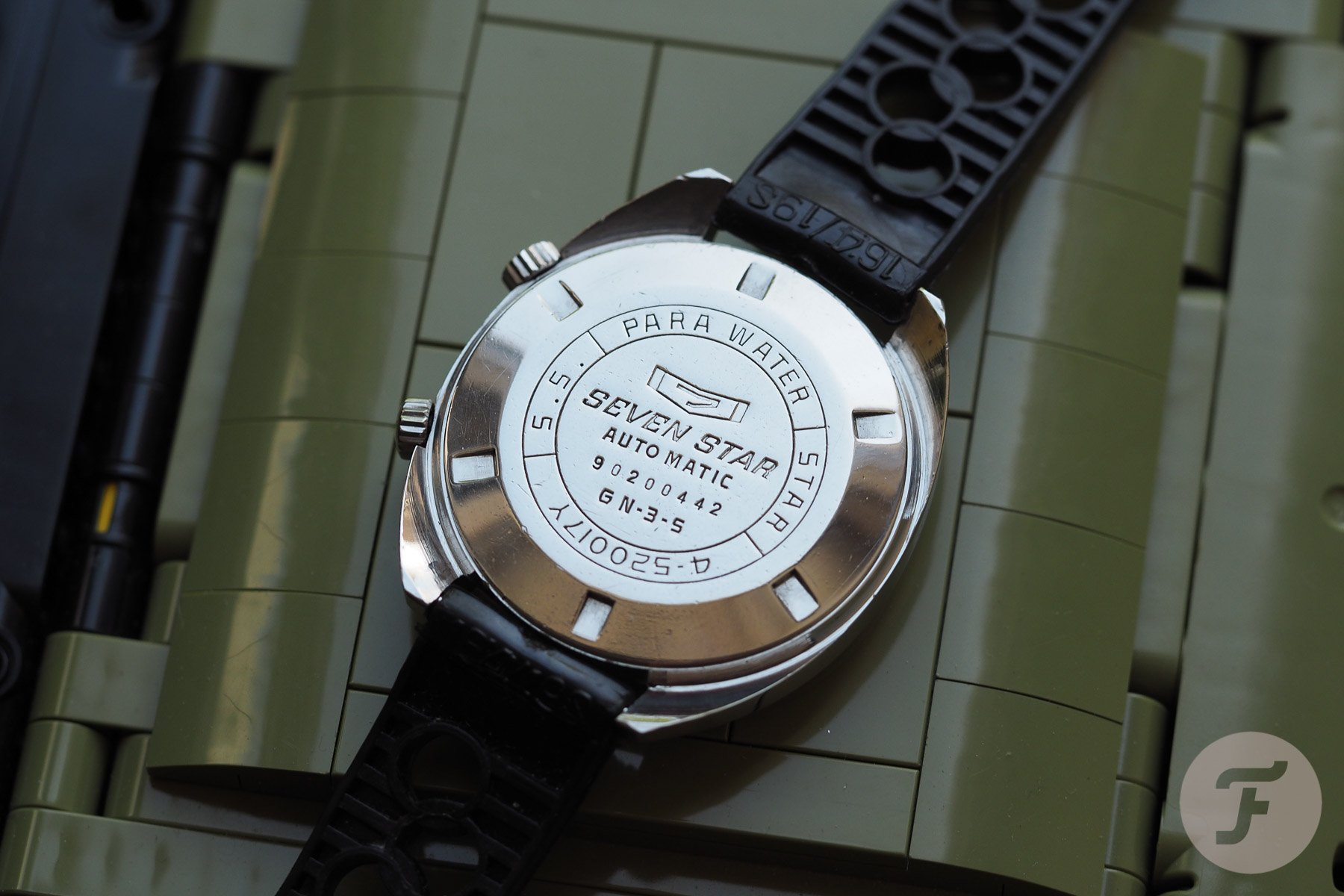 Flipping the watch over shows us a solid screw-in case back. This helps afford the proclaimed 100 meters of water resistance — ahem, proof back in those days. That puts it above the 70 Meters promised by the Seiko Sport Diver Series. Yes, an extra 30 meters despite a push/pull crown. Remarkable.

As an aside, if you’re a fan of vintage Japanese anything, you’ll note that ridiculous hyperbole — always in English — was a thing back then. Words like “Super”, “Deluxe”, “King”, and “Grand” were just some of the over-the-top descriptors on consumer items. One-upmanship was commonplace even if it was nonsensical. For instance, Orient once made a watch called the — wait for it — Grand Prix with 100 jewels! The bulk of those jewels on the movement did NOTHING! But there they were, loud and proud. 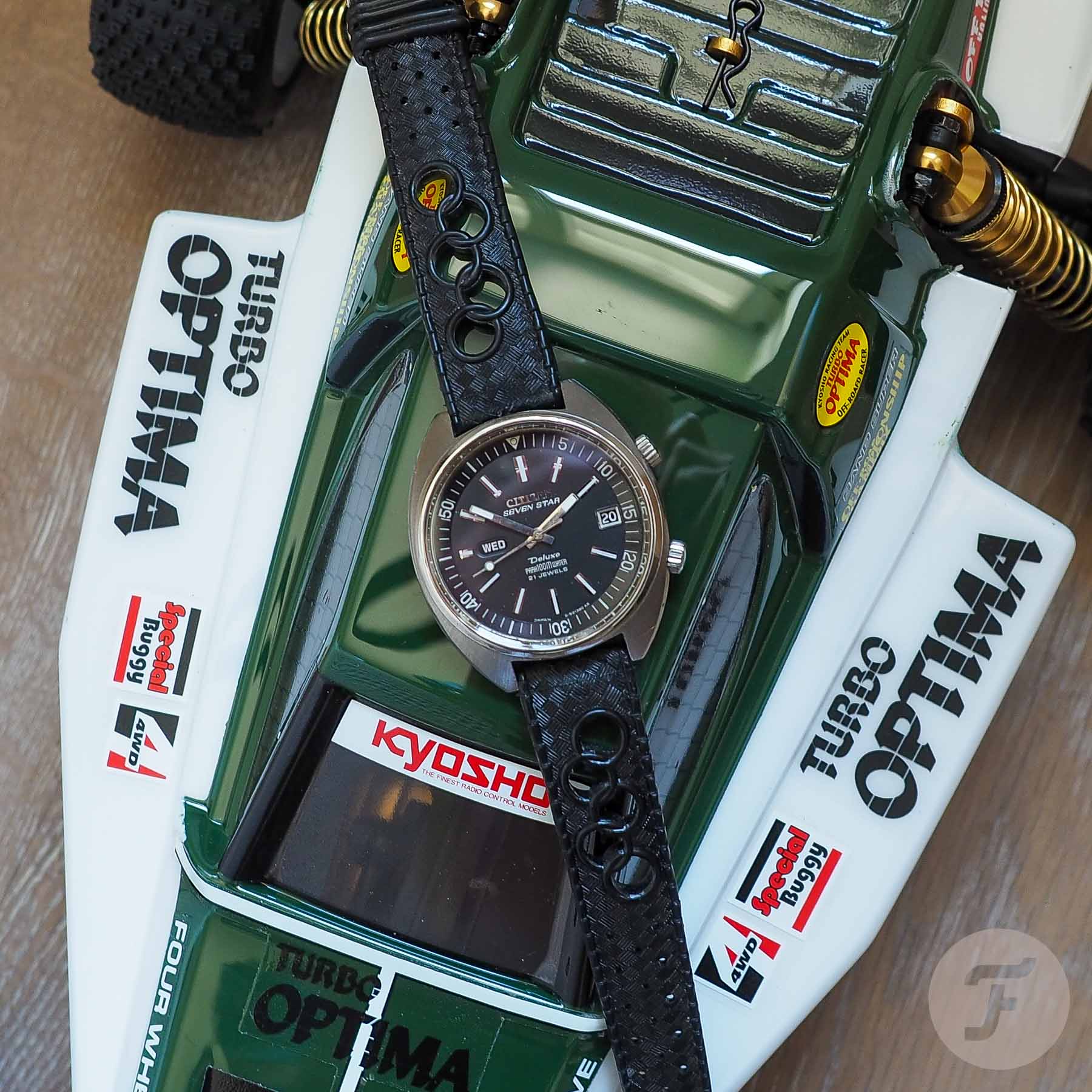 So when we return to our relatively humble Seven Star Deluxe, I get a kick out of the shielded “7” logo on its case back. It’s blatantly similar to the Seiko 5 logo, but guess what? Seven is MORE THAN five, so it must be better! It’s all a bit silly and reminds me of the scene in Something About Mary where Ben Stiller picks up a hitchhiker. If you’ll recall, this character’s “get rich quick” plan was to best the “8 Minute Abs” workout by creating a “7 Minute Abs” workout. Ridiculous! 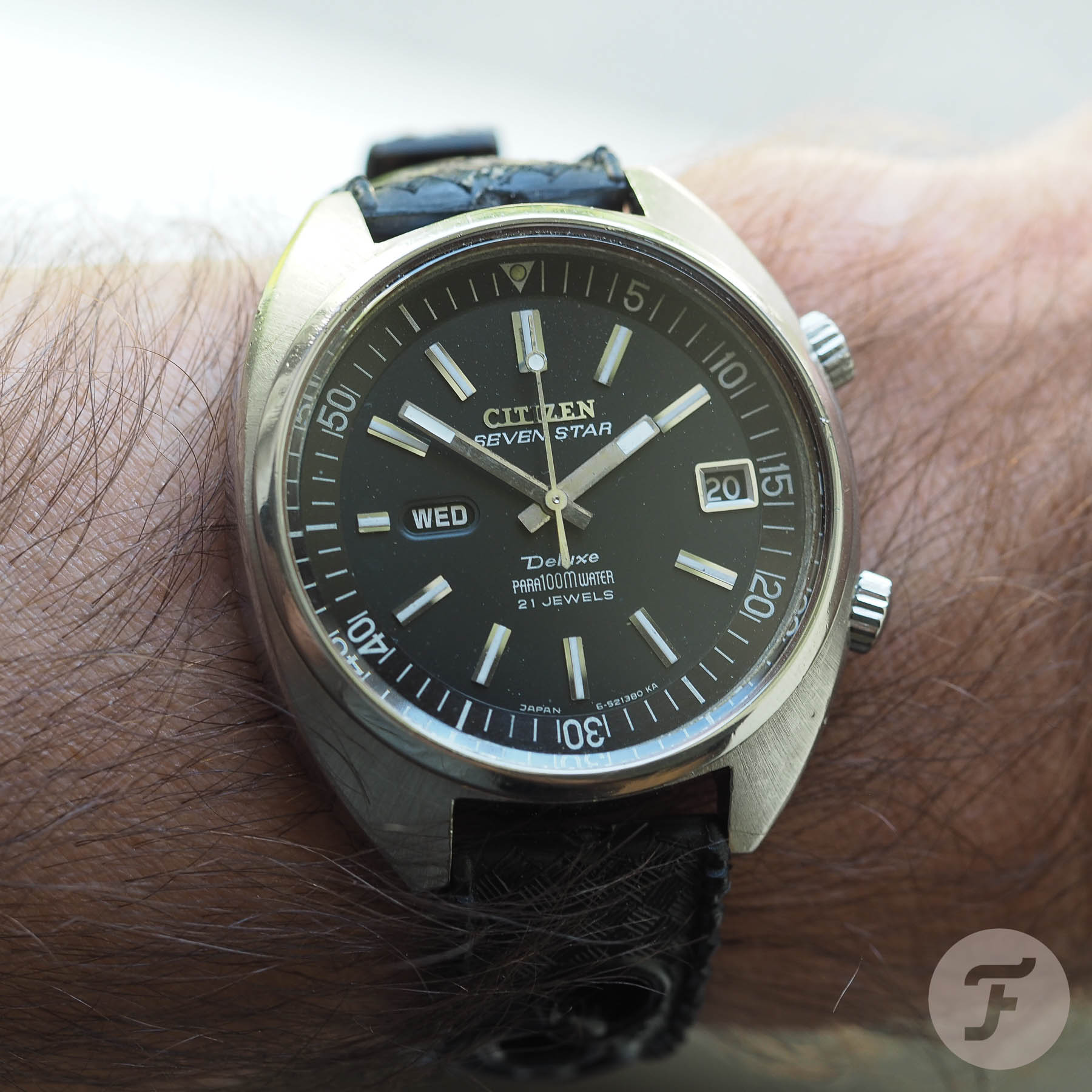 The Citizen Seven Star Deluxe Diver is yet another vintage watch that works well with modern tastes. At 41mm in diameter and 46mm lug-to-lug, this is a nice large watch. The case slopes downward on the topside somewhat dramatically and that gives it a smaller appearance. Also, a slender 18mm lug width tightens up the overall look. On a small wrist like mine, it works well. This model originally came with a nice looking stainless bracelet. Unfortunately, these were relatively delicate and are difficult to find. Mine was sent on this vintage Tropic-like strap with Olympic ring holes. It’s not my favorite, but it looks the part. 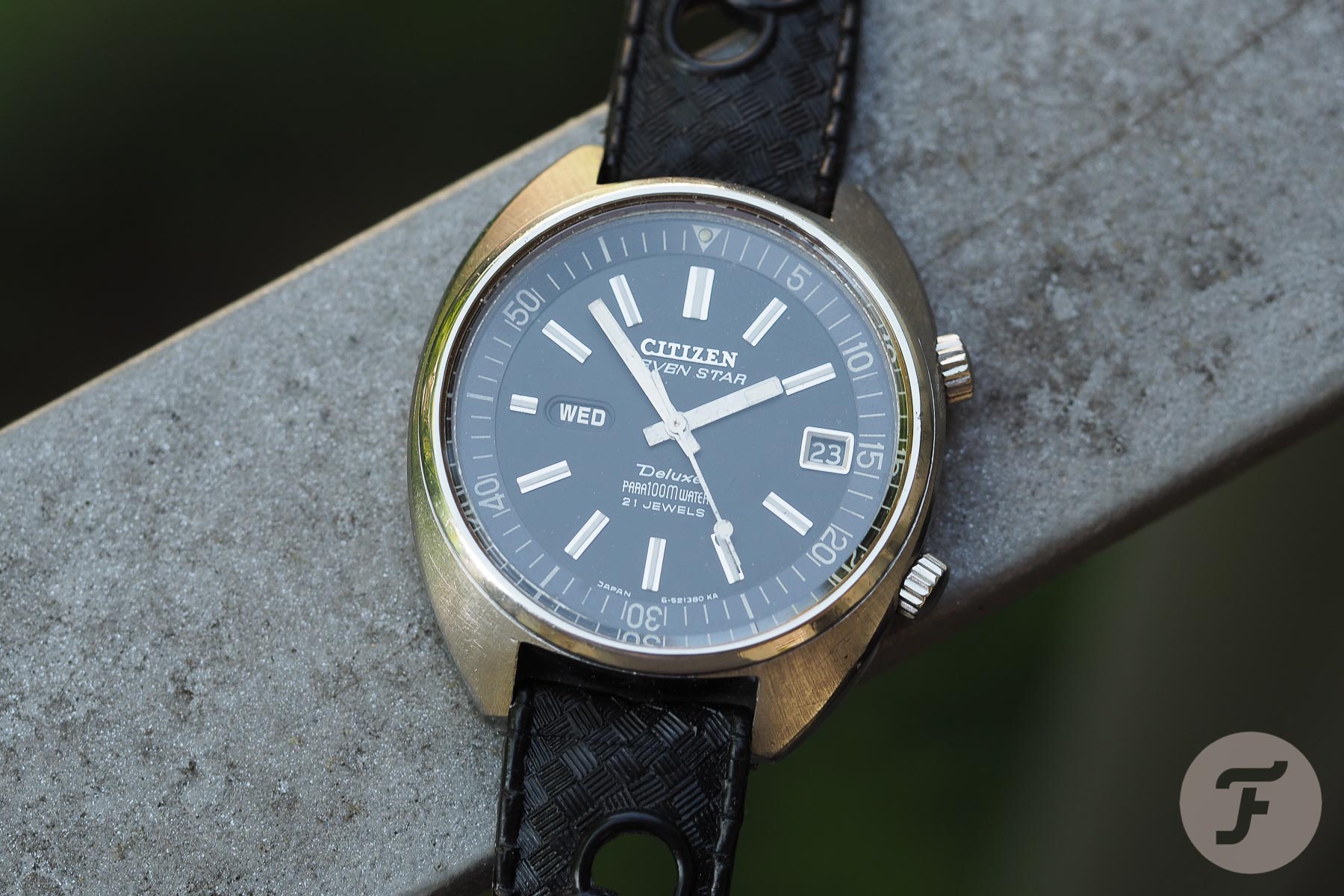 My Citizen Seven Star Deluxe Diver came from Japan and that’s probably the best place to locate one. They don’t come up very often, but I spy one every month or two. Figure on $300-500 for a decent model and add a basic service for good measure. The movements are robust and were used across a wide number of Citizen models. Therefore, spare parts are relatively prevalent via donor watches. This Seven Star is certainly not the most famous vintage diver from the well-known Japanese brand, but it is probably one of its more unique models.