“Clebar” is apparently slang in French for wet dog. I suppose that’s better than a cat, but it’s still not overly flattering. Then, we have Robert-Jan’s colorful take on the word – he thinks it sounds like an ill-gotten malady that would often require a shot of penicillin. Either way, Clebar is also the name of a watch brand and a certain chronograph model is the subject of today’s #TBT.   I’ve had this watch for roughly a year now and it’s a study in mystery no matter how you slice it. Information is scarce and the design is confounding. There’s one thing that easy to explain, though, and that’s the beauty and condition of this watch. Furthermore, it contains a fantastic movement not often seen outside of Breitling. Let’s take a closer look at the Venus 178-equipped Clebar chronograph. 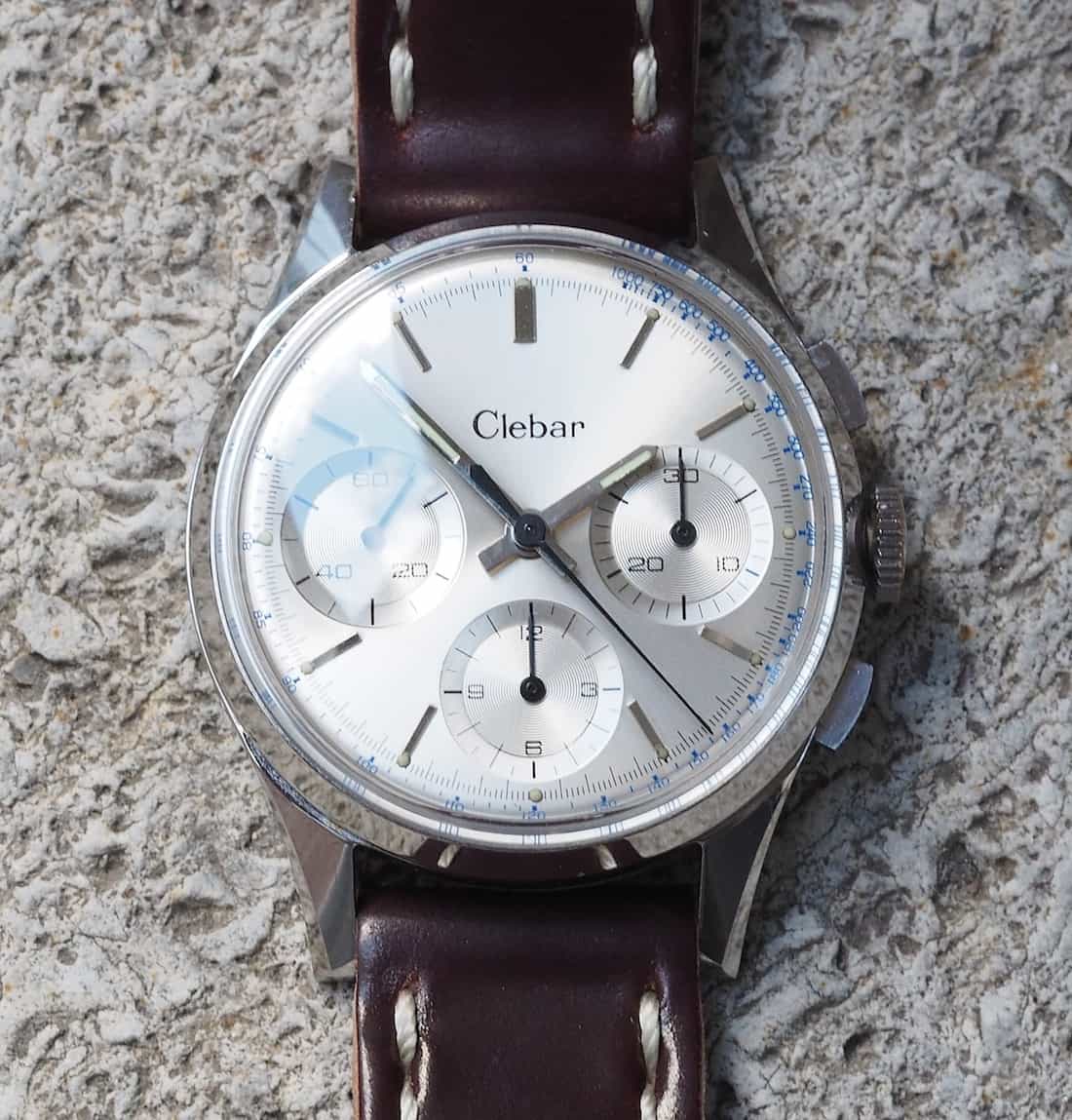 Clebar…some history, but not much!

It’s not so rare that we kick off these articles with the question, “what is a insert odd brand name here?” and this time it’s no different. You see, Clebar is one of those brands that pop up semi-frequently when trolling eBay or various for-sale boards on forums. The brand is generally linked to lower cost models from the 1940’s through the 1960’s and many share cases and dials with other brands. So, I set about doing some research. What I found was fairly confusing and I’m still not sure that I completely get it. It seems that the brand was founded in 1925 in Le Locle Switzerland and produced everything from stopwatches to wristwatches. What I have also gathered is that they were not an actual manufacture. Later, it seems that the brand formed a very close link with Zodiac and that this brand actually produced some private-label pieces on behalf of Clebar. To make things more confusing, it also appears that Heuer made some of its “poor man’s” pieces for both Zodiac and Clebar. So, yes, confusing and just one more anecdote to prove how “creative” the brands were back in the 1960’s when it came to trying to fill up production time. Continuing down the interesting path, we find out that Clebar and Zodiac were both distributed by the some USA importer during the 1960’s, but at some point, the brands split. Now, as many know, Zodiac is owned by Fossil and Clebar has been resurrected independently. So, back to our specific subject, what’s the story behind today’s Clebar chronograph? 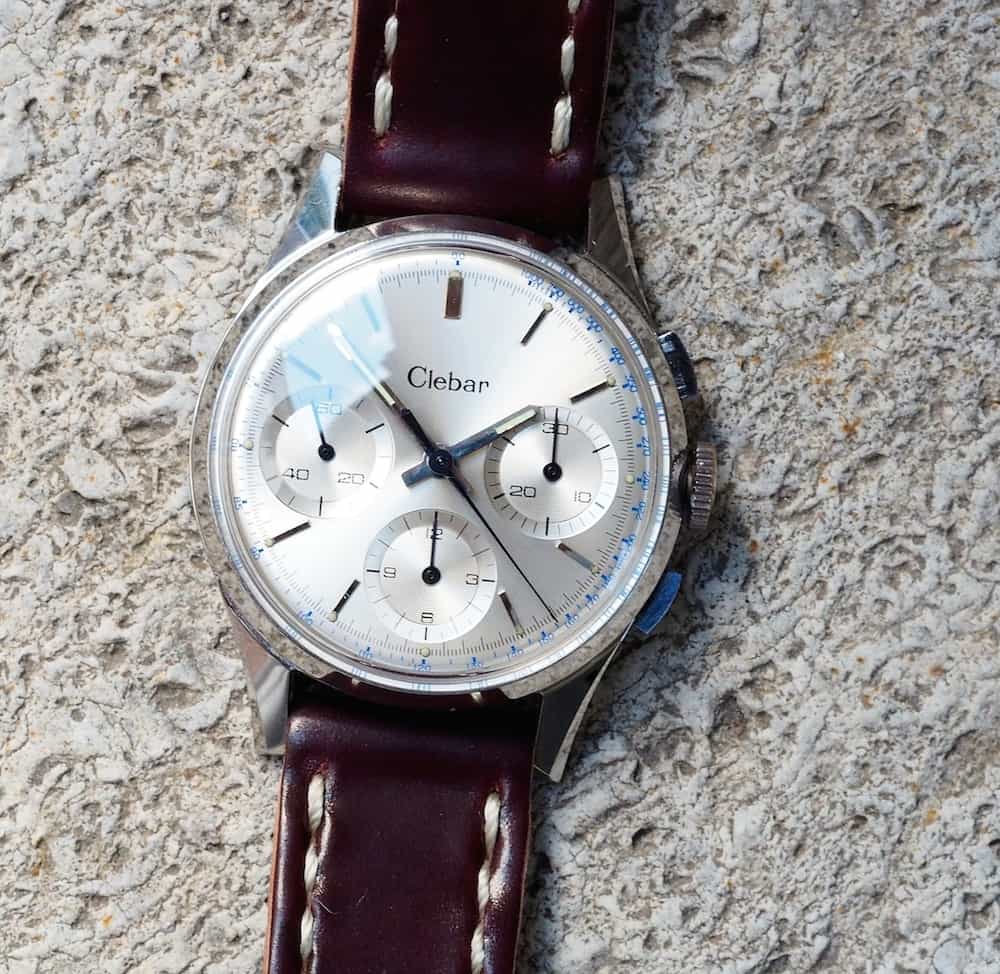 Breaking down the Clebar chronograph

Active forum readers will likely recognize this Clebar chronograph from a little over a year ago. The owner at the time had bought it for a very low price, complete with box and Zodiac-branded bracelet, and was inquiring about the watch.   The responses were mostly complimentary but not a load of info existed about the actual piece. When the owner ultimately put it up for sale, I acquired it and began researching it further. Interestingly, the only other example of the watch that I found was a Zodiac-branded piece that came up for sale on a different forum. Even more oddly, despite the fact that I believe that Zodiac manufactured these watches, the Zodiac-branded piece was marked as a Clebar on the movement bridge and the inside case back. 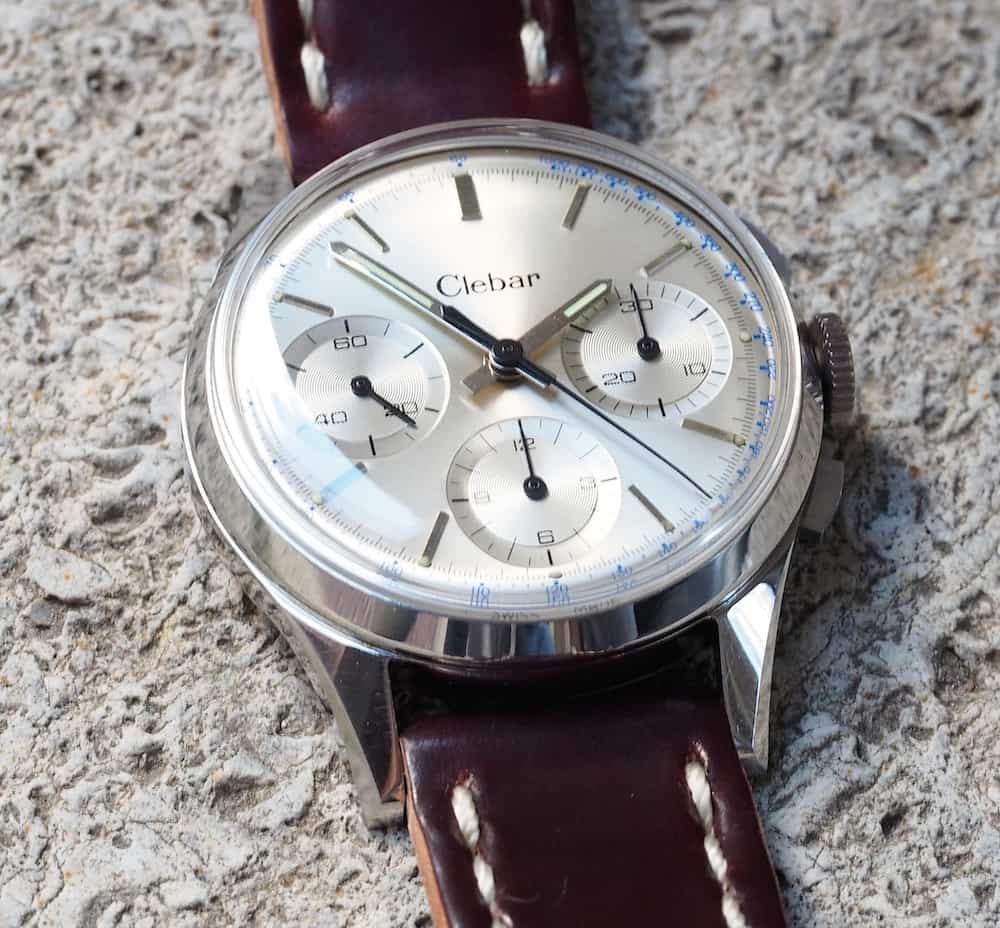 Not a “poor man’s Heuer”, but the Clebar chronograph contains some similarities to pieces from the storied brand

One more interesting note on this Clebar chronograph relates to the topic of “poor man’s Heuers”. Let’s be clear this watch does not fall under that category. It does have some cosmetic traits that are highly consistent with Heuers of the day, notably the 2447 Carrera, but it also has some glaring differences. Let’s get into those as we discuss the aesthetics and innards. 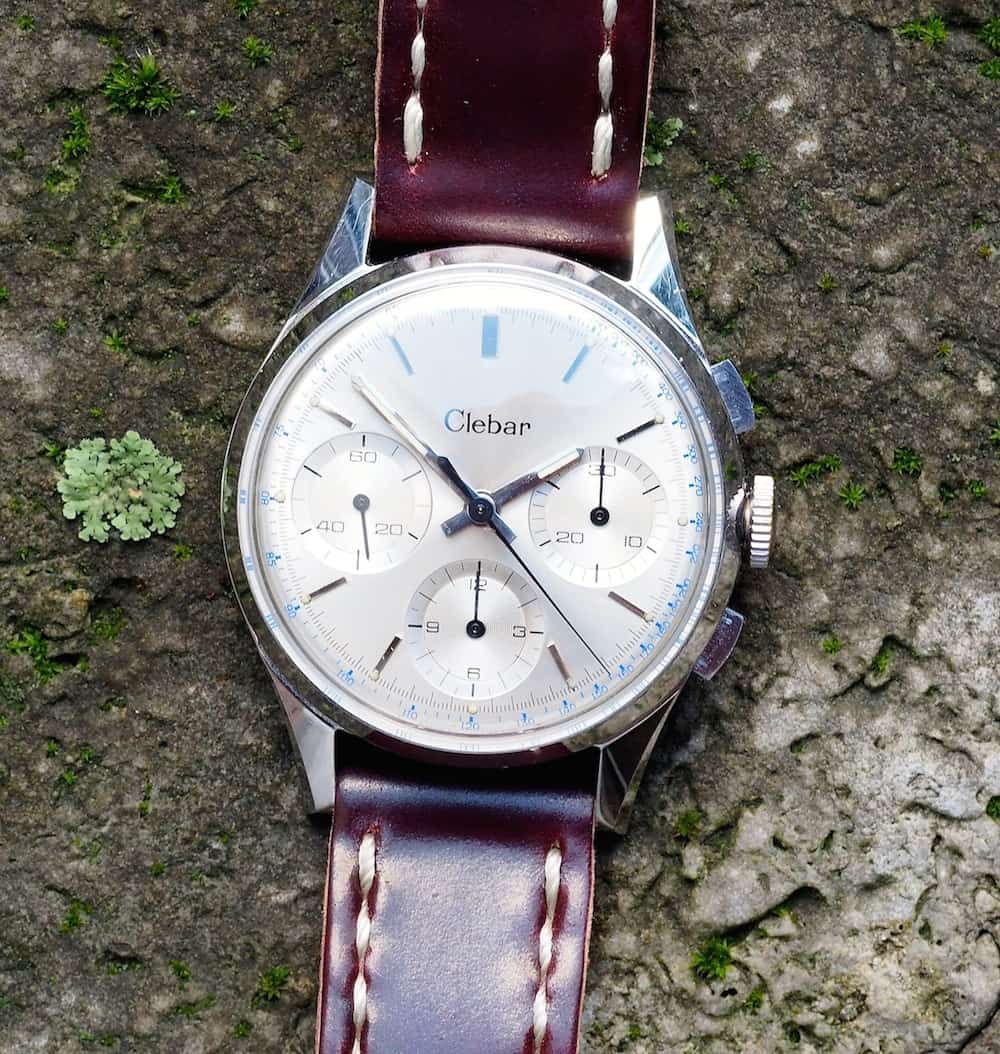 First off, the Clebar chronograph is a stainless steel, 35mm diameter watch with an 18mm lug width. Rather than trying to convince you that it wears larger than its size – it does – I’ll say that it compares very well to the recently reviewed Benrus Sky Chief. Perhaps, due to the Clebar’s more sculpted lugs, it comes off as a little more dainty, but not by much.

As with the Benrus, this piece has a dramatically tall domed acryclic crystal joined by a steep, polished steel bezel. The case back is a lovely snap piece that contains a brushed surface in its center. Underneath this case back, just like the Benrus in its earliest renditions, a column-wheel Venus 178 provides the drive. This is interesting as the movement wasn’t really used by anyone in the mid/late 1960’s other than Breitling.   Heading back to the case and its lugs, they’re chamfered and finished with some amazing quality. Before we jump to the dial, take a look on the right side of the watch and you’ll see a wide diameter, but flat crown sitting between two flat pushers. We’ll come back to these buttons when I bring everything together, but keep them in mind as they’re clearly from an earlier era. 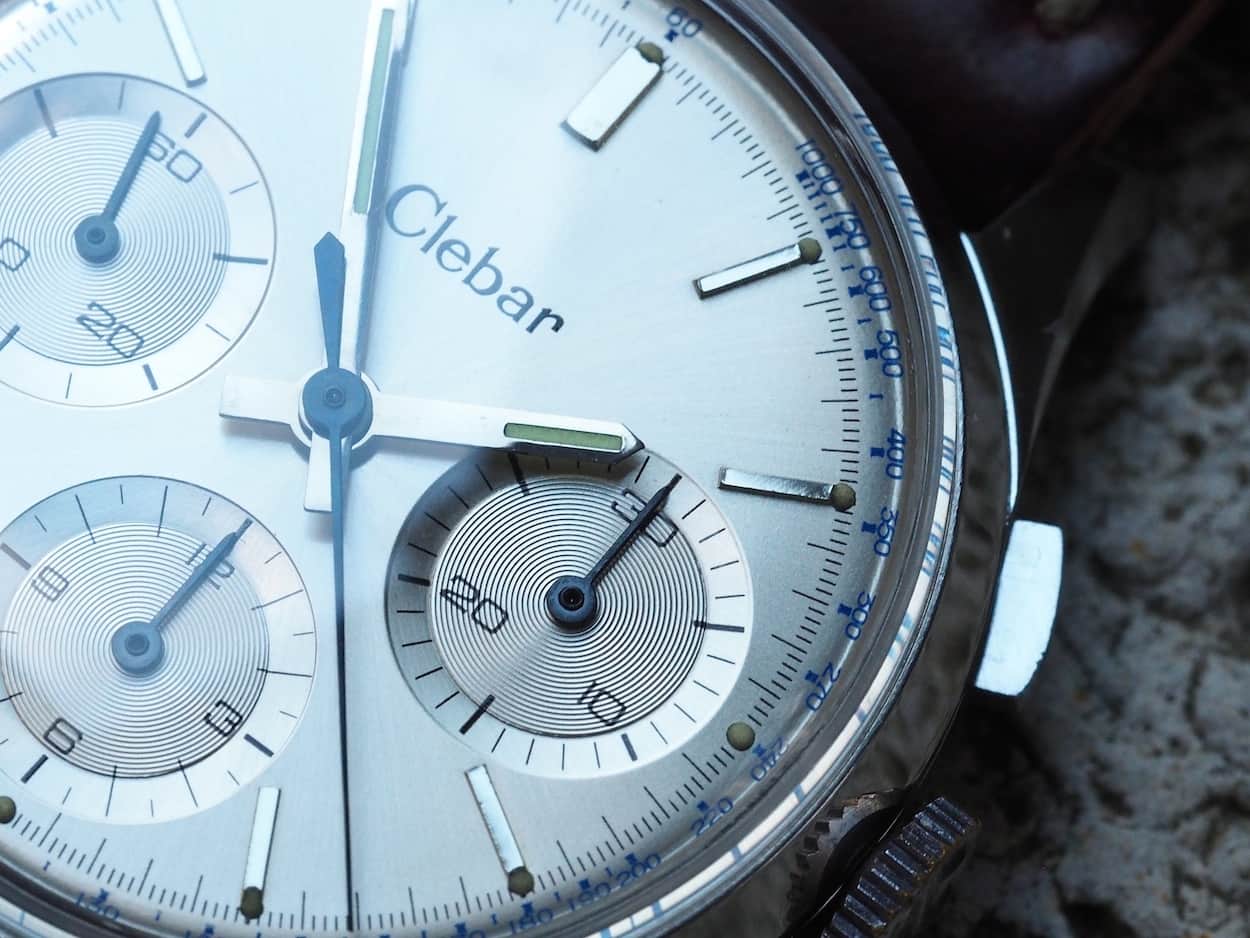 If you like lume dots, the Clebar chronograph dial provides a serious dose

The dial… This has to be one of the cleanest, most gorgeous dials I’ve ever seen on a watch. The condition of the dial on this Clebar chronograph is absolutely perfect – I guess I’d say that about the case too – and the colors are astounding. Check out that blue tachymeter track around the edge! And, see those amazing lume pips at the edge if each applied marker. The ridged pie pan sub registers are also in amazing condition against the silver dial. Then, we come to the hands and these are nearly identical – I say nearly as I haven’t measured them for length – to those found on the Carrera 2447. In fact, the entire dial is awfully similar. So, while this isn’t “poor man’s”, you could almost excuse one for thinking so. The snapping case back on the Clebar chronograph

Seriously, how old is the Clebar chronograph?

So, if you’re one who takes a watch at face value and simply considers it for its looks and, maybe, for its internals – nothing wrong with that – you’re likely thinking that the Clebar chronograph is a pretty nice watch. Sure, it might be a little small for your normal tastes, but it’s a well-executed watch, right? I agree, but it is a conundrum. What we actually end up with is a bit like a 1980’s Land Rover using a 1950’s Buick 215; let’s explain. You see, the size of the watch is a tad small for something from the mid/late 1960’s, but more than that, it contains flat pushers. These flat pushers were in vogue during the 1940’s through the 1950’s – again, think of that Sky Chief, but were really out by the later 1960’s. Then, let’s head back to the dial. It’s absolutely a product of the later 1960’s and if I had to guess, Singer, who also made Heuer’s dials, made this too. Finally, the movement is an oddity. If we take into consideration that Breitling basically had a run on Venus 178’s in the 1960’s and the movements went out of production during this time, it’s strange that Zodiac/Clebar ended up with some. All of this leads me to believe that Zodiac had cases and possibly movements in inventory from the decade prior and decided to use them with newer dials. In fact, it wouldn’t surprise me if the original dials –likely radium –had already started to turn by the time Zodiac began putting these pieces together. One thing that would be of interest is to find examples of earlier watches using the same case, but I’ve not thus far. It’s a theory that has absolutely no proof – gotta love that!!!! – but I’m having a hard time thinking of any other rationale. As always, if you know anything, let us know! 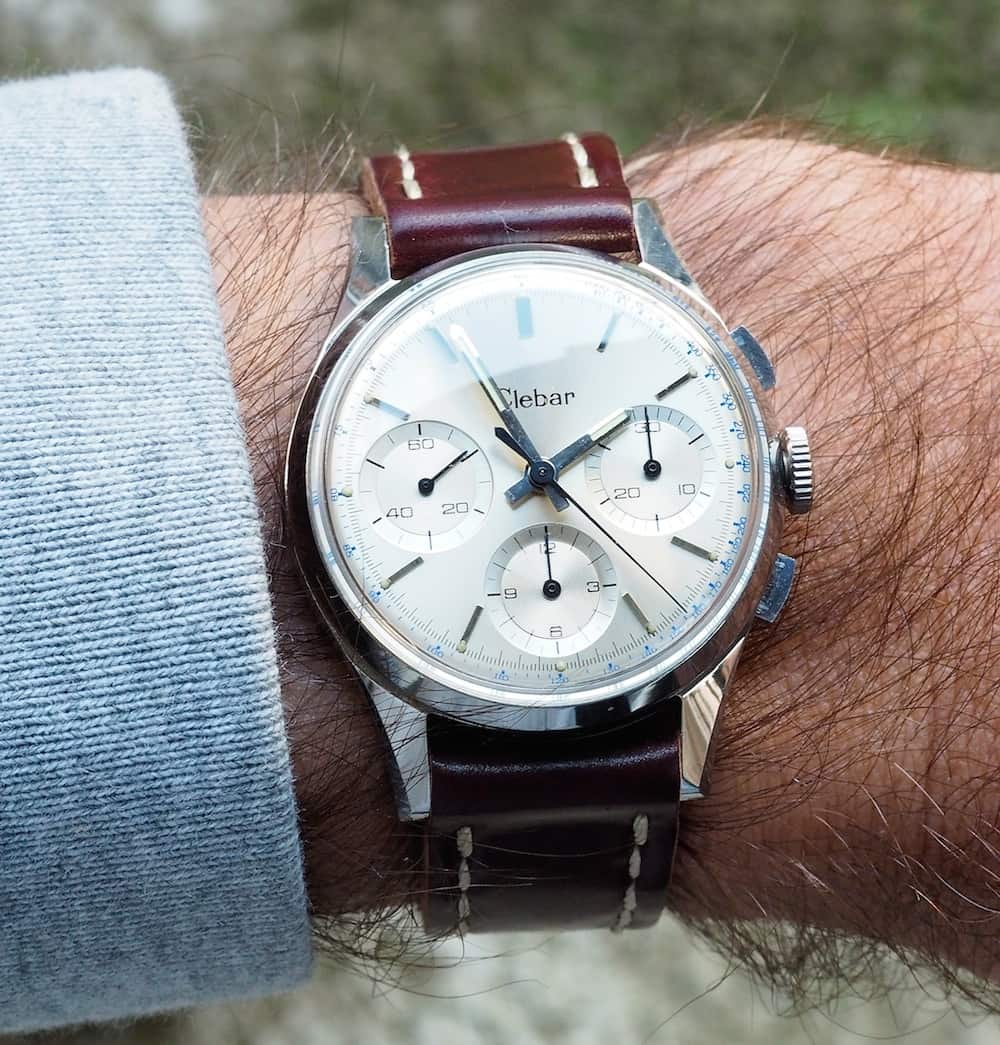 On the wrist, the long lugs of the Clebar chronograph give it a nice size that’s apt for wearing on most occasions.

The Clebar chronograph is a marvelous wearer

It’s fair to say that I’ve become accustomed to wearing these thickish 35mm chronographs. They really do wear well for work and straddle the line between a sport and dress chronograph. Plus, the lugs are certainly long enough to help the watch wear a little larger. You can see that I’ve chosen to pair this piece with the Arts & Crafts shell cordovan strap from Rover Haven that I recently reviewed. I think it’s perfect and suits the watch well. It’s a shame I don’t have the bracelet with me, but I really wasn’t a huge fan because it was decidedly modern for the case design. So, straps are the way to go with this piece and I think that black crocodile would be pretty epic. 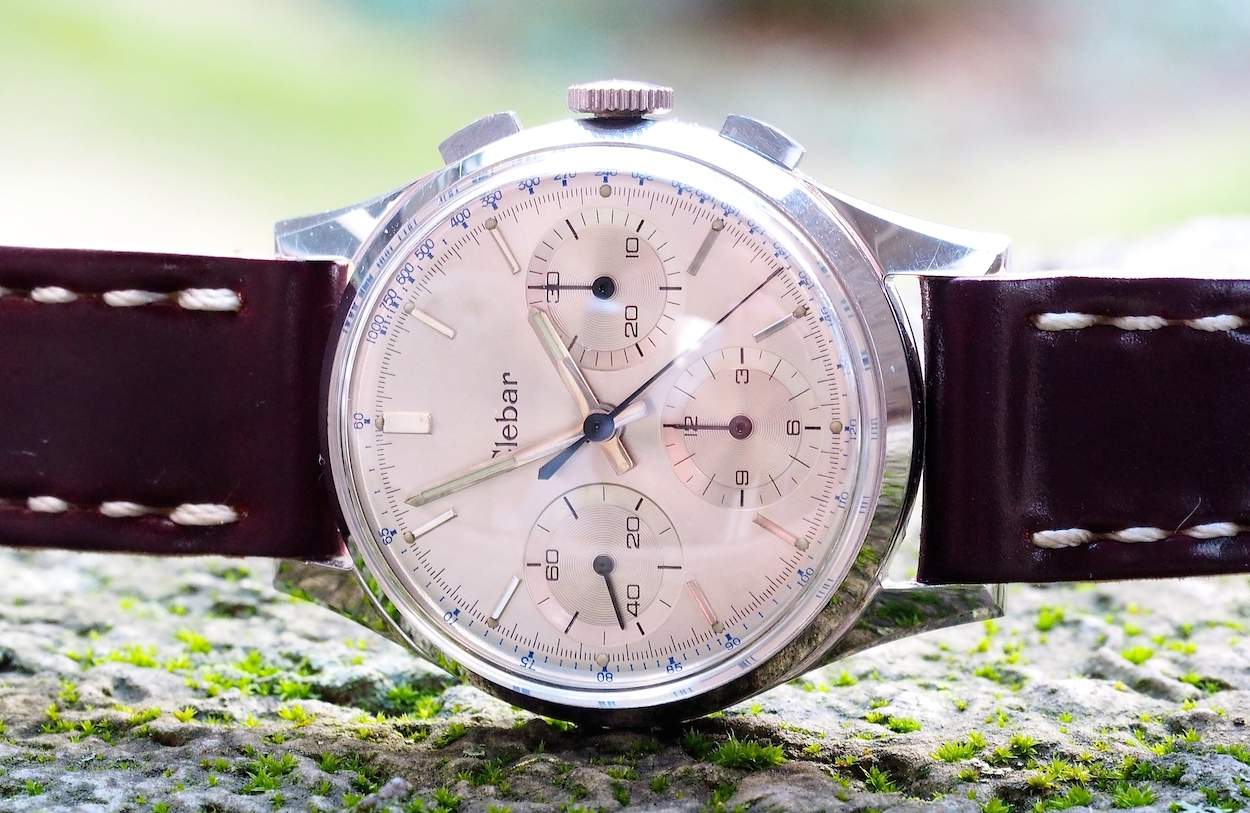 Find one if you can…

Assessing value on this Clebar chronograph is tough because there seem to be so few out there either in this rendition or in Zodiac guise. Still, I’d suggest that $1,000 – 2,000 would be suitable due to the quality and movement employed. I’d forget about buying anything short of complete other than perhaps a crown, as spares seem to be nonexistent. Obviously, the movement is relatively common, so that’s no issue as far as a fix or service. 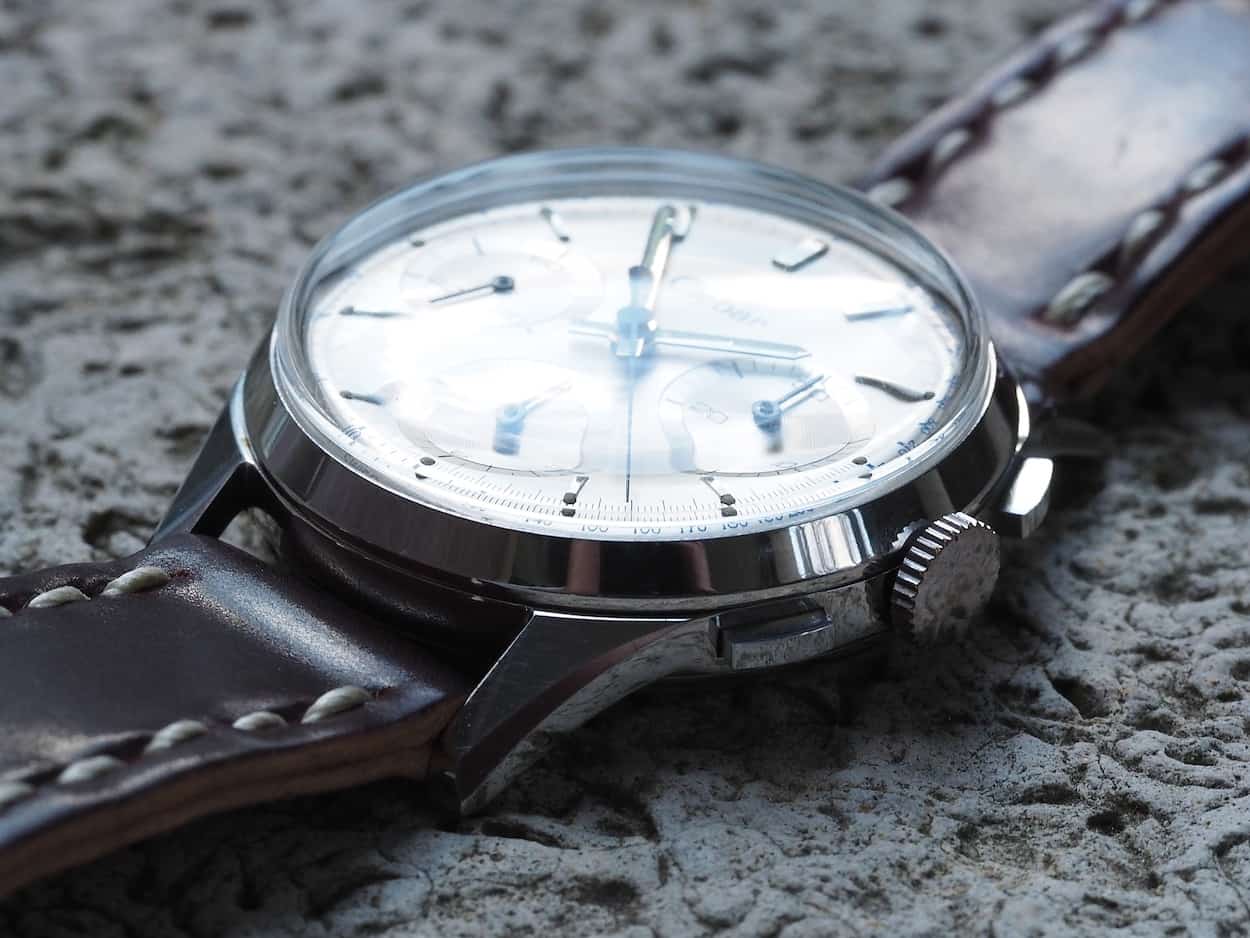 Thanks for taking a look at a decidedly odd watch in the Clebar chronograph. I find it fascinating that watch companies in the 1960’s were truly grappling with survival and decided to address this in many ways. Frankly speaking, selling a 1940’s-50’s case design with a modern dial doesn’t strike me as the recipe for a true turnaround, but it’s a somewhat fascinating anecdote nonetheless. As mentioned above, if you have any additional info on this piece, we’d love to hear it. Until next week…

On the wrist, the long lugs of the Clebar chronograph give it a nice size that’s apt for wearing on most occasions.

I’m normally not a fan of flat pushers, but they work well on the Clebar chronograph. The crown fits perfectly…

If you like lume dots, the Clebar chronograph dial provides a serious dose

The snapping case back on the Clebar chronograph

Nice long, chamfered lugs are present on the Clebar chronograph