We take a look at an unusually large watch from the 1960s — the Full Auto Orient King Diver.

We’ve delivered a fair amount of Orient coverage here on Fratello related to both new and old watches. Today, we’ll head down the latter path as we feast our eyes on what I think is a true classic. It may be a bit derivative, but the Full Auto Orient King Diver has real character. So what if it looks a lot several other twin-crown Super Compressors from the same era? I still find it highly attractive, and I figure there’s a good chance you will too. 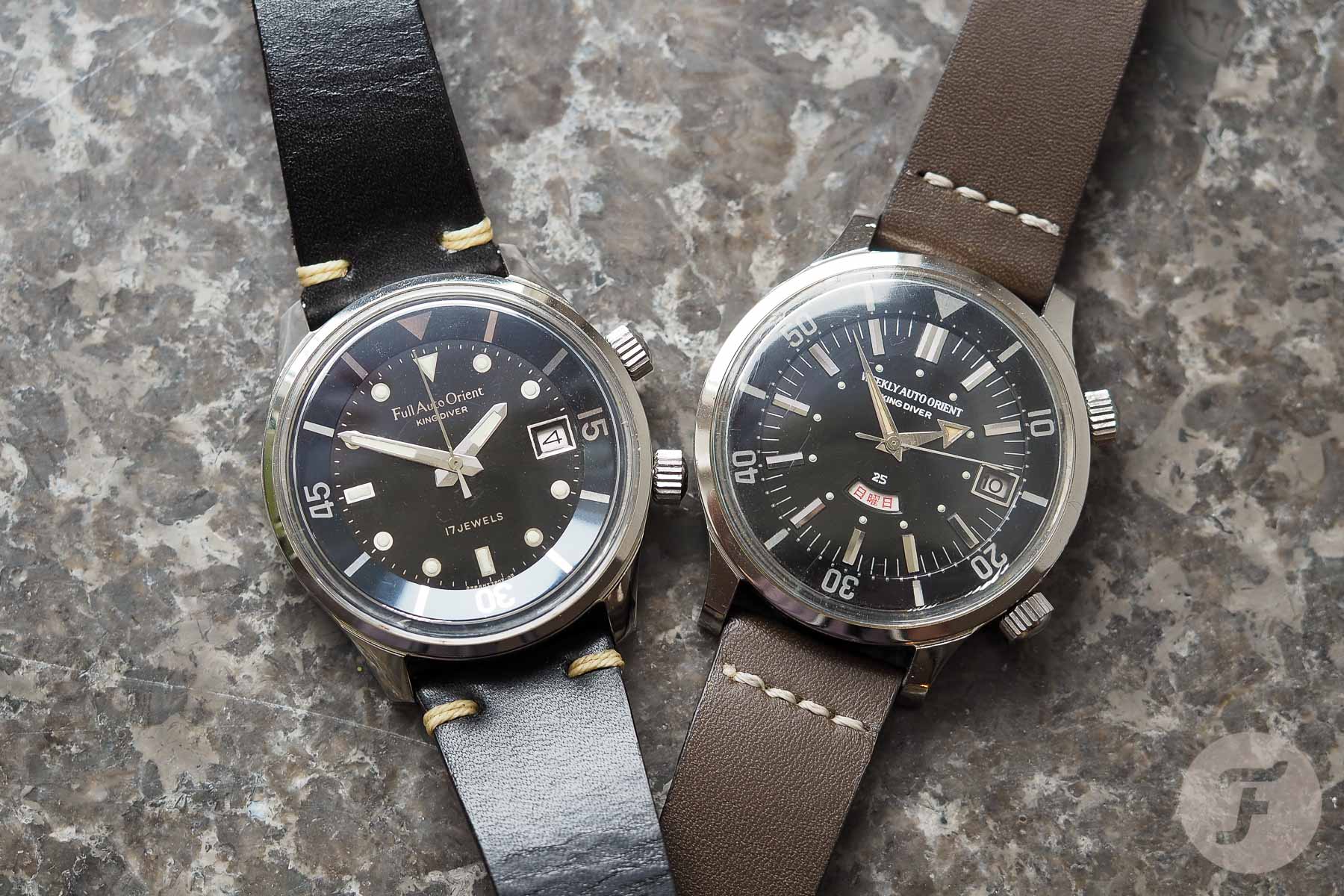 You’ll likely recall our recent article on the 70th Anniversary King Diver that’s due to hit shelves within the next couple of months in Japan and Europe. That watch took its direct inspiration from the 1965 original that I’m fortunate enough to own. It’s a big (43mm plus) watch that brings both a day and a date function to the wearer’s wrist. While I find it well designed, there’s no doubt that today’s Full Auto Orient King Diver is the simpler and more traditional piece. 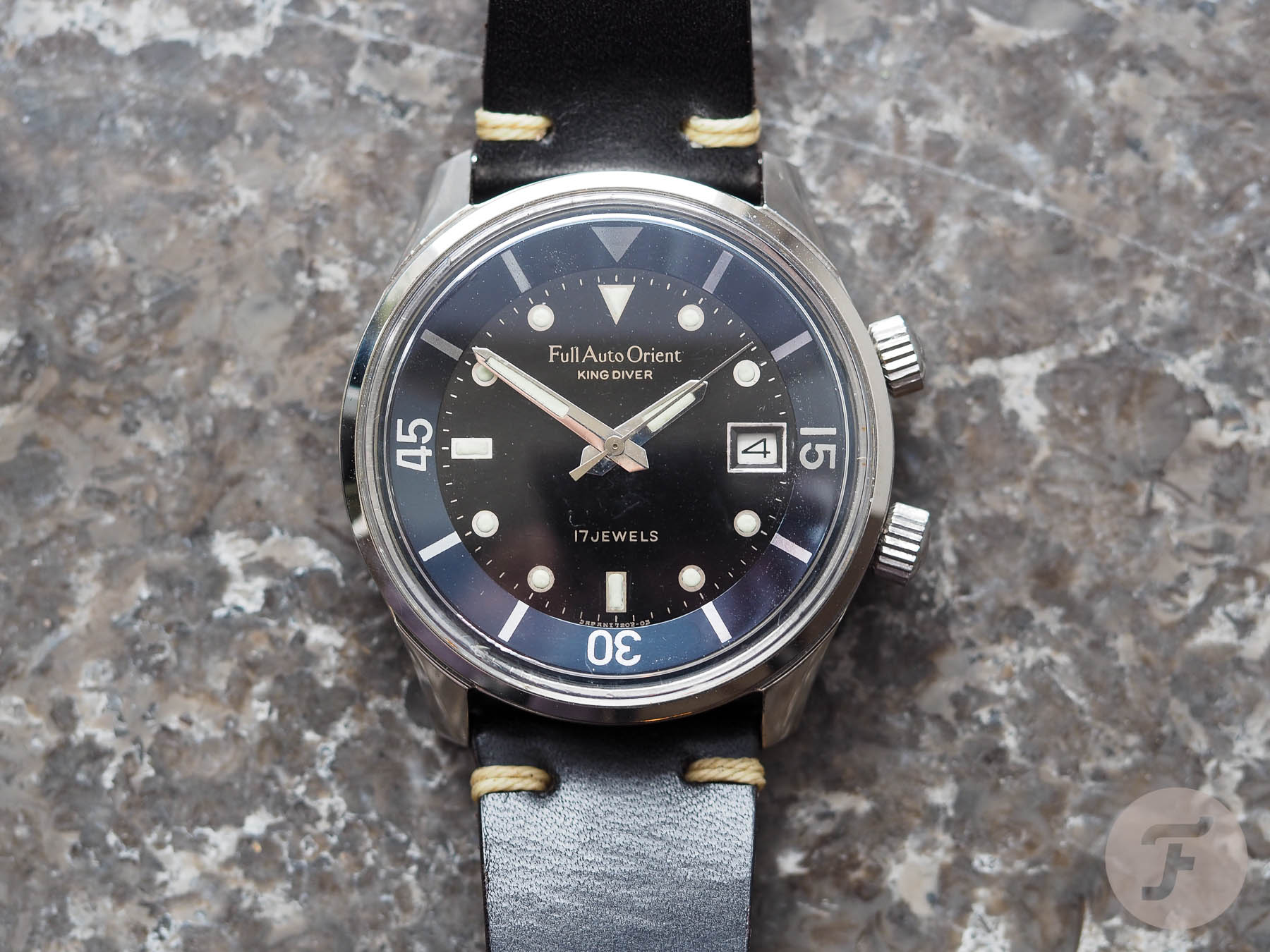 Officially known as reference T19202, the Full Auto Orient King Diver was likely first produced in the late 1960s. Like its more complicated relative, this watch comes in a size that wasn’t very typical for Japanese watches of the era. In fact, with a history of the Japanese men’s market opting for mid-size watches (a trend that continues to this day), it’s actually quite amazing that this line of Orients became so popular. The fact that these watches weren’t heavily marketed outside of the domestic market even adds to the intrigue. 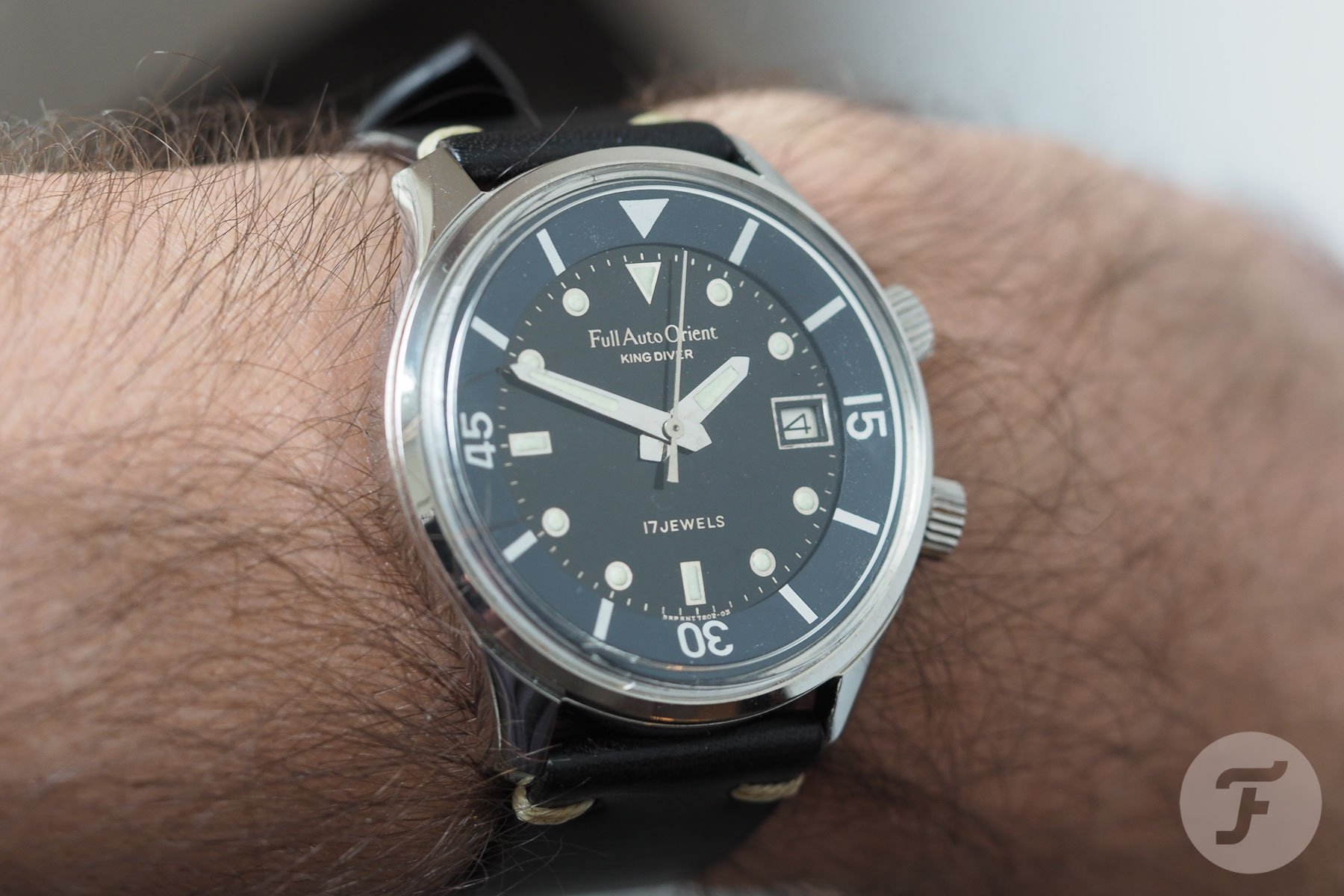 The Full Auto Orient King Diver weighs in with a 42mm diameter and 46mm length. That sounds large, but this sizing makes it quite a bit smaller than the Weekly Auto Orient. That watch had a lug to lug of 50mm! On the other hand, this watch seems far more balanced with its fatter 22mm lug width. Both watches fit my slim wrist, but today’s subject works well due to both its size and the fact that its lugs curve downward somewhat dramatically. 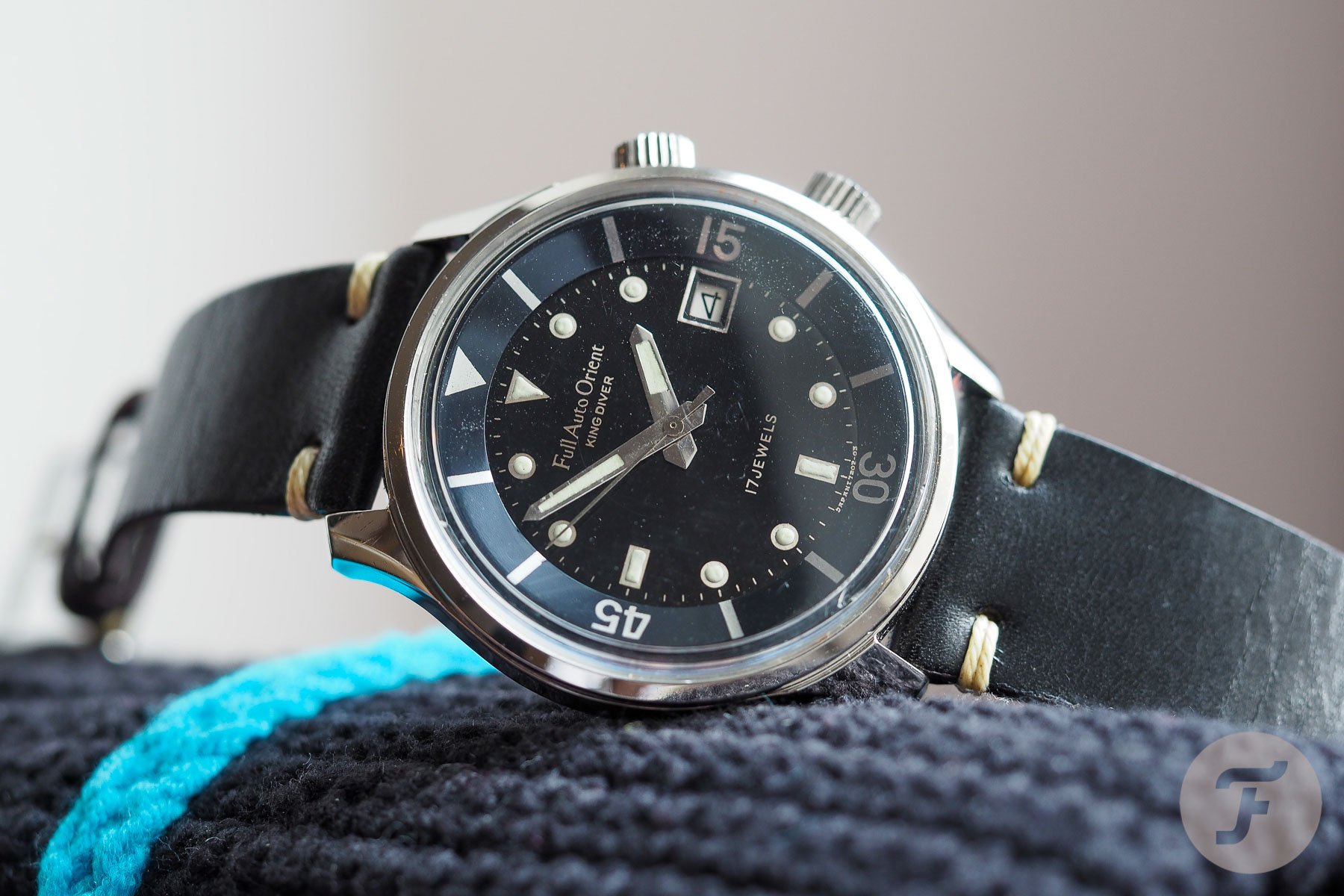 The Full Auto Orient King Diver is generally similar to true classic divers of the day from brands like Longines, Mulco, and others. As such, its appearance is easily digestible to a modern eye that may never have seen it before. The wide internal rotating dive bezel is commanding and the practical, no-frills dial gives this model an air of seriousness. That seriousness, however, quickly evaporates upon learning of the scant 40-meter water-resistance rating. That slightly embarrassing specification aside, I truly enjoy the metallic gold highlights on the dial and the puffy applied lume at each hour. There’s little fuss here and that goes for the simple contrasting date wheel as well. 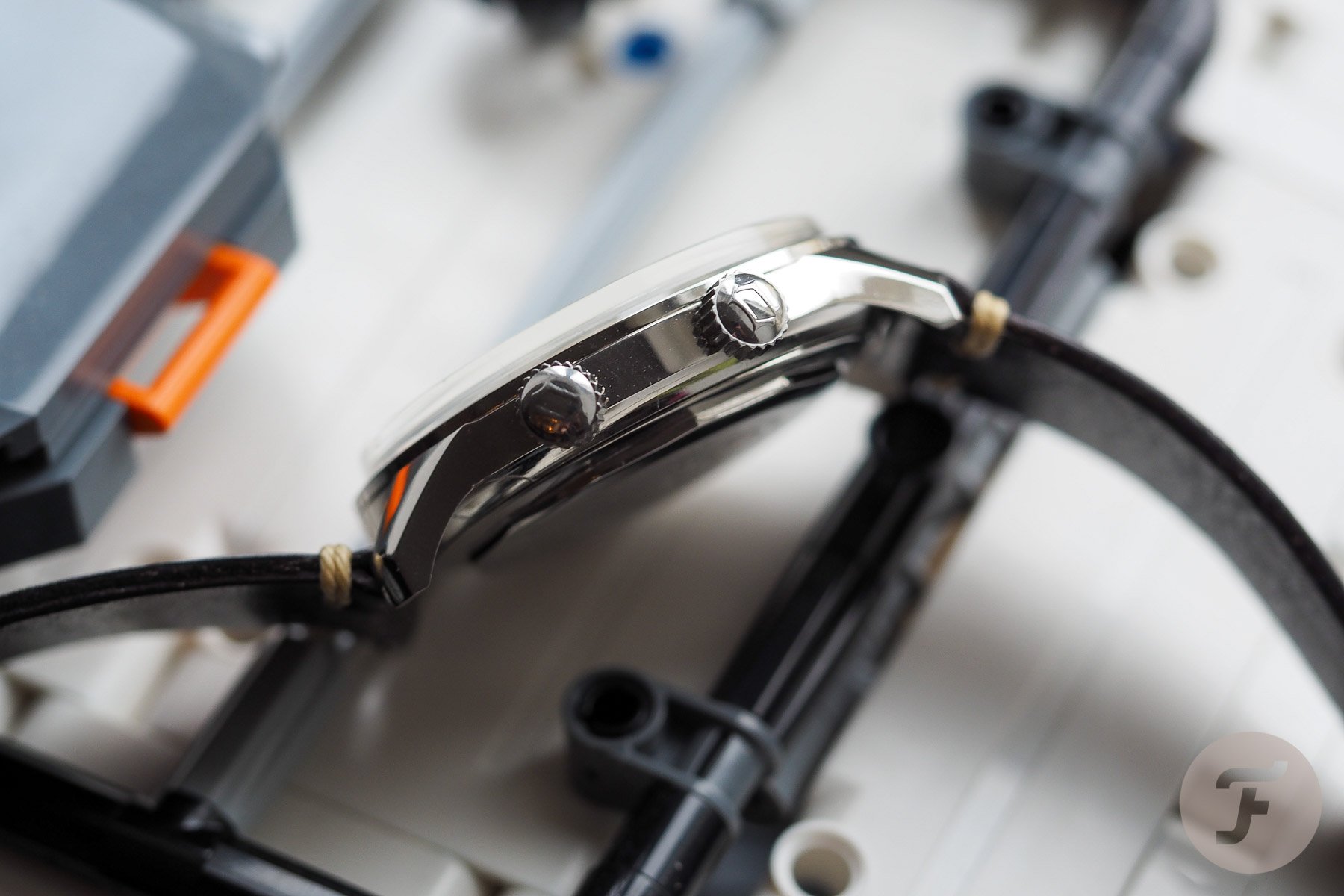 The Full Auto Orient King Diver uses two crowns as controls. As expected, the top crown adjusts the bidirectional inner bezel. It’s not difficult to turn, but there’s really no play at all. Considering the price point, it has been expertly engineered. The lower crown adjusts timing. Both crowns are adorned with the old Orient logo that looks like a fanciful diamond at some angles. From the side, you’ll also note a tall boxed acrylic crystal that rises slightly towards the center. This tall lens helps bring the total height of the watch to a still-manageable 13mm. 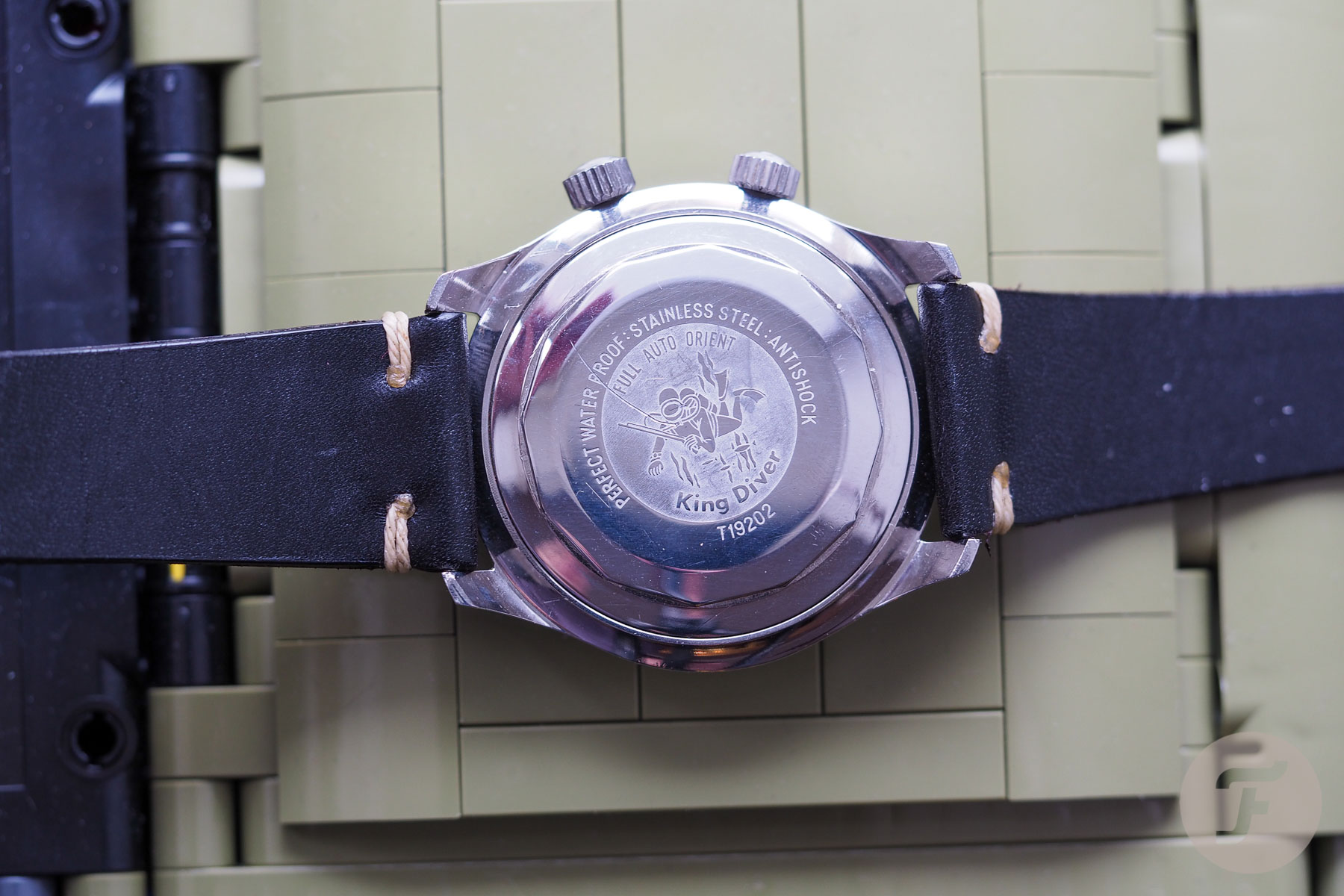 A Basic Automatic Under the Screw In Case Back

The Full Auto Orient King Diver is equipped with a 17 jewel automatic movement. My internet sleuthing has revealed that this movement is a relative of the Seiko 7625 line. On the Orient, though, the movement can be manually wound. There’s no quick set date feature or hacking, but the watch keeps time very well and should be easy to service given the universal availability of Seiko parts. You can see in the image above that the case back features a really cool period-correct image of a diver with a speargun. It’s a bit optimistic with that diver and the mention of, “Perfect Water Proof,” but it certainly looks the part! 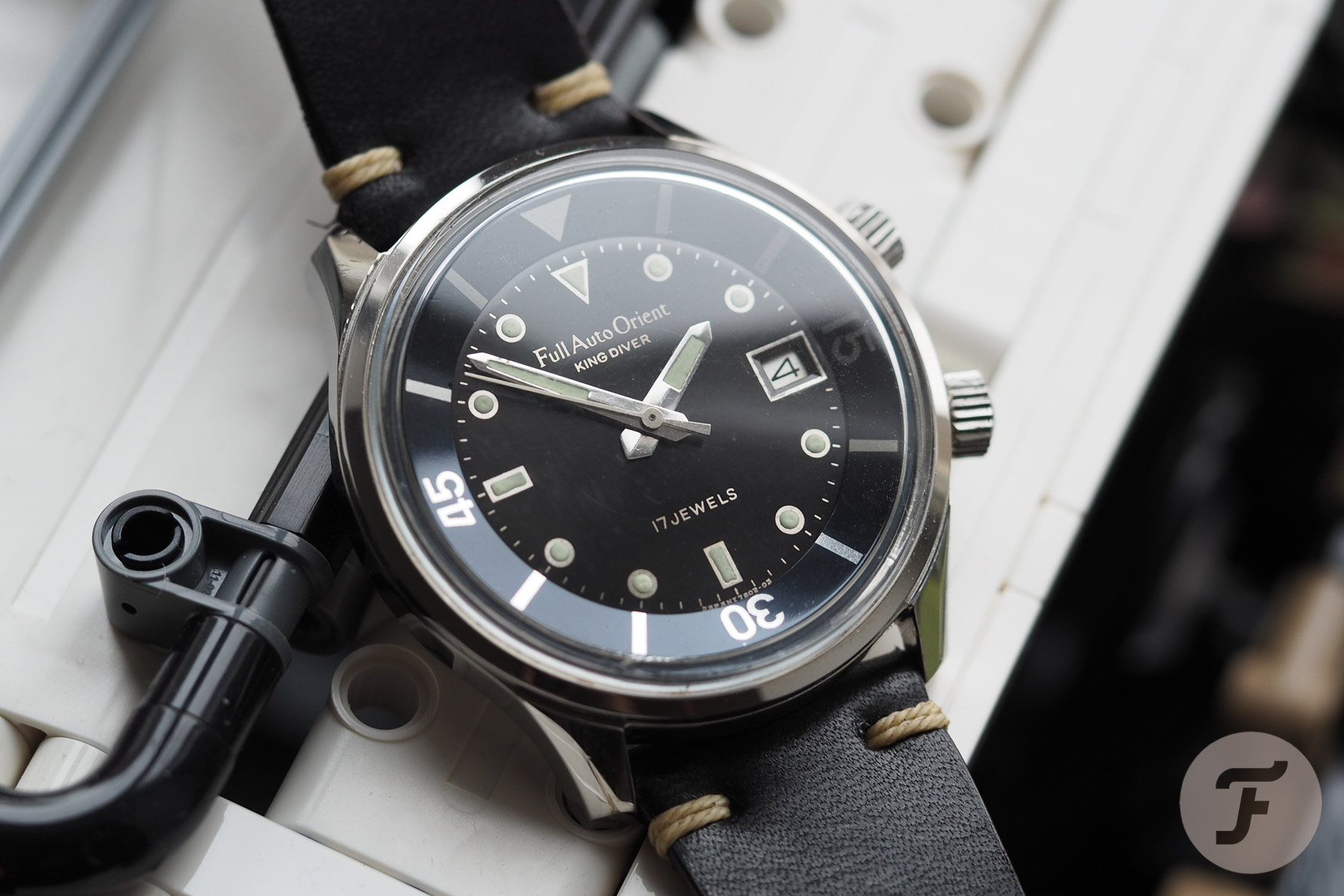 Made In and Sourced In Japan

Nice examples of the Full Auto Orient King Diver don’t come up for sale so frequently. Even in Japan, they’re relatively rare. Mine actually came from the land of the rising sun. I won it on a popular auction site, but you can see that it was also listed on the site of a local dealer. These early King Divers tend to fetch anywhere from $800-$1,200 and that makes them far more expensive when compared to later variants with their ridged bezels and ornate dials. Yes, some may view these Orients as pretenders but I see them as relevant additions to a collection of vintage Japanese dive watches. Learn more about the history of Orient here.

Hot Topics
Introducing: The New Seamaster Professional 300M 60 Years Of Bond — With A Special Animated Case Back
103 comments
Are You Still After An Omega × Swatch MoonSwatch?
78 comments
It’s Time To Invest In A Dress Watch — Our Picks From Breguet, Omega, Grand Seiko, And More
71 comments
Sunday Morning Showdown: The Tudor Pelagos Provocation — Pelagos Vs. Pelagos 39
55 comments
The Rolex Waitlist Conundrum — How Much Will The Price Of Your Watch Increase While You Wait?
48 comments
Popular
Hands-On With the Seiko Prospex SRPC91K1 – Save The Ocean
Robert-Jan Broer
15
Speedy Tuesday – Olympic Games 2020 Speedmaster For the Japan Market
Robert-Jan Broer
3
Why Are There No Stainless Steel Rolex Watches Available?
Robert-Jan Broer
121