Today on #TBT, we’ll take a look at one of the more legendary tool watches in the Glycine Airman. It’s a watch that I’ve always desired, but, for one reason or another, never purchased until only recently. Even then, I wound up with the watch before you by accident – more on that later – but boy am I glad I did. The Airman is a great watch and for a piece so well known, it’s still relatively easy to find and – shhh – it’s downright affordable! Let’s take a look… 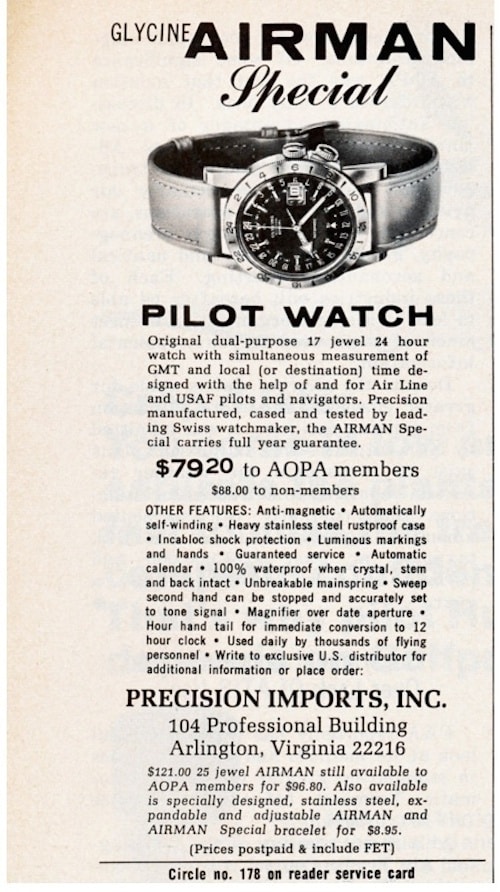 History of the Glycine Airman

Much has been written about the history of the Glycine Airman, so I won’t recount the gory details. The long and short of it, though, is that the watch came to be after a Glycine sales manager spoke with a pilot during a flight and received feedback on what would comprise the perfect pilot’s watch. The primary “ask” was for a 24-hour dial complete with an hour hand that only rotated around the dial once per 24 hours. Furthermore, a rotating 24-hour bezel was part of the request. Of course, hacking was in order as well for synchronization: an important feature for military personnel. And so, in 1953 – the same birth year as another famous tool watch: the Rolex Submariner – the Airman was introduced. With only a gap during the 90’s, the Airman, in one form or another, has been produced ever since (check out the recent reissue on Glycine’s official site). 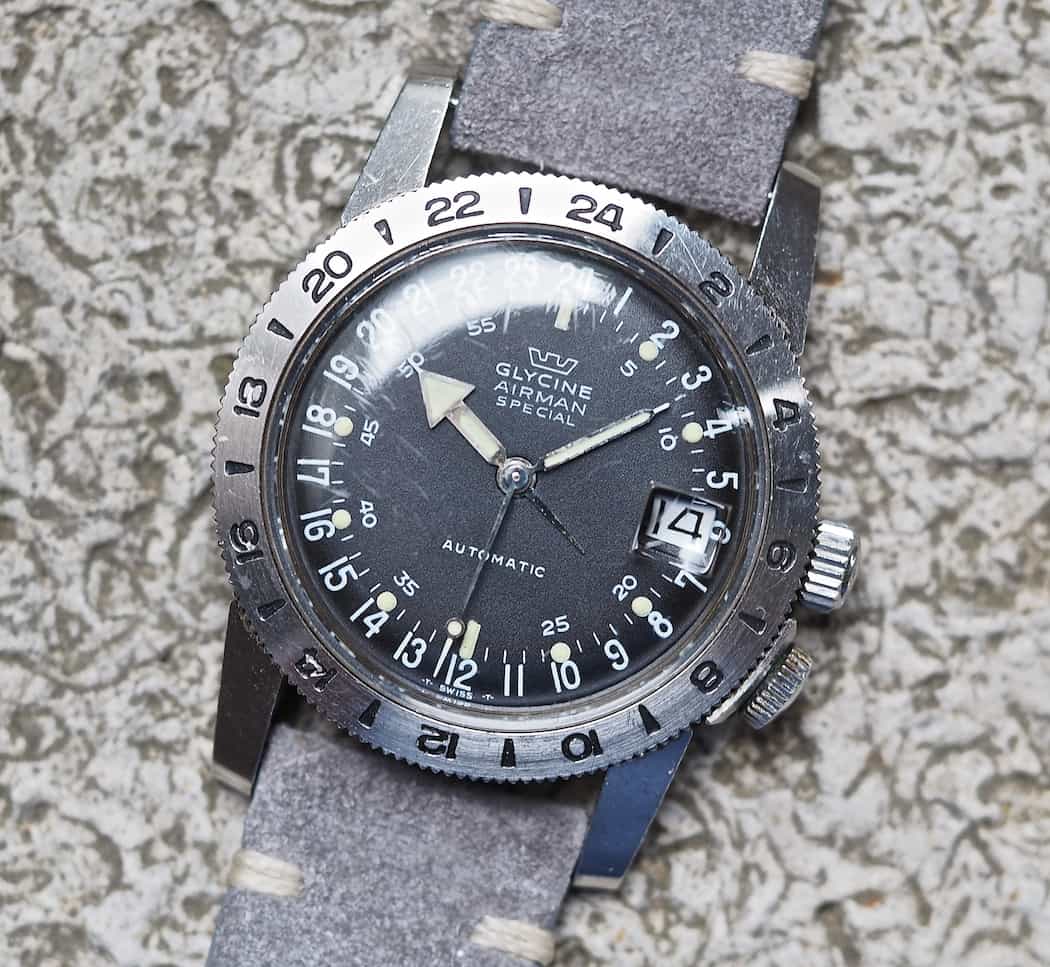 The Glycine Airman: a true icon used by many US soliders in the Vietnam War

To say there are fans of the Glycine Airman would be a gross understatement. There are several sites and dedicated forums on the web dedicated to the watch and denoting its history. Have a look as they’re all in relative agreement about the chronology of the many changes in movement, dial variants and cases over the history of the Airman. Another reason for the deep following for the Glycine Airman was its apparent widespread use by US helicopter pilots during the Vietnam War. Speaking of the USA, it’s interesting to note that the country was a huge buyer of the Airman. It’s also interesting to note that prior to the very late 1960’s, the land of the “free” imposed a tariff on imported watches based upon the number of jewels in the movement. Therefore, the brand made both a Glycine Airman with 25 jewels and a “Special” with 17 jewels. The watch before you is a Special made for the US market and contains an A. Schild ref.1903 automatic movement. Oddly, it doesn’t seem to differ much from its 25 jewel relative other than being a lower cost option and, likely, less durable. It runs at 21,600 bph and from my brief experience, it keeps ridiculously accurate time. 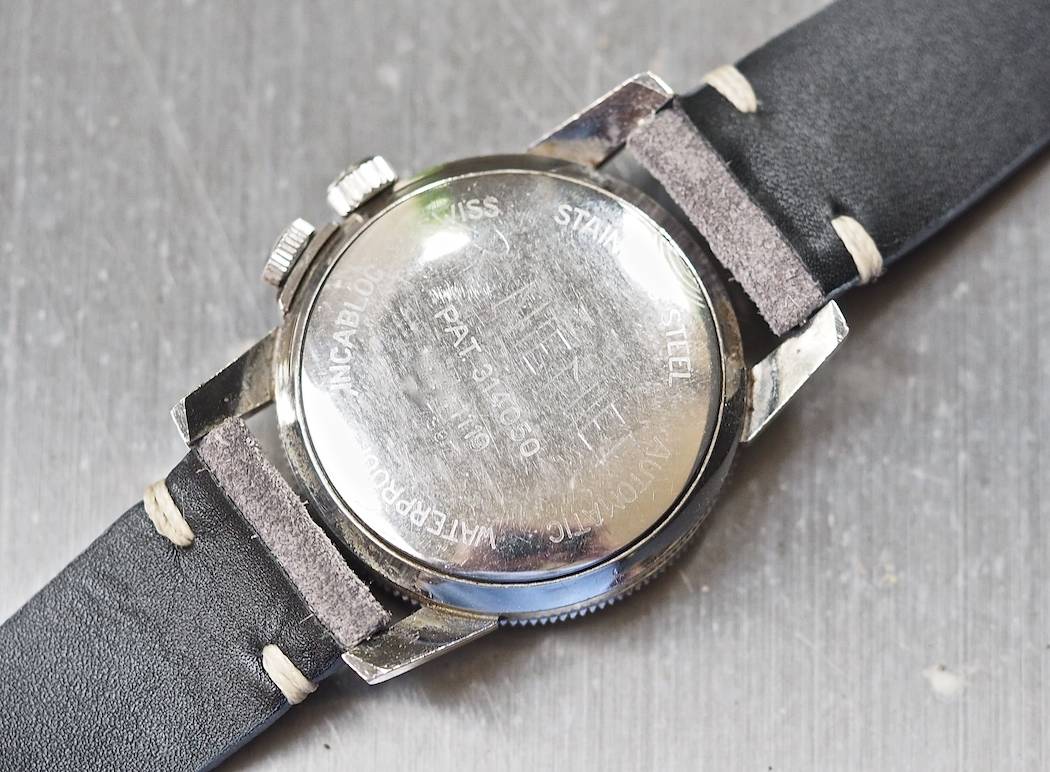 The Glycine Airman has an EPSA compressor case

Roughly 2 years after its release, in 1955, the Glycine Airman moved into the recognizable case style on this page. Originally, though, it contained a screw back design, which transitioned to a snap back in 1963. My watch is actually from 1968, so it contains the latter. A funny story about this, though, as the watch shipped with what I thought was a closed case. Well, it wasn’t closed and after struggling with trying to close the watch for the better part of an hour, I asked my Dad (yes, no matter how old you are, Fathers still have super human strength) and he was able to seal the deal. What you should know about these pieces is that they are actually EPSA-made compressor cases and a further clue is the oft-replaced crosshatched crown. 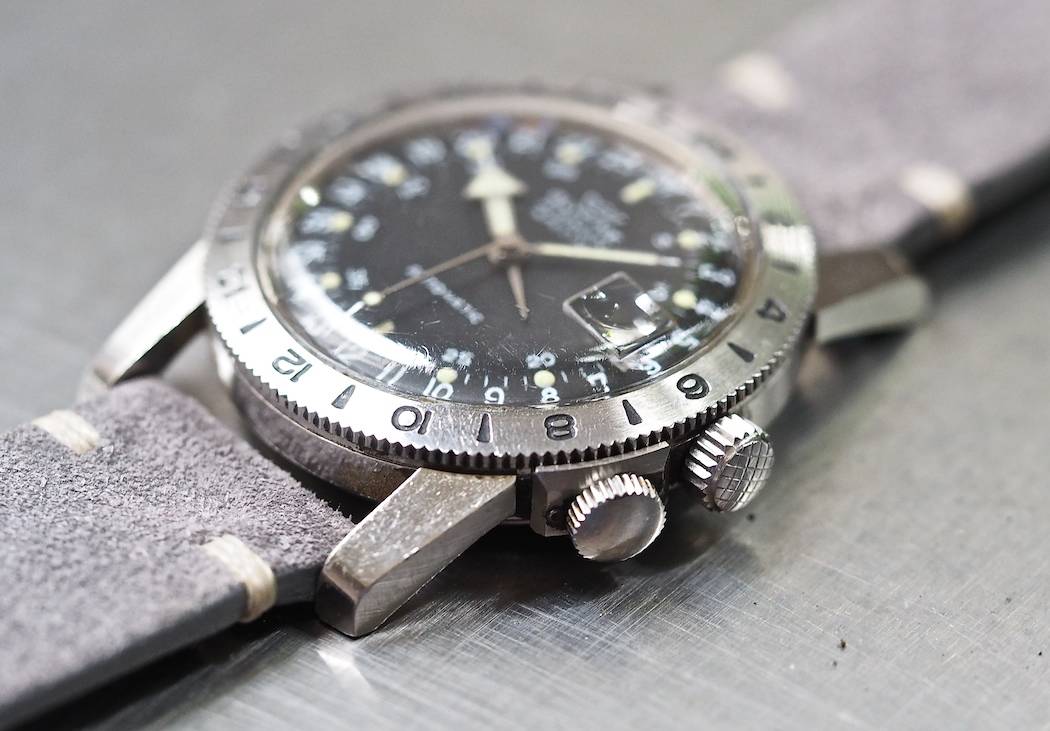 The massive lugs of the Glycine Airman and those great crowns

Before we move onto the funky crowns on the Glycine Airman, let’s spend a little longer on the case design. The watch comes in at roughly 36mm in diameter and has a lug width of 20mm. The lugs themselves, though, are MASSIVE. Honestly, they’re a bit disproportional to the case size, but they’re a real hallmark of the Airman’s design. Note also how they don’t join the case smoothly on the outer edges and you’re left with a form that adds just the right amount of character. I’ll also take a moment to discuss the bezel. It rotates once the lower crown is unscrewed and is basically locked down once the crown is screwed back in. It’s a really nicely made piece that even reminds me a little of later Rolex Explorer II bezels. 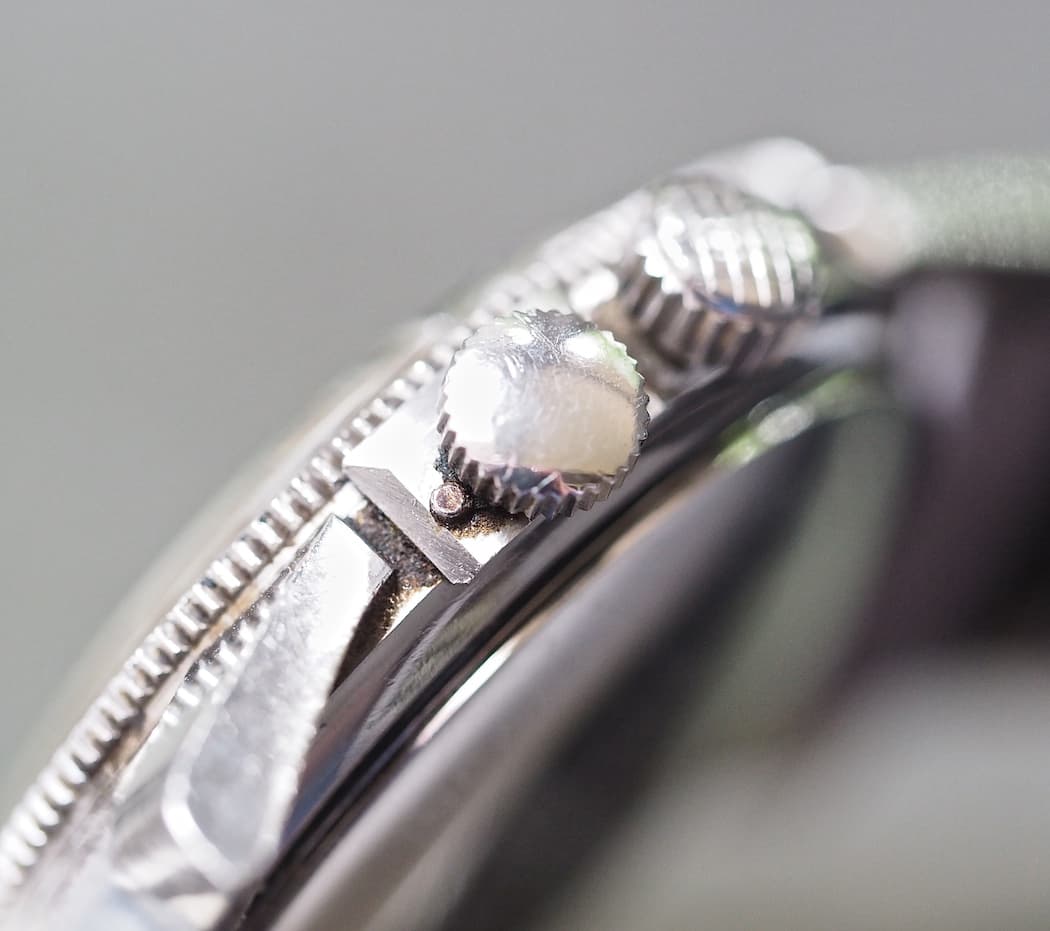 The Coolest Hacking Feature Ever?

Speaking of crowns on the Glycine Airman, I mentioned the lower crown and its function as a bezel lock. It goes unsigned and is thinner than the upper crown. It sits on what looks like a shim and, honestly, it apes some sort of military equipment. It’s one of those vintage oddities that would clearly never make it into a brand new design. 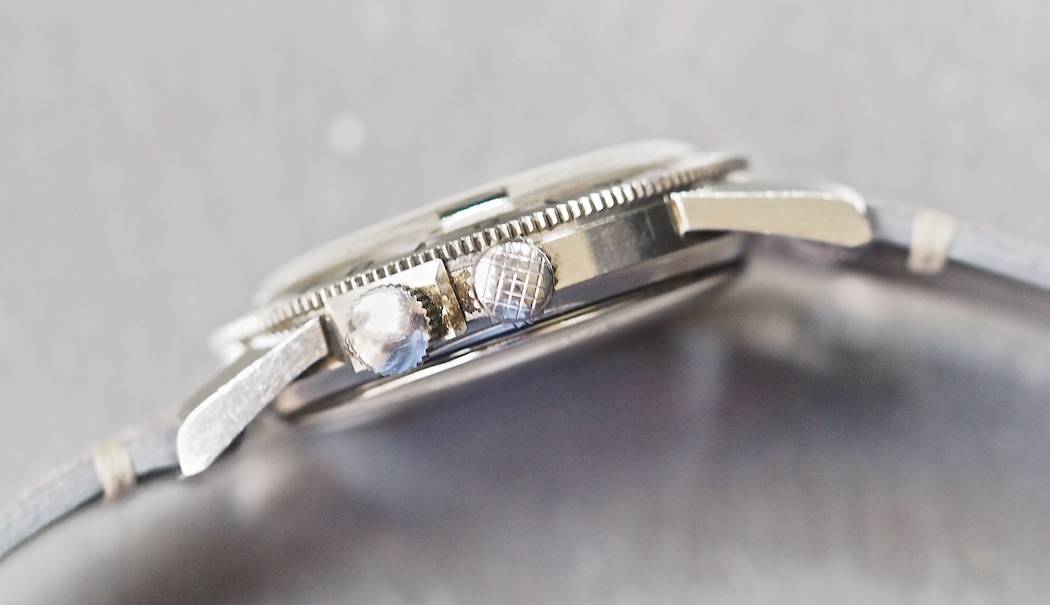 The upper crown, as mentioned, carries the EPSA signature cross hatches and is a simple pull out crown. As this model is pre 1969, the crown not only sets the time, but also triggers one of the coolest features in watchdom. Weirdly, Glycine chose a hacking solution unlike any I’ve seen and it comes in the form of a very thin wire. 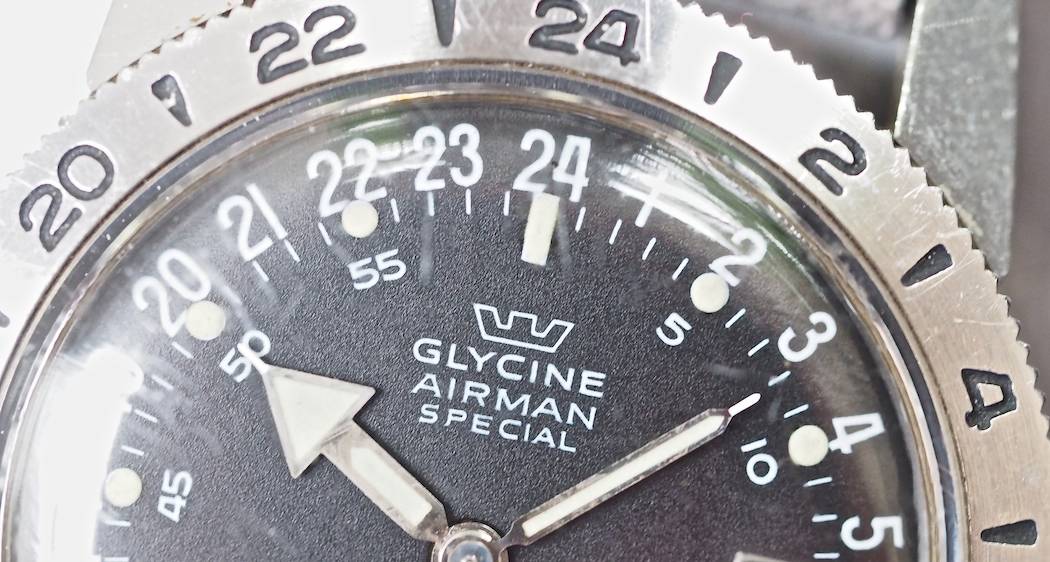 It’s not easy to see on the Glycine Airman, but note the little hole betwen the 2 and 4 of “24” on the dial where the wire comes through

When pulling out the upper crown, a lever actually pushes a piece of wire up through a hole between the 2 and 4 of the “24” on the dial. Then, you wait – and wait – up to a maximum of 59 seconds until the sweep seconds hand makes its way around to “24” only to be stopped by the protruding wire. It’s mechanically simple, but, alas, it’s a feature that so often is missing on “for sale” pieces due to failure or watchmakers that mistakenly removed it. For me, finding an Airman with this is a must. 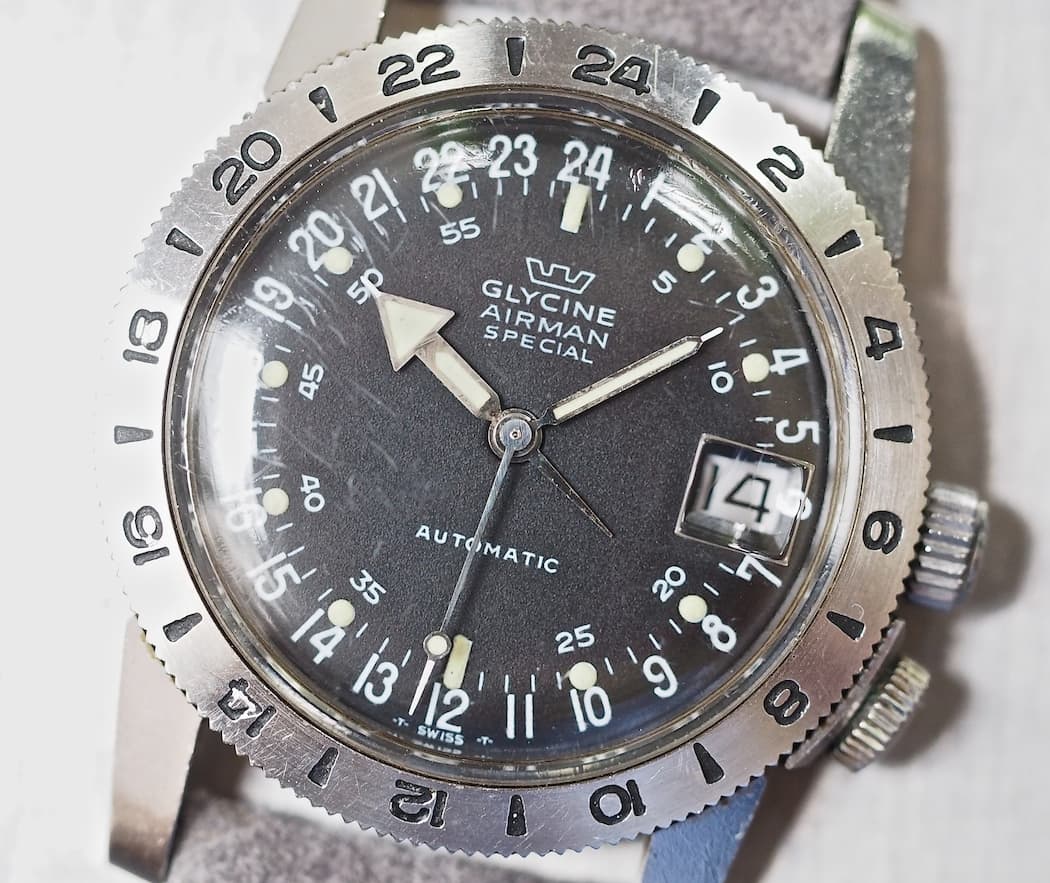 The Glycine Airman has a True 24-hour Dial

Coming to the lovely matte black dial of the Glycine Airman, we see all kinds of writing because every single hour, aside from those eschewed by the date window, is shown. It contrasts with the bezel, by the way, where every other hour is denoted. The date window is black font on white to provide some healthy contrast and it’s magnified by a flush Cyclops in the low-domed acrylic crystal. Coming to the hands, they’re of a purposeful and functional design. In fact, in 1957, Glycine added a “tail” to the lume-filled, arrow-shaped hour hand in order to help the wearer read the time in 12-hour format if he so chose. The minute’s hand is a simple lumed syringe and the sweep hand needle-shaped with a lollipop before the end. The whole design is at once very detailed, yet very vintage and rudimentary. 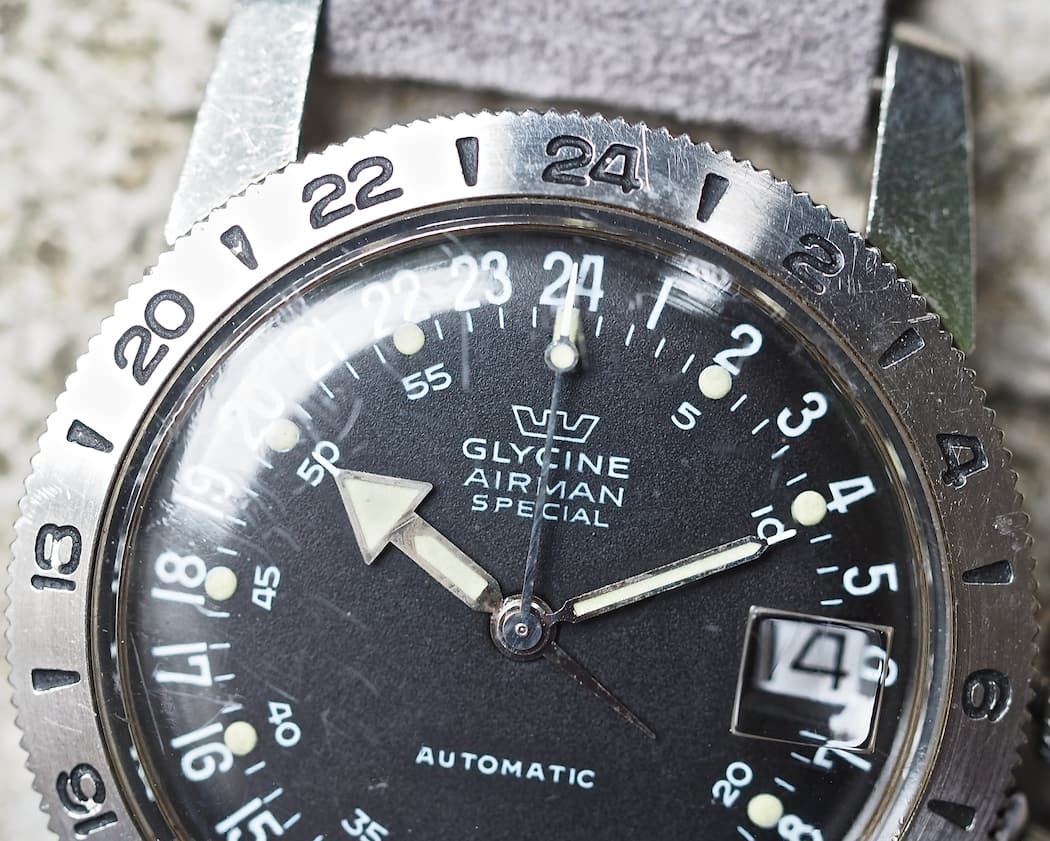 When I mentioned that I came upon this watch accidentally, it was essentially what I’d call a redirect. I was chatting with a good friend, @borisparis75, and he mentioned that he was going to purchase the Glycine Airman and he ultimately did. However, days later, he found another, entirely different watch and wanted to free up funds in order to afford it. So, the Airman was offered to me and I jumped at the chance. To be honest, I’d never held one and didn’t really know what to expect as far as size, quality and feel. In the end, I was pretty surprised. 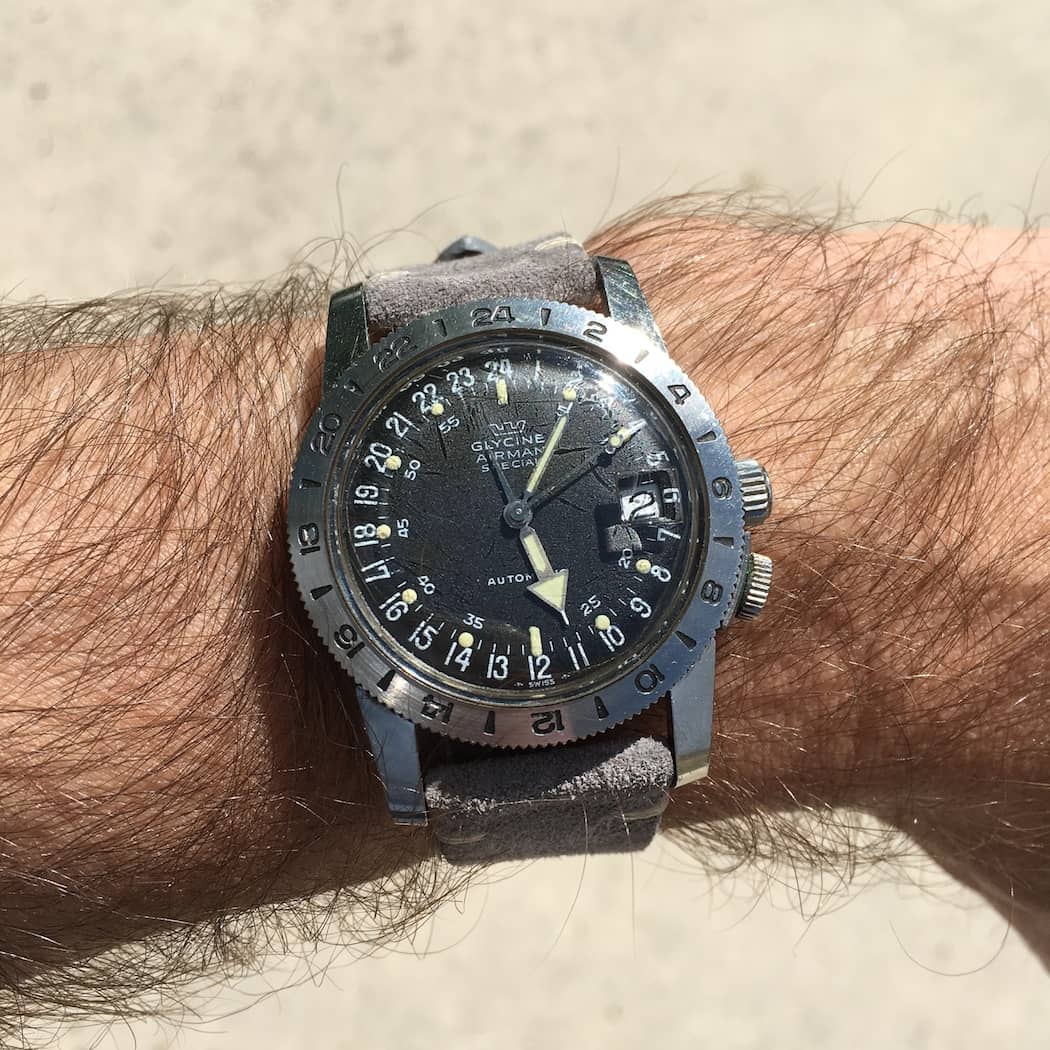 Wearing and Finding a Glycine Airman

The Glycine Airman is not a big watch, but it’s not terribly small due to its bezel and big lugs either. It is, however, deceptively thin and does feel roughly like 36mm. However, it is easily one of the most comfortable vintage watches I own. Quantifying this is difficult, but I think it owes this wearability to its lack of heft and the fact that it slips under a shirtsleeve so nicely. Presence? I actually think it has great wrist presence because of its details but it’s certainly not overpowering. Using it daily wouldn’t be out of the question and judging by the condition of the crystal on mine, I’m guessing the prior owner did just that for many years. Like on another recently reviewed 24-hour watch, though, in the Breitling Cosmonaute, getting used to time telling would be a hurdle. 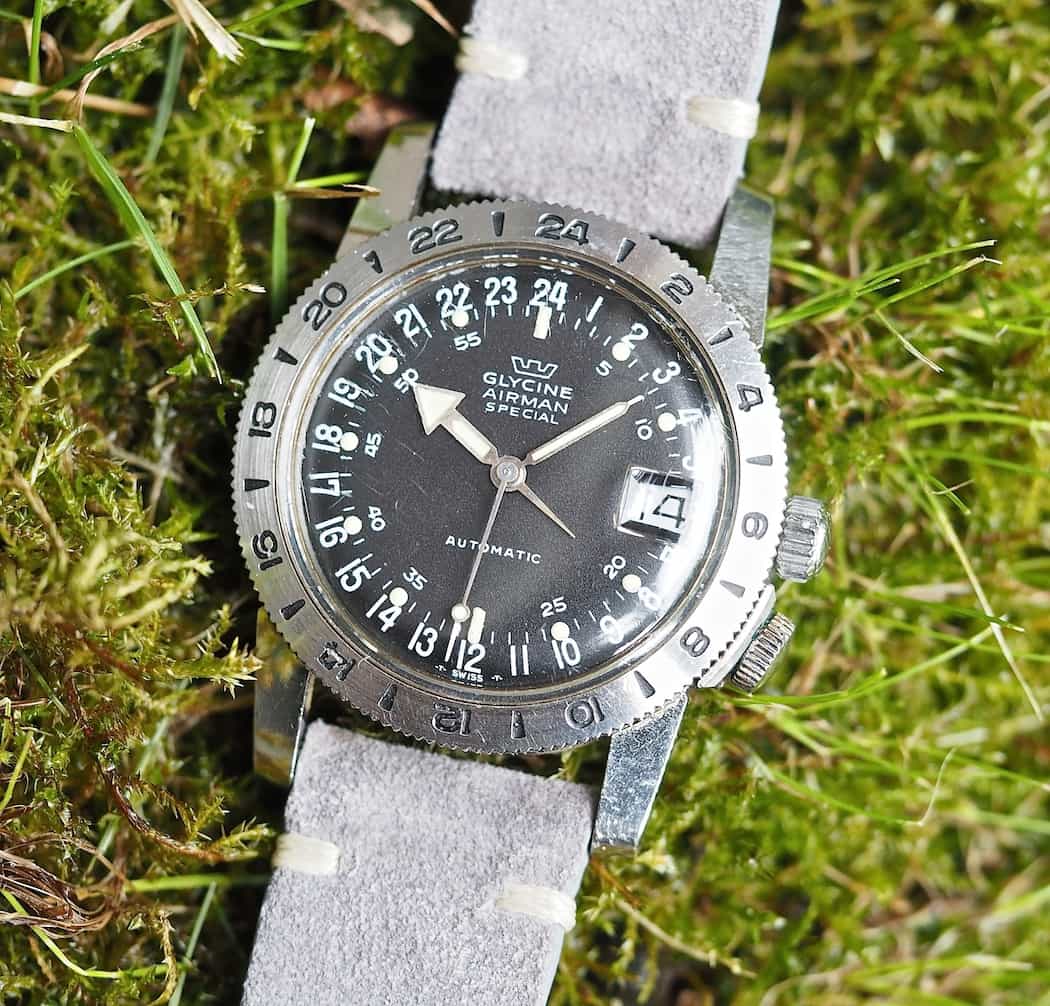 Tritium lume fills the hands found on the Glycine Airman

I kicked off this article telling you that the Glycine Airman, despite its popularity and legend, is very affordable. In this day and age of crazy pricing, what does affordable mean? Try below $1000 for some versions and you’re on the right track! See? Of course, you can also spend nearly double that for very early or perfect pieces containing their original wood boxes that look as if they could carry military grade ammunition. Things to watch out for are a working hacking feature, the correct crowns (head here for questions) and the right hands. Parts do show up from time to time but like everything else vintage, they’re becoming rarer. It’s also good to note that prior to 1967, the Airman did not feature the Glycine crown on the dial and used a far more vintage looking font with serifs. As much as I need another one of these watches like a hole in the head, I’d add an early model solely for that font…it’s similar to what you’d see on a Rolex. 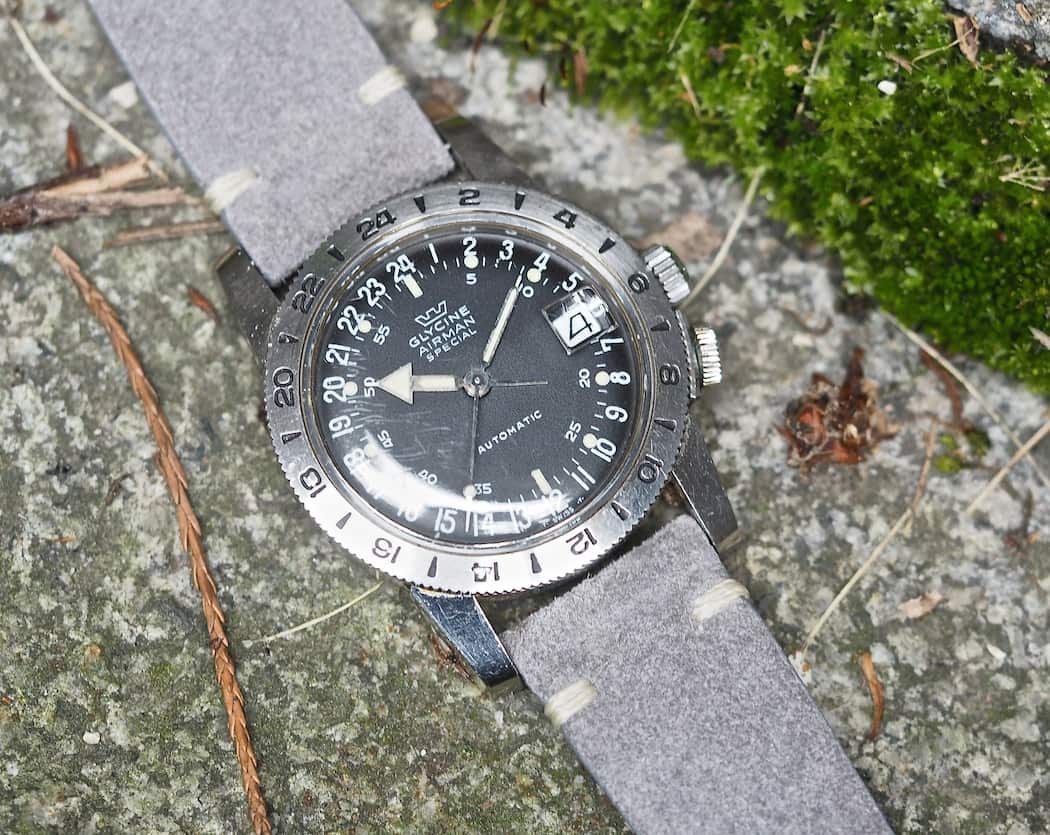 I’ve found the A.Schild automatic to be a great, accurate timekeeper in the Glycine Airman

I find myself wearing vintage chronographs most days each week, but on my “off” days, I’ve been grabbing the Glycine Airman more often than not. It’s an easy watch that works with everything and as I said, it’s just so darn comfortable. If you’ve seen the Airman before, but, like me, had never held one, I think you’d be pleasantly surprised provided you can get along with the size. If you’ve never seen an Airman before and are now intrigued, welcome to a possible addiction! Until next week…

I’ve found the A.Schild automatic to be a great, accurate timekeeper in the Glycine Airman

Tritium lume fills the hands found on the Glycine Airman

The Glycine Airman: a true icon used by many US soliders in the Vietnam War

The massive lugs of the Glycine Airman and those great crowns

It’s not easy to see on the Glycine Airman, but note the little hole betwen the 2 and 4 of “24” on the dial where the wire comes through

Hot Topics
Introducing: The New Seamaster Professional 300M 60 Years Of Bond — With A Special Animated Case Back
105 comments
Are You Still After An Omega × Swatch MoonSwatch?
97 comments
It’s Time To Invest In A Dress Watch — Our Picks From Breguet, Omega, Grand Seiko, And More
73 comments
Introducing: The Oris Divers Sixty-Five Fratello Limited Edition
62 comments
The Rolex Waitlist Conundrum — How Much Will The Price Of Your Watch Increase While You Wait?
50 comments
Popular
#TBT A Vintage Seiko Buyer’s Guide to Affordable Goodness
Michael Stockton
32
Why Are There No Stainless Steel Rolex Watches Available?
Robert-Jan Broer
121
Hands-On With The Seiko SLA019J1 Marinemaster
Robert-Jan Broer
4