Today on #TBT we’ll talk about a watch that’s become a real easy “go to” piece – one that looks good with just about everything because it looks so good – the Hamilton 600 diver. Hamilton is a brand I like to feature because of its historic link to Lancaster, Pennsylvania: a place where I’ve spent a lot of time. However, it’s not just the American tie but it’s also the fact that the brand made some really nice watches that exercised a high level of constraint in their execution as well as what I’d call quiet confidence. Hamilton was such a powerhouse at one time in the United States that even though they were flagging by the late 60’s and the onset of the quartz/Japanese invasion, they still designed watches with a simple boldness. I’ve covered a couple fitting examples with their entry in the Cal.11 automatic stakes and a later “big eye” chronograph. Today’s #TBT focus, although not a big watch, in the 600 diver is no less proud design-wise. Let’s look closer… 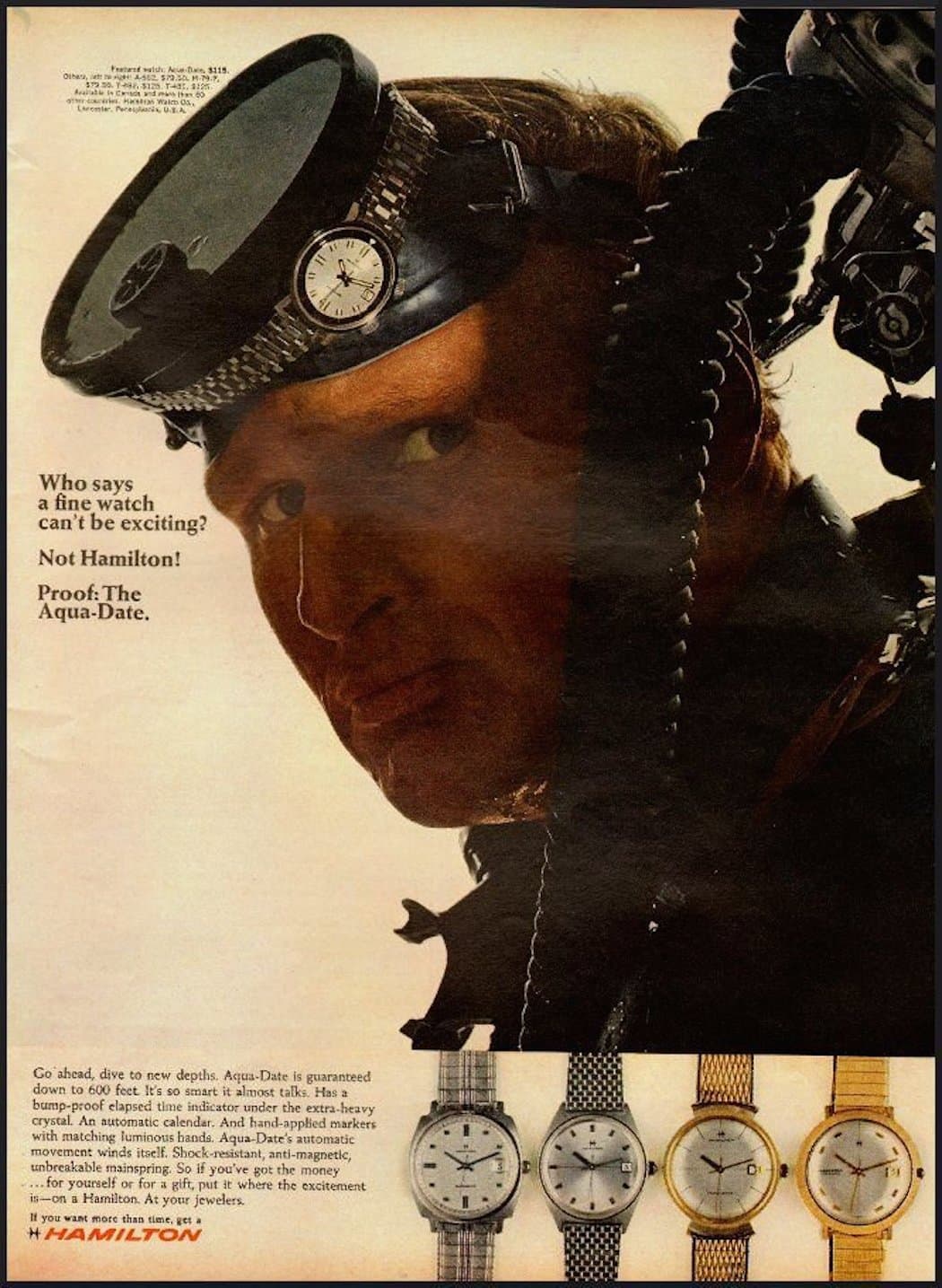 Some background on the Hamilton 600

The Hamilton 600 diver was produced in roughly 1967 and seemed to be around for several years and encompassed several variants. The variants were subtle and really only referred to slightly more or less verbiage on the dial and these words actually gave the watch names such as “Cape Horn” and “Aquadate”, but the most common version simply stated “automatic” (even this could be placed above or below center). Regarding the automatic designation, the Hamilton uses a 64A movement (aka, the ETA 2452). It features a non-quick set date and has a power reserve of 42 hours. The watch itself has a full stainless case made by the famous brand EPSA and features a super compressor style of closure. With this, the watch has 600 feet of water resistance and a rotating internal bezel operated by the upper crown. The size – a relatively dainty 36mm in diameter with 18mm lugs. Still, though, I’ll attempt to convince you that this watch is more significant than its size would suggest. 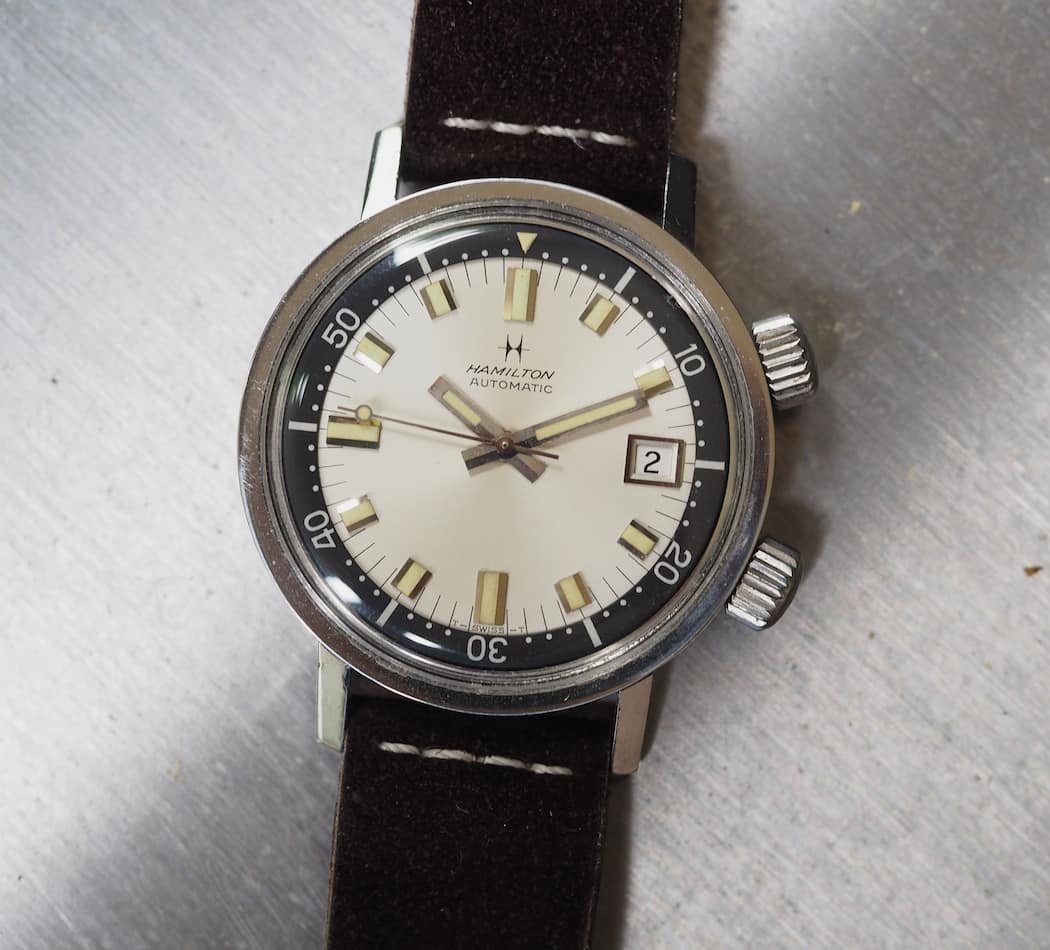 A bold, simple dial and a thin bezel help give the Hamilton 600 more visual weight than its 36mm would suggest

If you’re a fan of super compressors, then the Hamilton 600 won’t be unknown to you. However, if you’re not, a quick look on the internet shows that most – from brands such as Wittnauer, Bulova and the like – came with black dials and bold, printed lume indices at the hours. A quick look at the Hamilton tells you that this watch brings something a little different to the party: a white/silver dial. It’s this that really gives the watch striking looks and great contrast. Plus, as they say, everything looks bigger in white. 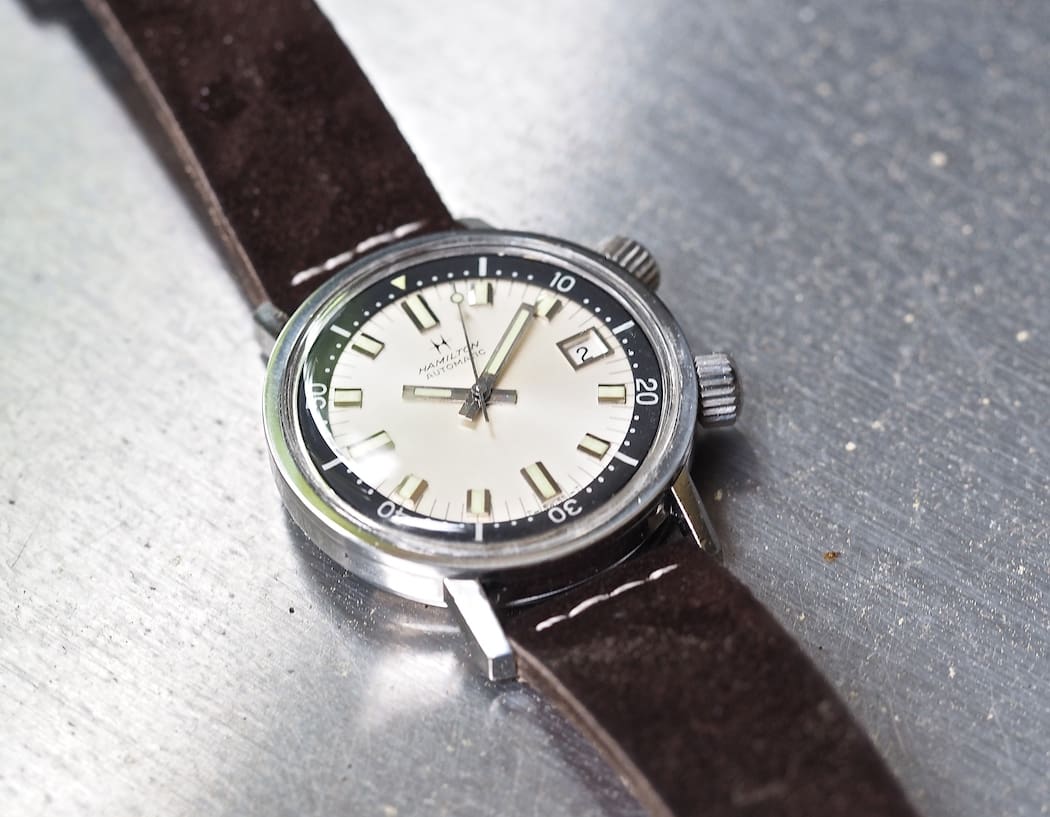 Great detail exists on the Hamilton 600

In comparison with other EPSA divers, the Hamilton 600 also brings in some other nice features. Personally, I really like the addition of applied indices as they match well the stubby rectangular hands and applied date window surround. Then, in order to bring back just a touch of delicacy, a lovely sweep seconds hand is employed with a finely detailed, lume-filled lollipop near its end. The rotating bezel comes in black but is also topped off with a lumed triangle at its start point. 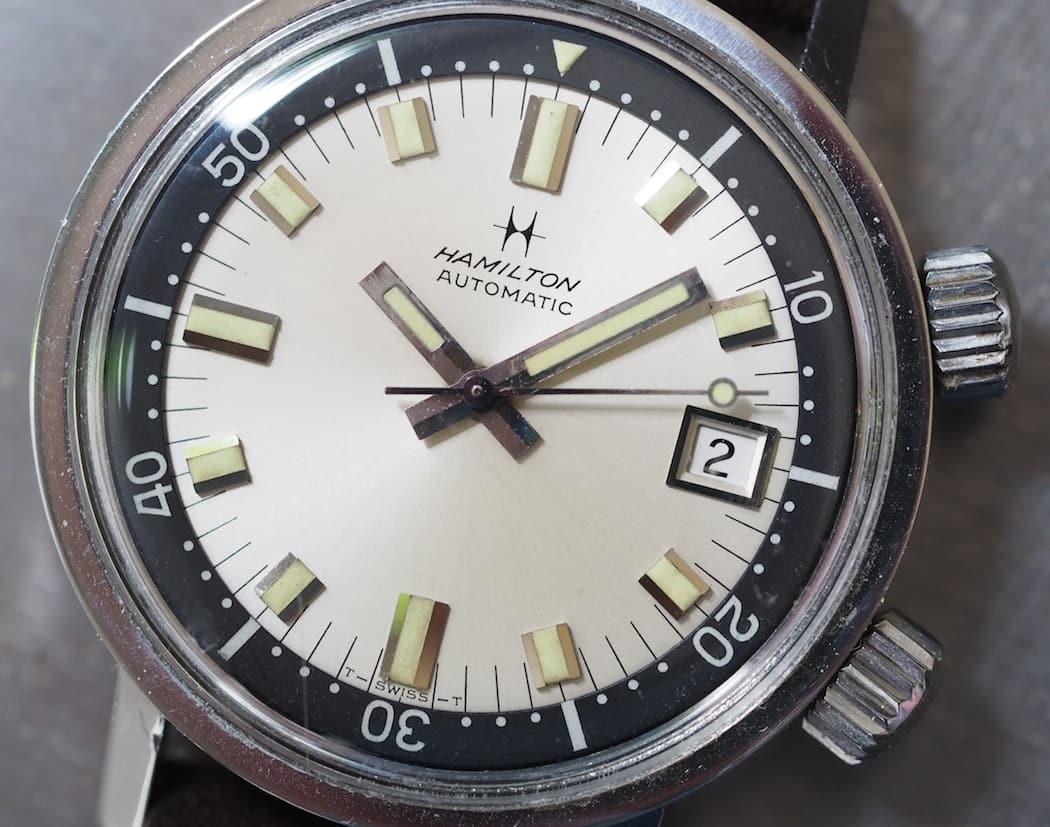 A macro of the beautiful Hamilton 600 dial

Let’s also not forget the Hamilton name and logo in printed script; it’s still one of my favorites in watchdom due its sheer simplicity. Yes, this dial is simple but it contains many starkly contrasting details. It all adds up to a very legible, but noticeable watch dial. 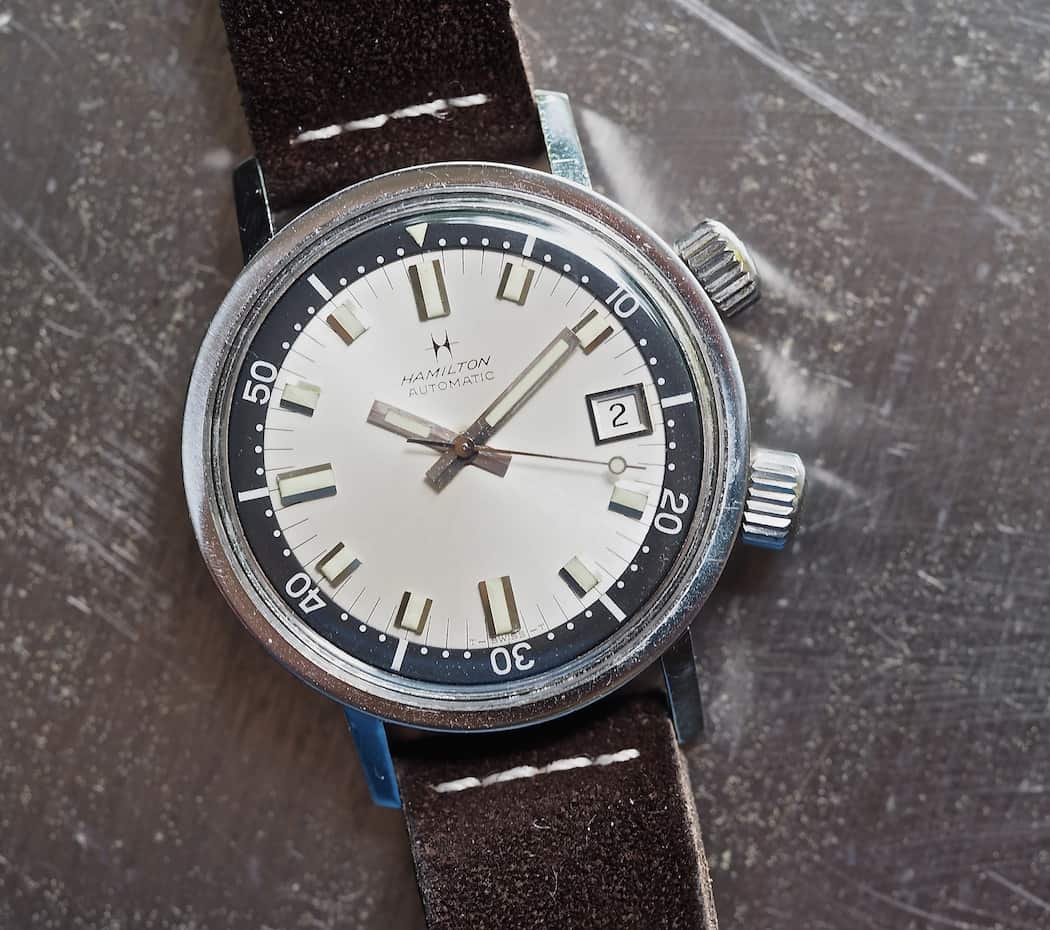 The case on the Hamilton 600 is extremely simple and like in all super compressors, I find the big, cross-hatched crowns to come off as real character builders. They border on ridiculous, but in the end, they’re convincing as extremely utile tools – diving gloves would have needed to use the upper one for sure. There’s not much to say about the case on the Hamilton as it contains simple, thin lugs and a basic round shape with a very slim bezel. There’s nothing superfluous about it and the lugs, strangely are slimmer than most that are on 36mm EPSA cases. 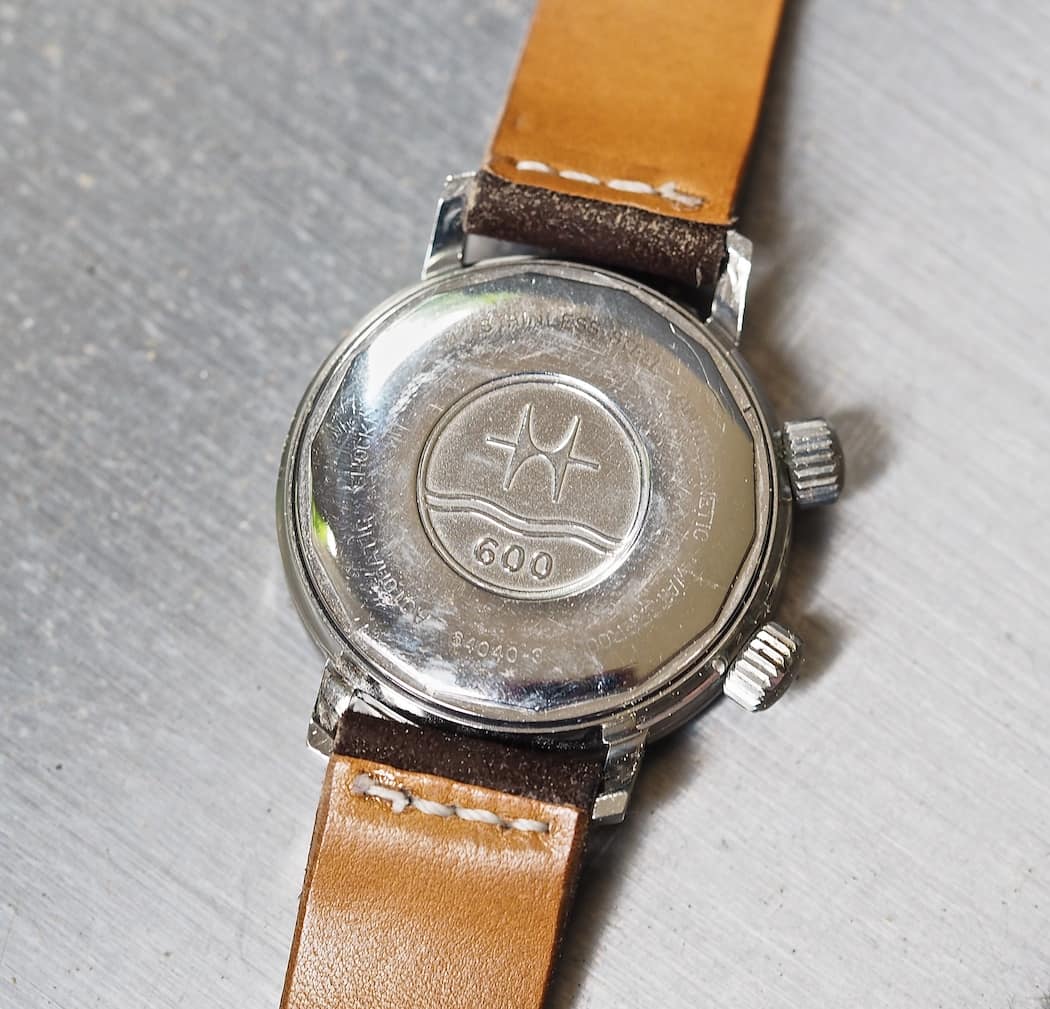 Flipping the watch over reveals a nicely decorated case back with some details about its water resistance. 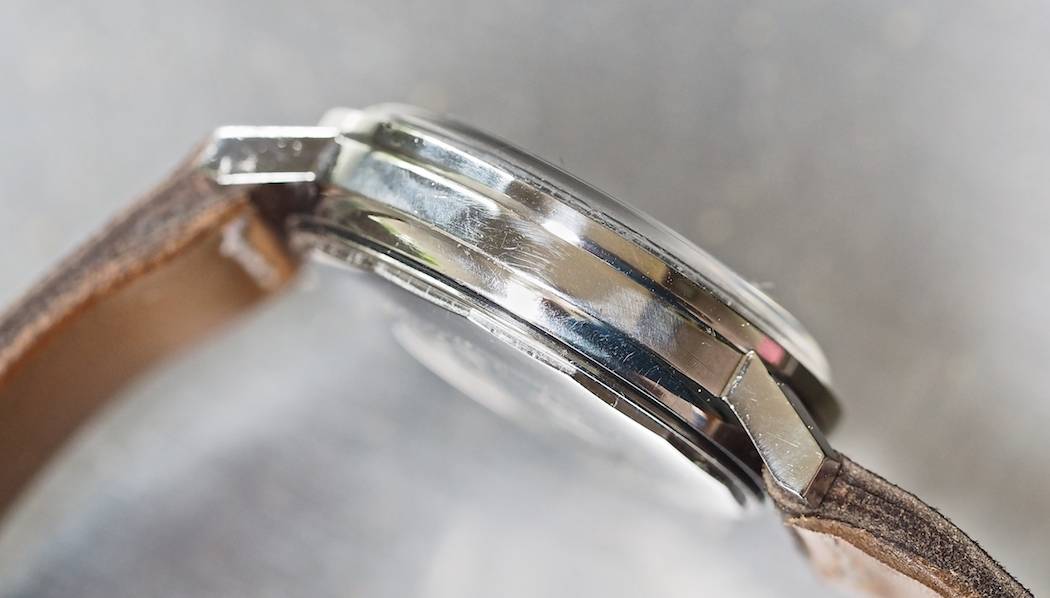 From a side view, I find that all of the Super Compressors I’ve seen have a real trademark – it’s a concave ridge that connects the case side to the case back. Something about this ridge gives off the look of solidity. Yes, a small detail but I guess this is the stuff that I notice. 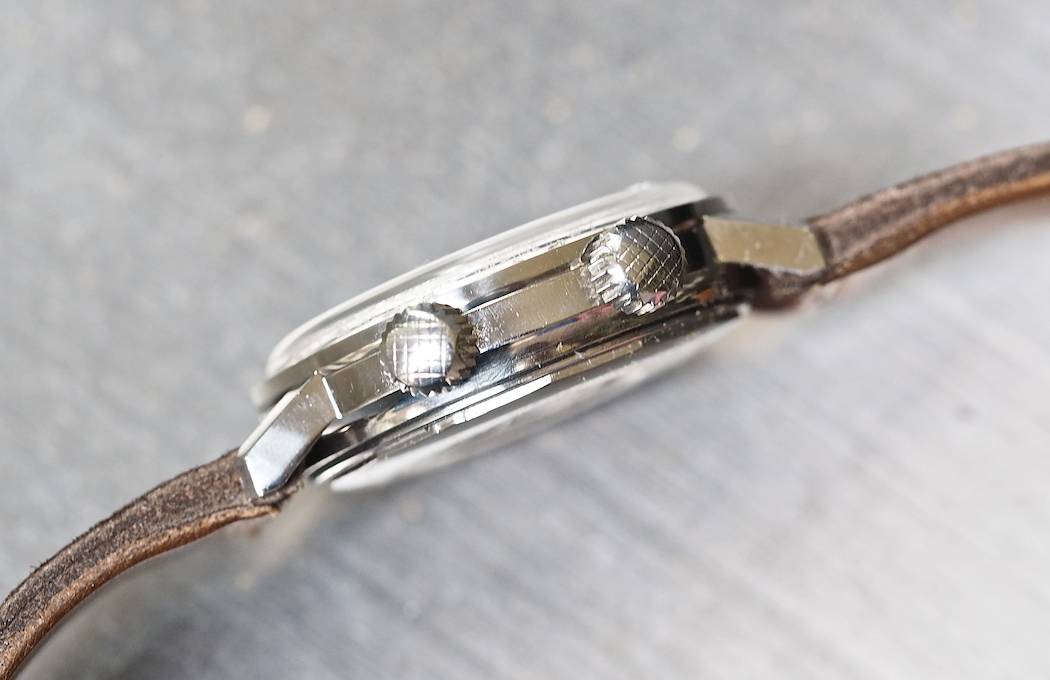 I had long looked for a Hamilton 600 at a fair price, but pieces I saw either had problems – stained dials or rotten lume being the most typical – or they were priced prohibitively. The piece before you is in excellent condition and the lume even blazes for a few seconds when taken to the dark. The other notable feature it came with is the desirable JB Champion stainless bracelet. I didn’t picture it as, honestly, I am struggling to size it. It’s a wonderful looking bracelet but odd spring loaded pins hold the links together that I cannot seem to dislodge – I’ll provide an update at some point. So, yes this watch arrived in great shape and was purchased for $700. From what I’ve seen, they now tend to sell in the $1,000 – 1,500 range and it’s a watch that seems to be gaining in popularity. 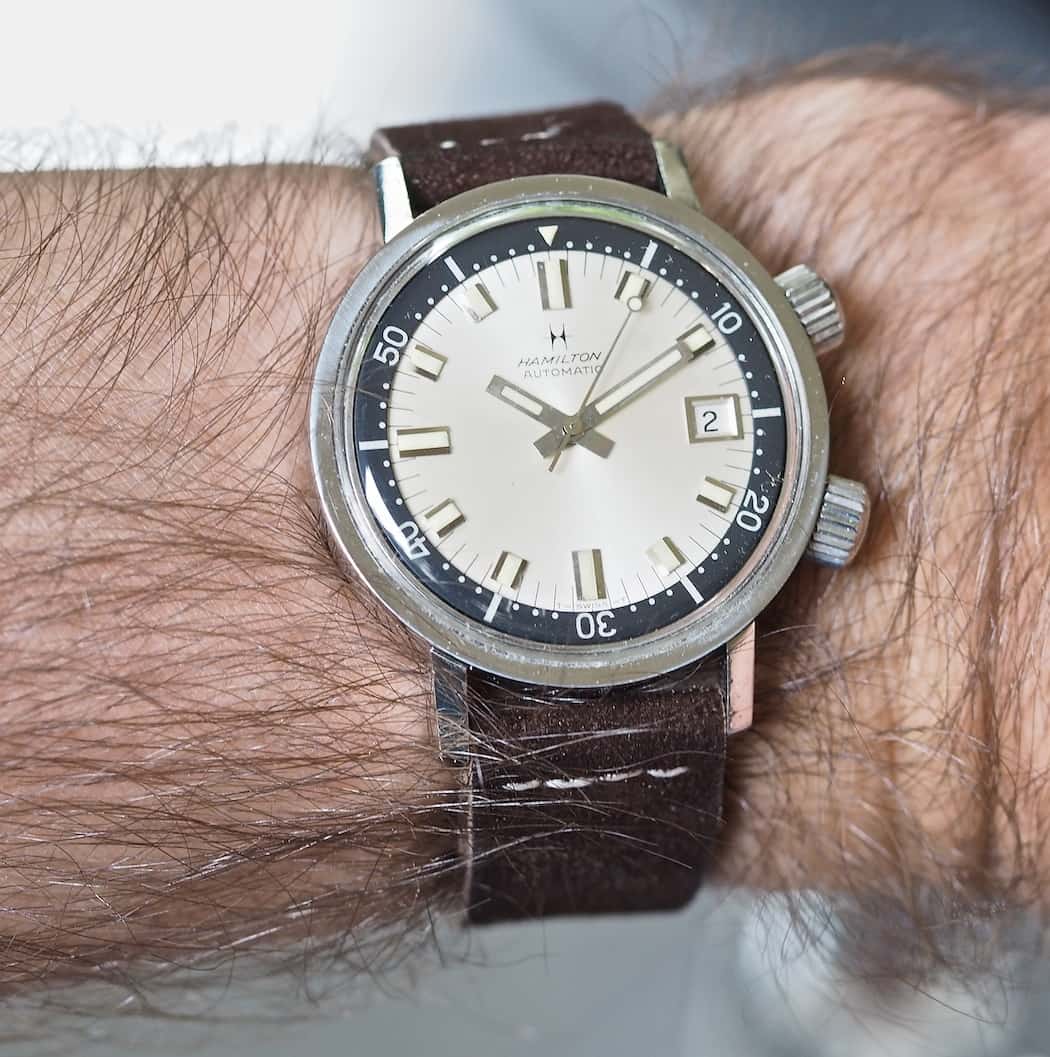 The Hamilton 600 on the wrist…a really comfortable wear

You’ll note that I’m wearing the Hamilton 600 on a brown suede strap (from Giuliano) and I find it to fit the old diver perfectly. As mentioned, it’s not a huge watch but the long lugs and the light-colored dial give it larger looks. The positive, though, is that this watch wears very comfortably, isn’t extremely heavy, and fits under anything. Plus, it’s simple enough that it can handle duty in certain business environments. Like a trusty 36mm Rolex Explorer 14270 or IWC Mark XII, this 36mm Hamilton just wears well. If you’re looking to buy, try to find a good one that isn’t lacking anything as parts like crystals, crowns and hands have become difficult to impossible to source (crowns being the easiest). Furthermore, the smooth action internal bezel is essentially not fixable should the little teeth become worn. 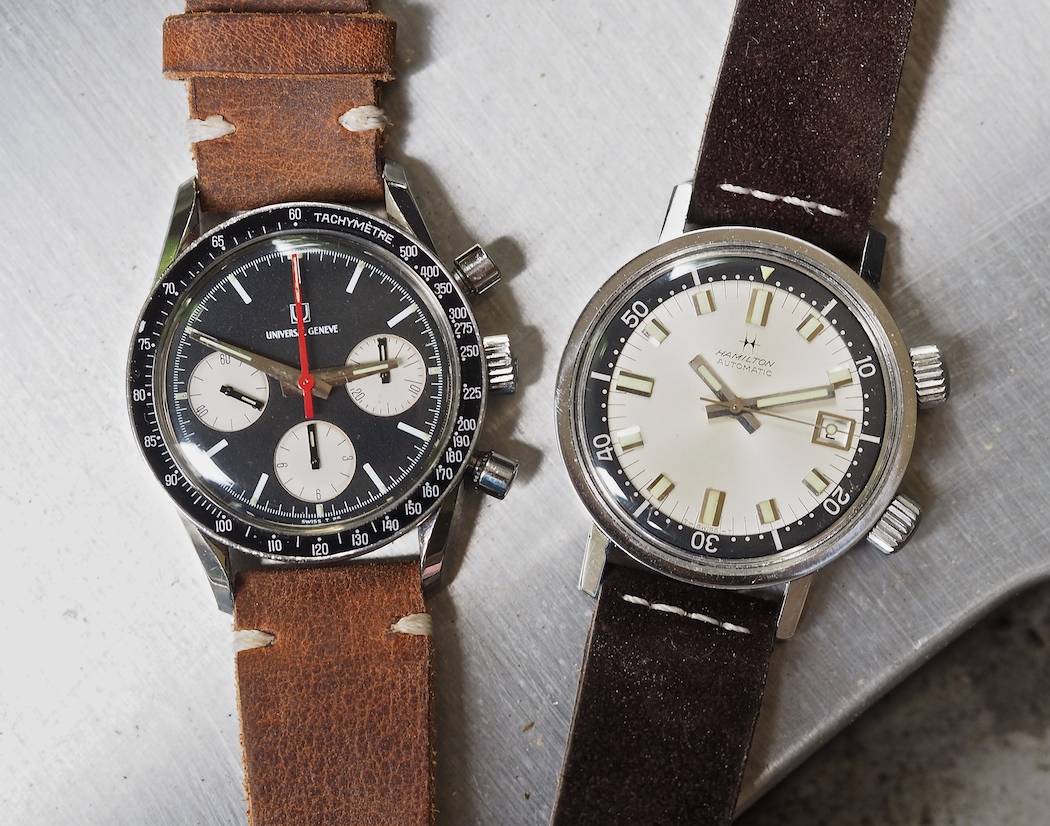 36mm can be powerful…here are 2 examples, the Universal Geneve Compax and the Hamilton 600

I certainly enjoy these twin crown Super Compressors and the Hamilton 600 is no exception. If you’re looking for a relatively affordable, but desirable diver from a known name with great build quality, I’d highly recommend giving one of these a shot. At 36mm, it might not be for everyone, but one thing is for sure, if you don’t like it, you won’t have any trouble in finding a new owner. Until next week…

The Hamilton 600 on the wrist…a really comfortable wear

A macro of the beautiful Hamilton 600 dial

A bold, simple dial and a thin bezel help give the Hamilton 600 more visual weight than its 36mm would suggest