There is hardly a better indicator of timeless design principles than the continued existence of those principles in the modern world. Here we have a watch that certainly gave the German manufacturer Junghans worldwide recognition. In today’s #TBT we have the OG Junghans Max Bill.

An architect, painter, sculptor, writer, typographer, graphic designer, and also an industrial designer. You can hardly find a museum that doesn’t showcase at least some pieces of his work. Max Bill, the man responsible for even heavy-weight collectors having great respect for this small German manufacturer. Max Bill was born in Switzerland and studied architecture at the Bauhaus school, Germany’s foremost school of design. Later on, he became its standard-bearer. 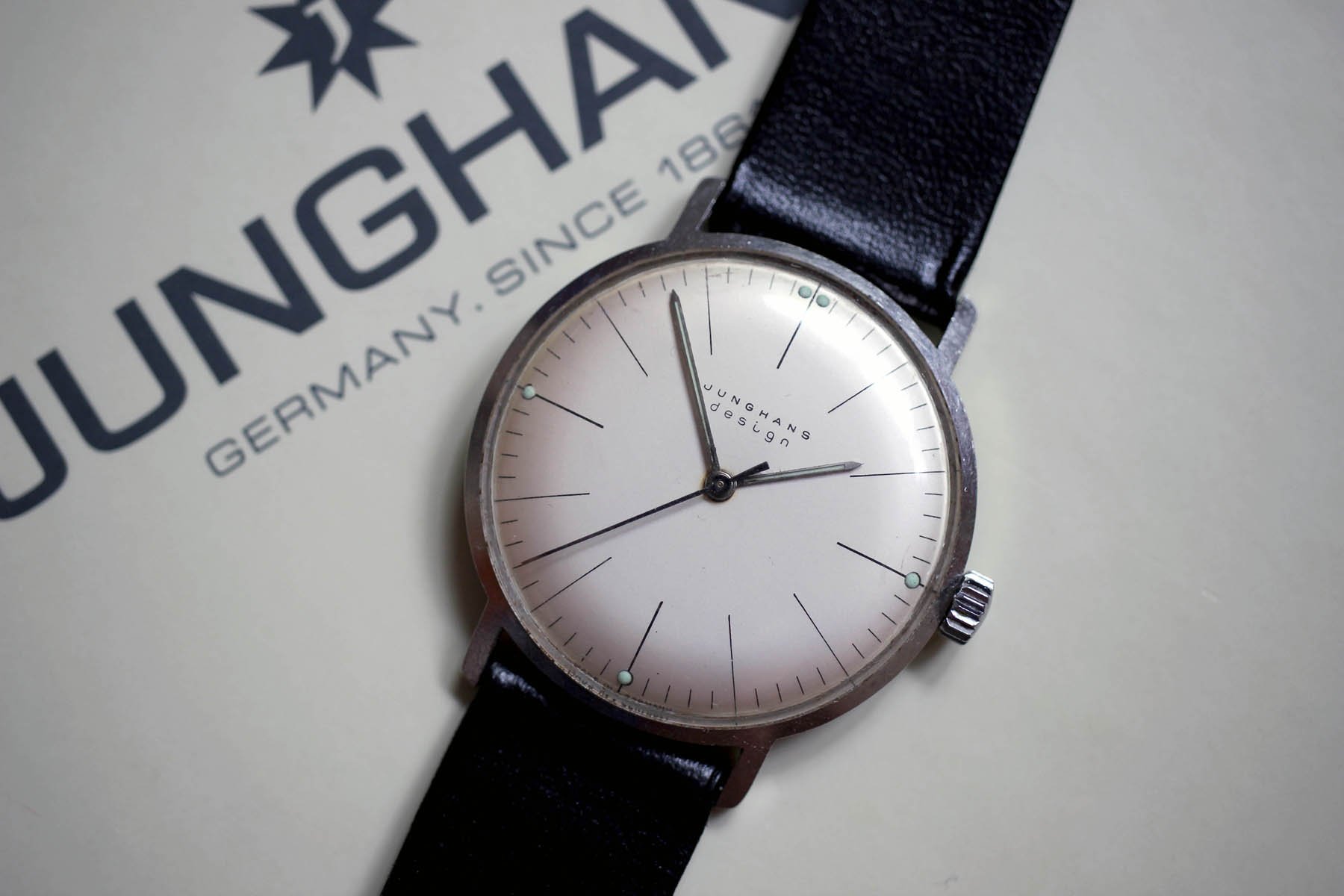 In the early 1900s, fine arts such as architecture and design were both held in higher esteem than simple craftsmanship. Bauhaus brought a vision of bridging the gap between art and industry by combining crafts and fine arts. They saw economic sensibility, simplicity, and mass production potential in bringing crafts and art together. The pure simplicity, modernity, material honesty, and streamlined aesthetics are clear qualities connecting all Bauhaus products. 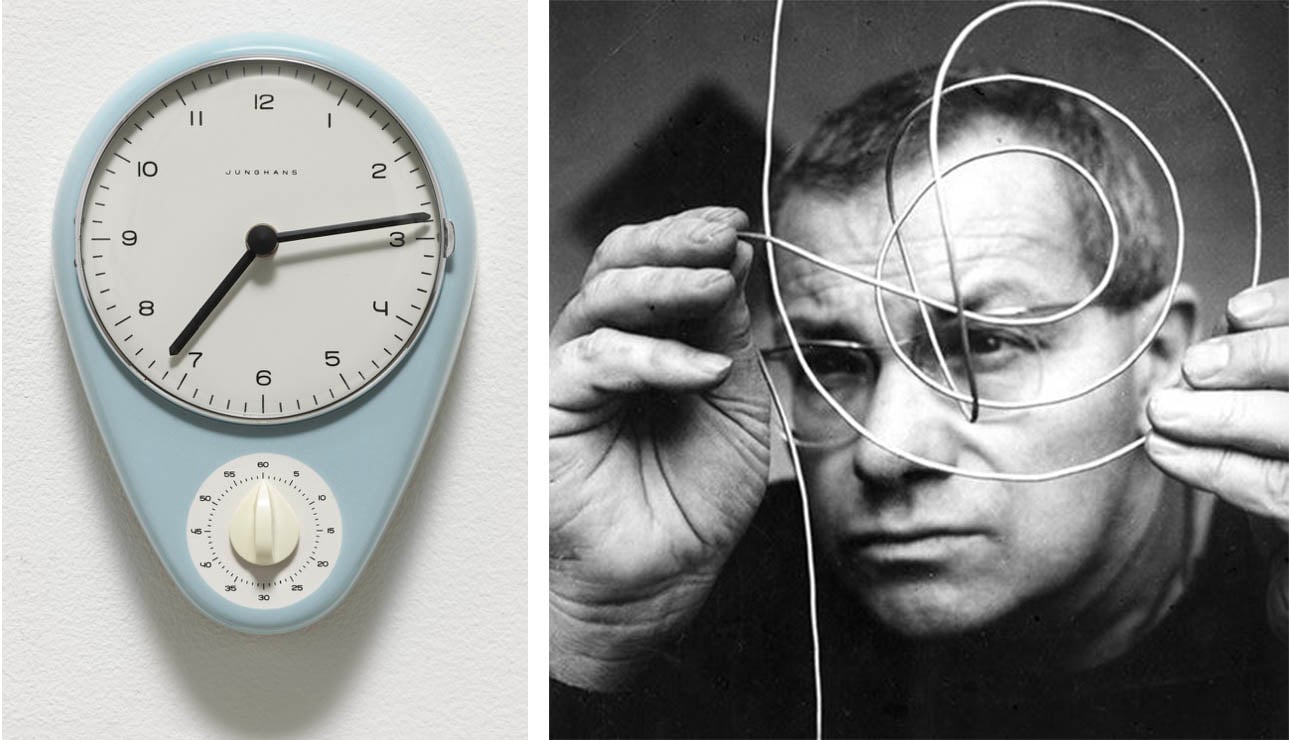 In the early 1950s when Junghans was planning on designing an everyday object such as a kitchen clock, the choice of who to do the job fell on Max Bill. Bill was already a renowned product designer at the time and together with his students at the Ulm School of Design he designed a timeless piece that is, according to MoMA, considered a classic example of postwar “good design” in everyday objects. Max Bill himself can best explain his pragmatic design philosophy: “Functional design considers the visual aspect, that is, the beauty, of an object as a component of its function, but not one that overwhelms its other primary functions.” Imagine how he would feel if he saw the Rolex Day-Date 36 ref. 128238 or the lugs on the Rolex Daytona Rainbow Everose Gold 116595RBOW.

It’s often referenced that the Junghans Max Bill wristwatches were designed in the late fifties. That’s not true, however, as 1957 is only bound to his legendary kitchen clock. On the official Junghans website, it’s 1961 that is marked as the groundbreaking year for the wristwatch design milestone. Some other sources, including a few books on horology, suggest that 1962 was the first year when Junghans introduced the first six very simple designs without any decoration by Max Bill. 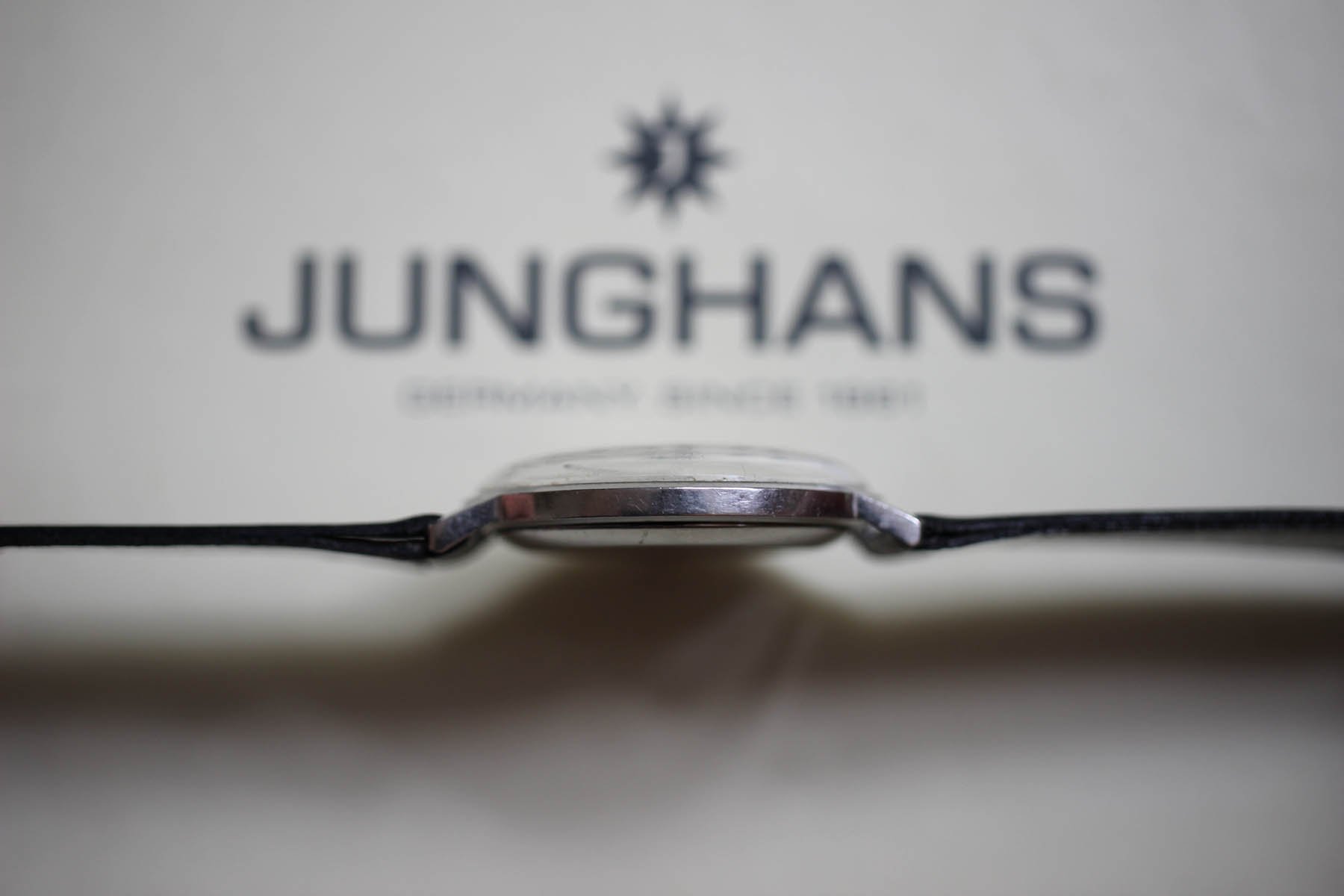 Pure vintage examples of the first series Max Bill collection are now being sold at increasingly high prices. Consequently, finding an honest untouched piece today is not easy. You can only imagine how happy I was when my friend Zsolt from 10ora10 dropped me a message with a picture of a nice Junghans Design ref 84/3963.

Even though the crown on this example has unfortunately been replaced in a tactless way, it’s still a watch you can’t let go of. Maybe it was the missing crown that had this piece sitting in a drawer for decades. Under a certain angle, you can see the cracks on the slightly yellowed crystal, that’s still original. No deep scratches on the case and the edges on the 34mm case are still dangerously sharp. 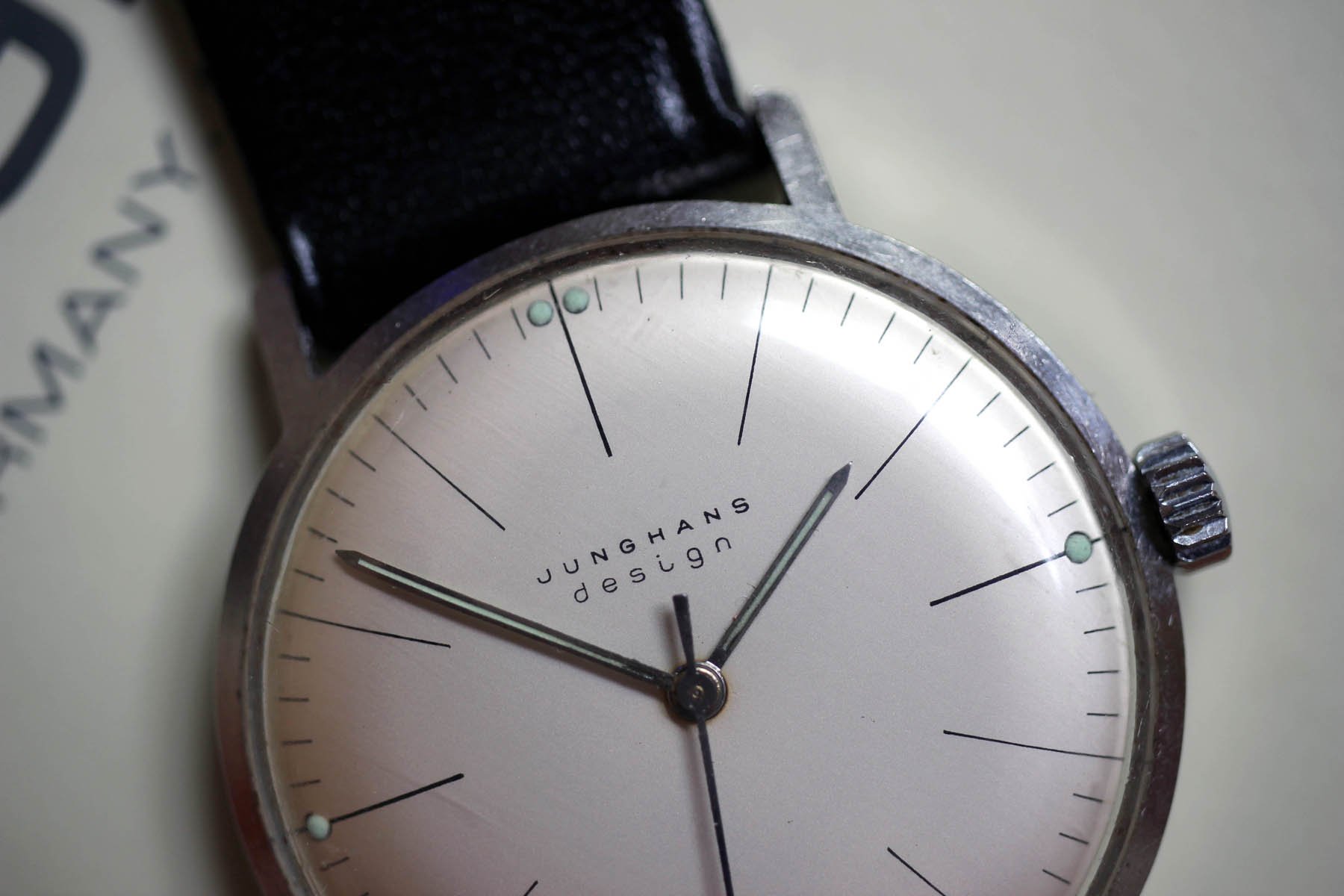 The design is the kind that makes one feel guilty even attempting to describe it. It’s so minimalistic, light and pure that only silence is needed to feel it. I don’t particularly like the thin hands, but here they look wider than a 4-lane highway.  I find the fact that Junghans managed to fit lume on such a thin hand very amusing. If you are looking for functional design traces, notice that the luminous material is applied almost all over the available area.

Speaking about the lume, don’t get confused if you see it aging into greenish tones. An unaware collector would scratch it off as a reluming job, but the opposite is true. German manufacturers actually used phosphoric luminous materials that turned a green tint the more they aged. So don’t judge it from the first picture you see and ask for UV shots and more information on the illumination effect in the dark. 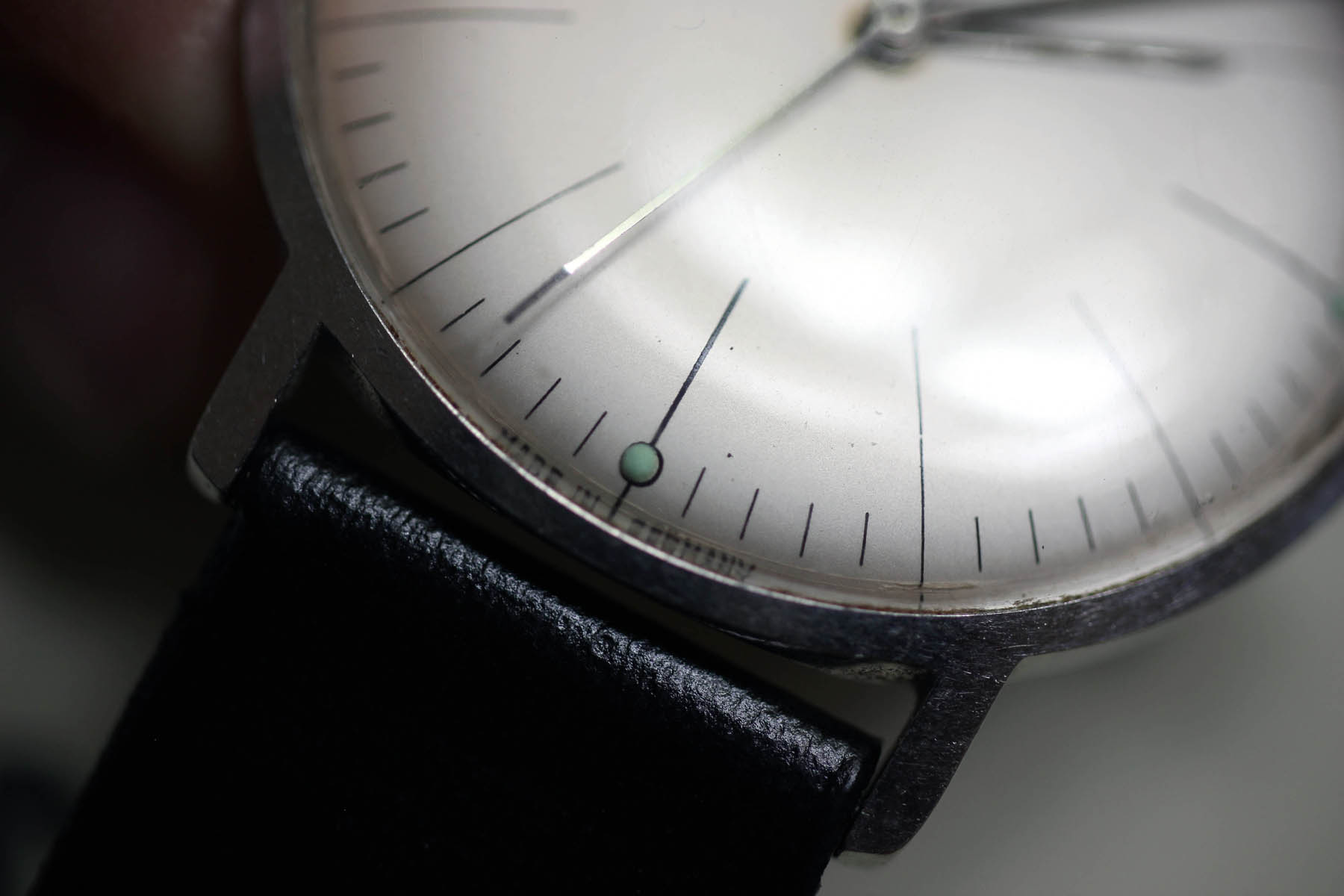 Junghans, Junghans Design, Junghans Automatic, and Junghans Meister. There are many different Junghans dial designs, but if you want to stay with a piece that‘s undoubtedly attributed to Max Bill, you should search for a piece with Junghans Design. Indicative signs for the ref 84/3963 are three lume dots at 3, 6, 9, and the double dot at 12 o’clock. Anytime I look at the minute track, it fascinates me. Despite the small watch diameter, I feel it has the biggest spaces between minute indexes I’ve ever seen. By the way, the hour indexes at 3, 6, 9, and 12 are still thin, but slightly thicker than the rest. That’s good to know if you come up against a convincing dial replacement that lacks that subtle trait. 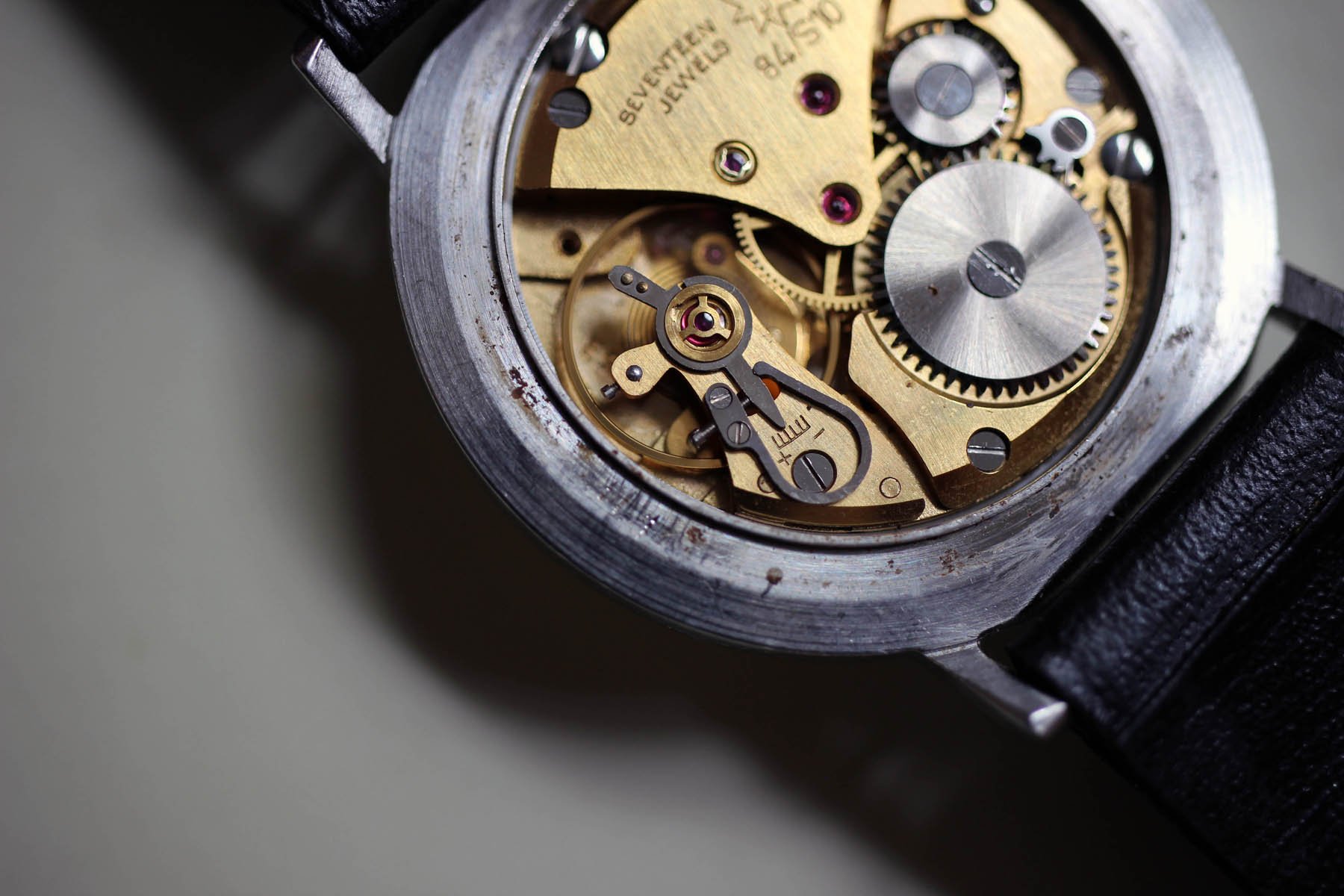 The piece I tested is powered by a factory fit 84/S10 movement, whose most admirable part is the swan neck fine regulation. I was surprised to see it there. If you put it on your wrist, you can immediately feel the Junghans Max Bill effect. Despite the fact that it’s literally tiny, it has a long-reaching charm. I don‘t know how to put it better than that it glows on your wrist. Does utilitarian and minimalistic Bauhaus design fascinate you? If so, it is definitely worthwhile investing some effort into sourcing a decent piece. After all, it‘s one of the 1960’s three-hander watches whose value will certainly only grow in time.

Hot Topics
Introducing: The New Seamaster Professional 300M 60 Years Of Bond — With A Special Animated Case Back
105 comments
Are You Still After An Omega × Swatch MoonSwatch?
85 comments
It’s Time To Invest In A Dress Watch — Our Picks From Breguet, Omega, Grand Seiko, And More
72 comments
The Rolex Waitlist Conundrum — How Much Will The Price Of Your Watch Increase While You Wait?
50 comments
The Best Omega Speedmaster Watches Of 2022
40 comments
Popular
Rolex Submariner – Historical Overview Of A Diving Legend
Robert-Jan Broer
22
Hands-On With The Seiko Prospex Dawn Grey Series
Robert-Jan Broer
12
Omega Speedmaster Hodinkee 10th Anniversary Limited Edition
Robert-Jan Broer
7