I guess there are not that many people that Rolex has had to apologize to. I mean officially, in the press. John Harwood, the creator of the world’s first automatic wristwatch, is one of them.

You might be surprised to learn that the man behind one of today’s leading Swiss industries is actually a Brit. In last year’s landmark set of six stamps by the Isle of Man Post Office, the inventor John Harwood sits right next to Roger Smith and George Daniels. I don’t own any watches from the other two yet, but I am proud to say that I landed Harwood’s automatic watch from the 1920s. 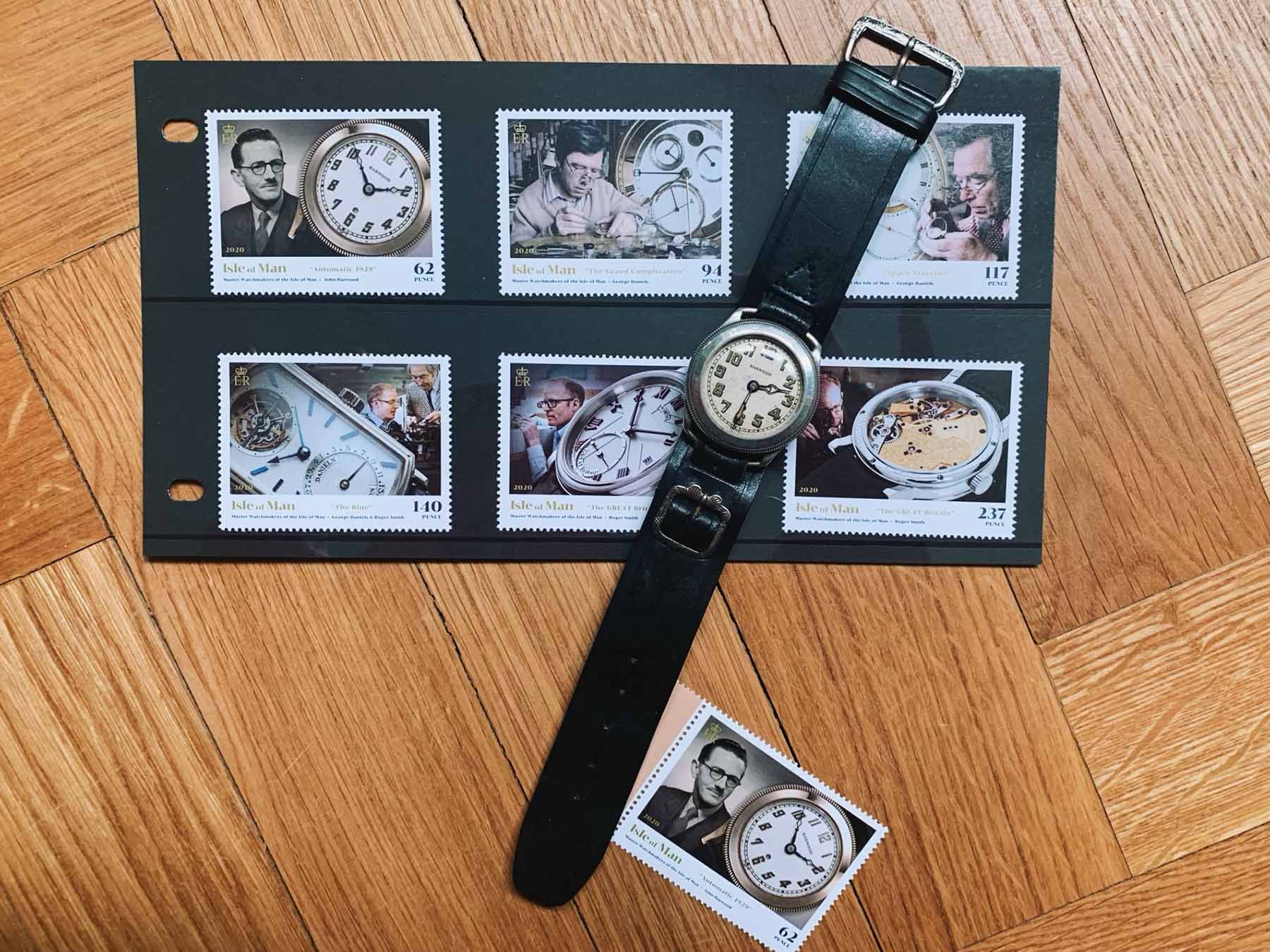 After returning from the trenches of WWI, John Harwood settled on the Isle of Man. He worked in a tiny workshop in Douglas when he noticed that a lot of watches coming in for service suffered the same problem. Dust and moisture got into the watch through the case hole and damaged the gentle mechanics. To eliminate any protruding parts through the case and to protect the movement inside he invented a new way of winding the mainspring. Similar to the current concept, Harwood patented a centrally pivoted weight that swings while the watch is worn approximately 230 degrees between sprung buffers. It’s said that Harwood got inspired while watching children playing on a see-saw.

John Harwood patented his invention in Britain, France, Germany, America, and Switzerland. The Swiss confederation in Bern awarded Harwood Patent No. 106 583 on the 1st of September 1924. You can even find that patent number engraved inside the watch movement. Yet Harwood’s journey from an idea to a commercial watch was neither short nor easy. 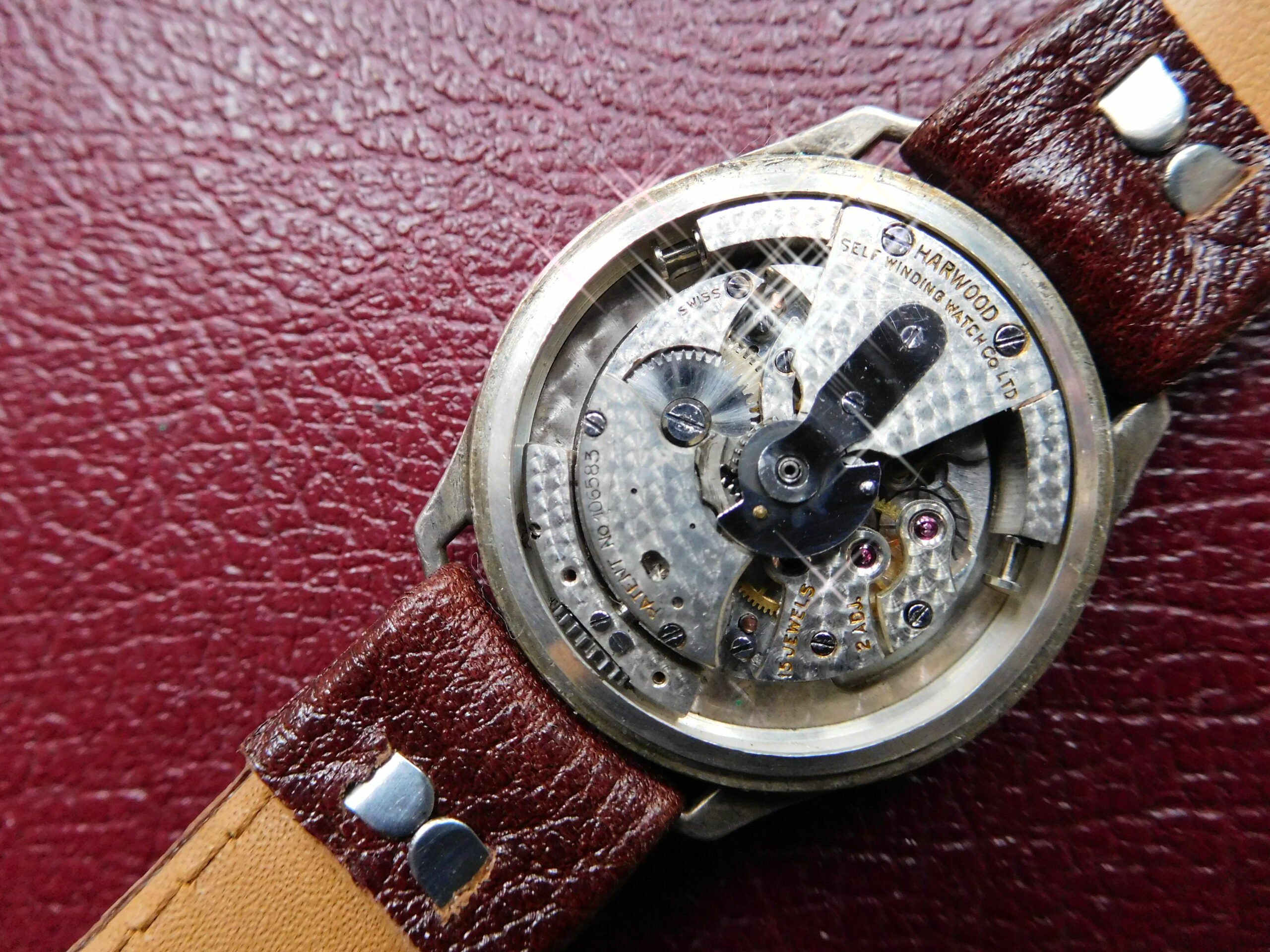 Looking for a manufacturer

According to the information available online, Harwood was able to produce the first prototypes in 1923 with the financial backing of businessman Harry Cutts. The first prototype of a self-winding wristwatch was created from a discarded pocket watch. To commercialize his dream he had to make several trips to Switzerland. With the financial backing of Manchester brothers Philip & Louis Alexander it was the Swiss movement manufacturer Anton Schild and case maker Walter Vogt from Fortis who ended up trusting and executing his vision.

The first Harwood watch was officially presented in 1926 at the Basel Trade Fair. According to another source, even Blancpain made them under license in 1928 for sale in France and the Perpetual Self-Winding Watch Company manufactured them for sale in North America. Unfortunately, Harwood’s dream didn‘t last long. The first watches were released in 1928, shortly before the economic crisis hit the market in late 1929. After the New York Stock Exchange collapsed, The Harwood Watch Company lost its sponsor and the company never recovered. 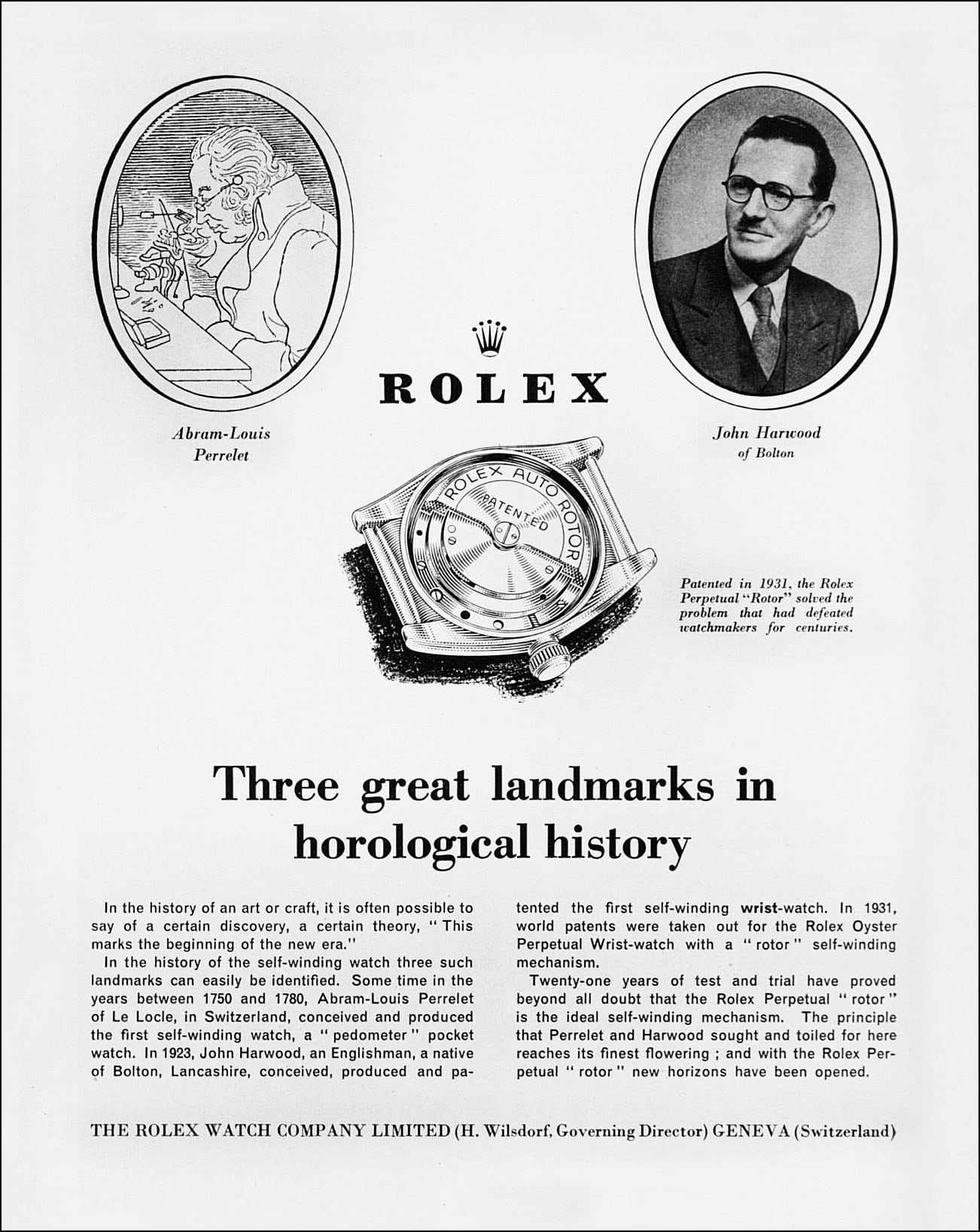 The Rolex Oyster Perpetual with a rotor movement that was introduced shortly after. It did not help Harwood’s dream of international success. Before I started researching Harwood, I had no idea Harwood led an official correspondence with Rolex about the identity of the inventor of the automatic winding system. The Harwood “Hammer” mechanism and the Rolex “Rotor“ mechanism that rotated a weight through 360 degrees ended up with a special advertisement promoting three landmarks in horological history. It was well deserved recognition for John Harwood, whose life was cut short by a road accident in 1964.

Other findings support the idea that the disagreements around the first automatic wristwatch continued for years. On the Harwood website, there is a clipping from a 1956 edition of the Sunday Express that includes a sincere apology by Rolex to John Harwood. Rolex, represented by H. Wilsdorf, gave John Harwood full credit as the inventor of the world’s first automatic wristwatch.

I was fascinated by John Harwood’s story as that of a lonely lunatic chasing his dream. As usual, I had to be patient and persistent in searching for one of his pieces (although I am used to that by now). I saw some of them a few times, but always had my doubts about their history. It’s a delicate piece and you want an honest one. I decided to pull the trigger on an auction that seemed to list an original piece. 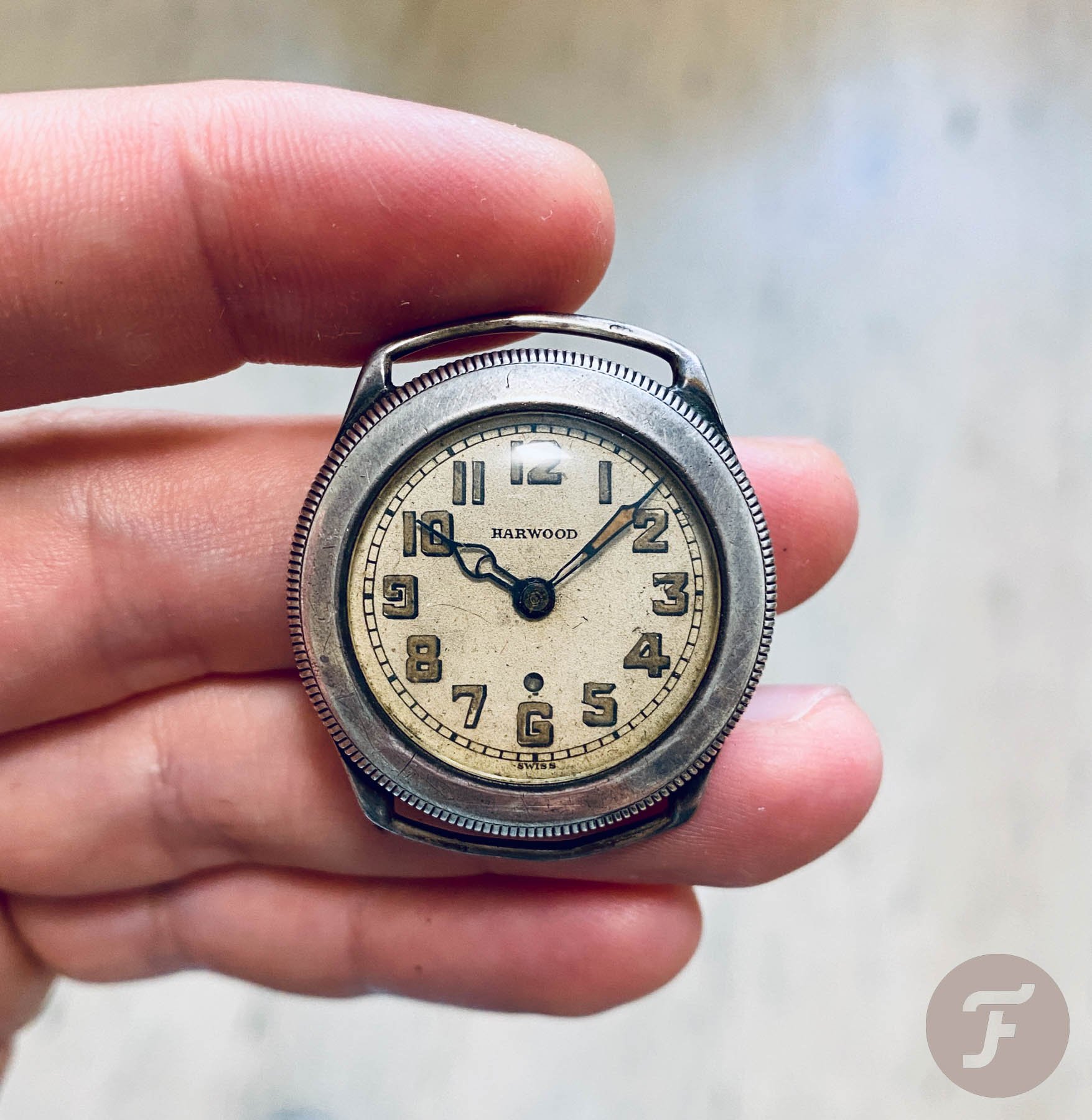 When the Harwood arrived, I was genuinely amused. It’s a different joy than when you land a popular big shot vintage watch. This was the kind of amusement that comes after you meet an under-the-radar concept such as the recently featured Mido Radiotime. After I played with the bezel for a moment I took the Harwood to my watchmaker to get the condition report. I was sad when I learned that the oscillating weight was broken on a very thin connecting point. Before we could proceed with the service, the Harwood expected a very delicate soldering job.

“That Harwood surprisingly shows a lot of potential,” read the text message from my watchmaker Tomas. “After a day on the wrist, it has around 27 hours of power reserve.” When I came to pick it up, I could not wait to try the rotating bezel. There is a small circular aperture above the six o’clock. If it shows red, the hands are engaged and running properly. If you turn the bezel in either direction a bit more, you will notice the red slides away. It signals that if you turn the bezel more, you can set the time. Not bad for an almost 100-year-old wristwatch. 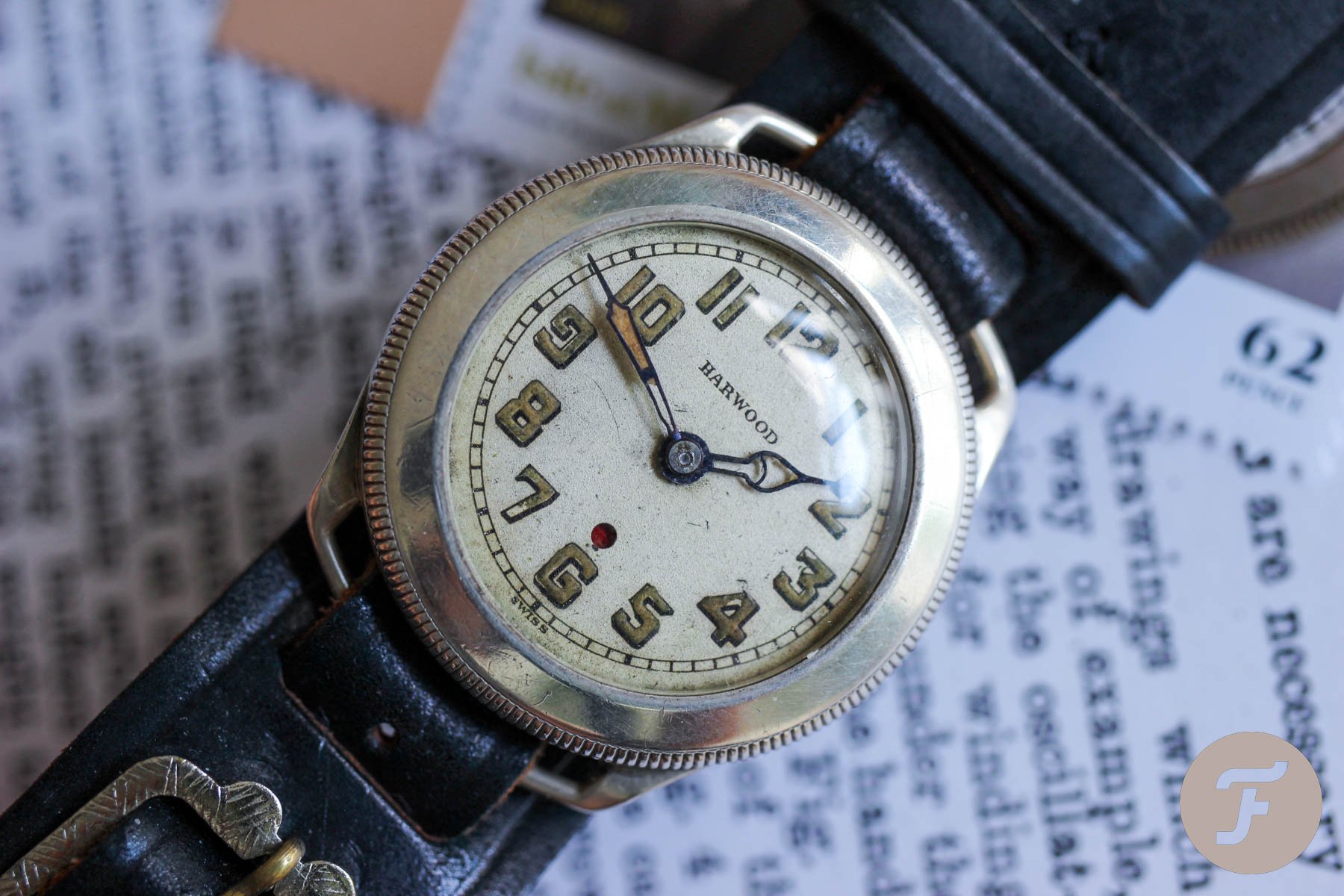 A dial with big fat jersey-like Arabic numerals looks like a tiny version of the best pocket watch designs. I like the no-nonsense approach with the simple minute rail-track, the Harwood inscription, and no running seconds. If it were not a 30mm, but rather a 38mm watch, it would be the real deal. And I would be ready to sport it more often and for more reasons than the admiration to its self-winding primacy. If you have around €1,000 to spend on a horological talking piece, I would put this first self-winding watch from Harwood on your shortlist.