As most of you know we try to bring a diverse selection of vintage watches to #TBT week after week. It’s obvious that among vintage watches we (at least Mike and I definitely) have a soft spot for complications. Nowadays the most sought after of these happen to be chronographs, but you all know this by now. So what is cooler than a vintage chrono? A vintage military chrono!

As most of you know we try to bring a diverse selection of vintage watches to #TBT week after week. It’s obvious that among vintage watches we (at least Mike and I definitely) have a soft spot for complications. Nowadays the most sought after of these happen to be chronographs, but you all know this by now. So what is cooler than a vintage chrono? A vintage military chrono! Now we have dealt with such watches in the past on the pages of #TBT. Just think about my article on the Angelus L.E. issued to the Hungarian Air Force or Mike’s article about the Heuer and Leonidas military watches. 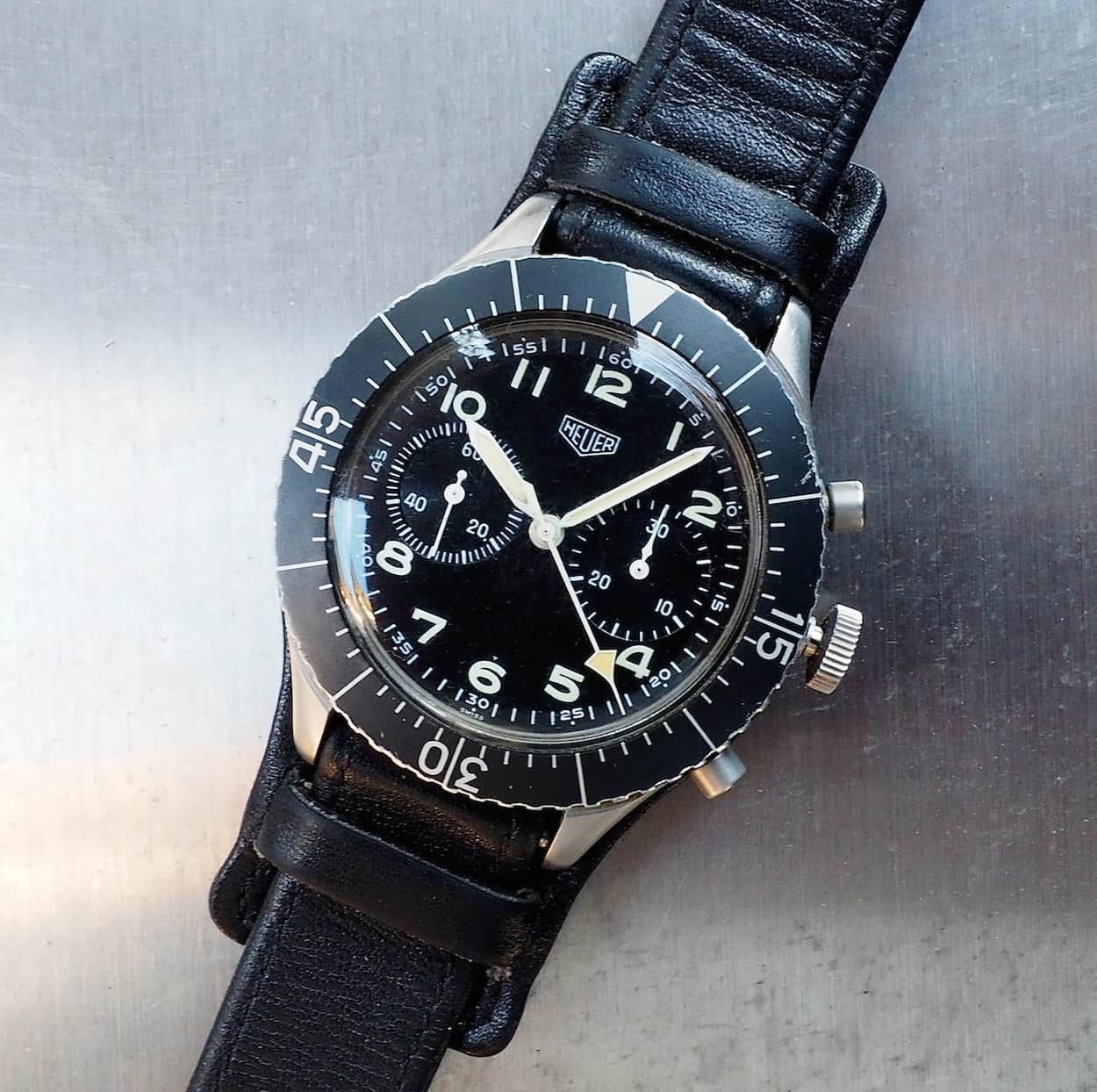 Leonidas and Heuer were a joint company back in the day (as a matter of fact Tag Heuer still owns Leonidas). While Leonidas produced watches for the Italian military, Heuer was supplying them to the West-German Bundeswehr (German military). Now, the German military had a really good taste when it came to watches. Companies like Tutima, Orfina Porsche Design, Sinn and Heuer of course were all among the brands chosen to provide them with watches. This week’s #TBT is actually the watch the Bundeswehr used before the aforementioned Heuer chronographs. One of the largest factories of the time produced it: Junghans. Down in the belly of the Black Forrest lies the factory (we have covered their story a while ago here) that gave the Junghans Bundeswehr to the world. 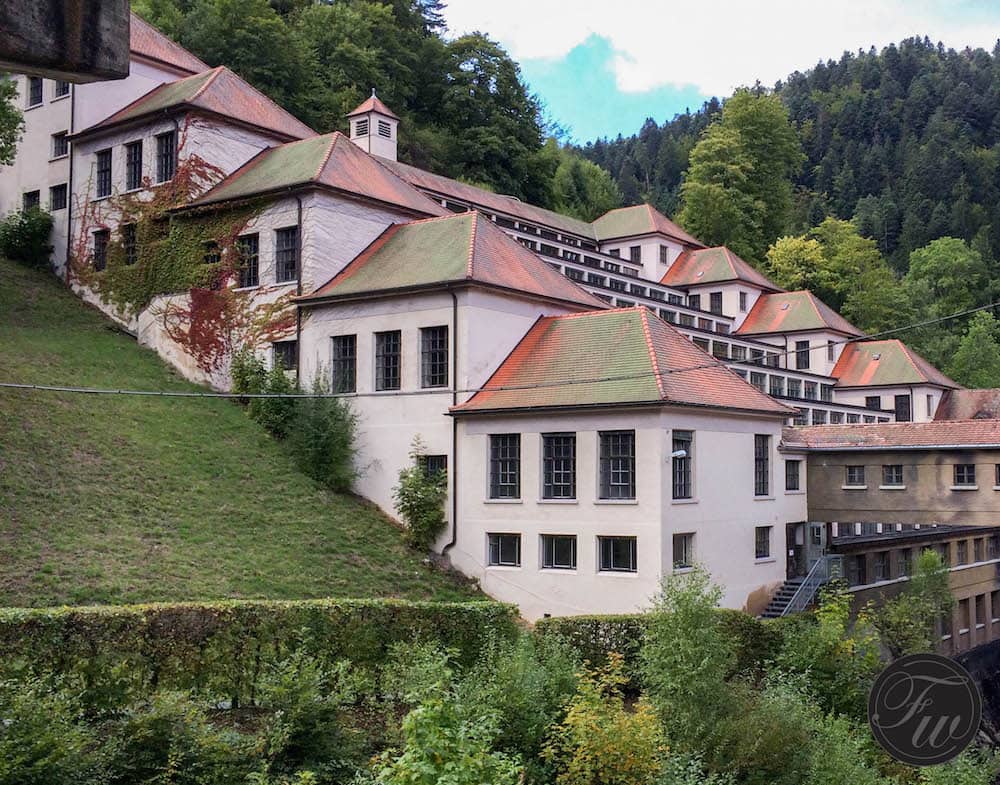 The Junghans factory hidden in a valley of the Black Forrest

This became even more true after the II. World War when Glashütte fell behind the Iron Curtain. The post-war period allowed for a fresh start for brands like Hanhart, Stowa and Junghans who had a bitter-sweet history after their involvement with the war. After the Wermacht was abolished in 1946 Germany had no military left. However due to rising tension between the west and the Soviet Union in what became the Cold War it became necessary for Germany to establish a new army. 9 years after dismembering the last of its armed forces, the Bundeswehr came to existence again in West Germany. Junghans was the second company to provide watches for the newly assembled German army. 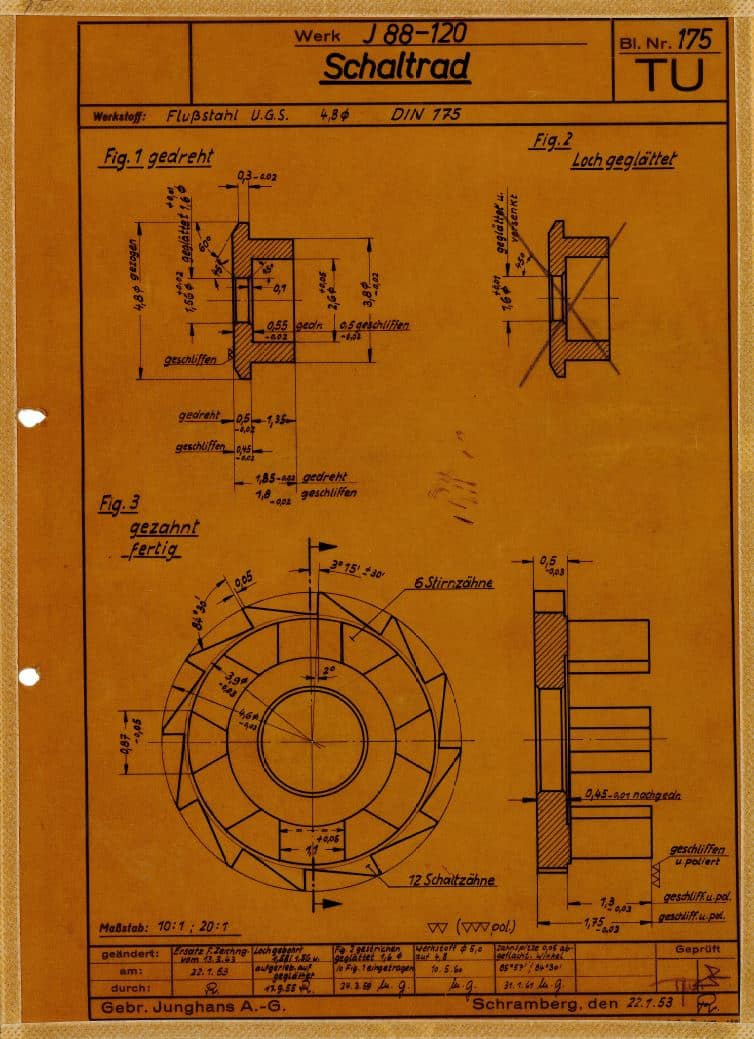 A page of the original design of caliber J88 by Junghans

The only flaw of this watch is the case. While we love steel watches the Junghans Bundeswehr models had brass cases with chrome-plating. This gives a grey titanium-like look to the watch but also ages badly with the brass eventually showing under deep scratches. The size is 38mm, which is big enough to be contemporary even nowadays and with the thickness of just under 13mm it still sits comfortably on the wrist. The earlier examples had round edged bi-directional rotating bezels, similar to their predecessors; the Hanhart bund watches (Hanhart’s also served during the war and were distinguished by their rimmed bezels and occasionally red painted chrono pushers). This example already has the soon-to-be iconic 12-sided rounded bezel with minutes scale. There is a tritium triangle at the 12 o’clock. The short and fat pump pushers and the large crown finish off the military look of the Junghans Bundeswehr chronograph. 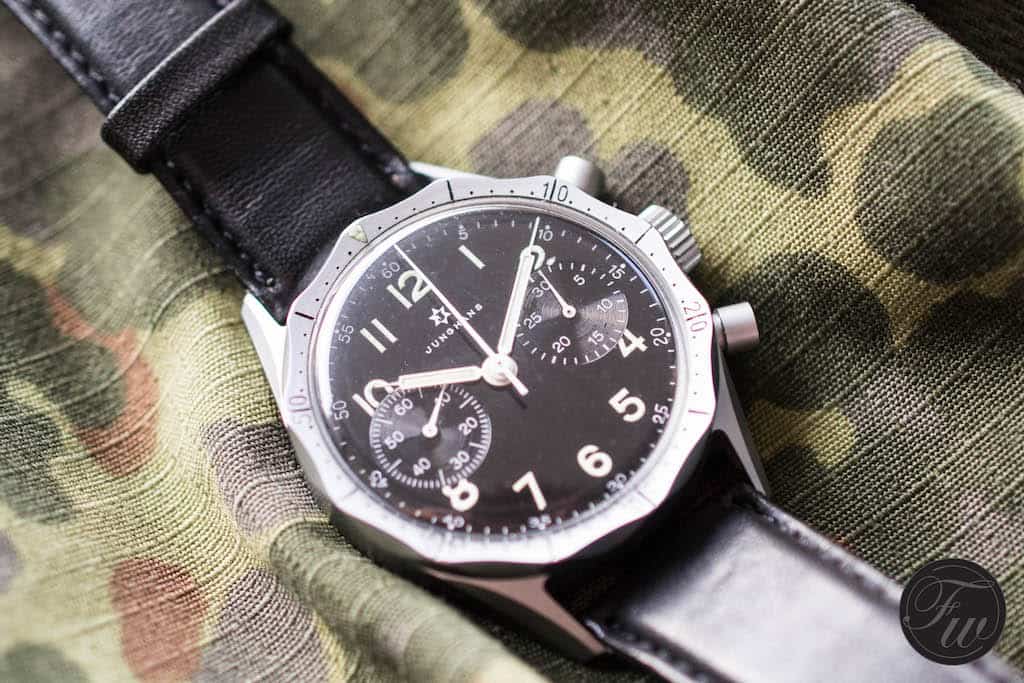 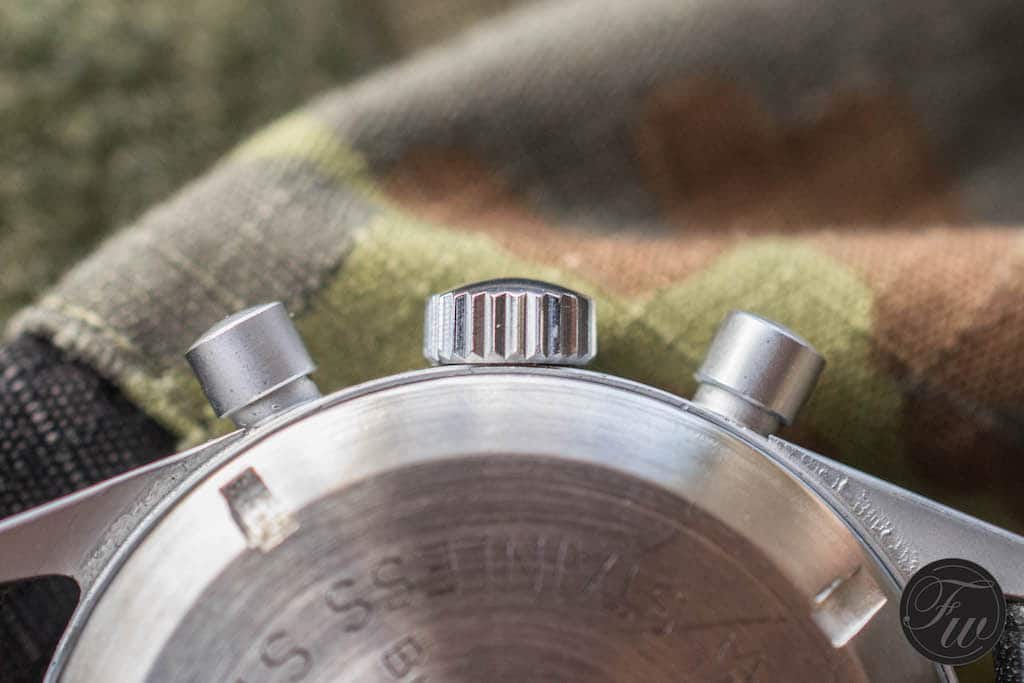 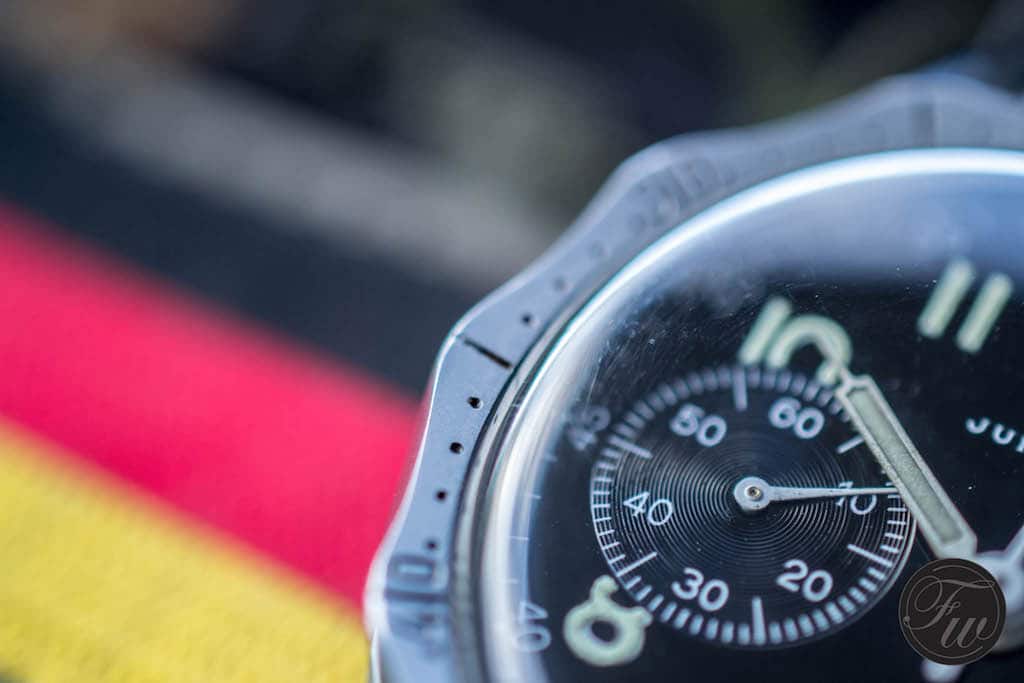 Once you flip the watch over, and remove the Bund strap pad to see the case back, you finally can verify the military provenance of the timepiece. In the center of the back you can read the following: “Bundeseigentum 12-124-8591” meaning “National property” followed by the model classification number which is seen above. The older versions had a different number (12-120-9351) and with this you can clearly distinguish which model are you holding in your hands. Around this text there is information about the case back being steel or that the watch is shock and water-resistant. They inscribed the same star logo with the “J” in the middle, you see on the dial, to the back The case back is of course screw-in with a plain inside. 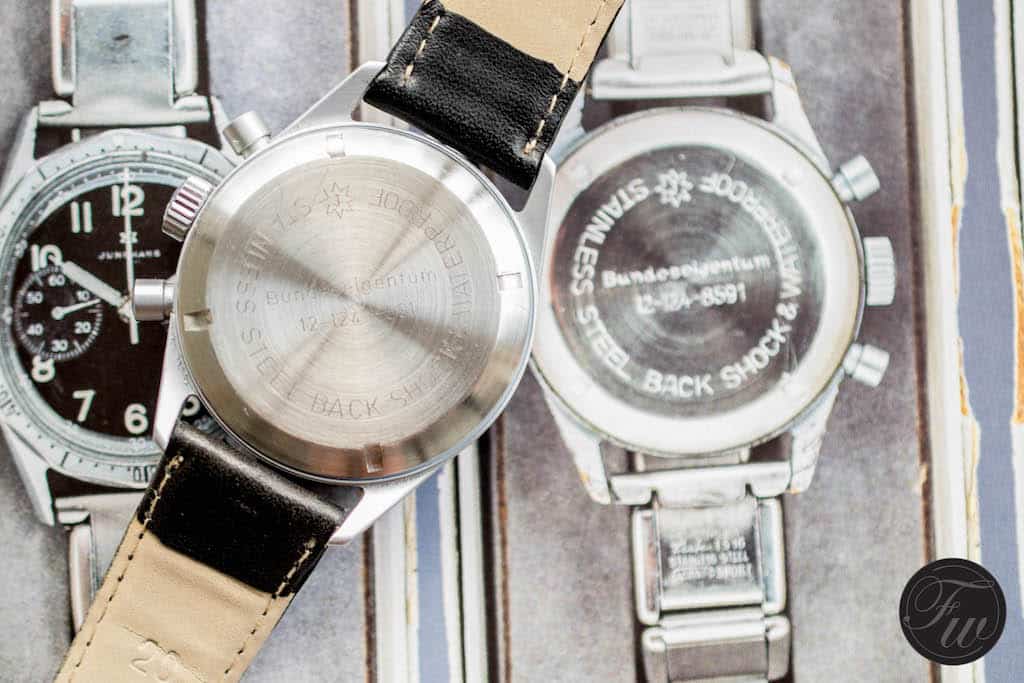 The Junghans Bundeswehr watches came on 2 different straps. The so-called bund strap was the more common version. It is basically a 2 piece black leather strap with an extra leather pad and 2 holders that go under the watch. The watch sits on the pad when worn and the 2 pieces of the strap are laced under the holder of the pad. On the backside of the pad you could also find the model classification number of the watch. The other option was a steel expandable bracelet from the brand Kiefer. This was very similar to the famous (or infamous) twist-o-flex bands. The Kiefer had small square links, it felt really light and cheap and broke or deformed quite easily. Due to this these bracelets are rare to come by however they don’t really hold much value either. 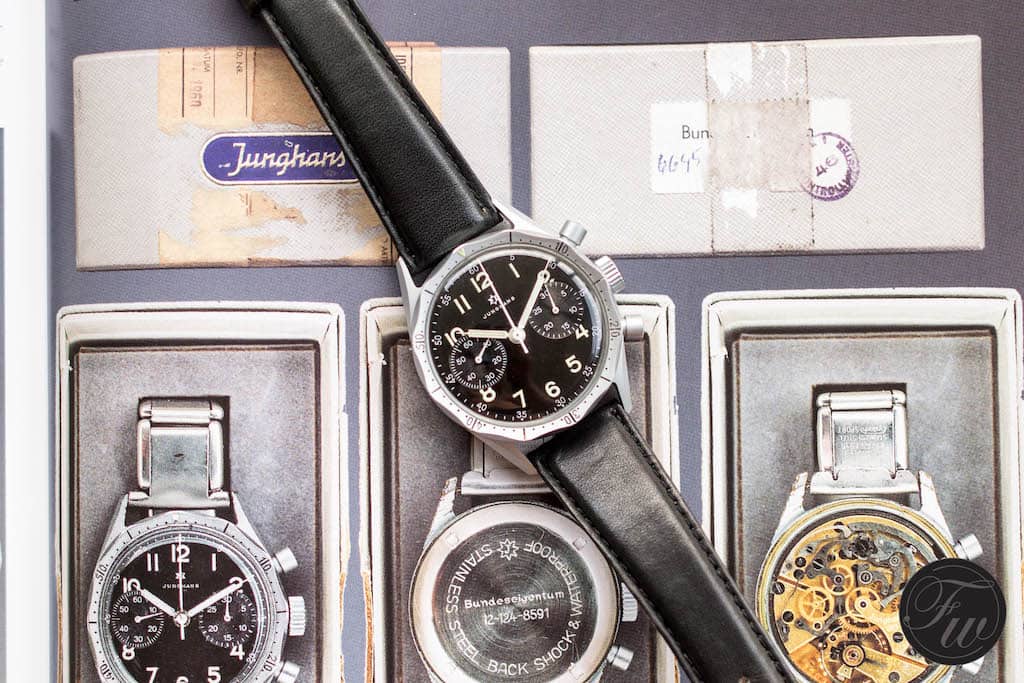 There isn’t much to say about the dial. It is very simple and easy to read just how you would want it from a military piece. Throughout the years there have been a few different dial variations mostly concerning the logo. Sometimes only the brand name was on the dial, other times the typical Junghans star logo too. This example is one of the latter versions with both the name and logo below the 12 o’clock. As with all Junghans Bundeswehr watches the dial has all numbers visible with thick radium coating. The large luminescent numbers on a black dial are usually the characteristics of most military watches and the Junghans Bundeswehr is no exception. The dial on this watch is still in amazing condition with only very minor traces of wear. The hands have matching patina otherwise they are all have white cover for easier time reading. 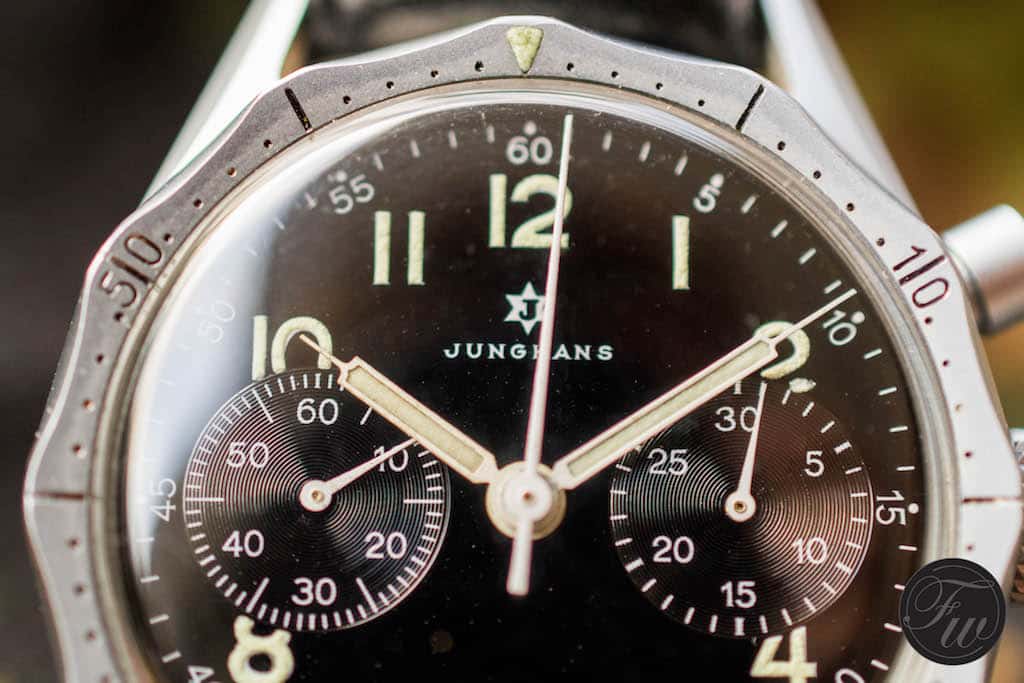 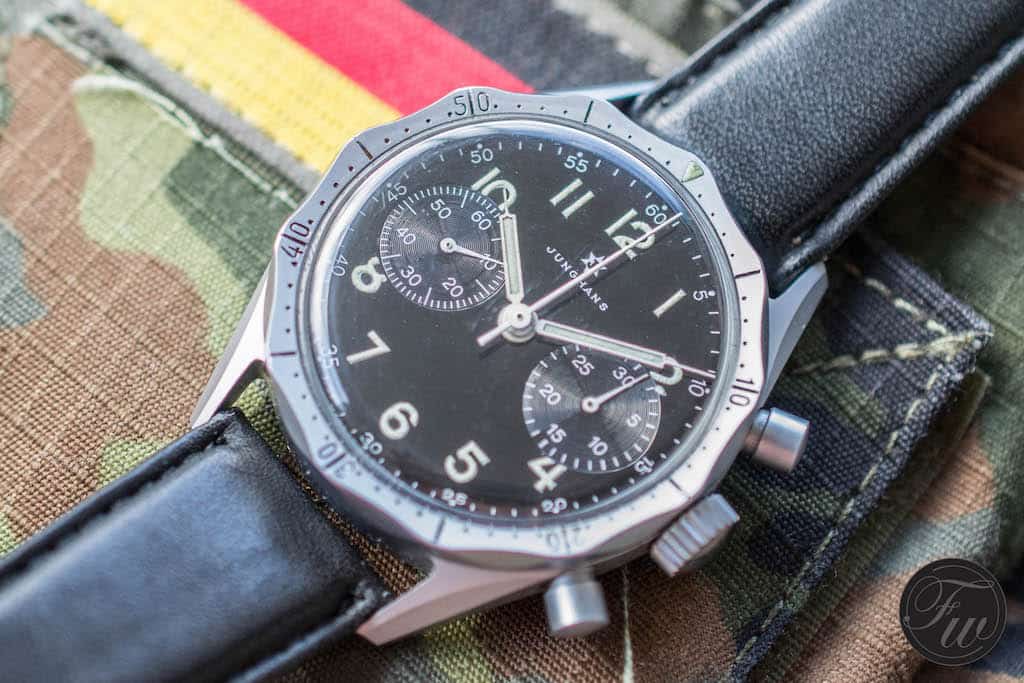 The plan to develop a chronograph movement at Junghans dates to the mid-40’s. In 1946, watchmakers at Junghans already started work on what later became caliber J88. This was the movement Junghans used in their project watch for submission when the Bundeswehr was searching for a timepiece. Junghans produced the J88 from 1950 until the mid-60’s (1964 or 1965) and it was first built into the Bundeswehr watches but later made available for the public in other civilian chronographs. To say that the caliber J88 is a piece of art would be an understatement. It is a shock-proof 19 jewel gold plated werk (German for ‘movement’) with Breguet springs and column wheel of course. The power reserve is 40+ hours. A Bundeswehr model is on display in Junghans’ museum where a mirror is placed behind the watch so spectators could admire the front of the timepiece as well as its amazing movement. 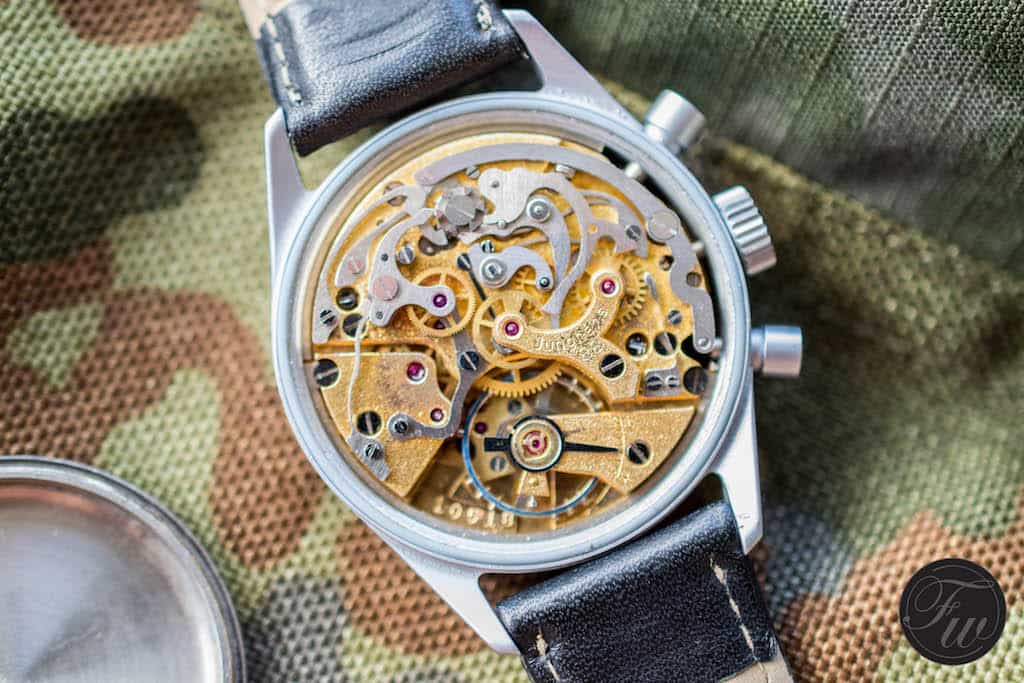 The price of the Junghans Bundeswehr chronograph is all over the place. From a thousand Euros up to 3-4k, I have seen them everywhere. Keep in mind that while the J88 is a super sweet in-house column wheel movement by Junghans that is a work of art the watch also has some flaws. Just think of the chromed case, which is a pain to repair if the plating is missing. After the Bundeswehr models the brand built the J88 caliber into a civilian version. These come up for sale more often and you can get a decent example for a lot less than a bund chrono. 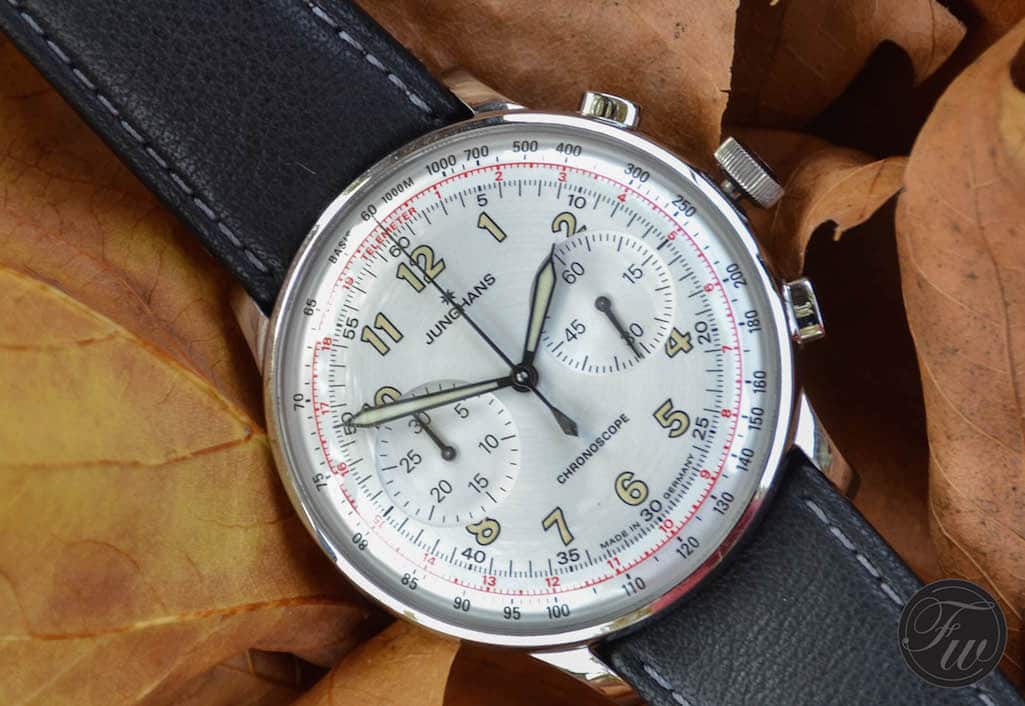 A while ago I reviewed the Junghans Meister Telemeter. It is a re-edition of a 1960’s model and that original watch had the same J88 movement. So if you ever see a vintage Junghans chrono from the 60’s chance are, you are probably looking at the caliber J88. That would be a wise thing to buy. 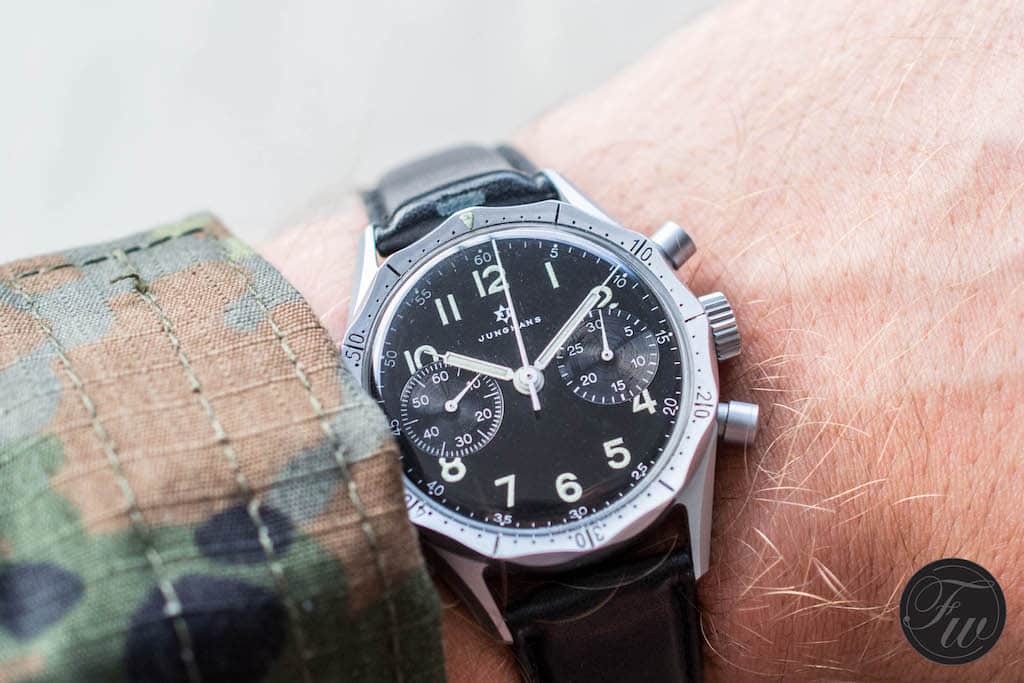 I would like to thank Junghans for their help in this project. I used  Dr. Konrad Knirim’s Military Timepieces book for some of the research.