#TBT Meet The Datumatic, My Only Constantly Running Timepiece

This is a real hidden gem
Tomas Rosputinsky
comments 7
Share

Czech inventor Zdenek Jiskra won a bronze medal at the 1937 Paris Fair. And the design and mechanics of the perpetual calendar clock that he won it for are beyond fascinating.

The Datumatic table clock shows minutes, hours, the weekday, date, month, and the last number of a year. Through a panoramic window on the back of the beautifully carved case, it even displays an AM/PM indication, just to make setting the time easier. 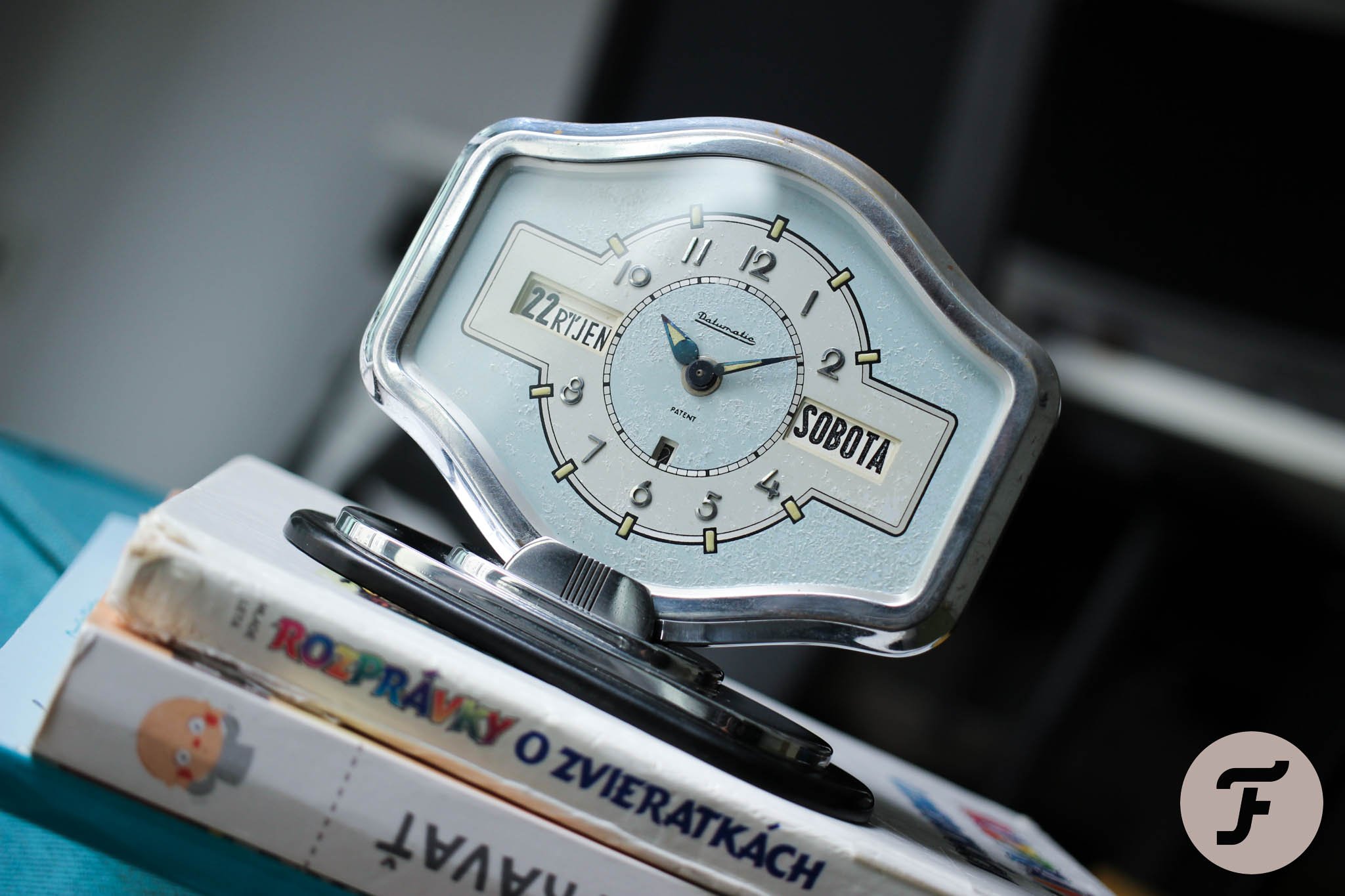 And the best part is yet to come. The calendar mechanism in the Datumatic can process the length of different months. It can even display a leap year and show the magical 29th of February. All by itself too — as low maintenance as you always wished for. Well, we are still talking eight-decade-old clock. The only thing you have to do to keep it running is to wind its eight-day-power-reserve mainspring once a week.

Discovery of an invention

I admit, if I didn’t live next door to the Czech Republic and I didn’t happen to know the language of the country, the Datumatic story would have probably eluded me forever. I don’t remember where or how I bumped into the Datumatic; I guess it was on one of the local auction sites. But when I saw it four years ago, I fell in love with it, and I had to get one!

It is not easy to find a Datumatic, especially a solid piece. The mechanics are fragile, its thin discs can be misaligned, and the teeth of the date wheel can be worn out. To find a patient and competent watchmaker who would participate in such a delicate service is equally difficult if not more difficult than finding the clock itself.

The man behind the Datumatic clock is Zdenek Jiskra. He first invented a perpetual calendar mechanism for calculating interest rates on top of costs during the time of electrification of Czech villages in the 1930s. The core of the invention he left to be patented in 14 countries were five thin discs with unusual gears that looked like a set of lethal saw blades. Jiskra implemented this system into a prototype of a table clock that he took to the Paris Fair in 1937. A bronze medal helped to get offers for a buyout of the patent, but he decided not to sell.

In the mid-1930s, Jiskra founded his own company instead and decided to produce a perpetual calendar clock under his brand. In the first years of Datumatic production, all the parts were bought from or made by other manufacturers. Cheap eight-day movements were supplied by the German company Mauthe. After the company stopped providing movements, Jiskra created his H8 movement, which was basically a copy of the one by Mauthe. 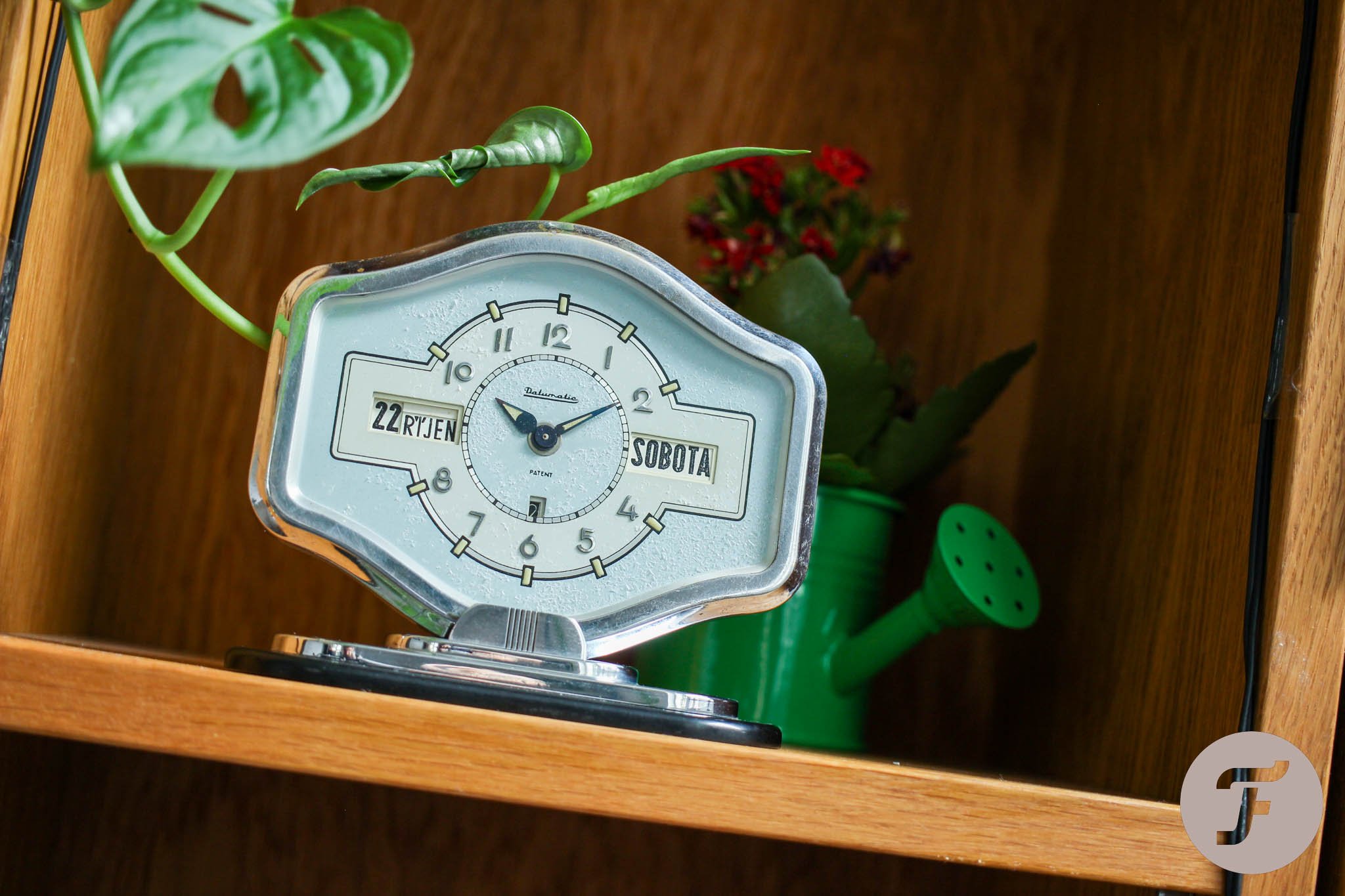 There are no records of how many pieces of Datumatic table clock were produced. According to Zdenek Martinek, Czech historian and author of the book about Czecho-Slovak watchmaking history, the Datumatic clock was a low-production item and never exceeded 6,000 pieces annually. The company closed in 1952, the last year of production for the Datumatic clocks. 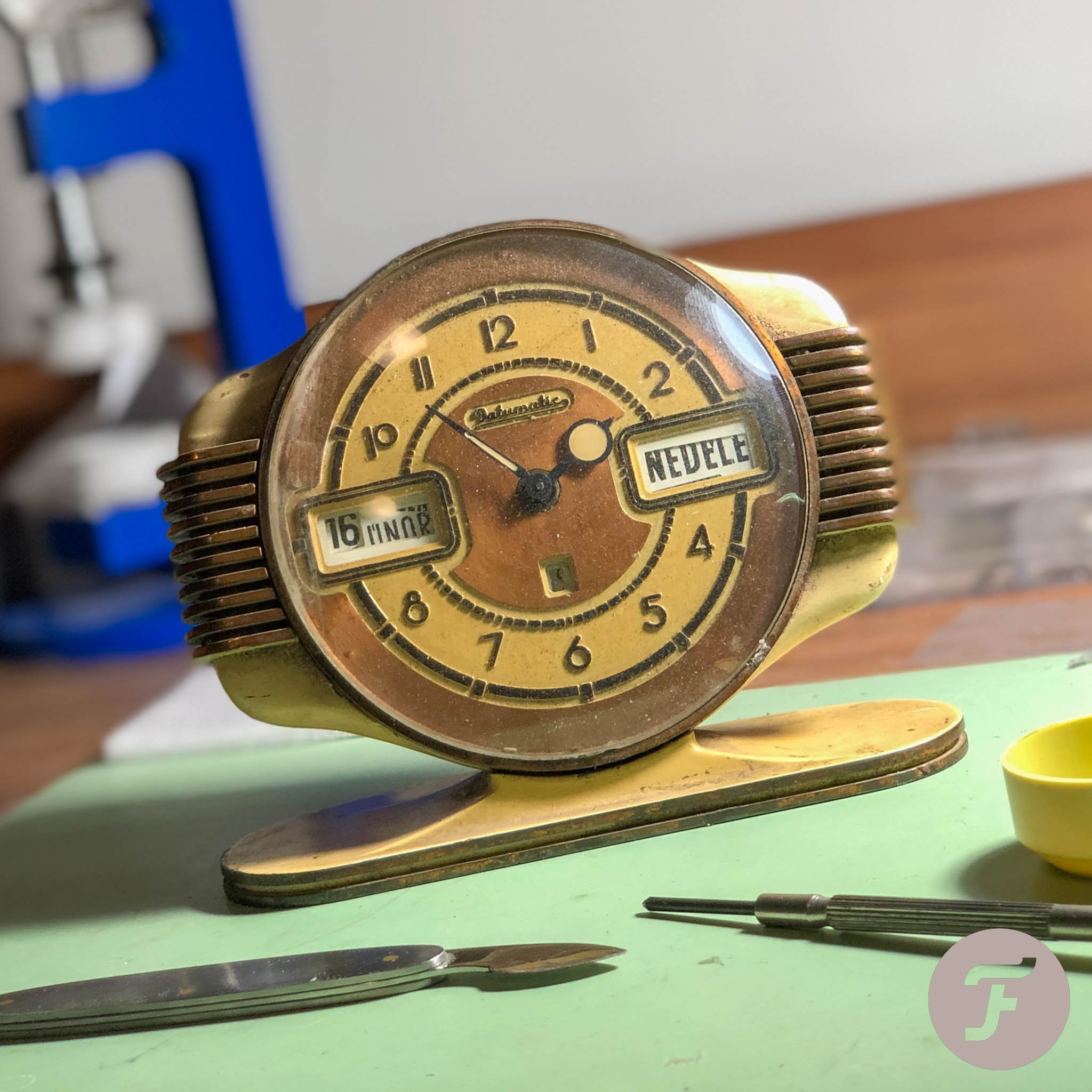 There were two basic designs, and both were available in different, striking color sets. Datumatic clocks also had different and quite creative stands. My watchmaker probably has the older model with a short but prominent lollipop hour hand. His Datumatic looks like an old American radio and is heavier than mine. Mine is also slightly smaller. But with a 12cm height and a 13cm length, I find it just perfectly sized. It’s not tiny, but on the other hand, it is not that big, so it doesn’t get in the way on a shelf or my office table. 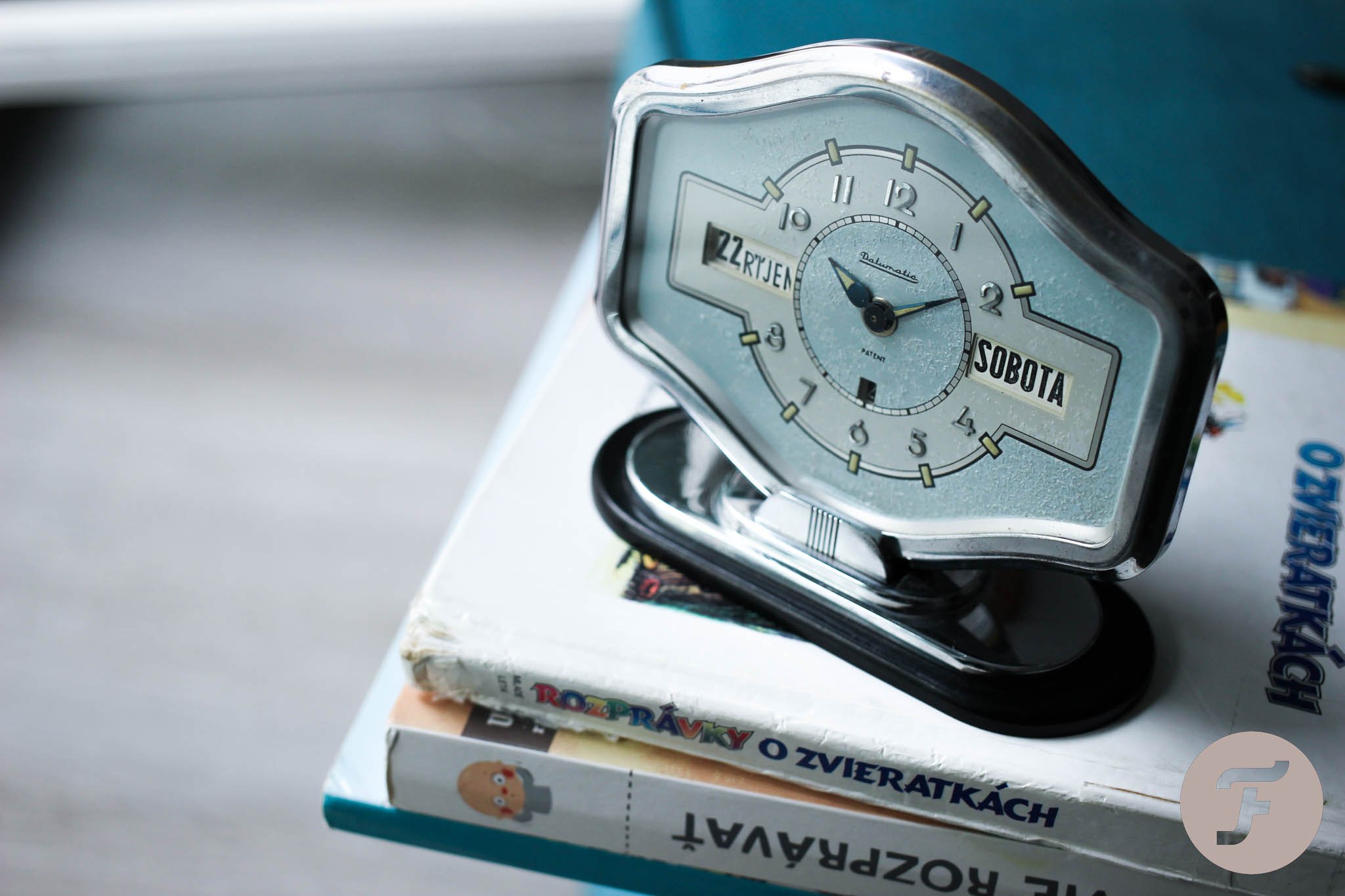 My Datumatic is incomparably lighter than my watchmaker’s example. There is no steel mass, just a shiny and now a bit patinated metal frame. The chrome on some of the edges has faded, but I don’t mind. After all, it’s part of its true vintage patina. The body shape of the clock is just perfect. The thin stepped base is minimalistic but holds the clock firmly.

The dial and the case have the same shape, and the case is just slightly rounded. Does the rectangle over a circle remind you of something? I like it so much because perhaps I see some iconic logos in it, like those of Datsun or London Underground. The fact is, it allows perfect integration of the date/month window on the left and the weekday on the right side.

The artistry of the dial is what gets me every morning when I come to the office. It reminds me of one of my favorite and most artistic watch dials on the Wyler Il Crichettino. Notice the contrast of the thicker and thinner strokes on the edging on it. The central minute track and the outer line connecting the lumed indexes are painted in matte silver. It’s vivid, and it blends nicely with the light blue and light gray backgrounds. The lacquer on the dial started to peel off at a certain stage, but it seems to have stabilized since it reached my desk four years ago. I haven’t touched it, though. I like the ice-crystal kind of effect it created. 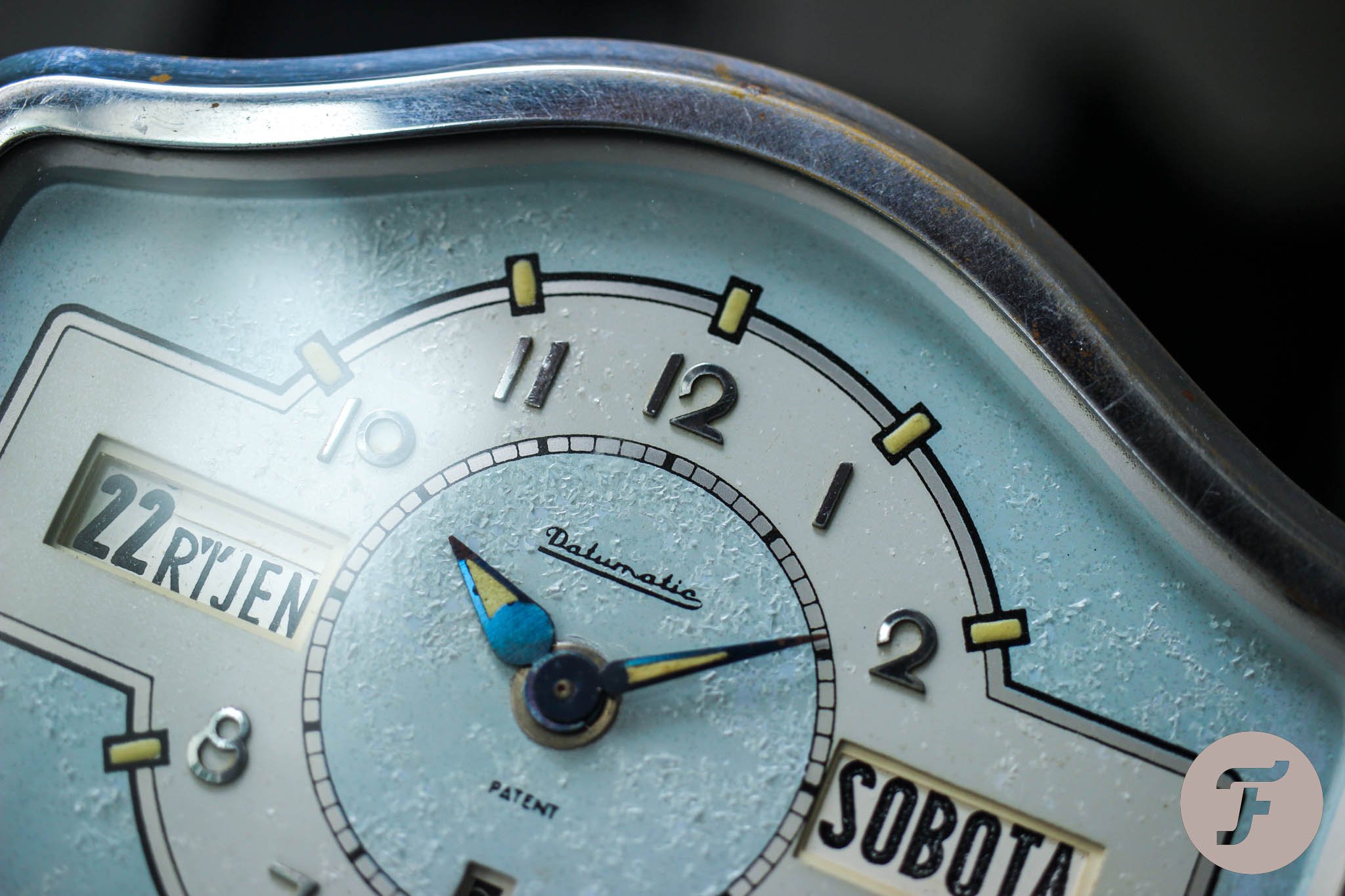 My Datumatic is an absolute masterclass in font style, and it beats even my favorite Excelsior Park and Gallet wristwatches. Where should I start — slanted tips on the 1s, curly heads on the 2s, a snowman 8, a beefy 5, or a perfectly balanced 4? These numerals are applied and highly polished. I can’t get enough of them even after four years, and believe me, I do look at them almost every day. The same goes for the unusual font on the rotating discs. The black color is engagingly uneven. It reminds me of the effect you see when you do not press a stamp down hard enough. Oh, and I guess all the non-native English speakers can appreciate how heartwarming it is to see your local language on the month and weekdays discs.

Last thoughts on the Datumatic

No single wristwatch in my collection gets as much attention as my Datumatic does. It has, more or less, been constantly running since it came to me four years ago. The loud ticking sometimes gets on my business partner’s nerves, but I don’t even notice it today. My Datumatic came in an original box accompanied by an original manual, which is a wonder. From a price/value/usage perspective, it was the best €150 I’ve ever spent on anything watch related. Happy hunting!