#TBT The Venus 211 Caliber In A Bucherer Chronograph

Today’s #TBT on the Venus 211 is a special one as it is the first article from a new Fratello contributor, Tomas Rosputinsky (@rosputinsky_tomas on Instagram). Tomas is from, and lives in, Slovakia and has a taste for some rather eclectic vintage watches. In the future, we’ll see pieces on both the new and old from him, but today we start with something decidedly “dated”. Welcome, Tomas! 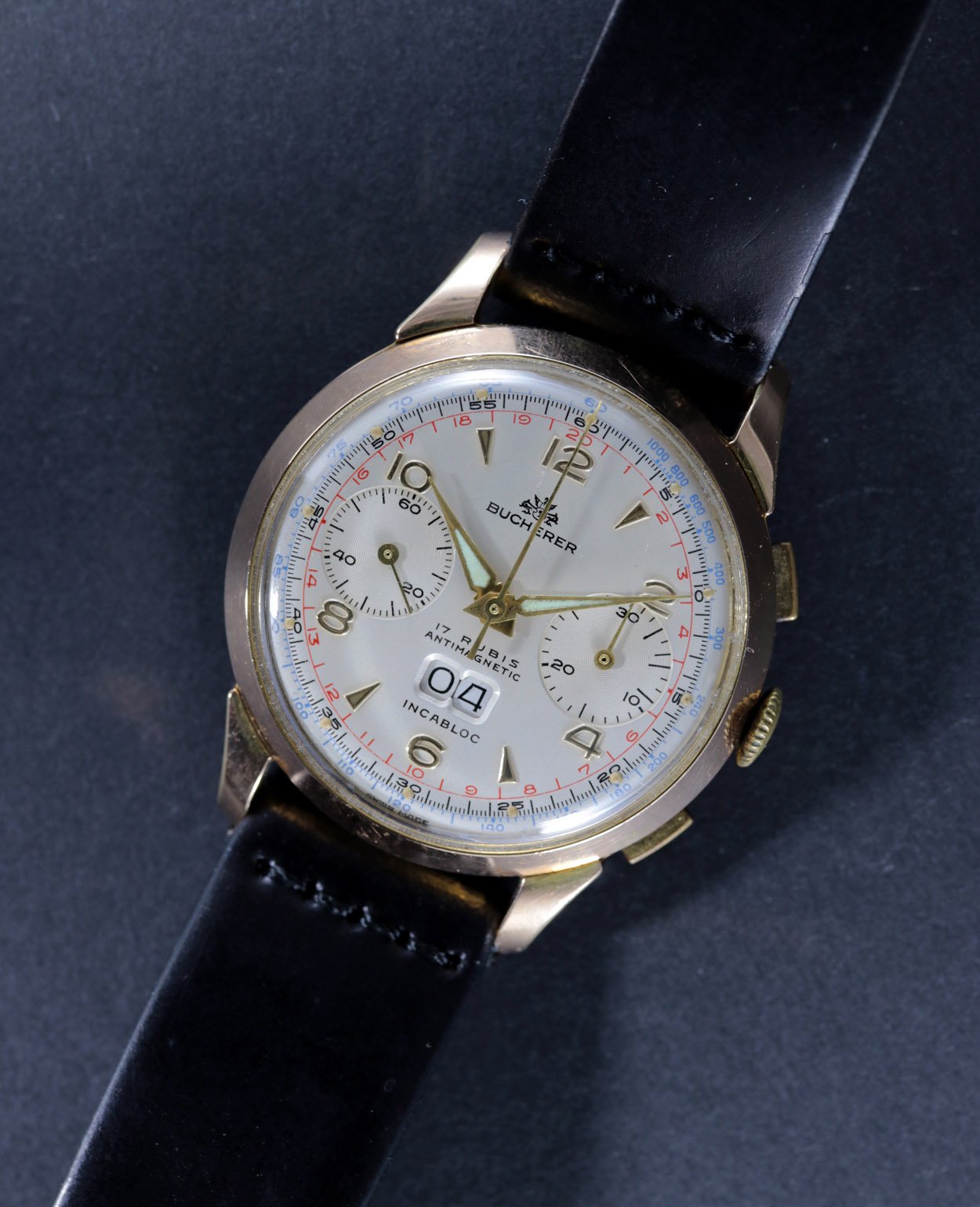 I think it was after a full week with the Speedmaster 60th LE (my first Speedy ever) that I realized how often I look at my wrist searching for the date. No matter how much I enjoyed the Speedmaster, that week drew my attention to vintage date watches. But this time with a renewed curiosity, trying to understand what secrets could be found on the market. A few spontaneous and pretty random purchases later, I was encouraged even more – this ultimately led to the Venus 211. 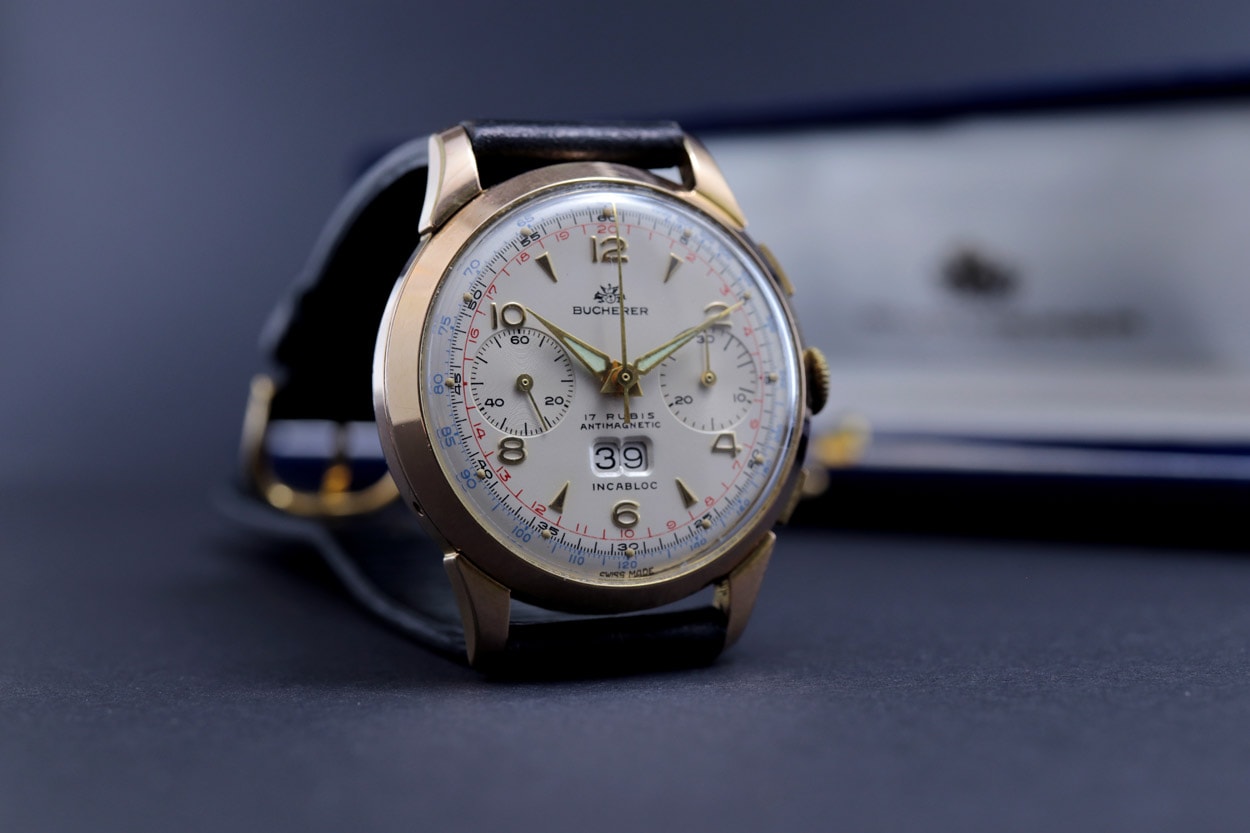 You know the drill

It wouldn’t be far from the truth to say that I just read a thread at some local Italian, French, or German forum while trying to find out more about specific watch references. The more you read (thank you, internet, for Google Translate) and the more tabs you open, you end up with 20 new other movements, models, brands, or references that you HAVE to explore. 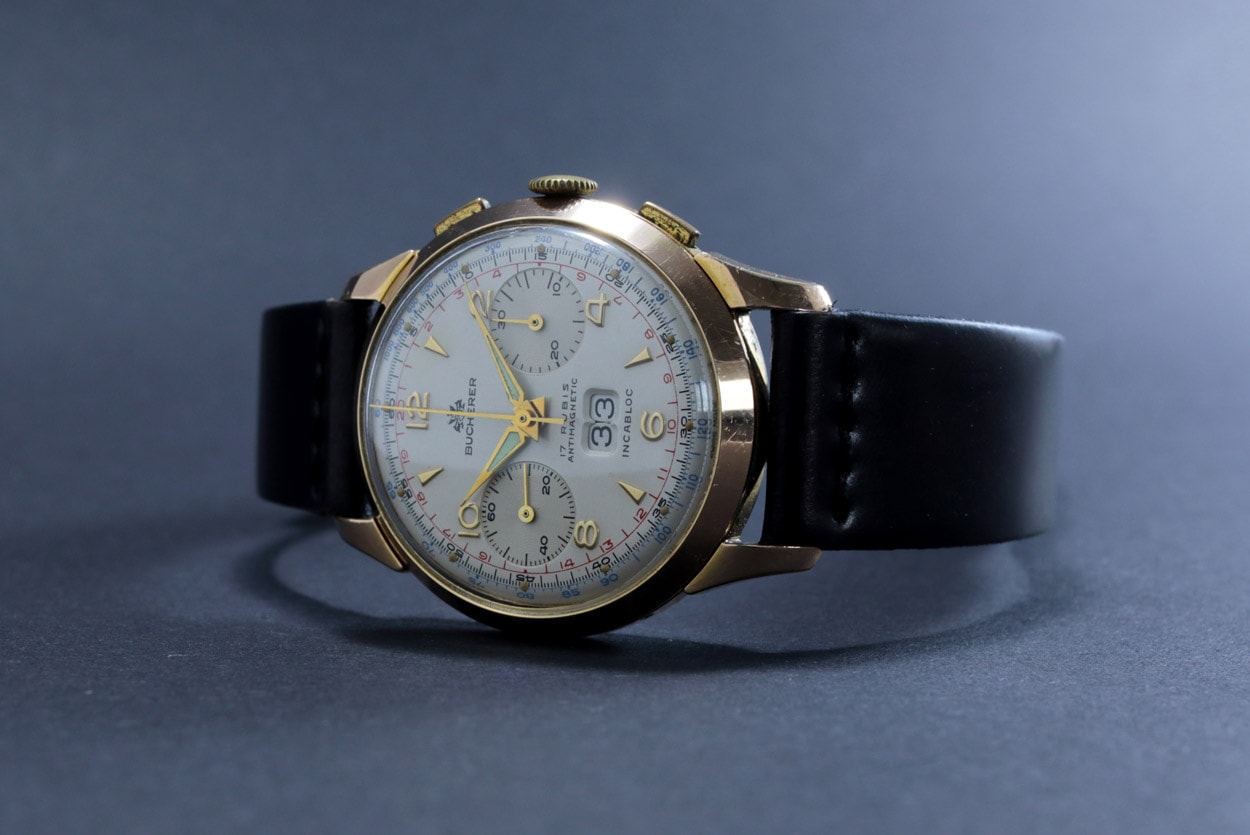 The biggest curiosity — Finding the Venus 211

I clicked on one of my twenty freshly opened browser tabs and my eyes nearly jumped out onto my keyboard. What I saw was one of the most generic and for many too boring chronograph dial designs with two sub-registers. Yet below them, there was a double date cutout made of two rotating discs that were so big I had to double-check that I was looking at a vintage watch. If that wasn’t enough, the digits showed a weird date ‘38’. This was my first encounter with the Big Date Venus 211, and I was hooked. 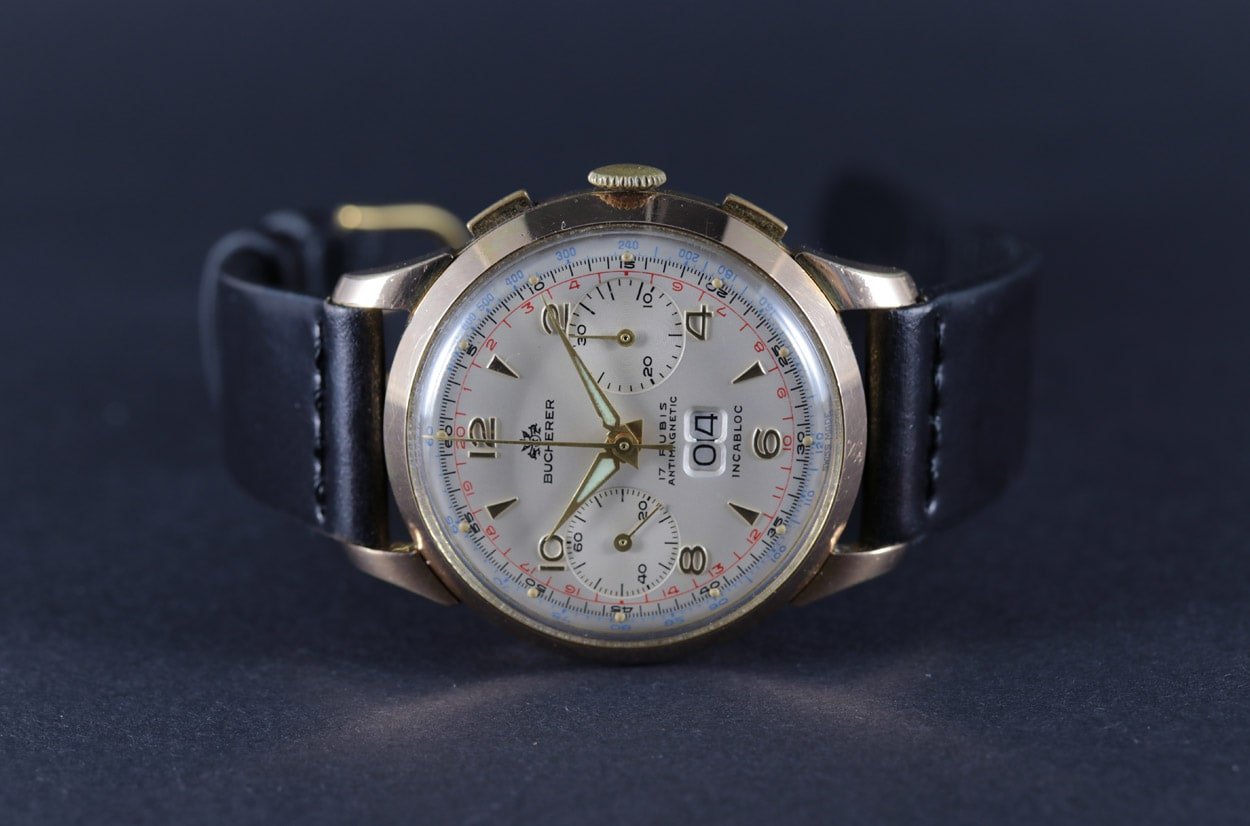 Why the big date?

The famous Rolex Datejust from 1945 was the very first automatic wristwatch with a changing date. Things picked up on speed in the next few years thanks to Hans Wilsdorf’s wife who could not read the date easily. As it should be in a loving relationship, her husband, who happened to be the boss of Rolex at the time, got it all sorted out. Not only did he introduce the magic magnifying “Cyclops” that made reading the date more comfortable, but he also introduced the changing of dates sharply at midnight in the blink of an eye.

Yet the first single-window date dials on wristwatches appeared in the late ’20s and early ’30s, almost 20 years before the Rolex Datejust. The same but considerably smaller circumferential date discs were driven for example by simple calibers with cylinder escapements. If you have an early single window date watch in your collection, you know that reading dates was and still is a bit of a pain. Watchmakers knew it 80 years ago too. Enter the Venus 211. 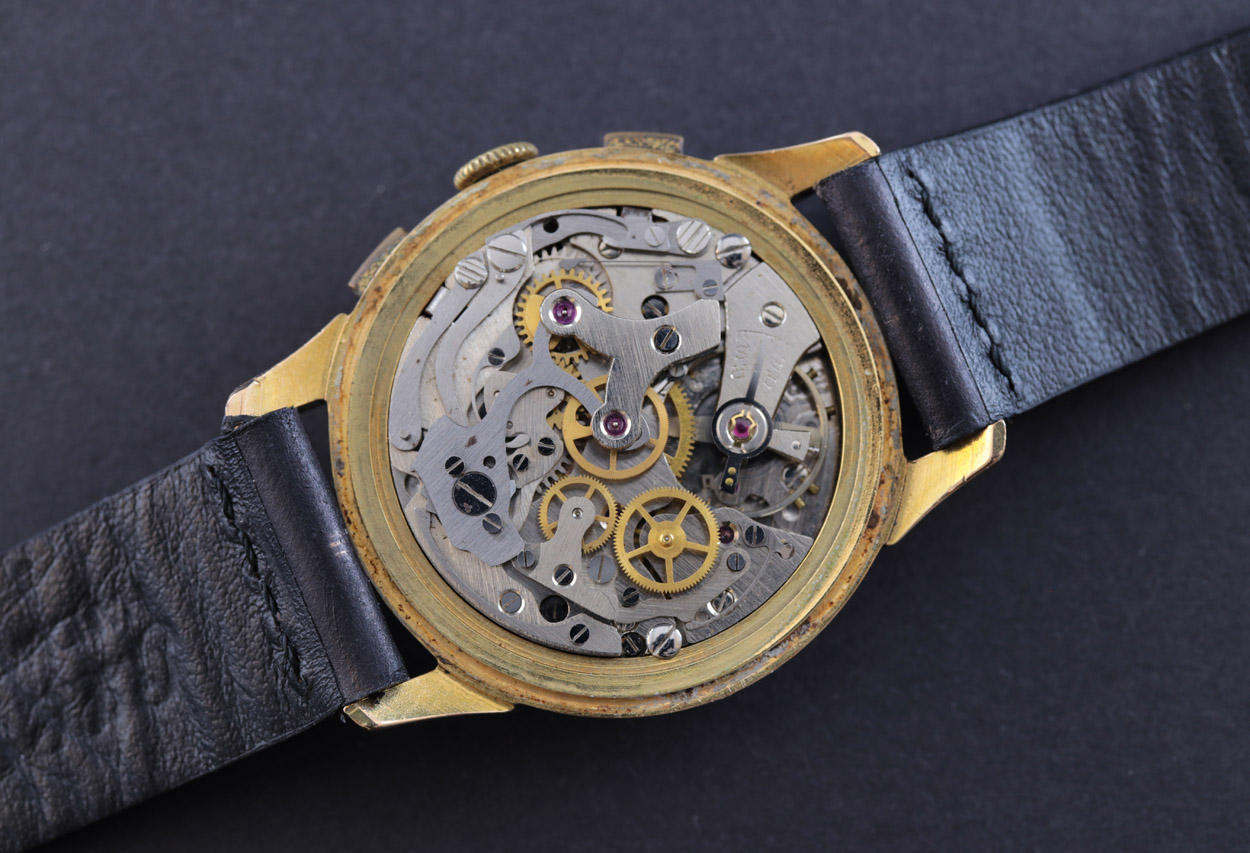 When cheaper is more original

The Swiss movement manufacturer Venus ruled the happy age of admired column-wheel chronographs. Watchmakers consider Venus superior to the major chronograph competitors like Valjoux and Lémania, both in design and function. Their cooperation with Breitling brought some legendary models that an average collector will struggle to put his hands on today. In the late ’40s, however, the demand for cheaper chronographs grew and Venus responded with a series of cam-switched movements. One of them was the Venus 210 movement, which was later enriched with a date mechanism and called the Venus 211. 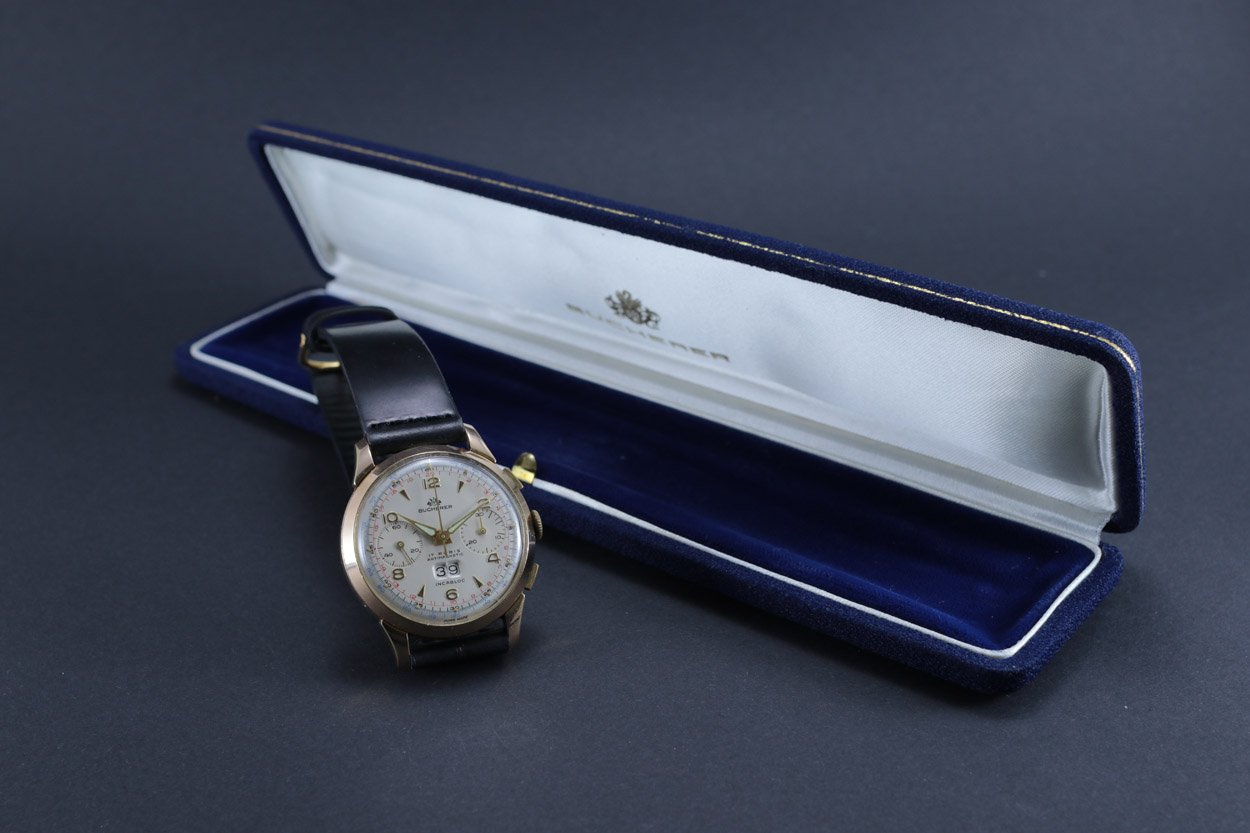 Hunting time for a Venus 211

During my research on the Venus 211, I bumped into many watch brands, including Claude Meylan, Nivrel, Tollet, Unic, Agir Watch, and Delvina. The one that struck me the most was from Bucherer, a brand whose sound and legacy I always liked. I only saw a few existing Bucherers with the Venus 211 online. The one I liked most had round pushers. Finding a Venus 211 Big Date in nice condition is not easy – it took me a full year to find one on eBay. My joy was even bigger when the Italian dealer listed the Venus big date with a Bucherer logo on it. Although the watch has rectangular pushers, it seemed nice and even came with the original box. According to the dealer the watch came from the original owner, a guy working in Lucerne, who bought it in the 60s. 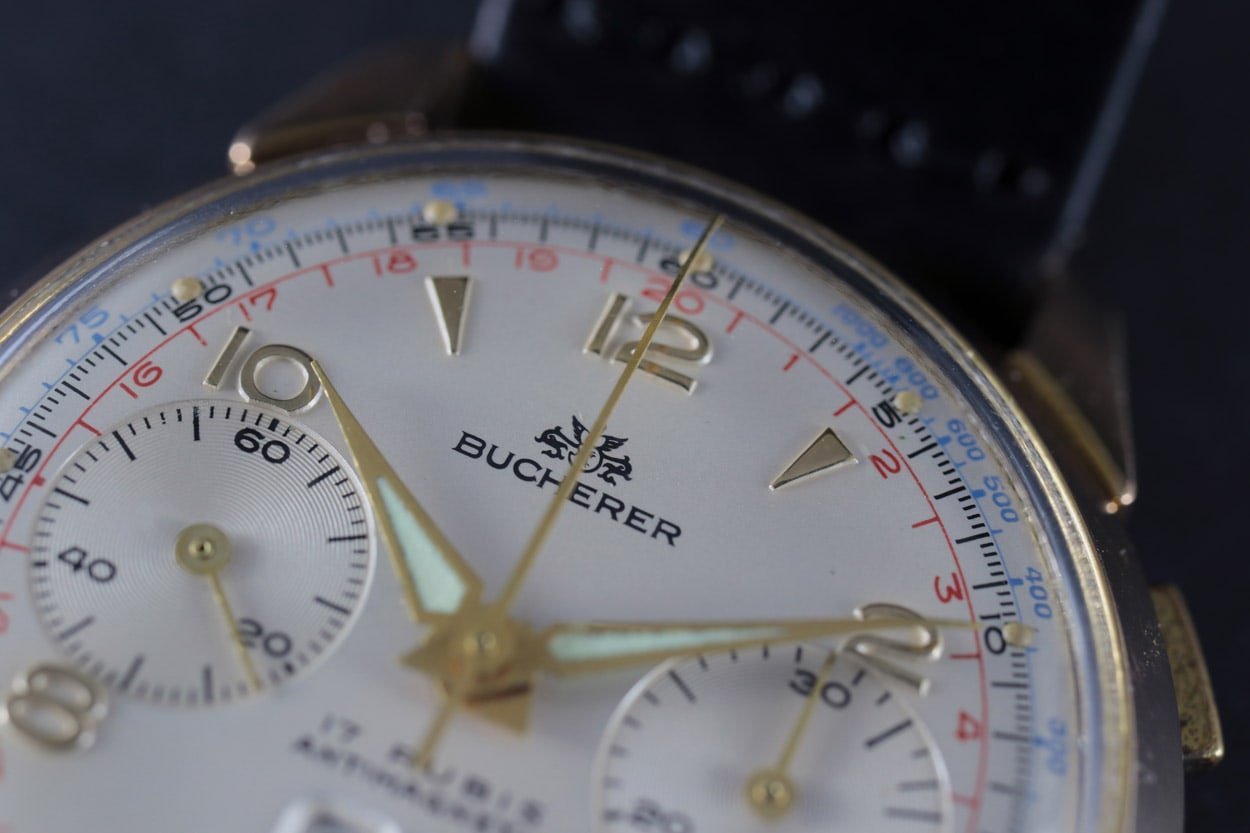 Holding it for the first time

I have to admit, the watch design might be a bit generic and the dial a bit busy on this Bucherer, but the Venus 211 was the true draw. The black minute track is tightly surrounded by an outer blue tachymeter scale and the inner red telemetric scale. If it was up to me, I would go without the telemeter today. Yet what I see as the biggest problem is that all the track lines are of the same thickness, making it easy to get lost when you want to read the exact time with just a quick look. If things weren’t busy enough, the minute track is enriched with lume dots every five minutes. Gold triangular thorn-like markers shine at the odd hours with nicely shaped Arabic numerals at even hours. Factoring in the well-preserved gold-plated case and all hands, quite the dream for a gold-tone type of collector. Too many gold tones are maybe the only reason why this Bucherer doesn’t sit on top of my internal “Top Wrist Time” chart. What pleases my soul most when looking at it are no dirty spots or scratches on the dial in near-perfect condition, no visible marks on the sub-registers, no scratches on the lugs, and no unaccountable deep or surface scars that are often visible on the back or sides due to opening the watch carelessly. 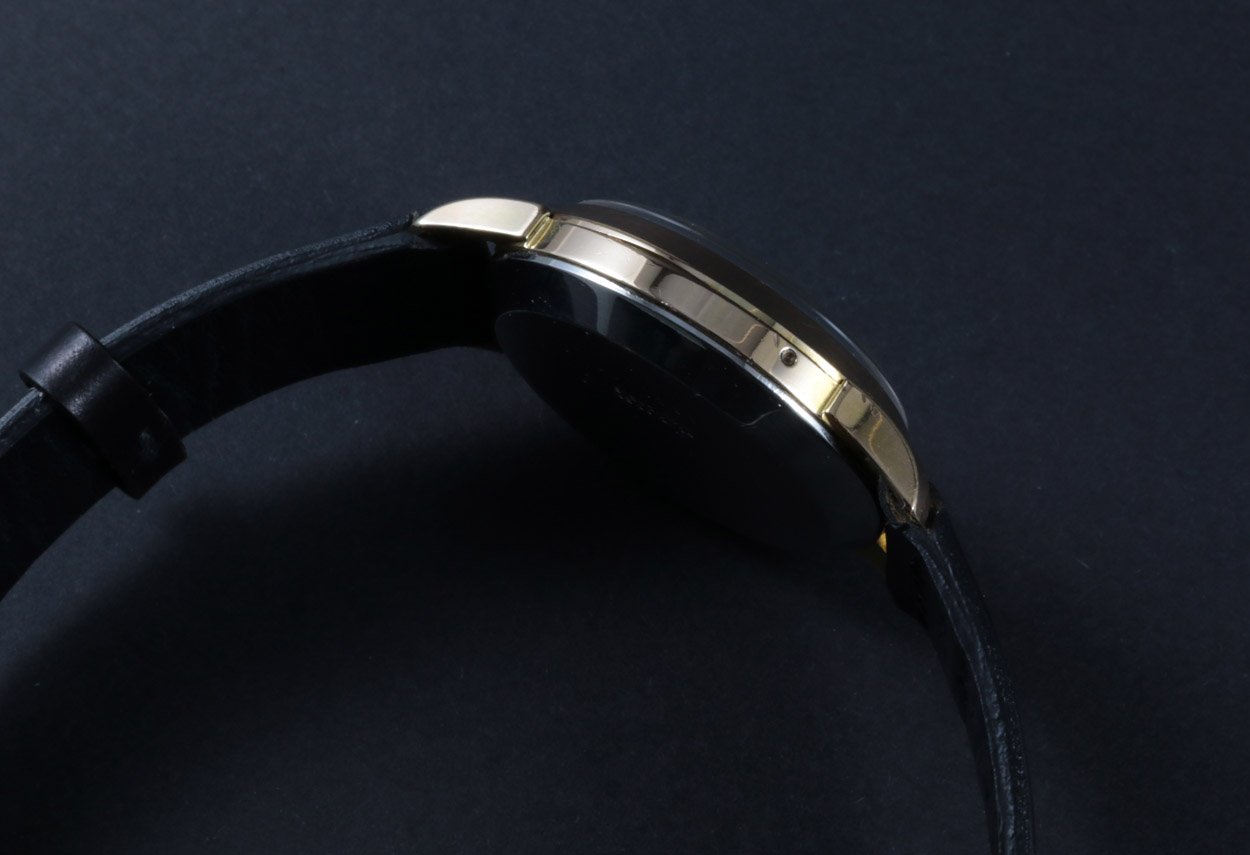 Playing with the date

All shame aside, I would say I stared at the Venus 211 big date with my eyes wide open for hours. Setting the date for the first time was a small ceremony. I started by gently pulling the crown out. Watching the date number jump for the first time made it a somehow new experience in comparison to a date change through traditional date cutouts that are usually just half the size. Imagine the feeling when I put two independent bi-rotating discs into motion with a tiny pin pusher fitted in the side of the case at 8 o’clock. 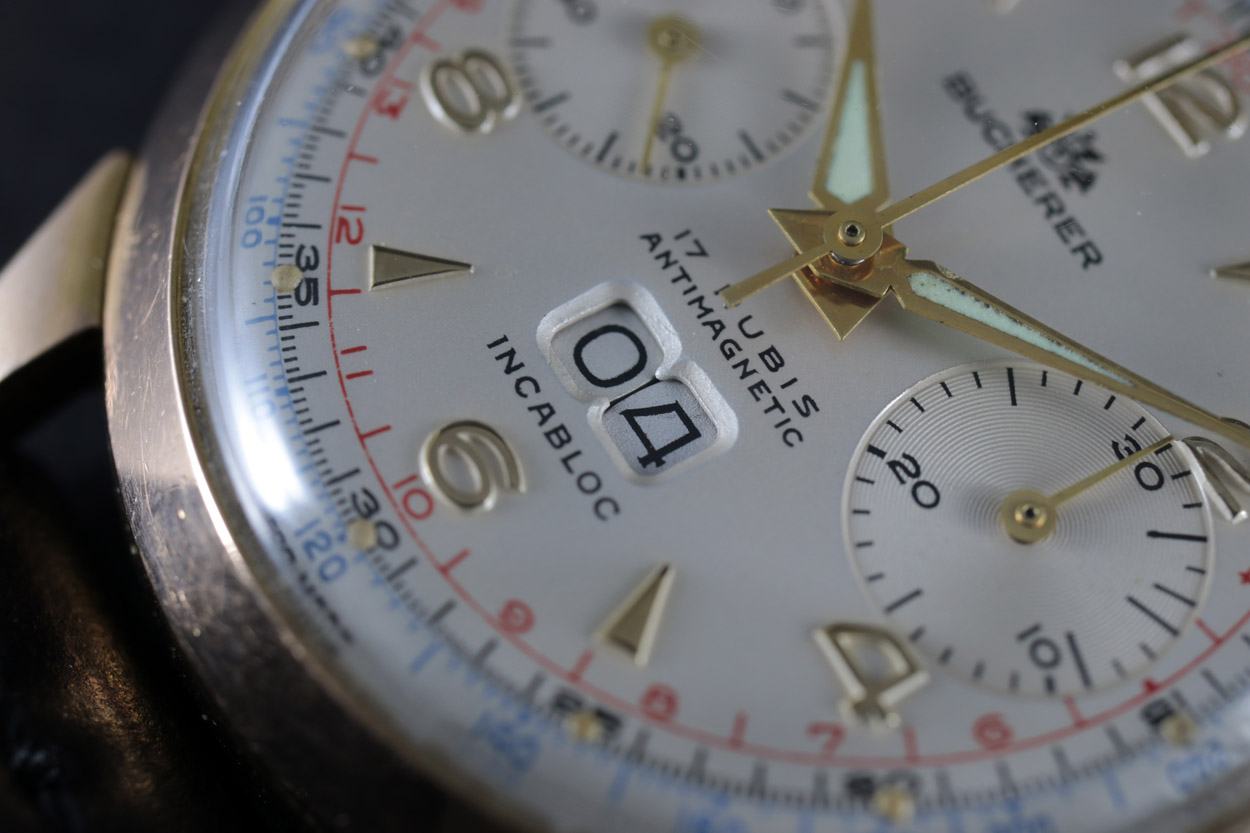 From a construction point of view, in comparison to the modern Lange Outsize Date Mechanism that introduced two discs layered one over the other one in 1994, the Venus 211 differs with no depth effect as the discs are placed at the same level. You can see a tiny gap created where the discs nearly glide into each other. The effect is very similar to the modern Glashütte Original Panorama Date introduced in 1997. It consists of two numerical discs mounted concentrically on the same level. This disc configuration was also seen in Angelus Dato12 models with caliber 255 in the late ’40s.

What watch purists might refer to as the biggest imperfection or defect of the Venus 211 big date is what amuses me the most. This movement counts the date from 0 to 39 instead of 1 to 31, so you have to correct it at the start of every month. Not often does an engineering imperfection make a perfect talking point. 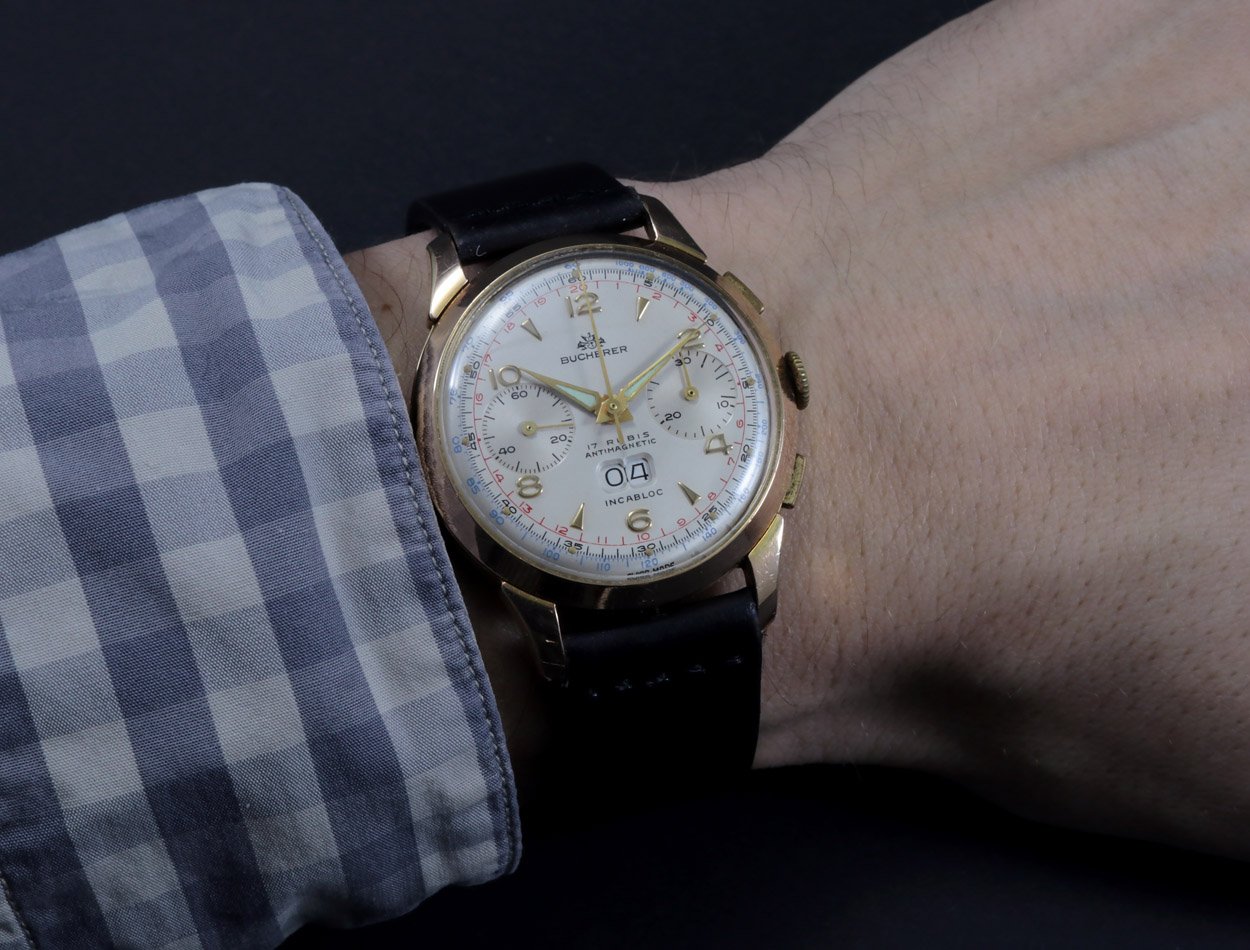 Fitted with a thin and elegant black cordovan leather strap, I like wearing my Bucherer Venus 211 the most when the months are about to change. That non-traditional (if not awkward) date jump from the 31st to the 32nd or 33rd always encourages me to disrupt my own stereotypes, to stop and think. It reminds me not to forget that the human touch makes all the difference. For the record, the Venus 211 is no horological wonder, but its legacy resonates today even more. Anything can be engineered or automated. But for me, this simple big-date movement is living proof of the fact that going the complicated way that requires additional effort might be more fun and engaging, bringing a fresh view to your daily routine. It is so human. 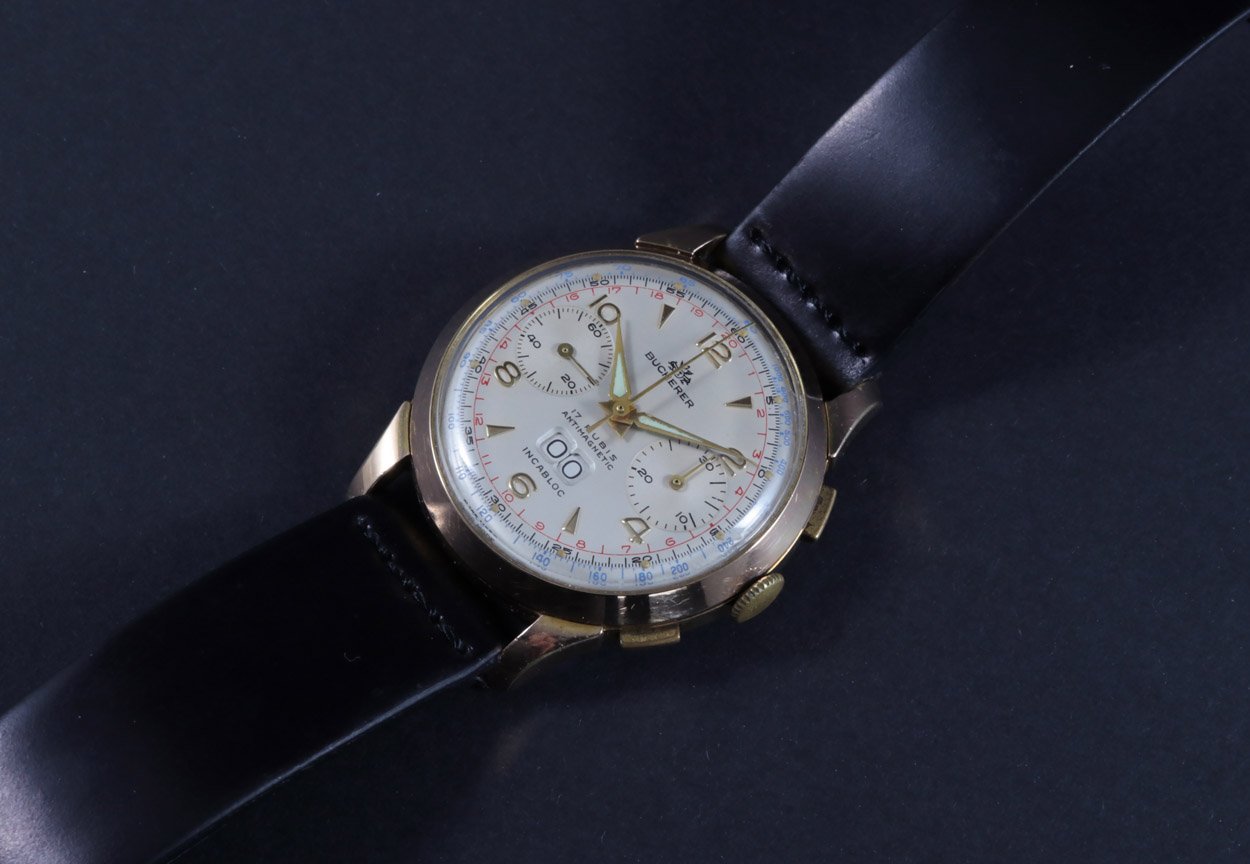 Look at the current production of IWC with its Big Pilot Big Date “150 Years” Edition, the first Big Pilot to carry a big-date complication. Or look at Mido, which celebrated its 100th anniversary by releasing novelties such as the Mido Baroncelli Big Date. One begins to understand that the big date is gaining popularity once again and is righteously considered a complication that has its value. If it was not invented by Lange in the ”90s, the Venus 211 may be the earliest big-date application in a watch. Not bad for a chronograph watch from the ’50s that you can get for under €1,000. 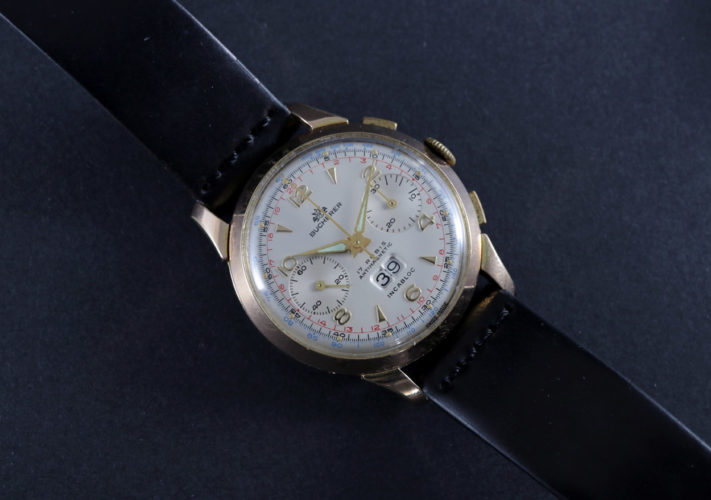 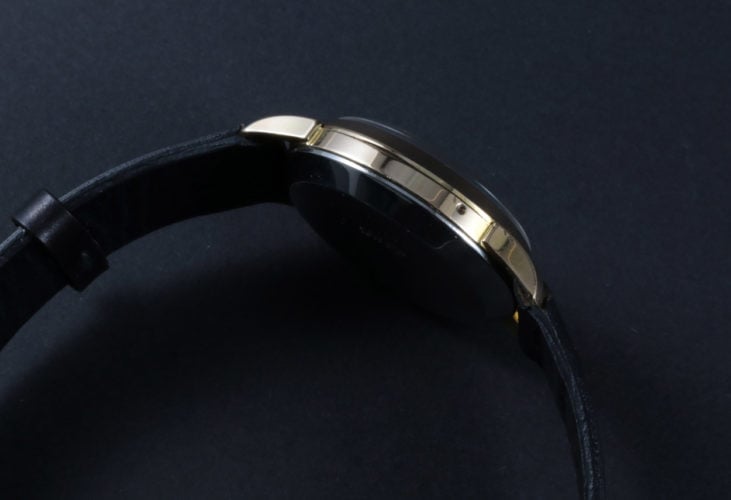 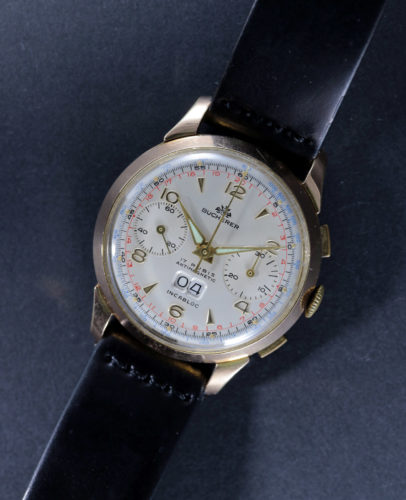 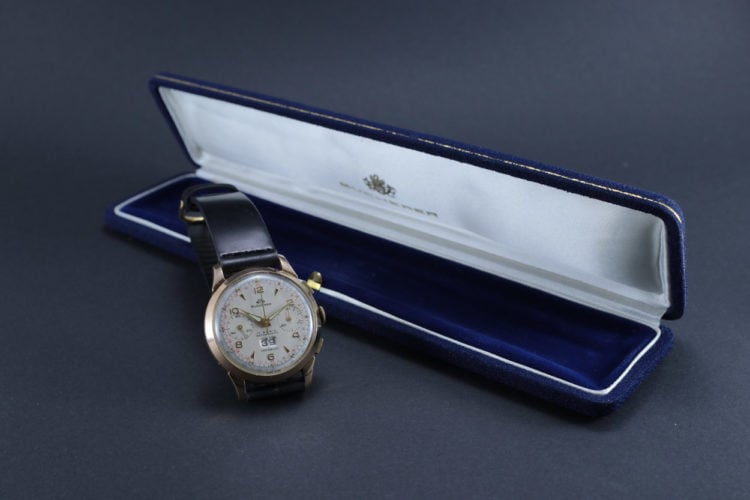 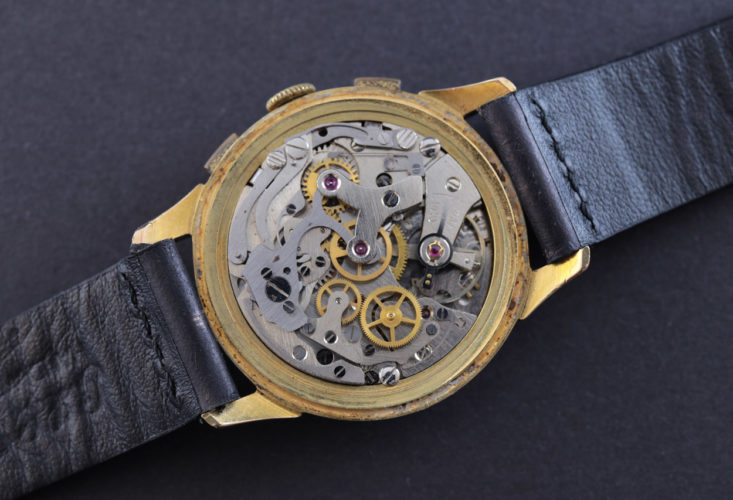 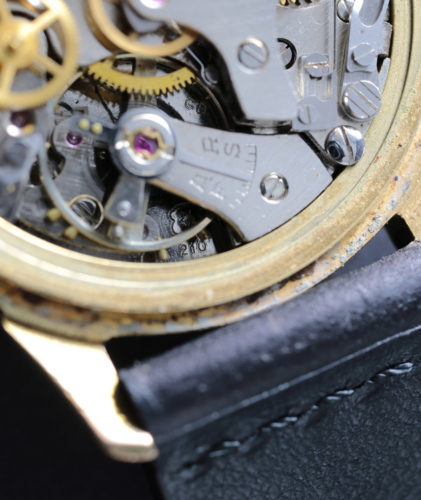 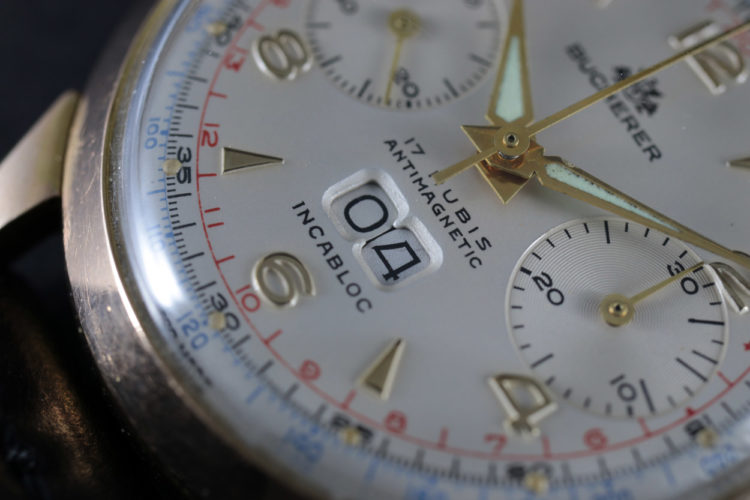 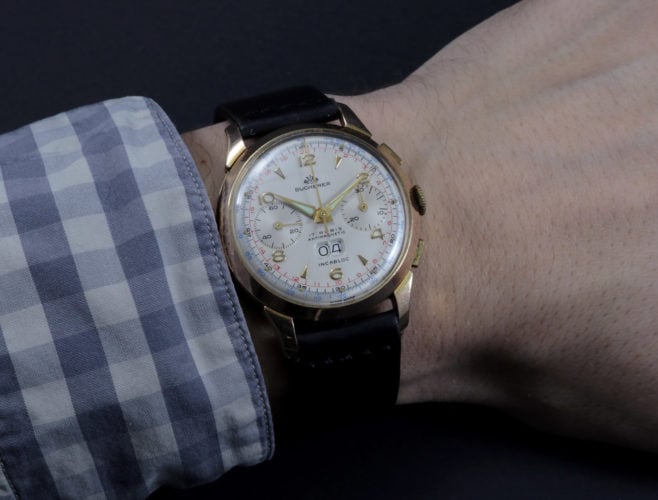 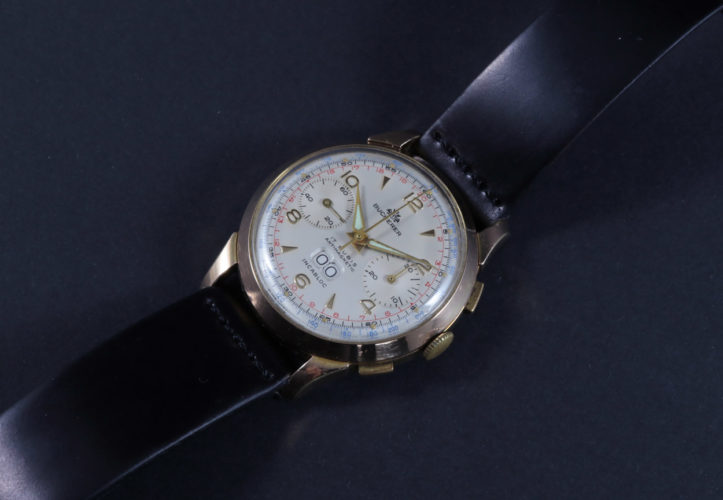 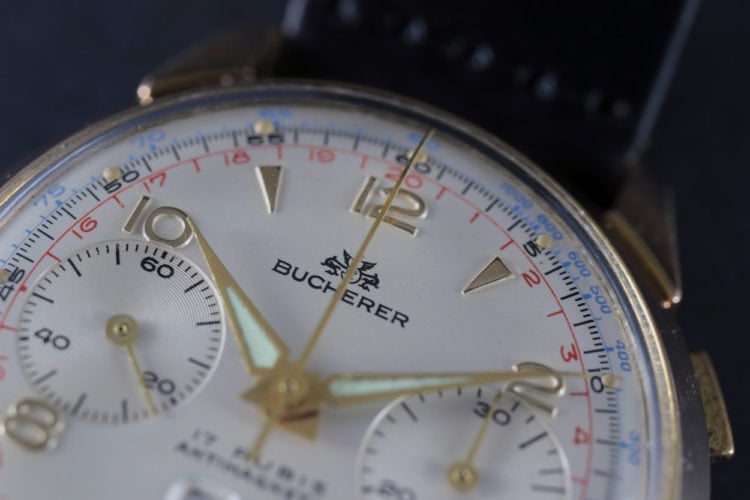 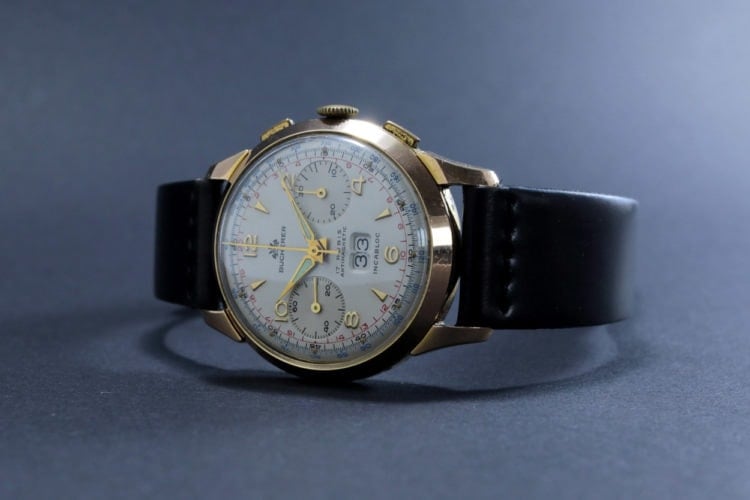 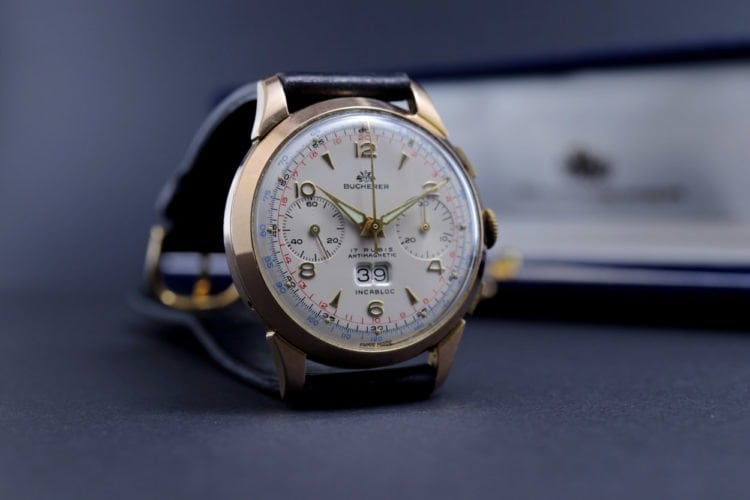 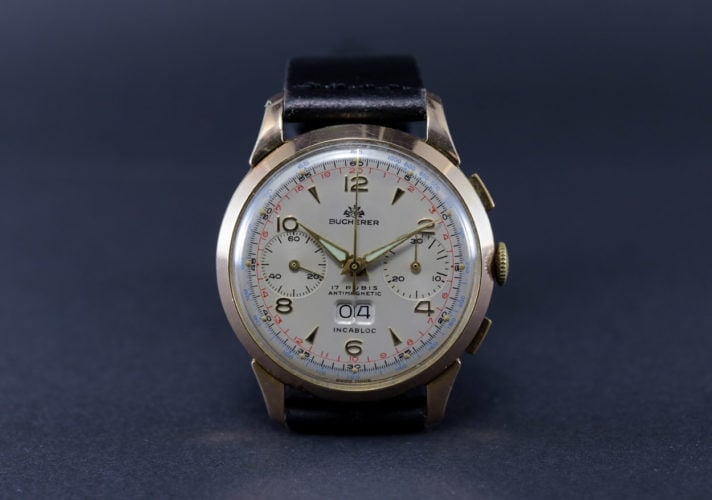 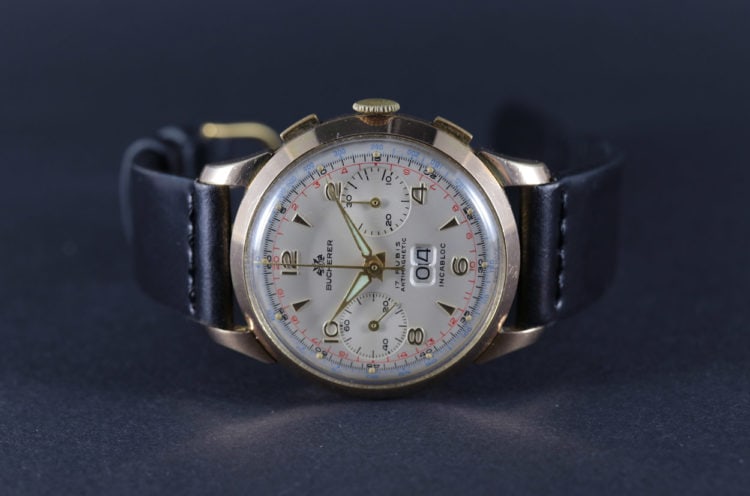 Hot Topics
Introducing: The Omega Speedmaster Super Racing With Spirate System
162 comments
Design Vs. Specs — Which Is More Important To You When Buying A Watch?
86 comments
The Time To Buy Is Now: How The Current Economic Climate Influences Watch Buying And How You Should React
51 comments
My Predictions For New Omega Speedmasters In 2023
48 comments
A Regret-Free Guide To Buying Your First Luxury Watch — Part Three: Higher-End Options From Omega, Rolex, Grand Seiko, And More
48 comments
Popular
Hands-On With The Seiko Prospex Dawn Grey Series
Robert-Jan Broer
12
Omega Speedmaster Hodinkee 10th Anniversary Limited Edition
Robert-Jan Broer
7
You Asked Us: Nomos Orion as a dress watch?
Gerard Nijenbrinks
10