It is the first and only mechanical watch that I ever lost. The fact it was lost for almost a year made me think of it more often than the other pieces in my collection. Even though I didn’t wear it often before losing it, the Tissot Carrousel became nostalgically dear to my heart.

Last year I often came home from the office a bit earlier so I could spend some quality time with my daughter. I always parked the car in front of the flat and rushed towards our afternoon hour of goofing around outside. The last known whereabouts of this Tissot Carrousel were the playground. Anytime we came close to some sand, I always unstrapped my vintage watch and slipped it into my pocket. As you can imagine, the creativity and unpredictability of my one-year-old’s moves were endless. I never thought I could actually lose any of my watches though. 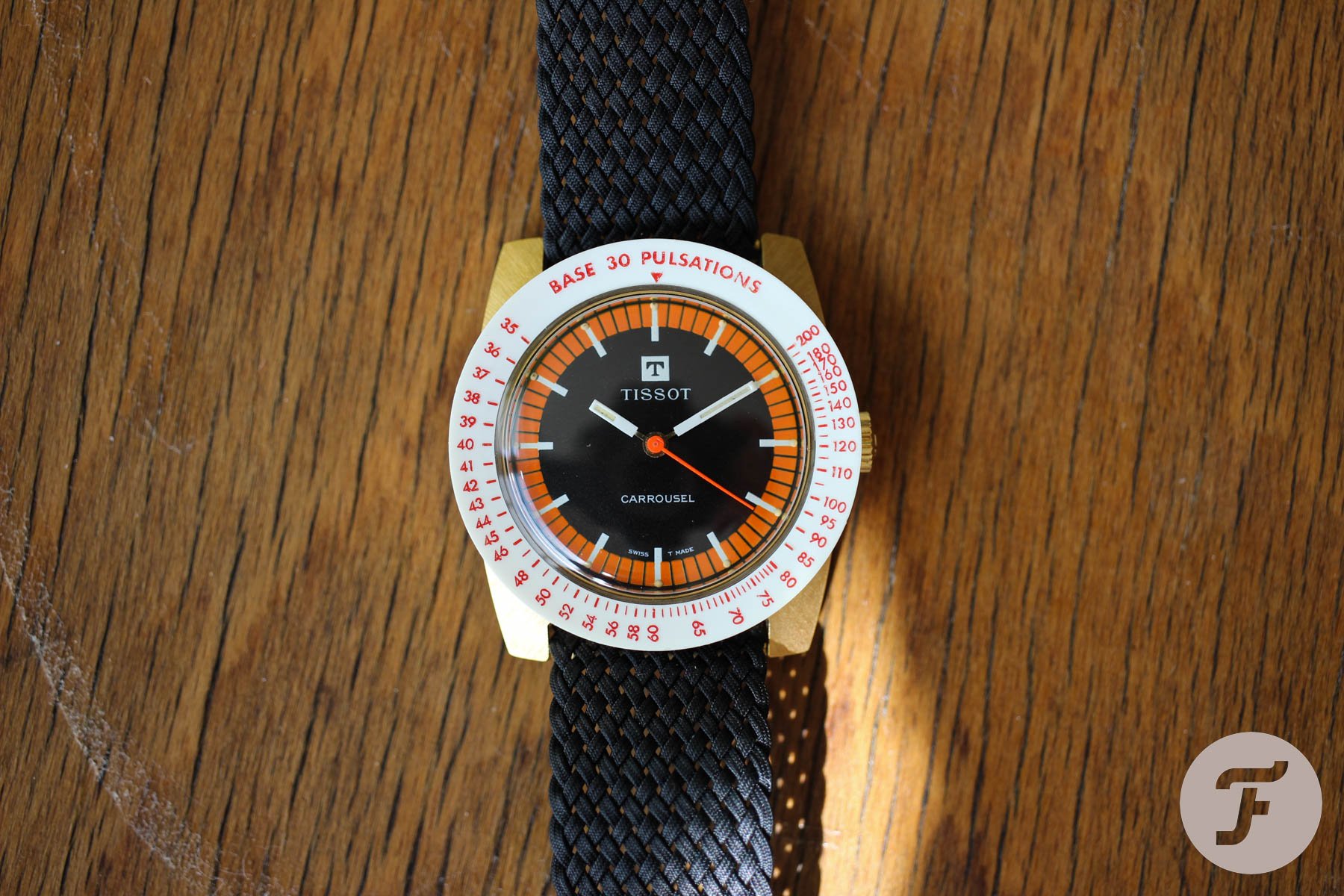 By the time I realized it had gone, we had done so many other things and moved around so much that it was impossible to find it. During every single walk to the playground in the following weeks and months, I found myself staring at the ground, hoping the Tissot Carrousel would jump out of the grass. Ironically I had worn the Carrousel just a few times before that but thought of it much more than any other watch that I wore hundreds of times after. How does the old saying go? You only know what you’ve got when it’s gone.

Of course, it’s still “just“ a watch, but it reminds me to be super conscious of my vintage pieces. My sorrow was even bigger as it was one of the few carefully selected watches my wife wore during our wedding weekend. She loved it even more, as it was as shiny and playful as only my wife can be. After a few months of naive hope, I accepted that our Tissot Carrousel is gone forever.

You can imagine how many times I analyzed that afternoon the watch got lost. I know I am always careful, but I couldn’t find it. I turned our flat upside down like three times. So did my wife. A year later, when searching for something else, the Tissot Carrousel magically reappeared. It was hiding at the bottom of our stroller bag that I had searched through 100 times and that we use every day. It was a confounding miracle and a lesson to protect your vintage pieces. 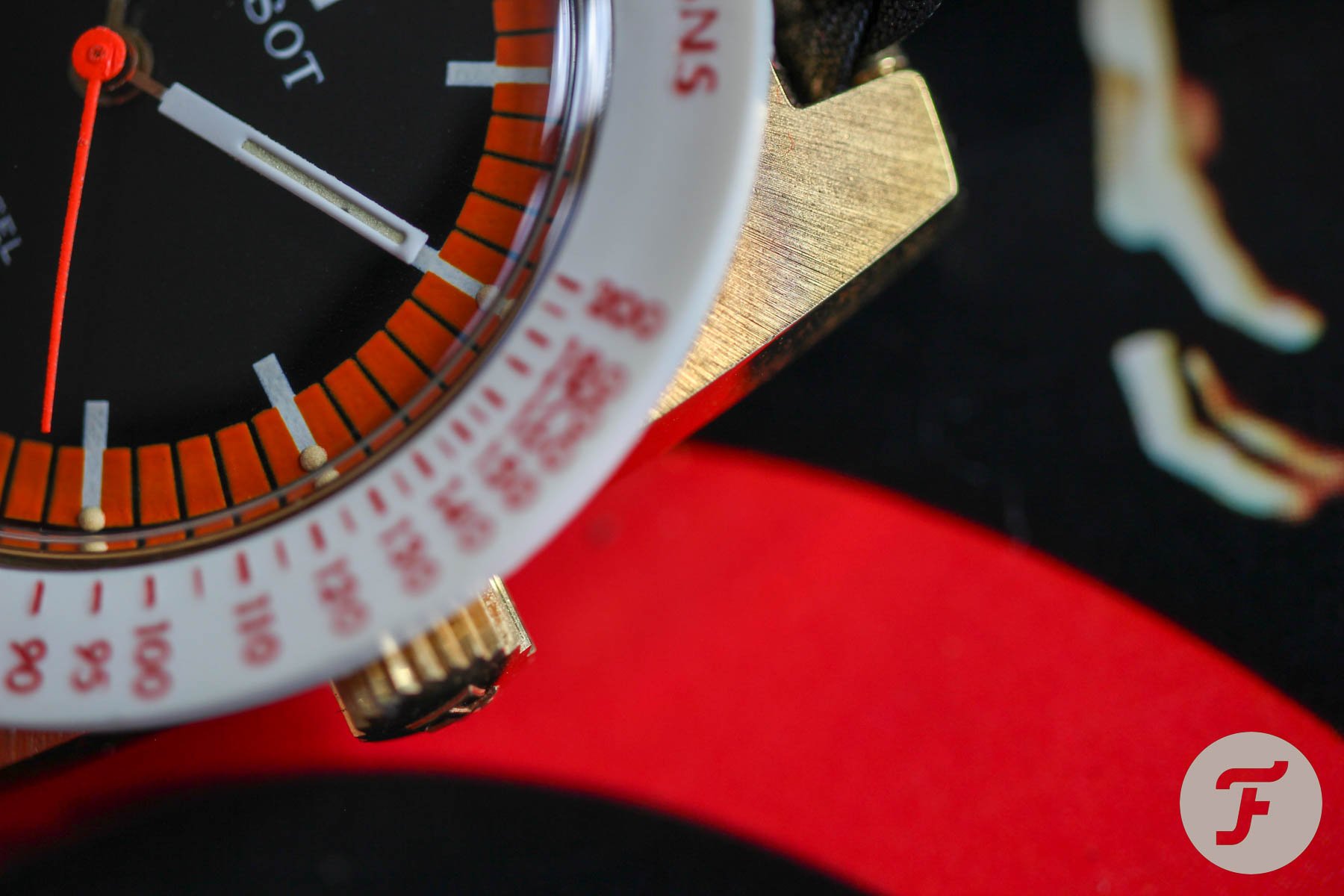 Back in the game

I already had some watch strapped on that morning, but I took it off immediately. No matter the acquisition price, even a Rolex GMT Master would have to bend the knee. I thoroughly enjoyed the Tissot Carrousel on my wrist throughout the rest of the day. And the day after that. The Carrousel does not resurface very often and our piece is in superb condition. It looks like it has never been worn. The gold plating even looks like it has never seen the sun before. And the sunburst effect doesn’t have a single scratch on it. While I prefer the steel version in 98 out of 100 watches, the Tissot Carrousel represents the highly regarded minority. The gold coating fits it perfectly, underlining its light, free, and creative spirit.

I think I’ve already said it, but I will repeat it again and again. Tissot is an underrated vintage watch brand that never ceases to amaze me with the variety of its production. The Tissot Carrousel is another truly bright and colorful example of fresh thinking from the end of the 1960s. An attempt to change a watch into a fashionable accessory with interchangeable elements isn’t a revolutionary concept. Yet judging by today’s scarcity, I assume that the Tissot Carrousel wasn’t broadly adopted. I guess it was too novel and it wasn’t quartz. Gucci took full advantage of the idea later and made quite a popular clone. What I like about the Tissot Carrousel though is that it looks good on a man’s wrist too. 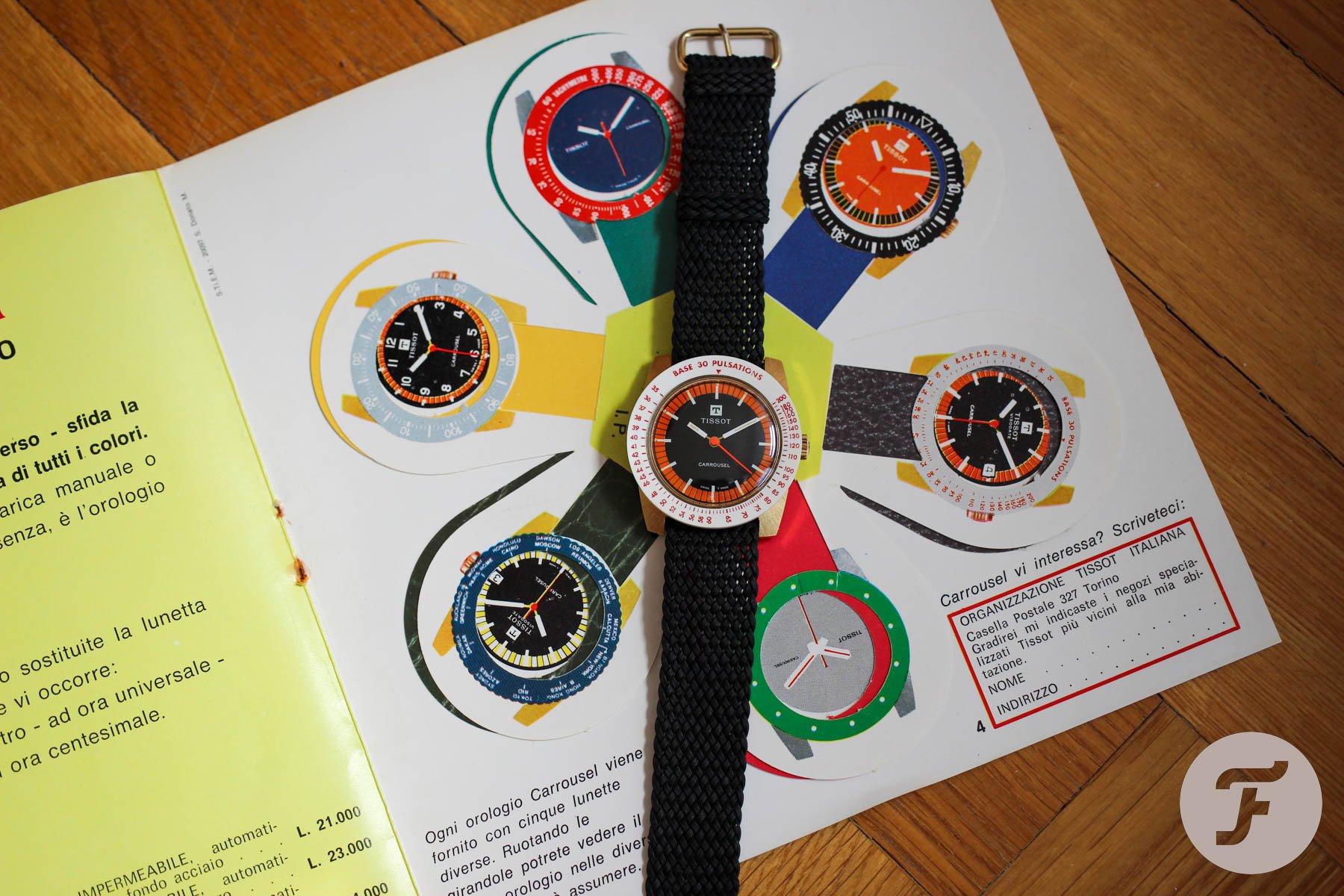 If you want to revel in an oddity from the end of the 1960s or the early 1970s, just turn on the promotional clip for the new Tissot Carrousel. “The anti-watch for the anti-conformist,” was the narrative Tissot chose for one of the promotional brochures. The fashionable aspirations are also probably the best explanation for the French Carrousel spelling. Just keep this detail in mind if you embark on the quest to track one down online.

There were multiple Carrousel models available and all offered customers the option of easily transforming their watches with a set of interchangeable bezels. Interestingly enough, the Tissot Carrousel was introduced in 1968, the same year the Summer Olympics took place in Mexico City. The five bezels almost look like a tribute to the Olympic rings. The Tissot Carrousel I grabbed came fitted with only one and probably the most striking of them all, the pulsation bezel. Online research reveals that the Tissot Carrousel came in a nice box with all the bezels standing out in two rows. The four other bezels include a tachymeter scale, a worldtimer scale, a minute track, and the decimal scale. 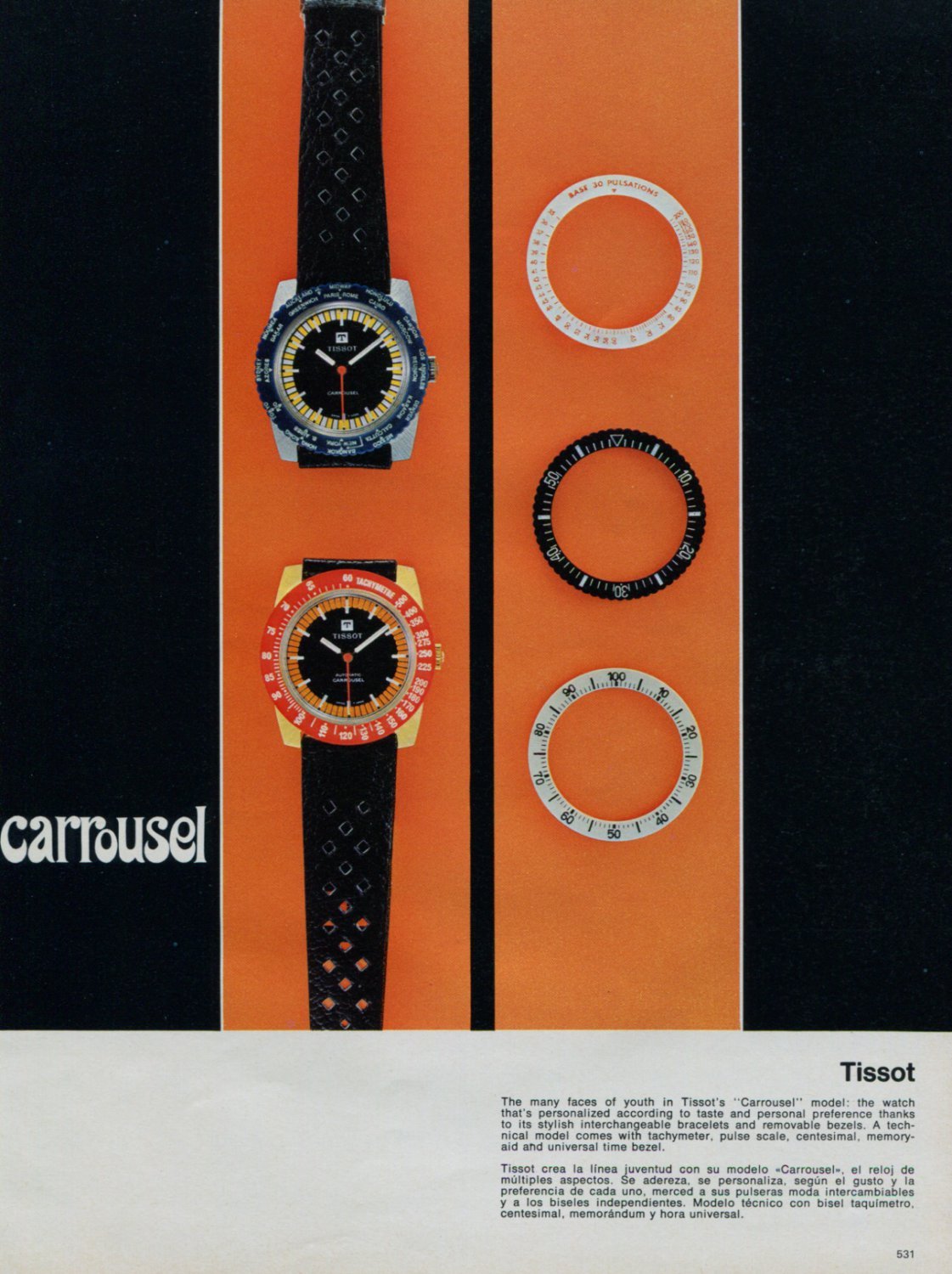 What I like in particular is to study available vintage adverts and catalogs. It often gives a new perspective or brings facts you can‘t find on forums, such as refreshing some linguistic terms long forgotten from the era the watch came from. See the above print and notice a few details: it suggests that this dial version was referred to as a technical model. I also like that the minute track bezel was introduced as a memory aid bezel, which is perfect naming for the typical daily activities we use it for. Last but not least we have the so-called decimal track academically titled the centesimal bezel.

From all the designs out there, the brick-like minute track dial is my favorite. Compared to simple dials with no tracks at all, this one looks like a serious watch. I look at the color set and I see that the Tissot Carrousel doesn’t want to sit in the corner. The watch hands, including the tail-less central seconds hand, are quite familiar to us from the Tissot Bond watch PR-516. 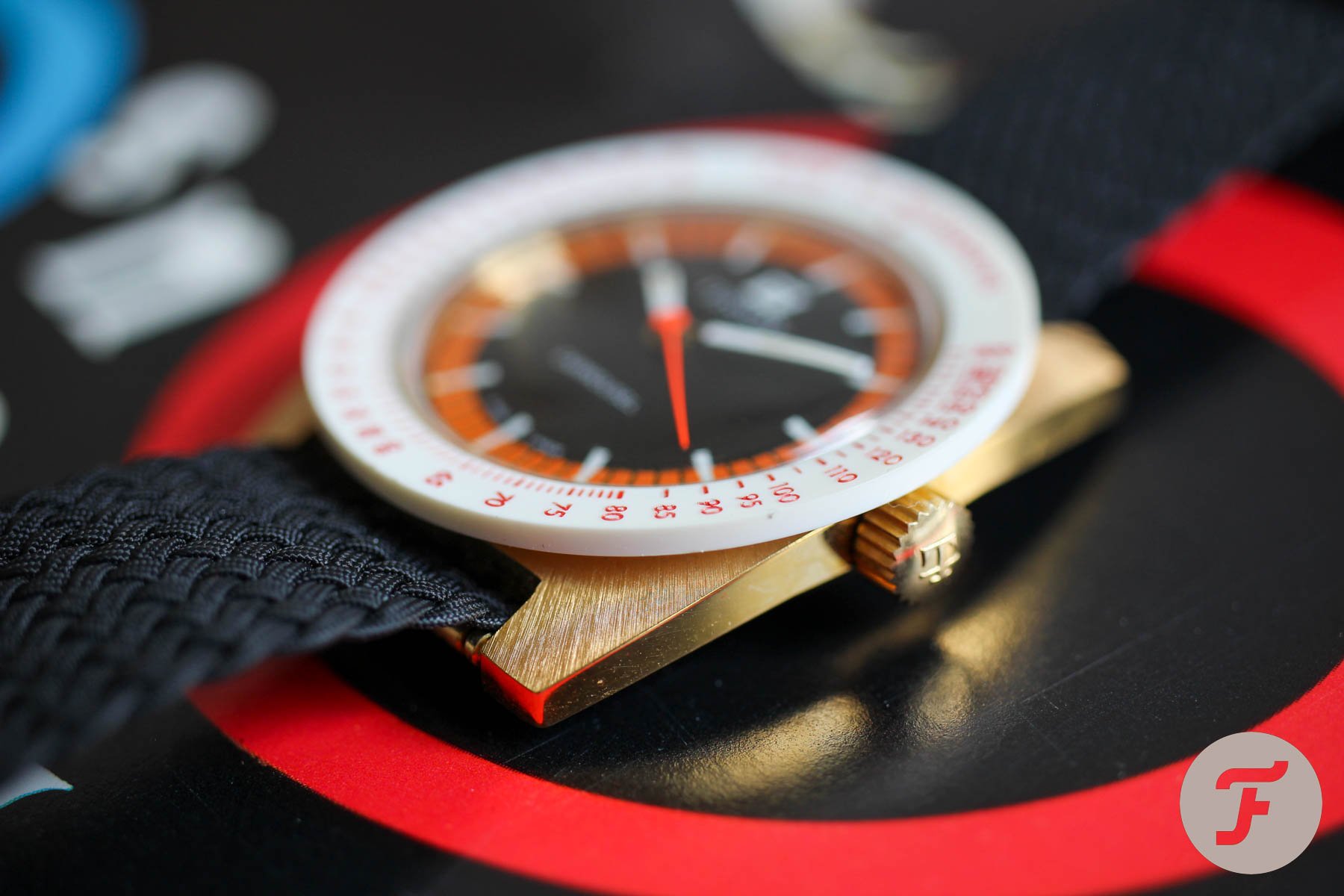 As shaky as the idea of interchangeable bezels sounds, the bezel holds in place firmly. It clicks in and out perfectly when the right amount of pressure is applied. The squared T-logo on the dial looks majestic. I’m sure it will please you to also find it on the thick crown. The reason why it is so thick is pretty prosaic. The bezels are quite wide and bleed over the edge of the case. Another tiny but important detail is the shape of the bezel. It slopes down similarly like bezels on the Breitling Superocean or the Rado Captian Cook. This stadium-like styling of the bezel with a 35mm diameter gives the Tissot Carrousel a really crispy look. The Tissot Carrousel is powered by a standard 781 caliber. See the case back that features the number of the special key needed to open it.

I grabbed my Tissot Carrousel for a few hundred euros, but I already witnessed a recent €1,000 purchase at a premium dealer. And it was not even the full kit with all the bezels. As a part of the fun, I recently bought an interactive brochure that features all the dial and strap styles. The Tissot Carrousel is a funky little watch that will forever serve as a reminder to be careful about any watch in my collection. I hope that with a bit of patience I will also find the box with the rest of the missing bezels. Happy hunting!

Hot Topics
Introducing: The Omega Speedmaster Super Racing With Spirate System
162 comments
Design Vs. Specs — Which Is More Important To You When Buying A Watch?
86 comments
The Time To Buy Is Now: How The Current Economic Climate Influences Watch Buying And How You Should React
51 comments
My Predictions For New Omega Speedmasters In 2023
48 comments
A Regret-Free Guide To Buying Your First Luxury Watch — Part Three: Higher-End Options From Omega, Rolex, Grand Seiko, And More
48 comments
Popular
Hands-On Grand Seiko SBGA373G (Spring Drive) Review [VIDEO]
Robert-Jan Broer
14
Why Are There No Stainless Steel Rolex Watches Available?
Robert-Jan Broer
121
An Overview: The Tissot Chemin des Tourelles Watches
Fratello