Only three watches, but a lot of style, individualism, and charisma. Today more about the sharp-edged rotating UG Cabriolet watch, the timeless Futurematic with a surprisingly high price tag, and the first European electric watch LIP R 27. Let’s go!

Want to know why we didn’t feature a vintage watch (wish)list for October? Because I continuously fail at one of the rules of sane collecting – one in, one out. I believe this rule is a good principle, and honestly, I plan on sticking to it. My only problem is that I am not sure at what stage I will start to apply this rule. So if you’ve read the #TBT articles over the last two months, you know I haven’t stopped growing my vintage watch collection. But let’s take a short break for now to share some picks that are still missing.

If you always dreamt about owning a classic convertible car, but haven’t realized it yet (for whatever reasons), here is an idea: The Cabriolet watch. 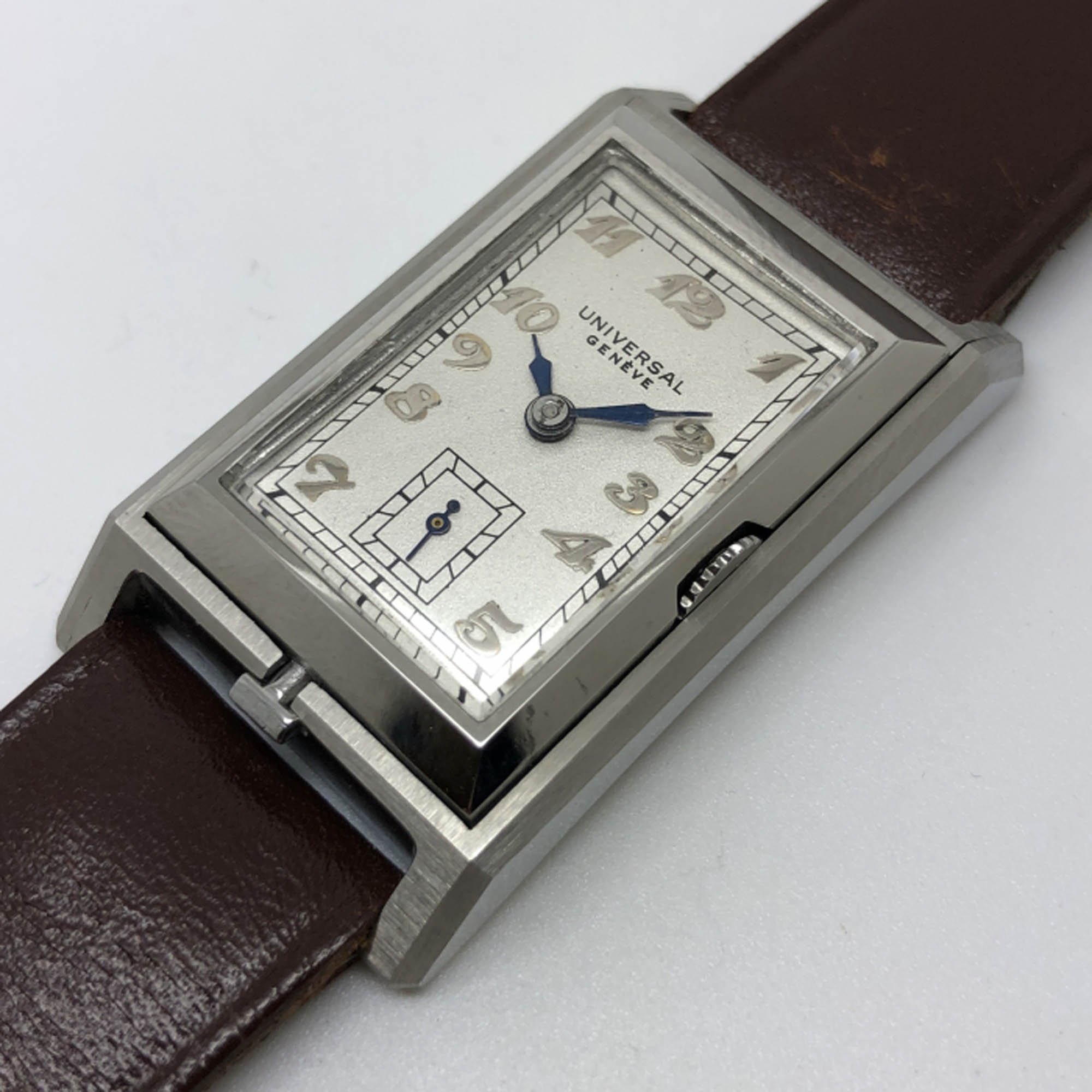 Collectors usually keep the 1931 Jaeger-LeCoultre Reverso high on their convertible list. Yet the spectacular Cartier Tank Basculante that came two years later often comes to challenge that pick. However, there is also the third watch in this category that is trickier to find: the Universal Geneve “Cabriolet”. Pardon my French, but I find it very easy to compare the Basculante with the Cabriolet. With a smaller case that sits perfectly in the larger outer frame, the UG Cabriolet looks more elegant. The opened face also gives the Cabriolet a more decent look compared to the Basculante. With an extra frame, three in total to be precise, the Basculante ends up looking more like an attic window when compared to the Cabriolet. 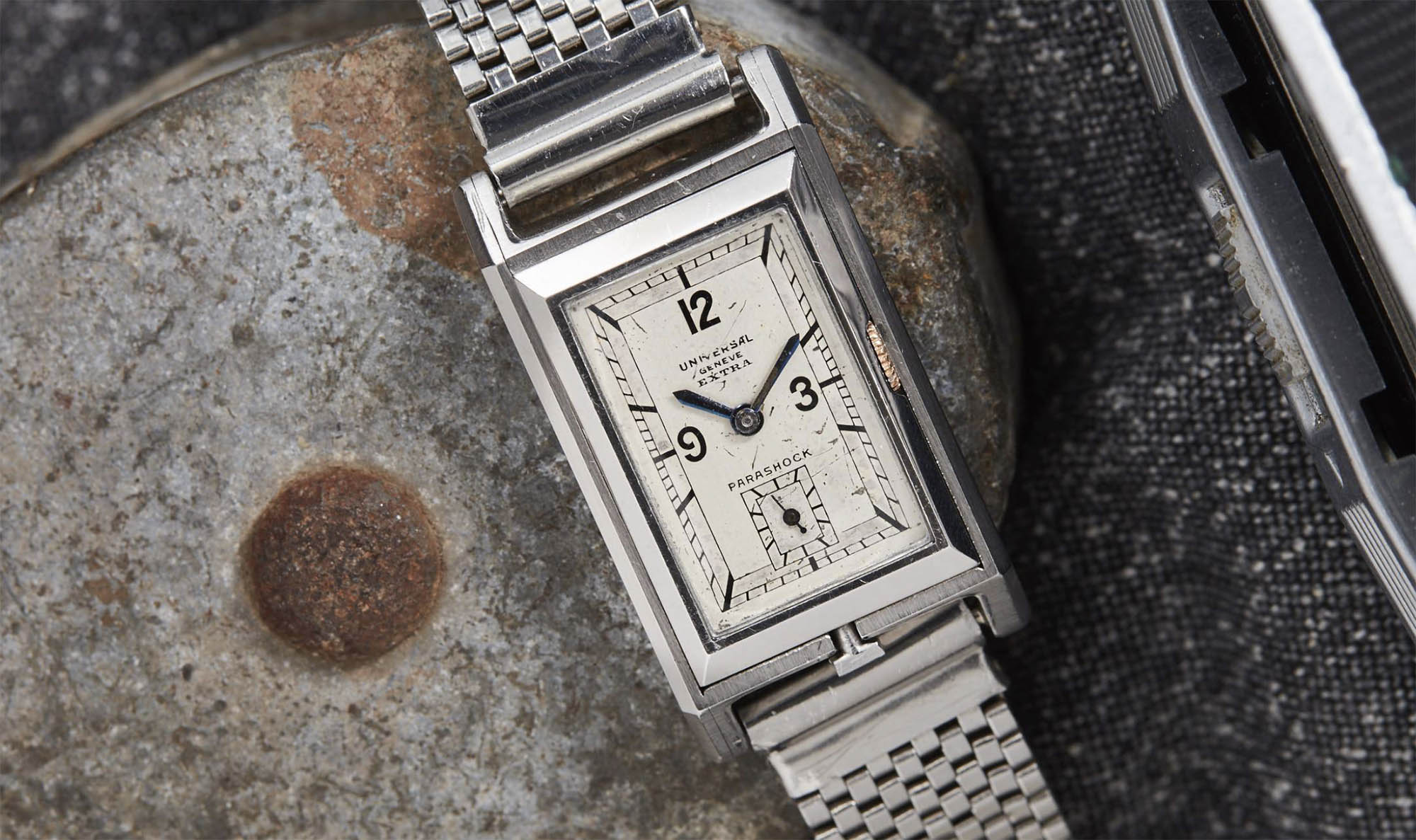 The mechanism is simple. A small t-shaped lever attached to the case under 6 o’clock allows you to lift it from the outer frame, rotate it, and then snap it back into its position. When I close my eyes, I picture myself 90 years ago, doing some semi-dirty job, flipping the case around to protect my watch. If I had 12.000 Euros to spend, I see myself doing it next week too. And there is still one UG Cabriolet available at this Italian dealer here. It has been available there for quite a time, might be due to the reason that it is not listed using relevant keywords. But here we are, doing the dirty work for you. There are beautifully detailed pictures showing the mechanism in multiple positions, enjoy. And please, if you go bazooka and decide to invest in a Cabriolet watch, let us know. 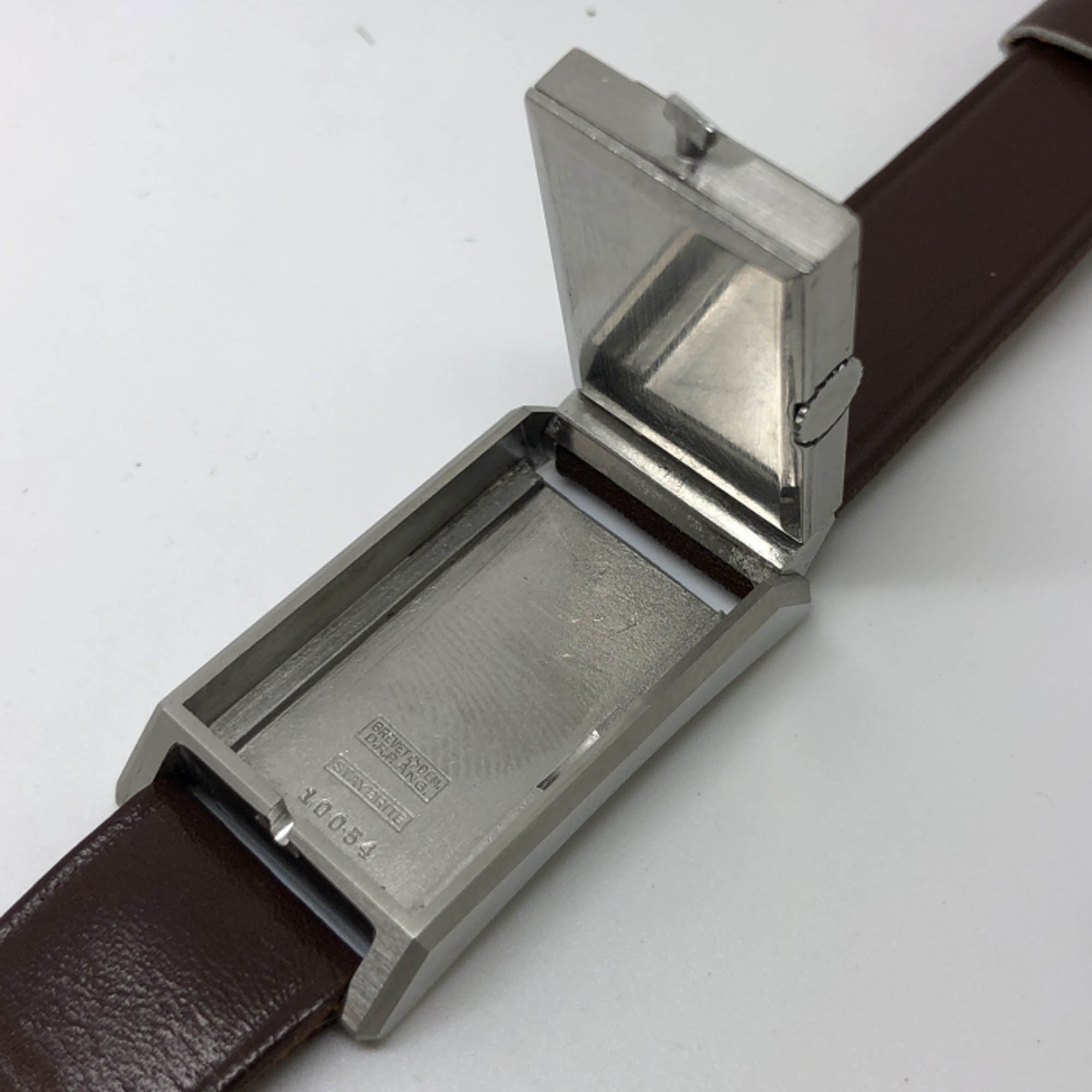 Looking for a 35-37mm diameter watch? Did you ever consider a watch from the Futurematic family? 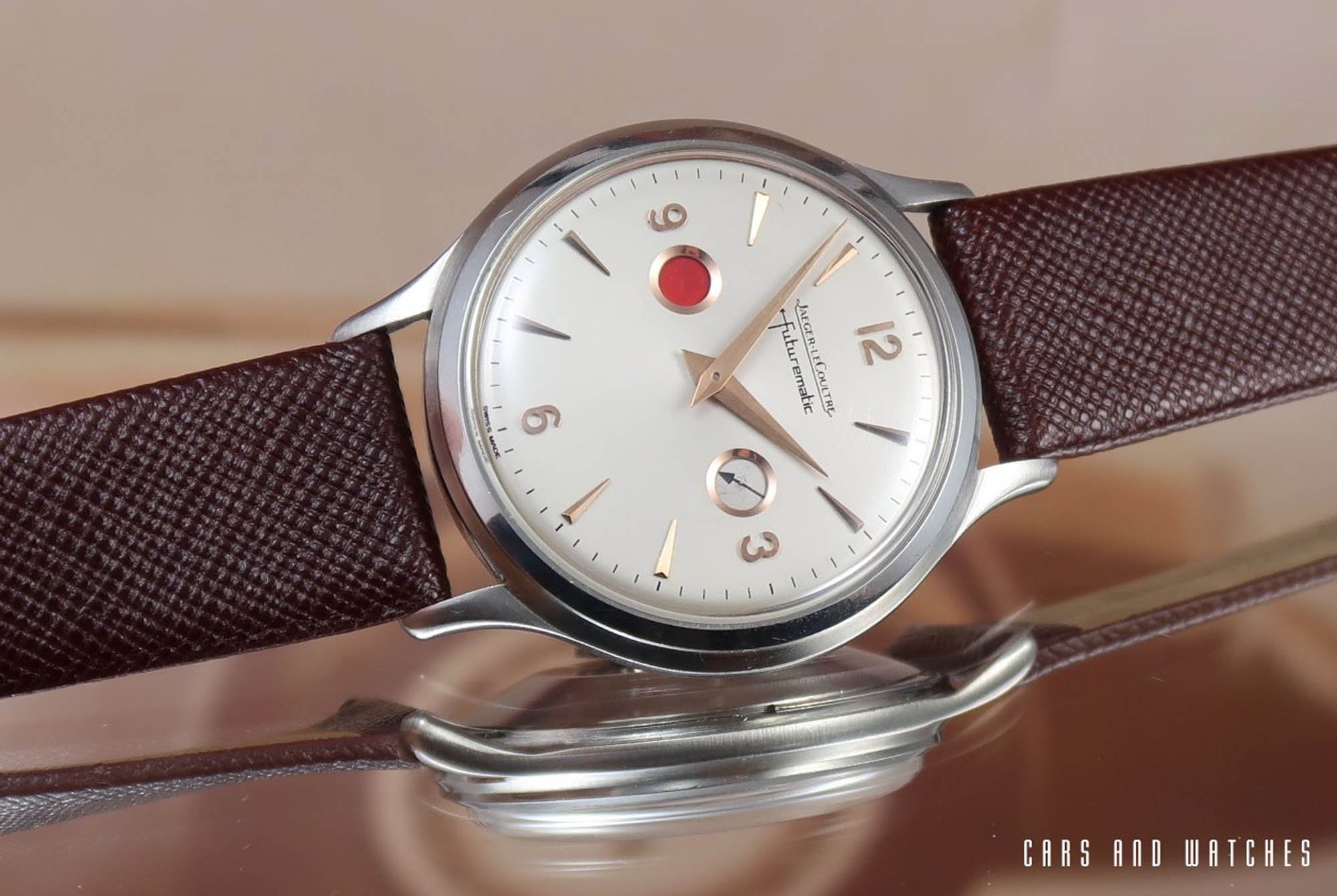 The disruptive portholes are in such contrast with the dial and hands design, that it looks as elegant as Bond’s tuxedo.

It could easily wing up being a long read if we were to write down all the important details on Futurematics, so let’s stick to the basics. The Futurematic can be found in two major dial designs. The earlier ref E501 comes with a small second and power reserve on two quite big sub-registers. To put it simply, with just a few markers and no numbers on it, it looks like a chronograph dial that got robbed. The later ref E502 is the one we want. The Porthole nickname summarizes it pretty well. 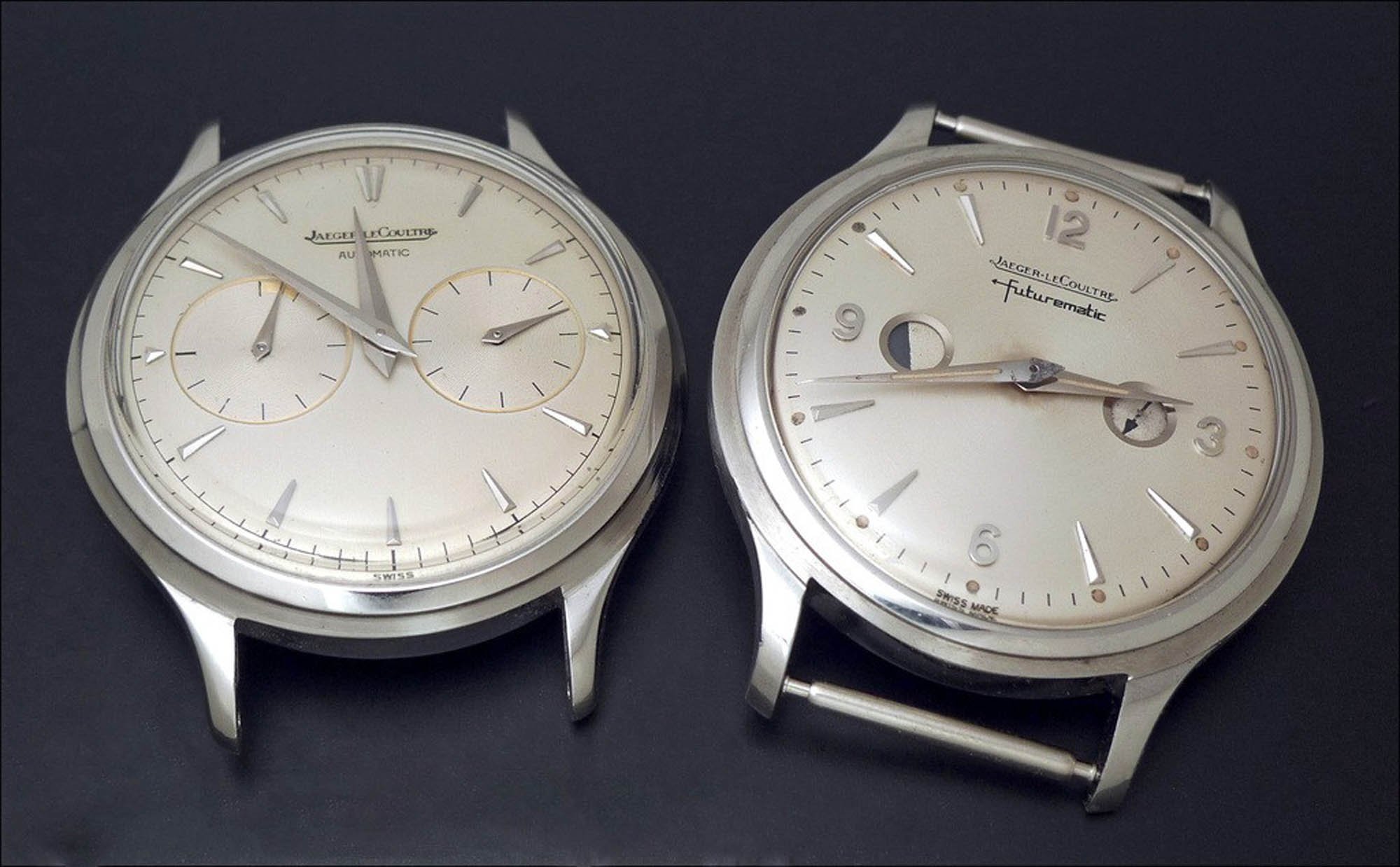 Porthole. There are only a few very specific names or nicknames that encapsulate the spirit of a watch so well. The boring, or if you prefer obvious sub-registers on the E501, are substituted by two portholes that are sized, placed and styled in a way only sci-fi movies from the late 1950s could have done. The disruptive portholes are in such contrast with the dial and hands design that it looks as elegant as Bond’s tuxedo. We find it very attractive. 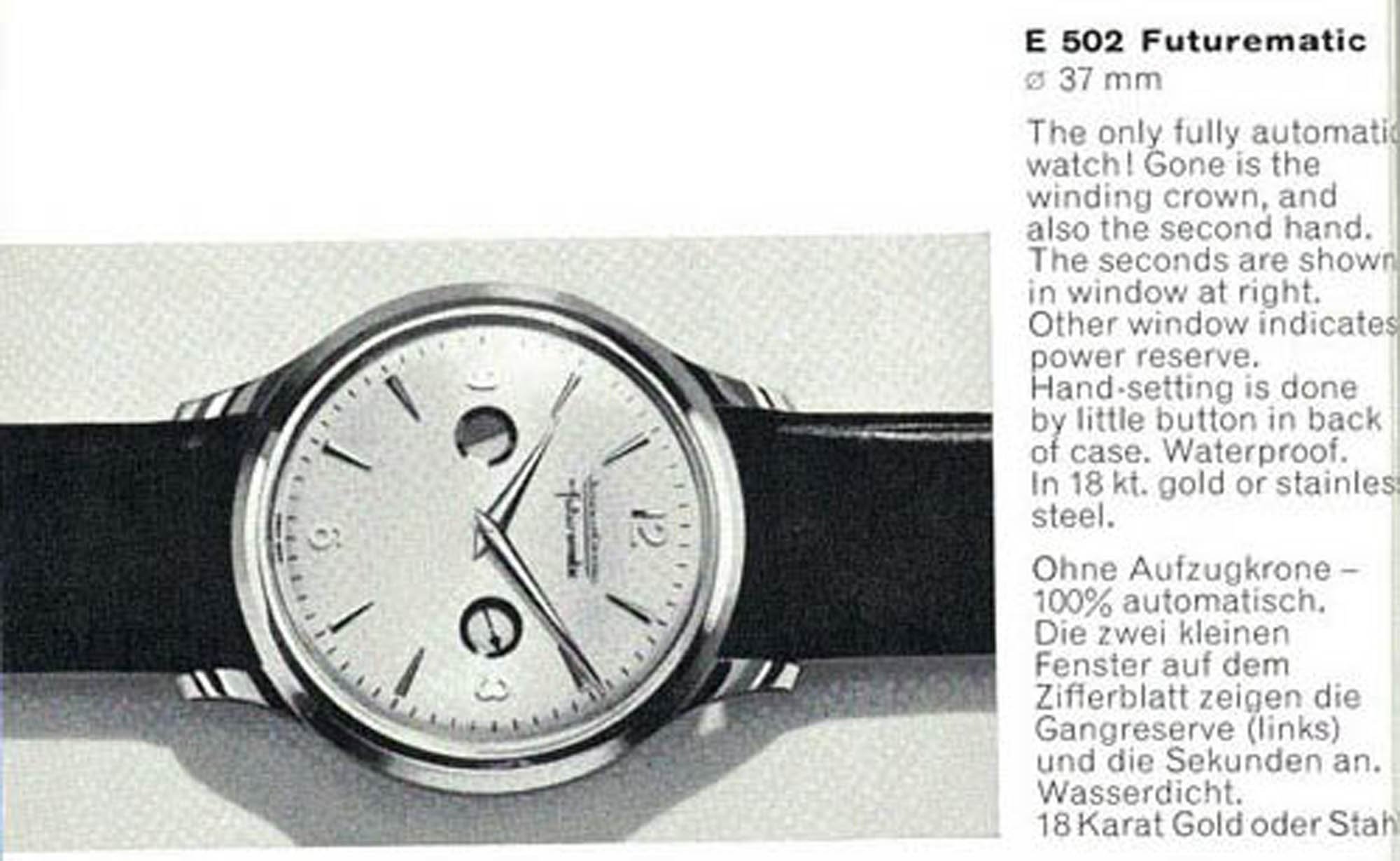 There’s an expressive power reserve indicator on the left, as you can see. I think you could opt for it in either blue or red, both changing to white to show you the remaining power reserve of your watch. The same-sized porthole on the other side features a long and thin black arrow across the whole white rotating disc. Not a major change in comparison to the classic second hand, but yet a completely new overall experience. If you are lucky, you might bump into an E502 version with four additional thin lines around the porthole. It breaks the symmetry and makes the porthole look like a target. 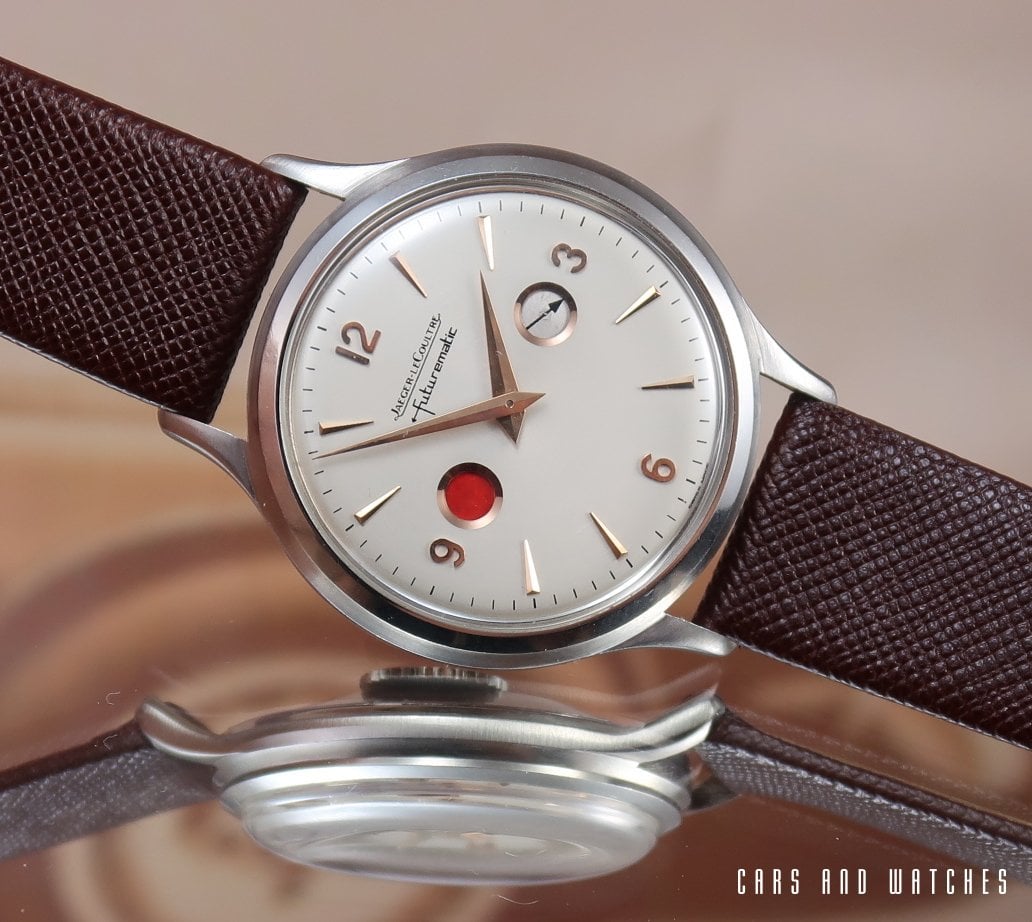 Speaking of symmetry here, the case hiding an automatic movement comes with a crown that is far from standard. Both Futurematic refs have the crown integrated on the case back. The engraved instructions on it only add extra charm. 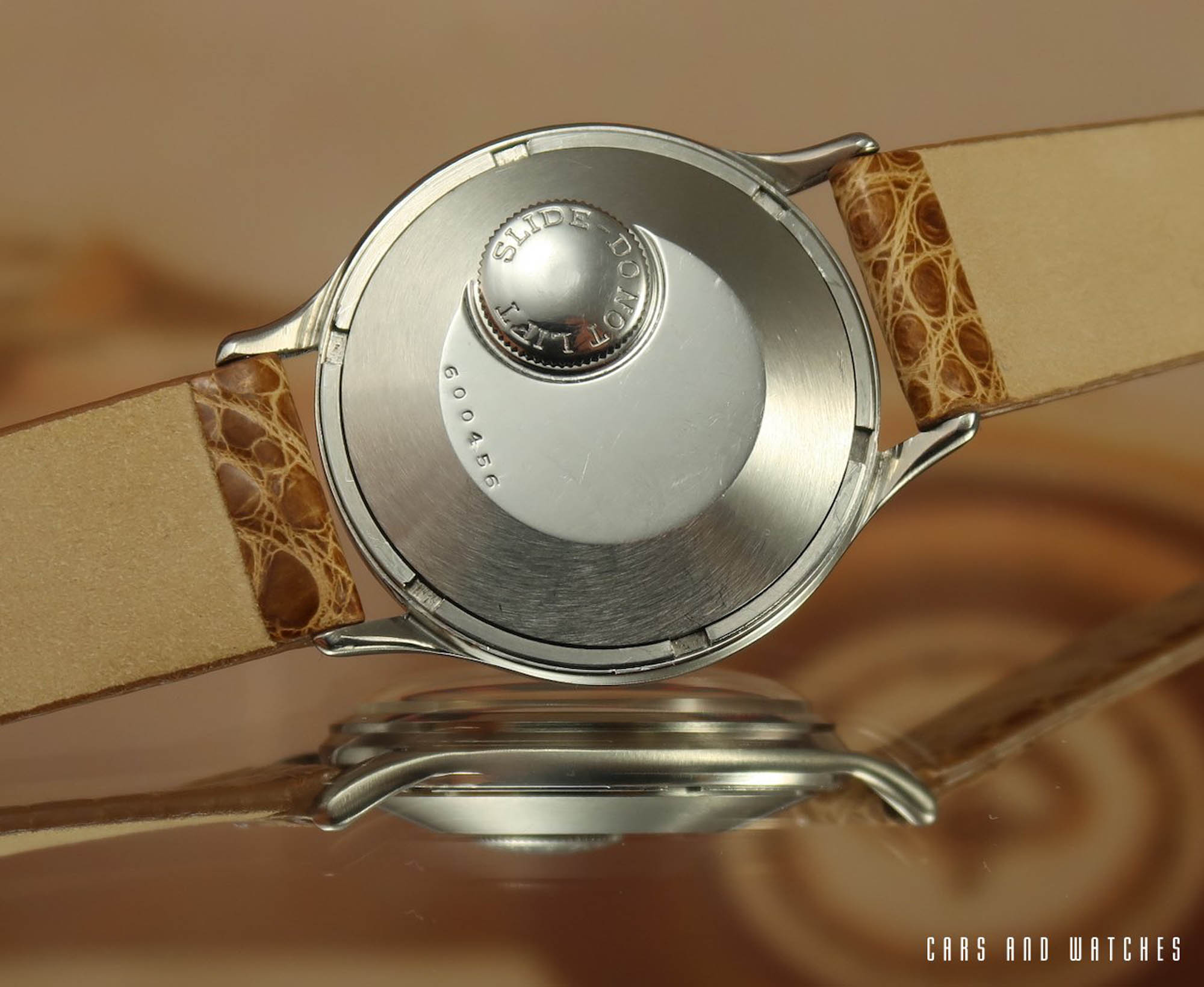 Two is fun, but three is a party! The last model up for inspiration also keeps the crown hidden on the case back. Similar to the Futurematic above, but this one is much more modest in terms of its budget. Meet the first European electric watch that was introduced in 1958, a year after the legendary Hamilton. 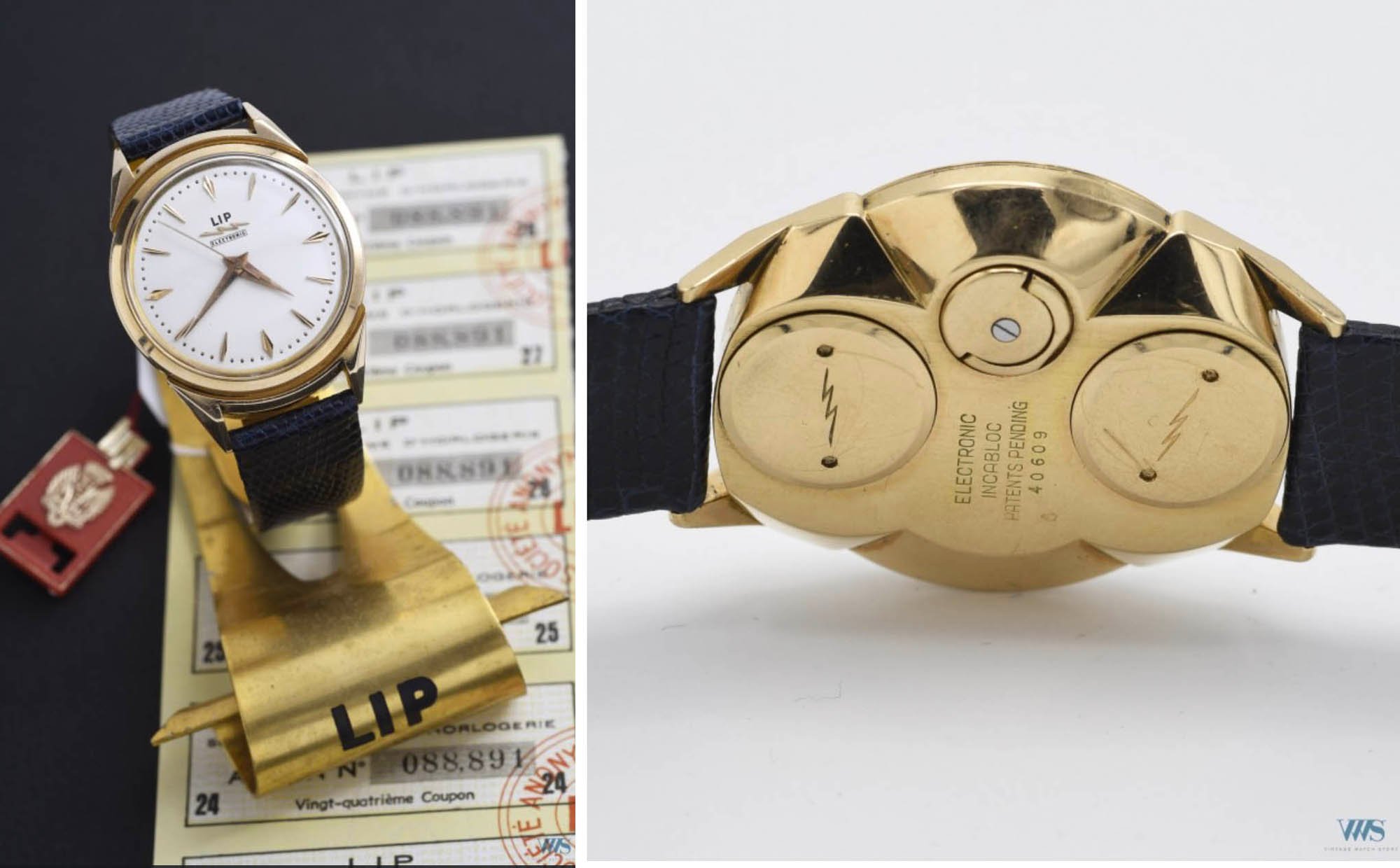 Meet the first European electric watch that was introduced in 1958

Most of you might be considering skipping this part, because we are all mechanical guys, right? I used to be the same until I got a particular book and started to read more on the early electric watches. The development of this French fellow began in 1948. It took the team a full ten years to get it to market. That’s what I call it determination. The ELECTRONIC name on the dial is only partially correct. The LIP R 27 contains a diode as an electronic component, but only to protect the contacts against sparking and it was not essential to the basic watch functions. 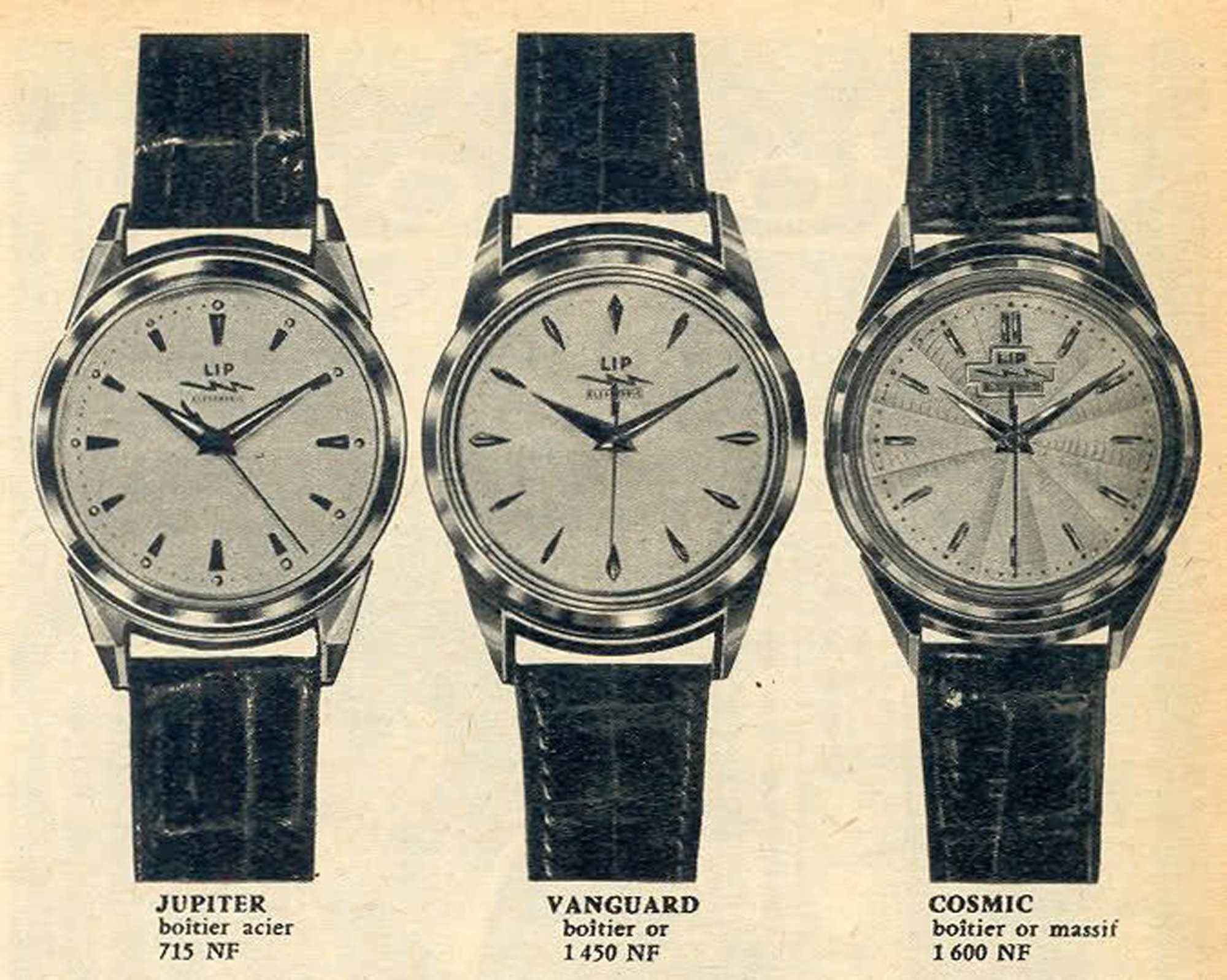 With only 7000 pieces ever produced, it has recently become a sought after model in particular circles. Recently, I stumbled across a nice full NOS set auctioned for 1500 Euros. If you feel like expanding your watch focus and knowledge, you can start by searching for the LIP R 27 in one of the three versions – Cosmic, Vanguard, and the Jupiter.