The Fast And The Fratelli: Omega Speedmaster Apollo 8 Versus Breitling Chronomat B01 42 “Frecce Tricolori”

It’s Omega versus Breitling — two major players in this last round before we go to the shoot-outs starting on December 1st. In the left track, we find a modern interpretation of the classic Speedmaster, the Dark Side of the Moon Apollo 8. It’s been praised for its use of ceramic materials and the beautiful, laser-ablated decoration of the movement. In the right track, we have the modern version of the iconic 1980s Chronomat, featuring the return of the rouleaux bracelet. 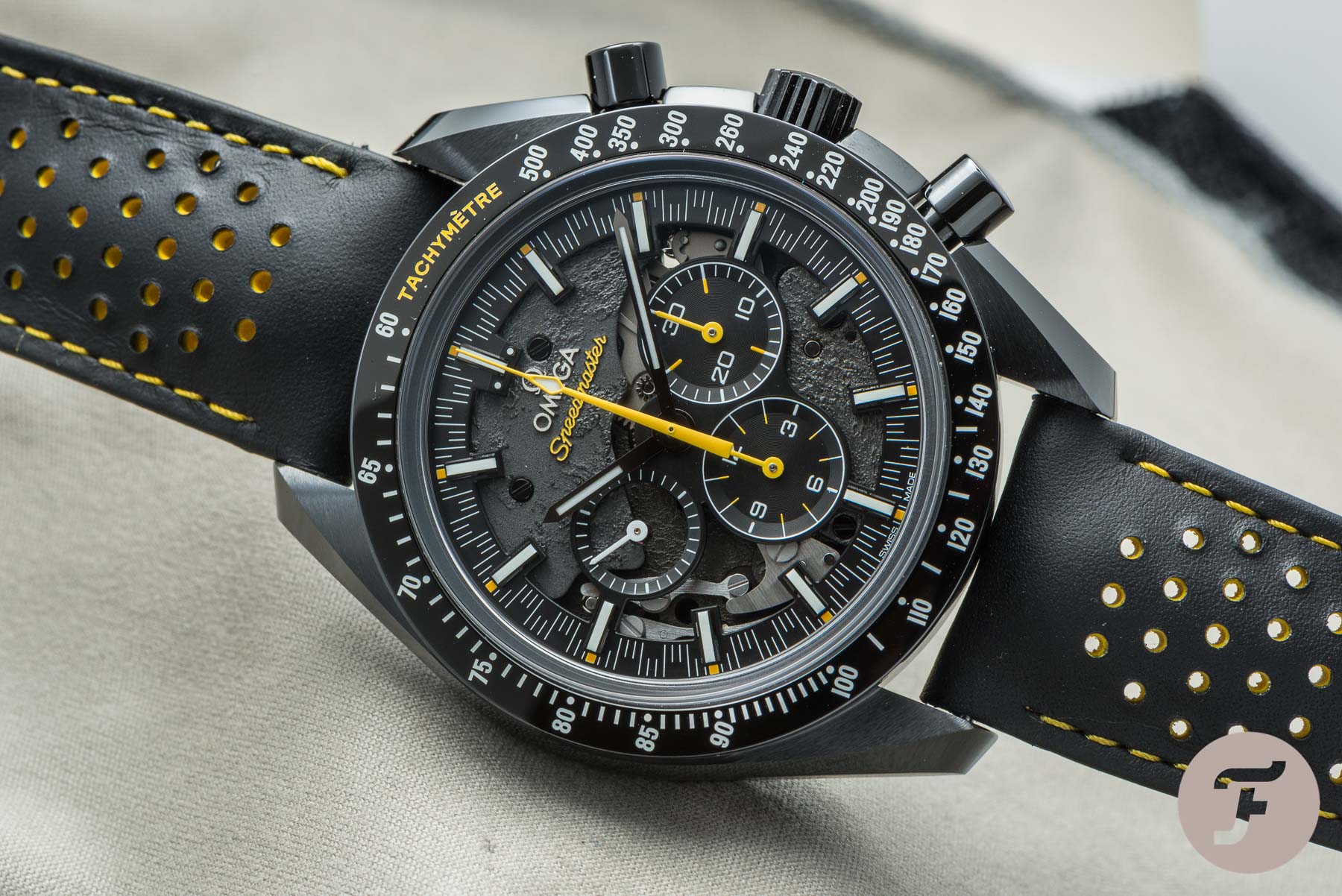 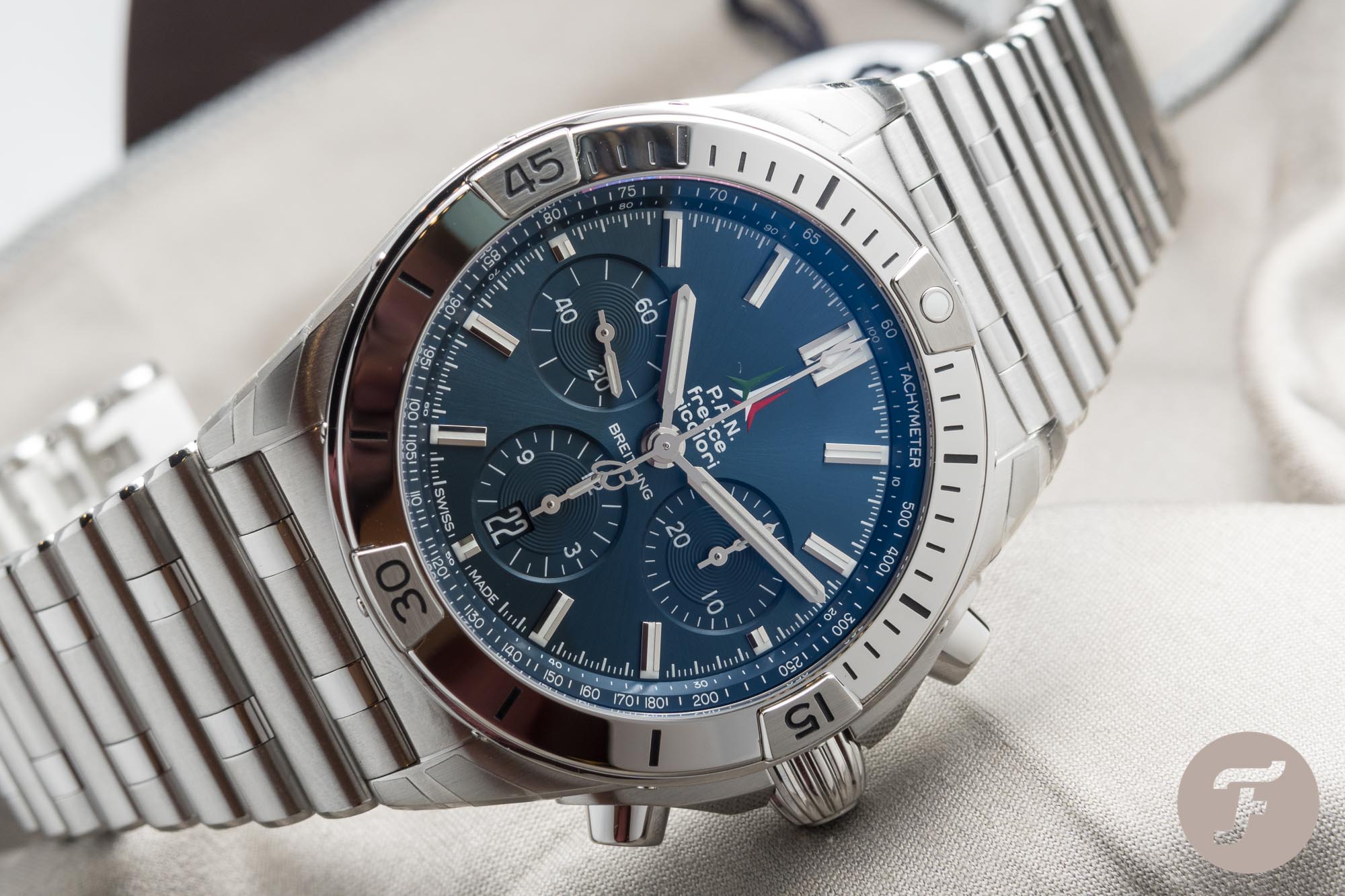 Where you expect the Breitling to be chunky, it is actually a modest 42mm. And where the classic size of the Speedmaster is normally 42mm, the Dark Side of the Moon Apollo 8 measures 44.25mm. This time, the roles are reversed! Let’s have a closer look at these watches. 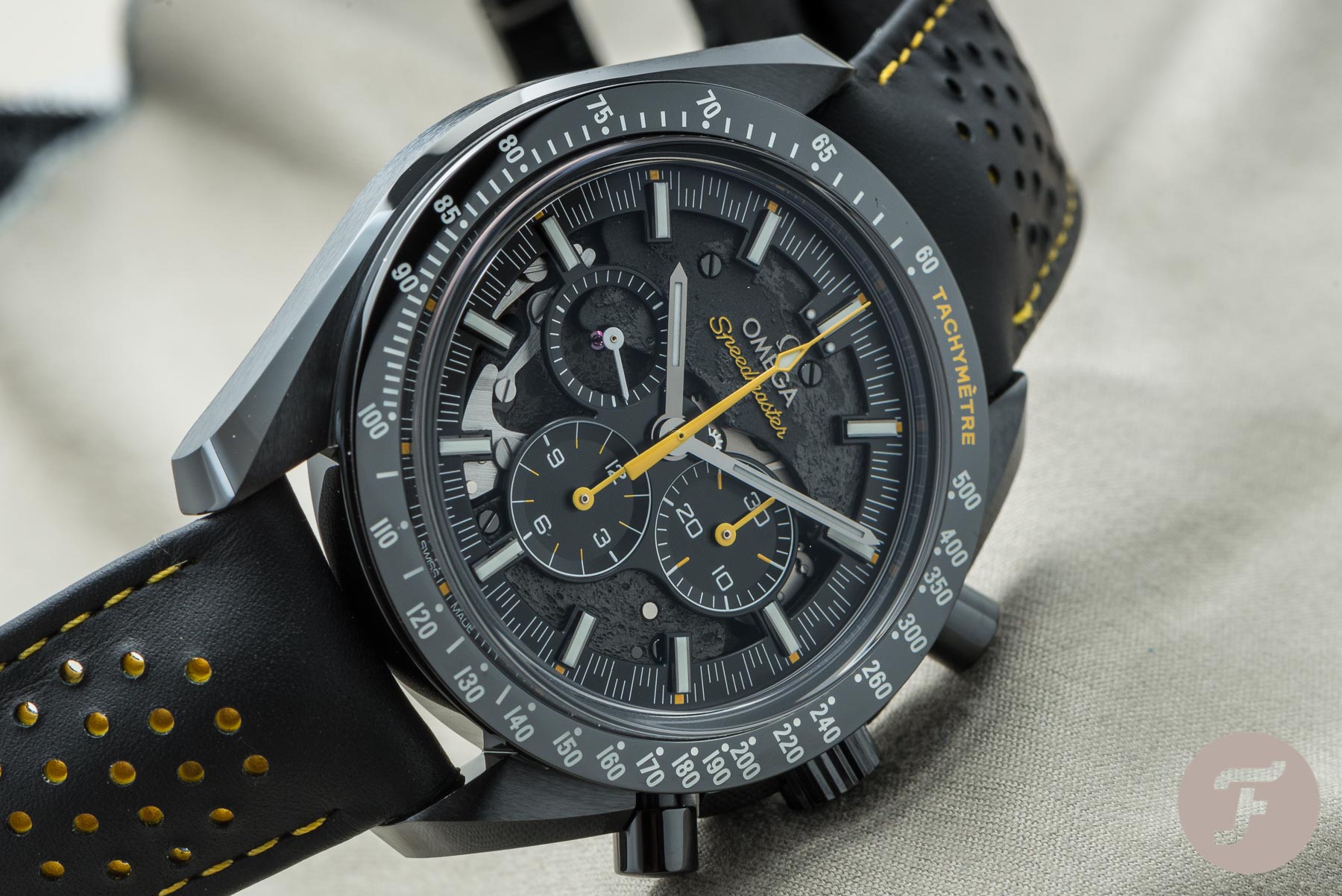 Omega Speedmaster Dark Side of the Moon Apollo 8

When Omega introduced the Dark Side of the Moon in 2013, I fell in love with it. And the weird thing is that this watch ticks a lot of boxes that I don’t want to be ticked. I am not particularly a fan of black watches, 44.25mm is a little bit too big for my taste, and I want my Speedmaster to be manually wound. 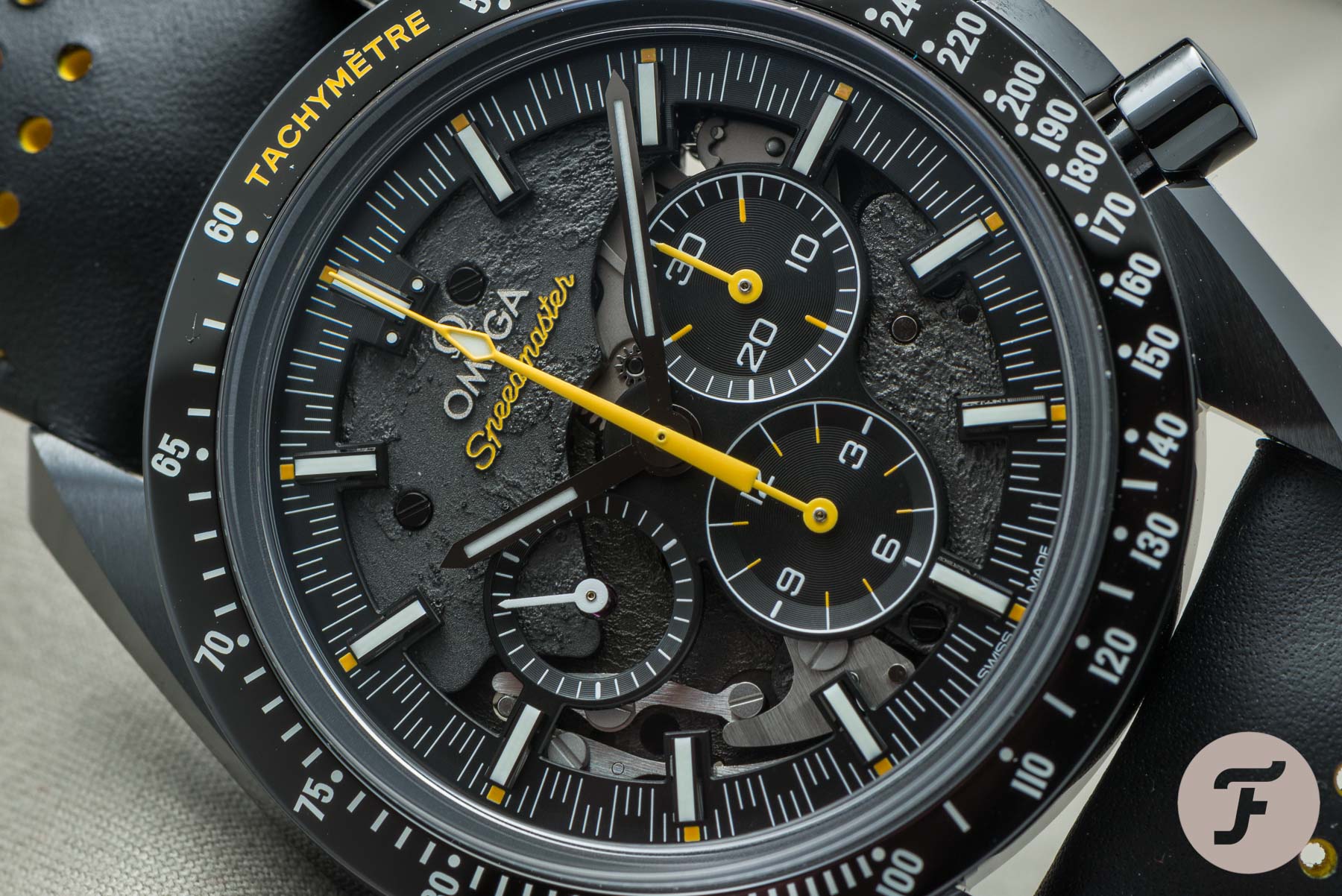 Specs are not always to be trusted

But the Omega Speedmaster Dark Side of the Moon watch was a prime example of how specifications can be deceiving! The in-house chronograph movement is beautiful and a joy to observe through the sapphire case back. The black ceramic is actually very easy on the eyes, and it makes the 44.25mm watch appear smaller on the wrist. Not only that, the lug-to-lug of the Dark Side of the Moon is 49mm, and that’s very acceptable on my wrist. 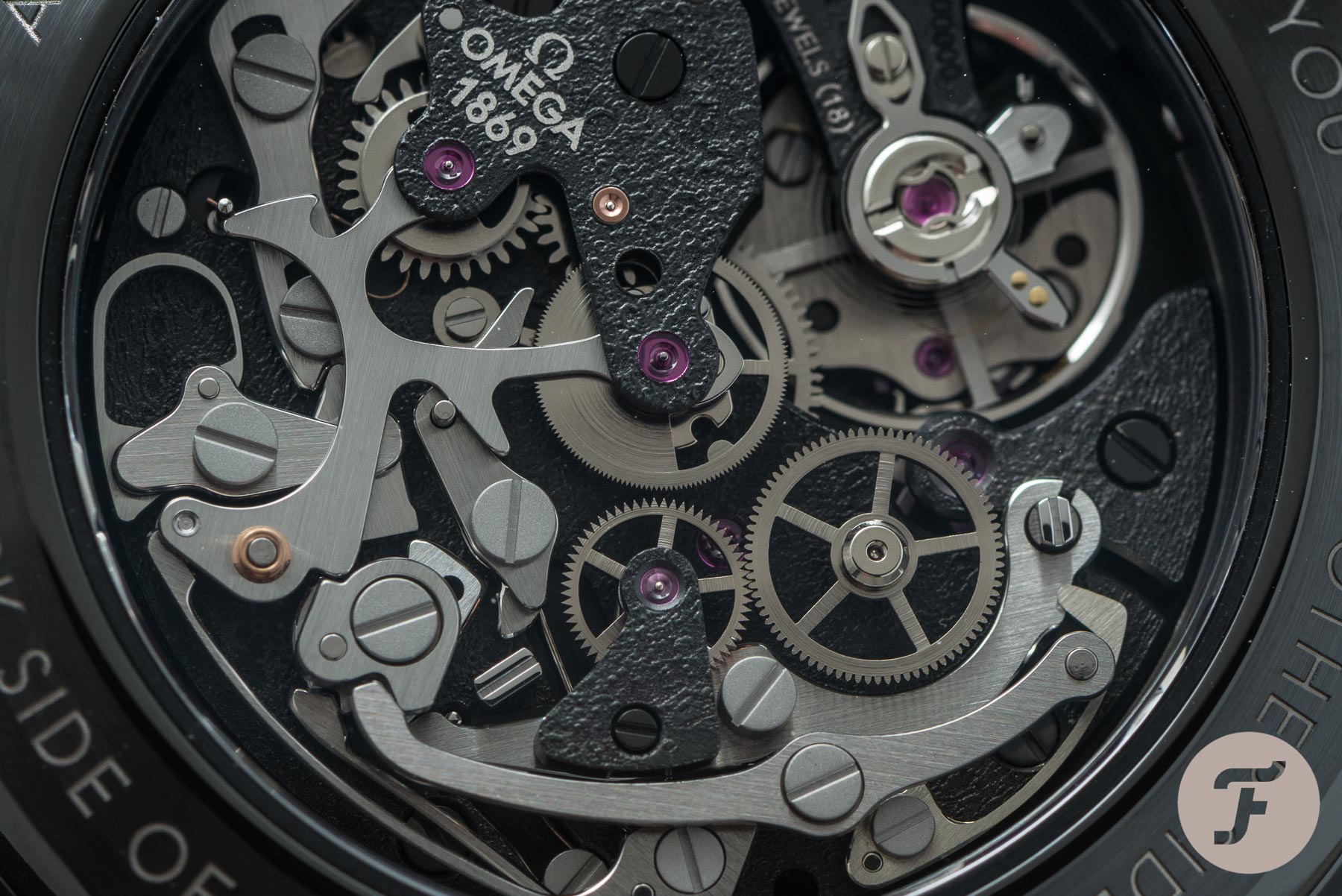 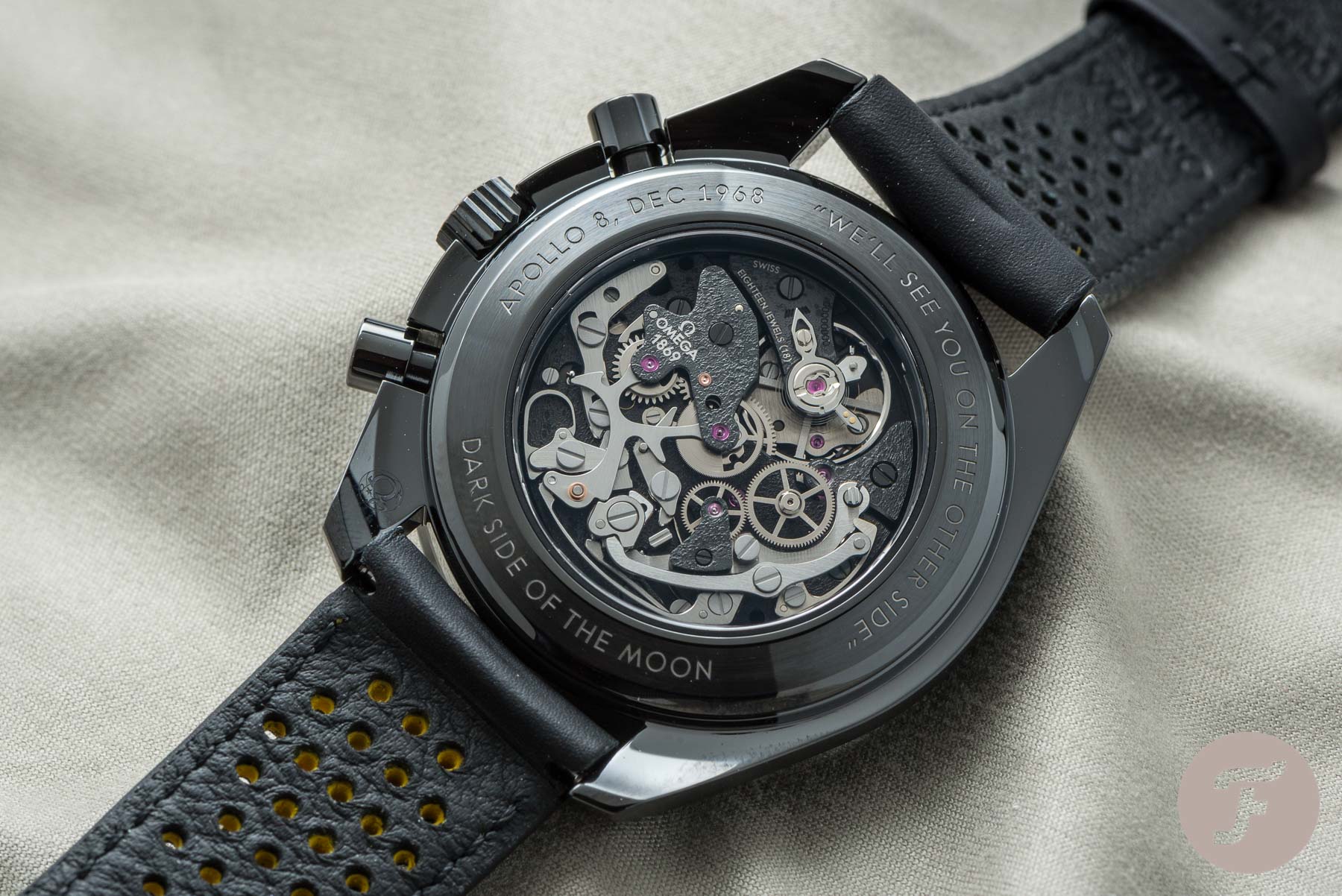 This Speedmaster Dark Side of the Moon Apollo 8 uses a hand-wound 1869 movement, which is based on caliber 1861. However, this time, it features beautiful decoration with a motif that looks like the surface of the Moon. Omega has used laser ablation to achieve this unique effect. The skeletonized dial also ensures that you will see big parts of this heavily decorated movement. 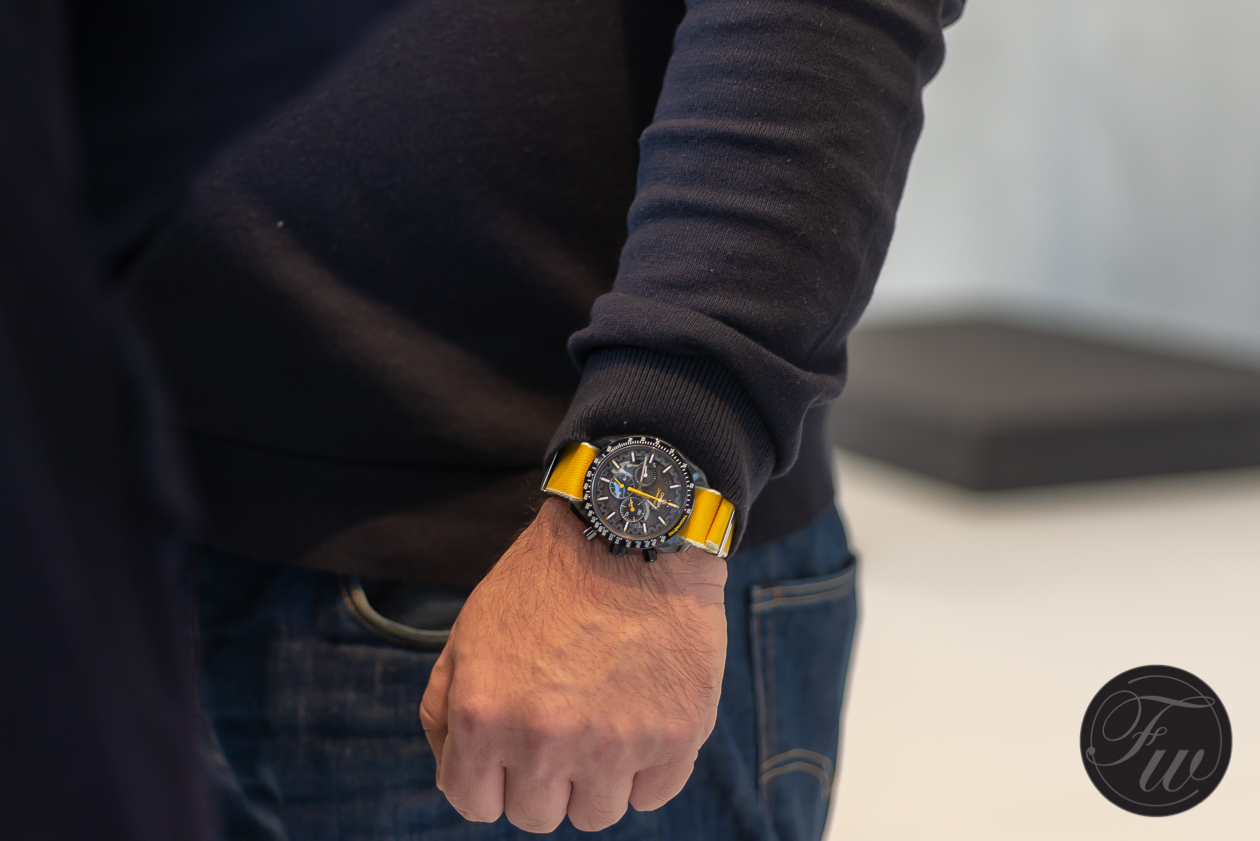 Racing to the moon

But what makes it a racing chronograph? Well, although a tribute to Apollo 8, it does have a tachymeter. It also meets all the other requirements in order to join this competition. It features a leather “racing strap” (because it’s perforated), and high contrast on the dial for perfect readability. The minute track also has the curbstone pattern, just like the Speedmaster Racing has. In total, we have four Speedmasters in the race here. But the Apollo 8 is definitely one of my favorite non-Moonwatch models. 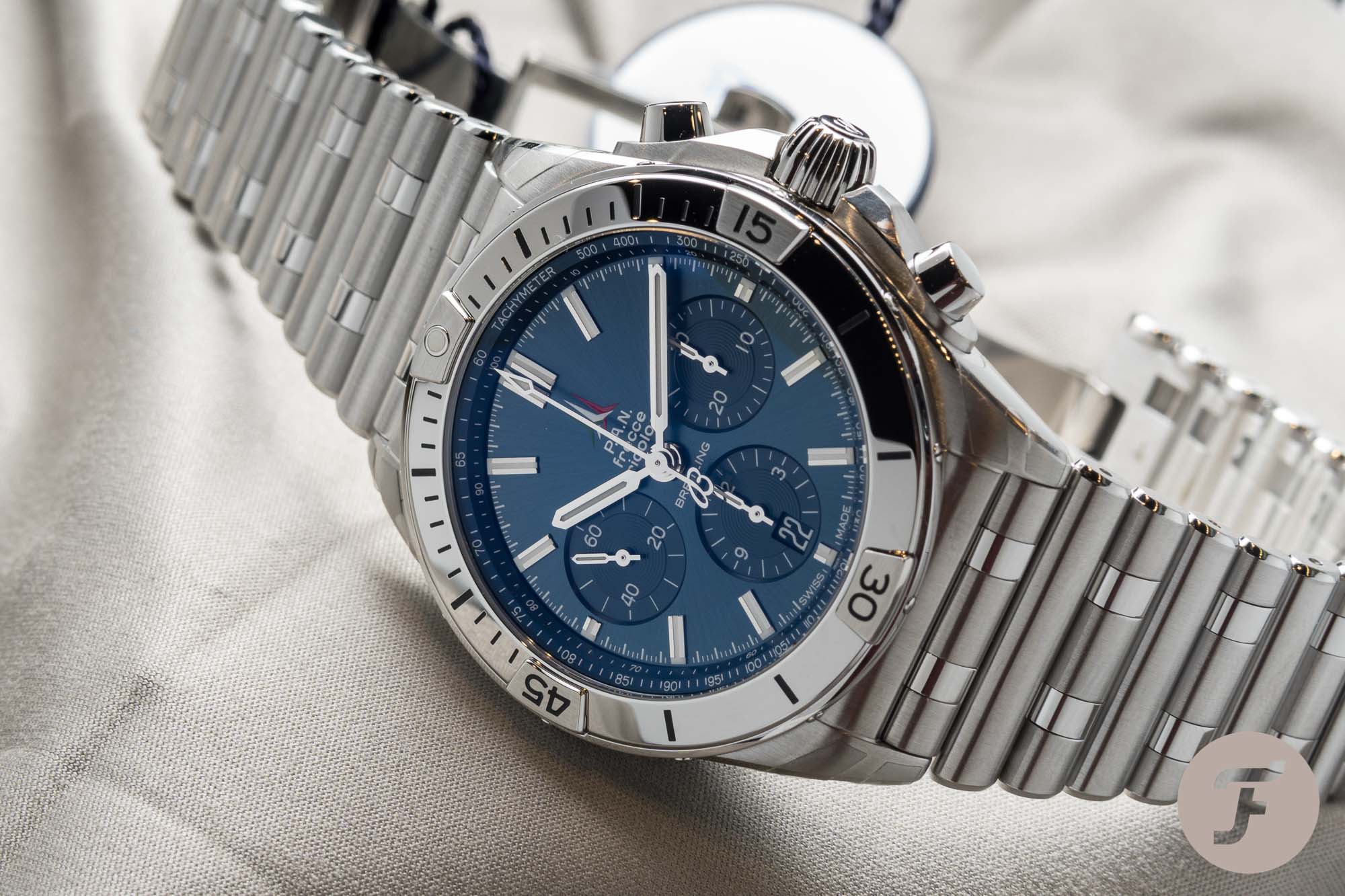 I am a big fan of the Seinfeld show, and Jerry Seinfeld has worn numerous Breitling watches. I always had a thing for the Breitling Chronomat ref. 81950 that he wore. One of the main attractions of that watch for me is the bullet (or “rouleaux”) bracelet. So I was happily surprised to see Breitling come up with a fresh interpretation of both the Chronomat B01 in 42mm and of the rouleaux bracelet itself. In my opinion, the nicest version that Breitling came up with is the “Frecce Tricolori”. 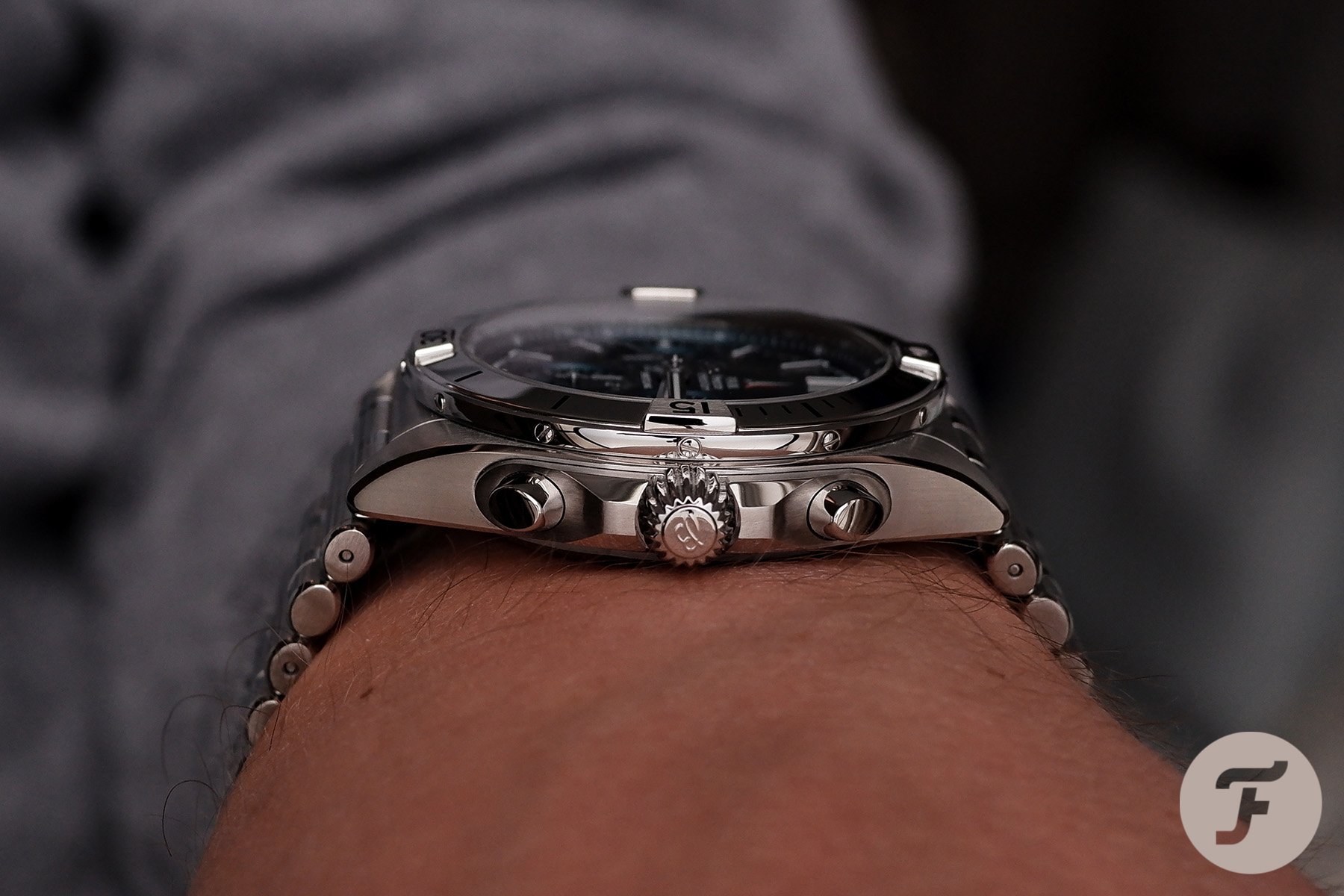 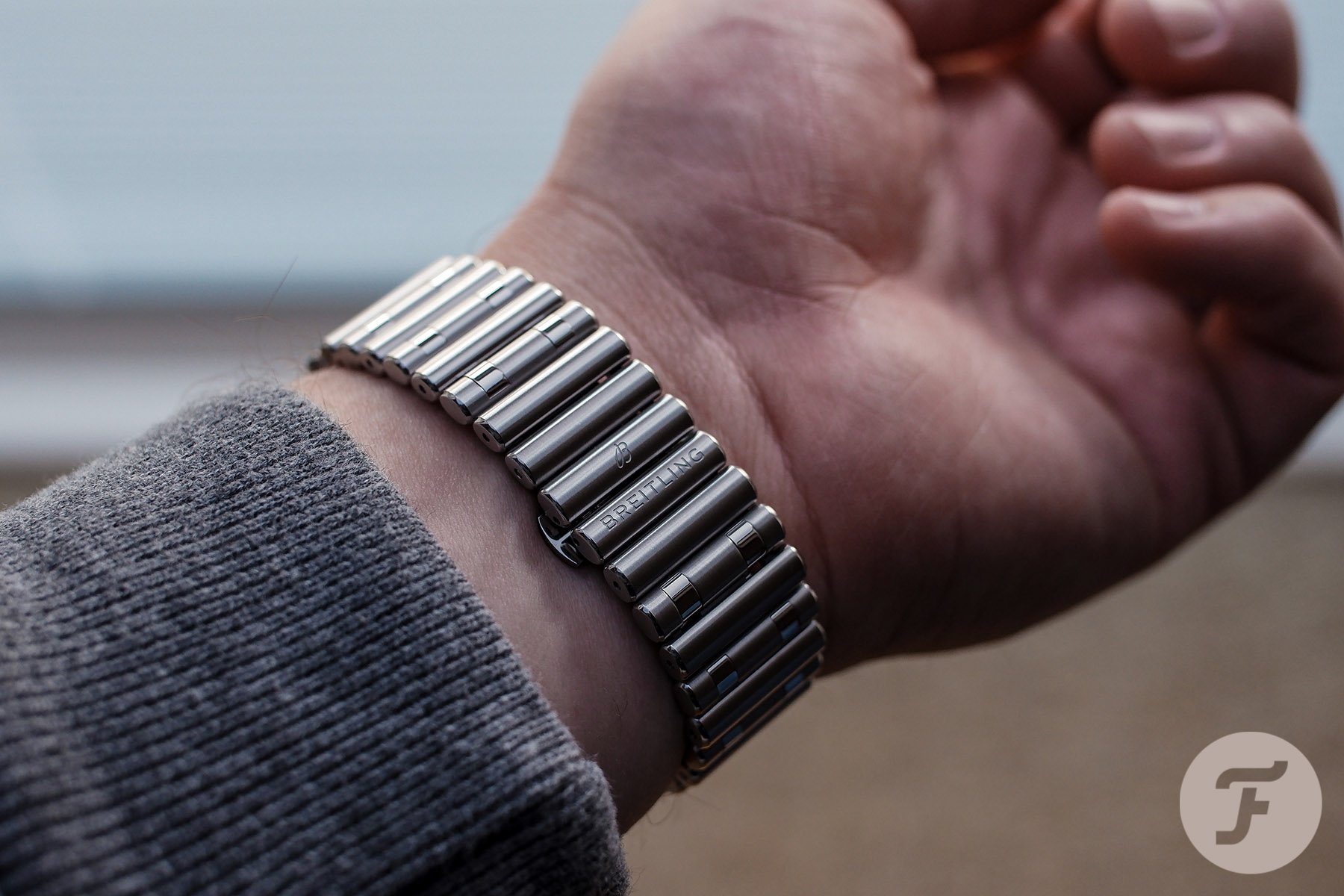 Ben went out and bought the “Frecce Tricolori” as soon as it came out in 2020, and not much later, he received one of the 250 pieces that Breitling created. One of the cool things about Breitling is that it makes sure the watches are available as soon as the official introduction takes place. We saw it recently again with the new Super AVI models. 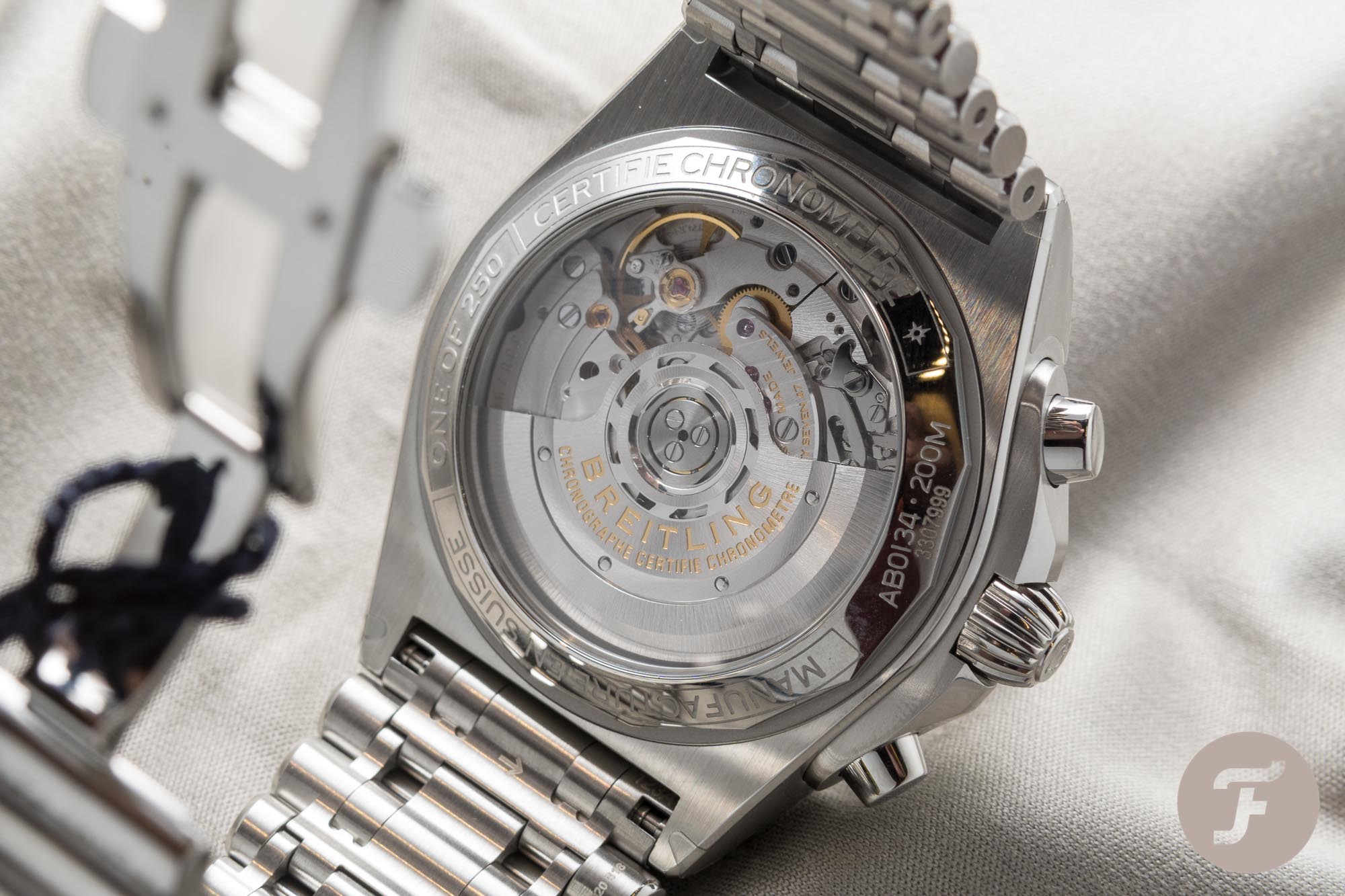 The Chronomat 42 “Frecce Tricolore” is a handsome watch, and it meets the requirements for The Fast And The Fratelli, including the presence of a tachymeter scale. Inside the watch ticks Breitling’s caliber B01, a column-wheel chronograph with 70 hours of power reserve. The association with car racing is also rather limited here, but it’s definitely a chronograph that will get the job done. You can read Ben’s article on his “Frecce Tricolore” here. 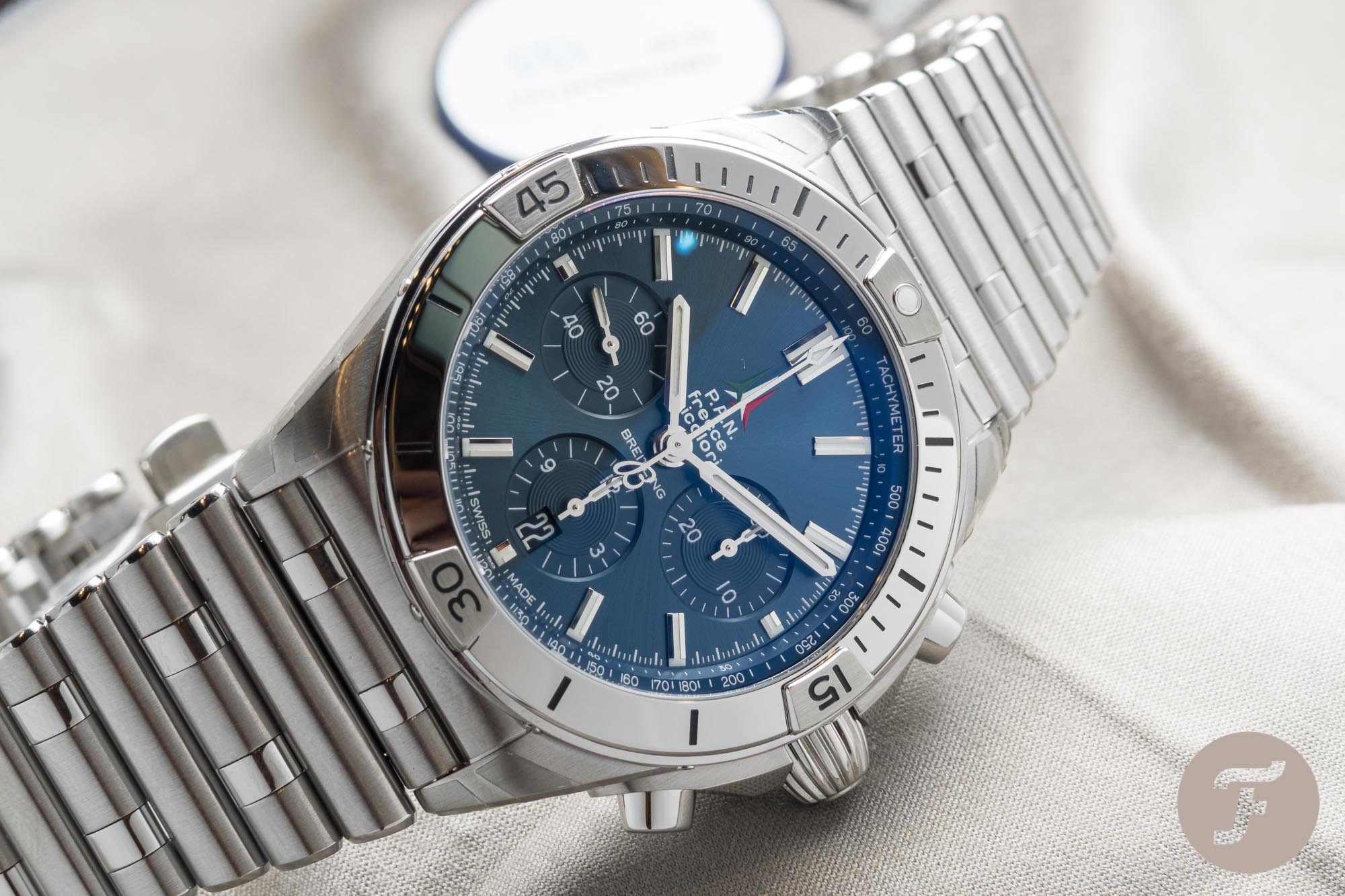 Now it is up to you

The Breitling and Omega are incredibly different, yet both are suitable for timing laps of the Traxxas RC car you could win. It all comes down to preferences, not only in design but also in functionality. The Speedmaster has a tachymeter outside the dial and places the visual focus on that. The Breitling has a tachymeter printed on the dial itself and focuses on the rotatable 60-minute scale bezel. The Breitling does offer more water resistance though (200 meters versus 50 meters), just in case you drive your RC car into the pond.